“Architecture is the creation of a special form of understanding of reality. It works and transforms reality through the construction of an important object of use. The object of this art form, on the other hand, has the dual quality of serve as a mirror and enhance it.
This understanding of reality that takes place through the creation of the architecture requires that the anatomy of it, as its substantial and spiritual structure, be understood as a whole “Kenzo Tange.

Until 1945, when it was destroyed by an air raid during World War II, Tokyo was the cathedral of Gothic style and wood. Founded in 1899 as a chapel for French students of the Seminary of Missionaries, in 1900 became the parish church of Sekiguchi.

In 1960 the architect Kenzo Tange won the tender for reconstruction work began in 1961 within the 15,098 square feet comprising the entire area of the Episcopal Diocese of Tokyo and ending in 1964.

Due to the infiltration of rainwater through the years, the bolts fixing the outer steel sheets have been rusting ido, allowing strong winds or typhoons, so common in this zone were dropping, some carrying and in other cases causing high risk of causing serious accidents.

Taisei Construction Co. along with and support of Tange Associates in 2007 began the restoration of all parties, mainly the roof that offered a further deterioration. With a scaffolding around the cathedral and a giant crane was dismissed the original stainless steel cladding to be replaced by others assembled with a special technique that does not allow any seepage after waterproofing the walls that were placed on the armor shielding Zinc 25mm impermeable cement.

The skylight of the roof was also replaced by an aluminum frame and tempered glass, creating a more affordable so that engineers can perform the necessary inspections.

Following his term “metabolism”, designed the cathedral as a living entity that should transcend beyond the borders of Japan to become an architecture used for all peoples, combining technology and humanity, rising above the mundane and inspiration for getting construction in many of the Gothic churches that Tange visited on that occasion.

Spaces and doors made with its high walls deviate from the model of Japanese temple, close to design a much more international diamond volume, although the skirts of the roofs may have evoked some of the traditional Japanese architecture and Buddhist temples or Zionists, with spacious roof falls.

Secondary buildings contrast with the main building in their ways, they are rectangular and are joined to it by roads and platforms.

In the basement of 1005.5 square meters, there is a small chapel that can accommodate 200 seated and 100 standing, in addition to numerous services relating to the activities of the temple.

On a concrete base shaped like a Latin cross walls rise high reaffirming the design of the plant and which are deployed eight hyperbolic parables that support the roof of the cathedral and leading to four main facades. The structure consists of eight curved panels together and upright almost vertically.

The roof, windows with skylights, a large cross shape and is the only place where the temple receives natural light, while it extends to the ends of the cross, reaching the ground as skirts, design that is appreciated better from the outside.

The exterior surfaces of the cathedral are lined with sheets of galvanized aluminum and stainless steel frames and supported by iron bolts, while the back wall of reinforced concrete to be in sight, feature the works of the architect.

By skylight where the only natural light received by the temple are closed by glass and above the main door are two wooden walls that frame windows 4 amber or ocher tone.

Both the music of the altar as plate 17 meters high that serves as background to The Holly Cross are of Italian marble.

Pictures during the restoration 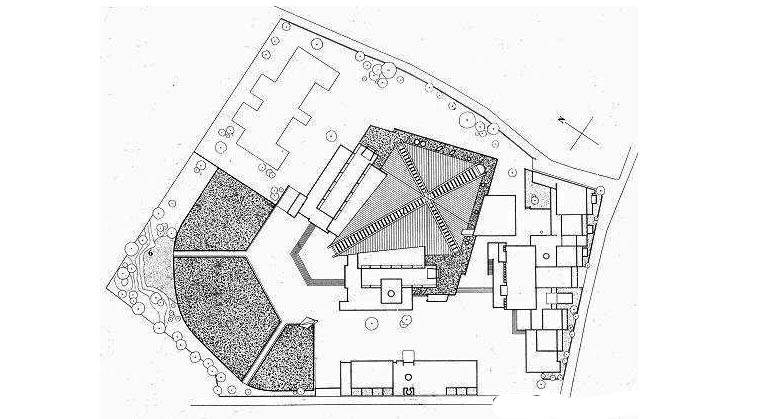 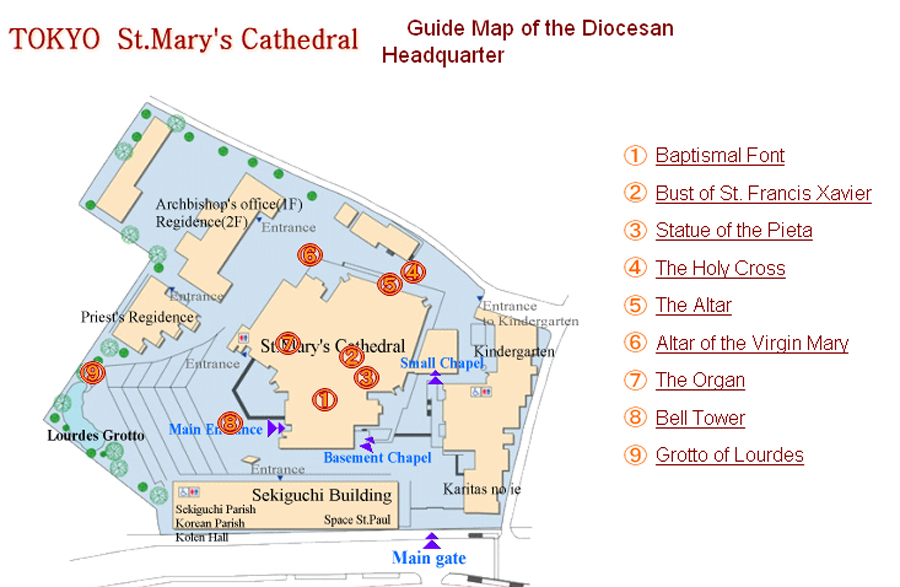 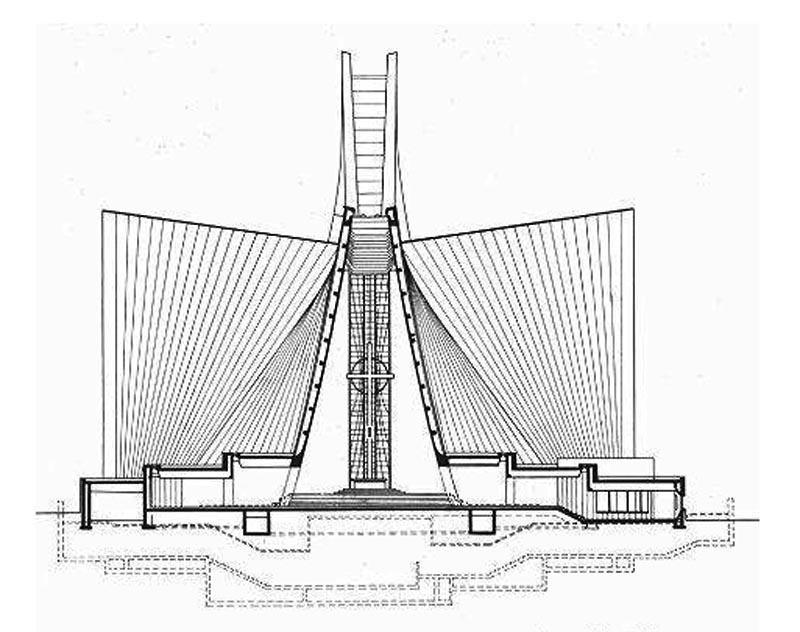 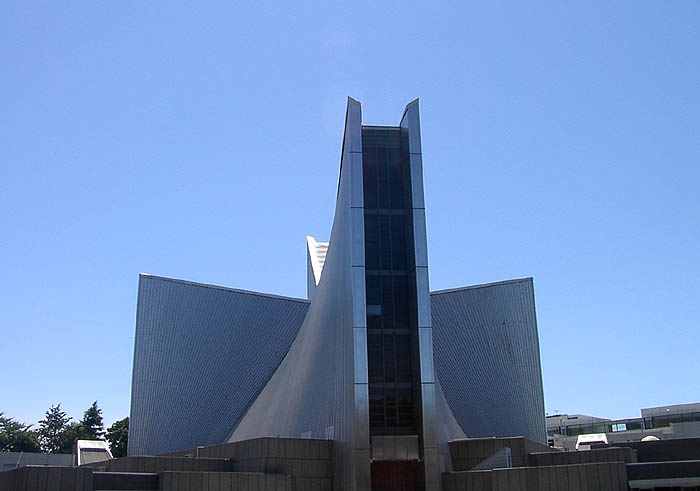 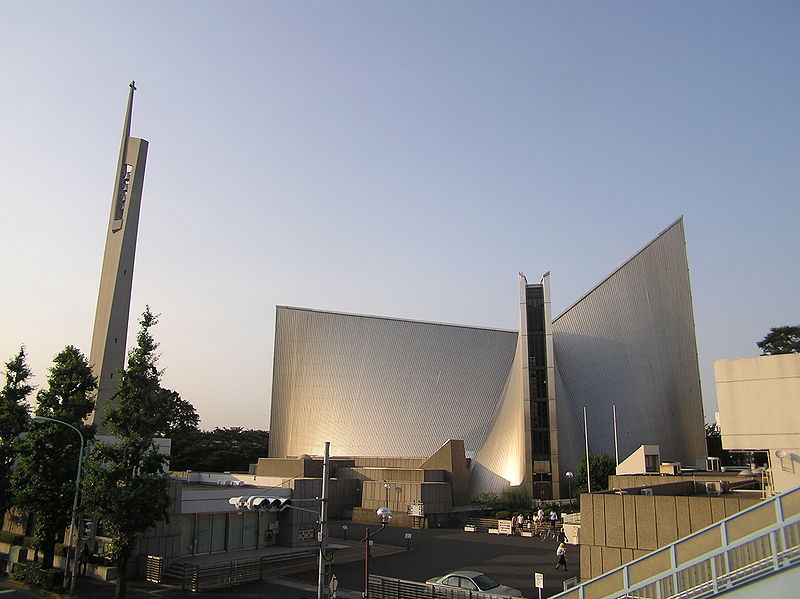 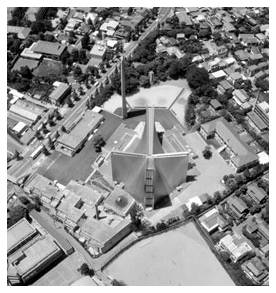 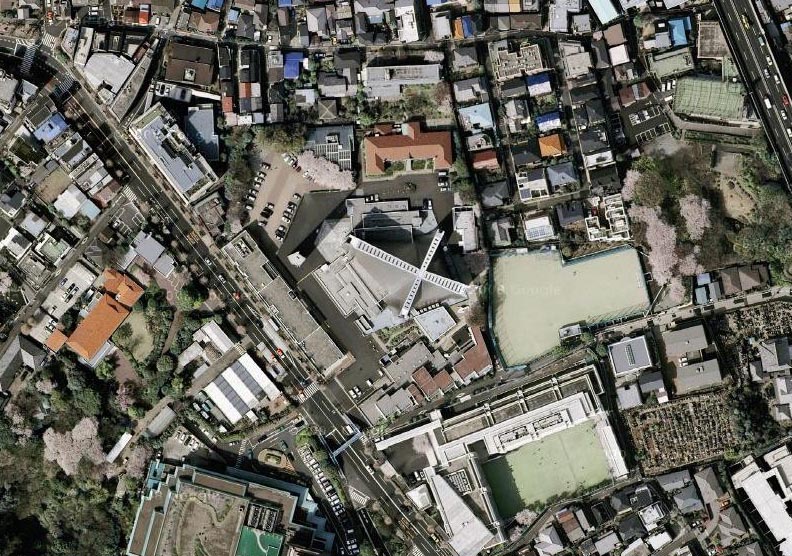 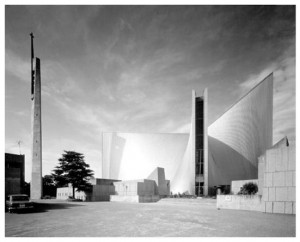 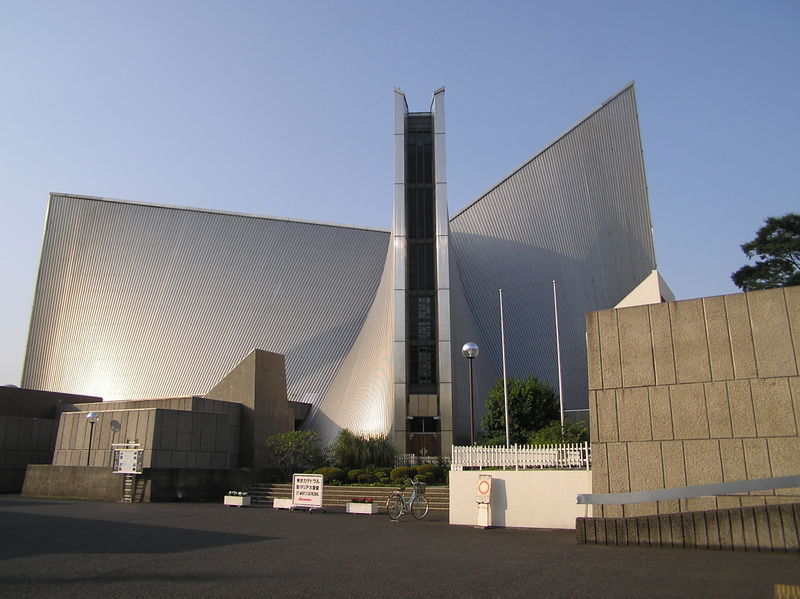 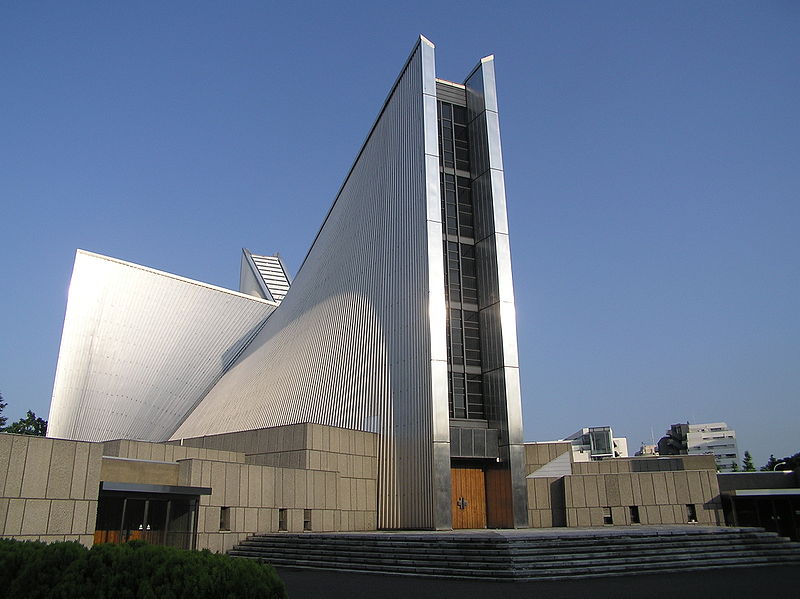 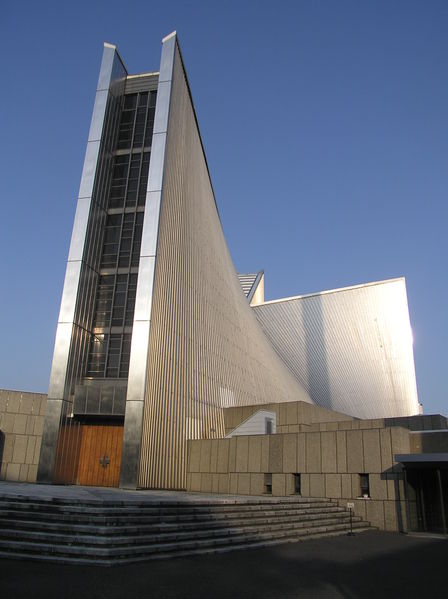 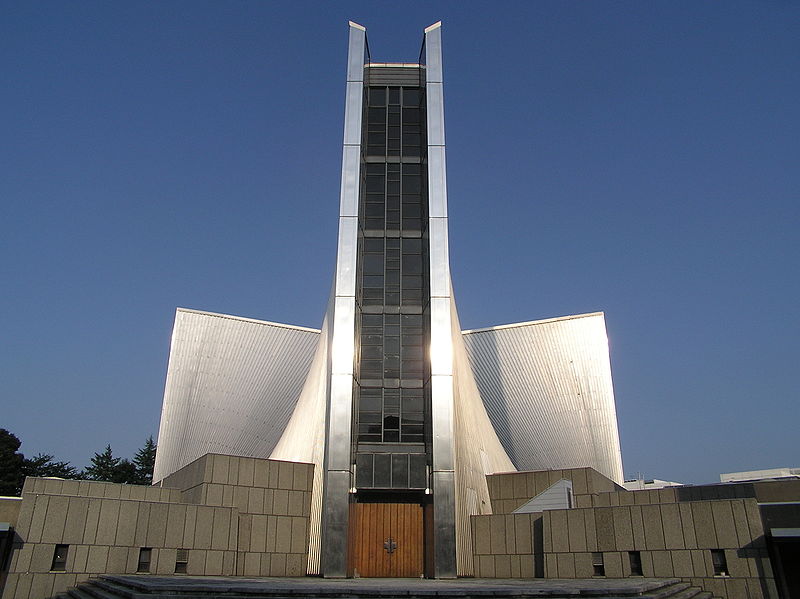 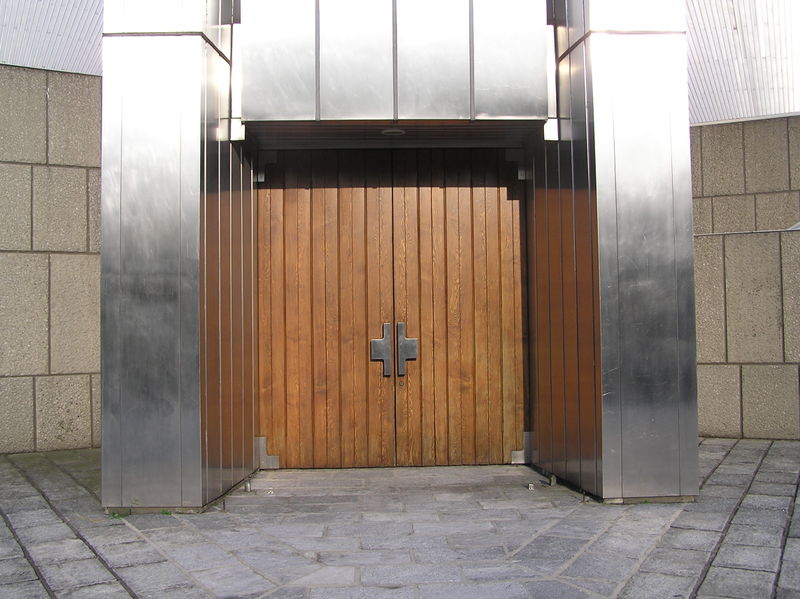 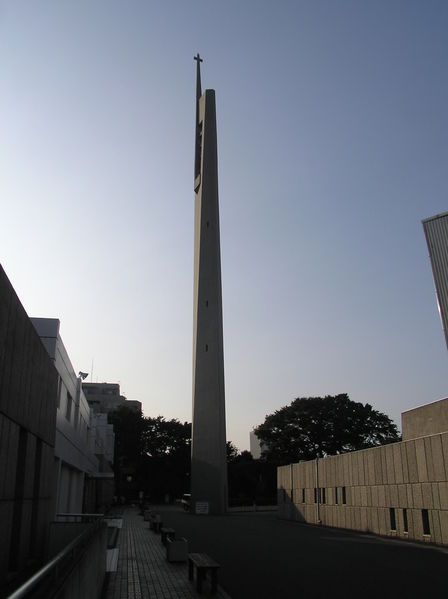 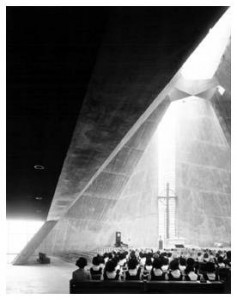 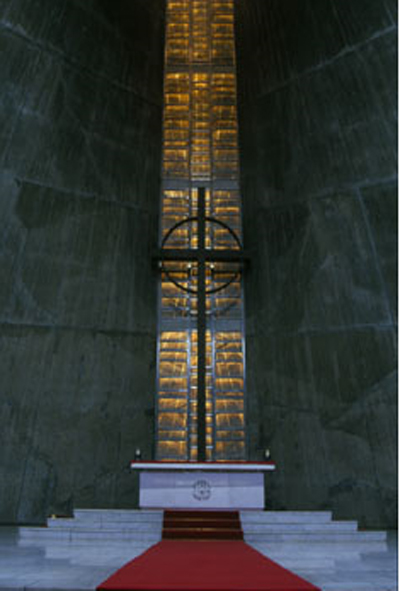 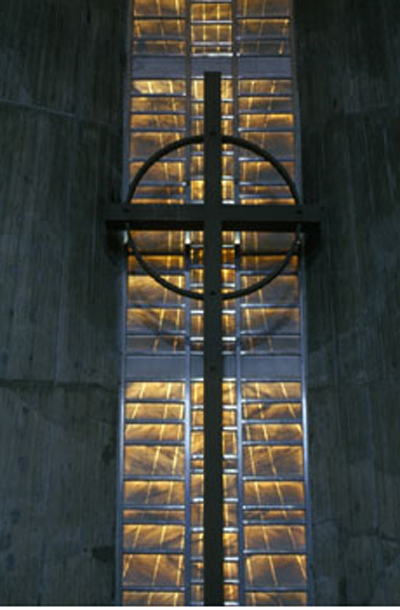 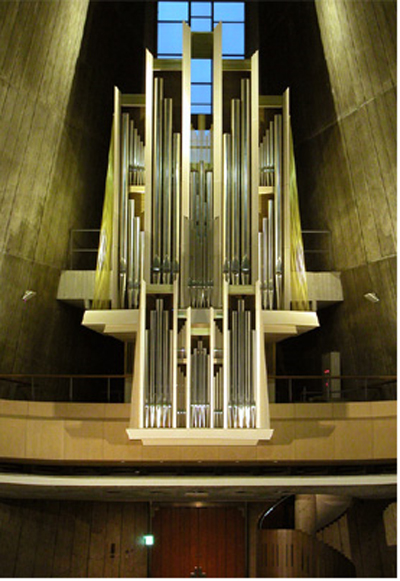 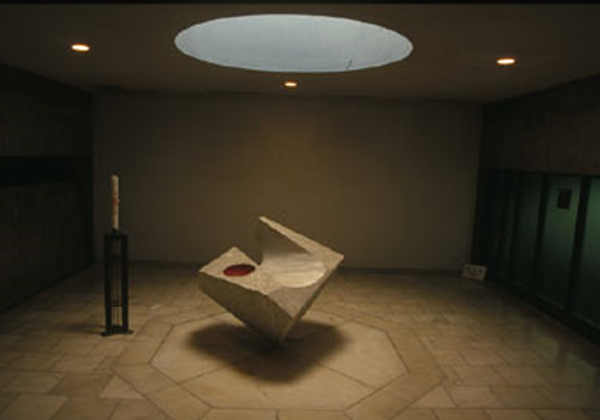 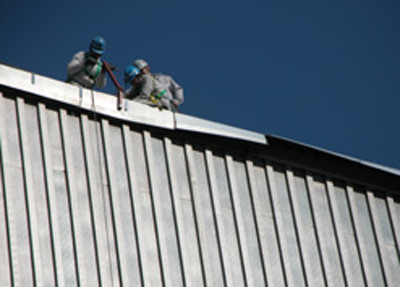 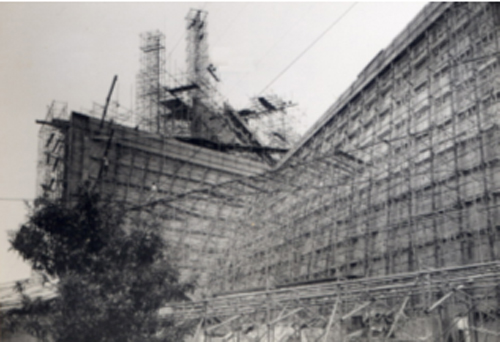 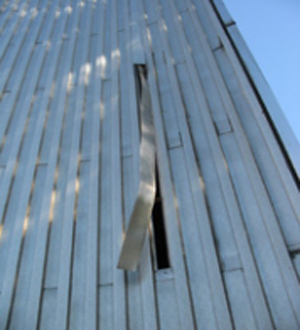 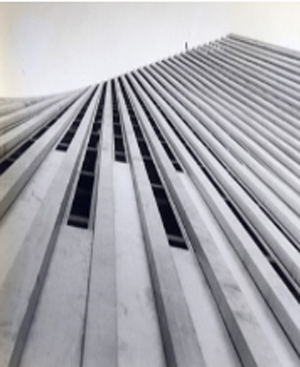 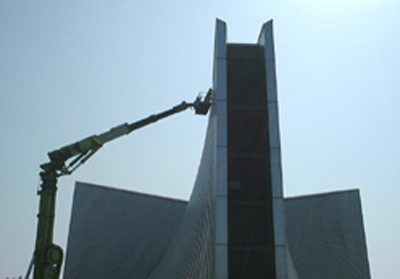 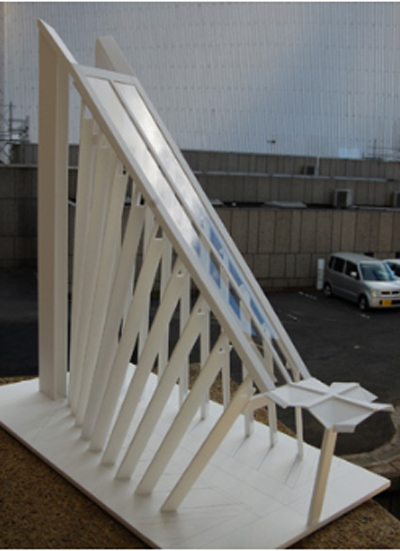