The journey and history of the Church Saint-Jean de Montmartre has been laborious and fraught with difficulties. The Abate Sobaux, cure St Pierre de Montmartre, watching from atop its hill like the district expanded, felt the need to build halfway between Montmartre and the “boulevards”, a parish that would meet the needs of the growing population.

The church of Saint-Jean de Montmartre is located at 19 rue des Abbesses in the 18th arrondissement (Montmartre) in Paris, France.

The Church Saint-Jean de Montmartre, born of passionate encounter of two exceptional people, free thinker architect Anatole De Baudot and the Abbe Sobaux who knew permeate your thoughts and find a primary goal for its construction, approach the men of the time materials used for construction of the time, materials born with the Industrial Revolution.

Abate’s first concern was to build a church closer to the town of Butte and talk to them about God in a contemporary architectural environment. He accepted the project of architect Anatole de Baudot both for its innovative qualities as for its commitment to economic issues in construction.

For Anatole de Baudot, reinforced concrete architecture offered the chance to return to top structural unit, abandoned after the Atigüedad, and present a great advantage, in their eyes, the gap between “rich or poor architecture” so remarkable in the stone buildings, returning to architecture its true construction paper and not just decoration.

From the outside, it is a curious mixture of Byzantine and Art Deco, whereas if you look from the back you might think that is a factory, with its brick wall.

On a small, uneven ground surface 44 meters long and 20 meters wide, with a height of 30.5 meters from the ground up flashlight church was built.

The plant is deceptively simple: a bell tower, a nave flanked by three smaller chapels for ships and a plane that reads like cruise. In change in elevation, the relationship between batteries structural columns and arches of the chapels, presents a series of three square sections, separated by two small rectangular openings. These square bays are surmounted by three domes in the nave and finished with a small bell.

Anatole de Baudot, pupil of Viollet Le Duc and Labrouste, influenced by the Universal Exhibition of 1900, creates an architecture style of oriental art. Very interested in architecture closely linked to industrial development, no doubt using reinforced concrete for the first time in the history of the construction of a church, allowing you to build walls thin and why this church occupies a special place in the history of architecture.

Baudot done an exceptional architecture and difficult due to several reasons:

The altar is decorated by Baudot concrete and stoneware Bigot. Its decoration is enriched by a mosaic attributed to Giraud and medallions made by the sculptor Pierre Roche, representing the symbols of the Evangelists: Matthew and the Angel, San Lucas and Taurus, San Marcos and the Lion, San Juan and Eagle.

The baptismal Stone was made by the goldsmith Goudji is Montijou stone, quarry near Blois, bronze, silver and jasper.

The windows of Saint-Jean de Montmartre are a nice figurative whole and are the most prominent of those in the twentieth century in the French capital. Except for the large stained glass window depicting the Crucifixion and that is the work of Tournel and Sons, others are attributed to the glaziers Jac Calland, from cartoons and sketches of Pascal Blanchard representing passages of Revelation (the knights, the four beasts and four living, lamb and the book of the seven seals) and the Gospel (the multiplication of the loaves, the adulterous woman, the resurrection of St. Lazarus). Around the church there are 48 smaller curved windows illustrating the litanies.

White marble sculptures are the work of Gueniot (1916). The two angels that hold the baptismal font are carved, each in a single block of Carrara marble weighing 1,800 kgs.

In 1926 the two low reliefs depicting the Sacred Heart and John the Evangelist were performed. Also in white marble medallion with the image of the Abbe Sobaux was carved.

The bronze sculptures are the work of Pierre Roche. At the entrance sculpture depicting two angels and San Juan holding a cup under test venom from the bite of a snake, illustrating the last sentence of the Gospel of Mark is located:….. “Behold the sign that will accompany those who have believed in my name… they..tomarán snakes in their hands, and drink deadly poison without harm “….

It was planned that the illustrations in the writings of St. John, the four Gospels and Revelation cubriesen almost every wall, but financial difficulties and the Great War did not possible. Those pillars decorated with vine leaves and branches are executed with the technique of “template”. In the area of ​​the choir two paintings executed between 1914-1918 are observed.

The organ dates from 1860 and is designed and built by Cavaillé-Coll, 6 enclosing a carillon bells.

Baudot was not quite agree with much of the architecture of the nineteenth century, calling it “simulation architecture” where the structures used to create the building were generally hidden behind the columns and decorations.

In collaboration with engineer Paul Cottancin, Baudot discovered a way to build a new type of structure, light and easy to carry. The framework for reinforced concrete construction would be using decorative bricks, insulation and additional support. The technique was so revolutionary that people refused to accept that was sufficiently robust and construction was halted for several years while the necessary tests were performed. To Baudot axis that dominates his way of building is “unit structure” that allows subordinate the design principle all building functions: carpeting, decoration, spatial organization and services.

When structural works were completed in 1904, the reactions and reviews were mixed. It was the first modern religious building constructed in the city that many seemed dark and austere. Today you can admire the engineering and experimentation with new materials, as well as the techniques used to build up a steep hillside.

Baudot up 26 concrete columns 12 meters buried in the ground, with 50cm diameter and 25 meters high, above them a dome composed of three square planes covered by three domes reinforced concrete 7 cm thick and coated plates copper. In its inner side, these plates are coated with plaster to be decorated.

The top plate forms the outer roof of the church. A mixture of cork and “blast furnace slag” serve as sound and thermal insulation incorporated between the two plates.

The walls of any load and could be dispensed with without compromising the solidity of the whole. The galleries avoid possible deformations of the building.

To raise the walls Baudot chose the system created by Paul Cottancin that uses thin reinforced concrete slabs reinforced with ribs as buttresses for the horizontal pieces and traversed with iron rods for vertical bricks. These two parts joined together by cement which serves as a link between the hollow bricks form a true indestructible monolith.
The provision, therefore, the church is the result of design made for its construction: a combination of columns, with the walls as filler without any load. The building is made from a single block of homogeneous material and perforated.

The facade is decorated with medallions flambéed stoneware technique used by modern industry, which together with brick view exhibit a characteristic structure of Art Nouveau design. These medallions made in the workshop of Alexandre Bigot, are applied directly to wet cement. They are also used to decorate the altar and the tribune. 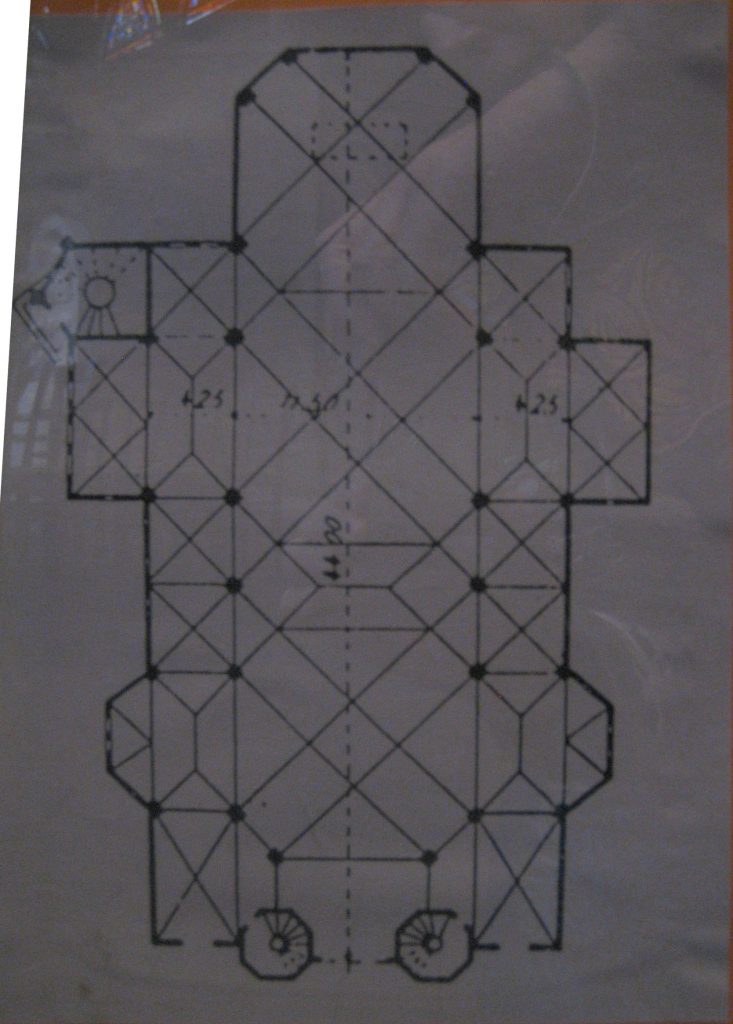 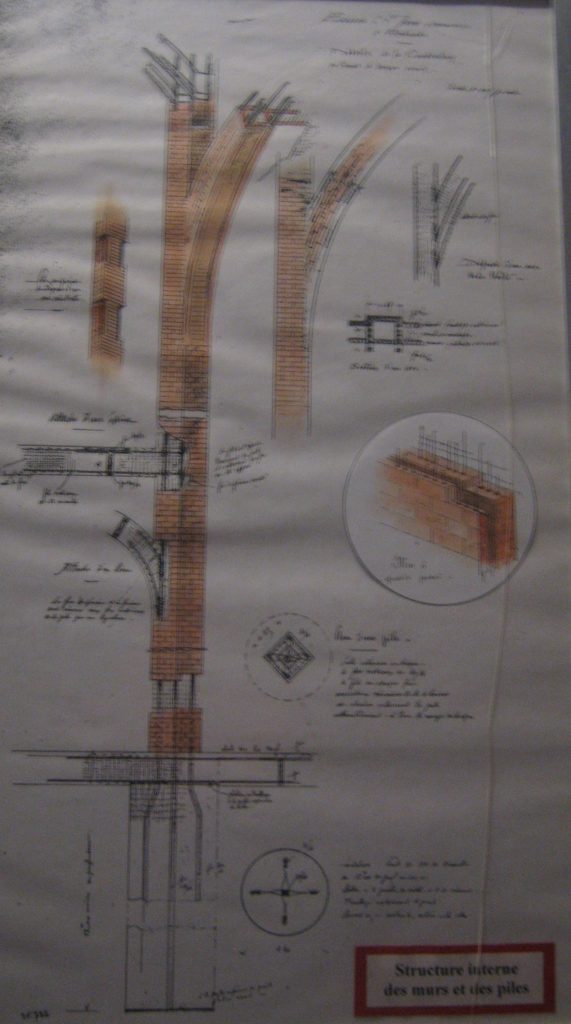 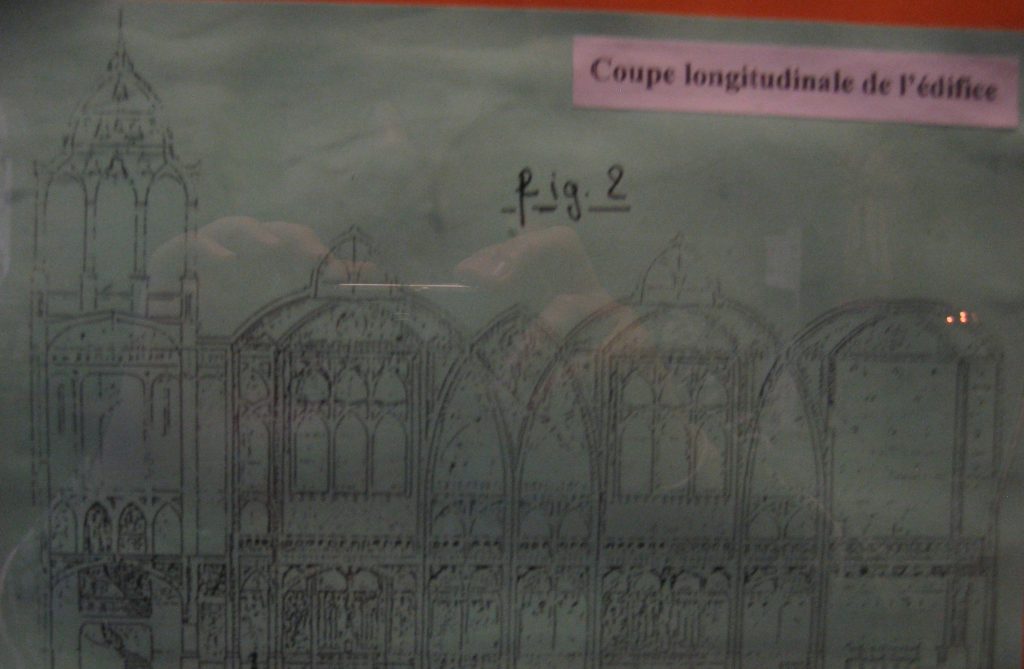 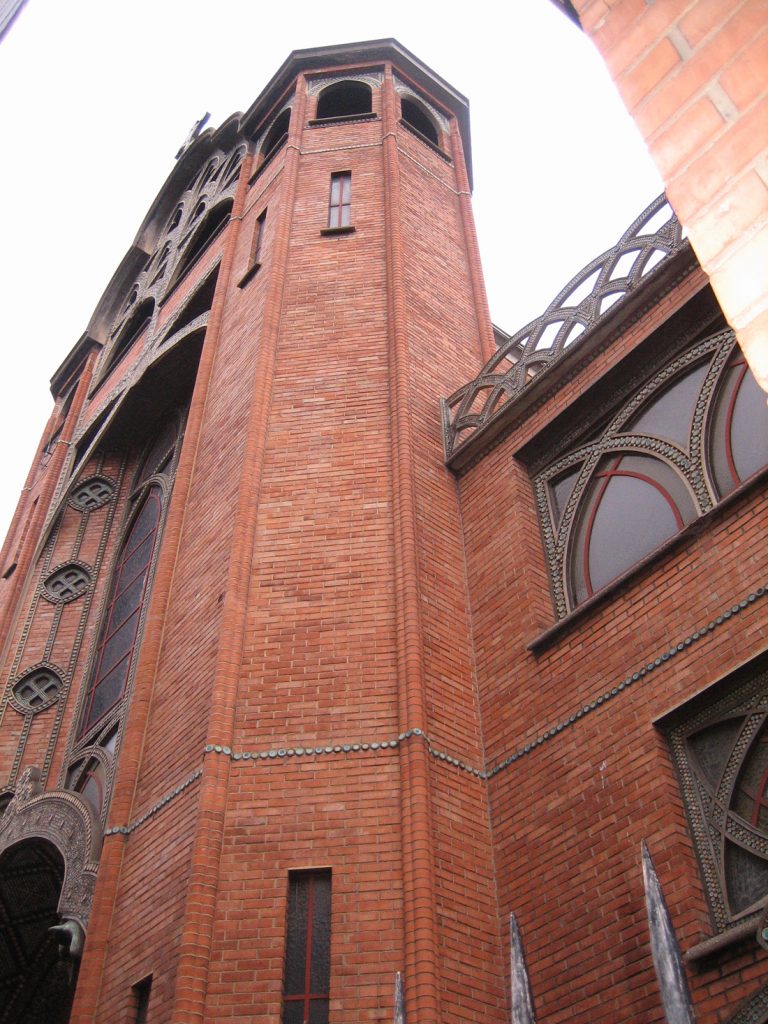 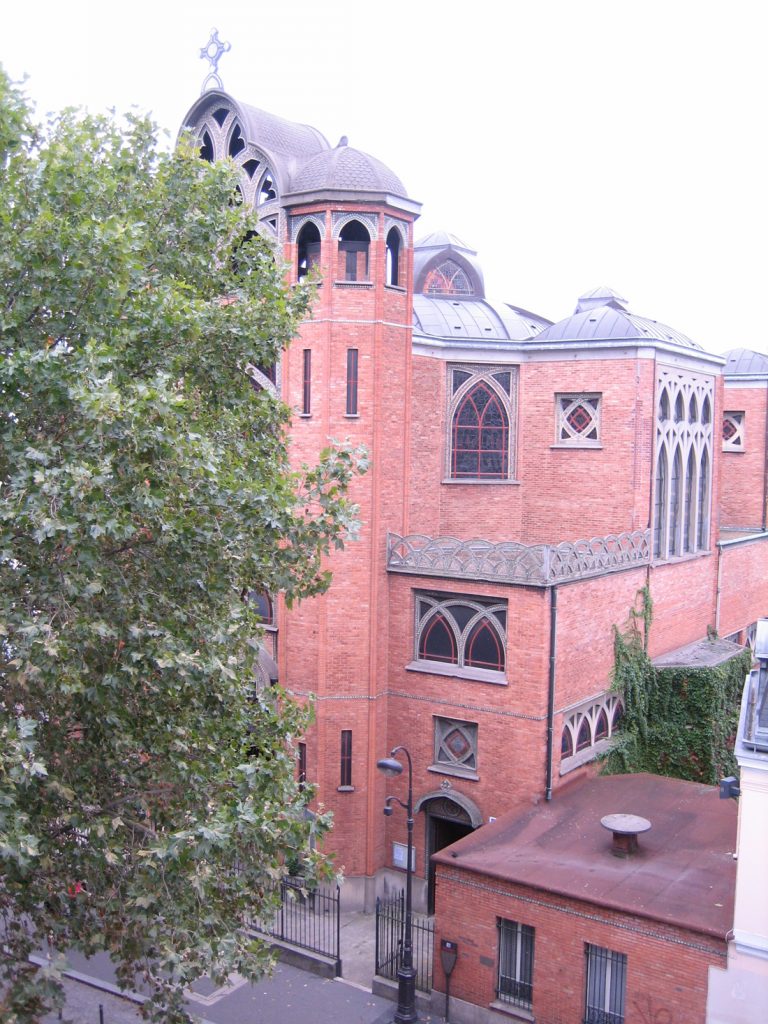 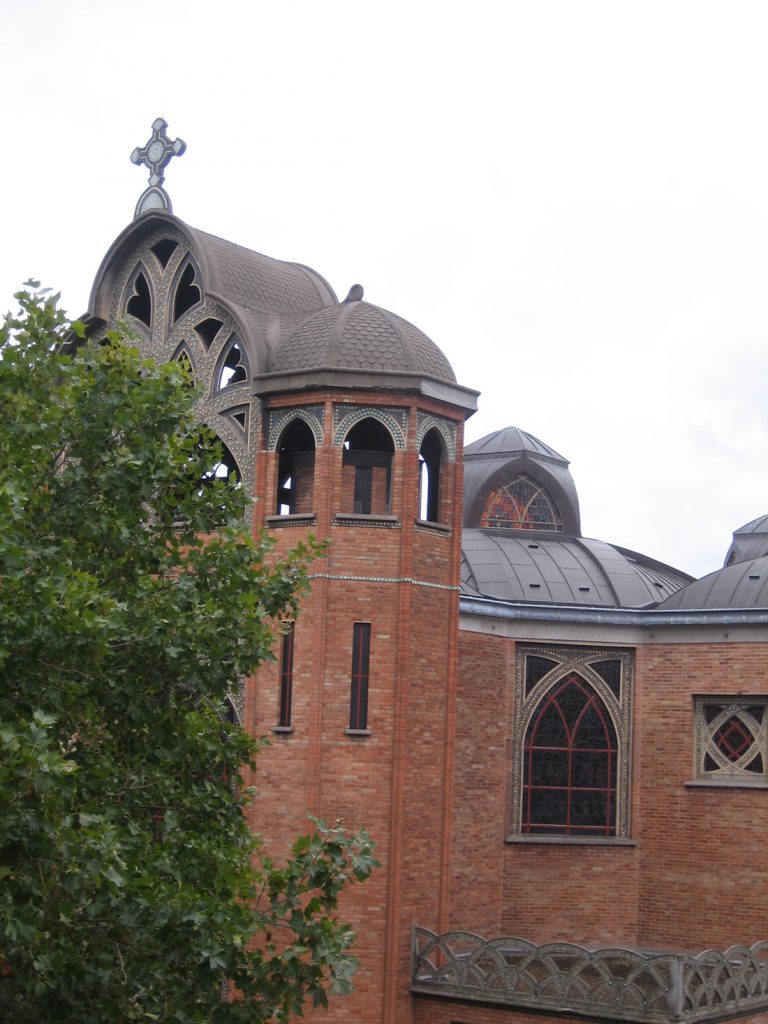 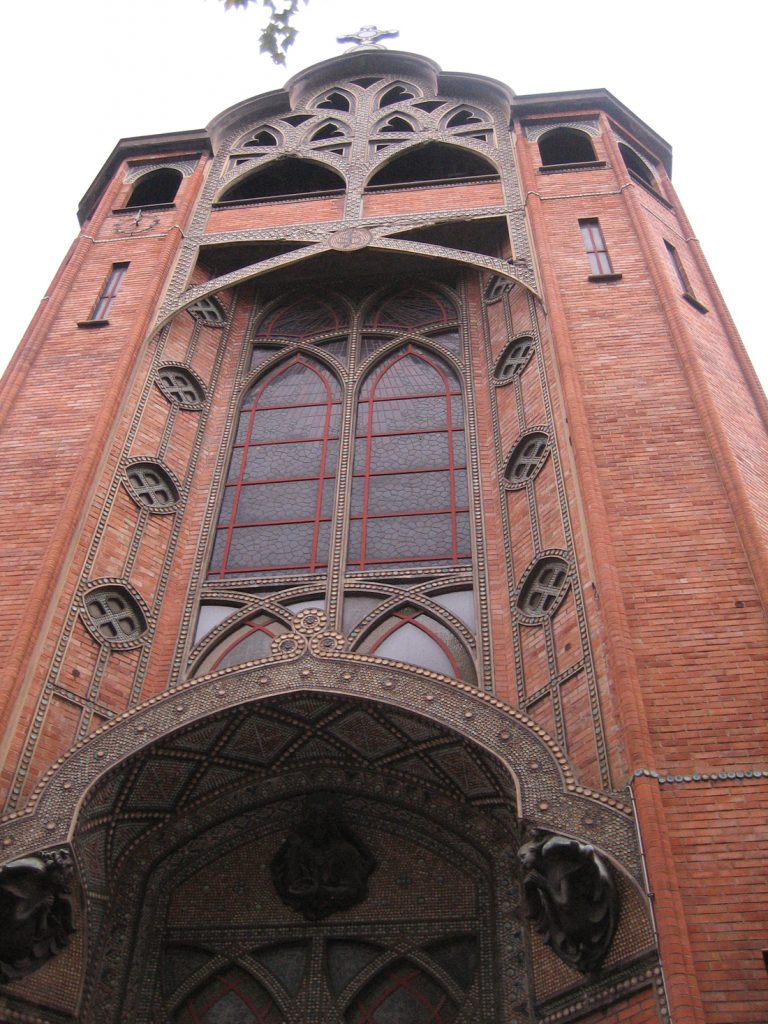 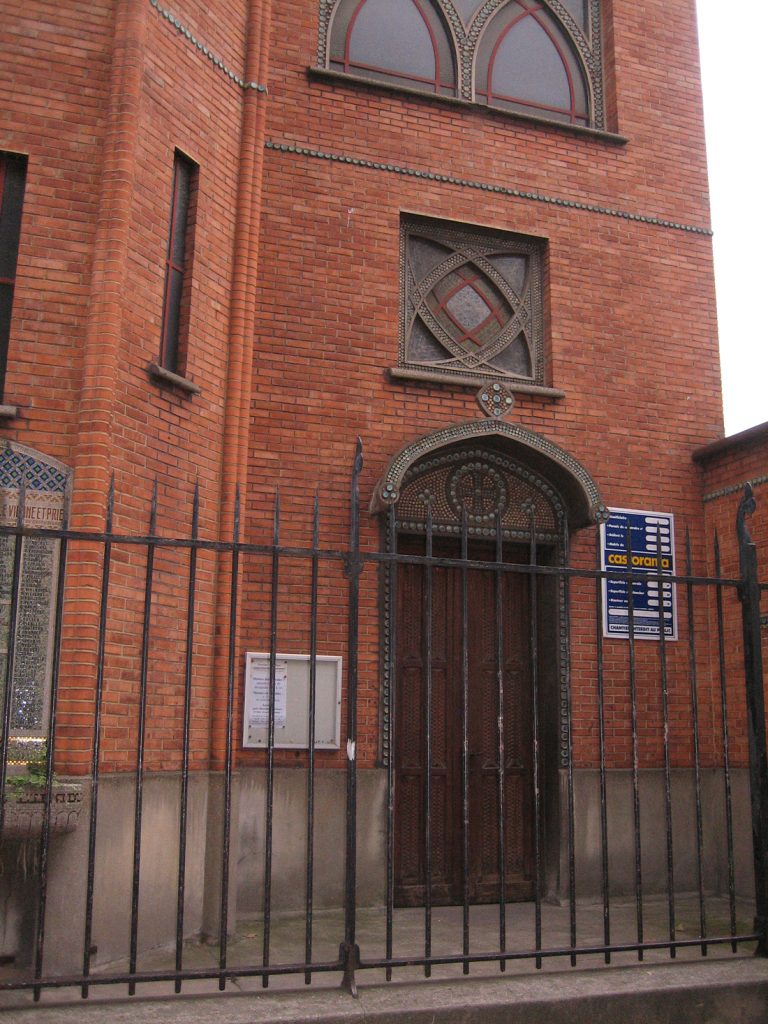 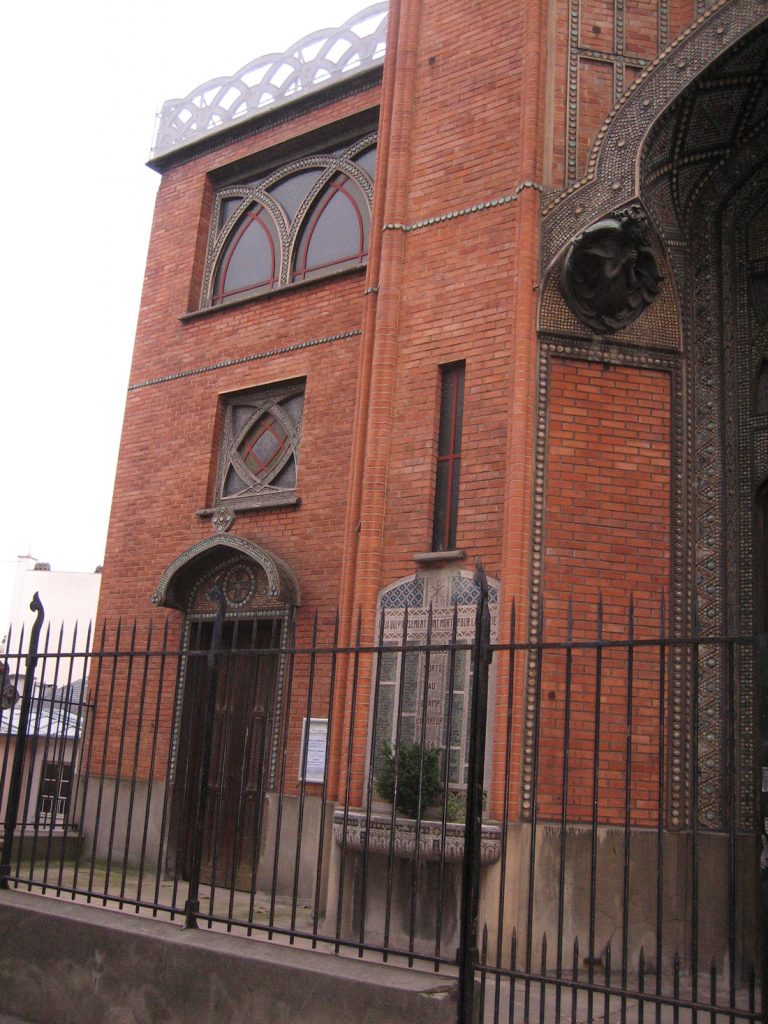 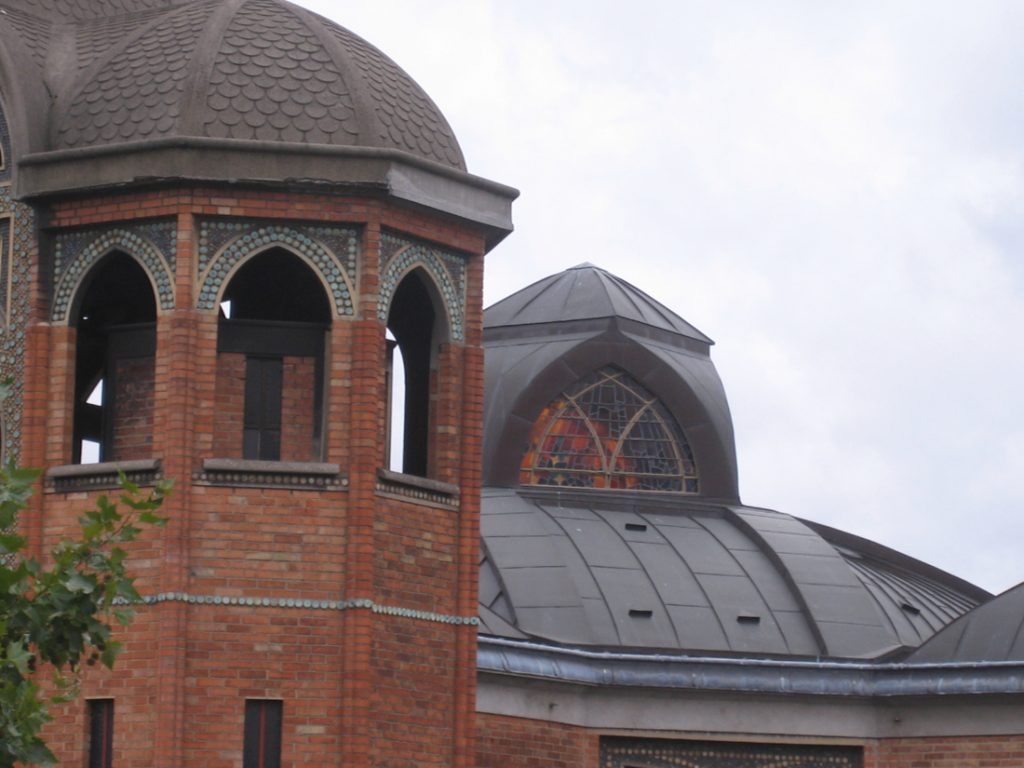 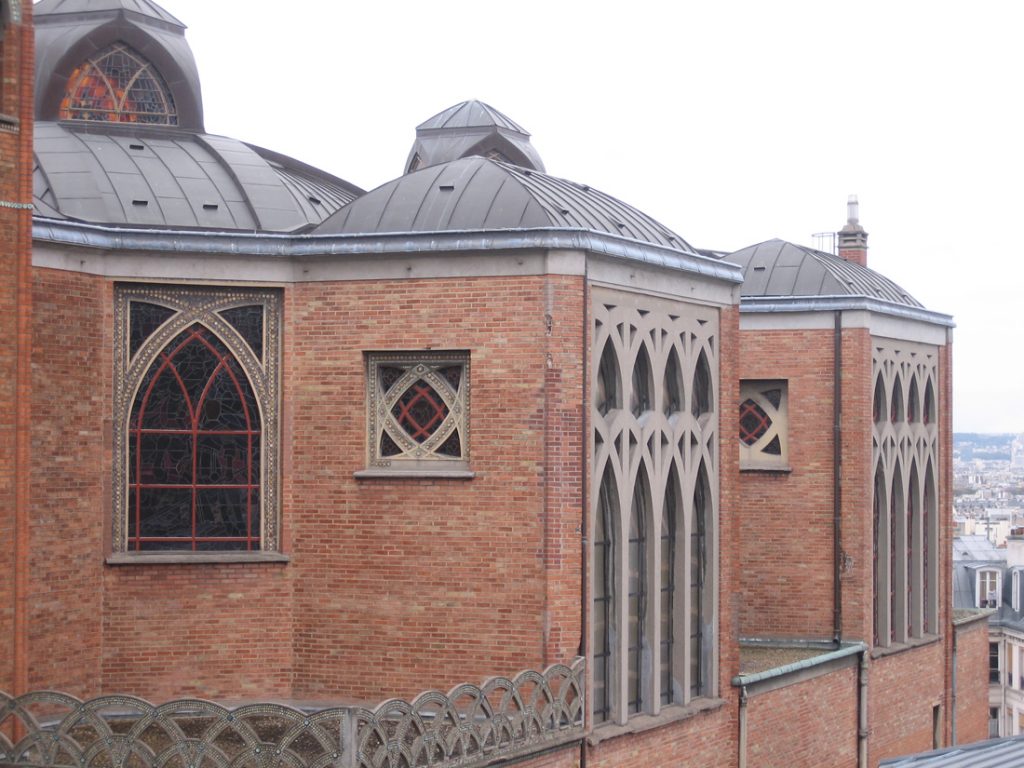 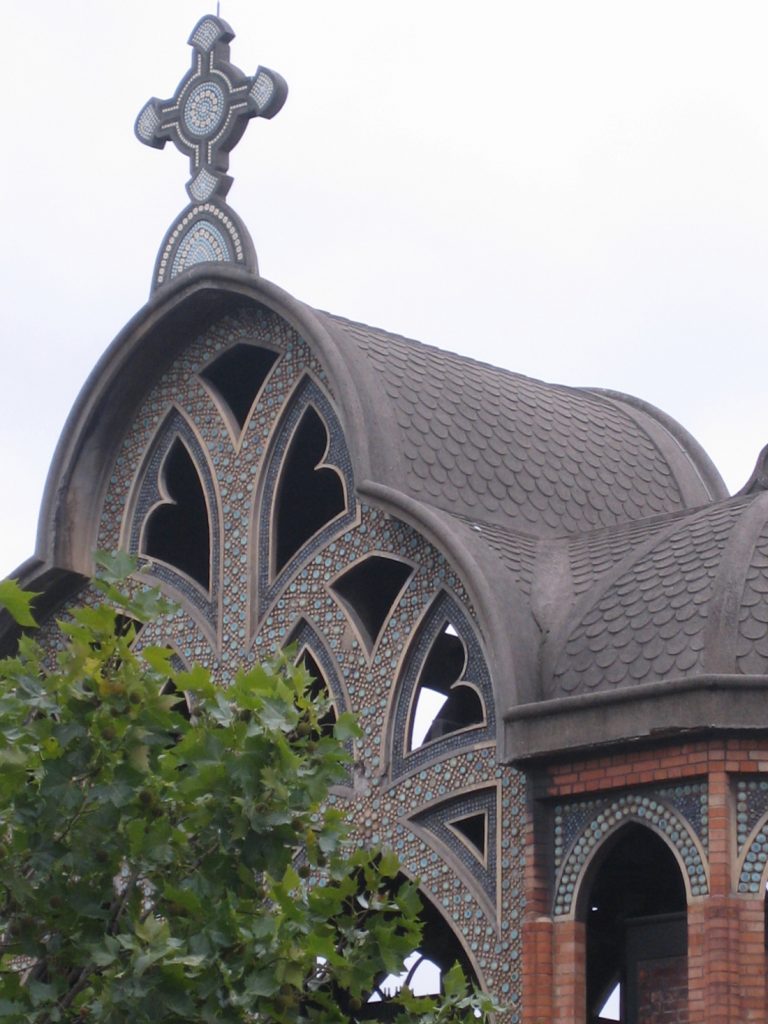 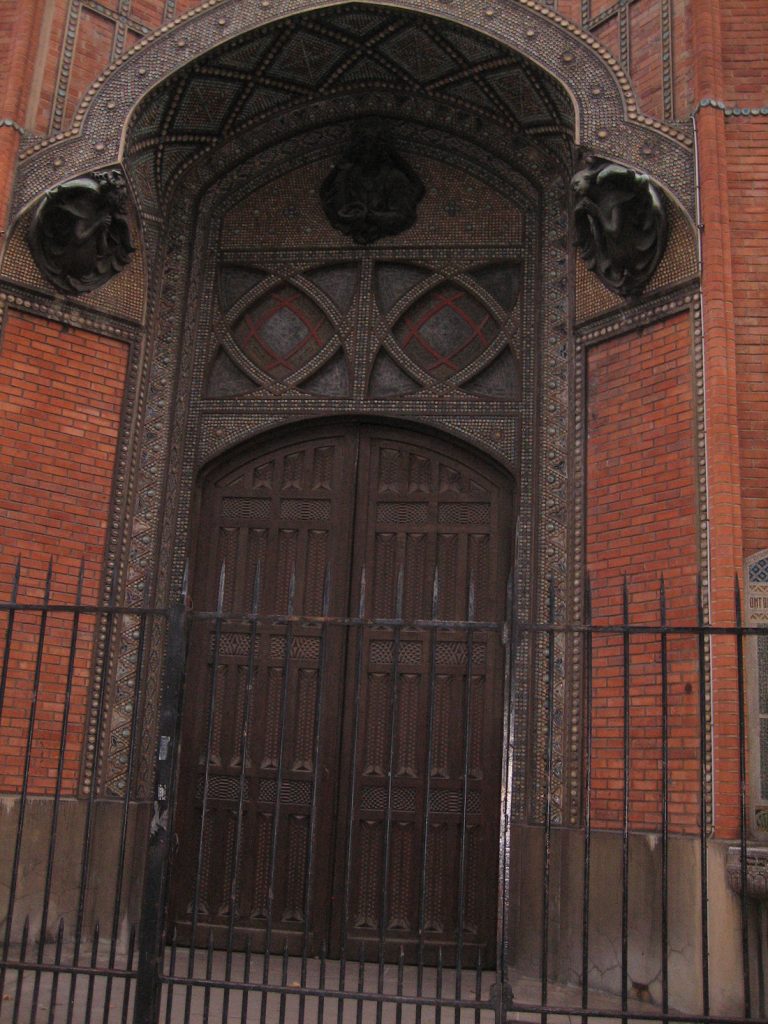 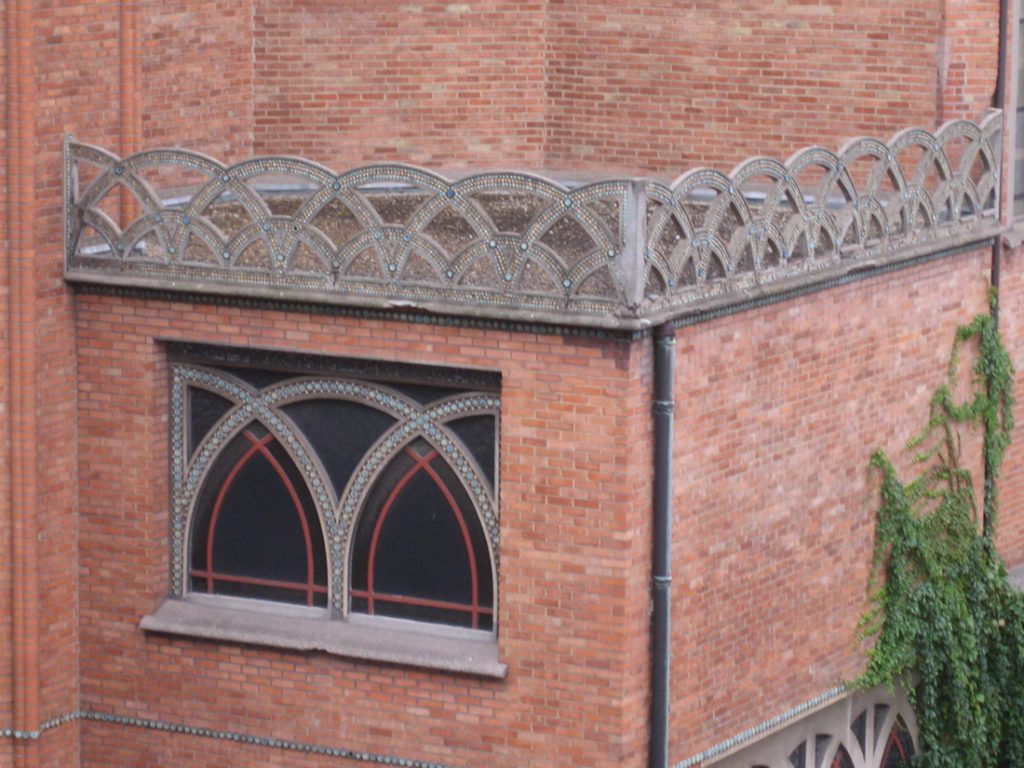 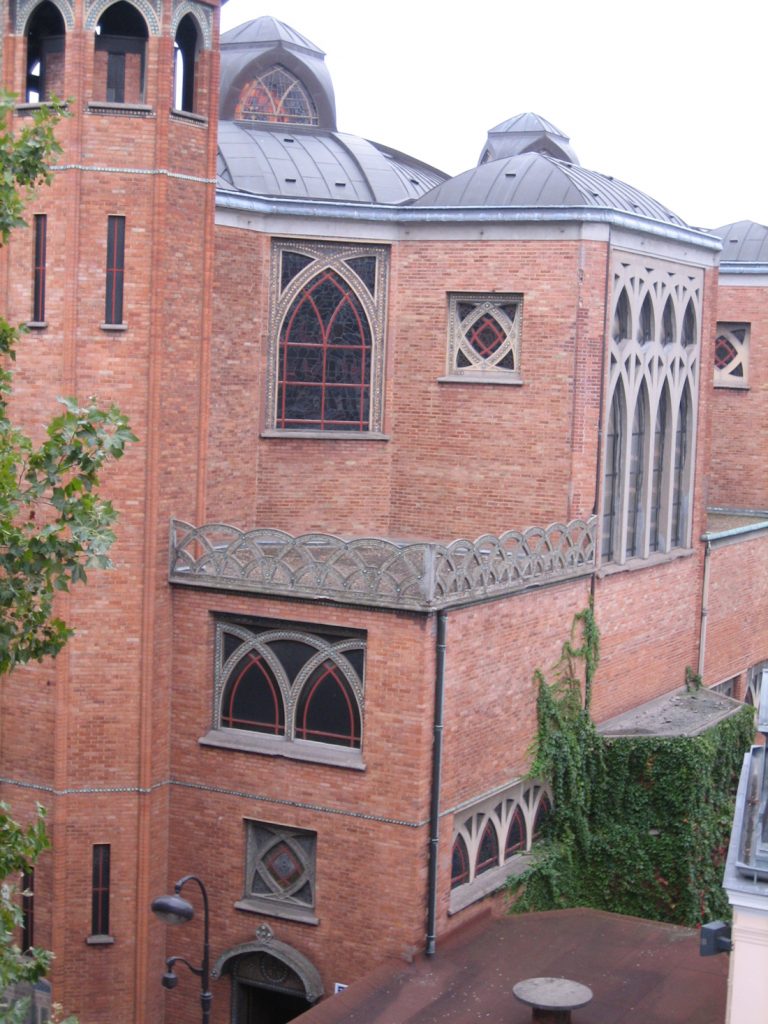 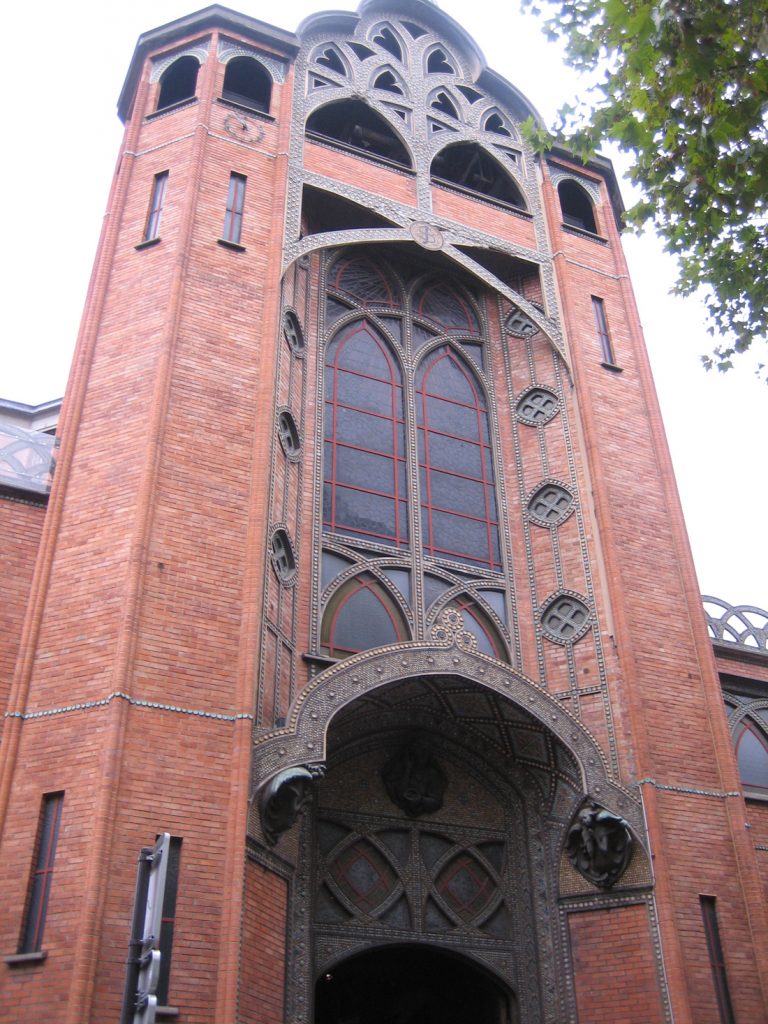 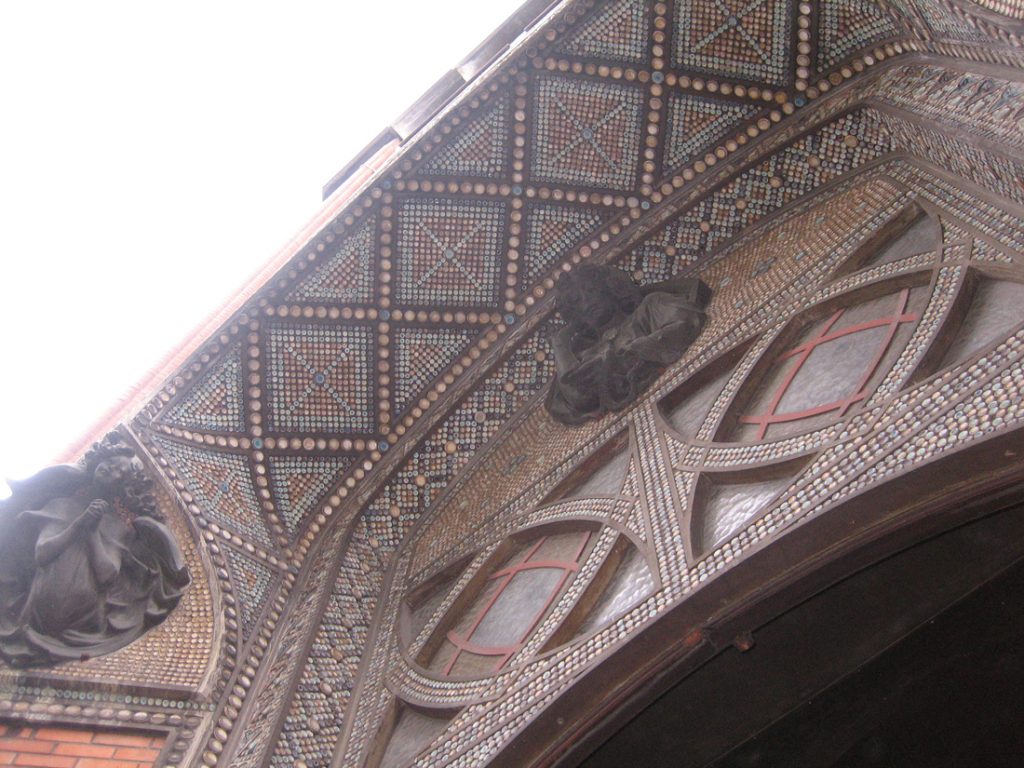 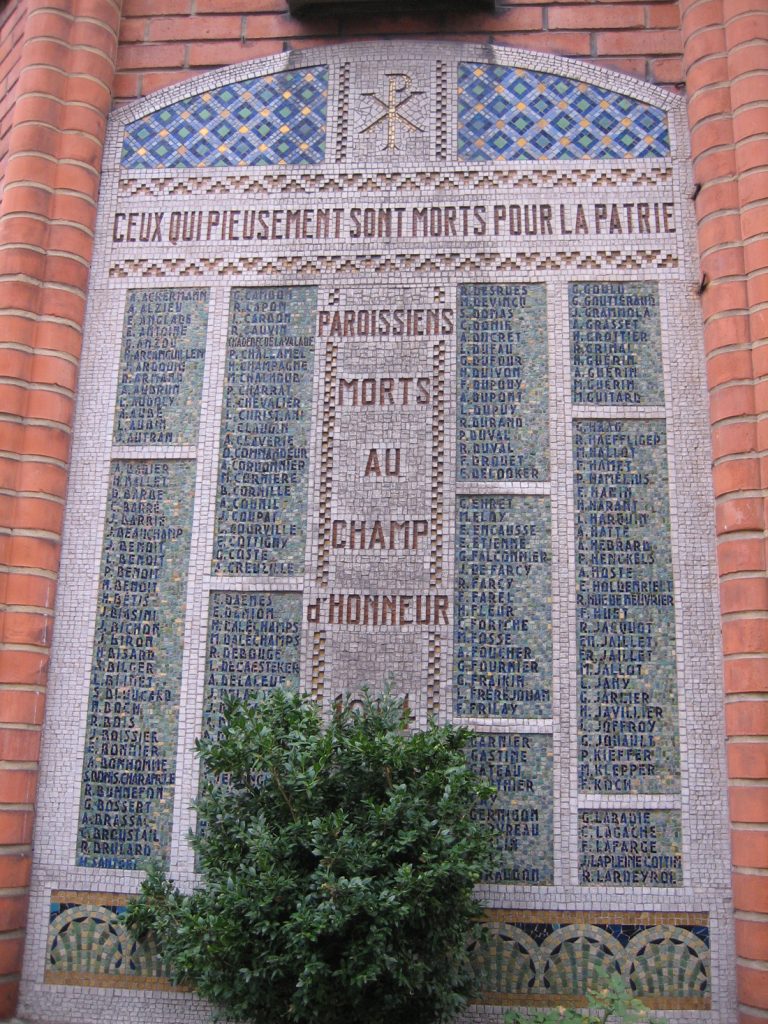 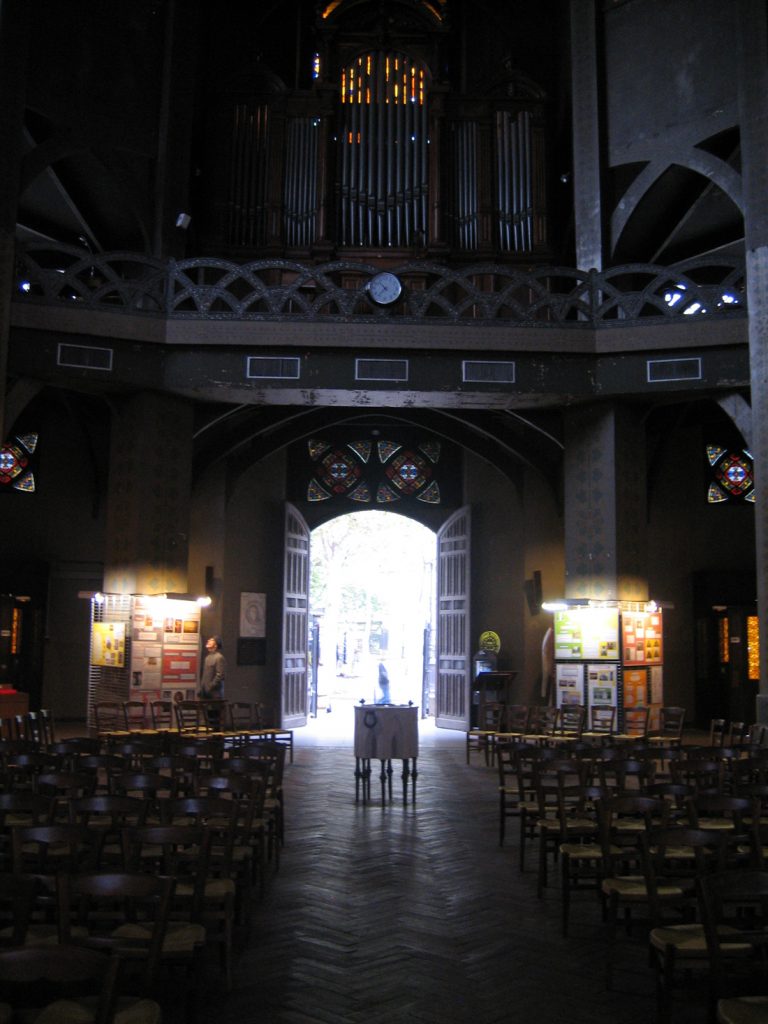 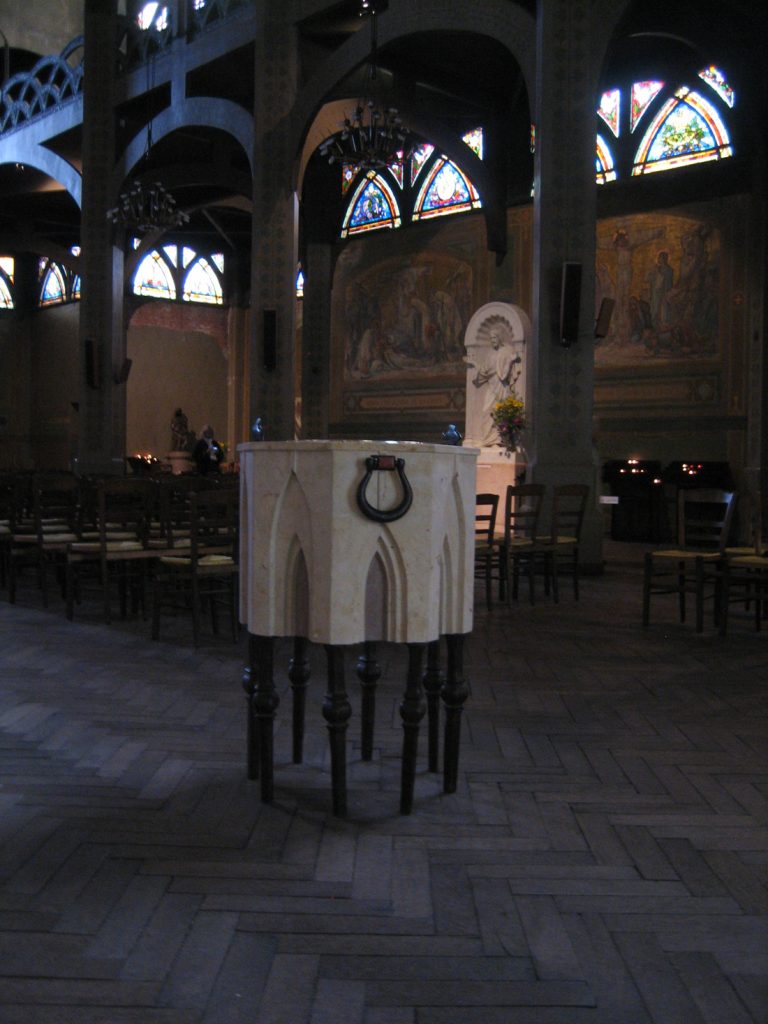 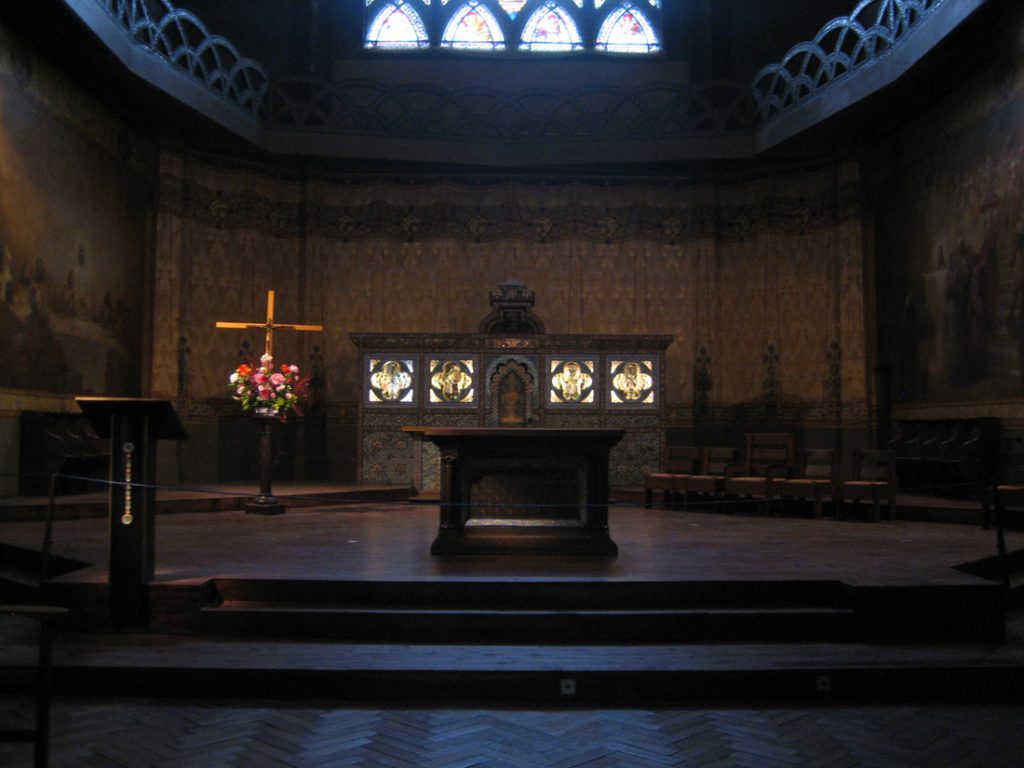 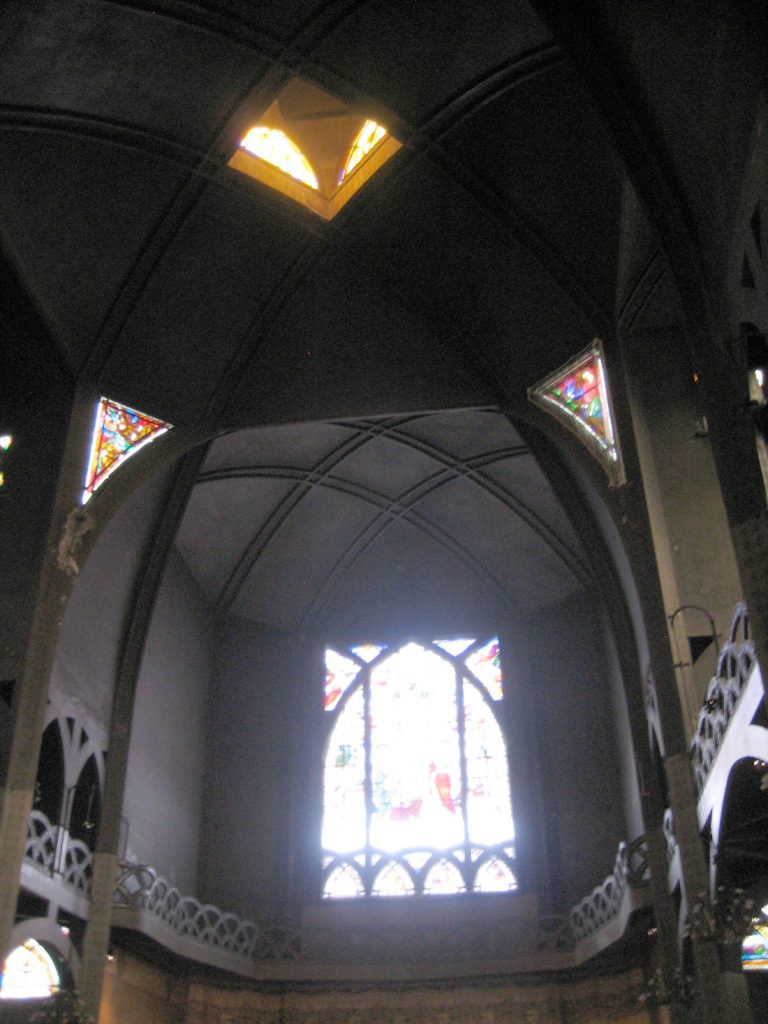 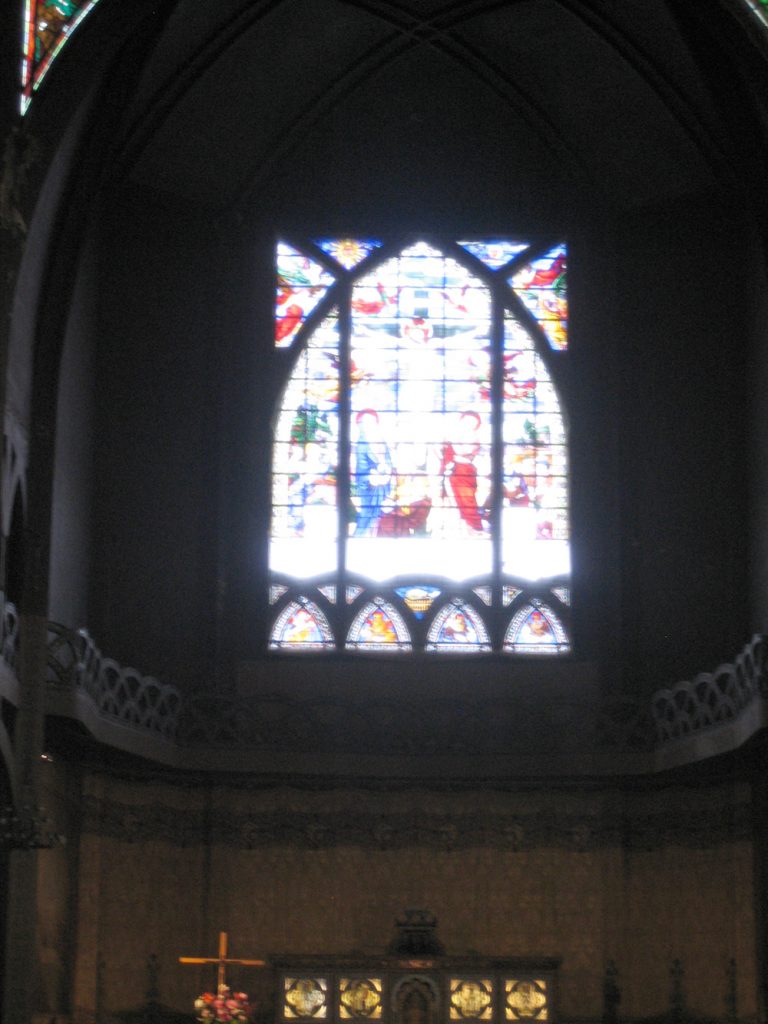 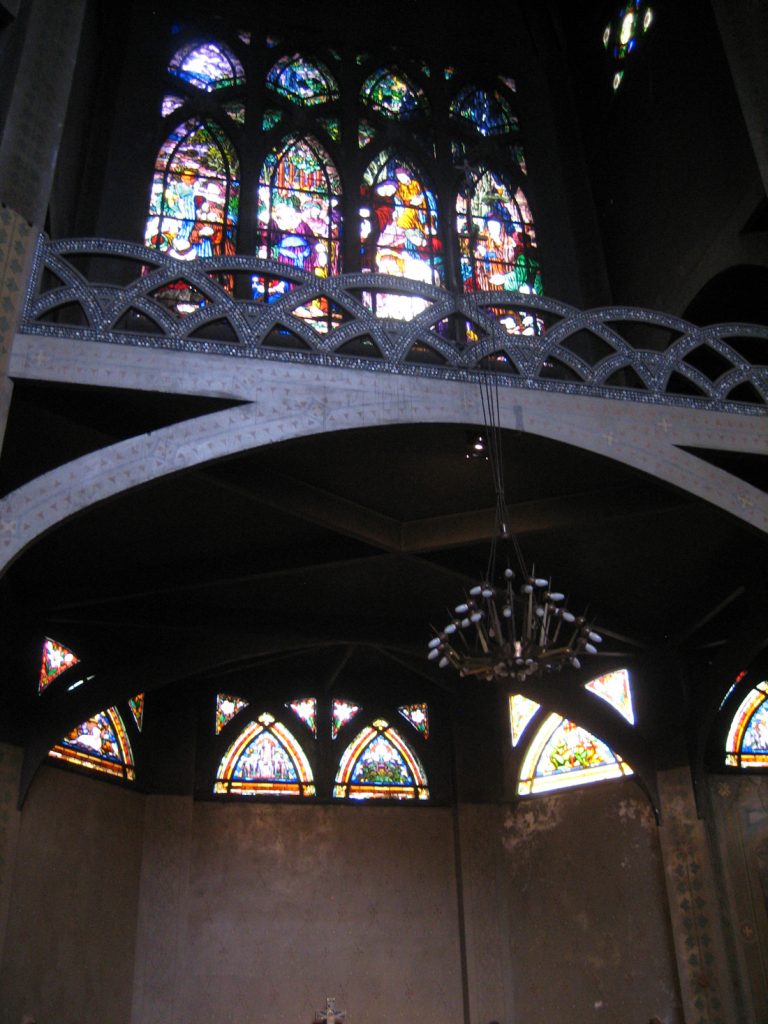 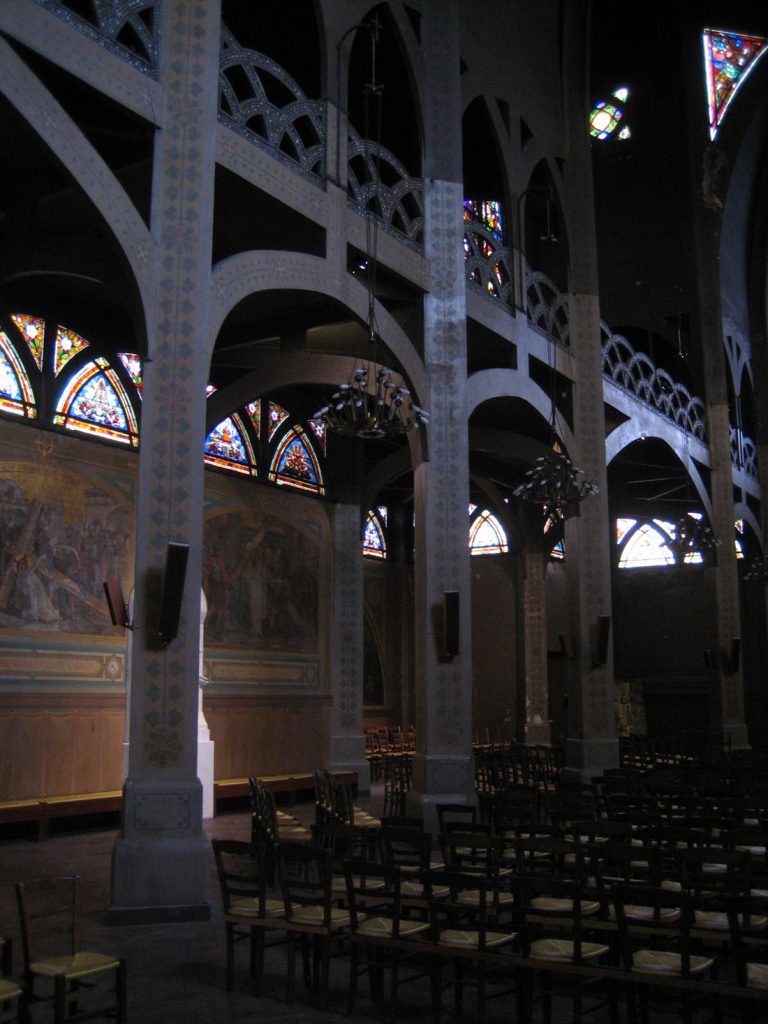 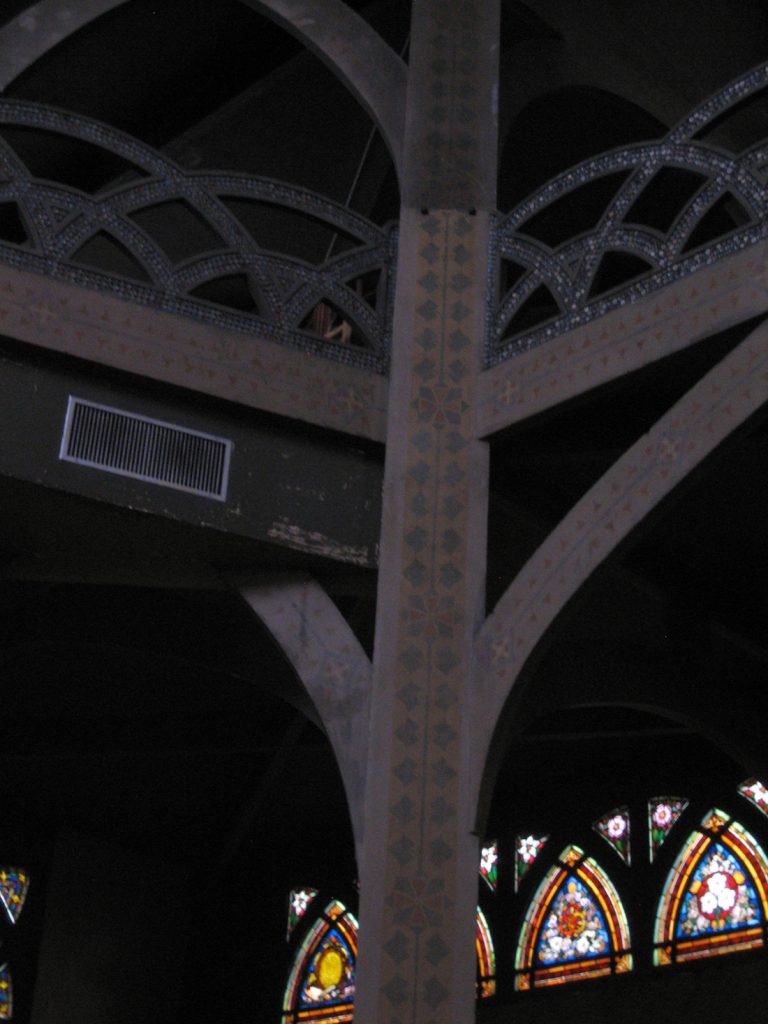 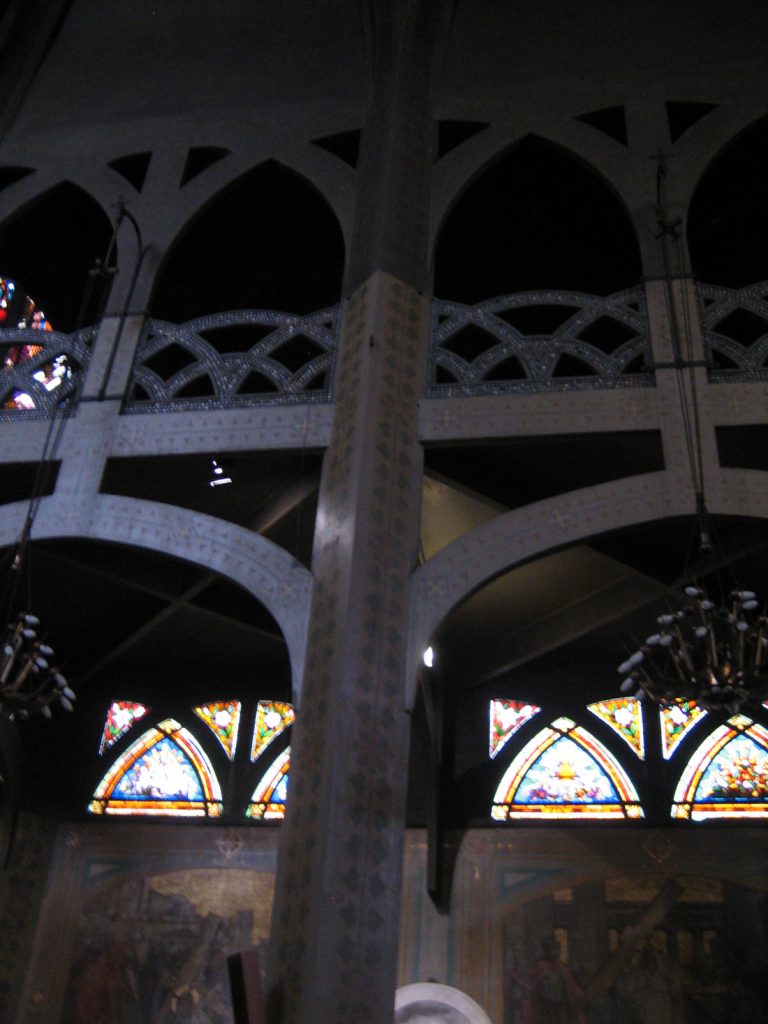 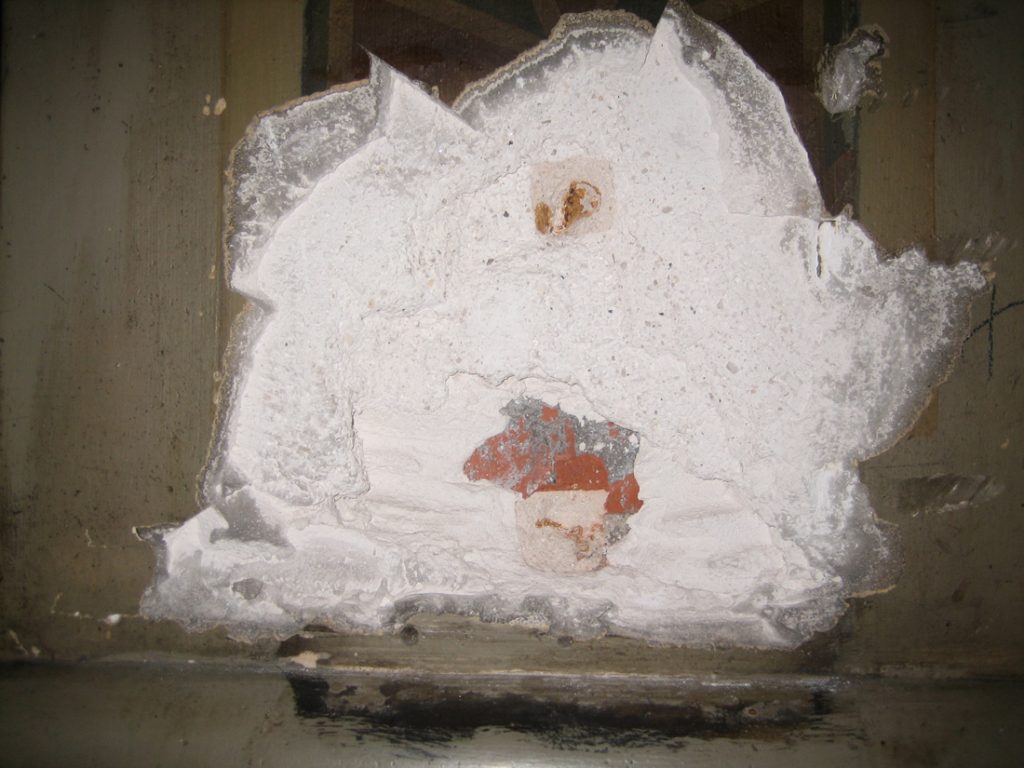