SAHMRI is the result of collaboration between the architect Woods Bagot and Aurecon, in the design of an Institute for Health and Research for the Government of South Australia. The 9 modules devoted to research will accommodate up to 700 researchers seeking ways to foster innovation and improvements in health services, which means improved health of the entire community. The design team and construction have worked in close collaboration to create a flexible, adaptable, healthy and sustainable facility, which has been rated LEED Gold.

Open to the public and users building rises, creating a partially open on a landscape that seems to float plane. The building interdisciplinary research is conducted in collaboration with three universities in South Australia and the new Royal Adelaide Hospital. A second building SAHMRI for research, along with two medical centers, medical training, with several plants, owned by the University of South Australia and University of Adelaide will be built in the future, creating the largest health center and biomedical research southern Hemisphere.

The SAHMRI building, located on North Terrace, Adelaide, Australia, is not designed to integrate into the horizon, is a floating object.

North Terrace is one of the four terraces that bring together the business and residential area of Adelaide, the capital city of South Australia and the fifth largest in the country. Runs east to west along the northern edge of the “square mile”, so named because of the gold mine known as the “Super Pit” which brings 115 years of mining history, making for years that square mile the richest land.

According to the history of progressive reforms in South Australia, Adelaide has often caused the implementation of environmental sustainability initiatives in the country. In addressing some of the environmental challenges facing cities, energy principles at work in the building SAHMRI could guide the path of sustainability of Adelaide in the next decade and provide an example for other cities to emulate. In South Australia, the emissions of greenhouse gases per person per unit of gross state product are high compared to the world average, according to the Authority for the Protection of the Environment of South Australia. The main reasons for these emissions are population growth, transport with high energy consumption and air conditioners in commercial and residential buildings. Adelaide has begun a path to become an ecologically sustainable city, but need more enclosures low carbon green architecture to achieve this goal. The SAHMRI building could serve as inspiration to get it.

The sculptural qualities of the building are designed to inspire and promote its own function. The transparent façade displays two internal atriums, while the shape of the building is expressed even more unique façade covered with a triangular grid inspired by the skin of a pine cone. This articulated skin adapts and responds to its environment, becoming a living organism that responds to the position of the sun.

According to Woods Bagot, the reason for the design of the building is to foster collaboration among researchers, achieved through an architecture that allows a visual connection between floors and a spiral staircase interconnection.

Through the dazzling facade it´s not posible to intuit the studied interior spaces of the building until you are inside, starting with the two large atriums with natural light. With nine fully flexible modules for wet and dry laboratories and nurseries, cyclotron and associated public areas, spaces were created to meet the potential needs and current scientists.

Again, the facade plays a very important role, allowing maximum daylight in these areas, while improving external views create a healthy internal environment. The architects suggest that glass partitions, open atriums and bridges, such as the visual connection between floors and a spiral staircase interconnection connectivity and encourage collaboration among researchers working in the center. The transparent facade promotes external researchers SAHMRI views, raising the importance of their activities, and therefore, the overall function of the building.

Confined spaces laboratory support are located along the western facade to provide protection against the strong afternoon sun. SAHMRI accommodates 675 researchers, having 25.000m2 surface for medical research. The facility is located next to the new Royal Adelaide Hospital, sharing the concourse entrance.

The sculptural facade of the building, designed in collaboration with Aurecon, presents a strong front, a telltale sign SAHMRI vision to facilitate the forefront of health and reverse medical research into welfare for all people.
The integrated structural façade also acts as a sun-articulated controls not only light but also heat load, glare and wind deflector. After an intensive environmental analysis consultants Atelier 10 Woods Bagot uses parametric modeling tools to integrate into the facade environmental, programmatic and procedural requirements.

From the beginning, the architecture and structural engineering met to ensure a clear path to build a functional and iconic building. This binding was a design with a delicate geometric aesthetic form, using simple Euclidean theory of light covers that are usually used in modern stadiums. This technique allowed the use of an “active structural form” to the charge distribution, allowing the use of small rectangular hollow steel elements that allow free passage of natural light through large spaces of the building. The 36 columns that would have been necessary to support the upper floors were reduced to 6 mainstays located plaza level, being reduced the weight of the steel structure must withstand approximately 250tn.
The design solution also creates the illusion that the building floats above the ground, improving the architectural vision to not give back to the city for any side.

To coordinate the complex structural form and integrate it with the services that are required for a facility of this caliber, was used a BIM design approach. The resulting model after all consultants combine their requirements was finally adopted by the entire team, coordinating disciplines, resolving conflicts and planning the project, both before and during construction. Traditional processes could not have designed this complex structural geometry and curvature, while the BIM approach could be applied successfully engineering in which more than 14,000 triangles and extremely narrow steel profiles, 150mm deep, over 35m.

Inspired by the skin of a pine cone, triangular diagrid facade responds to the environment as a living organism. Breathing life into the urban landscape, pointed windows contain 6,290 triangular glass panels that glow in the sun. The complex structure of the facade is a combination of a sub-frame structural steel diagrid with an external bath aluminum double glazed triangular panels, woven panels and solid aluminum panels perforated mesh. The structural steel grid extends up to 35 meters without additional support and has less built than if it had been made ​​of aluminum only energy. Sunscreens are designed and oriented for optimum thermal and lighting efficiency, while reducing the heat load and glare, thereby varying sizes and making it almost impossible to record accurately the scale of the building.

The laboratory building minimizes energy use with a heating, ventilation and air conditioning energy efficient, with high levels of use of outside air, which is still unusual for laboratories. The fresh air is carried through the lush gardens of the square through a maze sub-cools the air naturally. A “smart” helps improve energy efficiency. System Other features include rainwater collection and reuse of treated water. 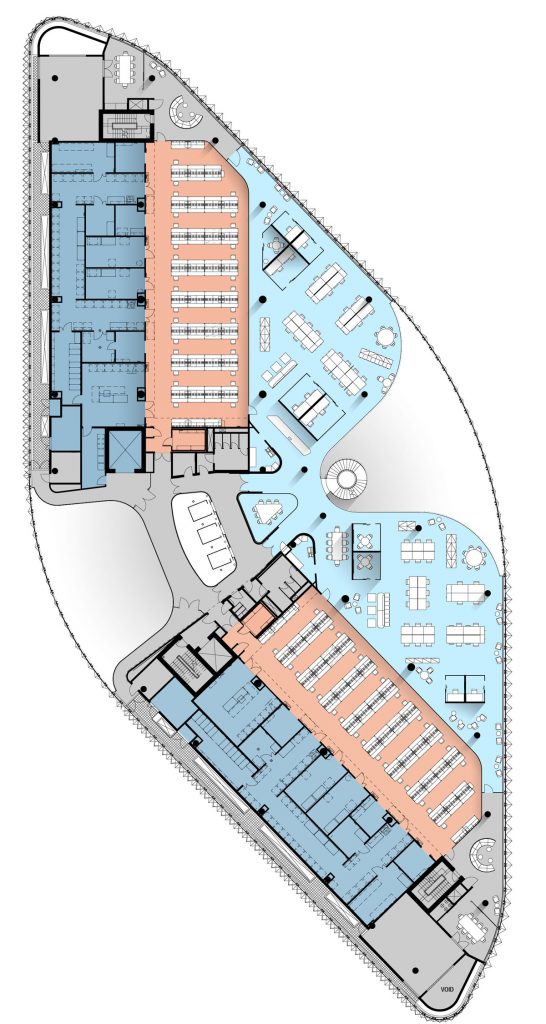 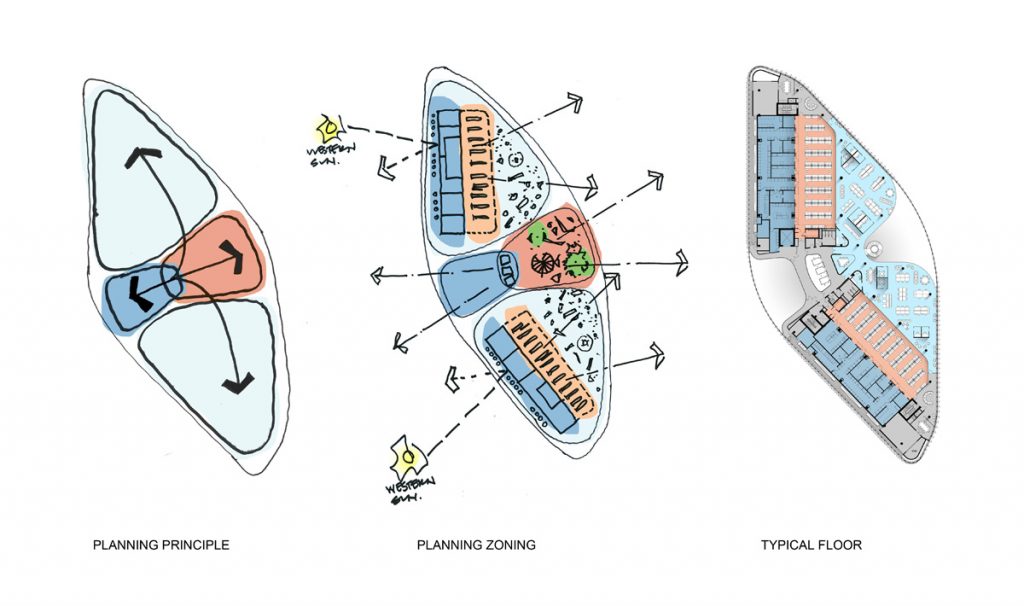 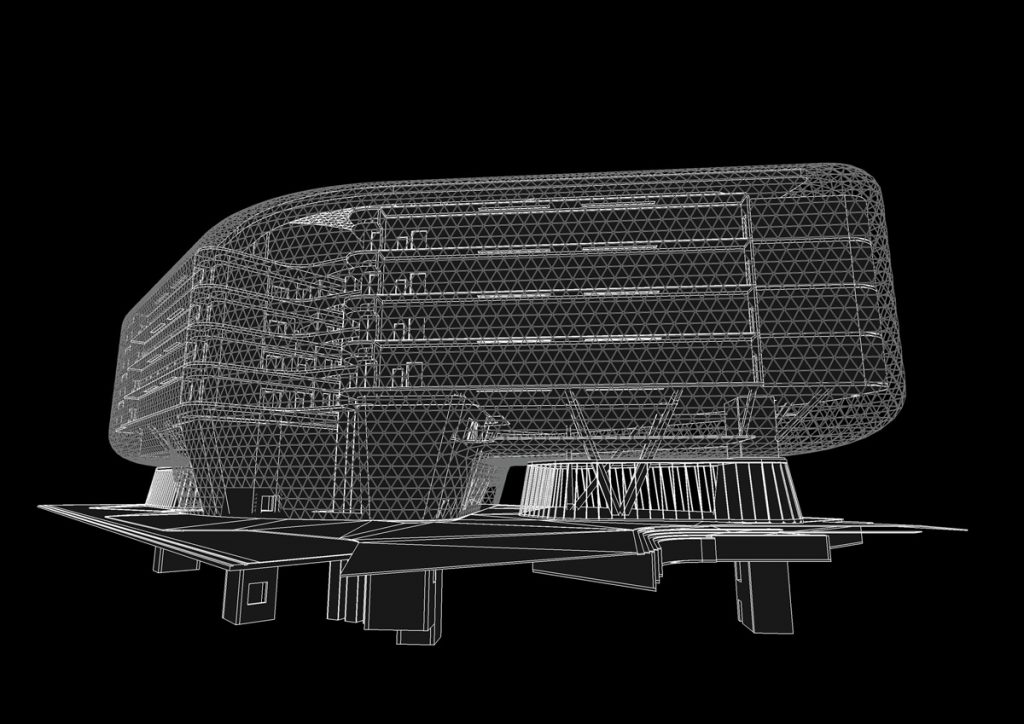 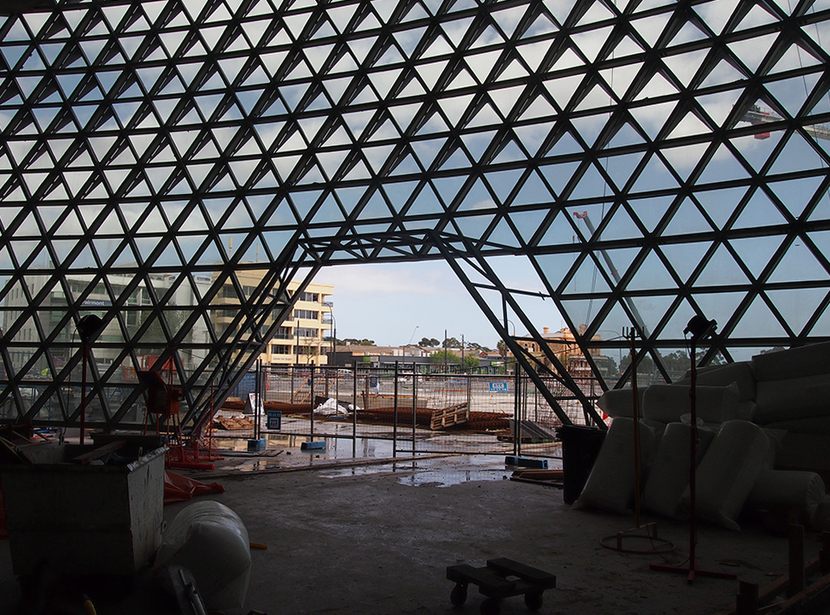 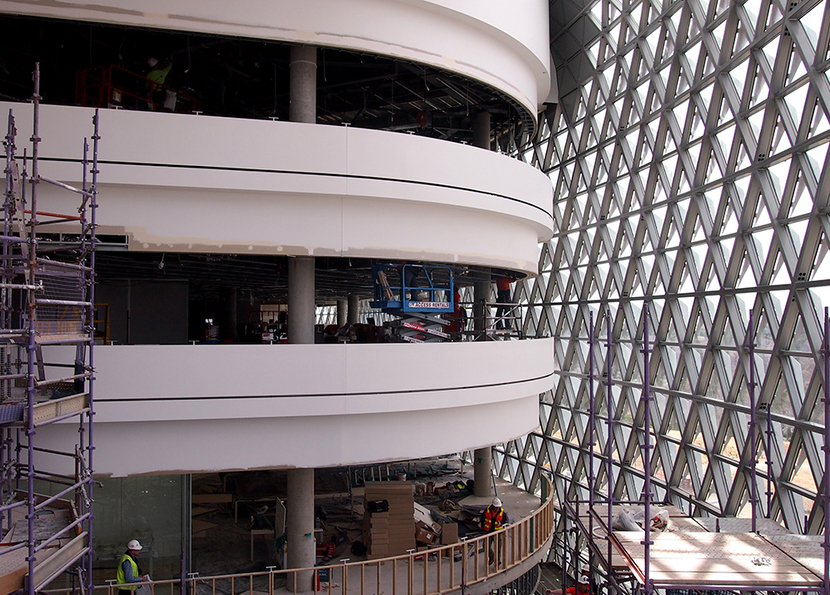 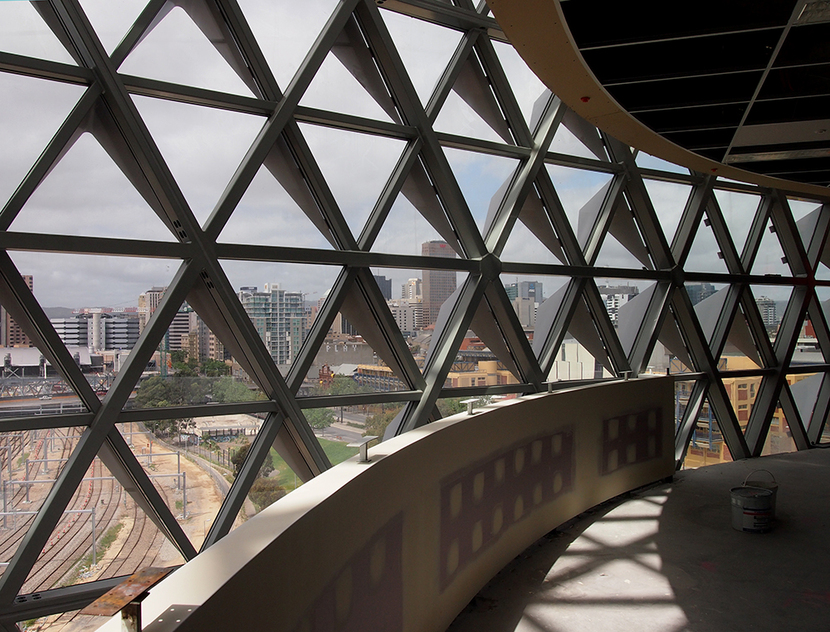 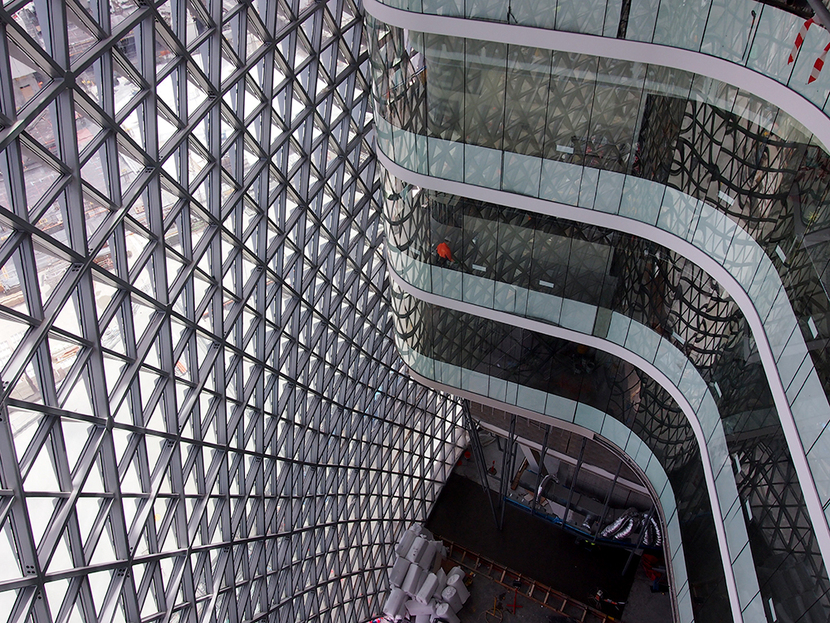 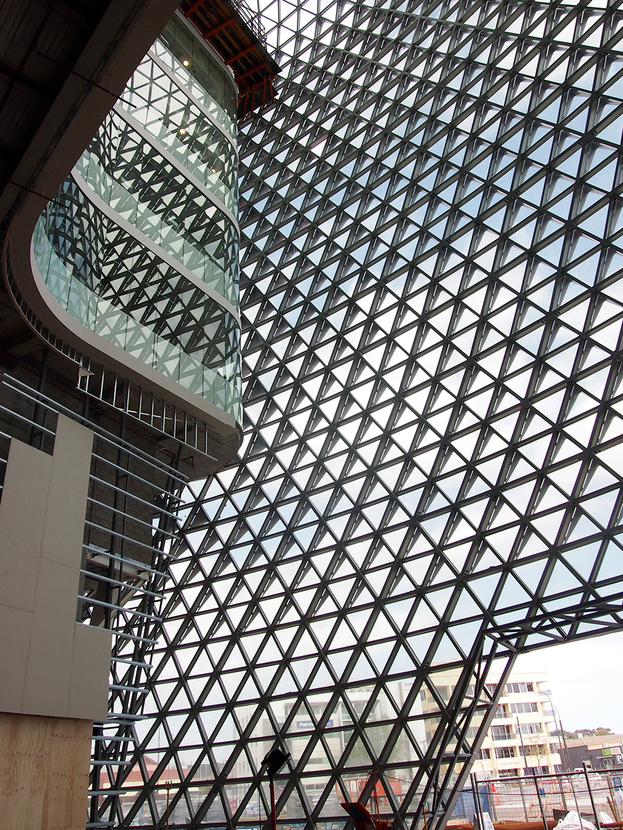 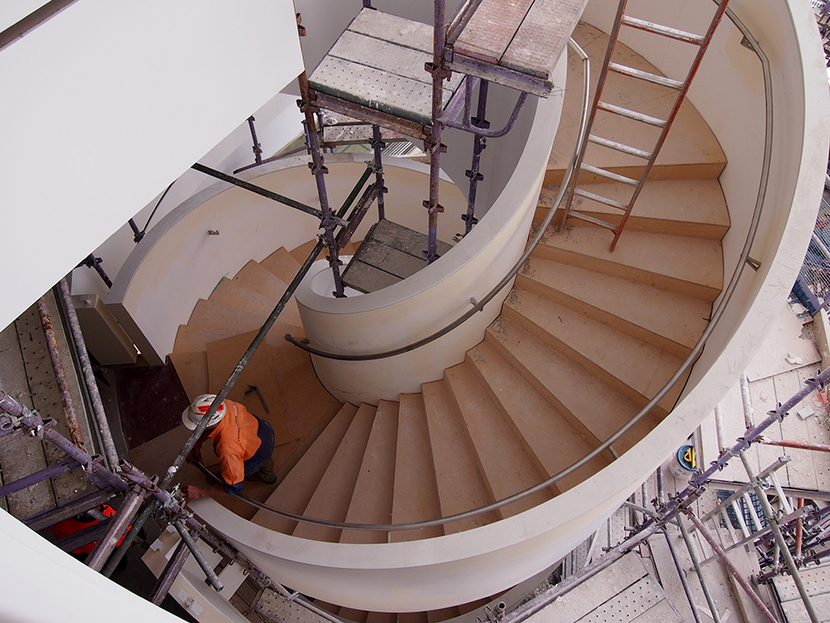 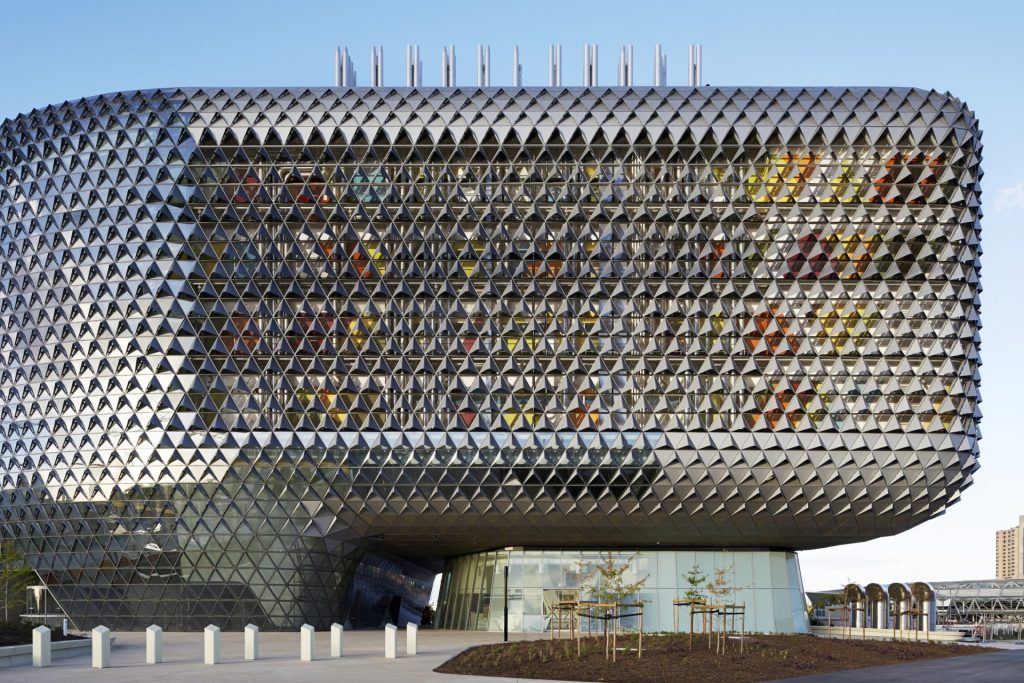 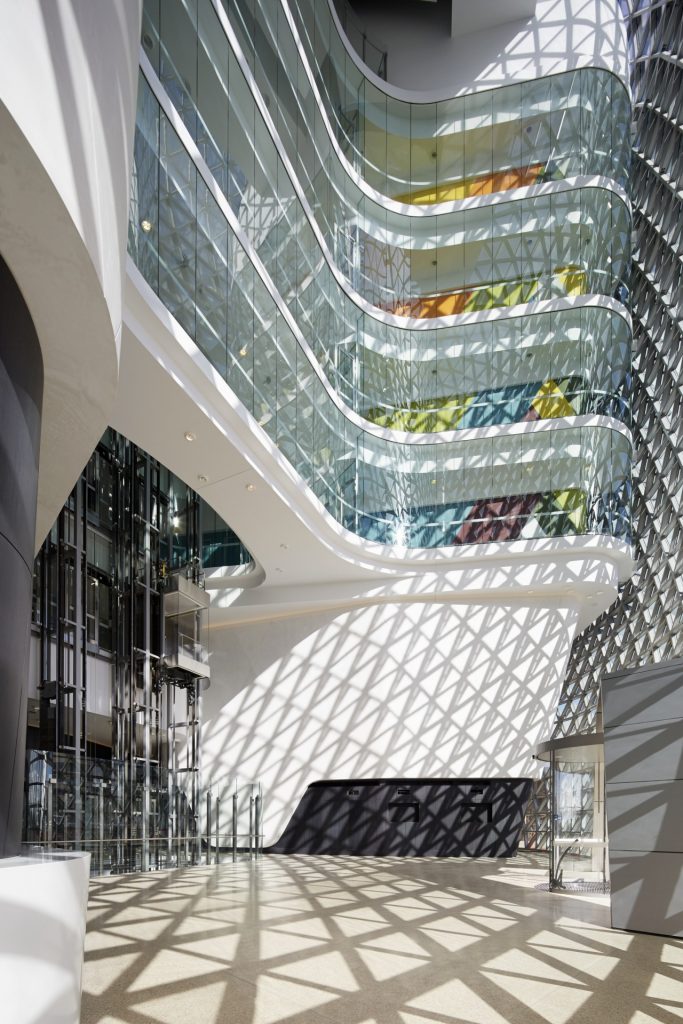 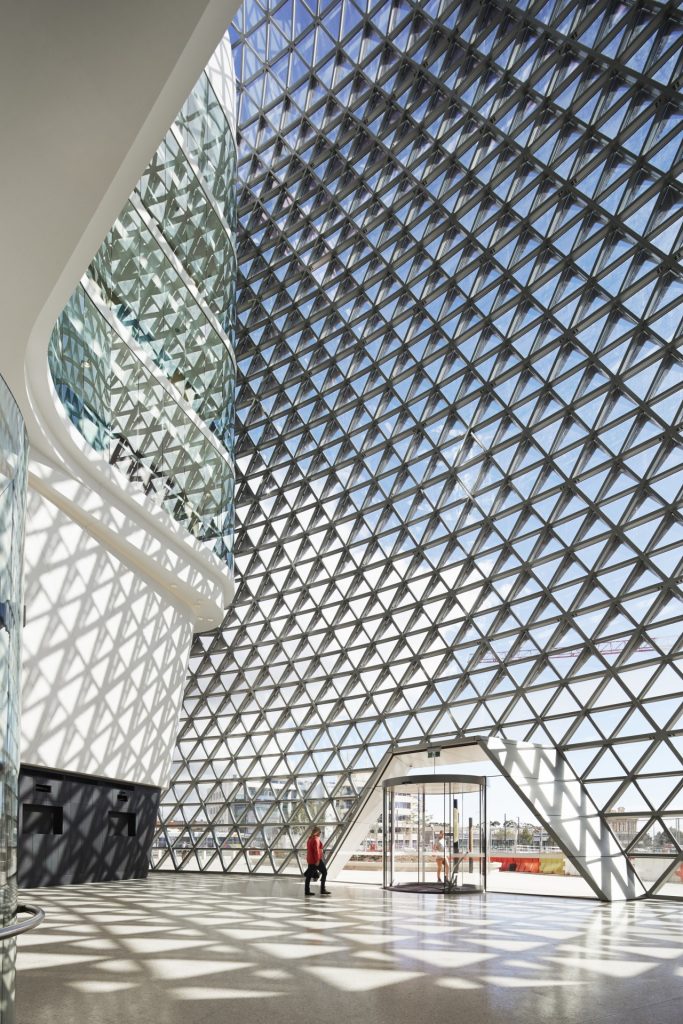 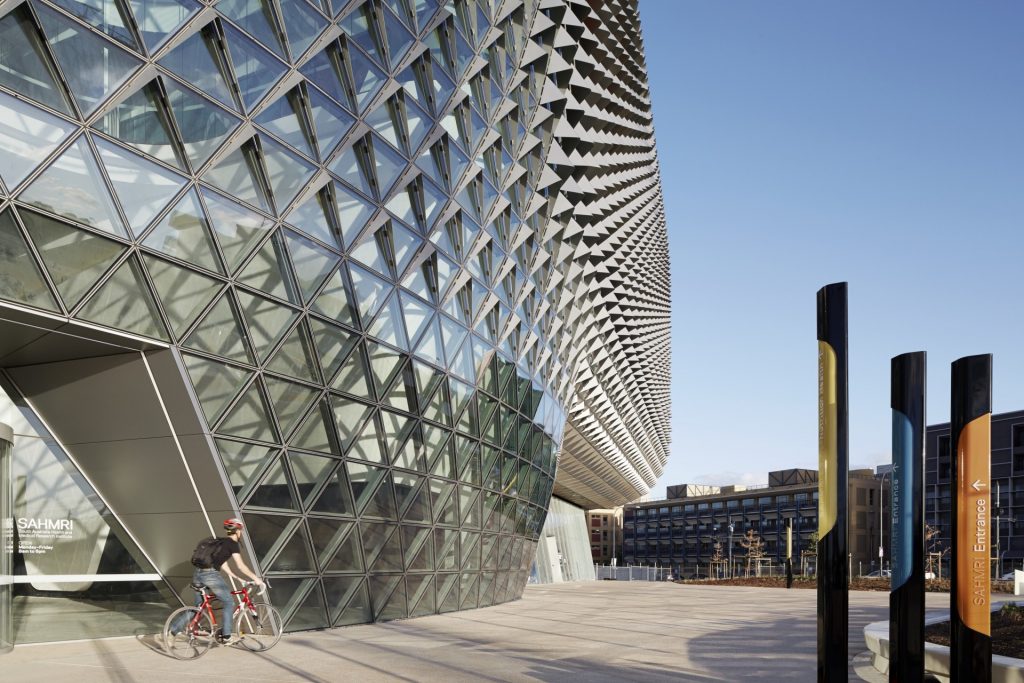 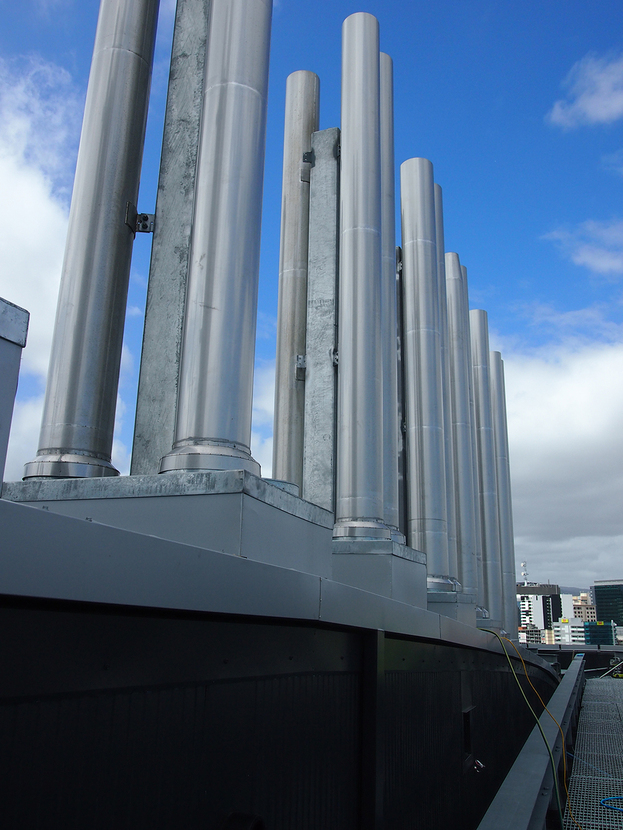 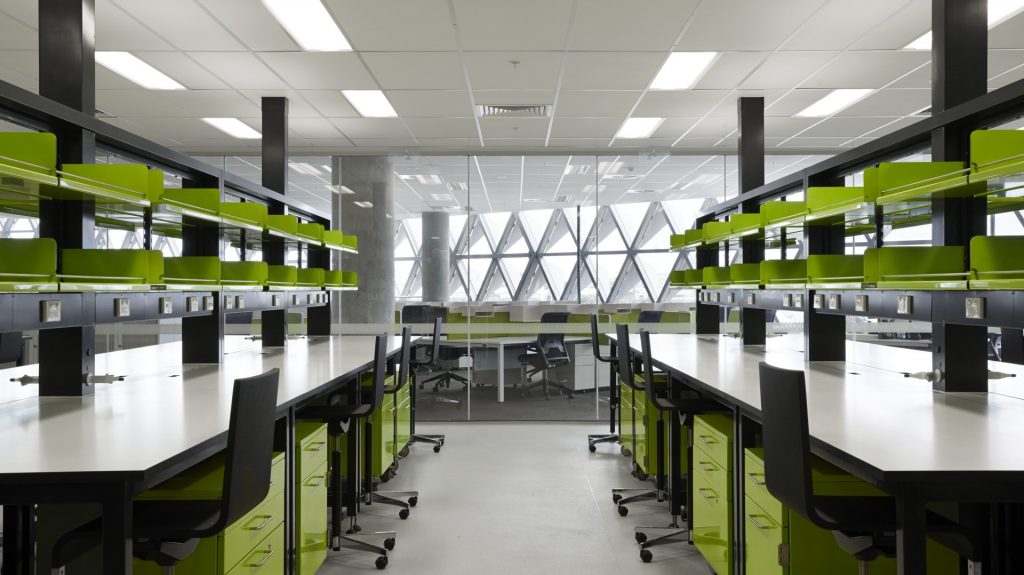 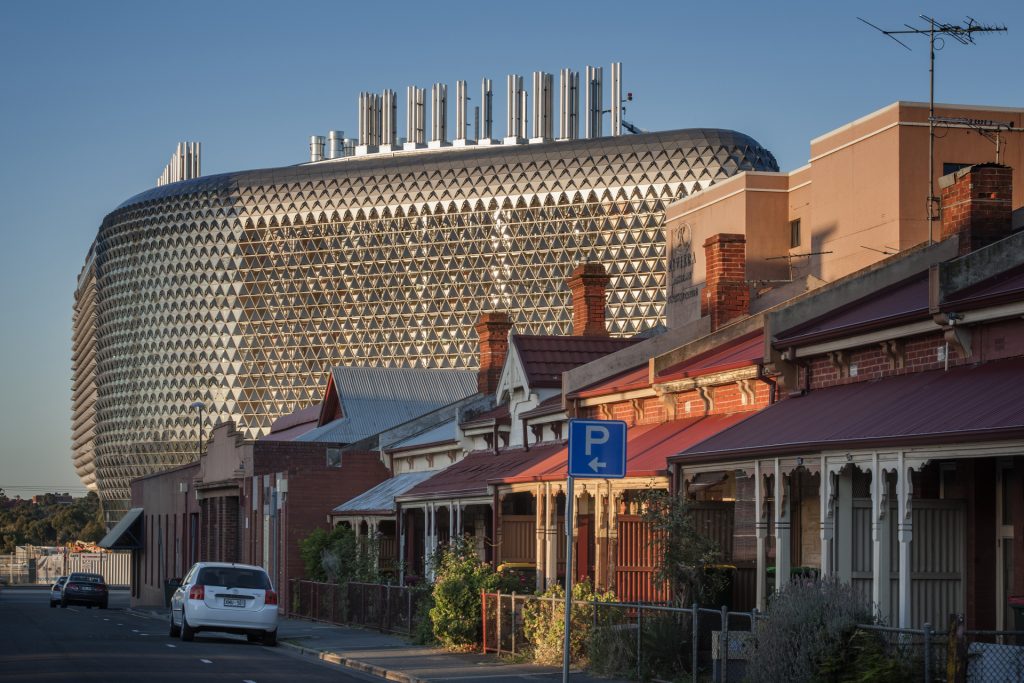 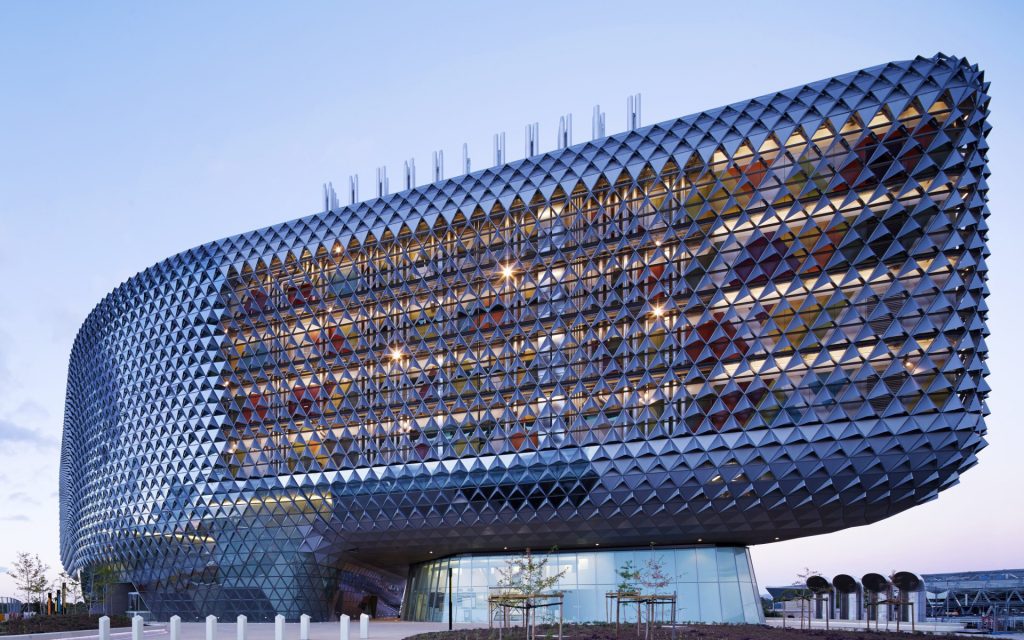 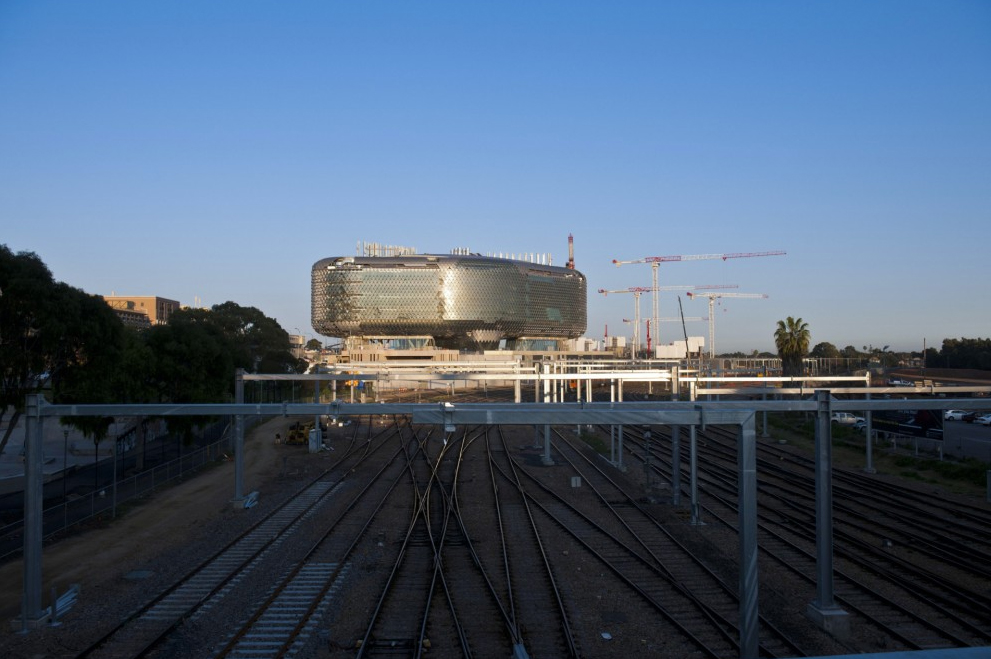 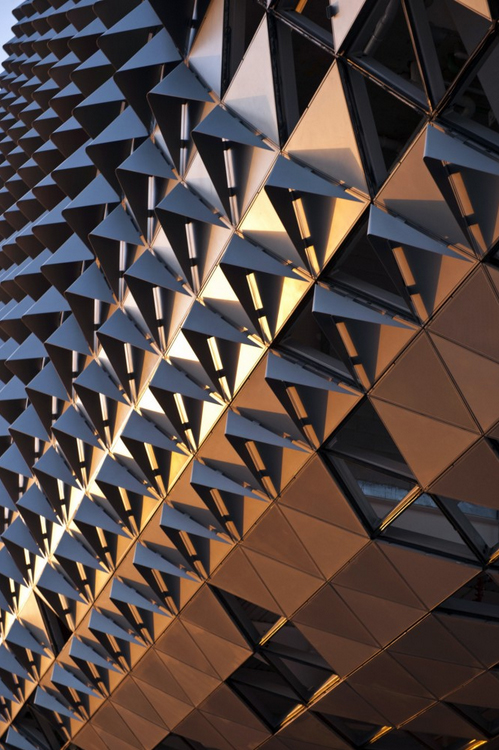 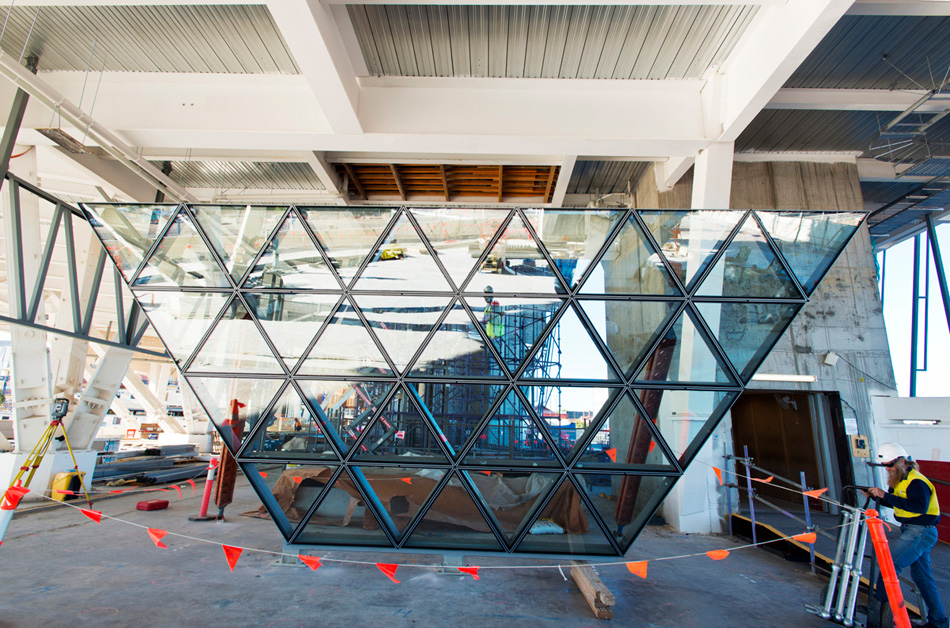 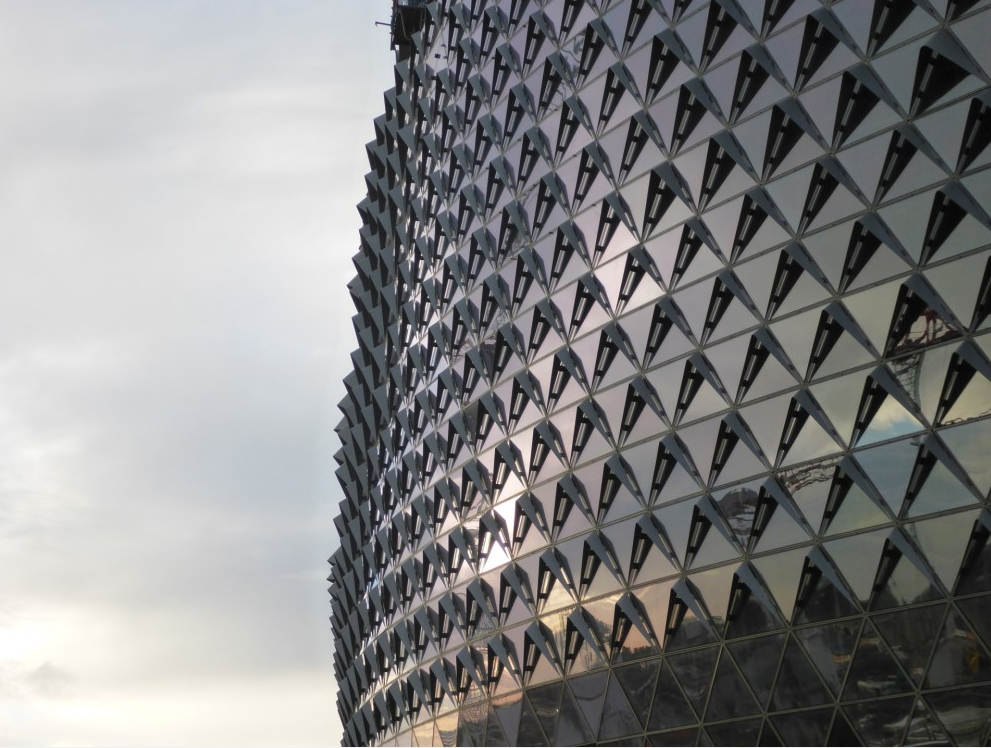 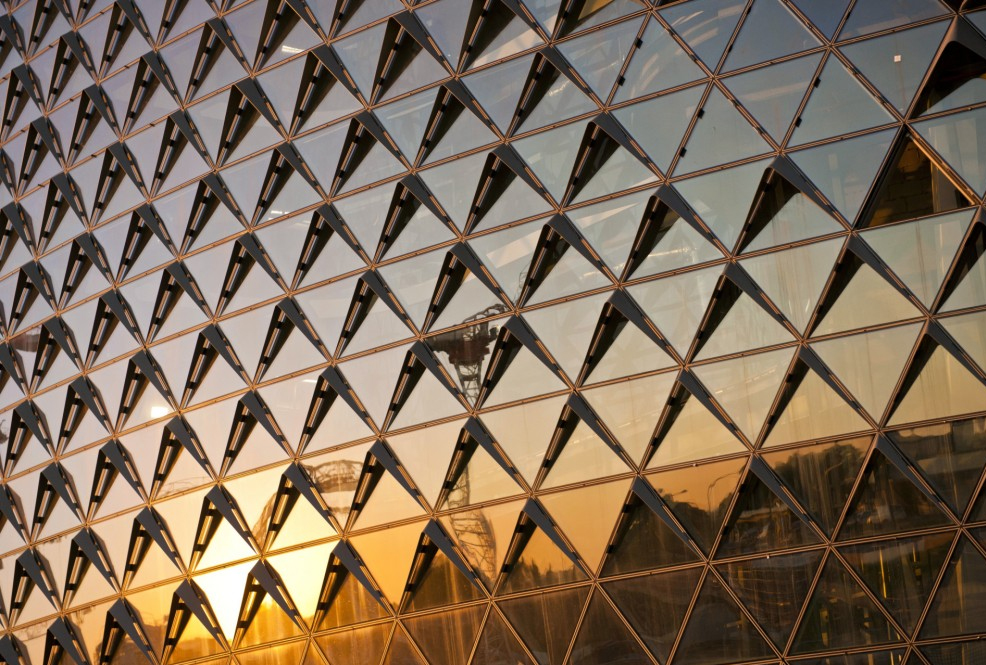 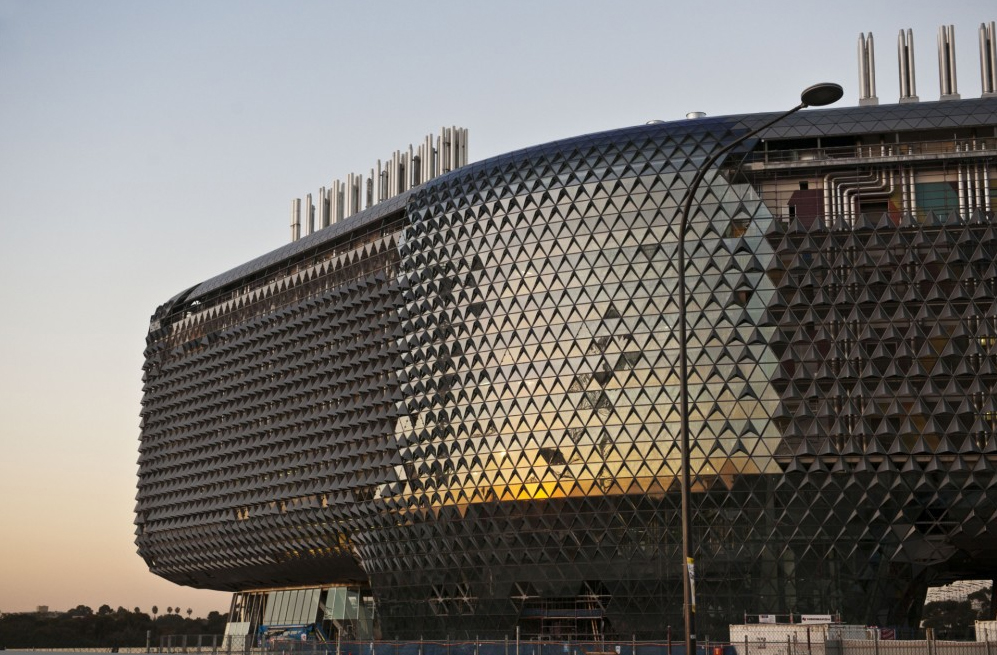 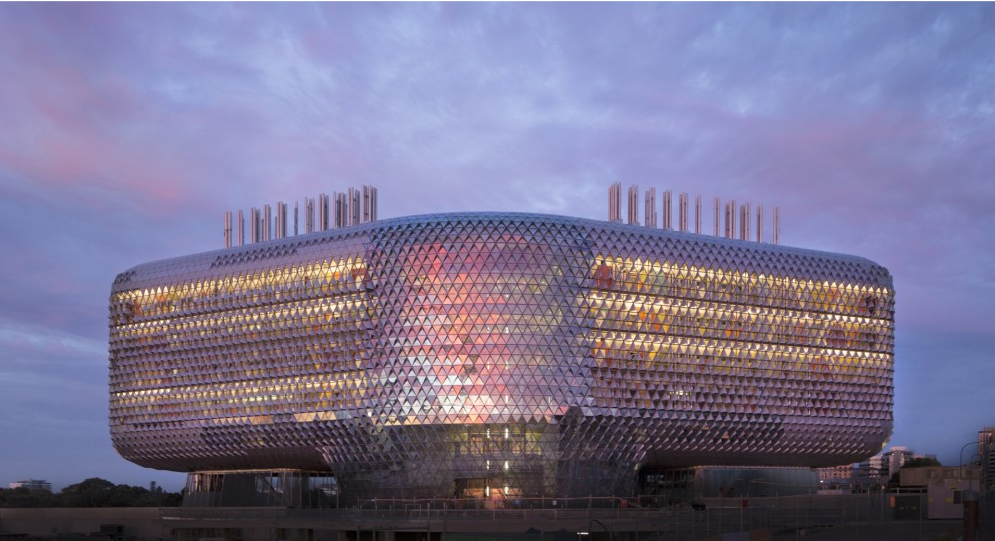 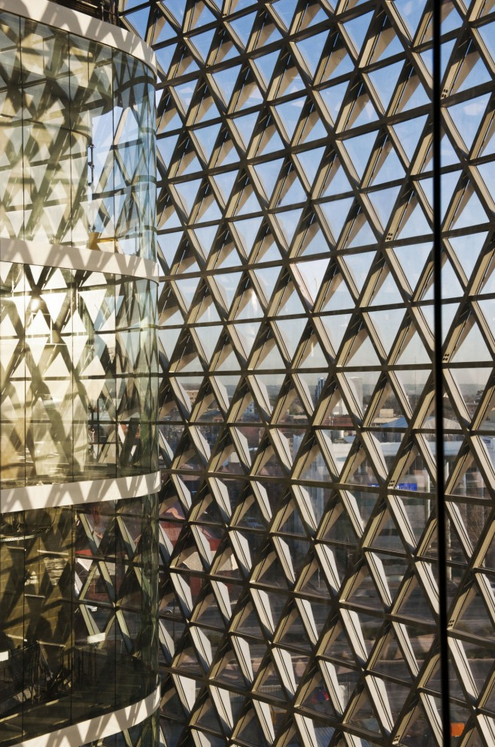 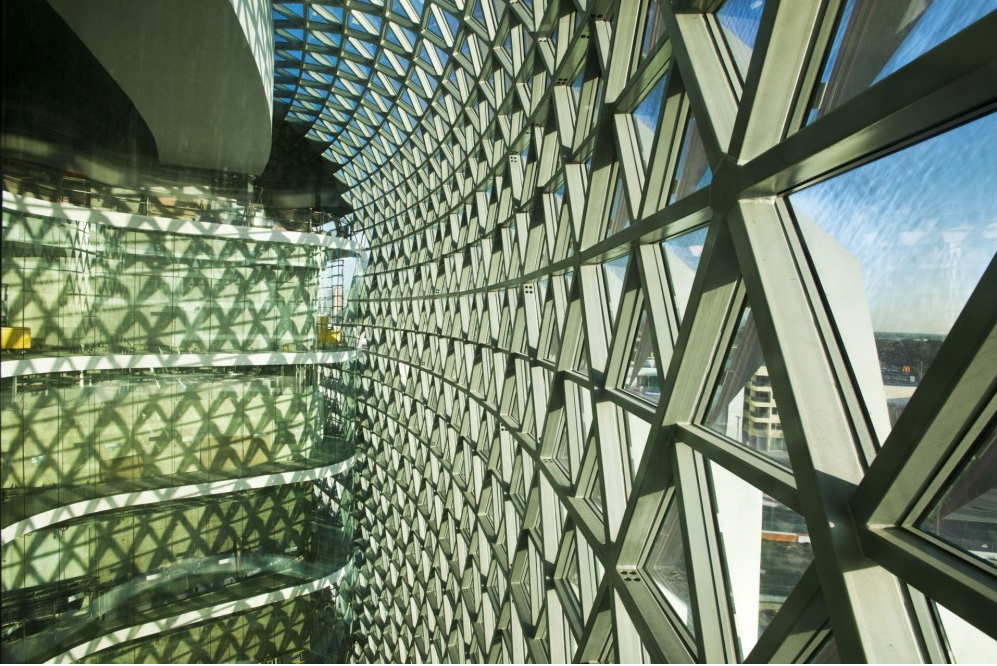