The Rosario Stock Exchange was founded on August 18, 1884, as a civil association without profit. It began its activity offering its facilities for market development of concentration that favored confrontation of supply and demand for products in general and enabling a greater price transparency.

While Rosario Stock Exchange was founded in 1884 being the second biggest, founded 30 years after the Buenos Aires, the present building dates only from 1929. This emerged in 1926 as a result of pre-tender in which the work was awarded to architect Raul R. Rivera. It is a neoclassical building, which in the manner of French academicism best finishes in the corner with an impressive dome.

The building has been preserved to this day respecting the original features that made it from his clearance in a landmark of the city.

The bags have the primary function to provide physical space to its partners so that they themselves brought into life and acts of trade negotiations. It aims to promote the realization of all types of negotiations on a framework of security, transparency and legality. In particular, trading of cereals, oilseeds and other agricultural products and byproducts, and securities exchanges. Within this context, various chambers shelter exchanges, trade associations and entrepreneurs, representing agriculture, commerce, industry and financial activity.

Rosario Bag is unique in that house, besides the Stock Market, Grain Market, the Chamber of Arbitration of cereals and vegetable oils, and the Seed Testing Laboratory (its main function is to perform the physical and chemical analysis of the merchandise to be loaded at the port of Rosario), among others.

In 1983, the study of the architect Mario Roberto Alvarez & Associates designed the new building for the exchange. Since then underwent a number of stoppages that accompanied the vagaries of local and national economy until 1990 that construction began. Currently, the building is a symbol of trading in the city of Rosario.

The new building is located adjacent to the first, facing the square Pring, micro center in Rosario. It is implanted in an area whose funds are institutional building of the Exchange.

The height of the building stands on the skyline, being the highest in the downtown area with 79 meters. This provides you with excellent views over the rest of the city and the river Paraná.

The building of Mario Roberto Alvarez is a tower with basement that is located adjacent to the existing building of the bags, accessories. Among them, a direct connection was established and smoothly, creating a spatial continuity while respected both the structure and details of the old building.

The modern rationalism contrasts with the neoclassical style by architect Rivera. The tower stands out in their language as a marked and homogeneous contrast horizontal turn blind to the volume of your basement.

Downstairs, the enclosure is removed from the building line, creating a courtyard decking.

The connection to the other building is done downstairs.

In order to give better service, the project was developed by focusing on the Procurement Board, which was adapted to the requirements of the demanding business world.

In the basement of the tower has been planned expansion of various activities which, today are developed in the institutional building, and also has equipment that can be shared use by the Exchange or the tenants of the new tower. In the first and second floor are located the double-height rooms for stock market activity.

A mezzanine floor houses a private area for members and, with independent entrance, a gallery for views from where we will see the Hall and the Hall Grain Exchange, and the first floor hall.

Between the 4th and 15th floor office rise. The structural solution, which left only two columns on each floor, gave him flexibility, allowing them to take and partition so they can have one, two, three or four offices.

The floors 16 º and 17 º finish off the construction work similar to previous floors of offices.

The building has two basements where is located a Convention Center, composed of an auditorium with capacity for 330 people. The hall has a stage with independent entrance, foyer, offices with private bathrooms, plus additional rooms, cafeteria and support units. The subsoil is connected to the ground floor by a wide staircase.

In the southwest sector of each floor of the building and connected to the shield of elevators, developed the core of common service to each floor, comprising an office, health of women, men’s health, officials and bathroom for engine room air conditioning.

The building has an entrance hall and seven high-speed lifts (150 meters per minute) that ensure the circulation of 1,000 people every 5 minutes.

Drawing on the experience of other similar buildings, the designers developed the office floors with perimeter eave, in addition to providing sun protection and rain water, makes cleaning the glass and allows the eventual escape to the fire escapes are located at the ends of the balconies. This wing was emphasized in the treatment of the facade in order to produce that strong horizontal feature of the work of architect Alvarez. 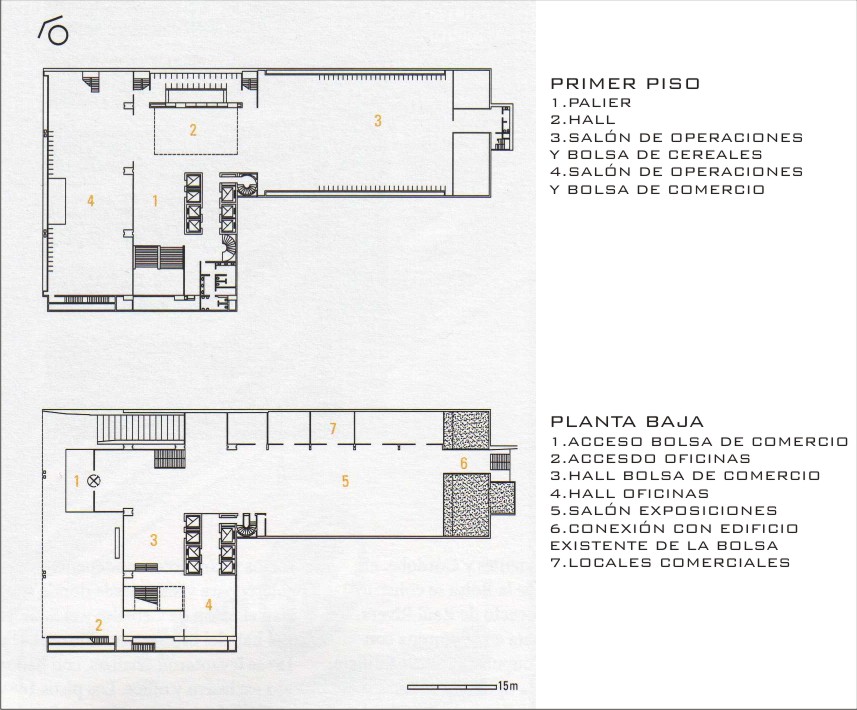 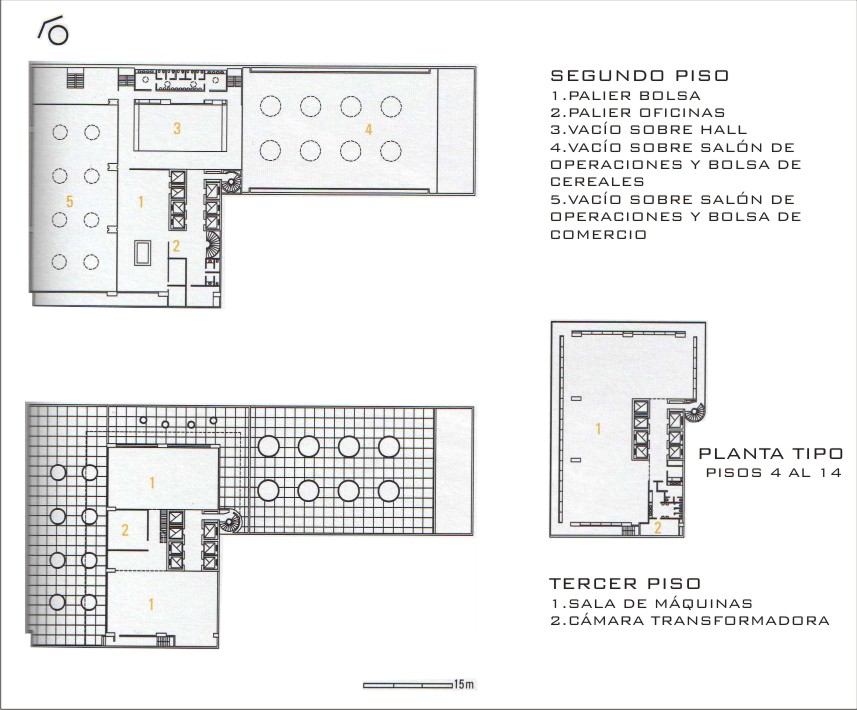 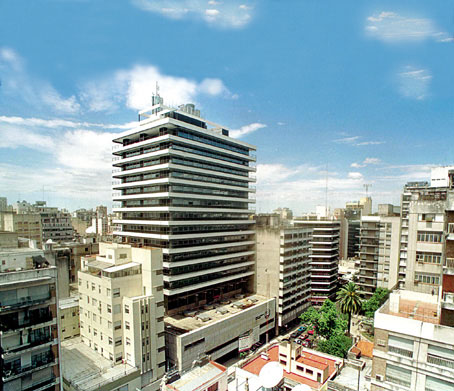 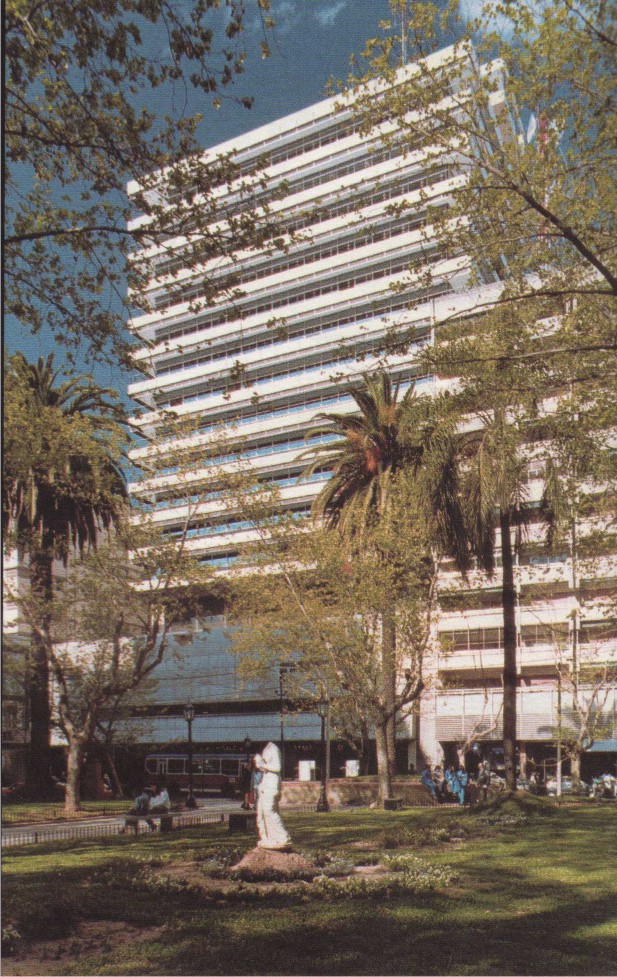 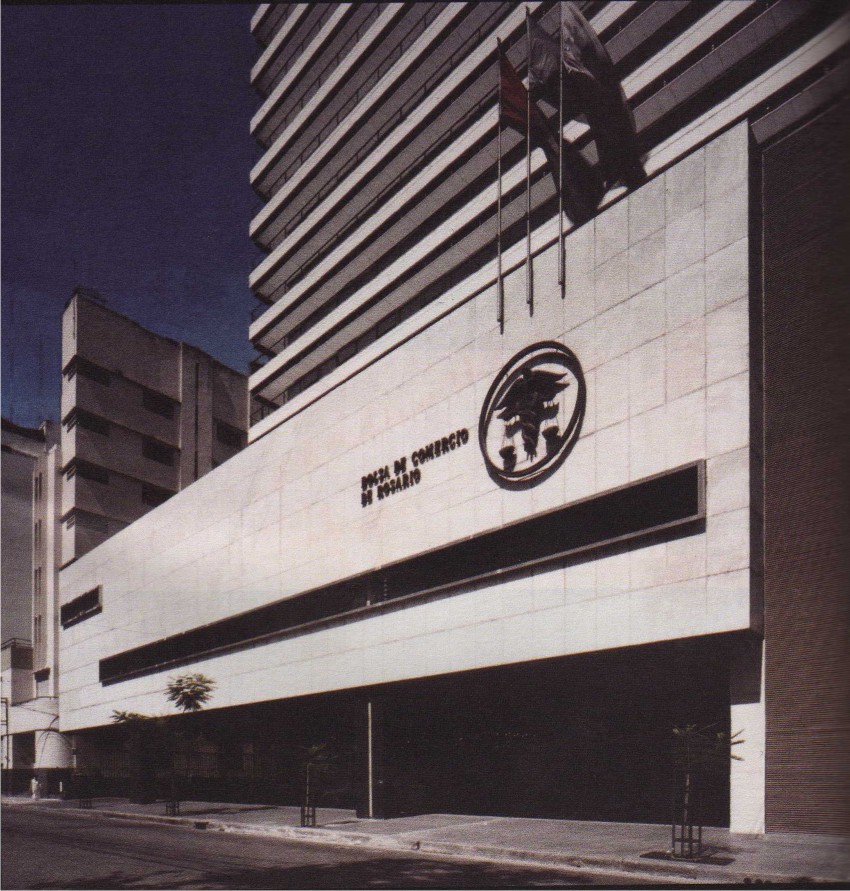 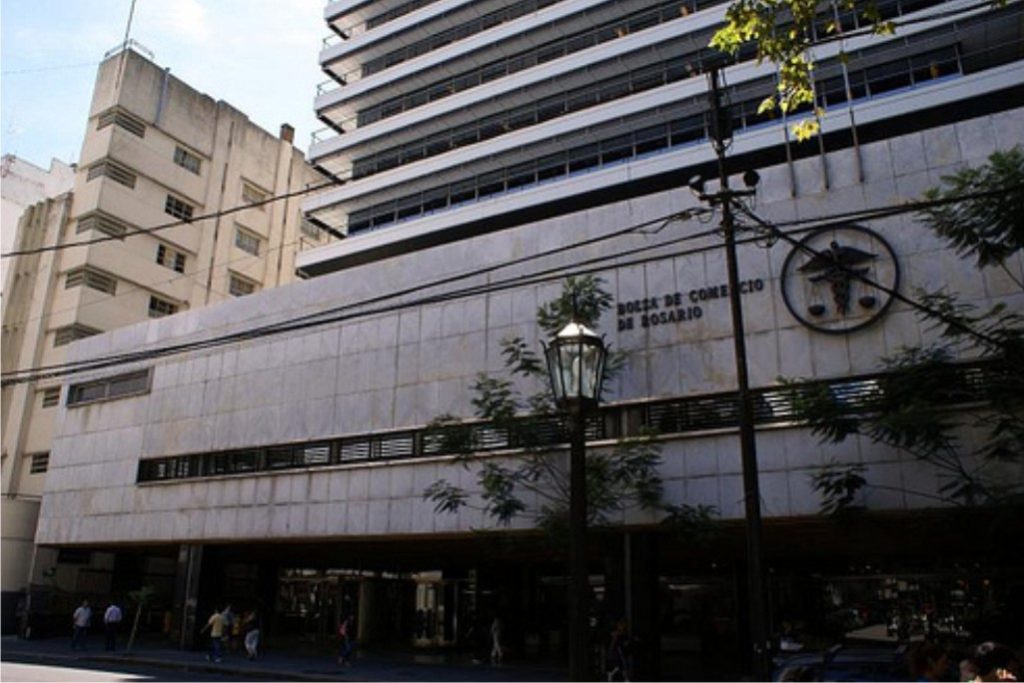 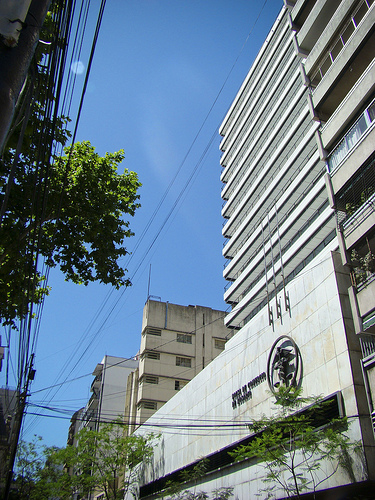 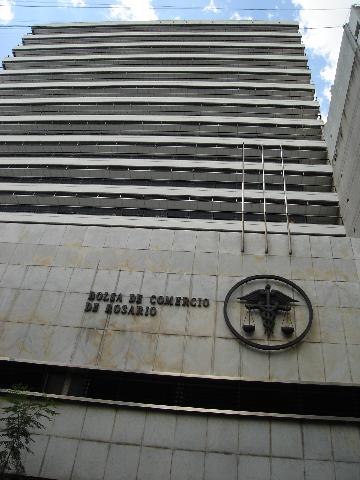 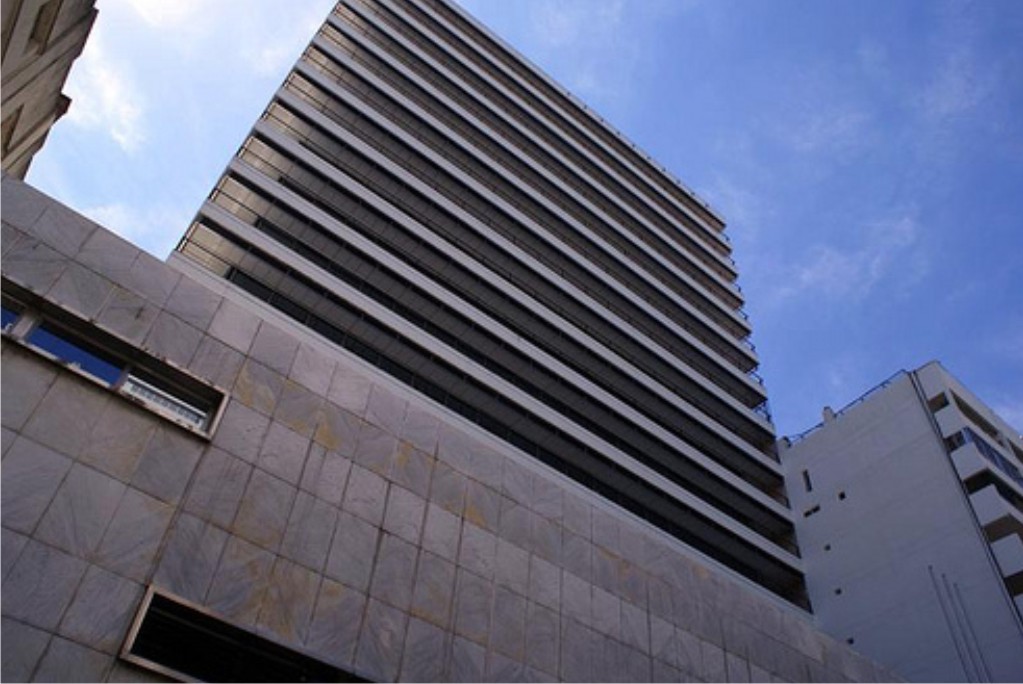 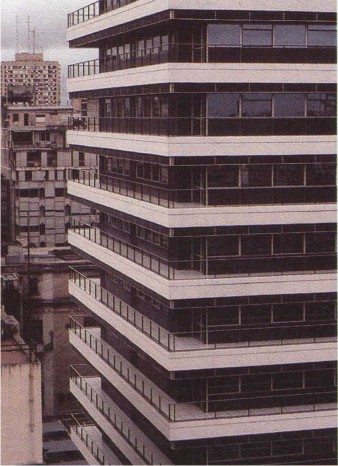 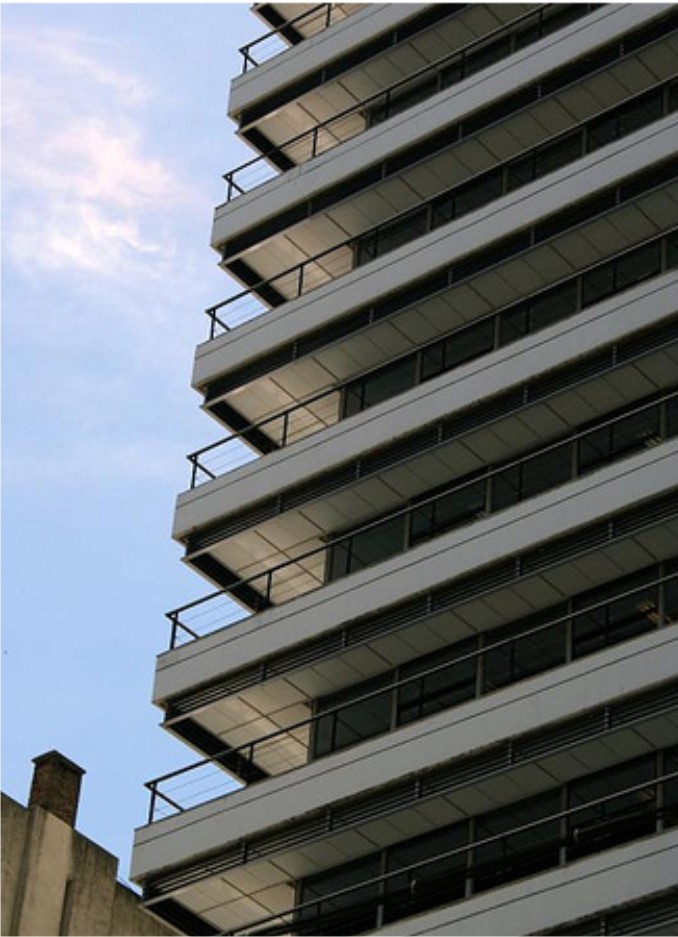 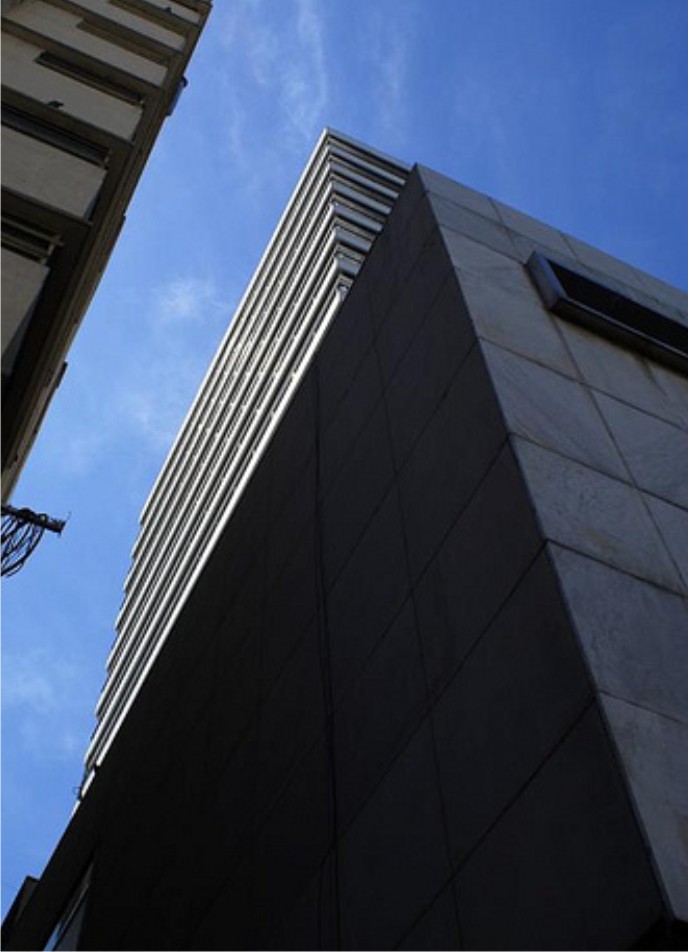 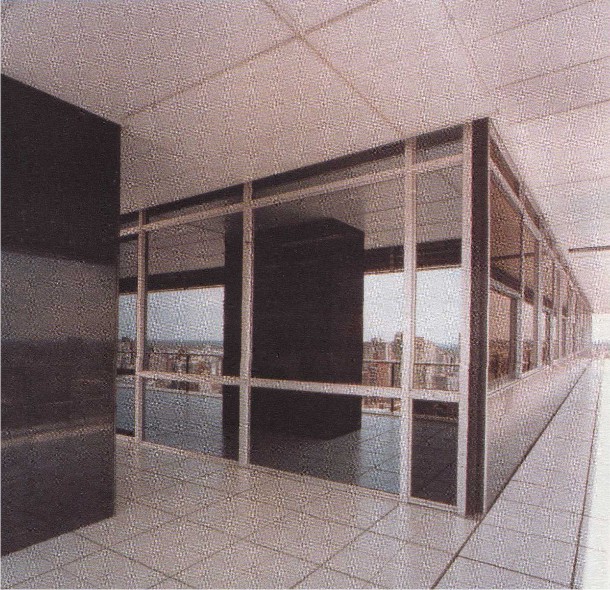 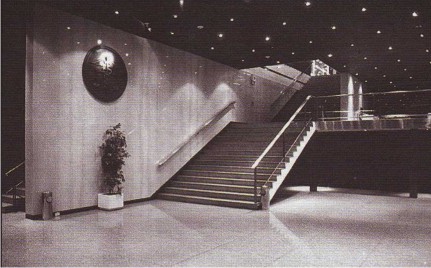 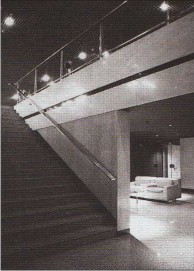 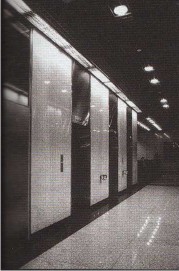