With the construction of these buildings Scharoun could make his first project post-project carried out by the local architect Wilhelm Frank. After numerous theoretical reflections, the architect in this work summarizes and implements all conclusions distilled over 39 years of experience, when construction starts was 61 years old. Like most of his projects, this is extremely didactic, from their trials and developments between expressionism, rationalism and functionalism, Scharoun tried to offer in this project an attractive and efficient while product implemented the industrial and economic use of materials.

Originally expected a larger complex, with a mix of different types of homes and houses, but due to its unusual plants, especially in the Julieta horseshoe-shaped building with tips, not the total project was approved the corresponding administration, so that the developer decided to build the first 186 homes and freehold flats.
Finally homes and made the whole was a success and allowed to continue making Scharoun tall blocks of flats with urban systems and improved variants on the ground. The first houses were decorated by the same architect and were sold in full before finishing the tower to the building Juliet, sales were made plan before starting the work. In a conservative environment in which predominate gabled buildings rise both in harmony and draw an unmistakable profile on the urban fabric, around which later developed urbanization.

Scharoun’s proposal responds to the high demand for housing and social facilities that arise after the Second World War. Theories Garden City, hygienism, return to nature, are concepts totally assimilated by society and in this context the architect thinks in buildings with various scales, the unit is detached house which is part of a “house greater “and collectively that is social housing, which in turn is part of the neighborhood. This neighborhood is considered an autonomous entity which together with other neighborhoods in urban fabric is formed.

As in most of the projects of the architect’s buildings grow from the inside out, with the facades just the result of what happens inside, the needs of its occupants. The two buildings are functionalist, based on repetition and strict simplicity, offering wide open spaces.

The innovations in Romeo and Juliet buildings were based on already known and previously experienced issues. For example sills windbreaks placed in overhanging balconies had already been used on the terraces of the Siemensstadt, as shields hung from the structure. Although the system construction replacing thin armed and bent plates, that Siemenstaadt were supported by hidden metal bars simplified in this construction, conducted 30 years later, which past the wrought conceal their thickness, by railings standardized tube steel mesh and double twist, in some cases lined with stamped metal parts.

Location of the plot

12,000m2 plot, allowing construction index 2,6m2 per m2 of the same. Scharoun proposes to build 186 homes, garages, gardens, local shops and services, a total of 31.000m2 on a relatively small plot. To obtain the proposed meter combines two opposite types, the vertical tower and a linear building gallery organizes multiple functional and circulation including spaces, expanding the size of the place.

The tower was the first building to be constructed as a central and representative element of a broader but the project was never realized, then the second building was erected. The name was thought after its construction, realizing the duo that formed the two buildings that were annulled alone the rest of the project, Romeo tower and the building was called ring-shaped Juliet.

The top of the hill is a point where numerous roads and crossroads Romeo brand building with 19 floors above the smaller and Juliet Building under intersect. The terrain is conical and Juliet extends outwardly at its widest end, while Romeo, at the narrow end, compacted in the sidewalk by the shops downstairs.

Along the north side, between the two buildings and stables mode, two rows of private garages for residents of the buildings are located, and on the south side, between the blocks, a heavenly, intimate and surprising garden appears. In the assembly with secondary Romeo east tower building also houses the garage also has some shops, meeting numerous details are produced by minor elements such as major steps, meeting places or passages, both outdoor and covered.

The Romeo building, located on the east side, returns with its 19 plants an organic development of the heights, 196.97 meters. The outer most striking feature is its cantilevered balconies with pointed toes and oriented towards the sun. This detail, together with the also pointed roofs and outgoing staggered building blocks Juliet gives the whole structure a dynamic, almost expressive character.

Although as its neighbor, the building has several entrances, the main entrance is on the 40 Zchozacher Strasse.
The core communication Romeo building has two elevators and hoists with a ladder next to sum this and other service staircase in the center of the north elevation, each located at the ends of corridors that lead departments.
On each floor 6 dwellings that are accessed through an interior L-shaped hallway illuminated by both sides and overlooking qualities that sweeten this Community horizontal space is distributed. The stories are all kept very compact to reduce the disadvantages of the solution riders, these being short enough to enjoy daylight and views from the side and end, while the floors are arranged radially so that four of the six housing each floor can be seen by both sides.

The departments of each plant are different, they vary the measures and distribution, as in the case of single people, families of four members or other variations, giving rise to a varied pattern of occupation. The apartments range from one to four bedrooms, ranging in size from 38 to 96m2. The largest were located at the ends. According planes in Romeo Building 17 one-bedroom apartments, 32 two-bedroom apartments, 17 two-bedroom and a half, 17 three-bedroom, 17 four to five bedrooms and three duplex with separate access for each plant are declared.

The first floor has a restaurant that creates a compelling connection to the public sphere.

The Julieta building, located in the western part of the plot, more intimate area is spread over three blocks of 5, 8 and 12 floors each, with a total of 82 Apartametnos. Stresses the shape of your plant, a curved slab horseshoe facing south, whose access to housing are made through external galleries. These galleries are in him access concave side, approaching the entrances to homes and causing users to maintain visual contact with each other, provide a service to between four and nine flats per floor. Use of space at the entrance while the departments fan out on the opposite side to enjoy the view and the sun, seeking independence. This building, although it has more floor area occupies less space on the plot and as it is staggering loses surface for homes and gaining lean. There is a basement where the engine rooms and entrance from Haldenrainstrasse were located.

Unlike his partner, building departments plants and Juliet are fairly consistent measures, mostly family homes with two large bedrooms, with surfaces between 72 and 86m2.

The type plant in Juliet shows that it is not strictly necessary to adopt a strictly orthogonal to organize hierarchical logical and coherent program housing. Because of the branched distribution, the lobby becomes the hub of the house, leaving the wetlands and adjacent light less need to access gallery. The spaces grow as they move away from the entrance and the rooms are in the form of L, differentiating spaces that develop different activities during sleep. The largest Ambienta housing is the living room which has a second orientation toward the terrace also has connection to the main room, allowing dual circulation circuit and a visual enrichment. This further development of the circulation, together with the absence of right angles carries certain disadvantages when furnishing the rooms.

The exception forms are the departments of the extremes that have another bedroom and different treatments on your plants, details that should not draw attention to an architect as Scharoun always sought the detail that differed in this case these endings to distance themselves from the classic and repetitive fire escapes that had placed other architects. In the building Julieta each element is treated as a special case. The repetition of one plant to another is difficult to avoid without fear of structural complications, but we can provide a basis and a special coronation to a stepped section for phasing story is what made Scharoun. In the gardens next to the building there is a pond with fountain.

The core of vertical communications in the Juliet building also contains the stairs two elevators and hoists.

On the roofs of both blocks are no studies with large windows and terraces sloping gradually phased in for Juliet to be changing its height from twelve to five floors in a spiral progression. 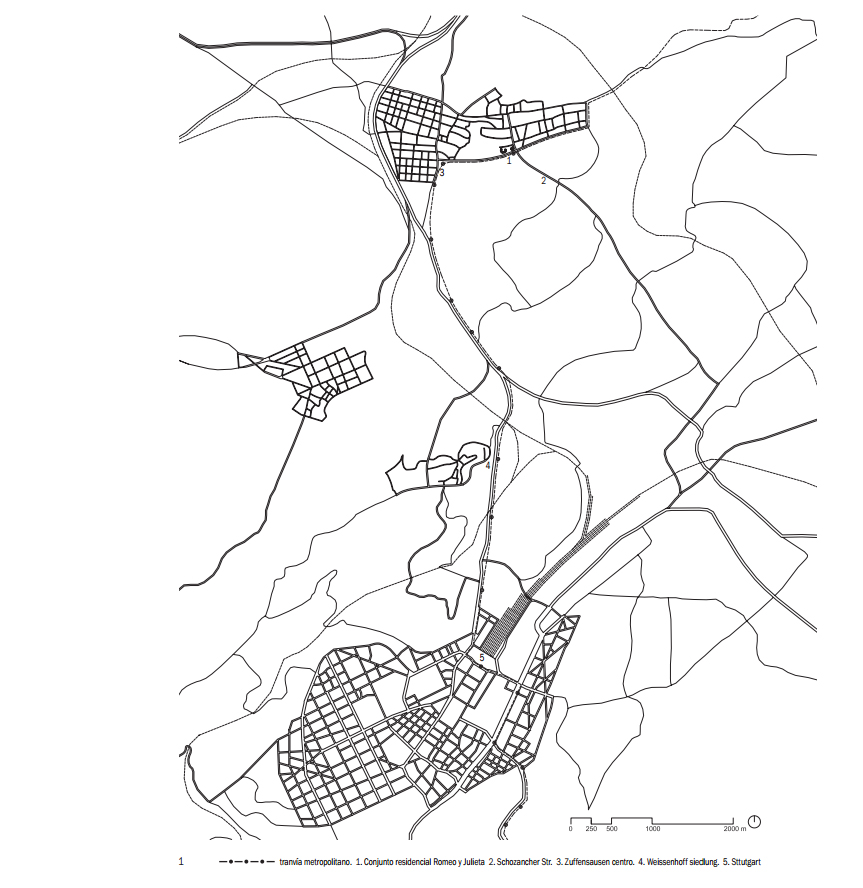 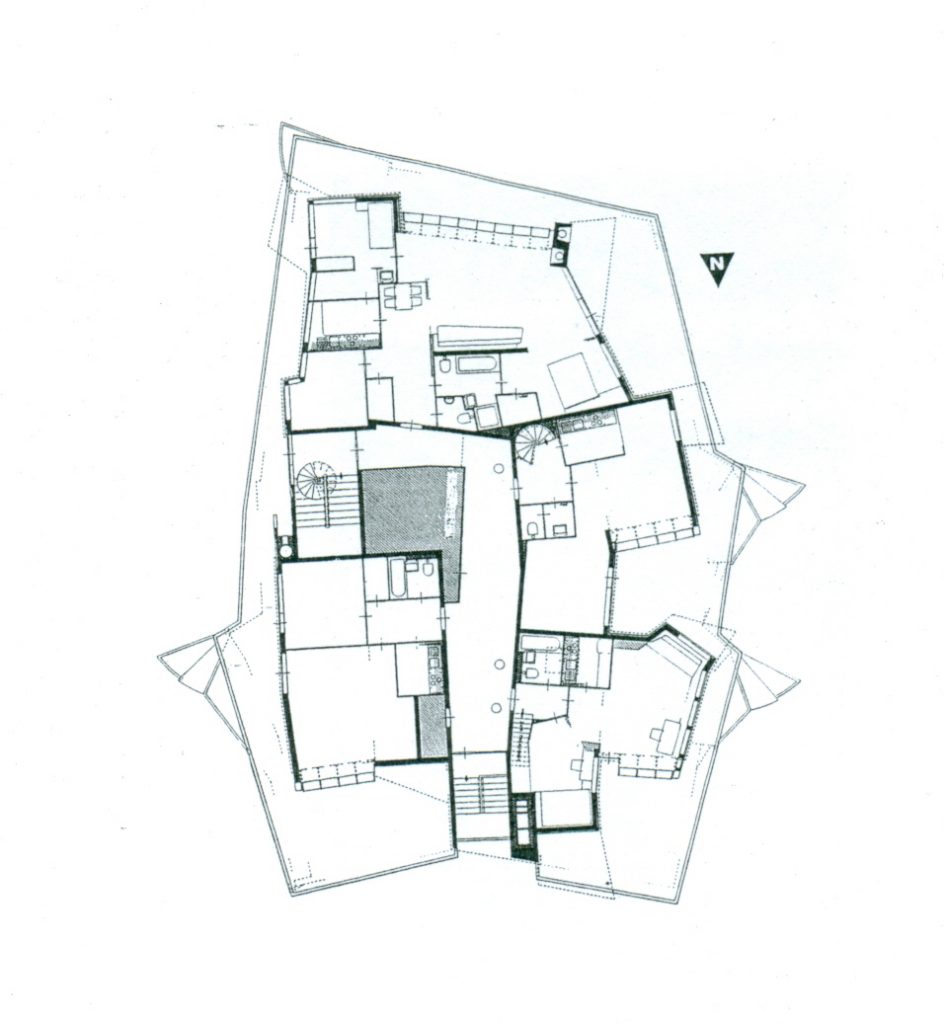 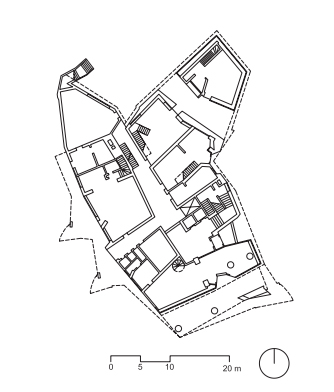 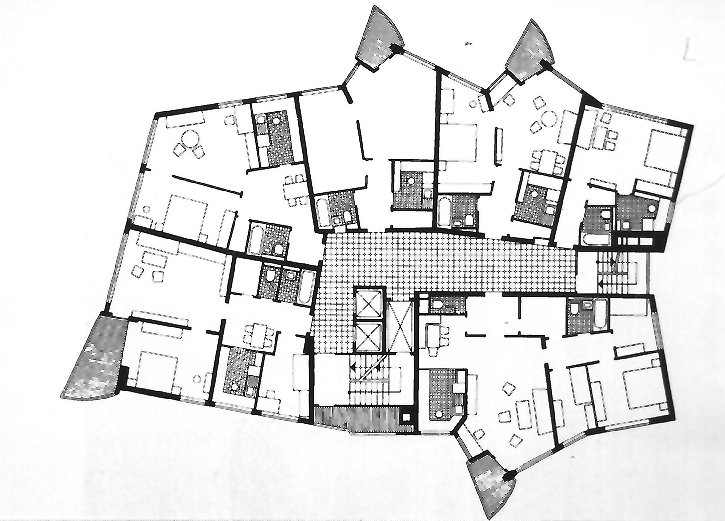 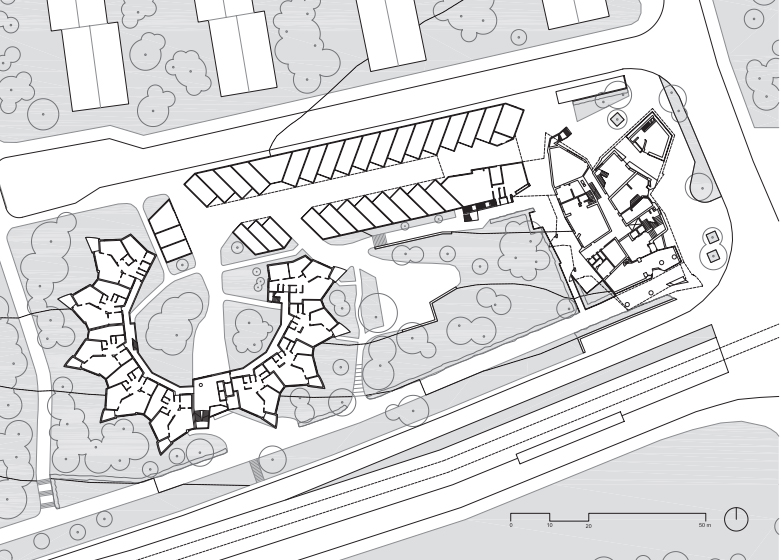 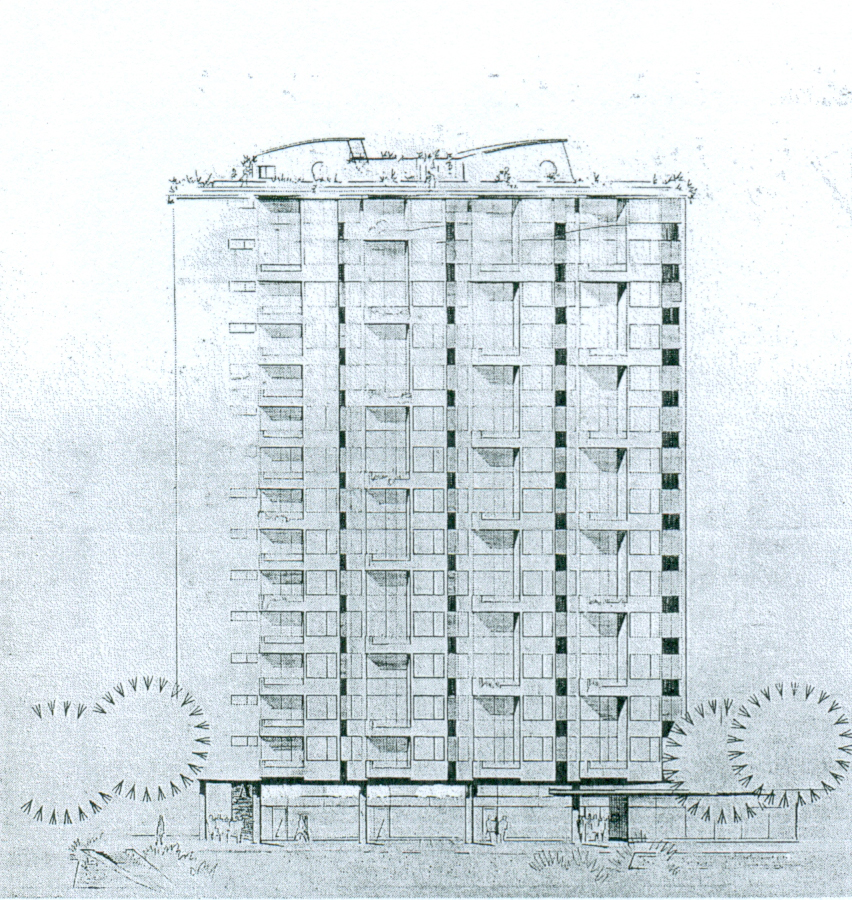 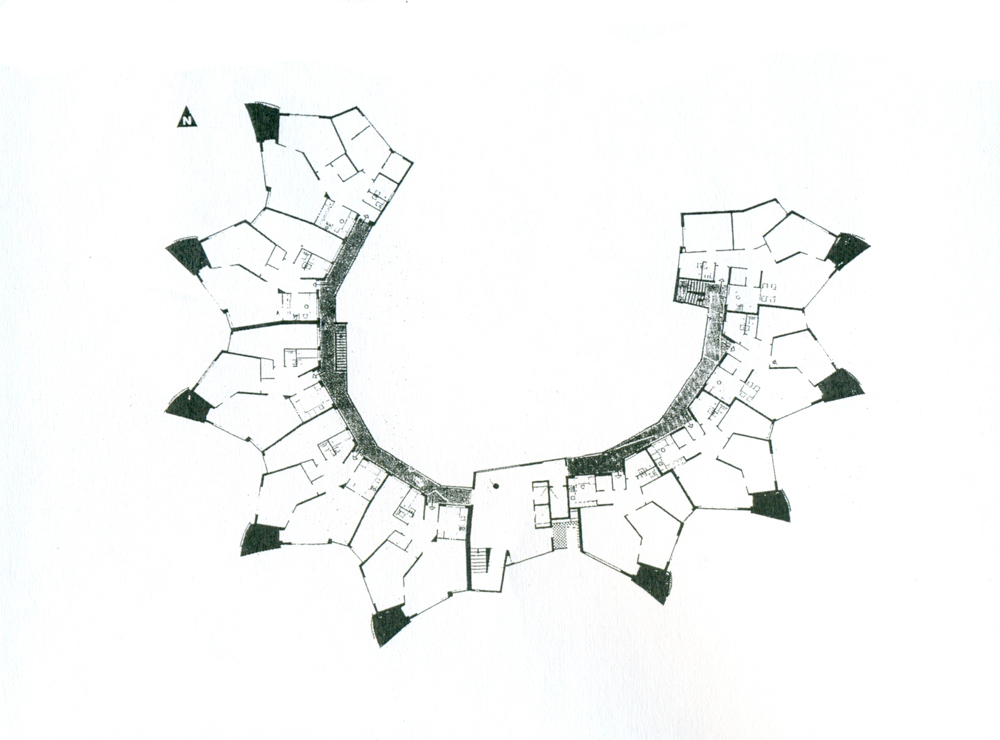 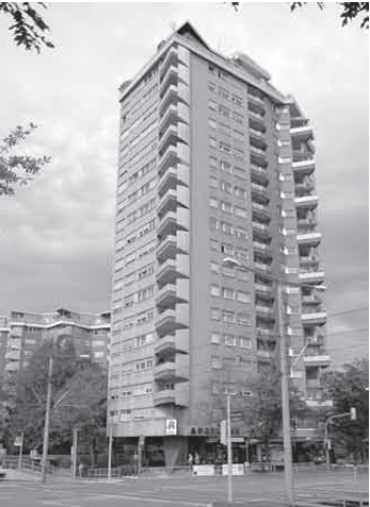 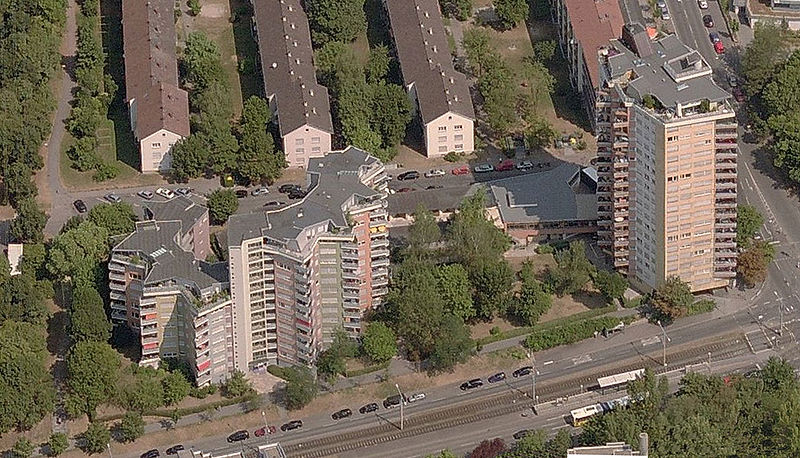 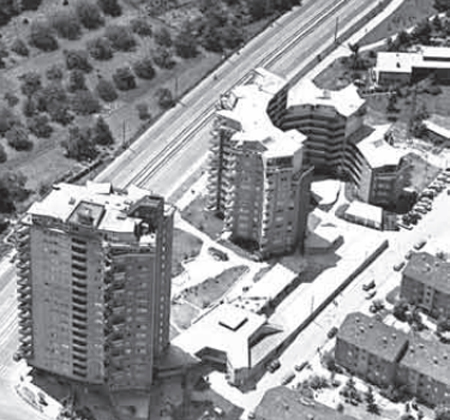 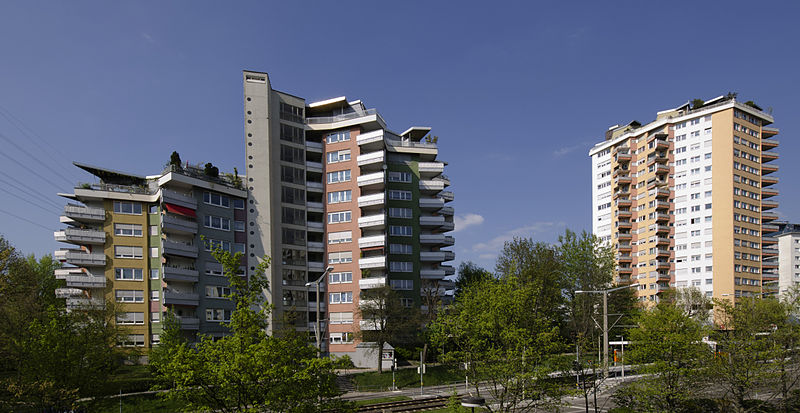 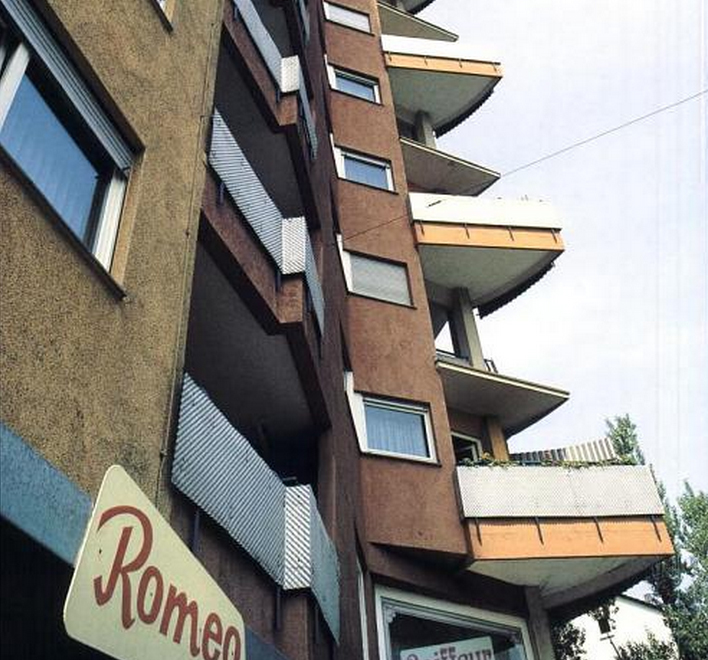 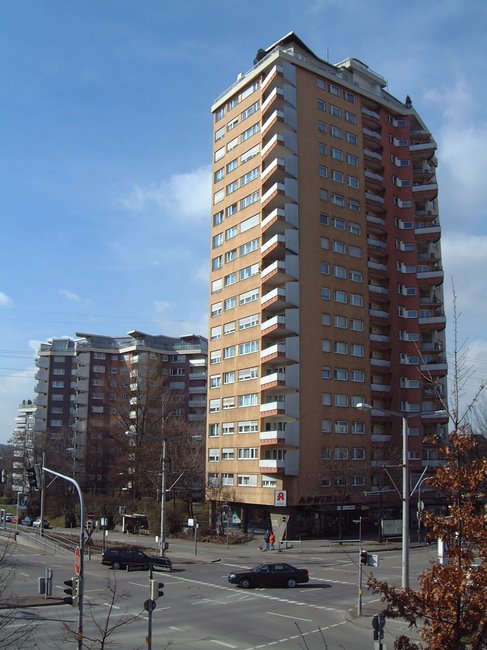 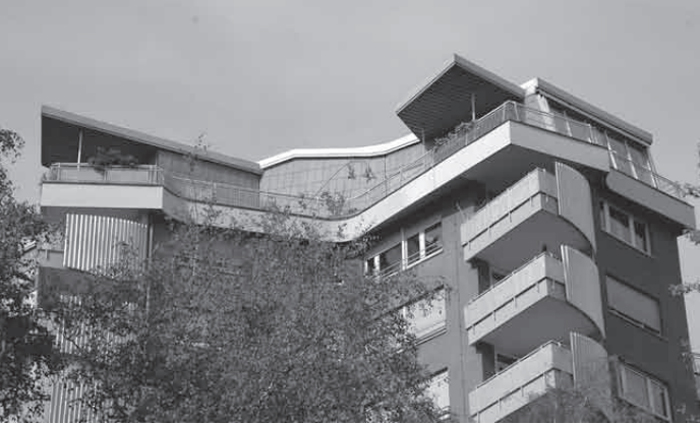 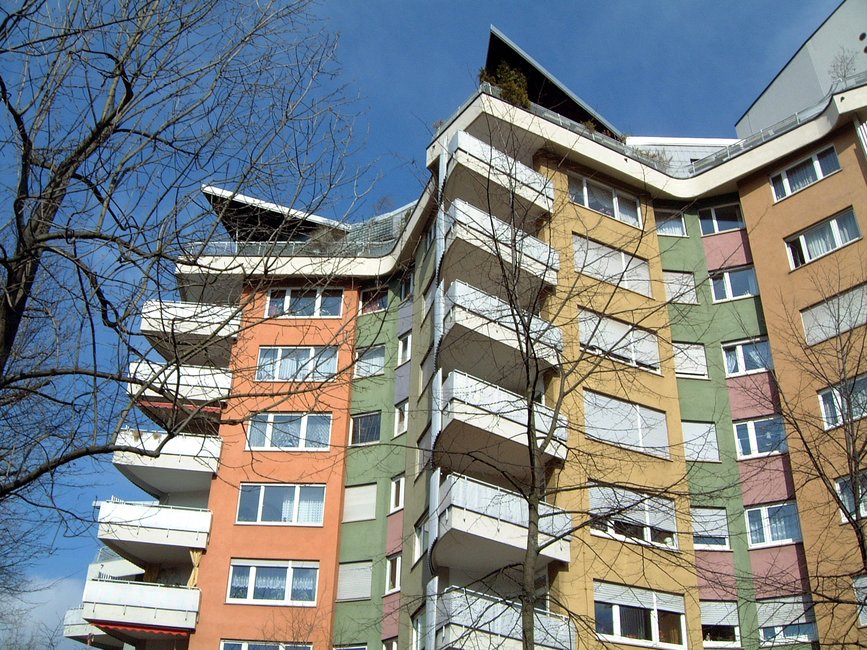 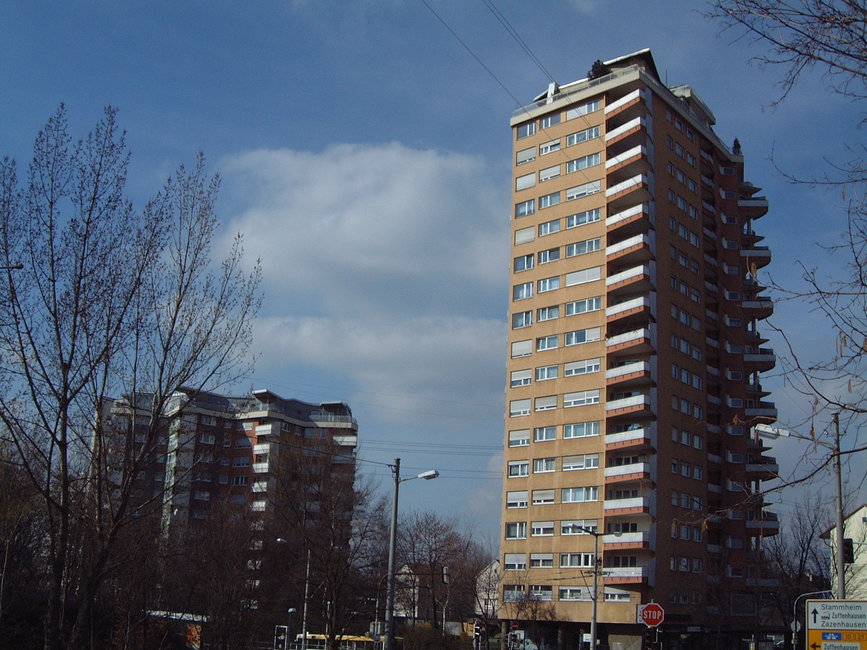 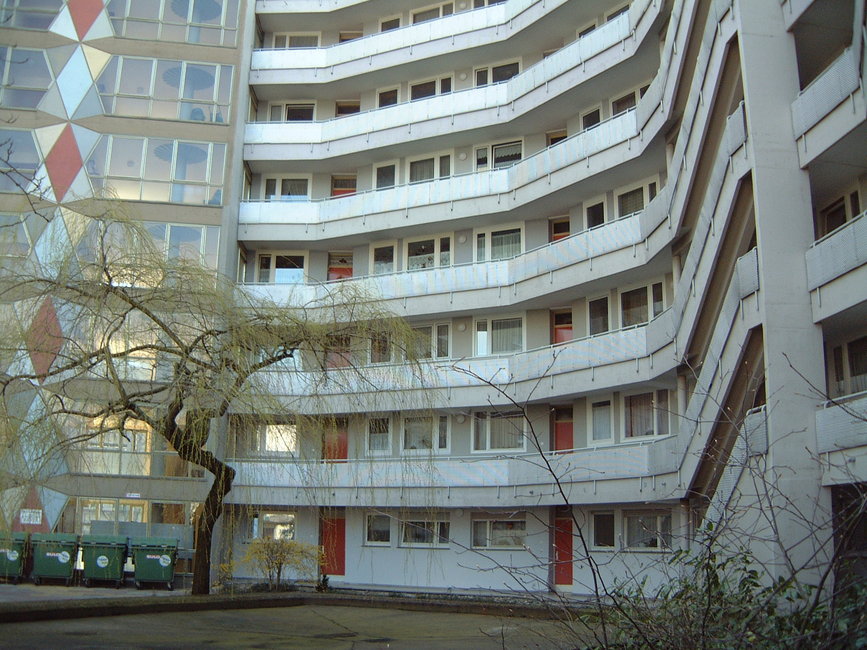 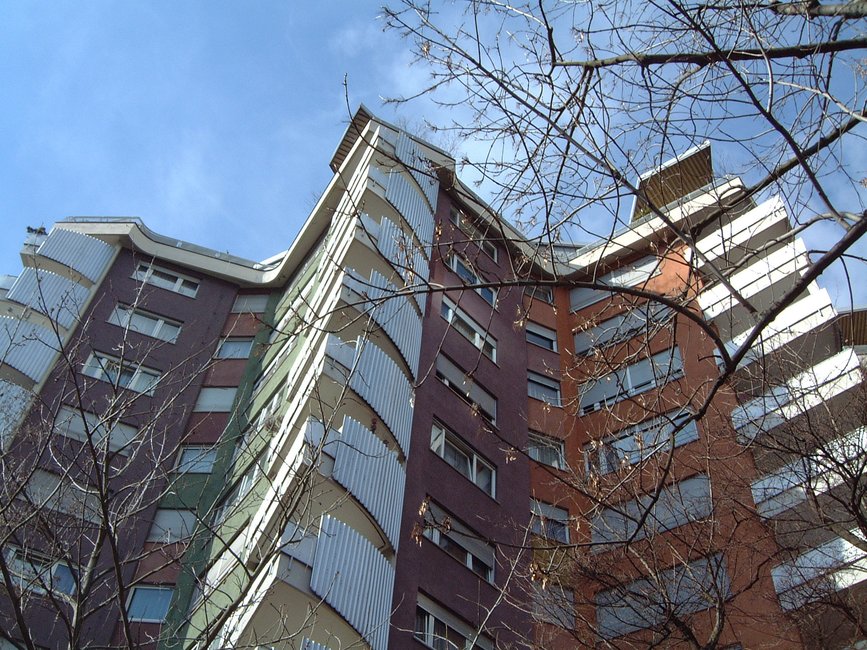