Rome Termini Station is, together with the Tiburtina station, themost important railway Rome station and one of the largest in Europe.

The first building, designed by Bianchi, dates from 1867. However, it was demolished in 1937 to make way for a new station on the occasion of the World Fair of 1942 (E42) in Rome. Following World War II the World Fair was cancelled and the works were halted after the fall of Mussolini in 1943. At that time, architect Angiolo Mazzoni del Grande completed two wings of one kilometer long. After the war, in 1947, the Italian government made up a contest for the further completion of station.

Two teams of architects won the competition: Leo Calini and Eugenio Montuori on the one hand, and Massimo Castellazzi, Vasco Fadigati, Achille Pintonello and Annibale Vitellozzi on the other. As an expert in concrete construction, they drew on engineer Pier Luigi Nervi. Around 1950 the new building is ready in its current form. It consists of a long wall that runs counter to the two wings of Mazzoni. Between the old and the new wing a covered gallery was introduced. Located behind it, there is a building as high as the two wings. Here are offices. Eccentrically placed in this building is a large transparent hall with ticket counters. Typical of the hall is the curved roof. The restaurant is located north of the hall and is abruptly separated of it by the remnants of an Etruscan wall.

The current structure of the railway station Termini in Rome was inaugurated on the occasion of the Holy Year 1950 and includes the old wooden building designed by Bianchi 1867. The works were carried out in the area of the Esquiline Hill, near the Baths of Diocletian and which station probably takes its name. 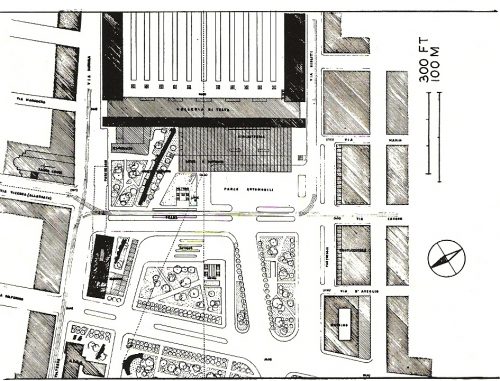 Roma Termini Station is located in the Roman quarter Termini and is situated directly opposite the Baths of Diocletian, Rome, Italy.

The station is part of the Esquilino area, a name derived from one of the seven famous hills of Rome. It is not a very attractive area: large buildings, very few green spaces, traffic and much noise. In the Piazza dei Cinquecento is the terminal of long-distance buses, the subway entrances and parking areas for taxis. The station location is remarkable. Both the old and the new complex is integrated into their way through the urban context. The remains of the old Serbian wall, 80 meters long (sixth century BC.) Were integrated into the new part. Since 1955, the station has a connection to the underground network and an underground shopping center Forum Termini.

The first station, designed by the architect Salvatore Bianchi, was based on the station Gare de l’Est in Paris. The current structure of the Termini station comprises one of the most significant buildings of modern Rome, highlighting the contrast between the perspective of the long lines coated with travertine buildings and the curved shape of the front gable plate. The building fits into the history of modernist and organic architecture of the 50s, but also in modernism and futurism during the time of Mussolini. Organic architecture was primarily an alternative to the previous monumental architecture. In the book Visions of Utopia Terry Kirk, we read: “Organic architecture is both a social, technical and artistic activity aimed to set the stage for a new democratic society.” The different parts that make up the complex were criticized based on this context. Mazzoni work consciously forgets although both parts of the building show a quality that rivals the ancient ruins, forming a strong and inseparable “whole”. Marco Ferrero at La Stazione dei Grandi Eventi tells us: “… the Stazione Termini, despite being the result of the combination of heterogeneous elements, is an organic whole in which the different objectives and designs create antagonisms instead of contrasts…”. Reading the story of the season we see the complexity of architectural production during and shortly after the fascist era in Italy and the continuity occurs rather than a radical break.

The never-built monumental frontal façade and the built wings of Mazzoni were soon after the war heavily criticized. Kidder Smith tells us in Italy Builds: ‘This increasing pressure of the war forced a stop further to the monumental work and with frontal part was fortunately never constructed. With the clearer, more democratic post-war atmosphere it was soon realized thats the station should not be completed as designed… ” He even refers to Mazzoni’s project as “this monstrosity”. The new part, however, was described in the post-war literature as a transparent and modern building that symbolizes the new democratic values of the Italian Republic. 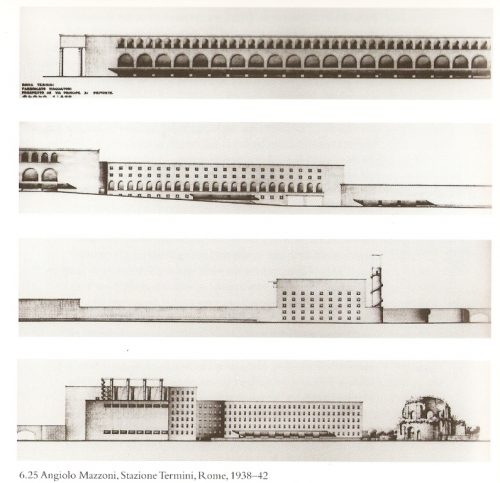 But recent research re-evaluates the work of Mazzoni, after years of harsh criticism. Moreover contemporary architecture critics ask themselves whether the new building really is a break-up with the past or just the continuation of tradition. Unlike Nazi Germany, futurism and modernism in Italy was not associated with communism and modernism, moreover it was even used for state representation. This is completely contrary to what the media tells us in the early fifties. William Curtis in Architecture since 1900: “In reality, Several of the pre-war ideas and personalities continued to operate. Some of the best work extended the premises of the Italian ‘rationalism’ of the 1930s. The Termini Station in Rome was a clean-cut, modern structural idea integrated with a restrained classical rectangular exterior containing subliminal echoes. ” The whole station is also a rather interesting compound in its whole, different ideas that were circulating before and after fascism come together in it. 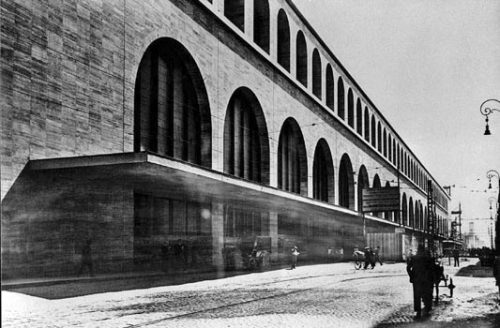 We find both analogies and contrasts in the comparison of the architecture of Mazzoni and the team-Vitelozzi Montuori. Mazzoni chose as a lateral organization of the station and Montuori Vitelozzi an almost-futuristic flow through the end building. Both also have clear classical references. An example of the quality and diversity in the station part of Mazzoni, can be found in one – the public – unknown courtyard near a conference room. The way the columns were handled, is reminiscent of the architecture of postmodernism. The travertine stones were turned 45 degrees and staggered above each other to make a sculptural facade.

The first architect, Mazzoni, fares in its various construction styles. His designs ranged from overtly bombastic, neoclassical, radically modern to futuristic. The two wings designed for the station have been conducted in an austere, neoclassical style. Both have high walls with perforations in the form of arcades or rectangular windows that are covered with travertine. Inside, the walls and floors covered with mosaic tiles and marble from all over Italy. Also sandblasted brick is prominent. The impressive brick arches remind you of old Roman structures. 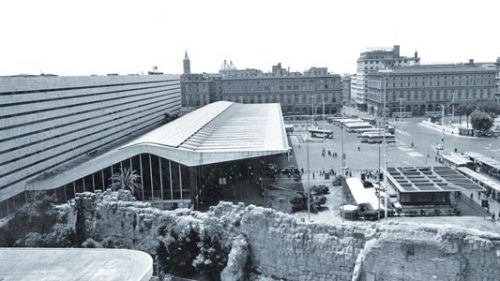 After nearly half a century of decay, the wings were thoroughly restored in 2000. The later ‘modernist’ end wall is clad with precious travertine. The facade looks austere and monumental, but is countered by the organic hall with ticket counters. This transparent building has an undulating, cantilevering roof. 33 curved ribs of reinforced concrete makes up the roof of the hall. Inspired by the curvature of the arch of the adjacent Roman wall. The building fits in the story of the modernist, organic architecture of the ’50s, but also in modernism and futurism during Mussolini. The organic architecture was primarily an alternative to the earlier monumental architecture. In Visions of Utopia by Terry Kirk, we can read: “Organic architecture is at once a social, technical and artistic activity directed to create the setting for a new democratic society”. The location of the station is remarkable. Both the older and newer complex deal in its own way with the urban context. Thus, the remnants of the Serbian wall 80 meters long (6th century BC.) were integrated in the new part. Since 1955 the station has a connection to the underground network and an underground shopping center Forum Termini. 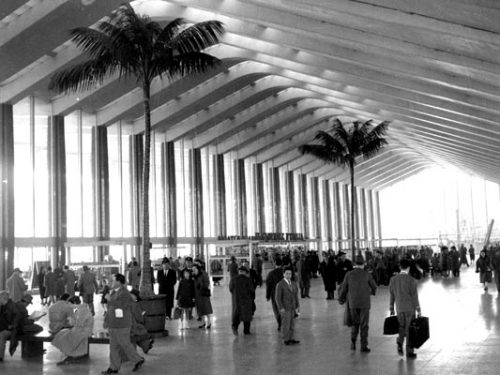 The contrast between the work of Mazzoni and team-Montuori Vitelozzi plays an important role in the history of the Roma Termini station. We see how this contrast is magnified and is affiliated to a political, ideological context. Largely based on that specific context the different parts of the complex were being criticised. Mazzoni’s work is so consciously forgotten, although both parts of the building show a quality that rivals the ancient ruins and together they present a strong and inseparable whole. Marco Ferrero in La stazione dei Grandi Eventi teaches us: “Stazione Termini, in spite of it being the result of the combination of heterogeneous elements, is an organic whole in which the different targets and designs have create counter-positions rather than contrast”. By reading the history of Roma Termini, we see the complexity of architectural production during and shortly after fascism in Italy and how continuity rather than a radical break-up occurs.

After nearly half a century of decline, the wings were fully restored in 2000, when it opened in the basement of the complex the Termini Forum, a huge mall of 14,000 square meters, which transforms the station into a true city center.

The station is covered, both internally and externally, with the best types of Italian marble, including the area of arrival and departure of trains which are repeated in a rhythmic manner coatings with marble and mosaics.

In some of the interior walls, mainly in the wings made by Mazzoni you can appreciate the use of sandblasted brick walls both in the large arches.

After the last restoration thousands of small colored tiles are tiles covering the roof of the “dinosaur” in the area of ticket sales. Approximate number of tiles used in the decoration of the court: 861,000.