Makuhari residential complex designed by architect Steven Holl. In this paper, Holl emblematically concrete achievement of the principles guiding its architecture, characterized by a remarkably philosophical and conceptual approach to the project theme.

The goal is the spatial reorganization of some lots, which have been entrusted to various architects, to safeguard the variety and grace of spatial experience. Holl’s intervention, in particular, focused on a complex of 6 buildings of mixed residential and commercial.

The complex includes 190 homes, shops and public use areas. Despite many obstacles, the idea of ​​Dutch architect persuaded his client, Mitsui Fudosan Group, beginning construction in 1994. The long struggle led to the construction of a single space. The result was achieved through the joint efforts of all involved, including the customer and developers.

The architect uses figurative and conceptual references about Japanese culture in his work, beginning with the name of each of the buildings: Sunlight, Blue Shadow, Fallen Persimmon and House of Nothing. These names refer to the feeling of tranquility and elegance of a mythological world and distant that the architect intended.

The Kajitsu is one of the principles underlying the architecture as the foundation principle of each project “lies in the material and spatial expression of a spiritual intent,” becoming a “balance that bind the physical and intellectual intensity and power to touch the mind, eyes and soul. ”

Is also evident in the complex, the will of interaction between cultures, fusing the contemporary trend of globalization and standardization with the revaluation of the customs and local traditions.

The work was credited with numerous awards, among which include the NYC AIA Architecture Project Award 1993 in the U.S. and Japanese Building Contractors Society Award 1999 in Japan.

It is located in Chiba, and stands on a filling of dredging on the shores of Tokyo Bay.

The intervention, planimetric level consists in breaking the original structure corresponding to the four cardinal points, to create “gateways” and in the construction of a new building in the center of the courtyard to create two smaller gardens, called patios.

The residential complex consists of six buildings on the underlying principle is the contrast between: active structures light and heavy volumes silent. That is, the buildings are interpreted in two ways.

The general concept of active structures quiet building is a different way to obtain the range required by the regulatory plan of the city.

This project has given special importance to public space. Normally in residential projects promoted by real estate companies, the common space is minimized, because it has little commercial value. However, in this case, the open space is conceived as an integrator in the complexity of the site and of crucial importance to residents of the new city.

The architectural language used by Steven Holl has always been based on the adherence of the project to a preliminary concept. This method, which is in all his works, has helped to design buildings in unit terms, avoiding the danger of fragmentation. In addition, it has allowed investigate the quality of light and the fluidity of forms, allowing you to perform the work as a “unicum” in an unmistakable connection with the place. It is far, in its aesthetics, any form of brutality or reference to the component at night, “sick” by the contemporary: the quest, here, by contrast, is aimed at creating a harmonious, livable, peaceful.

The buildings are interpreted in two ways: first, those who harbor private residences, and other buildings for community use.

The residential buildings are characterized by massive and continuous shades of reinforced concrete, with its “weight”, fulfill the function of protecting the streets and public spaces context of the whole, consisting of the gardens and the large pool of water. The “silence” comes from the metaphysical dimension, almost abstract of these volumes of six levels, the project imposed order and formal coherence through the rhythm of its large square openings, protecting the calm and quiet of the private lives people.

The community buildings are characterized instead by a formal dimension free and entertaining, which introduces a note of surprise and the whole game. The “lightness”, achieved by the materials, colors and the free form of the plant and openings create the emotional component, “musical” project that predispose the user to the discovery space and social interaction.

According to Japanese standards, the main structural elements should not be outside the halls. Most homes are built according to this rule, all with the same cantilevered galleries and corridors. Holl, however, proposed to maintain the original design for the facades, considering that an external homogeneity of such impoverished the urban landscape.

The structural parts and facades also comply with the principles set in the regulation of urban development. The supporting structure of concrete has solid walls in which openings are rhythmically repeated (with variations on windows and cover) interacting with lightweight structures. The structural system and openings provide a unique sensation that can be performed only at the level of the city. So with the economy of a large residential building has been possible to obtain a great individuality.

The common use areas are integrated into the work. The two gardens are open to all members of the resident community. The space has been placed at two different levels above the area for parking. The rooms active dialogue with the community space. Destinations were included functional environments such as meeting rooms, which, placed in the public garden, acquire a very special character. The space created by the interaction between light active structures, heavy volumes quiet and semi-private gardens proposed in the intentions of the designer, as an “inner journey”, in which the variety of perspectives and the radiant glow of colors, aim to create the user, a continuous and fascinating discovery. Internal courtyards and gardens are unique in their access through doors and openings, which play a symbolic role.

The silent buildings shape the urban space and allow access to the apartments across the green interior.

The real “active” elements of the building under review are the reflections of light and colors; they express, in the midst of daily habitat, the true dimension of life and dialogue with the surrounding space. The deep essence of this architecture can be collected only if the forms are interpreted as a dynamic element of construction, can be related to the play of light and convey a sense of lightness to the whole structure.

The supporting structure of all buildings in the set is materialized concrete base. 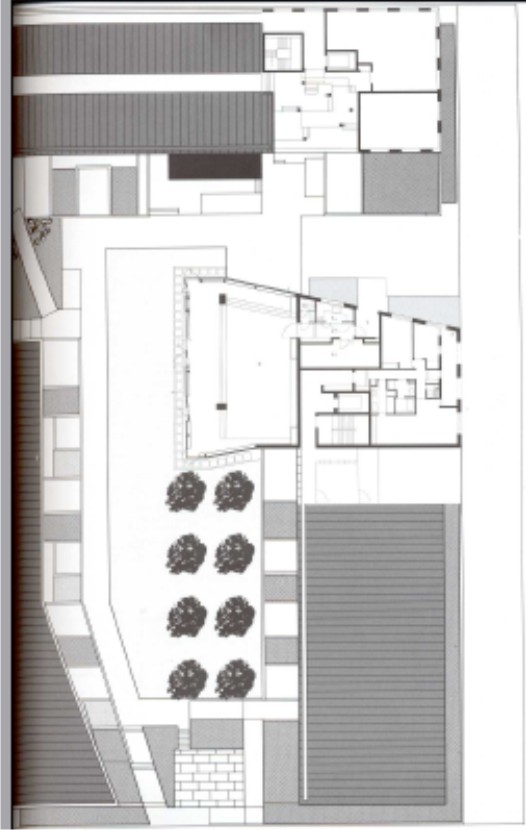 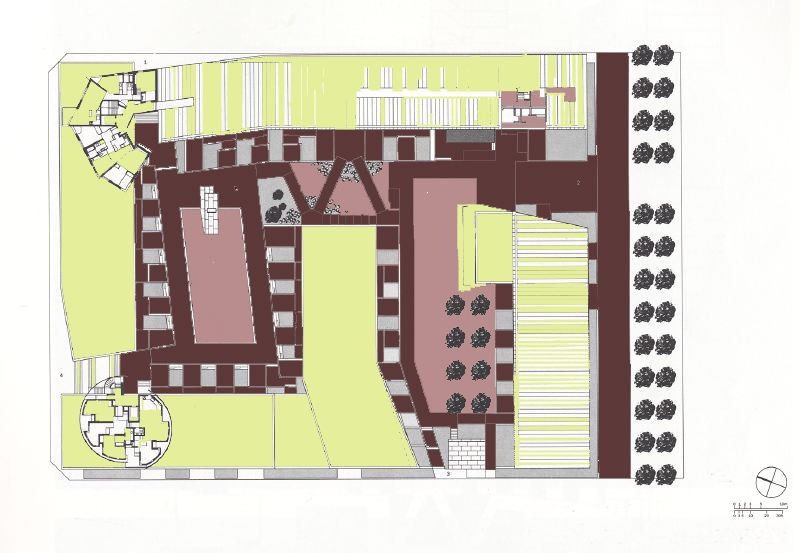 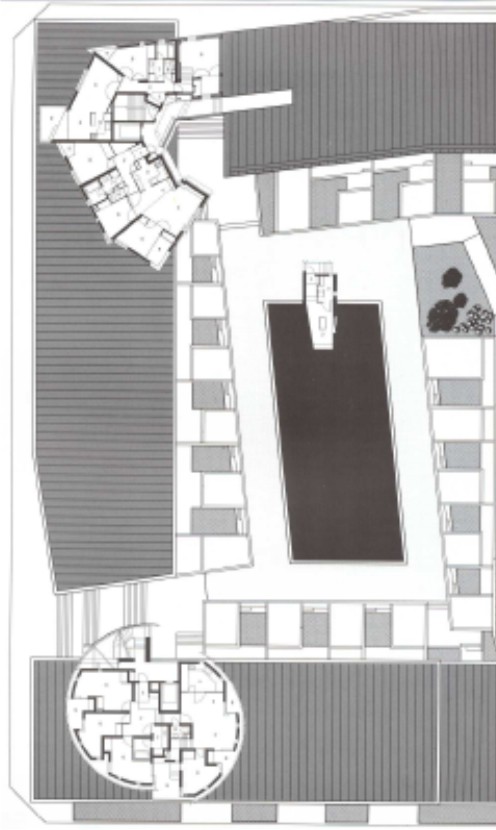 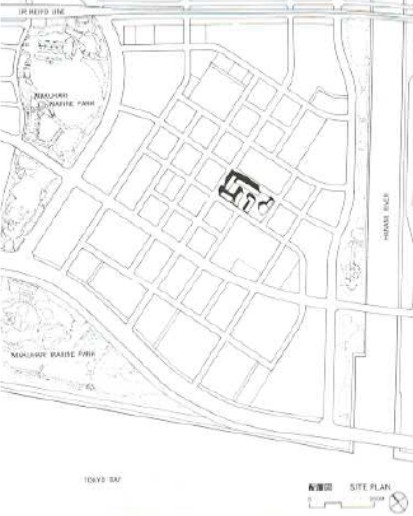 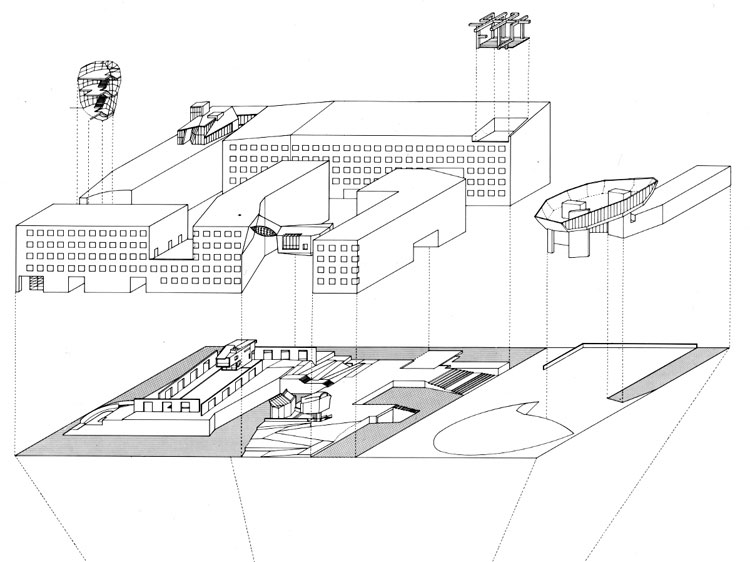 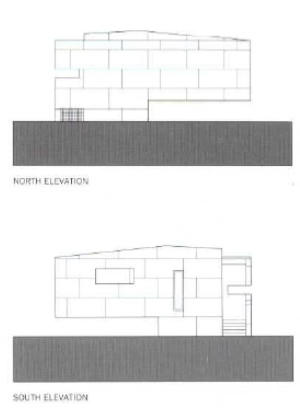 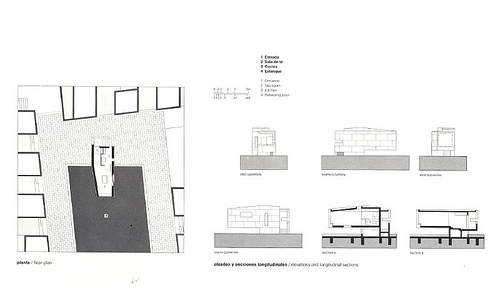 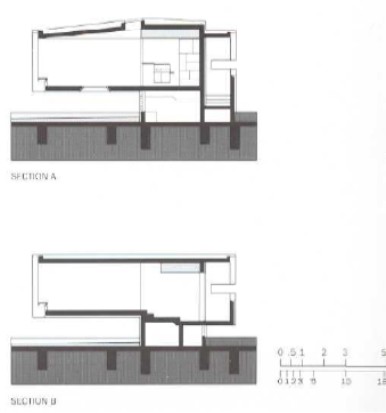 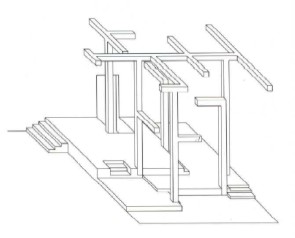 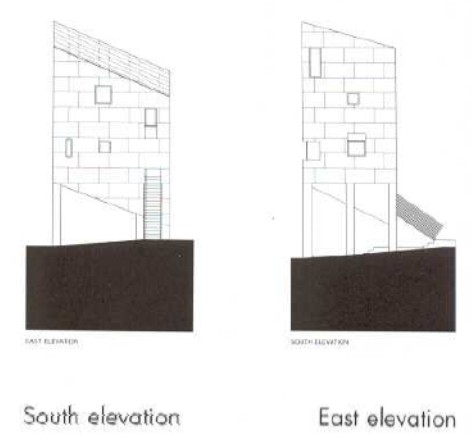 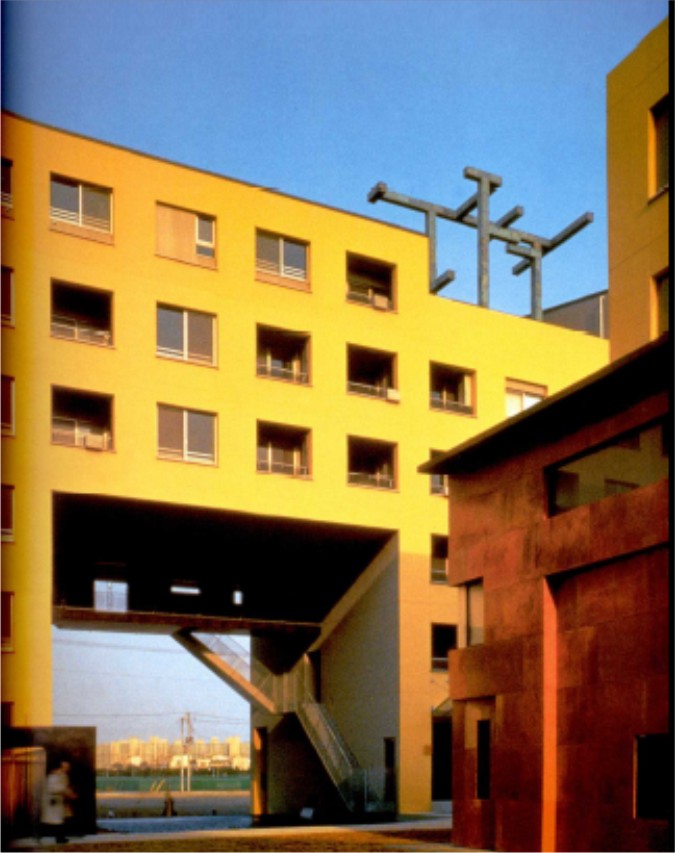 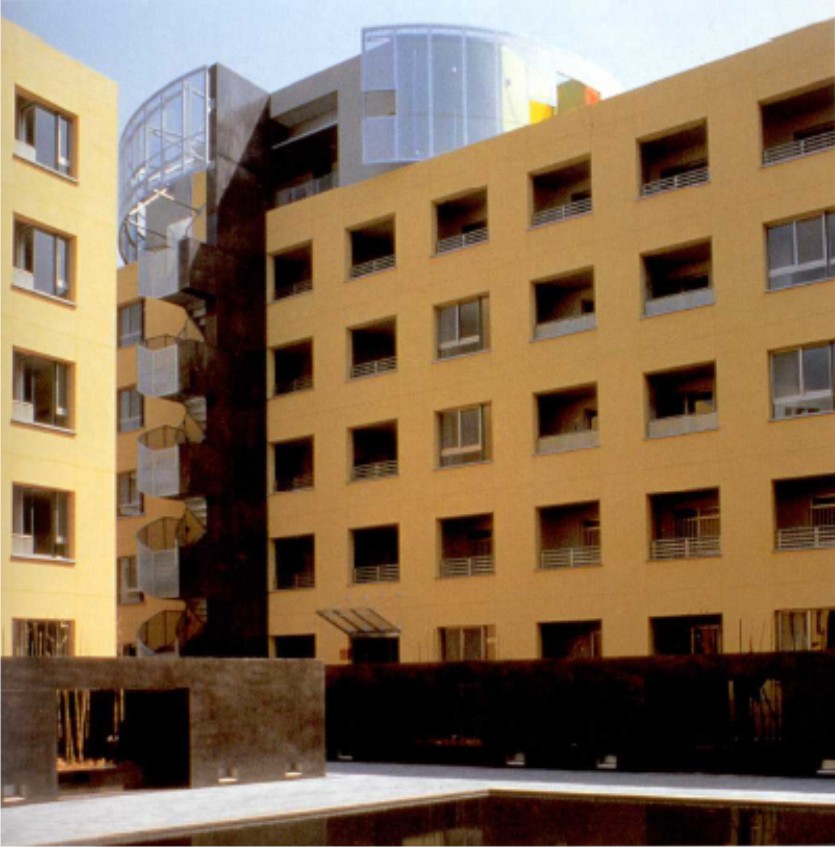 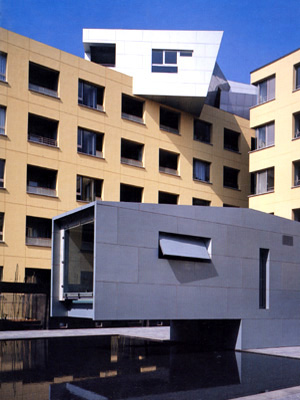 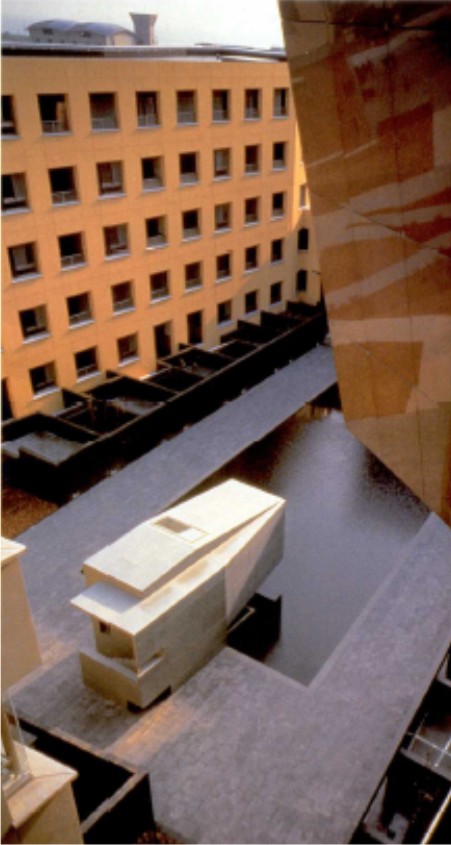 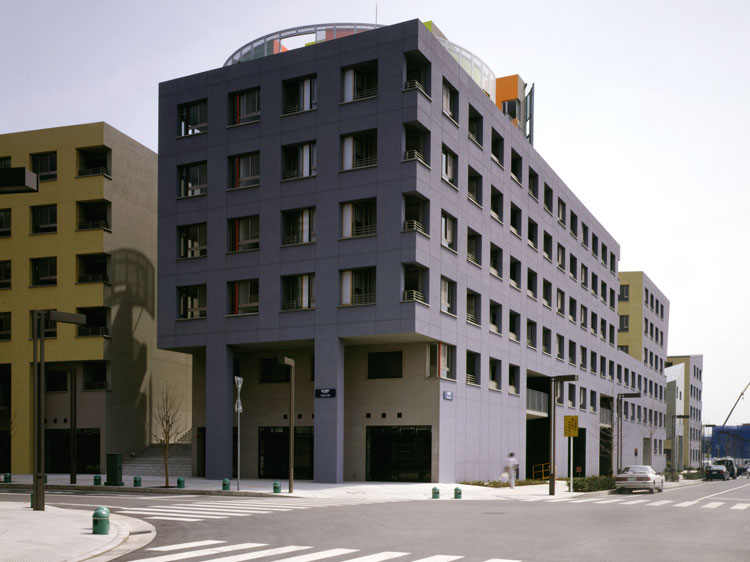 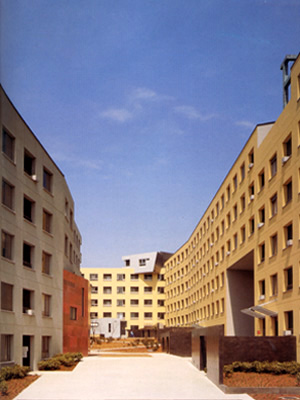 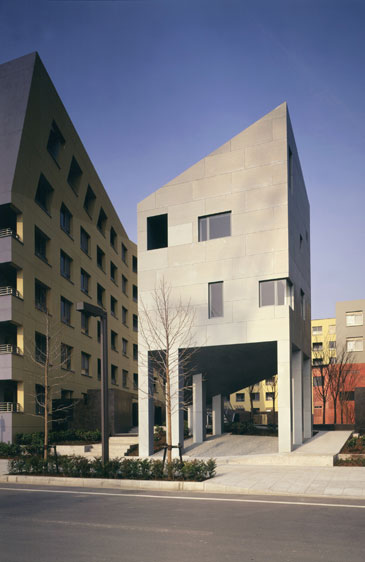 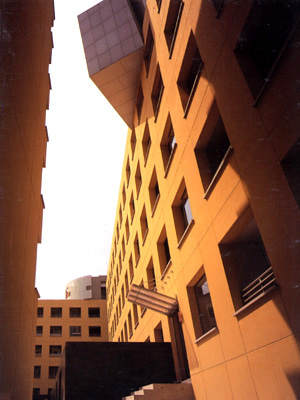 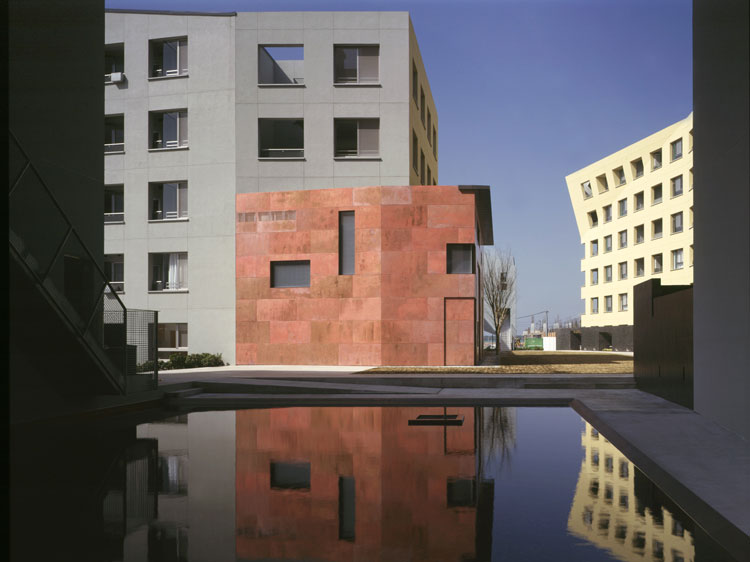 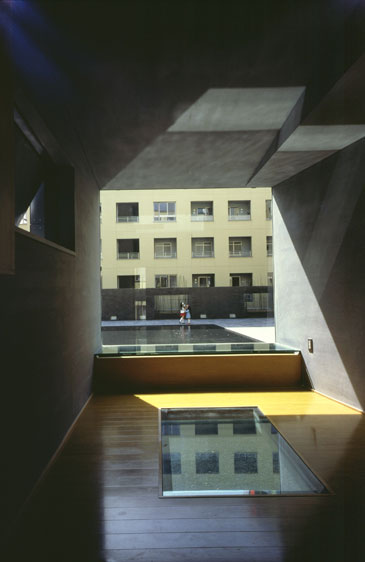 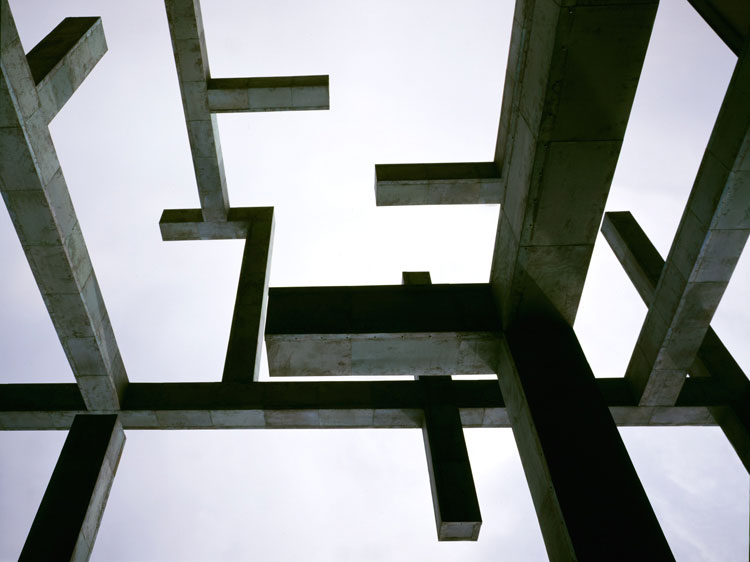 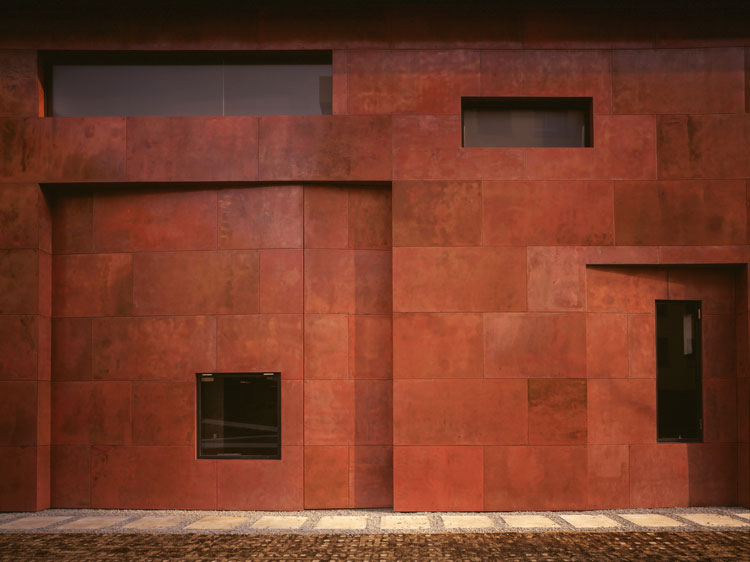 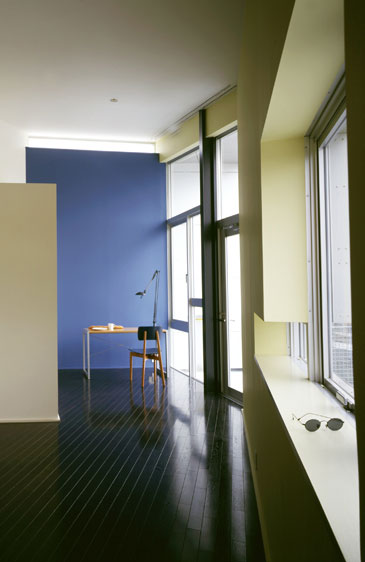 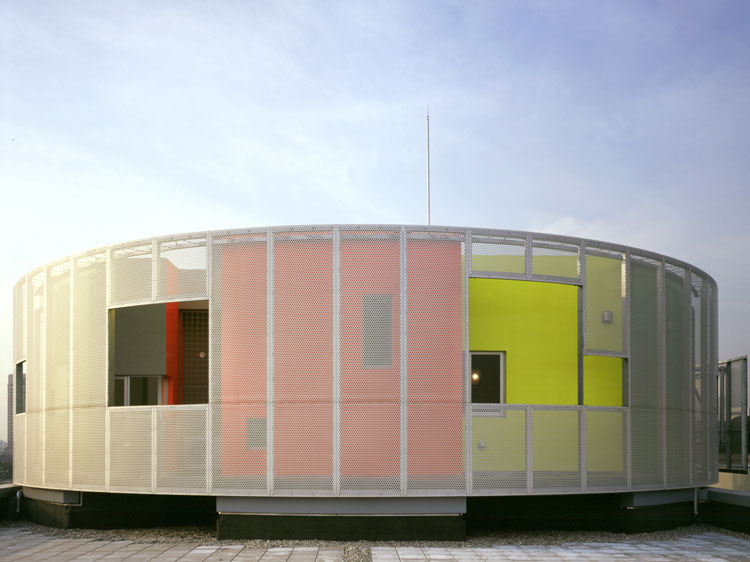