The Republic Polytechnic, the last campus created in Singapore is presented as a milestone in the natural landscape thanks to their white, modern lines that stand out against the background of the area of Woodlands is located. Since its inception it was intended as a campus in the park, so its volume is intended to create a counterpoint and contrast the terraced area between two hills set your location. The different buildings are completed each other creating a single set.

“Innovation should not be limited to technology or the environment, but should constantly challenge our vision of space.” – Fumihiko Maki

The Republic Polytechnic campus, or PR for short, aims to innovate not only in its architecture but also in their approach to teaching. Moving away from standard learning, the center calls for a holistic development of the students in interaction and research play a key role, two of the foundations of the system of teaching Problem-based learning (PBL). This view is shown in the approach to the complex, where public spaces and exchange between different disciplines are of great importance.

The center was inaugurated in the presence of Prime Minister of Singapore Lee Hsien Loong on 31 July 2007. In 2015 the RP now has six schools and two academic centers offering 41 courses that prepare students for the working world through their practice teaching based on critical thinking and communication skills and solving real problems (PBL). The hosting centers are:

The project is located in the north of the island of Singapore in a suburban town called Woodlands, near the coast and adjacent to two parks, the Admiralty Park and Woodlands Waterfront Park. The area is well connected by roads but isolated in some way by their environment. It is also the point of connection with the city of Singapore Johor Bahru, southern Malaysia, through the Johor-Singapore Causeway.

This campus aims to create a space between architecture and urbanism, in relation to its surroundings. The project maintains the green areas and the existing topography adding new elements of landscape in contrast to the wild character of the site. These elements accentuate the sense of place and connecting the various buildings on the campus as a whole.

The Master Plan of the Republic Polytechnic raises the set based on a core where the main focus learning spaces. The center eleven identical buildings classrooms and an administration building are located.

The set is unified by two elliptical spaces called the “Agora” and “grass”, which are placed around the classroom buildings. These ellipses contain the communal facilities on campus. Generous open space linking these formal and compartmentalised areas creating places for informal interaction between students and teachers. This great center of the project is joined by bridges to the main administration building, the cultural center, underground parking and sports facilities.

“The Agora is our creation, which stands between the institutions of global education as a unique educational environment where a myriad of information is exchanged between students and teachers.” – Fumihiko Maki

The Republic Polytechnic is not just a building but a group, somewhere between architecture and urbanism. The project could be seen as an example of “collective”, a term that architect Fumihiko Maki had developed in his 1964 book Investigations in Collective Form.

In this paper, Maki rethinks architecture as an individual and think in many ways there are to add, organize and distribute a group of buildings. Maki this arises as a result of rapid urban growth US and Japan after the Second World War. These developments, along with new highways, fast air travel and new communication technologies leave large footprints on the floor. Add to that the impact of the new engineering is able to create the topographic significantly alter the environment in a way hitherto unseen adds.

The scale, speed and scope of these changes exceeded for Maki old values ​​of architecture, so a new approach sees necessary. To do this, Maki away from the idea of architecture and raises the “collective”, a term that reflects, not a collection of separate and unrelated buildings, but buildings have a reason to get along together.

The draft RP is thought not only for students and teachers but also for visitors and locals, because the Republic Polytechnic wants to be an open space in which the community is related.

The campus covers an area of ​​20 hectares and can accommodate 13,000 students. The main elements that define the project are two elliptical shapes called the “Agora” and “grass.” Among these eleven “containers learning” classroom buildings and an administration building and personnel they are located. These buildings are the same height, nine stories, and its small size relative to the whole.

In elliptical areas are public facilities, library, auditorium, cafeterias and open courtyards. The relationship of these components creates a rich variety of space, wide hallways and generous conditions, terraced, covered timber gardens, bustling inner streets, distributors, accompanied by ponds and paths for contemplation. The qualities of these spaces are not the result only of the urban layout of the buildings, also are the result of architectural design. The sunken courtyards capture the tropical light, sometimes forming strong shadows, sometimes creating a special atmosphere. The floors are covered with wooden slats that sounds under the steps of the people. The glass enclosure of the buildings is specially designed to create a strange, floating and fragile effect. There are also several observation points in the complex where glass screens create a visual effect that appears to thicken space, as influenced by the tropical air.

The grass on the third floor acts as the main element of organization and orientation for students, staff and visitors. The series of sunken formal and informal patios, lawns and green squares, placed around the main traffic routes, visual and spatial bring relief to campus.

To use flexibility to buildings, learning the eleven containers were designed based on a modular system, allowing different combinations and exchanges of laboratories, offices and study rooms. The height of 4.5 meters between floor and ceiling also enhances the idea of ​​flexibility and adaptability.

Around the outer ring are five secondary satellites including the sports complex and the Cultural Center, a landmark in the area. These are attached to the core of the project through bridges. The entire assembly is adapted for the disabled. The project received the President’s Design Award, as Project of the Year, awarded by the Design Singapore and the Urban Redevelopment Authority in 2009.

To reach the final configuration is conducted many discussions about the different design options. Fumihiko Maki and his group evaluated each alternative thinking end users of space, mainly students and teachers. This process led to the inclusion of the Agora in the project and its development.

The Agora is the most recognizable and innovative point of Polytecnic Republic and the most important place of the project according to the architect. Pick up the idea of ​​the agora of ancient Greece where products and ideas were exchanged freely. This space is a democratic, public and experimental place for the relationship between students and teachers. The Agora is a large, continuous, tiered space and encourages the exchange between disciplines, unifying learning spaces separate buildings.

Next to the lawn, the Agora is one of the main points of the design of the campus and physically expresses the learning space beyond conventional classrooms. The grass also effectively replaces the green space occupied by the footprint of the campus buildings, camouflaging the impact of this on the environment. Maki had a lot of satisfaction to “watch people on campus, truly enjoying and appreciating the project”.

The design of the campus also includes sustainability aspects. The orientation of the plan follows a north-south and east-west layout, allowing the school to benefit from sunlight and thermal efficiency and shadow. Based on these axes buildings and parking lots are located.

They will also feature floor to ceiling windows to allow daylight between fully in classrooms, reducing the requirements for artificial light during the day. Resources to create shade are different in each facade and redirect light to the interior points of the buildings while preventing direct radiation from overheating and spaces. In the environment, ponds and lawns also help create a green environment that invites you into it.

During construction paints with low percentage of volatile organic compounds and recycled building materials they were used whenever possible. For its use of innovative and sustainable solutions, the project won the Green Mark Platinum Award 2006 granted by the Building and Construction Authority.

Upon receiving the award, architect said “Given my fifty-year relationship with Singapore (my first visit was in 1959), this recognition is one of the most memorable moments of my career. ”

Buildings and platforms have elliptical structure of reinforced concrete and steel.

The fritted glass buildings include (a type of porous glass does not pass but if the solid particles and liquid gases, which can serve as a filter), floors made ​​of nylon and recycled tire and sun protection slats integrated in the facade design.

The RP is one of the first projects in the area to use a system of thermal energy storage. Multiple ventilation modes of sports facilities and the use of photovoltaic panels for generating light and electricity are other sustainable aspects of the project. Instead of the conventional air conditioning system campus is equipped with tanks containing cold water. These are recharged overnight leveraging hours when electricity is cheaper. Thanks to this idea significantly reduces power consumption on campus. The use of solar energy and a pneumatic waste transport system are two innovative points of the proposal, and pointers in the area of ​​Singapore.

In 2008 the ASEAN Republic Polytechnic won the award for best company for the most energy efficient in the category of existing buildings and new buildings building. In November 2009, the RP won the Green Office Label under the Eco-Office category, awarded by the Singapore Environment Council. The Green Office Label (2001-2011) also praised the campus as a place of ecological and sustainable work. Later, in 2010, it was awarded to the RP the President’s Design Award. Finally, this campus is the first project in history to have won the Singapore Green Mark Platinum award for its eco-efficient design. 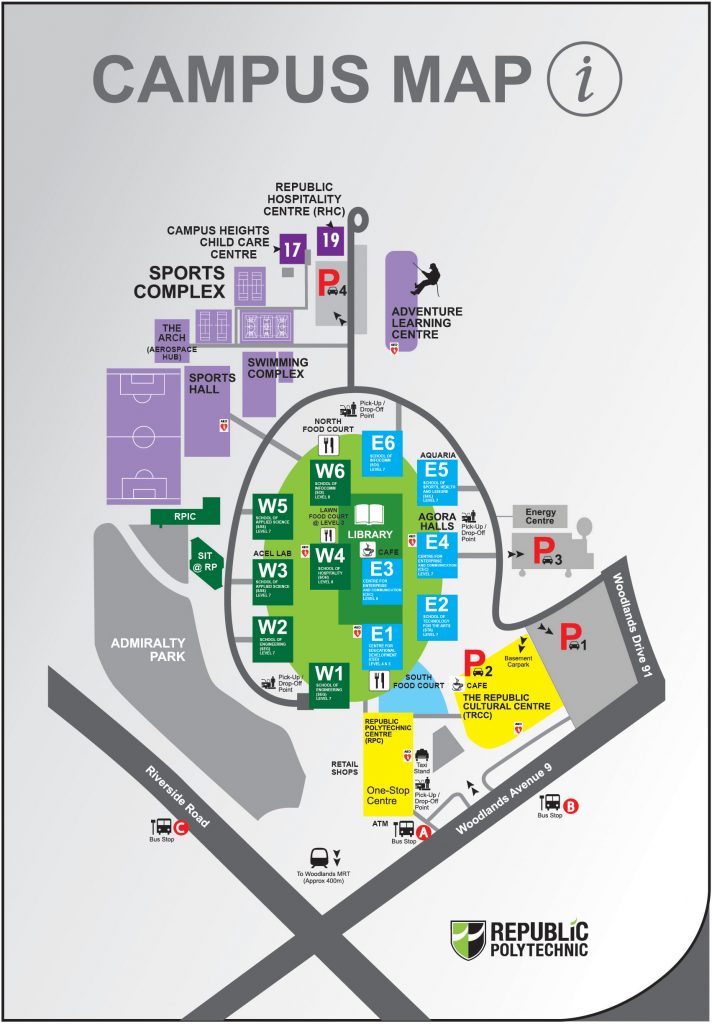 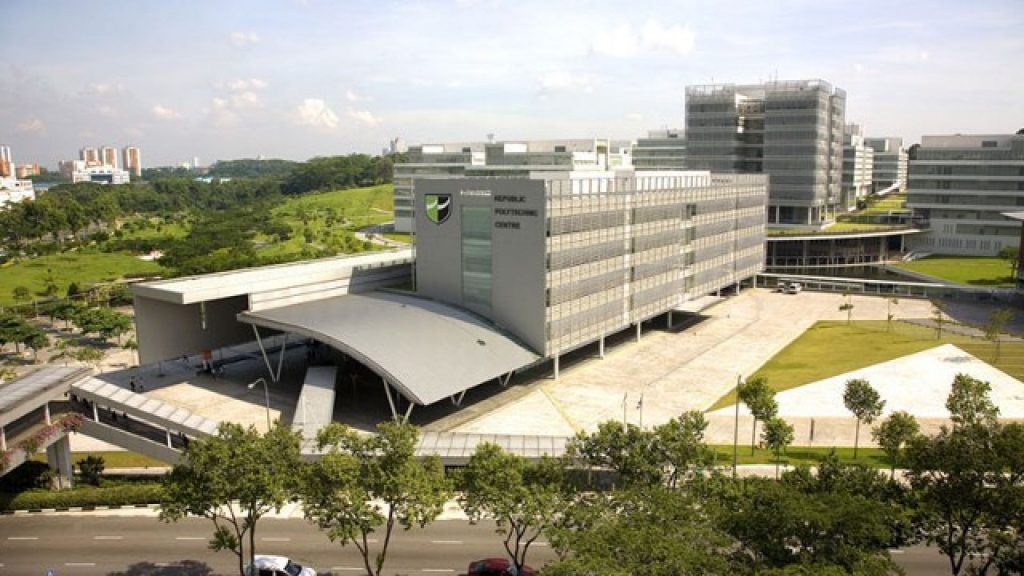 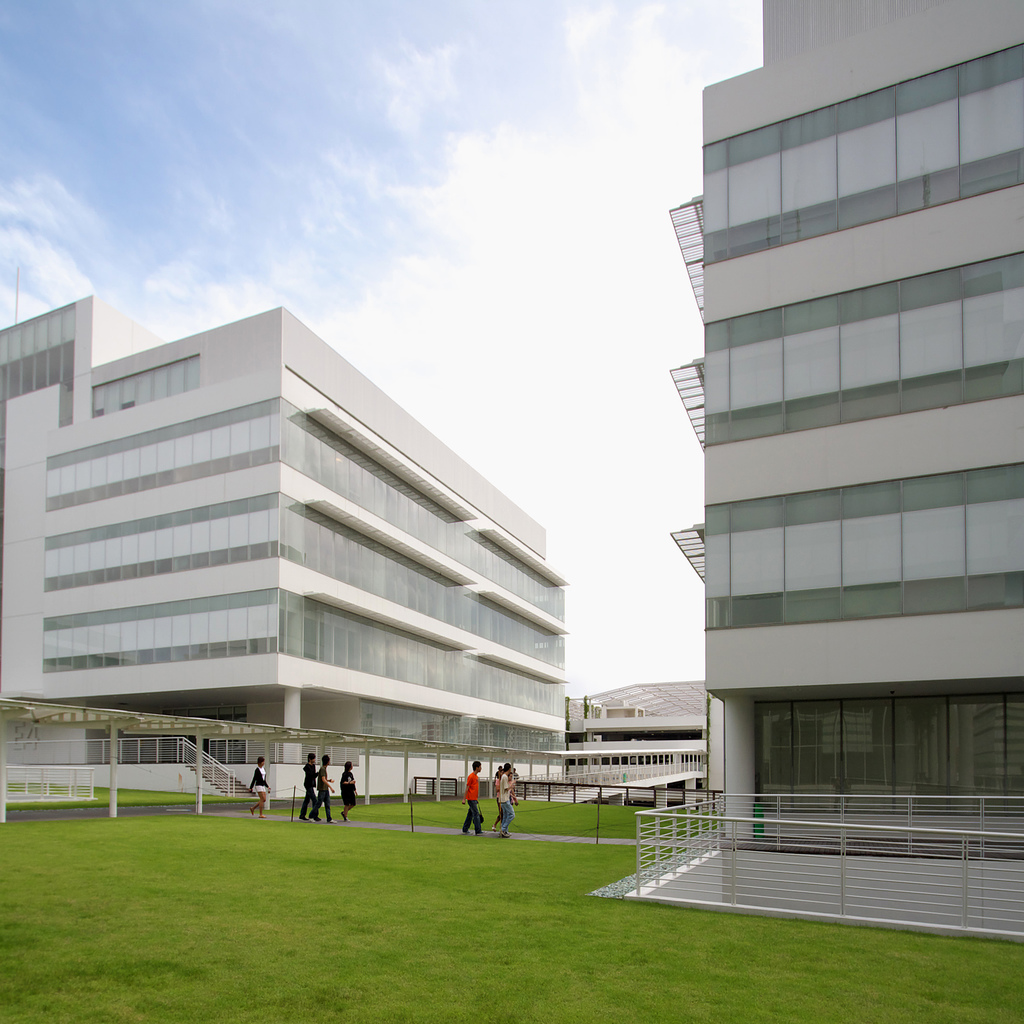 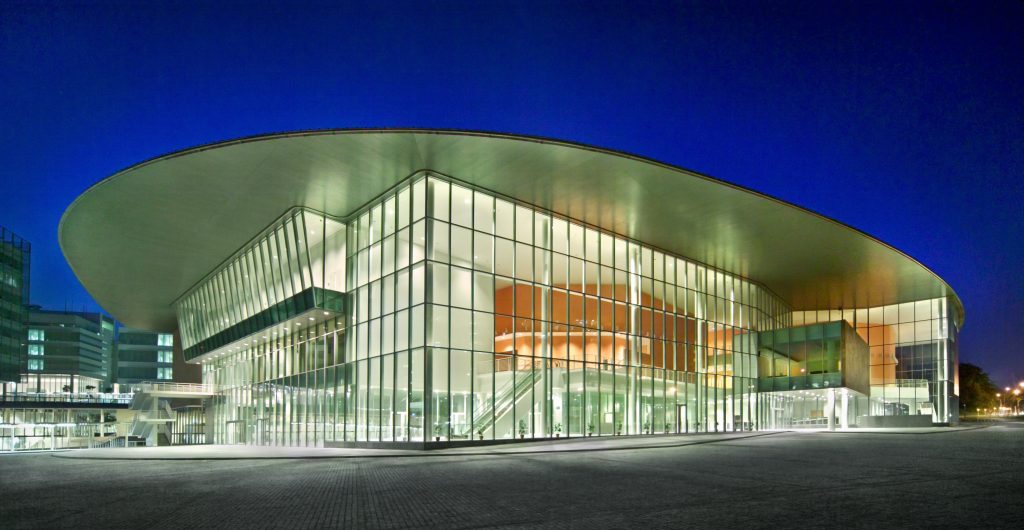 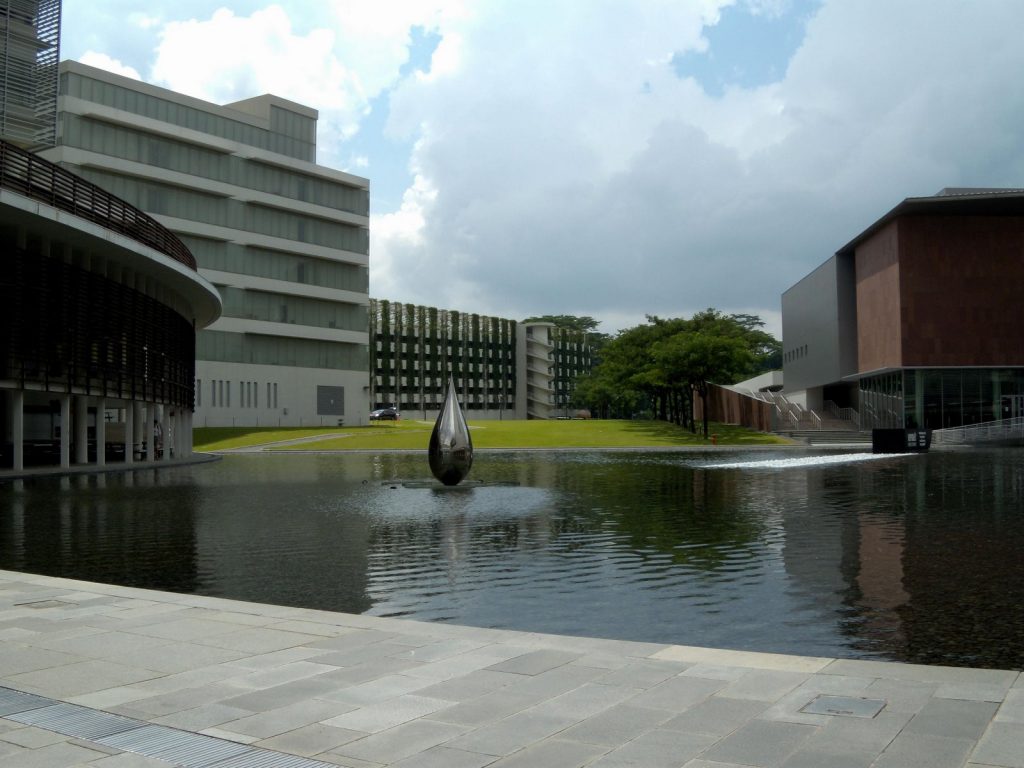 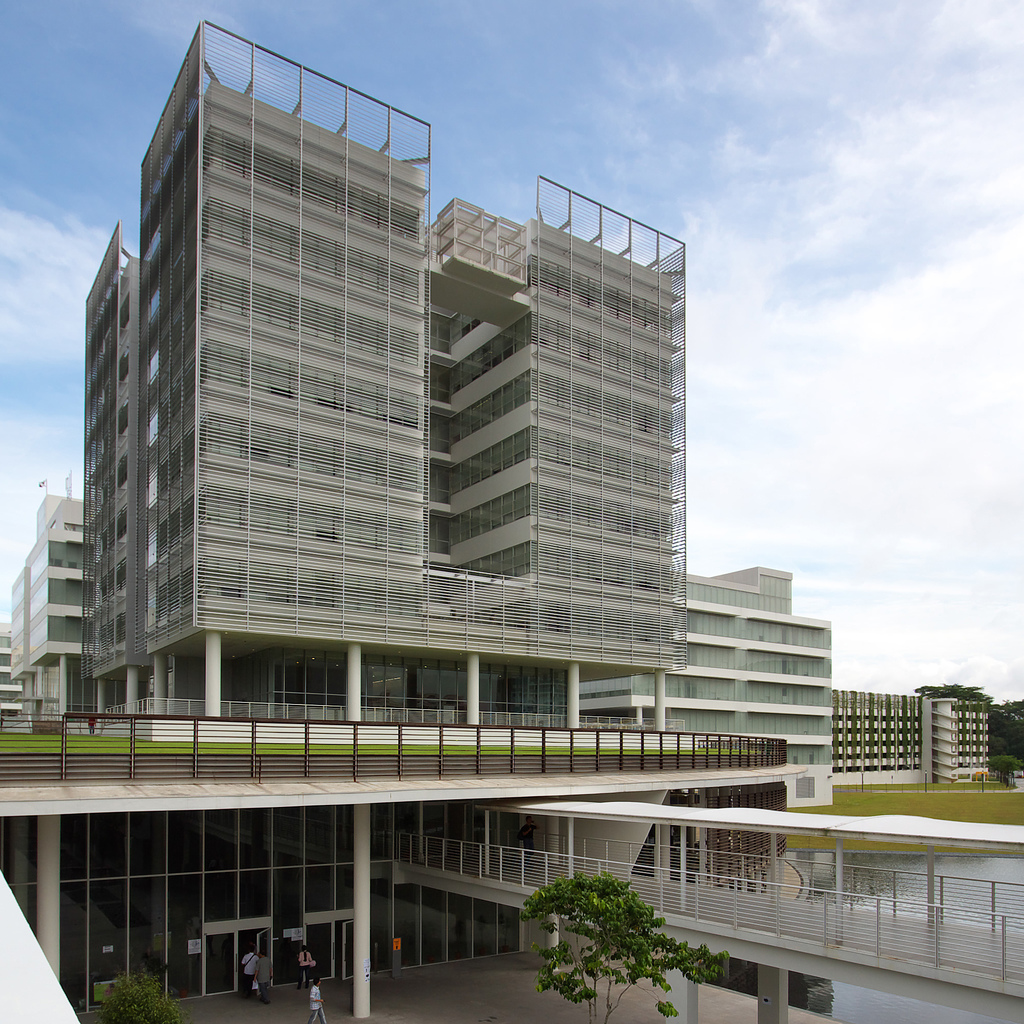 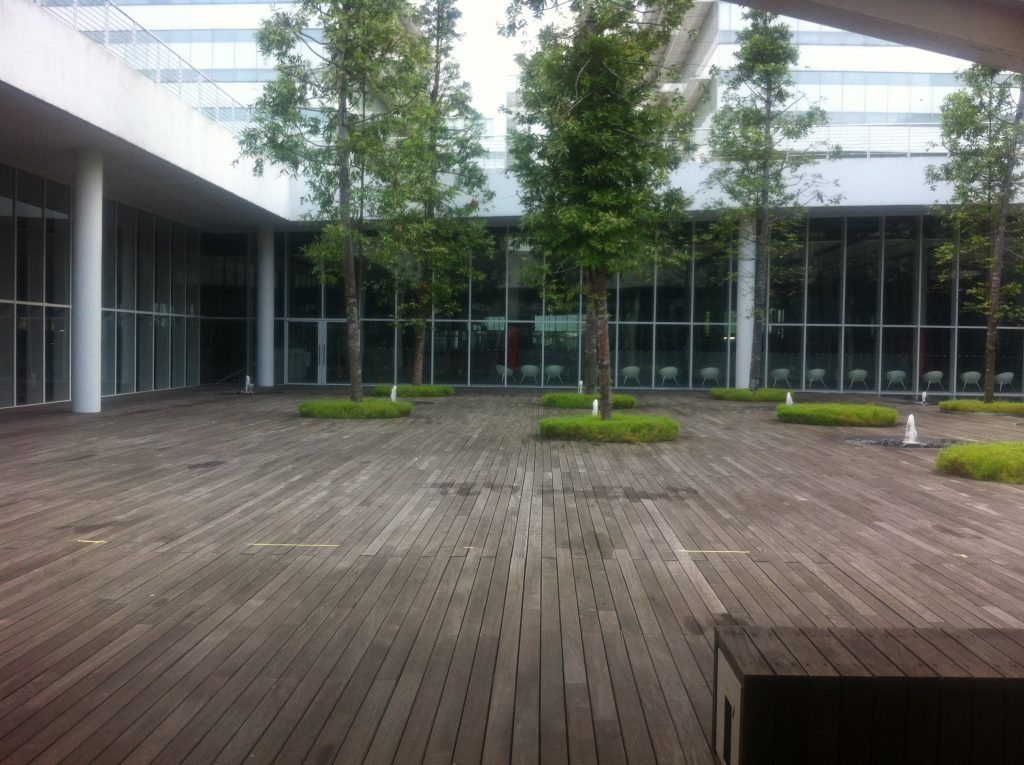 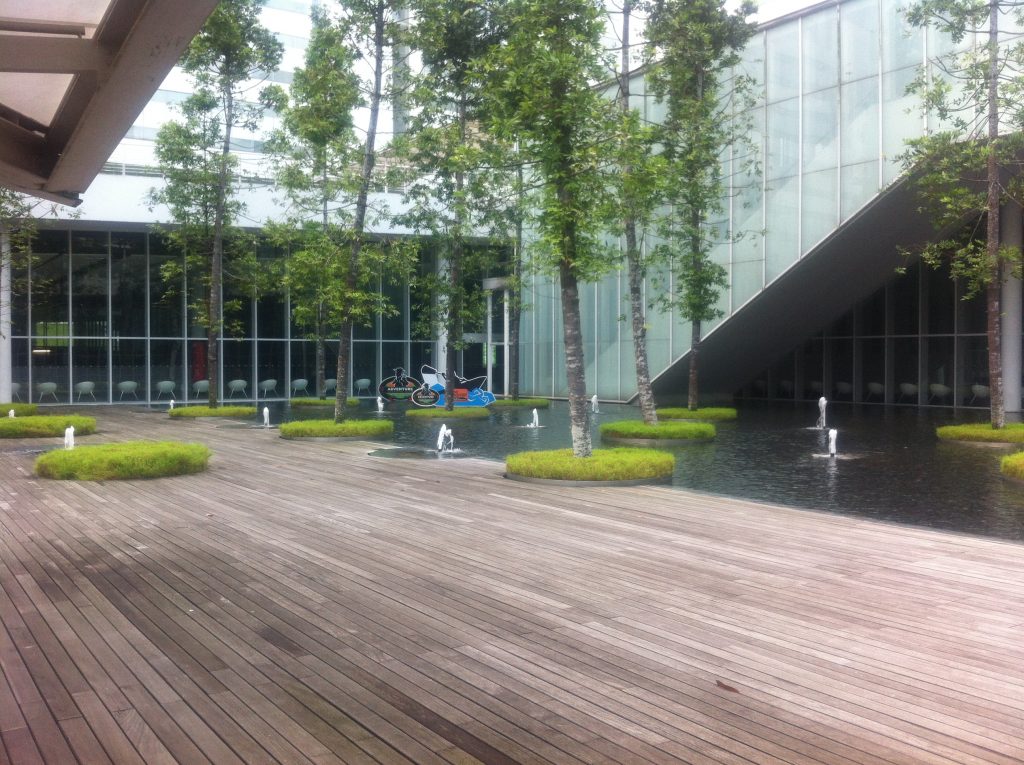 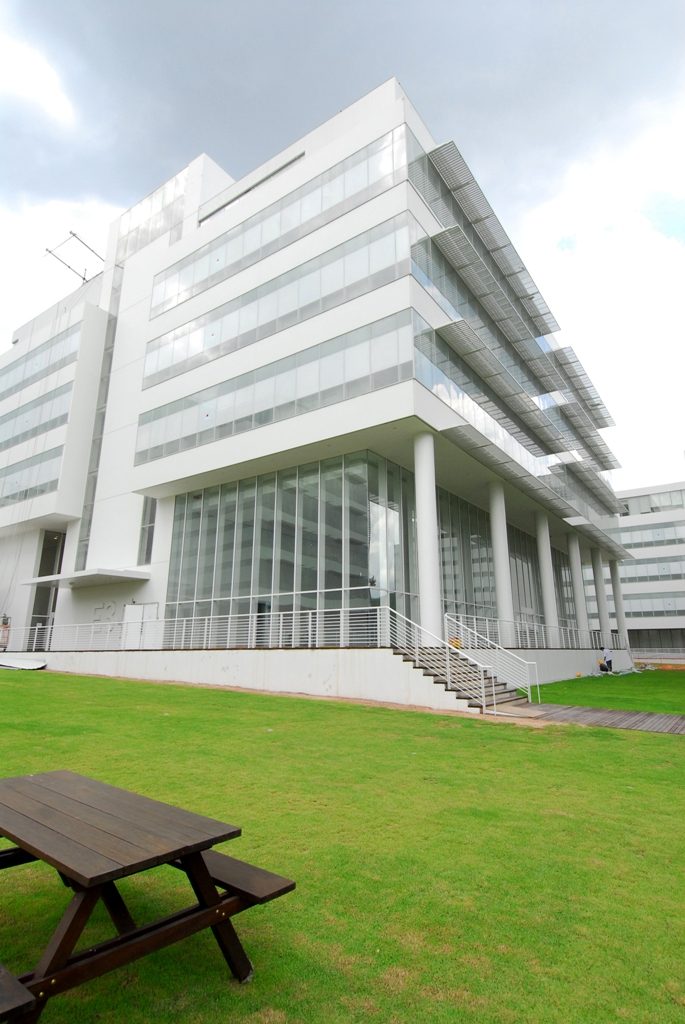 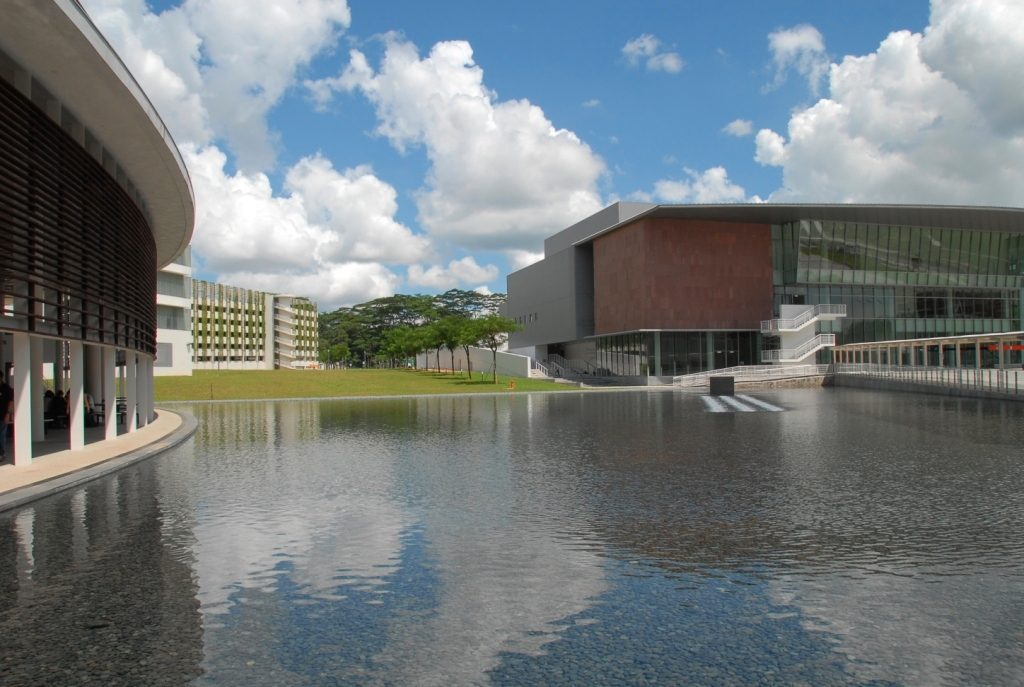 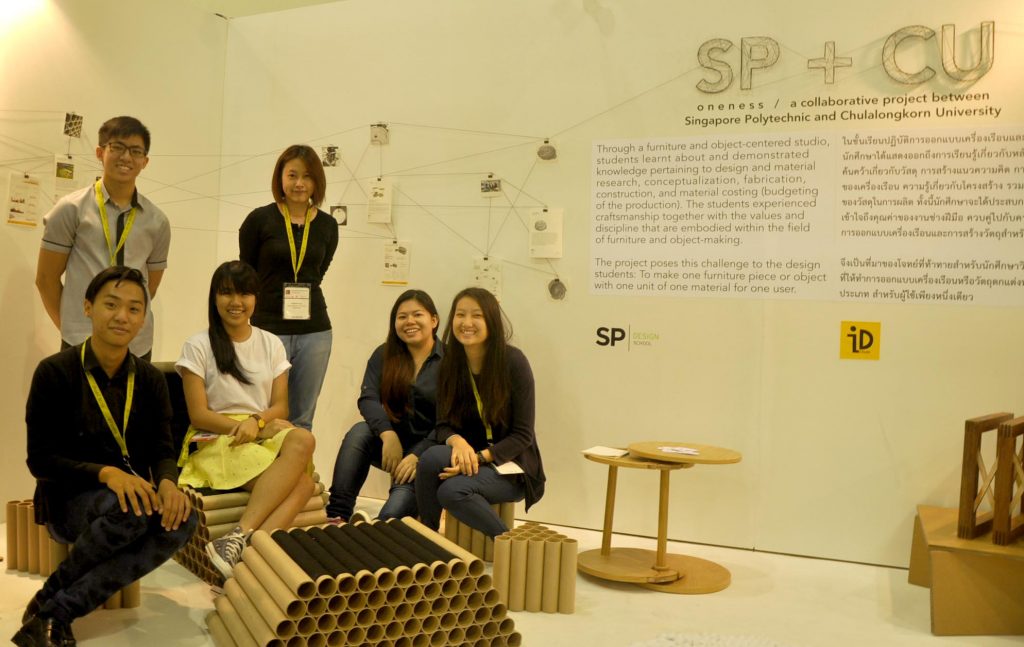 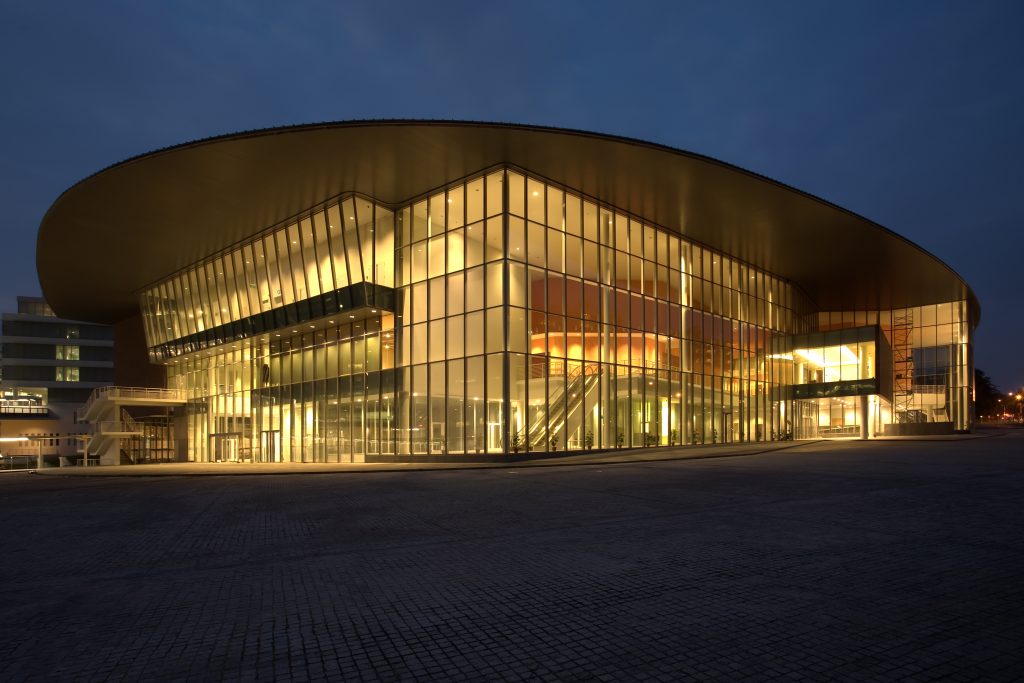 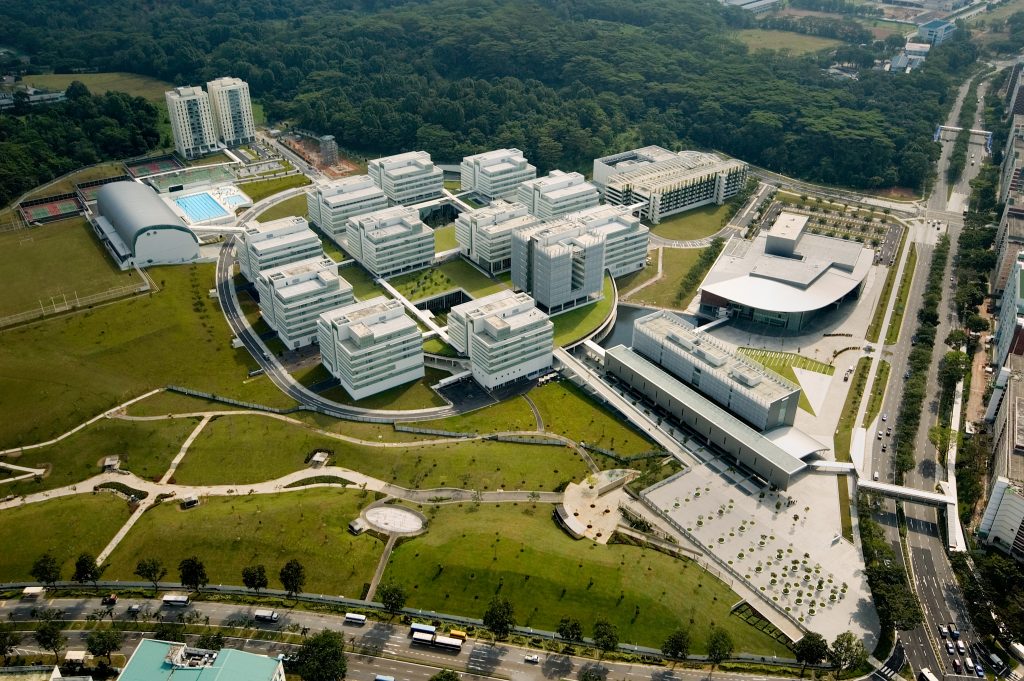 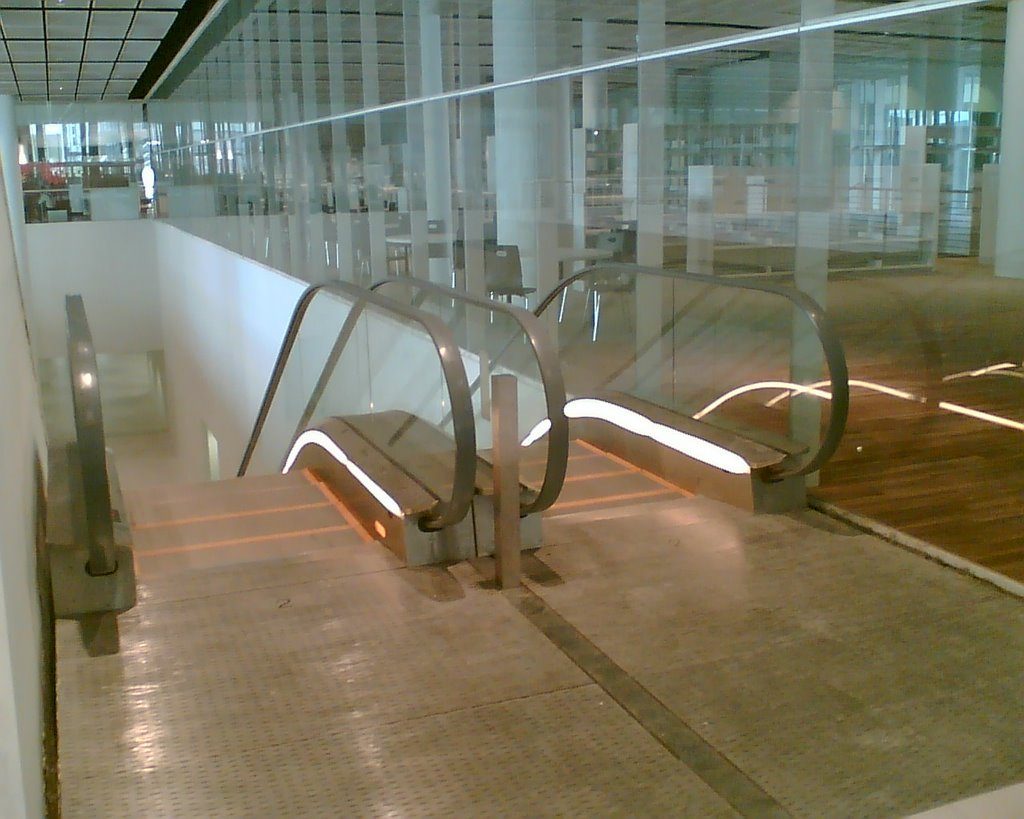 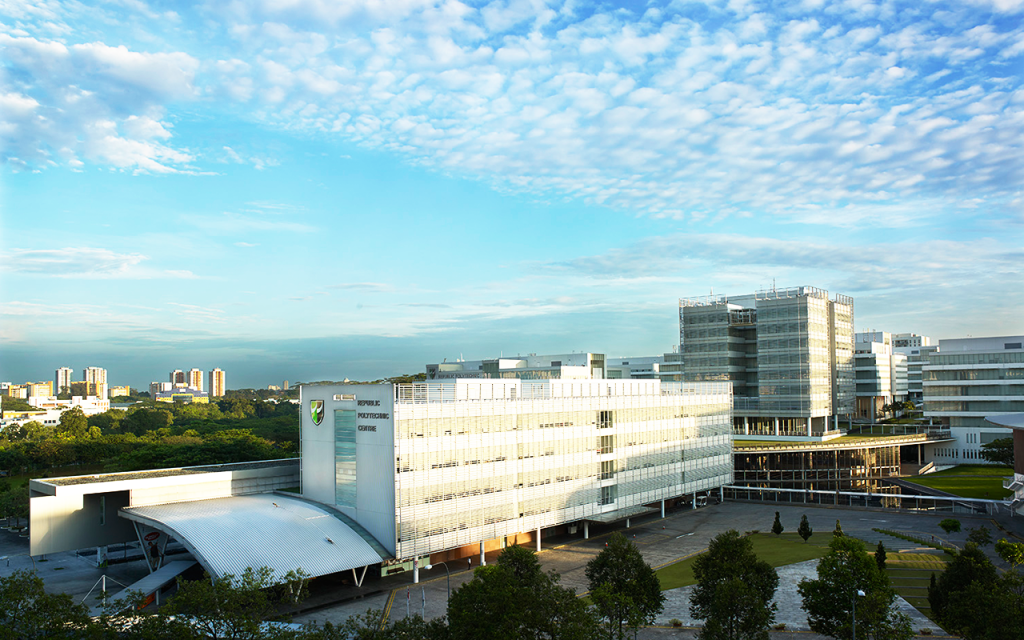 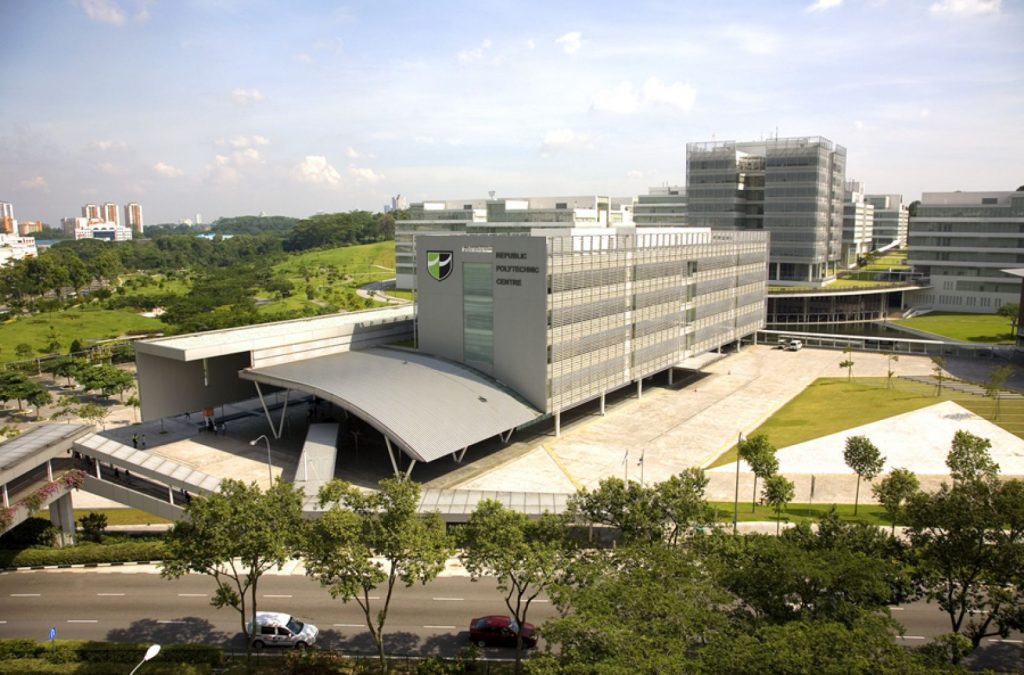 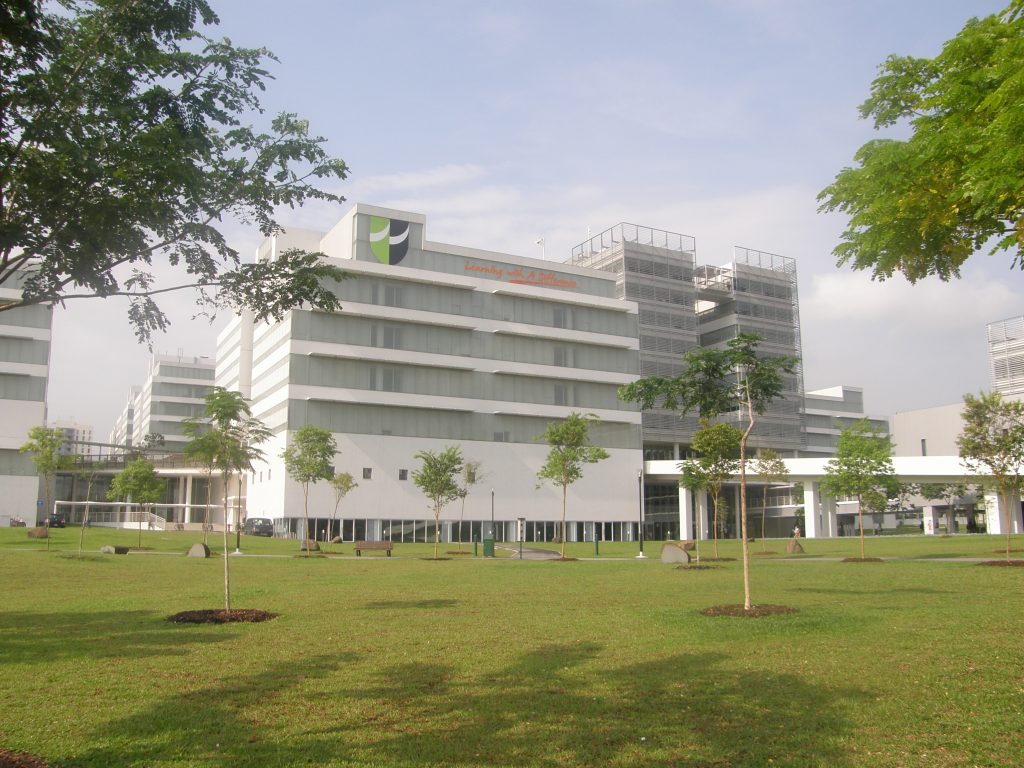 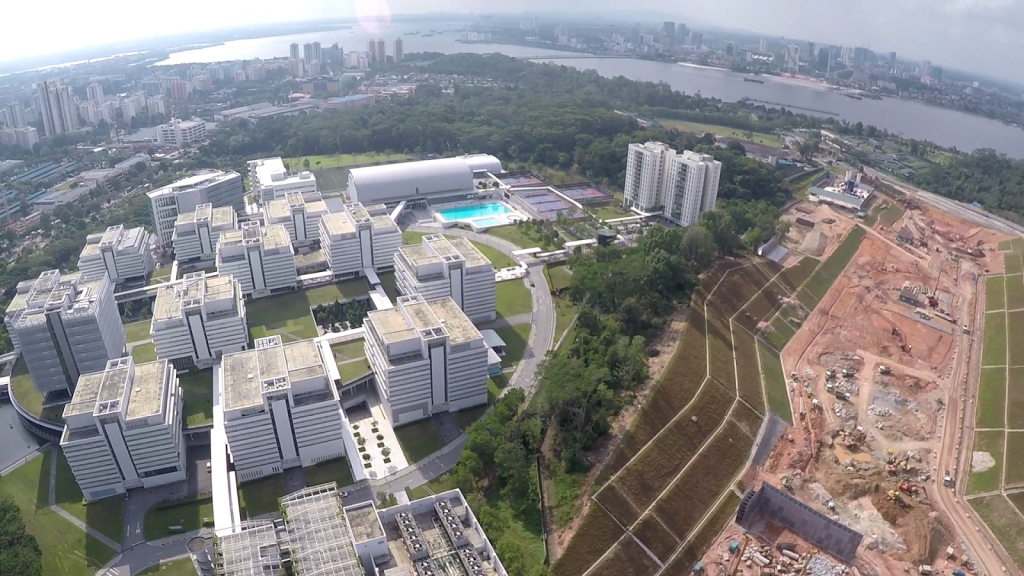 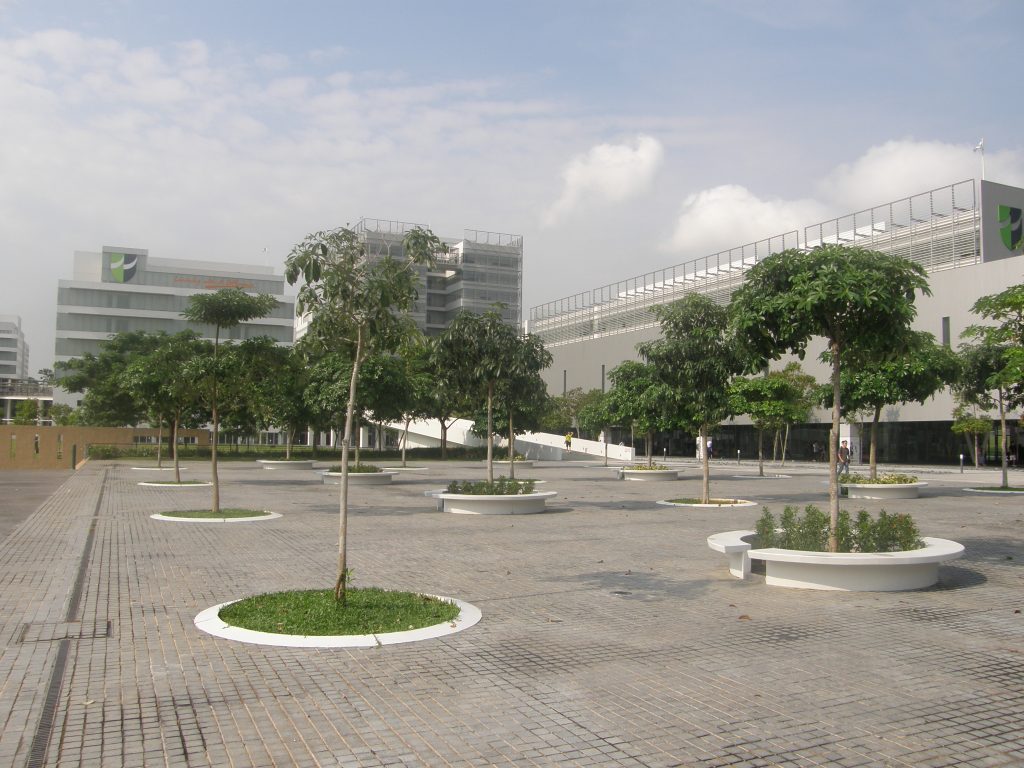 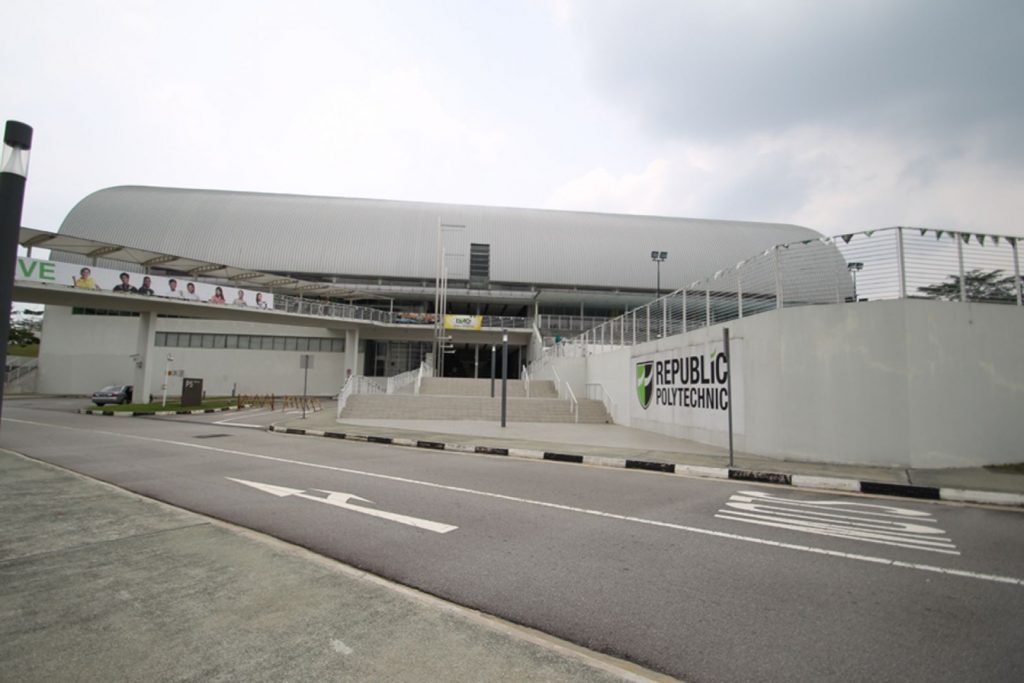 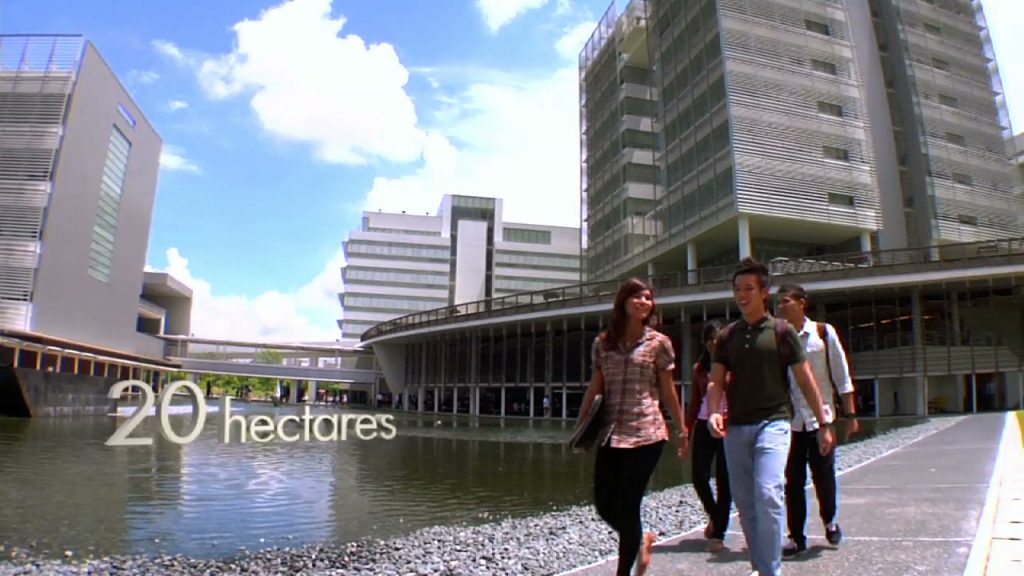