Remodelation and Expansion of the Thyssen Bornemisza Museum

The Thyssen-Bornemisza collection has long needed more space for exhibitions and also urged the growth and improvement of museum services, such as the bar-restaurant in the first phase projected in 1992 by Rafael Moneo, was minuscule. The proposal won the competition for the expansion of the museum, organized in 2000, was for the architects of the Catalan team BOPBAA, Josep Bohigas, Iñaki Baquero and Francesc Pla.

On June 8, 2004 inaugurated the extension of the Thyssen Bornemisza Museum in Madrid, which has been built using the outside of Goyeneche Palace and other buildings used by public institutions.

The original building, known as the Palacio de Villahermosa, by Silvestre Pérez and Antonio López Aguado (1789), had various uses and conversions until in 1970 it was acquired by Banca López Quesada and underwent remodeling of its interior (by Fernando Moreno Barbera). It was a palatial structure with a main door to the Carrera de San Jerónimo of great simplicity, since it faced the neighboring Palacio de Medinaceli (on the site occupied today by the Palace Hotel), home of more aristocratic grandeur. Its front garden adjacent to Paseo del Prado, is more richly decorated and crowned with a splendid façade.

The transformation of the Villahermosa Palace Museum was started in 1989 by Rafael Moneo, to respect the classical structure of the exterior of the building but completely change the interior, creating a succession of sober halls for the exhibition of the Collection Thyssen-Bornemisza.

The new renovation, open to the public in 2004 (the work of the study BOPBAA), intends to follow the guidelines set by the action of Moneo, respecting above all the functionality of the work: the exhibition of paintings. At the same time seeking increased exhibition space for new acquisitions to the collection.

The Thyssen Museum in Madrid is located, specifically in front of the fountain of Neptune, sharing place with the Ritz and Palace hotels. The building that houses it is the Palacio de Villahermosa, neoclassical style, on the Paseo Prado 8, 28014 Madrid.

The expansion project was aimed that the two buildings, the existing and new street Marqués de Cubas, was turned into a single space able to share activities and tours. The new Thyssen respects in this way the original construction of the rear facade with modern exterior of the new building.

The proposal launched in April 2004, is based on architectural ingenuity to implement common sense, ability to fit the new program dealing with the first phase of infrastructure and creating a new facade to the garden with a Mediterranean air, which is capable to express the structure of the chambers and thereafter with the existing buildings in a strip where the building blends with the garden.

The project, by necessity, is based on the logic of the addition of fragments in this case resolved in an efficient and mannerist allowing a smooth transition of the building, intervened by Rafael Moneo, to the new showrooms.

The main novelty is the creation of a new building, which adjoins the front yard of the museum. Under a large terrace, is inscribed in large letters the name of the museum.

Work began from the transposition of two historic buildings adjacent, which has enabled refurbishment of 8000 square meters, approximately 50% of the existing distributed among 18 new exhibition halls and various agencies improve the facilities of the museum.

With three floors, this museum is very educational for its size and its distribution based on descriptive criteria chronological, thematic and stylistic.

Thanks to this new space, the museum also has on its top floor with a terrace and veranda with magnificent views over the city of Madrid. A privileged space that welcomes in the summer months, a restaurant famous for the Museum Nights, coinciding with the extended opening hours until midnight in July and August.

Also, at one end of the hall is the shop-library, thanks to its greater space and a convenient location allows better exposure of the objects visible from the outside.

On the third floor of the Palacio de Villahermosa, is still the library, but gained many meters and can accommodate the historic Thyssen collection, Lugano until, happening to have more than 20,000 volumes.

The museum grew from 48 to 64 rooms and features a new gallery for temporary exhibitions. Have also been expanded to lecture halls and a new restoration shop.

Between the two museums and old buildings have been remodeled, there is a link that also becomes an exhibition hall.

The refurbishment of the gardens below suggests a series of major new services, dedicated to the transfer of materials for the presentations, the receipt of inclement weather.

Constructive proposal retains the intact facades of buildings Goyeneche “located at 19 Calle Marqués de Cubas, 21 and also its use, devoting the space between the facade and the first load-bearing walls to the internal services of the museum, and respecting heights range.

Maintaining a logical palace, insert the new pavilion in the garden and observe the ancient environment are key aspects in the approach of architects.

The new program for temporary exhibit, was reconciled with the conservation of the main corridor of the two old buildings in the street Marques de Cuba, which remain subject volumetry and configuration environment.

Overseas expansion step takes the form that generates the former cover the skylights, the shape of the chambers and the volume of semi-sunken bar-restaurant.

The materials on which they are remodeling stone, aluminum and glass.

Remodelation and Expansion of the Thyssen Bornemisza Museum 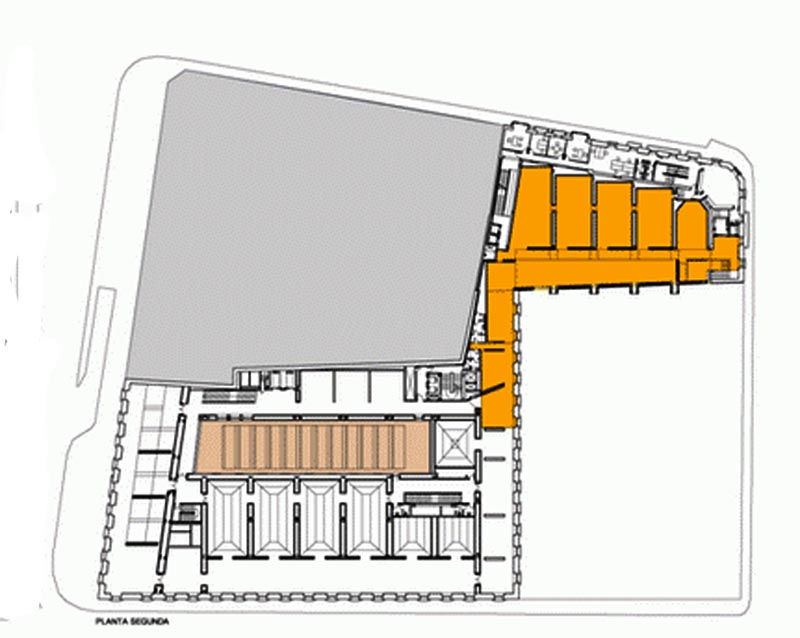 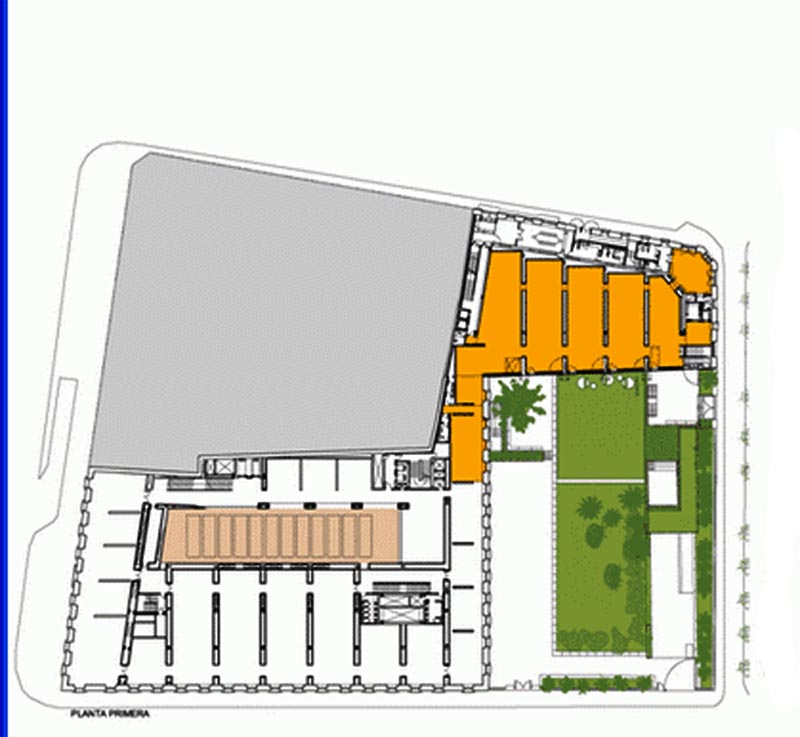 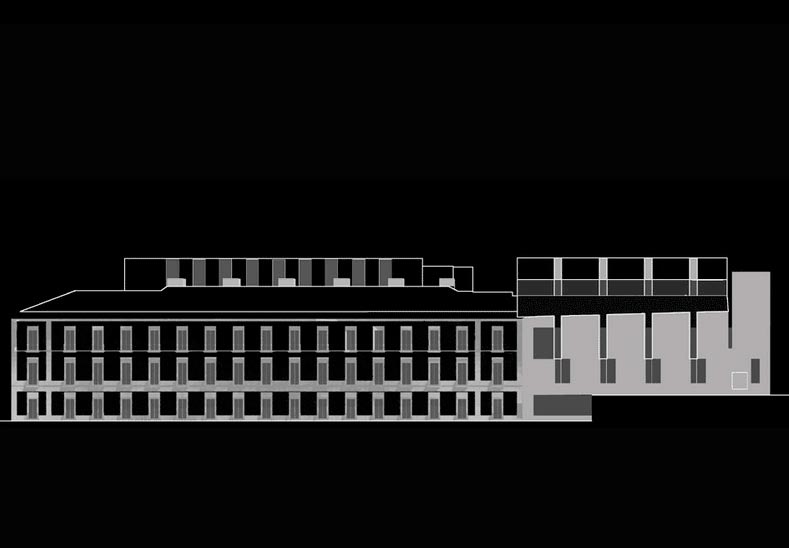 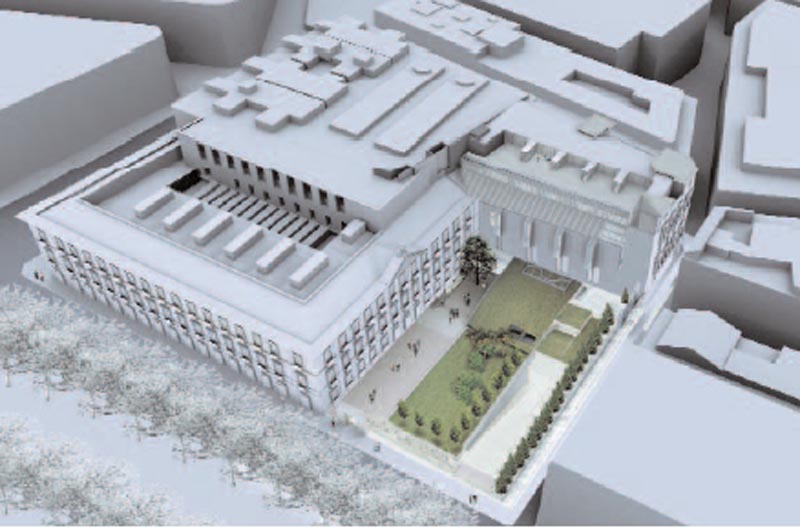 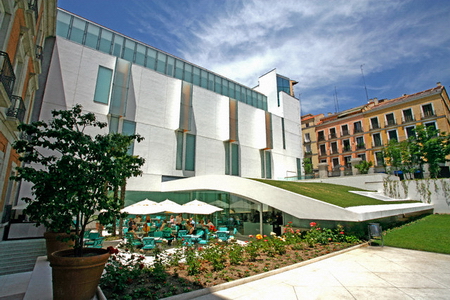 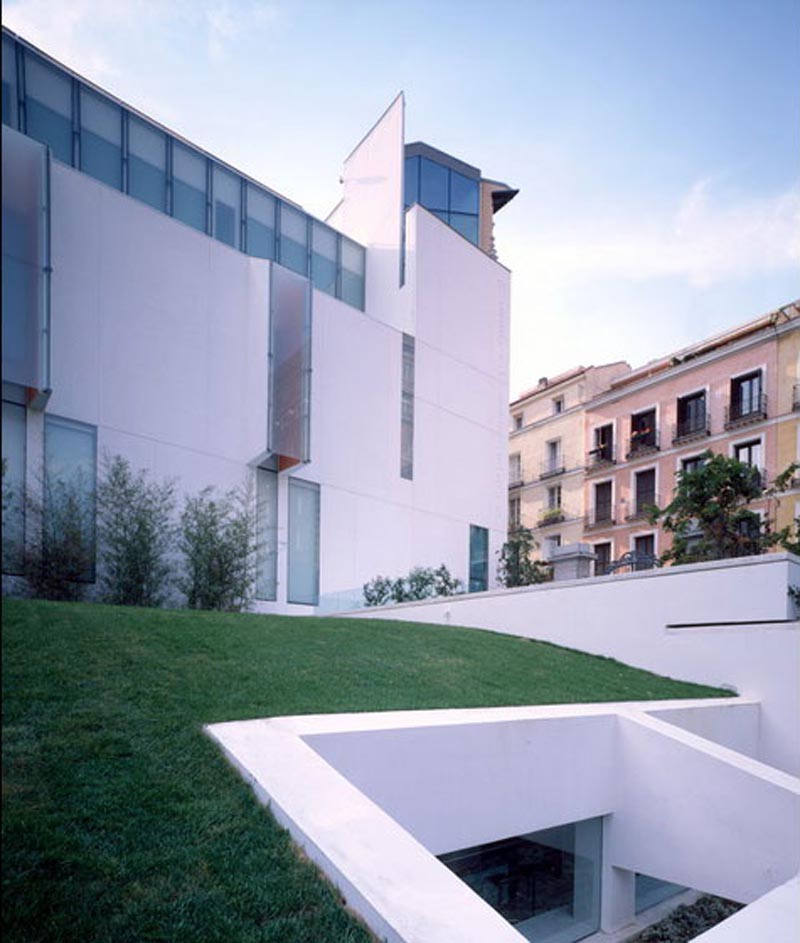 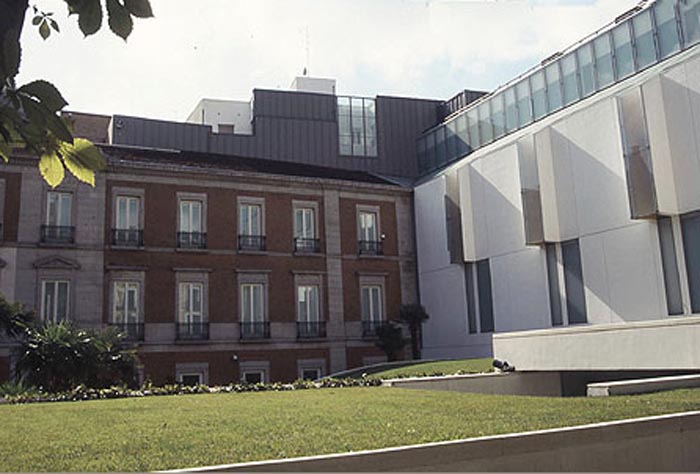 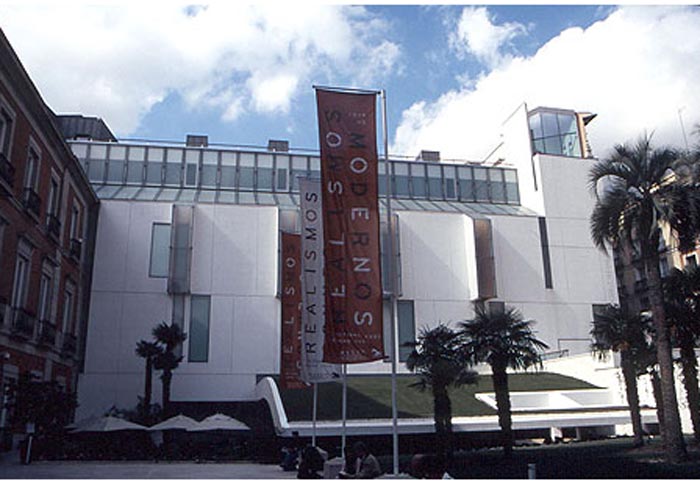 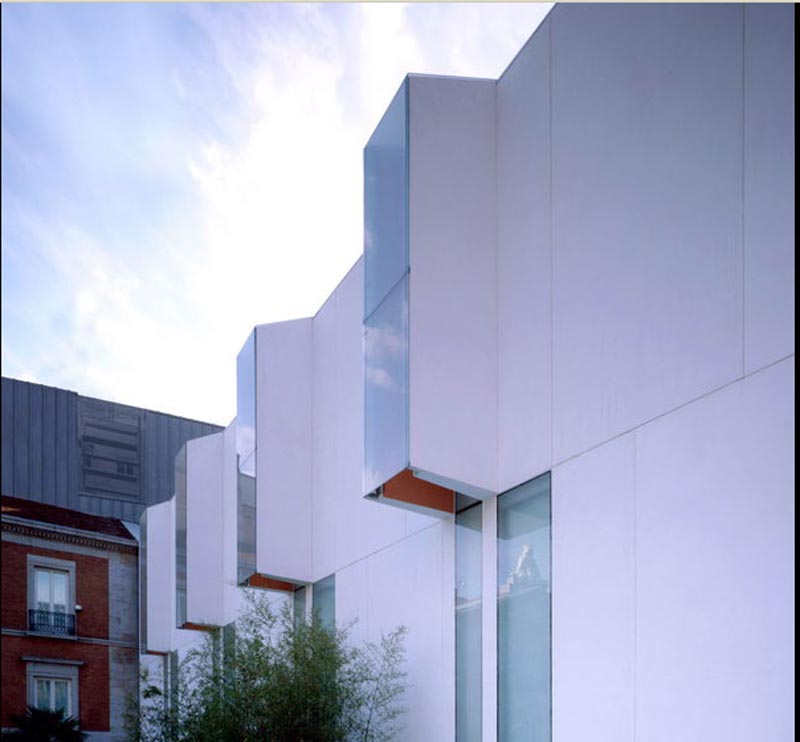 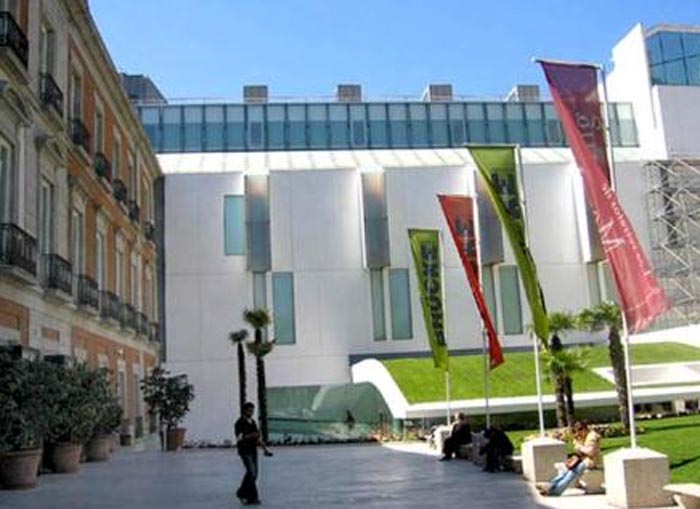 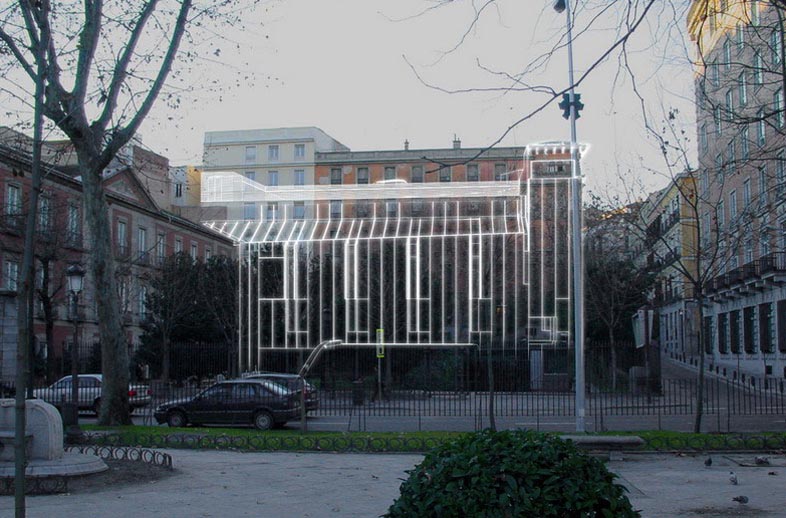 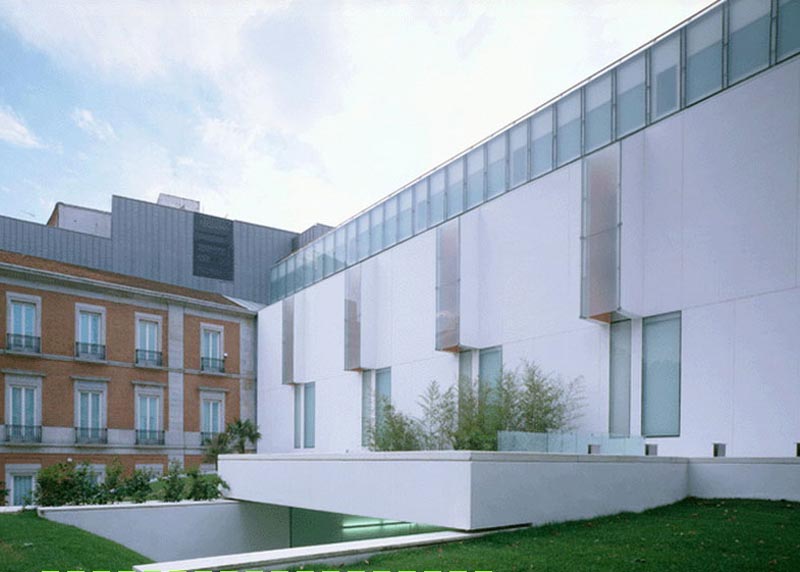 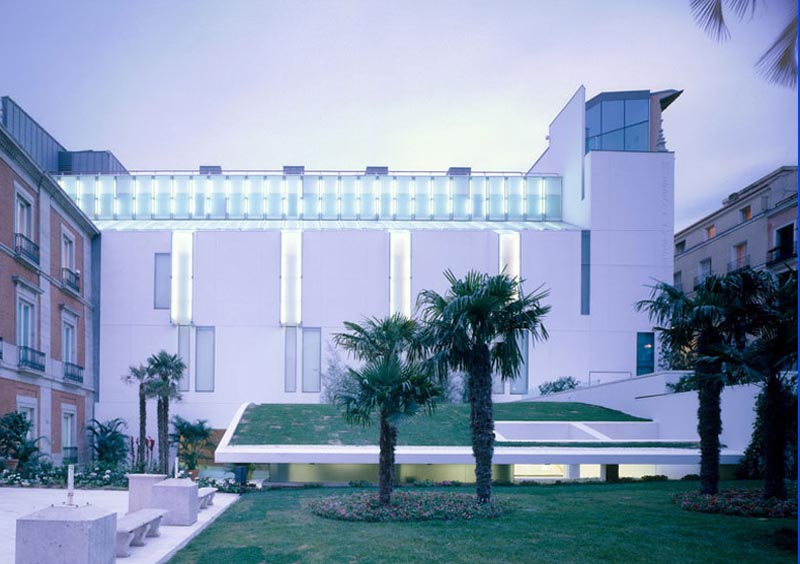 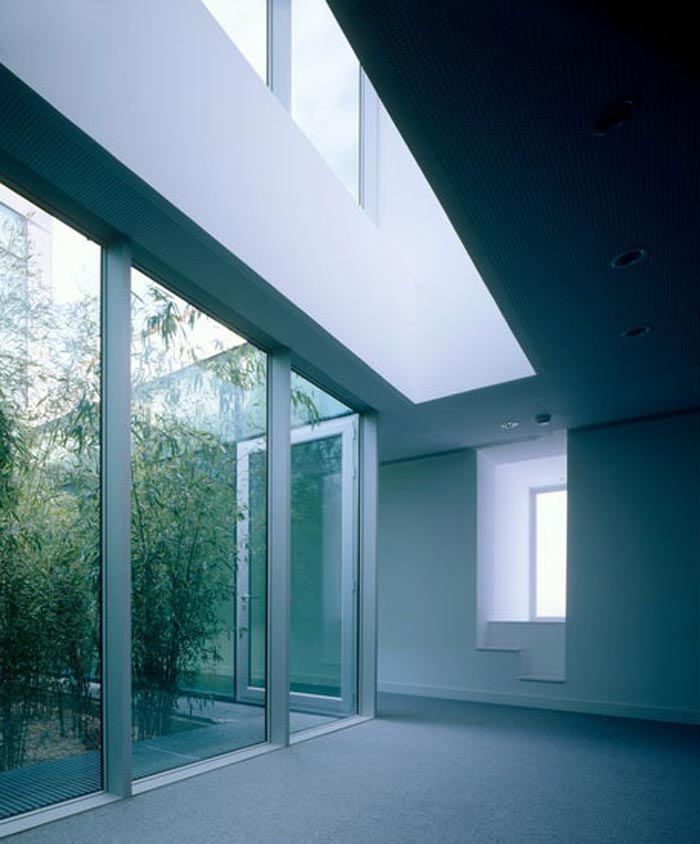 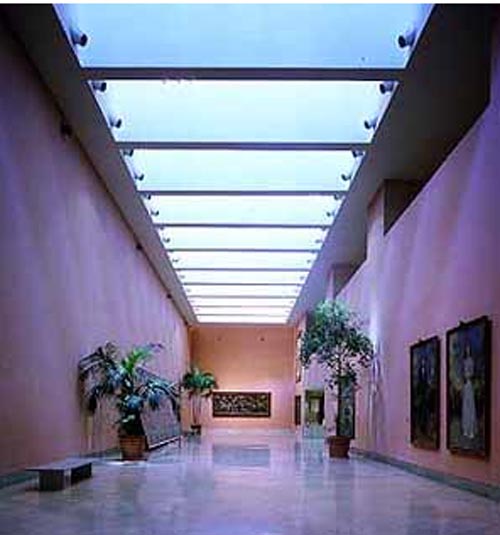 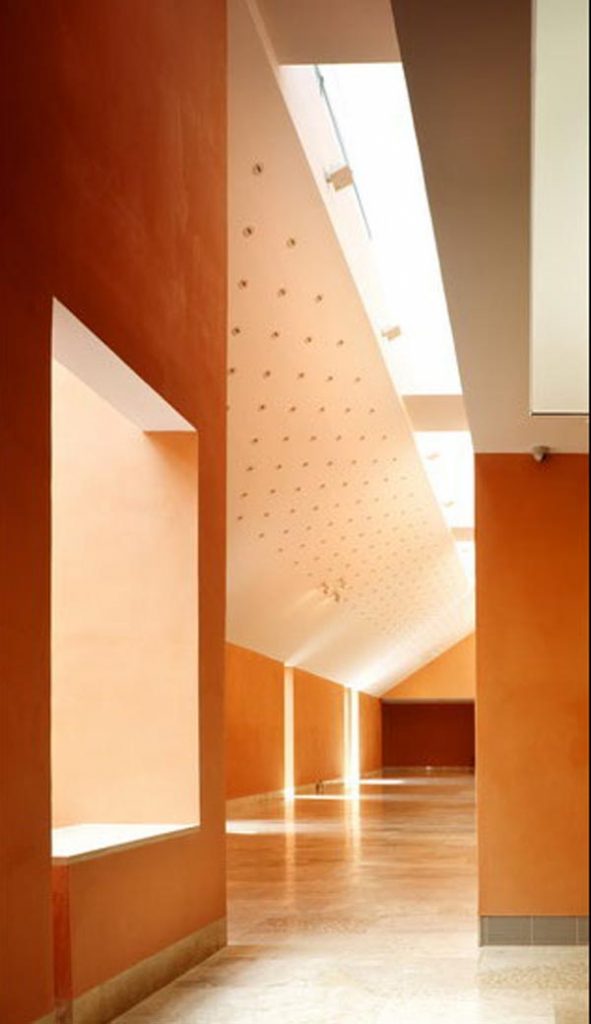 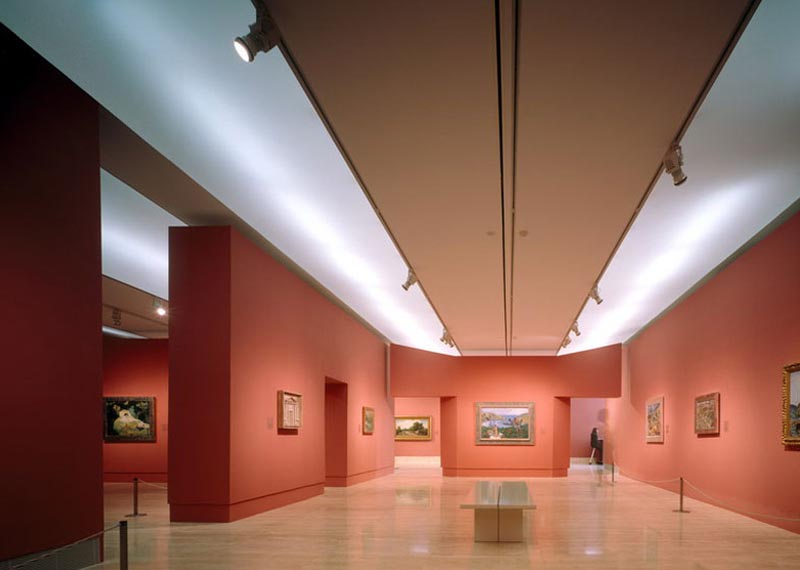 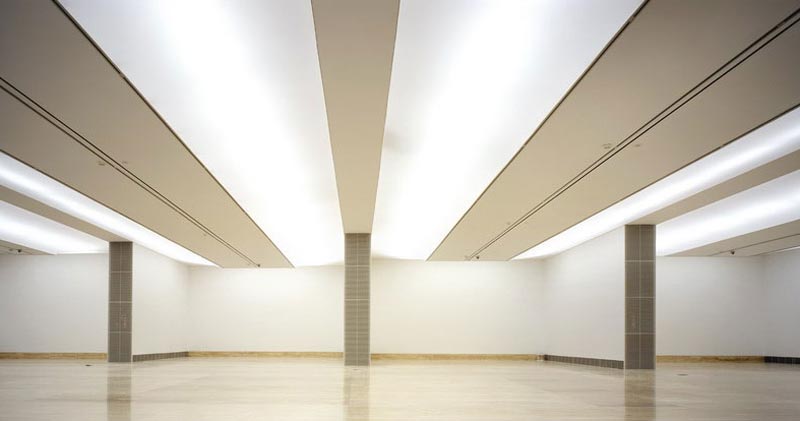 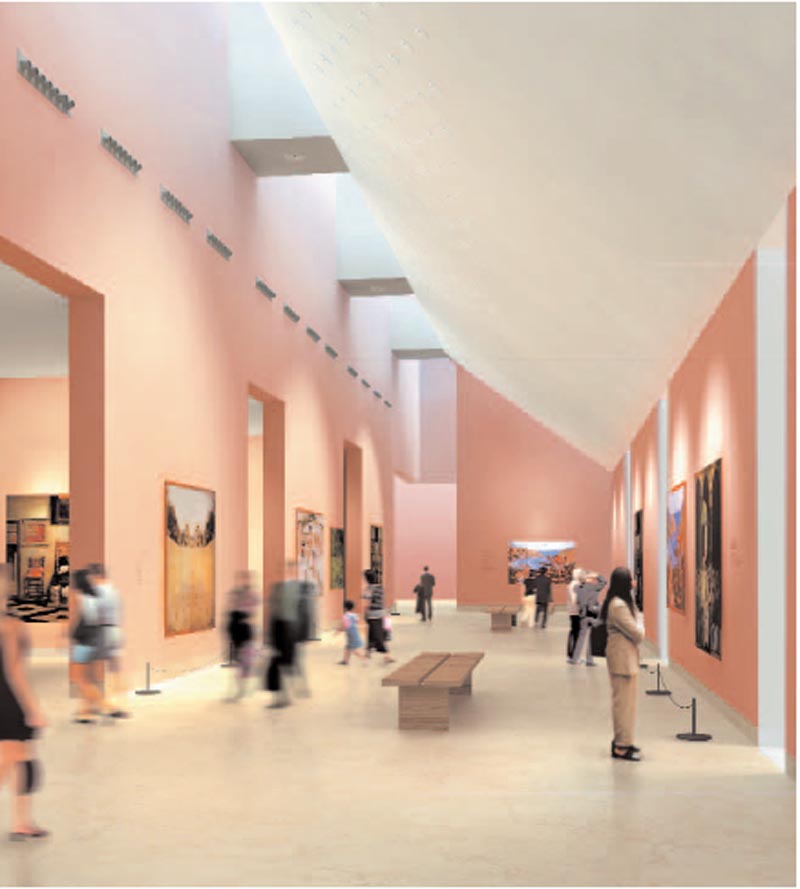