A low deck, screened light and down the sides, colonized by ivy. A gateway is an anchor, and crosses the river. The balcony on Ter, which is the wall that sets the channel closes a multipurpose space which is accessed from the square by stairs descending. And the spirit endures theater.

The RCR study in collaboration with the architect Joan Puigcorbé have combined in this project, which in 2003 won the First Competition Award, citizen reconquista and the transformation of an old theater in urban setting.

The gateway of the public space of the square of the Lyre of Ripoll, connects it with the Ride Maestro Guich and Escorxador Street, located between Portella Can i Eudald Graells room while allowing more direct access pedestrians wishing to cross from the neighborhood of the station to the center of the urban core.

Ripoll, crossing two rivers, the Ter and Freser took the energy of water flows to forge steel and be a reference to the tradition of the metallurgical industry, and known throughout Europe ” Catalan Forge “. 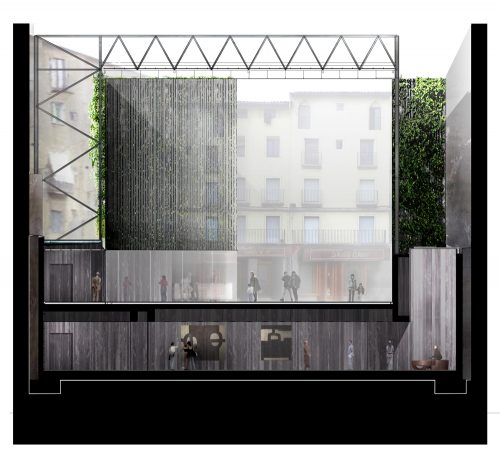 A public space emerged from the demolished theater La Lira, from a street and opposite the Ter river, with its bare medians and yards ventilation neighbors, want to be square, covered, meeting point of arrival and departure, recover the public character with an “empty”, the square shaped space with a unique material, steel, which provides neighbors with peace, modernity and strength, while evoking the past metallurgical Ripoll.

The project maintains the vacuum condition through, gap- scale, but who runs on a platform it will be caught by the discontinuous pace with the flat sides and roof formed by metal bands of varying widths, which filter the light, allowing vegetation to grow and the sun to brew. 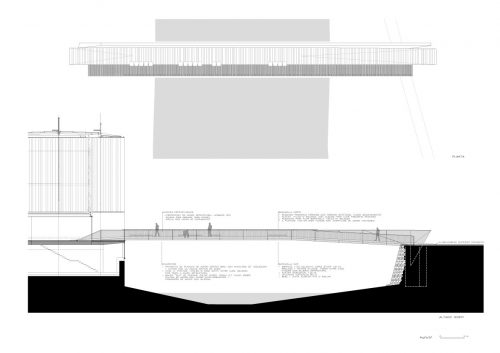 With a record of multiple shades changes from pavement to be umbráculo, covered, in continuity with some vibrant sides colonized by ivy and sparks light, inviting the passerby to stop their march and be carried away with the contemplation of the river or cross through a walkway that connects smoothly with the other side, a modern steel road to access the old historic town of Ripoll, becoming both an element of transition and stay.

The balcony on Ter, which is the fixed wall bed, closes a multipurpose space which is accessed from the square down some stairs going down. Part of the city was reconquered, the void is opened and becomes a public space. The public building public space created, and finally the spirit of the Roman theater.

The new square, part of the architectural ensemble built on the old Teatro la Lira, has a large capacity, it is a place where you can make indoor public events with a
multipurpose room in the basement. 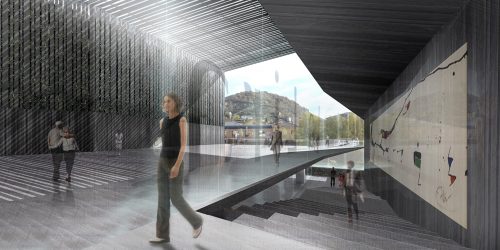 It has a bar in the glass part to the right of the square, towards the Ter River, which has a terrace in the nearest river sector.

The walkway, 44 meters long, has two levels, one for pedestrians and passing zone and another as a space for contemplation, with seating facing the river.

For transportation and placement of large-tonnage truck and two cranes were used.