Between 1985-1996 the architect Alvaro Siza Vieira carries out the design and construction of the Faculty of Architecture of the city of Porto until then was integrated into the Faculty of Fine Arts.

Functionalist architect trend is resolved in your project all future problems that a building of this magnitude can reach present without neglecting other important issues such as shape, space and the atmosphere surrounding it.
The first building was built between 1984 and 1986 year in which the adjoining plot that allowed the construction was obtained grow, stretching its construction until 1996

The Faculty of Architecture of the University of Porto (FAUP), is located west of the center of the city of Porto, Panorâmica Via Edgar Cardoso, 4150-755, Portugal, in the Campo Alegre, where even many nineteenth-century villas are preserved and enjoys abundant vegetation. It is a floor terraces above the river mouth.

The location of the School whose first site was allocated for the project in 1984, has two major territorial characteristics:

1- It is a space being on the banks of the Duero River presents a landscape and a remarkable vegetation.

2- Being located in the middle of the access to the Porto-Lisbon motorway is given an intermediate and peripheral character.

Adjacent to the old stone wall of the estate, the new faculty buildings stretch out along two vertices of the triangular site, enclosing between them a courtyard and meeting place.

The construction was carried out in two stages.

The first between 1984-1986 called “fifth Povoa” is performed in the first plot. It Alvaro Siza rehabilitates two stays and builds a building, all of them independent and connected through outdoor spaces.
The name comes from Povoa fifth farm occupied the land, which rehabilitates Siza building Cor Rosa house and stables, integrating the woodland garden and retaining its original character.

Known as Carlos Ramos Pavilion was the first to be built in the northwest corner of the garden, but soon outgrew its capacity given the large number of students.
With trapezoidal shape of U inspired by eighteenth century Portuguese villas it offers protection and opening at a time, facing a semi open courtyard. A peek inside space numerous classroom windows. Its two floors contain classrooms and services.

The second stage lasts until its completion in 1996 is performed on the second plot V-shaped and is known as “novo building.”
The topography of this second solar are crucial to the development of the final project by determining the separation of parts of two main axes.

The 4 buildings are more ordered following a rhythmic series with the V-shaped terrain and interact around a semi open space.
On the long axes of the site, on the south side volumes are exempt and follow a rhythmic separation opening to the river. On the north side they are continuous, thereby creating a backdrop that serves as acoustic and visual barrier facing the highway.
On the north side the building form an articulated sequence of volumes joined together.

The whole school of architecture is made up of 10 pavilions V-shaped and U surrounding a central plaza. These buildings are connected to each other, in some cases by more than one point.
The volumes of the main building and towers converge westward, where a cafe pavilion and outdoor terrace mark the entrance to the building. At the opposite end, the courtyard leads to an elevated grass platform, which in turn goes through a series of ramps and stairs to the former estate and garden, giving access through a narrow gate to the Carlos Ramos Pavilion. Established at the apex of the estate, this simple two-story structure is a brief summary of the plant yard, a classroom building U-shaped, with its two wings converging at a sharp angle. While its exterior facades are blind, the large pivoting windows facing the interior courtyard allow complete transparency between the classrooms on either side of the building, and views beyond to the garden and to the river.

4 pavilions facing south have views over the River Douro due to the separation of several meters that was left in its construction not building and the space that had occupied a fifth tower whose only record is a built in time base. These volumes are reminiscent in its plant but not in the elevations and configurations while maintaining a steady pace of alignment with the walls of the estate and the old Casa Cor- de-Rosa. In these workshops and offices of professors and study rooms are located. All with the same surface differentiation found in the windows, some protection from sun, others like framing the landscape.
These towers are connected to the main building by a series of corridors below the plaza.

The north-facing, a continuous volume, building aligns with the Porto-Lisboa motorway noise as protecting the inner courtyard. These interconnected underground buildings house the offices of the Faculty, amphitheatres, the semicircular exhibition gallery and library, all hinged together. On the ground floor brokers also connect the buildings. Library Siza seeks natural light through a skylight.

Agora matter of the central triangular space that functions as “open courtyard” regulates and integrates the full range of the School of Architecture.
Alvaro Siza makes a topographic survey of the land, not only to order volumes, but also to develop the space created between them which serves to civic, social and urban functions. Their morphology is complex and attractive, with roads, courtyards, walkways, ramps, stairs and galleries, offering a breath of fresh air as opposed to enclosed spaces of the cloisters.

The complex is divided into two groups of volumes. The North Side solved linearly and south, composed of four interconnected buildings at low levels. Siza webs used for reinforced concrete structures in some cases function as vertical or horizontal beams, essentially in the large openings in the walls and cantilevers, since these are rare as the presence of pillars.

The slabs of plants, also of reinforced concrete, are solid plates allow armed cross with bidirectional resistance thin, large clearances.
Where spaces were further open, such as auditoriums, it was used to solid slabs of steel and concrete. This system facilitated direct continuous foundation that offers greater rigidity than the fragmented or differential would have been necessary due to the terrain.
The network of interior walls, also of reinforced concrete and raised in two directions, resist horizontal actions. The massive use of reinforced concrete responds to ease this material provides for controlling cracks and the consequent deformation and durability of buildings. To this an outer shell of thermal insulation that helps control the drawbacks in the structure can cause the sudden change in temperature was added.

The materials used inside the newest addition include exotic wood for the floors and paneling, marble foyers and stairs, specially designed furniture for the classrooms, auditorium and library, and skylights which draw natural light into the spaces main. 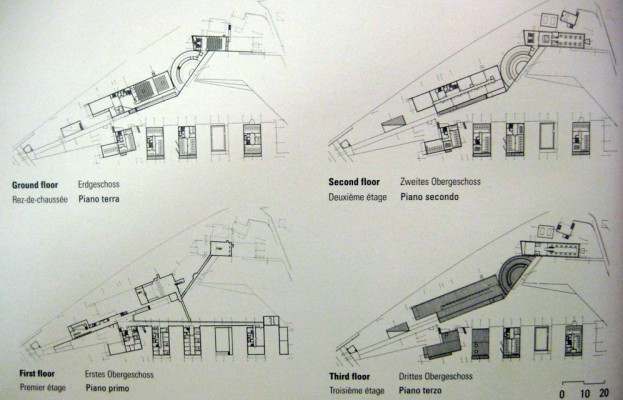 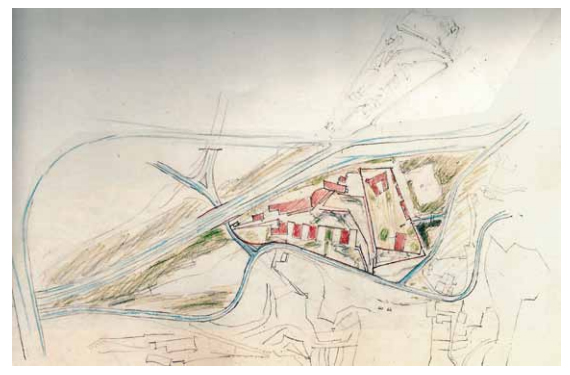 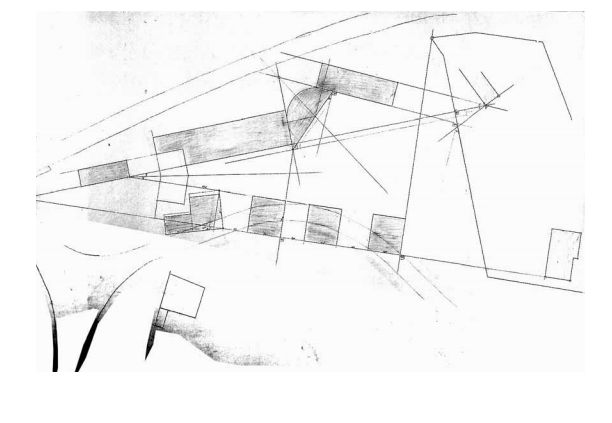 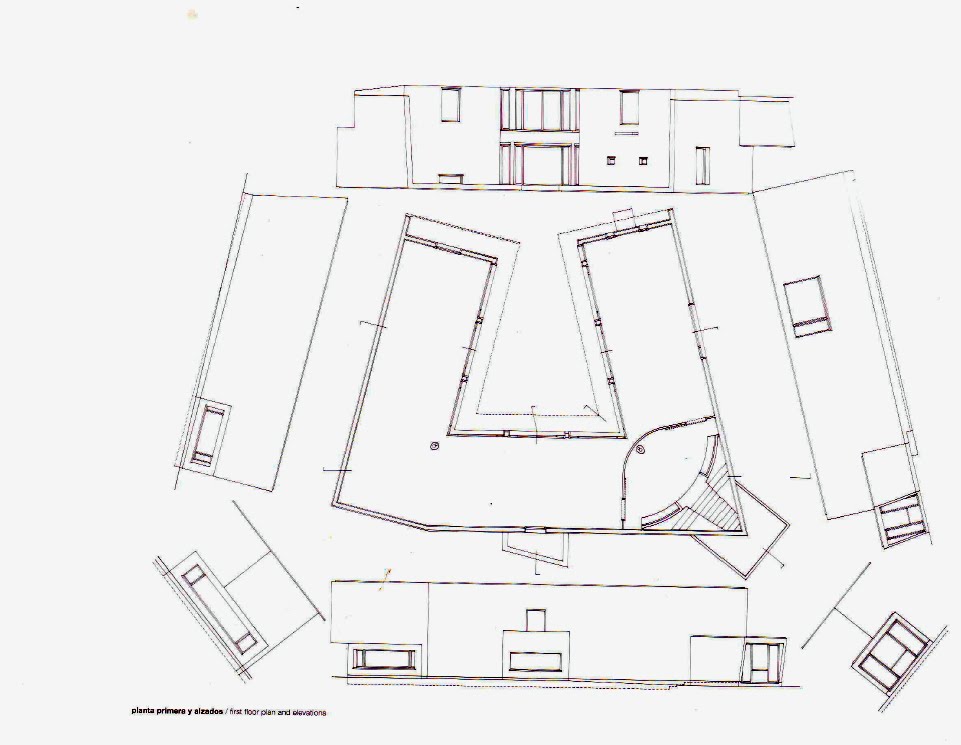 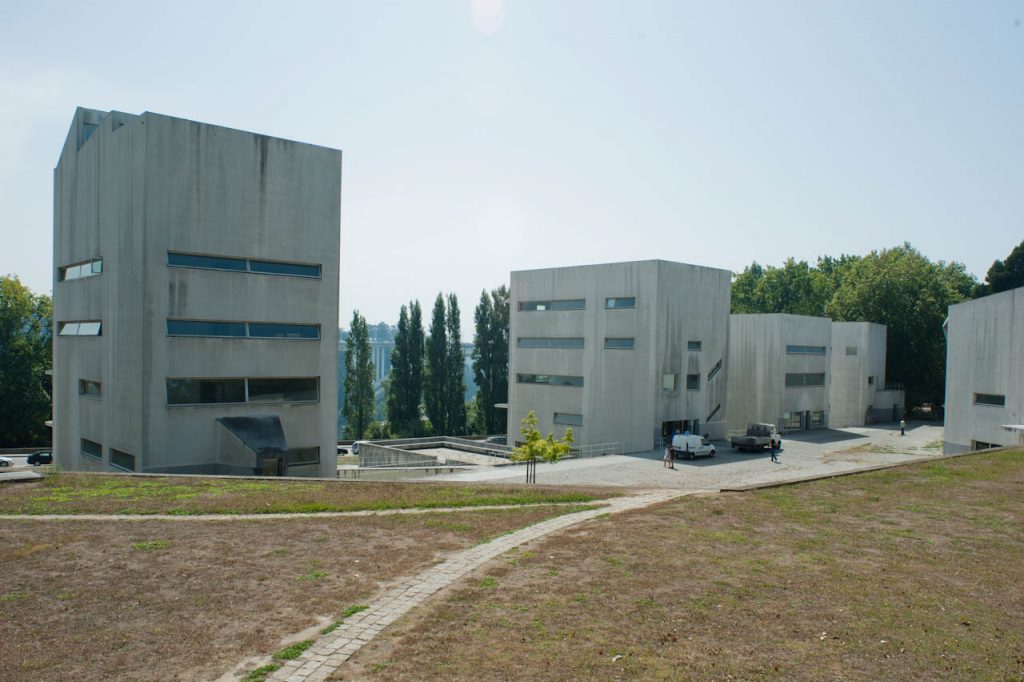 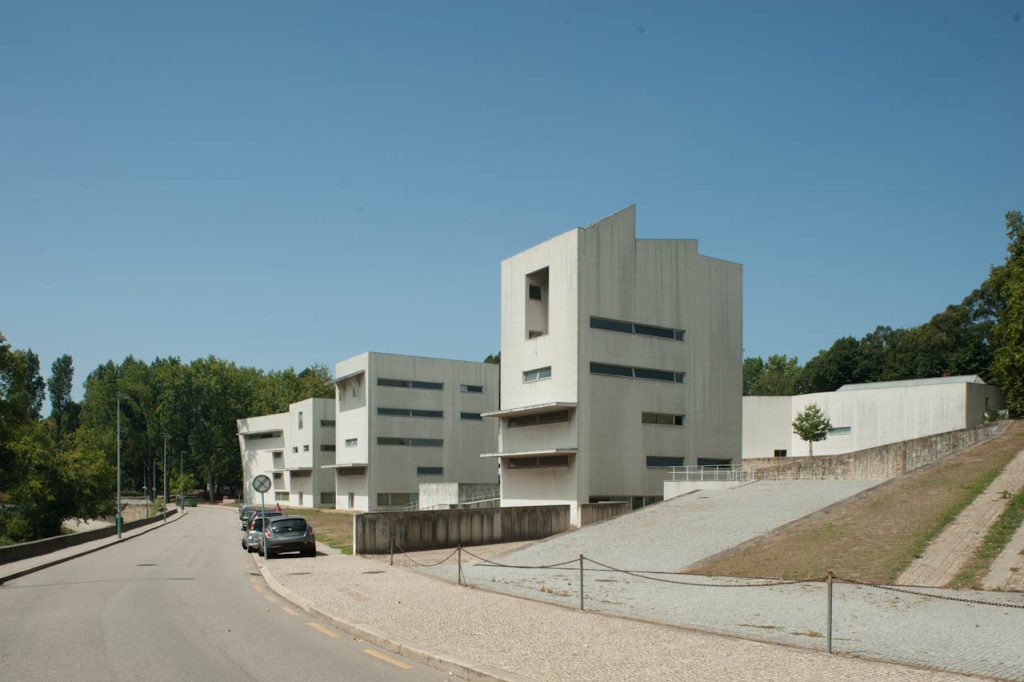 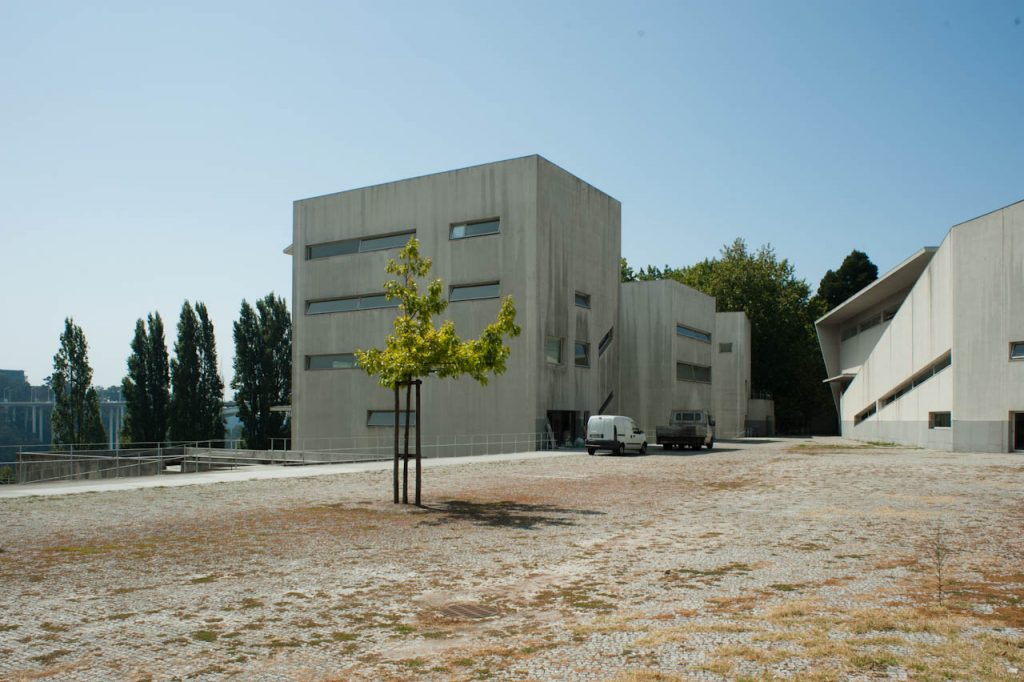 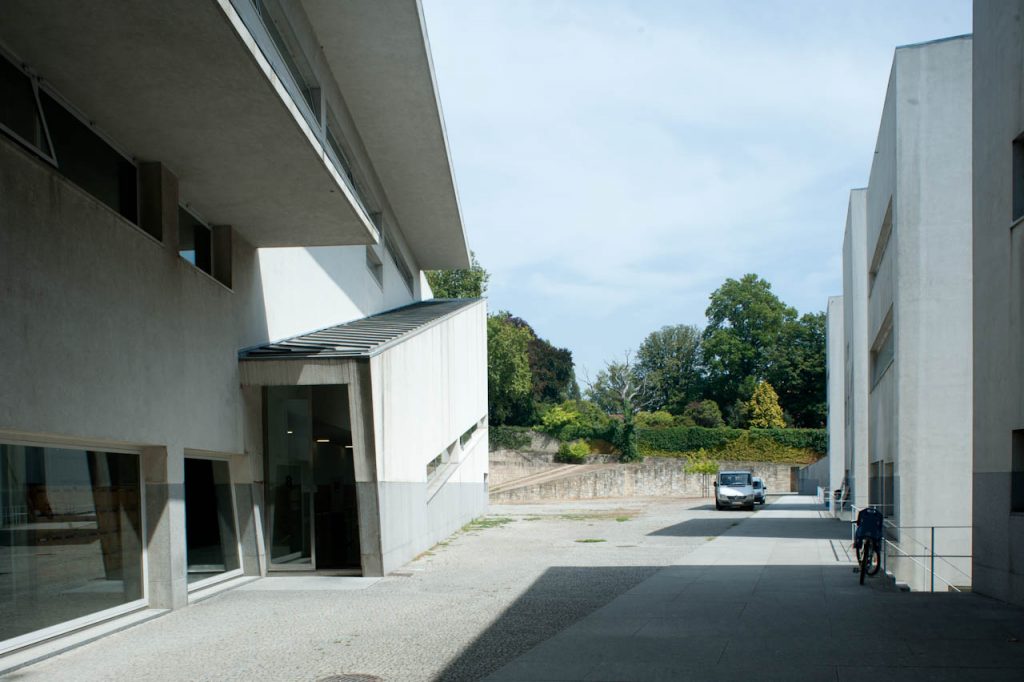 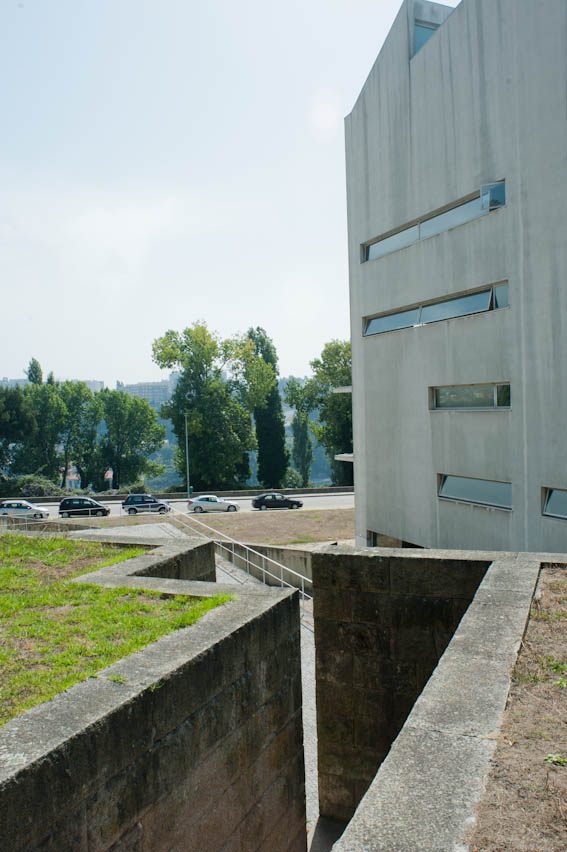 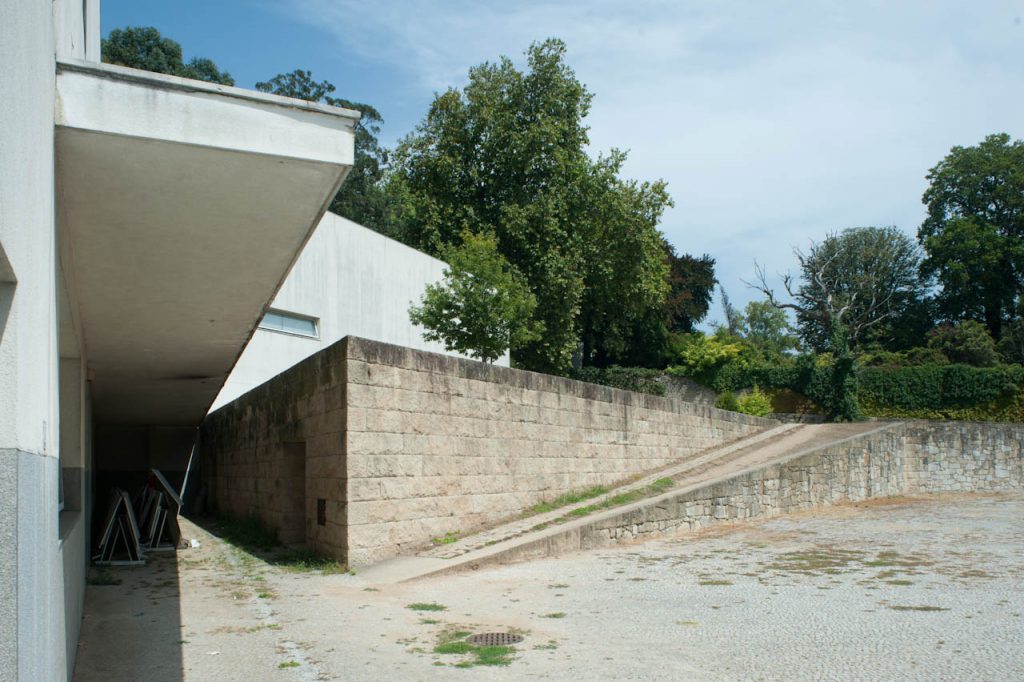 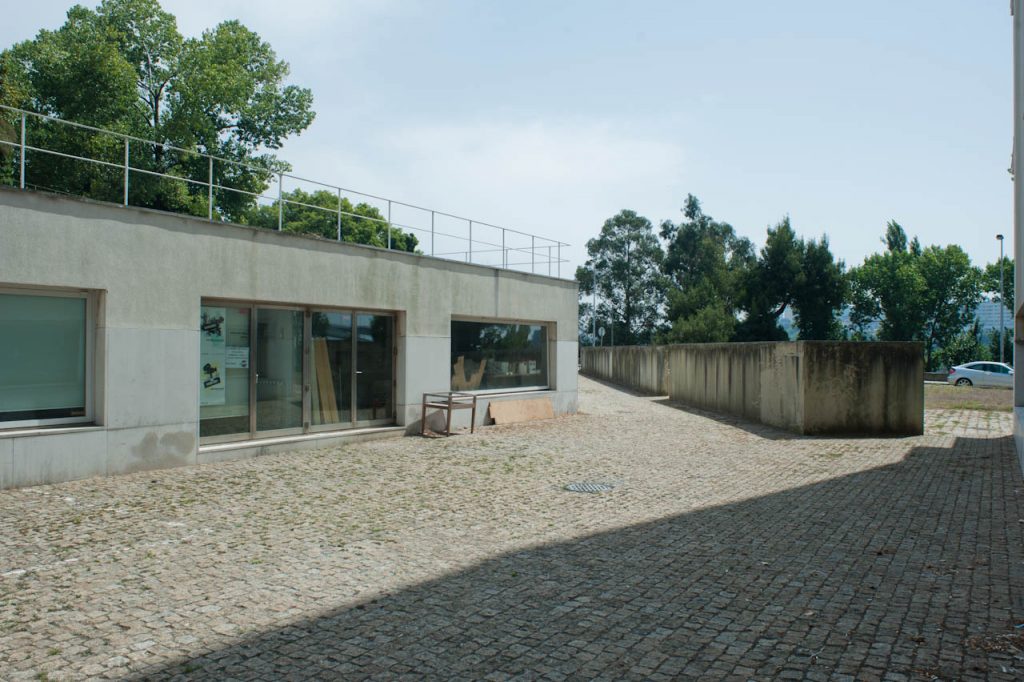 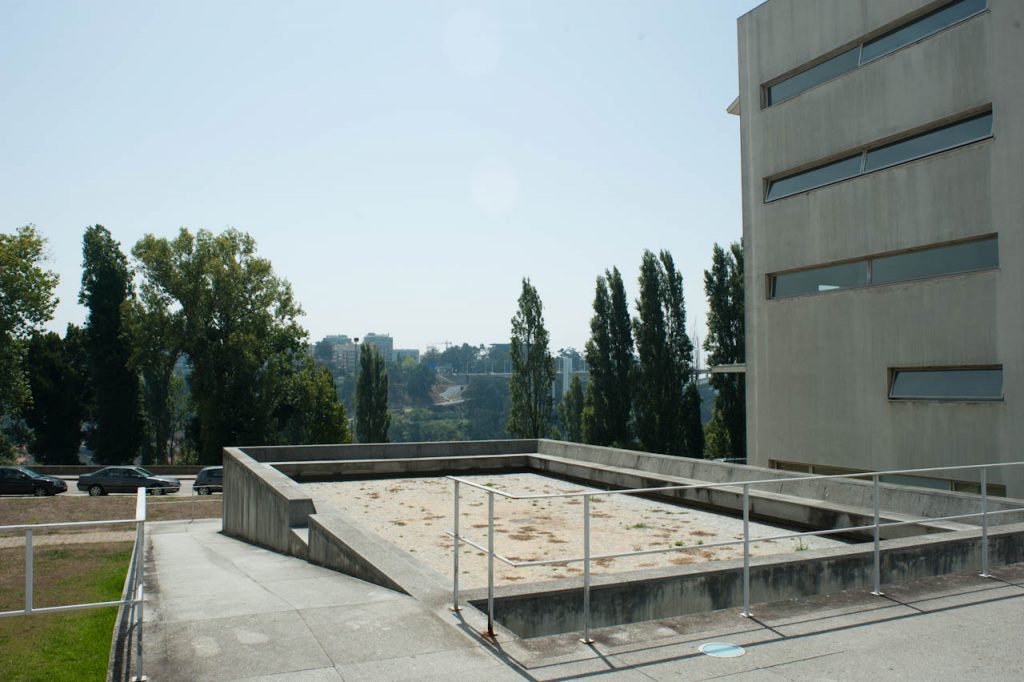 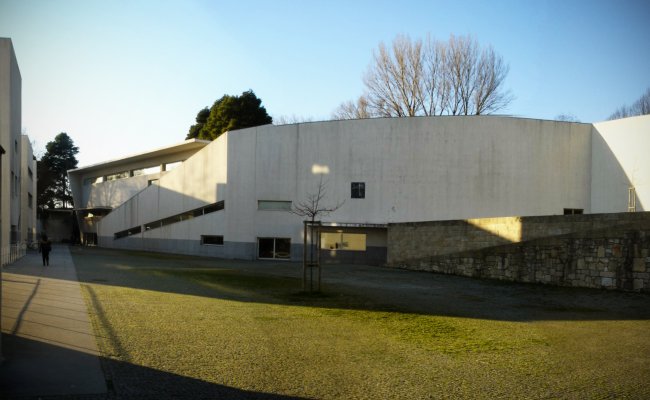 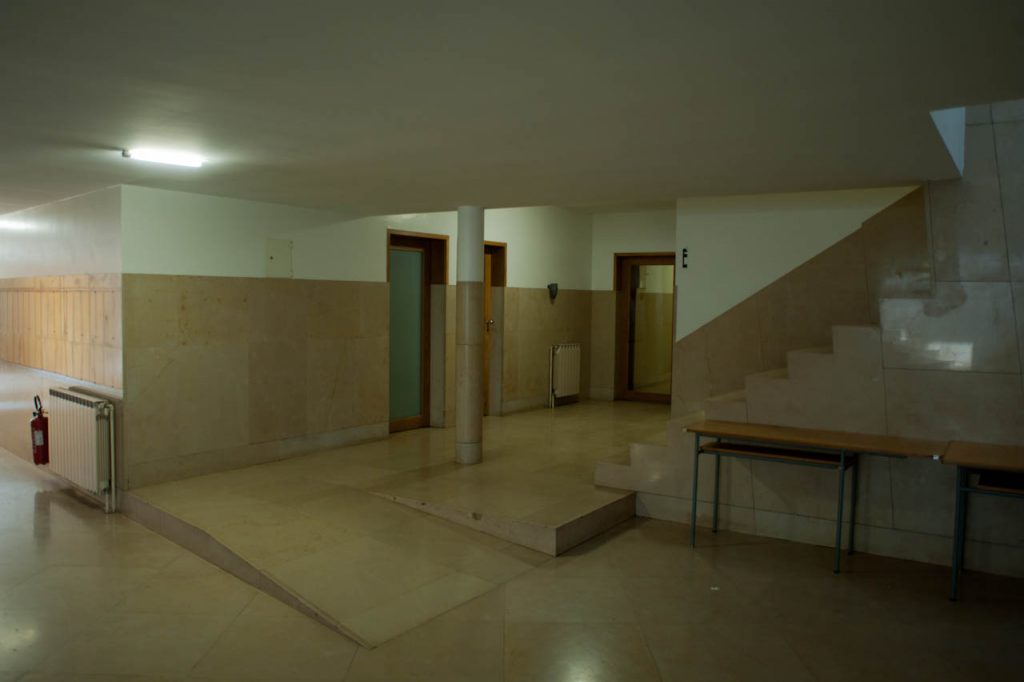 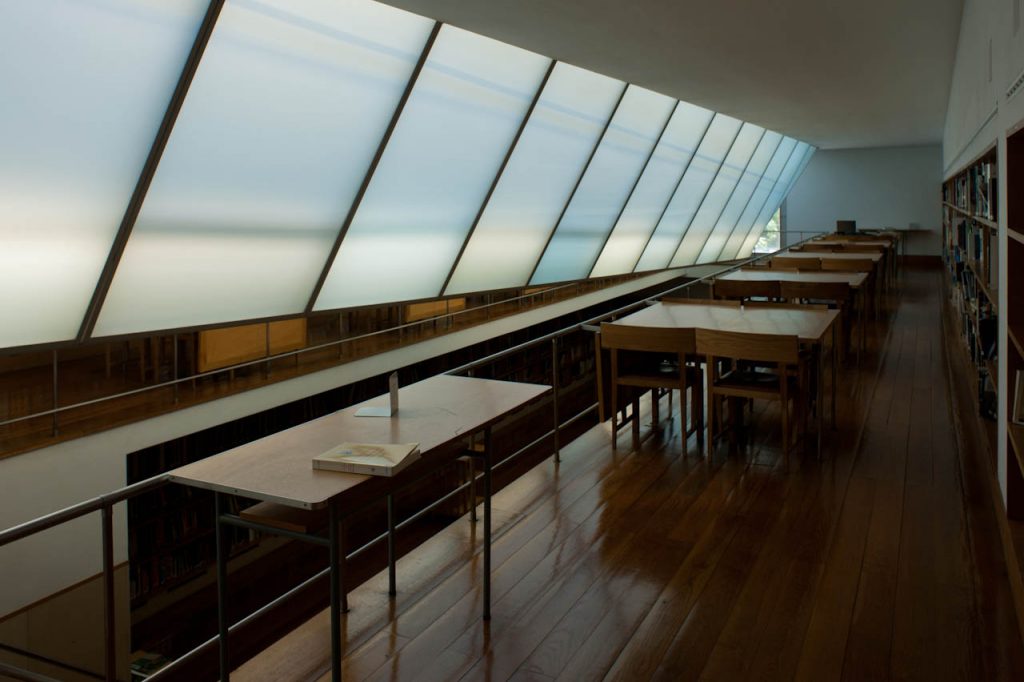 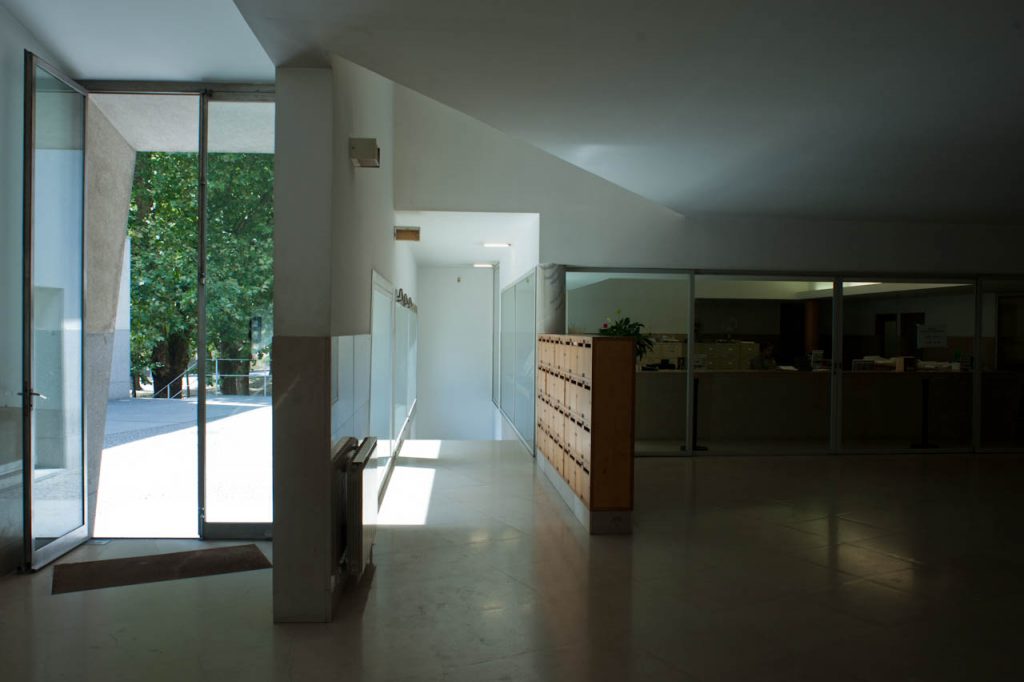 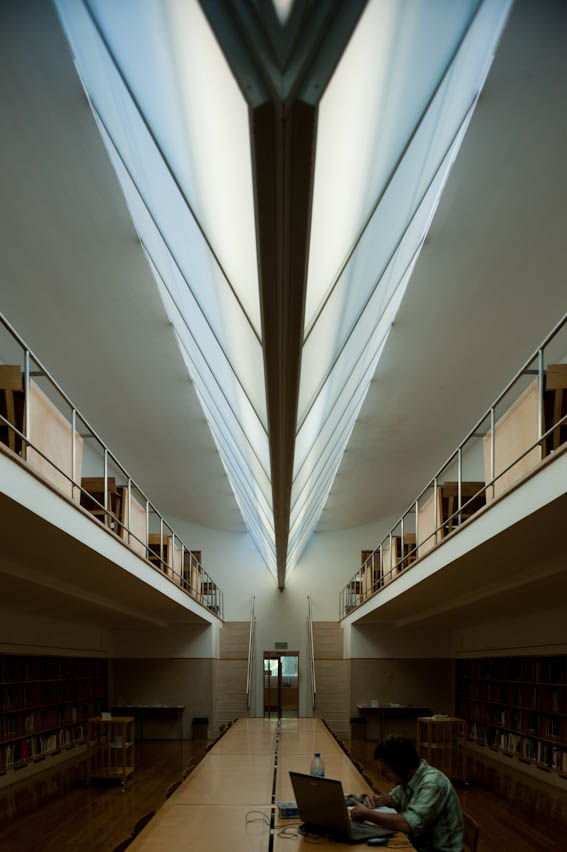 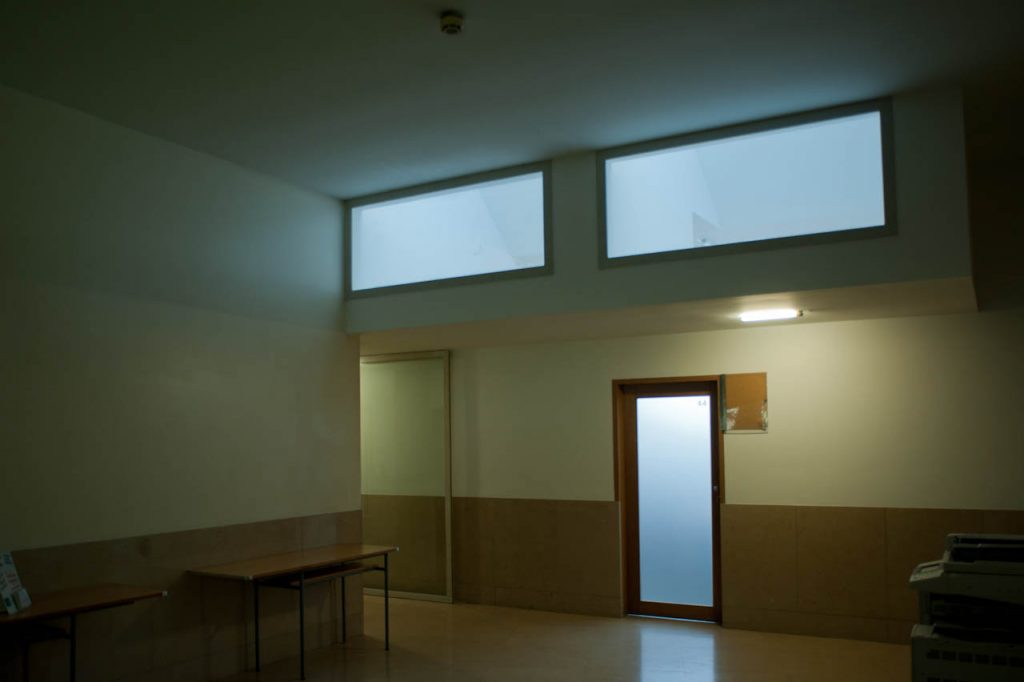 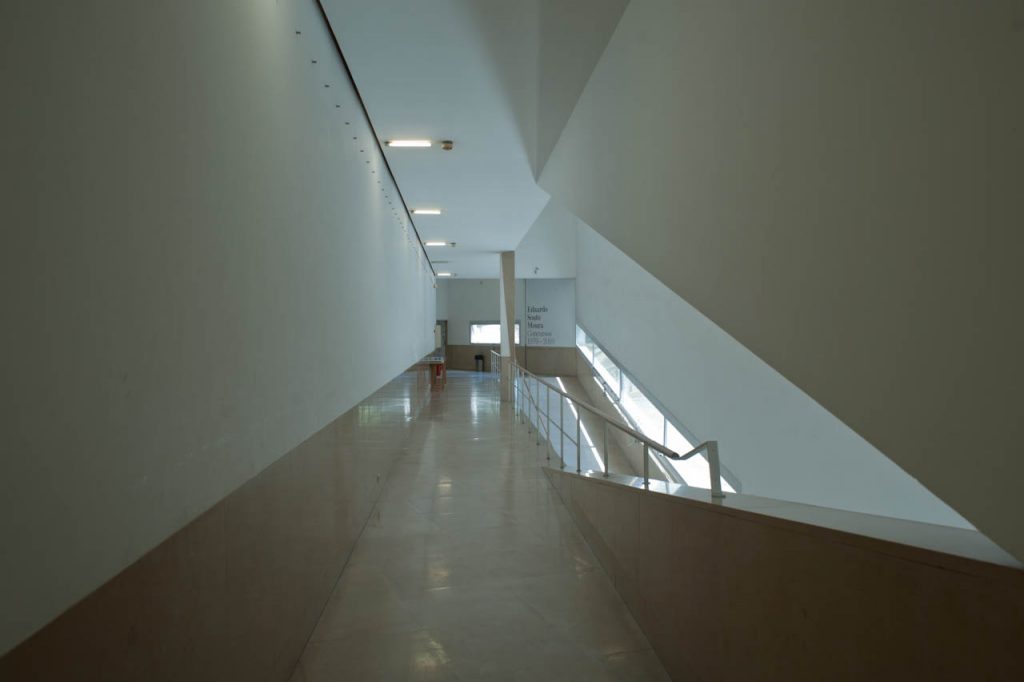 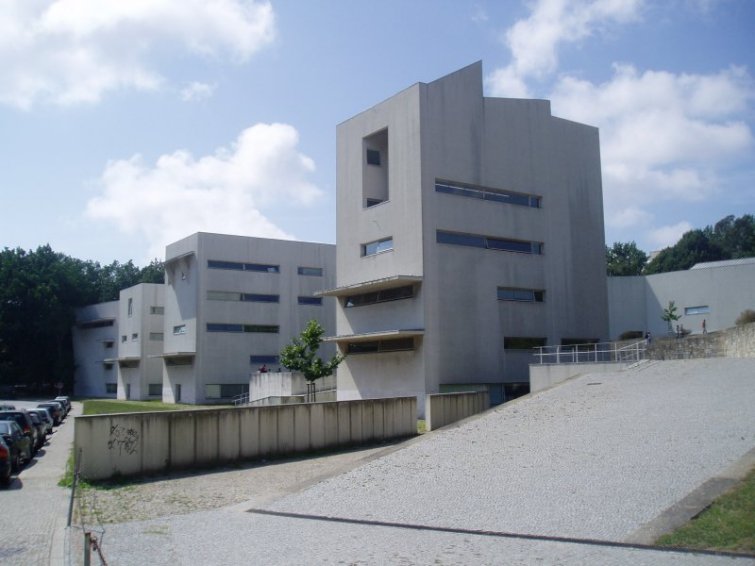 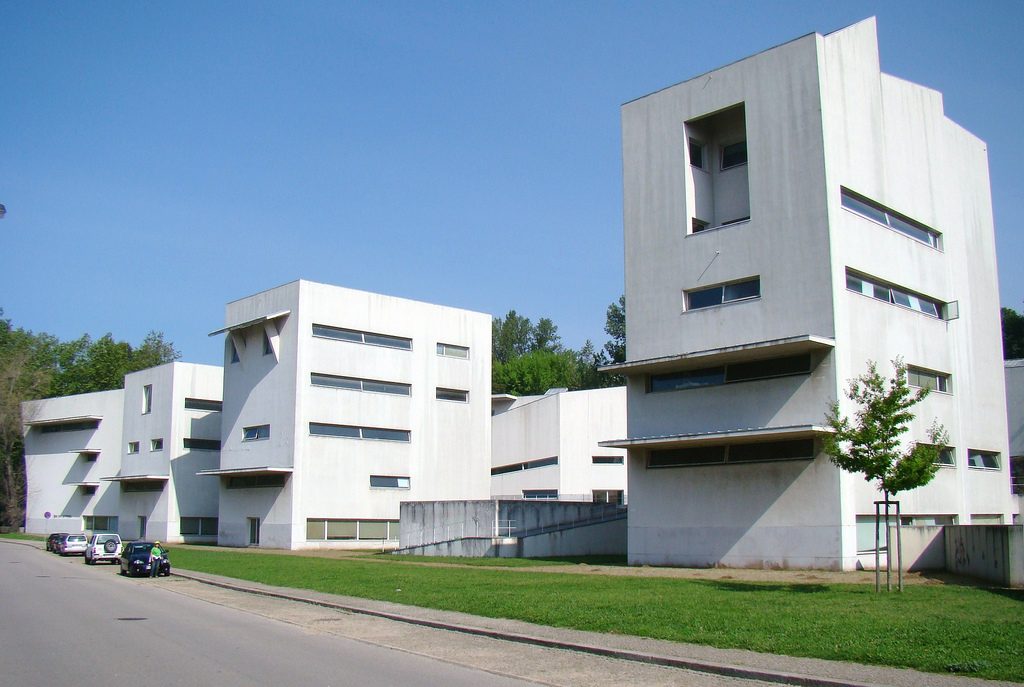 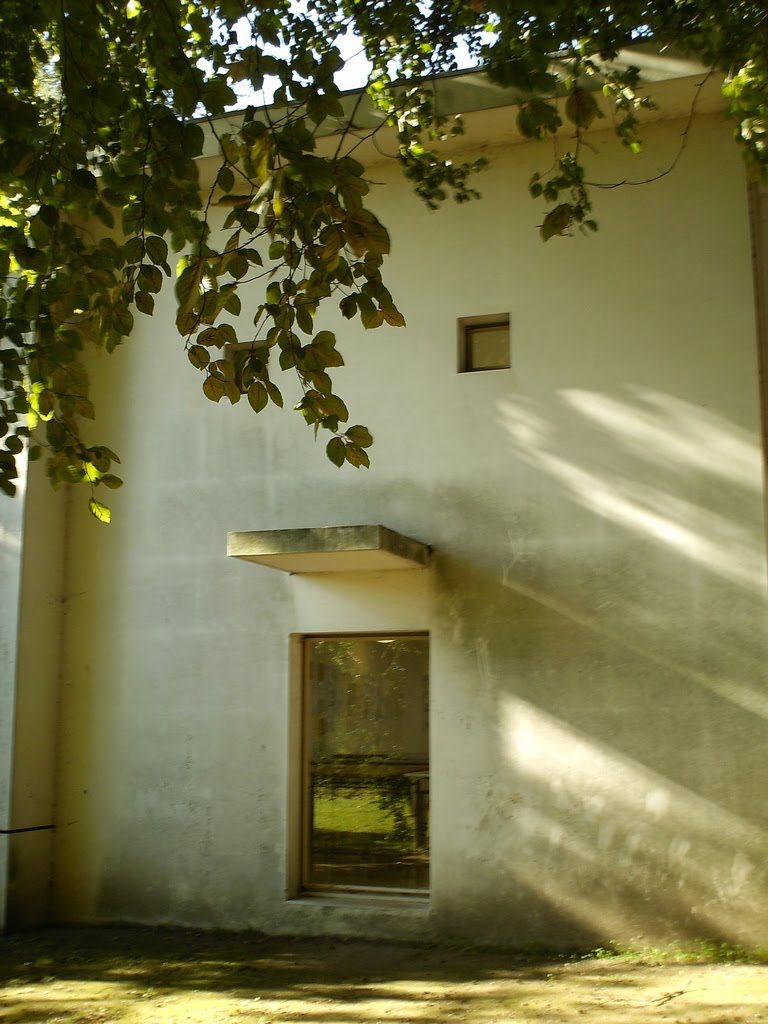 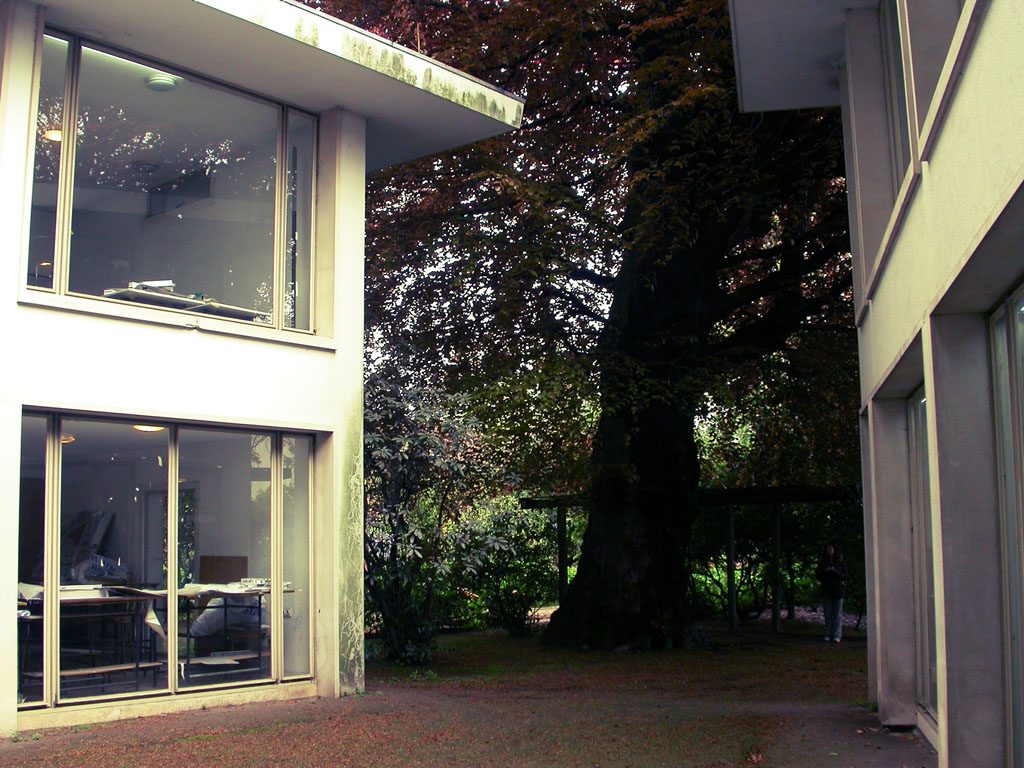 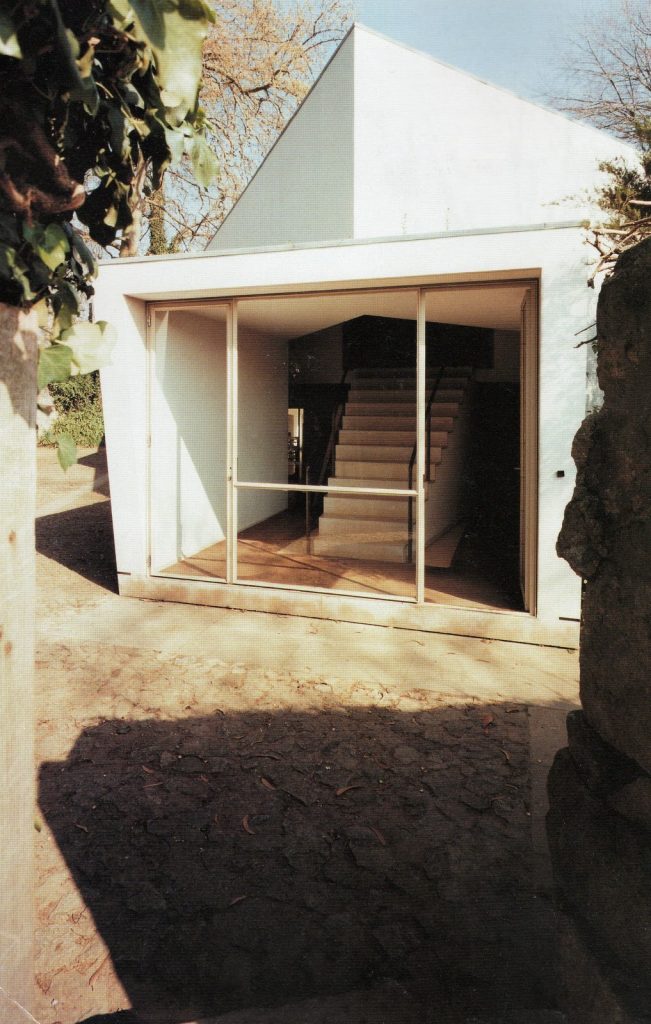