Designed by architect Toyo Ito and b720 Arquitectos study, led by Fermín Vázquez, the architectural priorities is to respond to the environment and become the gateway to the city of L’Hospitalet de Llobregat and Barcelona International Airport El Prat.

The project comprises two distinct towers that maintain a subtle dialogue between them.
Although both buildings have a clear contrast in forms, together achieve a harmonious and complementary. The buildings-high 110 each, have a strong symbolic value, and that celebrate the historic Venetian towers give way to the fairground of Barcelona Spain plaza.

The tower hotel (PB 25) is designed with an organic form, and its perception is changing as the surroundings.

Given the difficulty of building geometry, the exterior has been divided into two skins. The interior is a watertight enclosure based on a mild solution of curtain wall with aluminum and glass panels designed to ensure the acoustic requirements, thermal, and sealing.

On the other hand, the exterior facade is conceived as a second skin that gives texture and variable geometry of the tower. Your skin is made of aluminum tubes independent subject at their ends by hinges to allow the desired torque.

The relationship between spherical, aluminum tubes and the structure that holds the project allows suits and ruled continuously over the entire surface of the facade expressing rotation, translation and growth as it rises in height.

In this way, the tower is divided into three thirds.
The geometry of the first two parts only rotates and moves in different ways, while the third, the plant is deformed and is scaled to increase the area and perimeter of the tower.

This fact becomes even more apparent by being cut at the core of the office upon arrival facade, invisible vertical plane, coincident with the main axis of the proposed Plaza Europa.
The perception of twist and translation produced by the hotel is complemented and have an answer in the second office tower.
This is a pure volume at first sight, equipped with a glass curtain wall on the slab set back slightly, but its core vertical red on the side of the floor, also organic, becomes a reflection of the hotel tower.
Between the two towers, and connecting them stands a common atrium.
A large base connecting the two towers and multiplies the effect of the same by the impact of its structure.
Its unique look, along with its 110 meters high and 80 108 sqm total built area of both towers, the project becomes a new milestone in the new Europe Plaza, the city of L’Hospitalet de Llobregat and in a clear reference in the skyline of Barcelona.

The project consists of three distinct uses: hotel use, office use and commercial use. The various uses are distributed as follows: 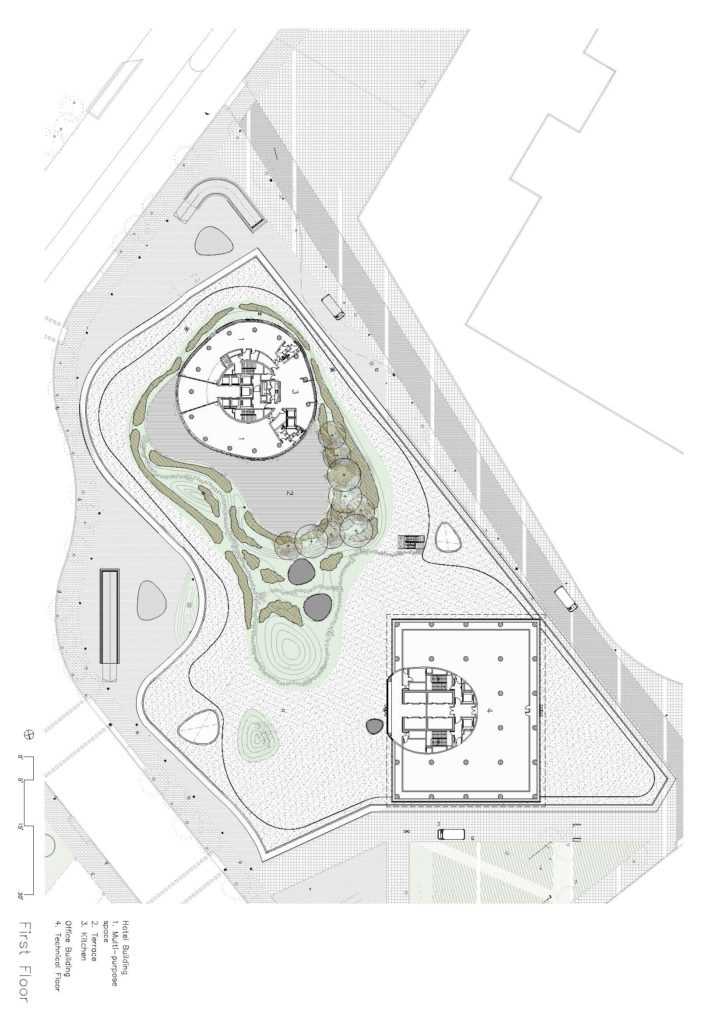 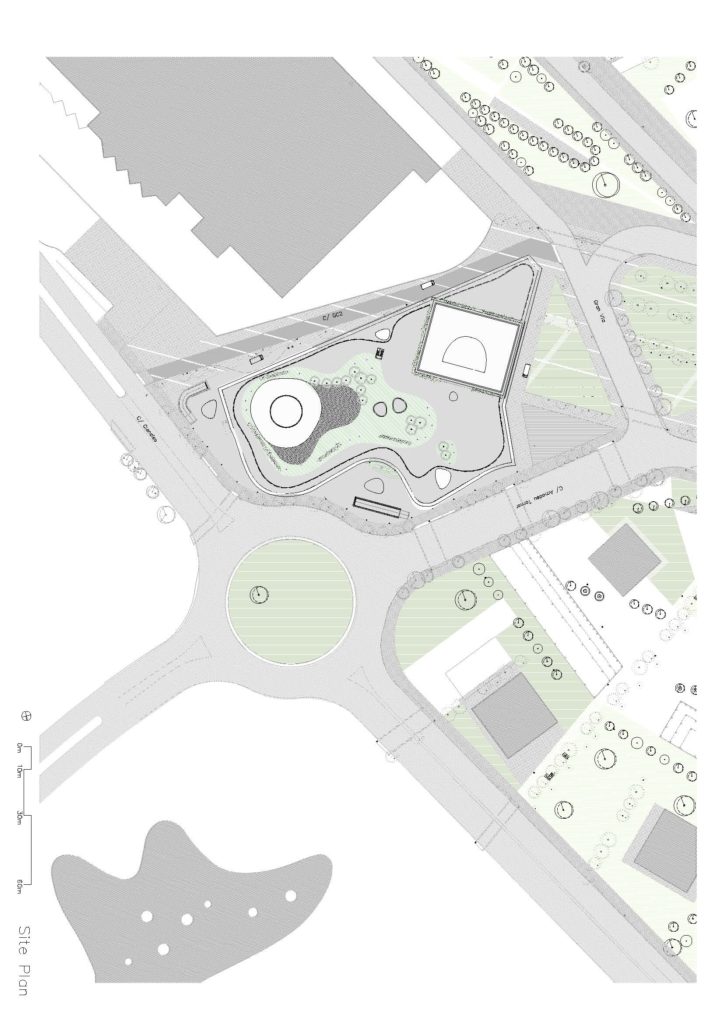 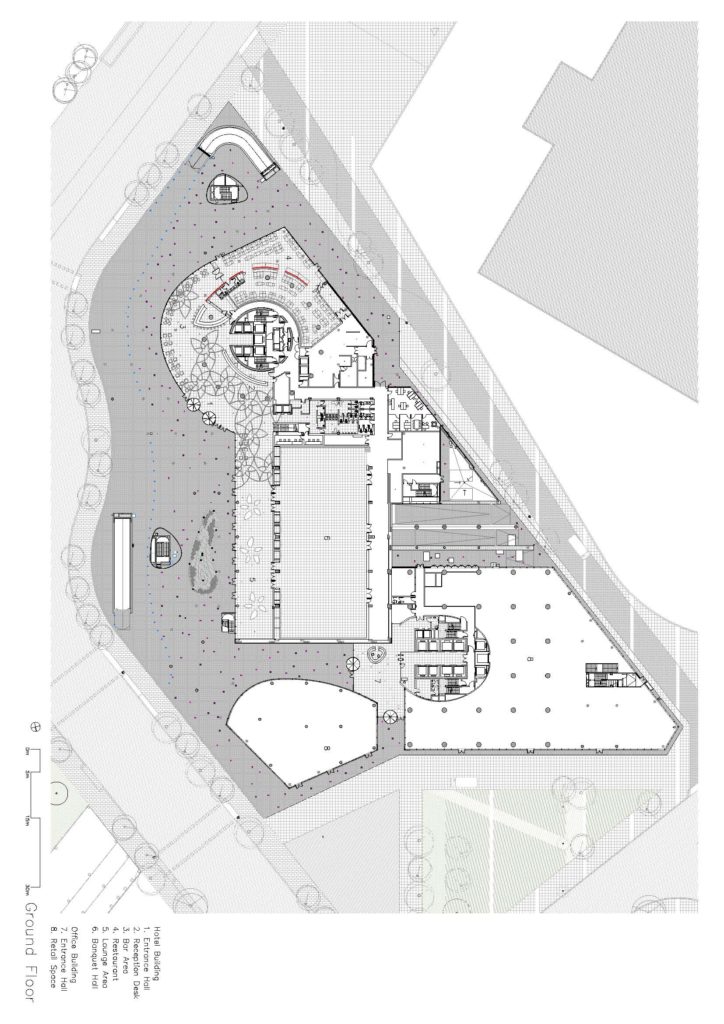 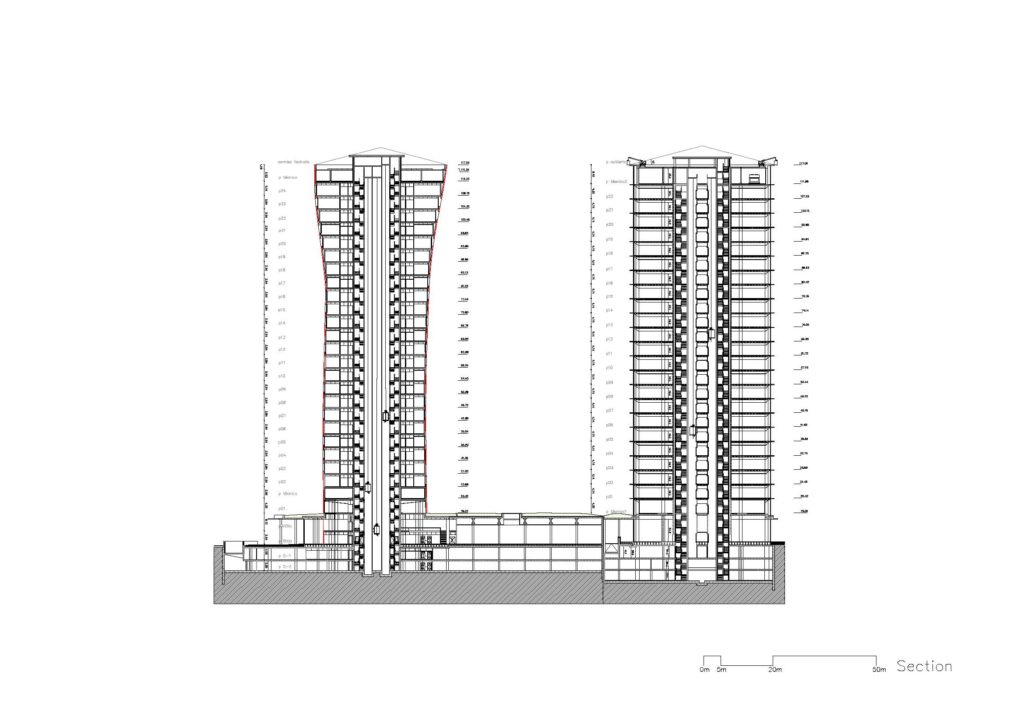 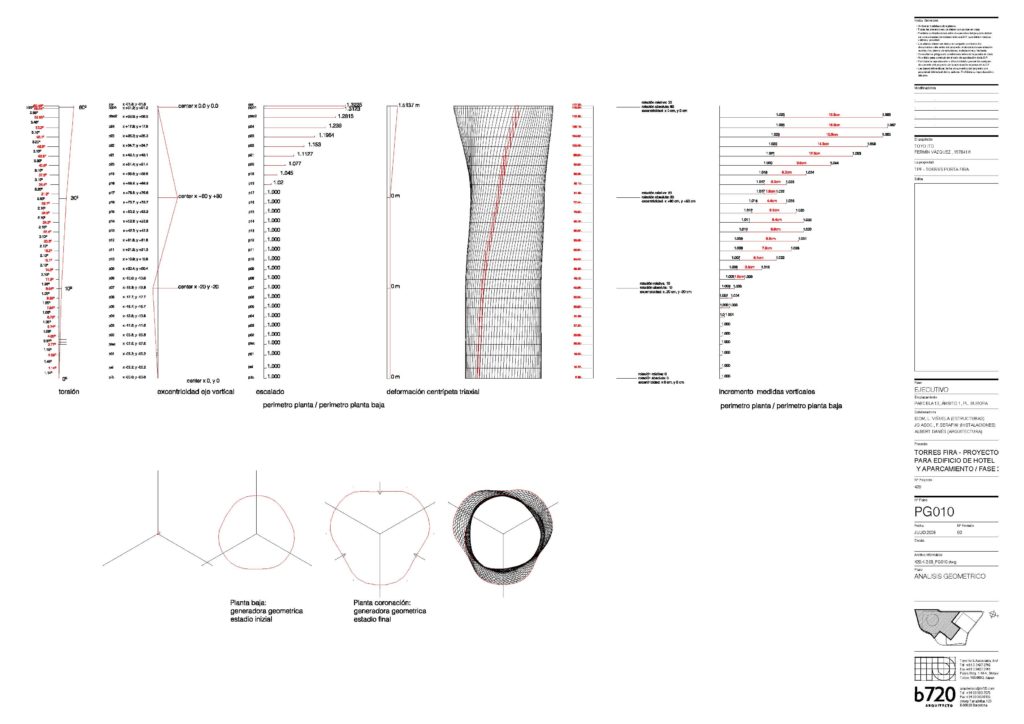 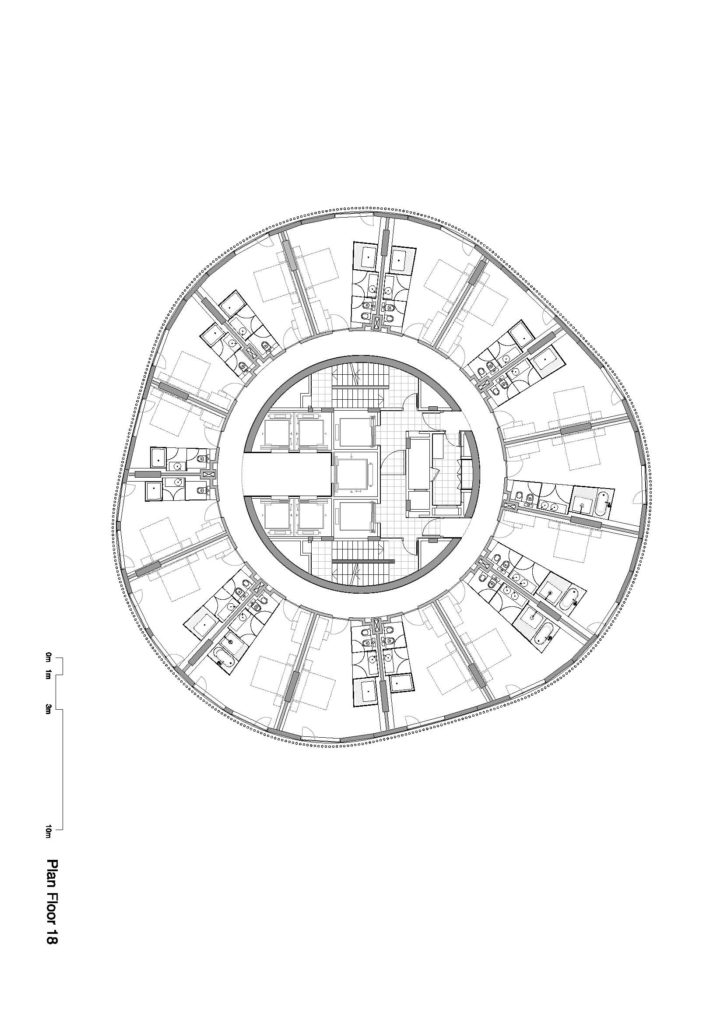 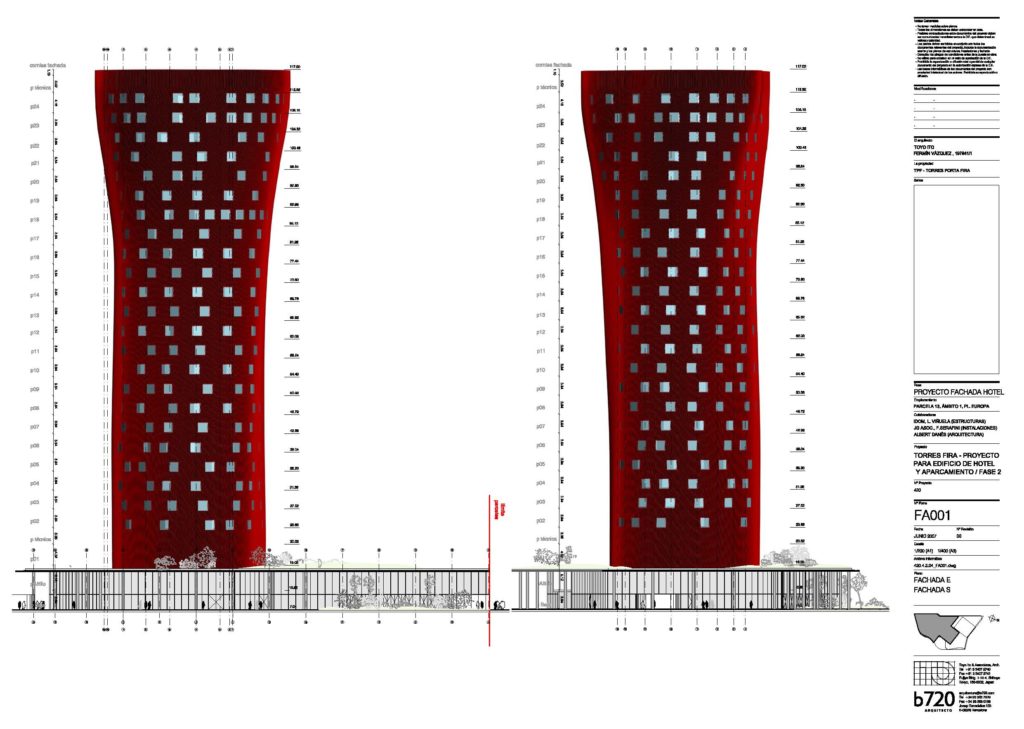 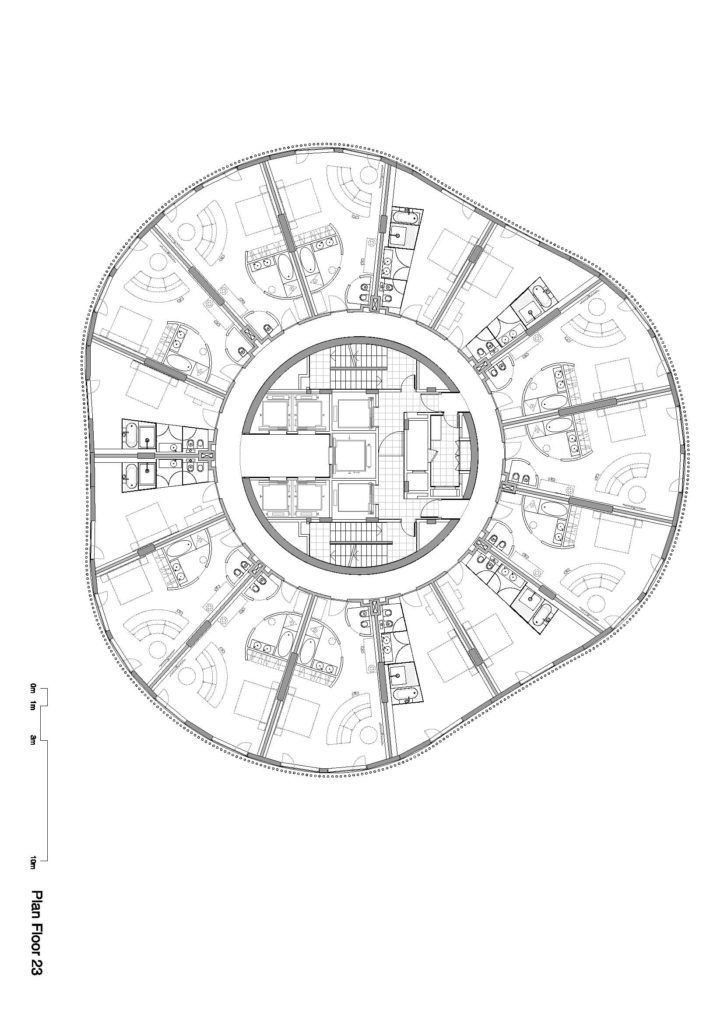 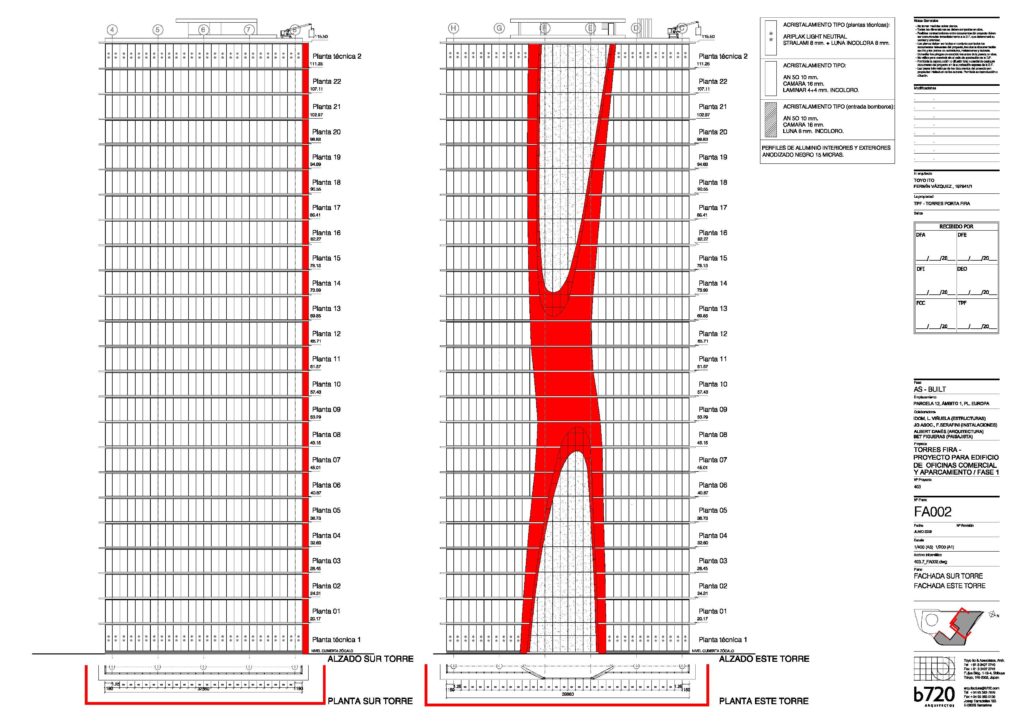 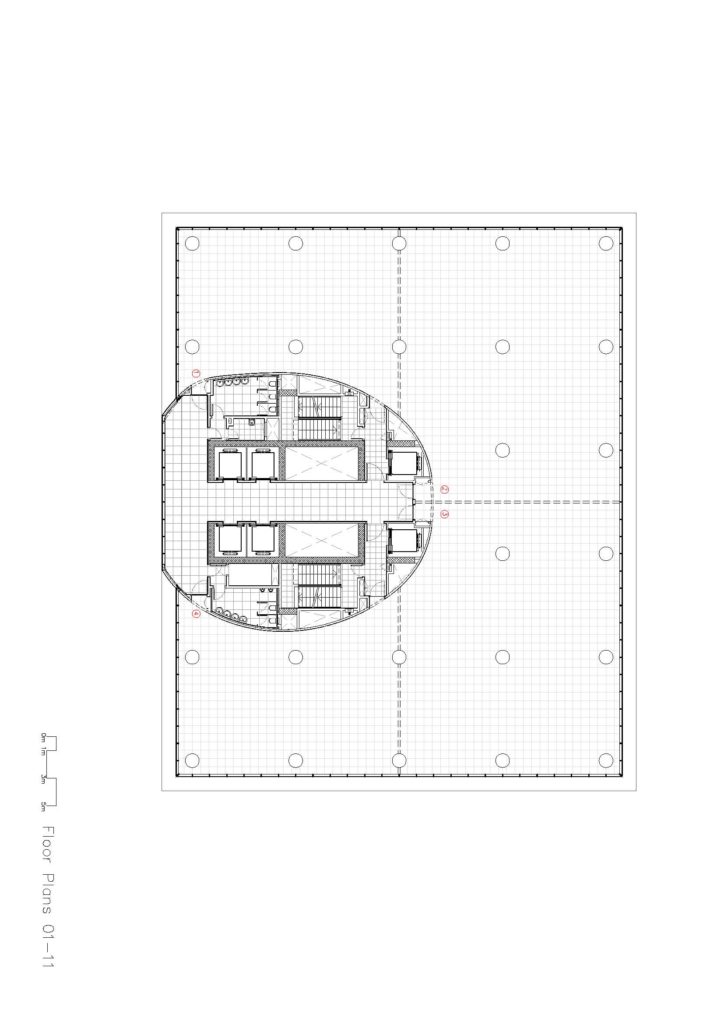 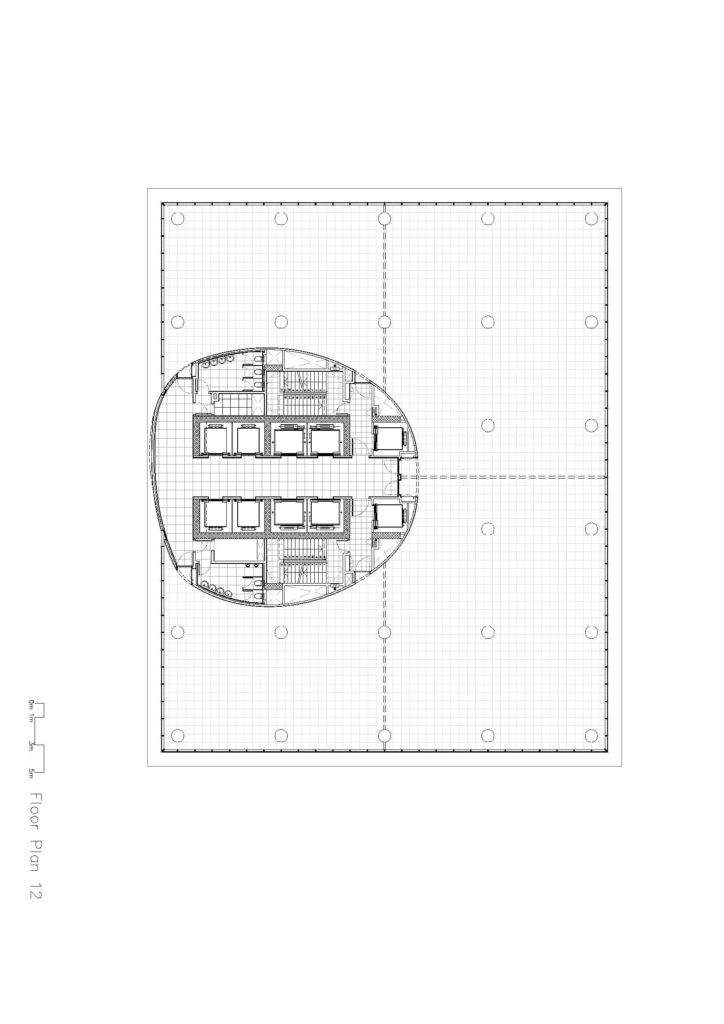 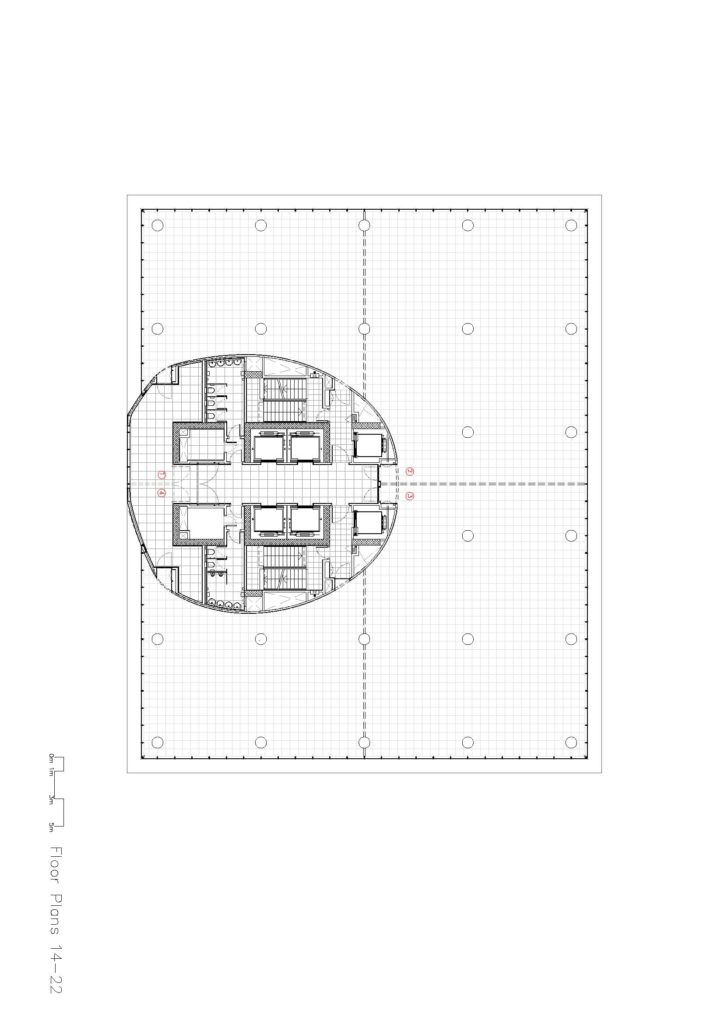 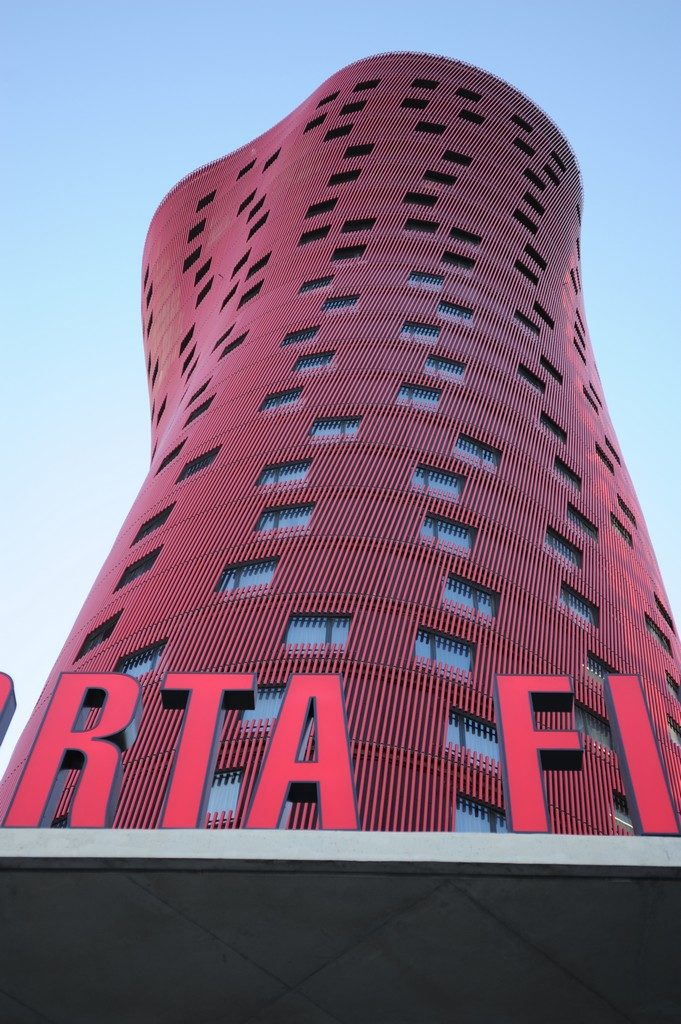 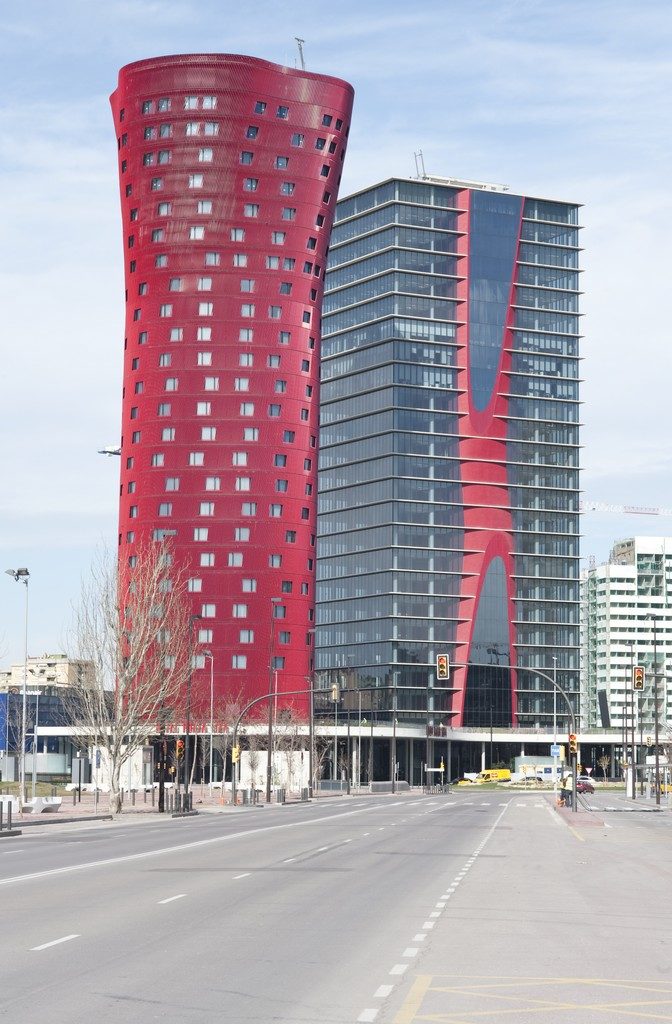 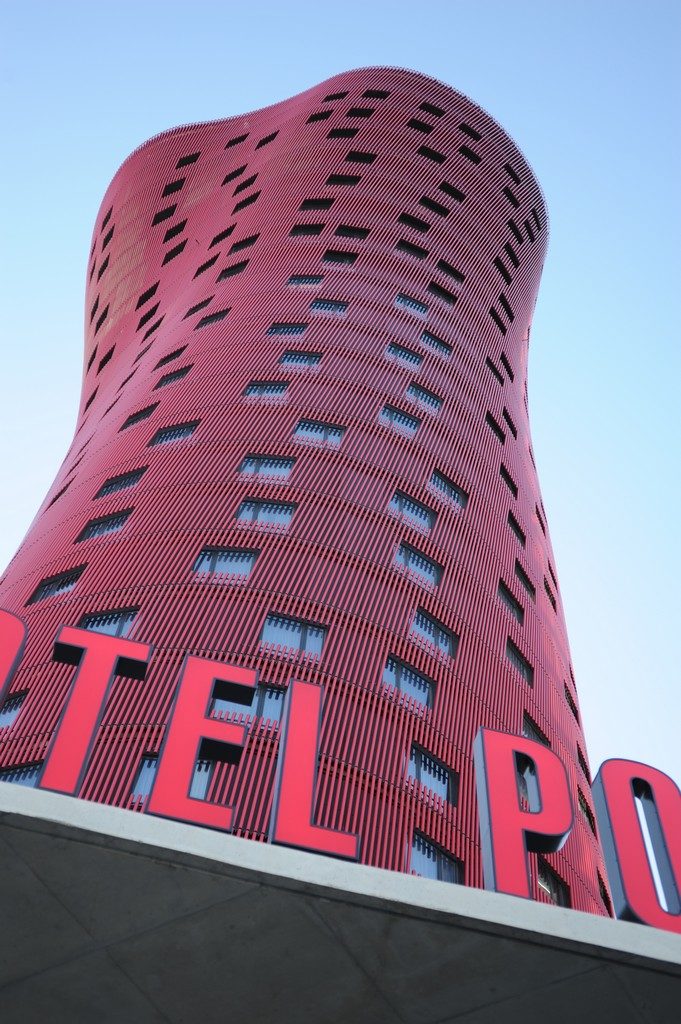 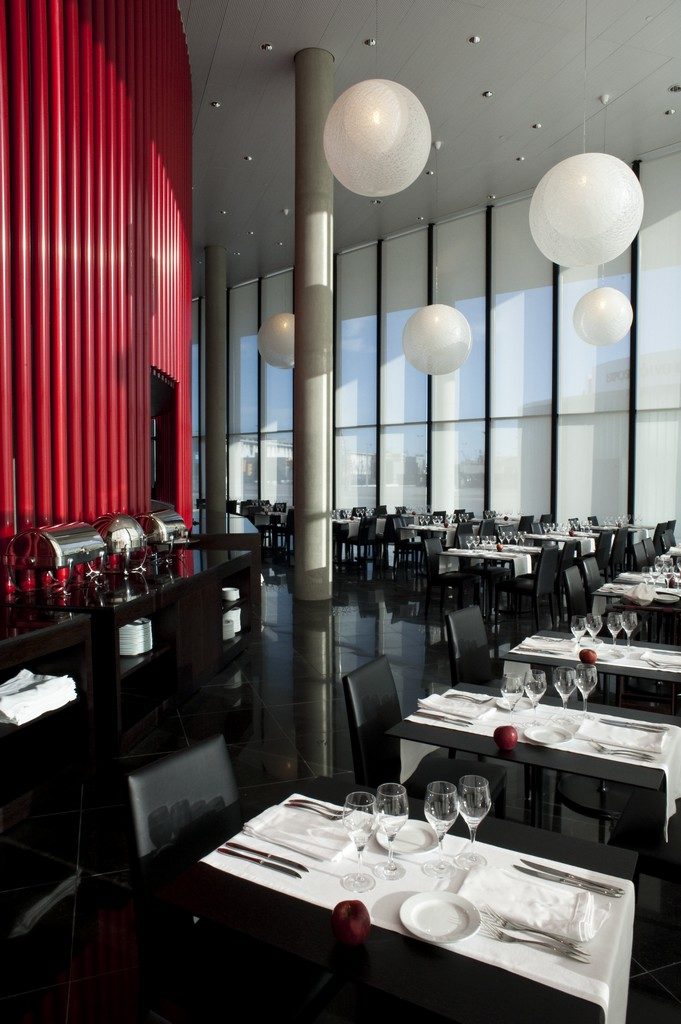 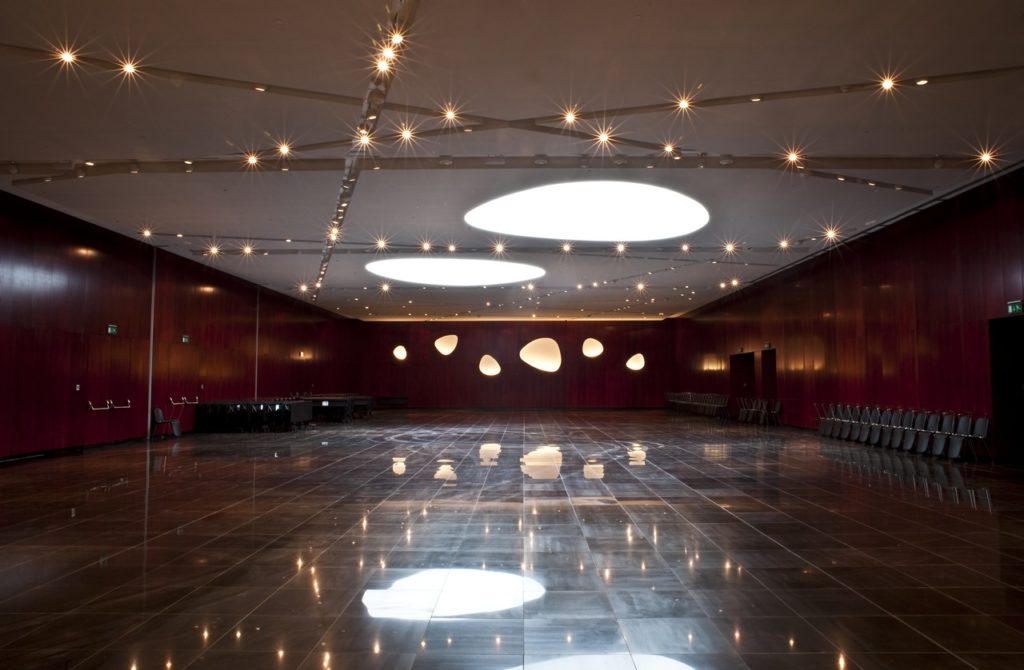 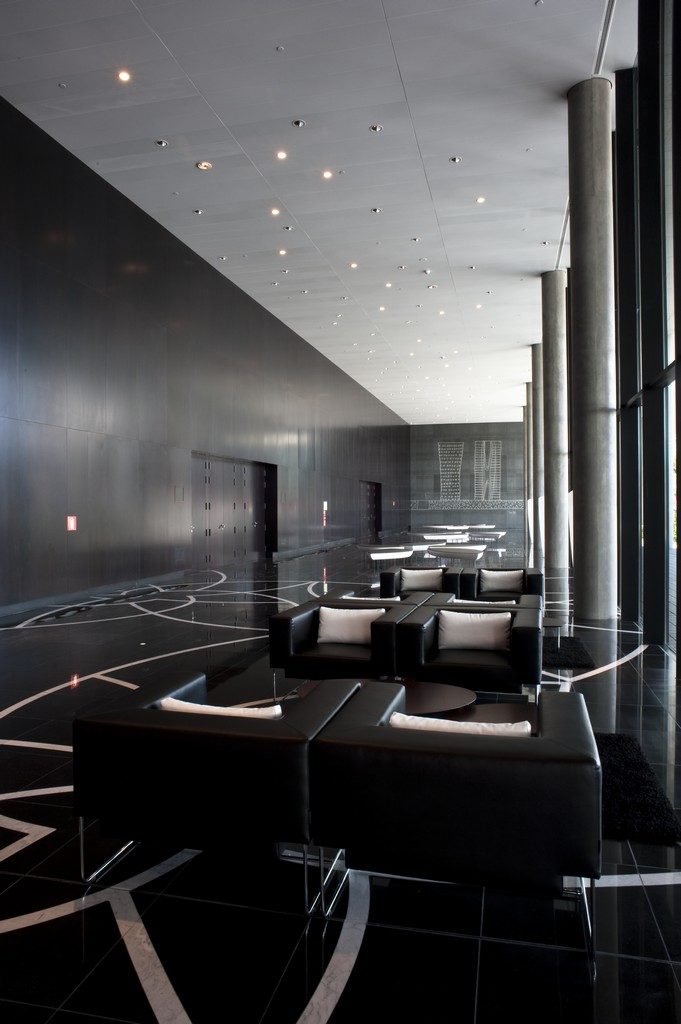 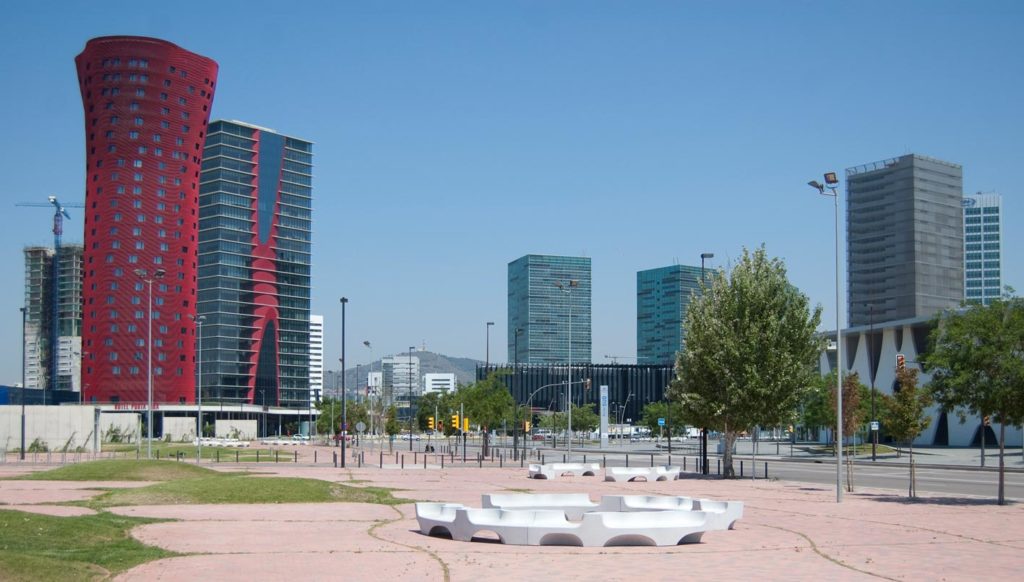 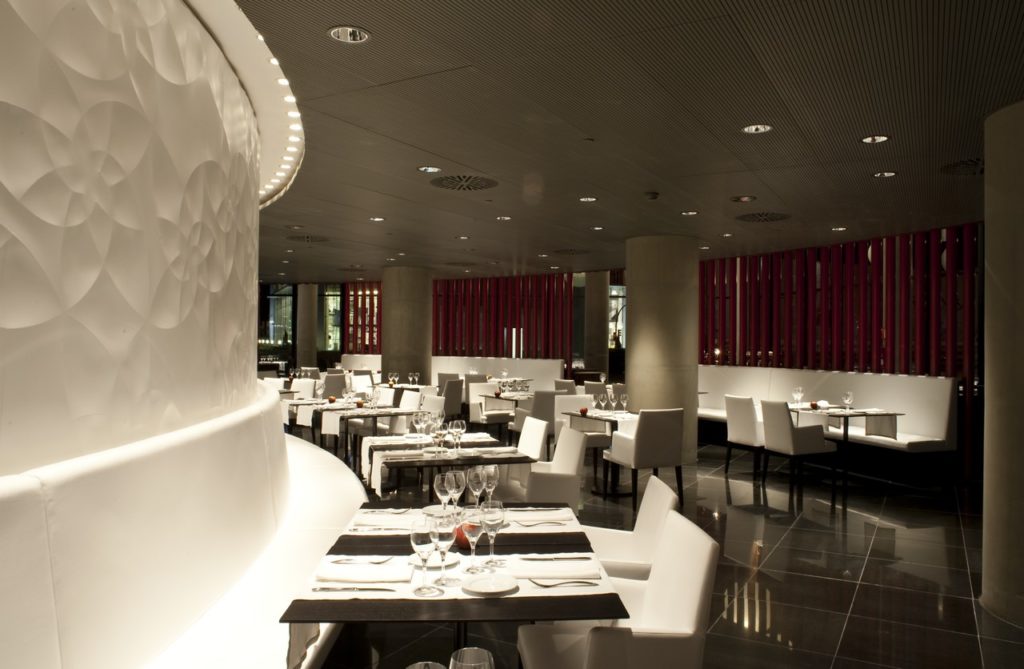 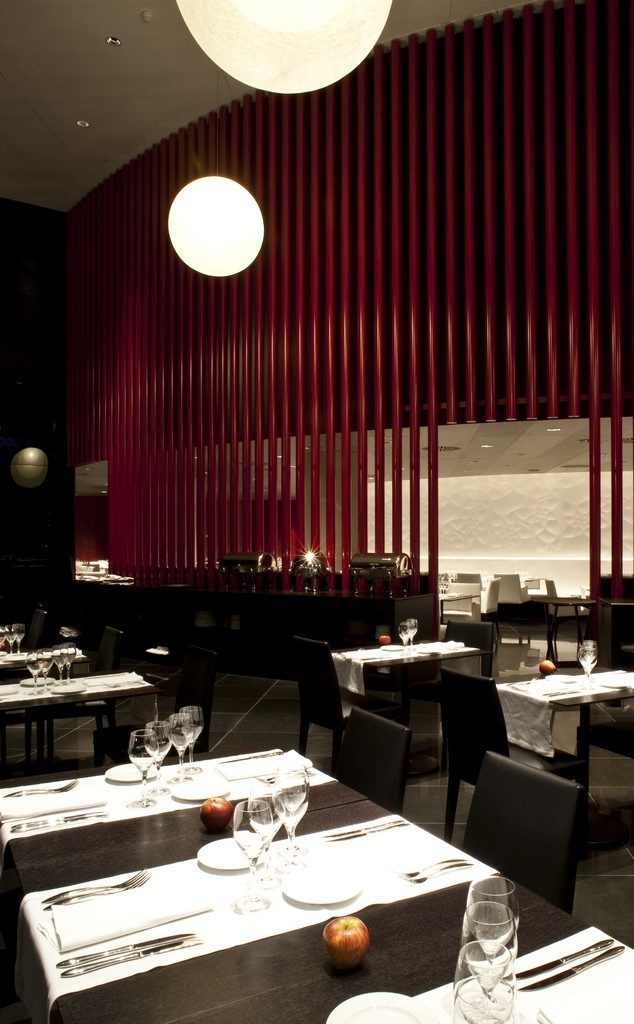 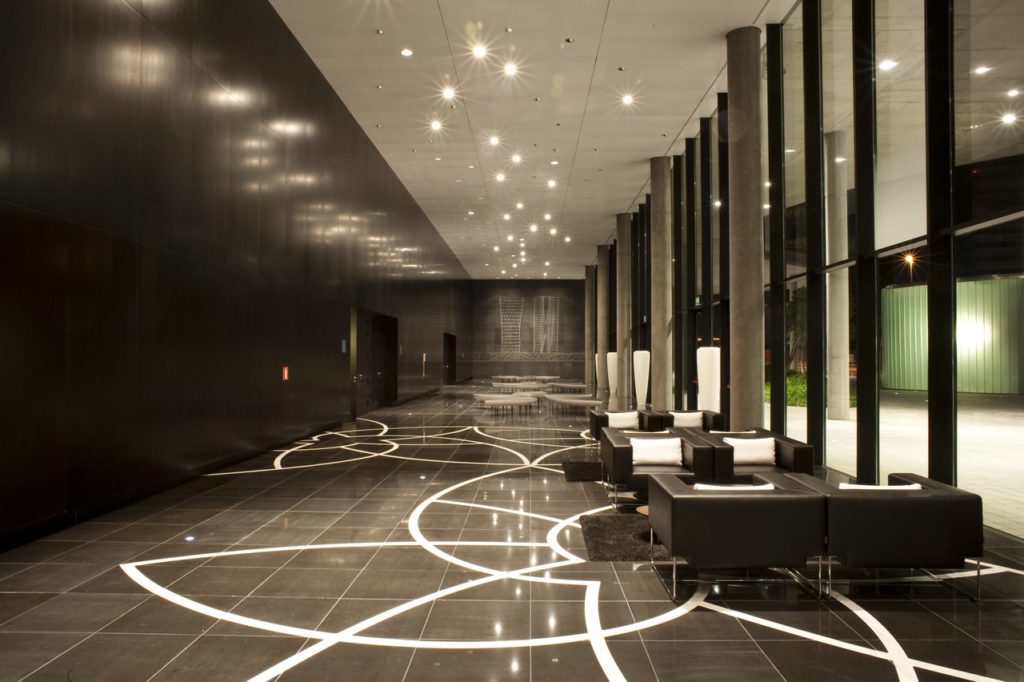