The Technical University of Helsinki, formerly called School of Manufacturing and Manual Arts was founded in 1879 by Duke Nicolas I. He later was named Polytechnic School and finally declared Polytechnic University in 1908, becoming the second university Finland.

In the year of 1948 Alvar Aalto was commissioned to project the Baker House in Massachusetts Institute of Technology in Cambridge; on his return to Finland, the competition was organized to relocate the University of Helsinki in the suburbs, in the neighborhood of Otanieme of the city of Espoo.
The project was presented by Aalto and his wife Aino Aalto who died during the course of the contest. Aalto in 1949 was named the winner and was commissioned to project the Main Building. Its implementation was delayed because Helsinki Olympics would force to give priority to design sports hall that is located on the same campus. After a long period of time, finally the project for the University Main Building would be finalized in 1955. By 1966 its construction was completed and the university was officially moved to the city of Espoo (Otaniemi) where Alvar Aalto would develop three other buildings, which meant one of the biggest orders in his career.

On January 1, 2010, the School of Economics in Helsinki, the Helsinki University of Technology and the University of Art and Design merged to be renamed Aalto University in tribute to the life and work of the architect and the importance of their work both nationally and internationally.

The most visible building of the Campus of the University of Aalto Otaniemi was renovated in 2015. The solutions of the renewal were developed respecting the original architecture and historical architectural values, performing work in cooperation with the Alvar Aalto Foundation and the National Board of Antiquities. The scope of the renewal performed by NRT Architects was approximately 45,000 m2.

The Technical University of Helsinki is located in Otakaari 1 Otaniemi district, in the eastern part of Espoo, Finland.

In 1966 Otaniemi was a center close to the Finnish capital area today virtually central part of the metropolitan area Helsinki. The area is recognized as the cradle of modern technology and Finnish industry, in addition to the Aalto University Campus.

Before the construction of the campus, it was part of the centenary Otaniemi rural landscape of Espoo. The need for technical laboratories and increasing the number of higher education students moving to Helsinki University of Technology necessitated earlier in Hietalahti, as well as investment in infrastructure that would allow such education. The state bought the land of Otaniemi in 1949.

Alvar Aalto began development of the new campus of the Polytechnic University from the Main Building of the University in 1949, however the Olympic Games in Helsinki (1952) is would cross, which forced the architect to design and complete construction of the Pavilion Sports located in the same city and would become the center of the college sports sector. Project buildings have different concepts or generating ideas

Buildings that Alvar Aalto developed for the University of Helsinki are:

Built for the Olympic Games Helsinki in 1952, the building was planned Sport initially as three volumes united by the ends with spaces for meeting room and sauna. Later, due to problems during the work only two were built, staying on top of an Olympic track and spaces for athletics, 3 grass courts for tennis, skating area, two basketball courts and two jogging tracks. On the ground floor a living boxing with changing rooms. In the grandstand area for spectators is an area designed to communicate the different areas of the stadium.

The main building of the Helsinki University of Technology designed by Alvar and Elissa Aalto, was completed in 1964. It dominates the central area of ​​the campus from a small hill.
In the building it highlights the auditorium for more than 1,000 people and has three floors. Half cylinder shaped bevelled, articulates the volumes and rises above the other buildings, the hall of the main entrance is in the socket. The ceiling of the auditorium, which responds to the Chambers continues into the park forming an amphitheater. The building also has other auditoriums into two sections, one seating 576 and the other 327 attendees.

On the third floor, on the north side of the tower, the administrative section with the principal’s office, boardroom, etc. is On the second floor there is a spacious rectangular room and a lobby lounge. On the ground floor a cafeteria for students and teachers is located.

Then there are the classrooms of general studies of first and second year, following an east-west and east of the main entrance, a laboratory illuminated physics rectangular prisms on the roof, an auditorium for 310 listeners and department architecture on the south side, occupying a special place among the hierarchy of the buildings.

The group of buildings that house classrooms have a height of between one and four floors, are arranged around courtyards and connected by an intermediate input.

As part of the comprehensive plan of the university, Aalto was given the task of designing the homes of students, they would be carried out in three phases, but only managed to make one of them where we found about 200 rooms in total, divided two housing blocks: one with five plants (fan-shaped) and the other with three floors (rectangular shaped volume). These are joined through a central volume that serves as a lobby connecting both blocks.

The service building that would contain the boilers and chimneys and the pumping station among others, is a building that has undergone several modifications since its inception; first it started as a simple structure of corrugated sheet, which later would change to concrete reinforced with steel joinery and laminated glass. The building contains different volumes where the machines are displayed inside, revealing the latest technology of the moment. Was screened at par a tower that would have a water tank to supply water.

This building was completed 1969, it is located near the Campus 9 Otaniementie, near the administrative offices. It is the largest and oldest Technical Library Finland. The structure is clearly related to the old main building, in the contours of the facades and materials used. The interior furnishings designed by Aalto and Elin Tornudd are a fixed part of the whole. A large number of shelves, tables, counters and lamps are original.

The building is elongated with oblique walls Aalto used to manage their projects, linking by treating materials to the rest of the set. It is distributed on three floors which are booksellers, having skylights that distribute light from the top to the lower levels. The building also has several offices, seminar rooms and conference room for researchers and photocopy room and sound reproduction.

The red brick buildings of the Campus refer to the old Finnish industrial architecture, illustrating the close relationship of the work done in their buildings with the old industrial activity in the area.

Located in Luolamiehentie 7 was for a time the largest structure of its kind in the country with a span of 45m between wooden beams.

The architect used brick as the primary material in the case of the small room is painted white with the main wooden structure; while the larger the structure is made by armors to support the roof. These armor mullions create a game inside the enclosure which shows the magnificent light treatment on site.

The main materials used for construction are the black granite walls of dark red brick factory, although in different areas giving a treatment to achieve shades of white brick, also found the structure of reinforced concrete and copper. Different wood accents reveal the nature of the work.

This building that articulates the side spaces, functions as stepped outside outdoor theater, an amphitheater facing the open space. Inside predominates concrete construction with zenithal windows that allow natural light and accompany the rows of windows following the hemicycles the outdoor amphitheater maintain an ascending order.

Corrugated sheet gave way to the reinforced concrete structure and brick walls to contain the boilers, as well as the construction of the tower made of concrete elevated tank.

The materials used are gray granite base, red brick, and copper foil to blend with the whole. Motifs also uses wood and steel extrusions. This does not have the traditional ventilation system Aalto used in buildings. 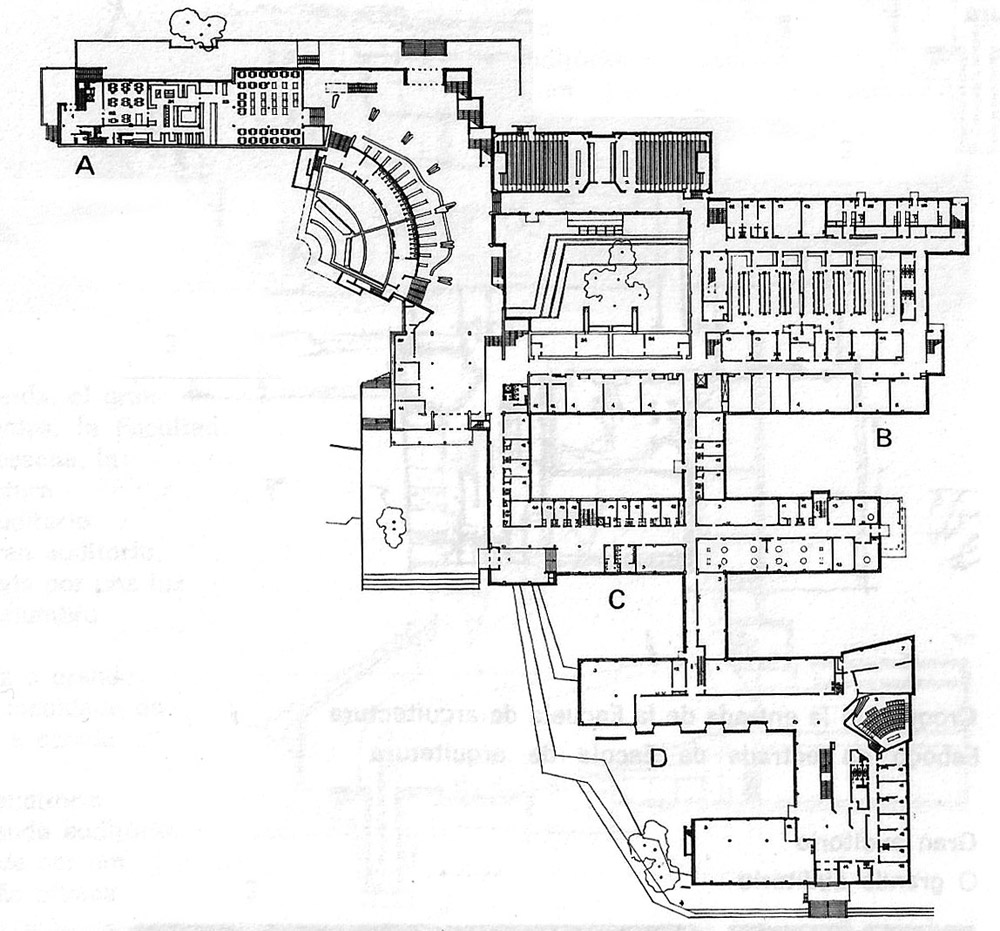 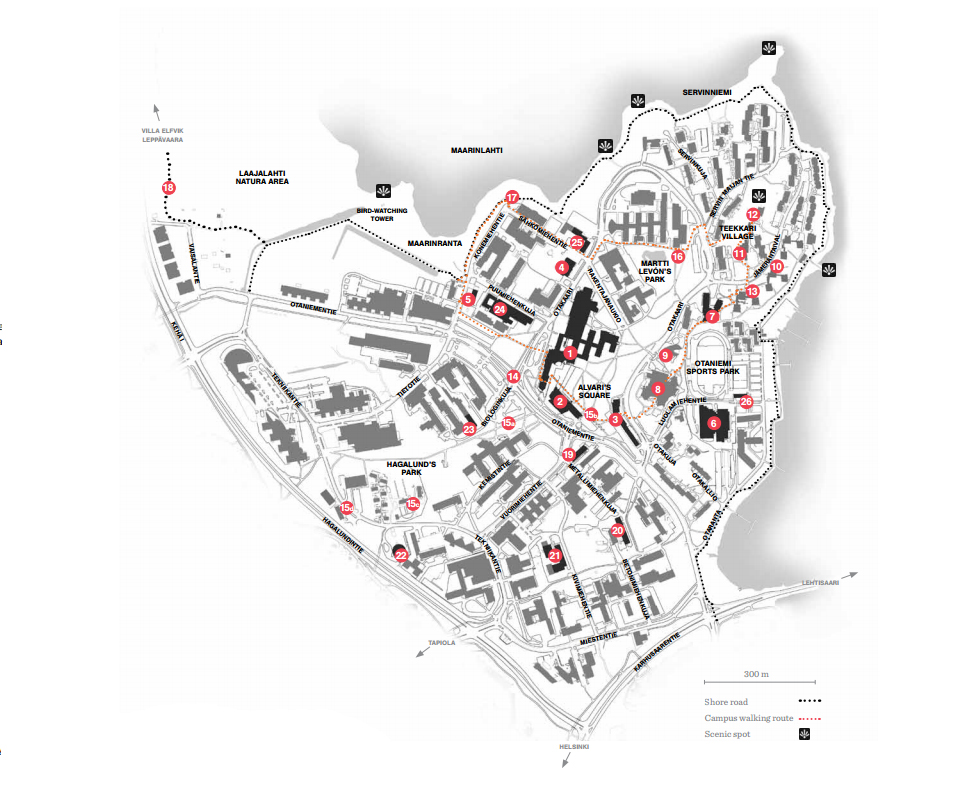 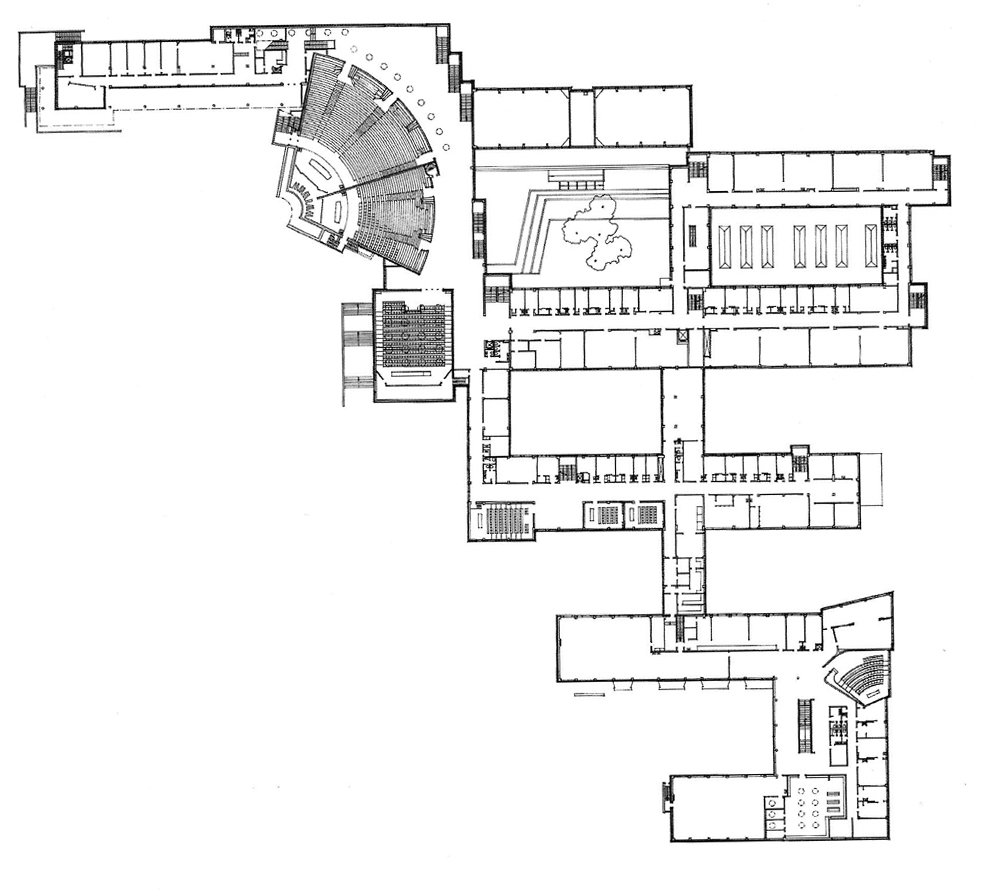 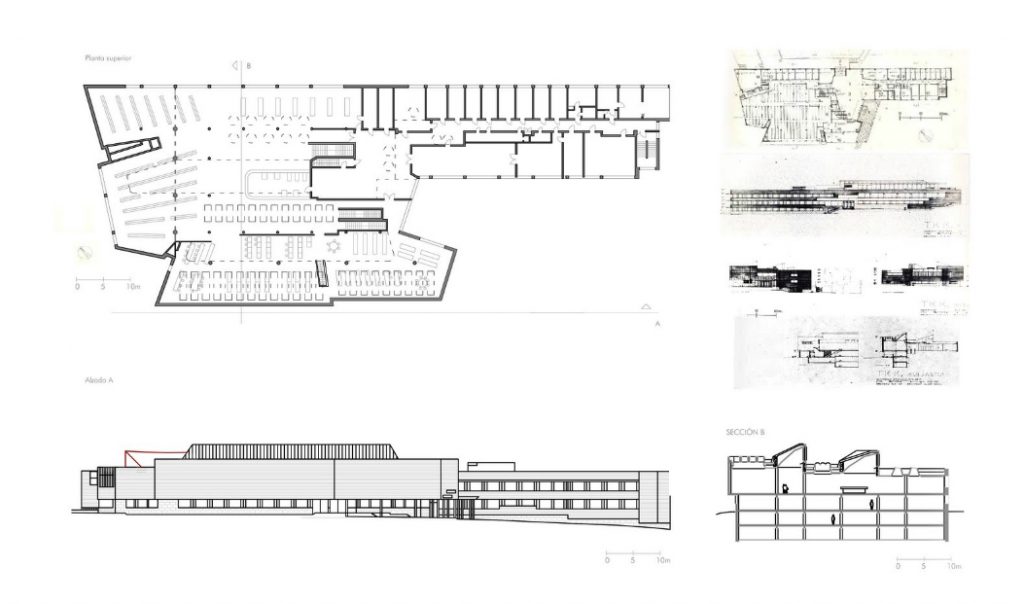 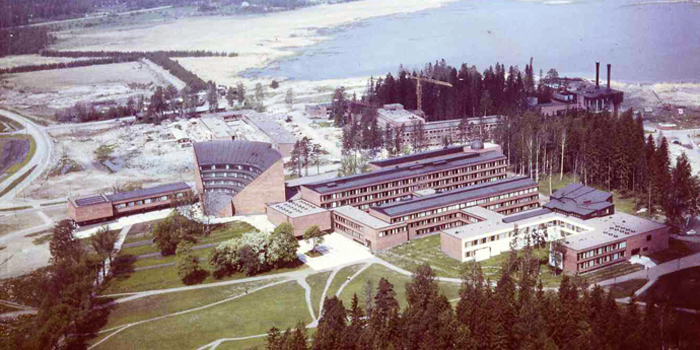 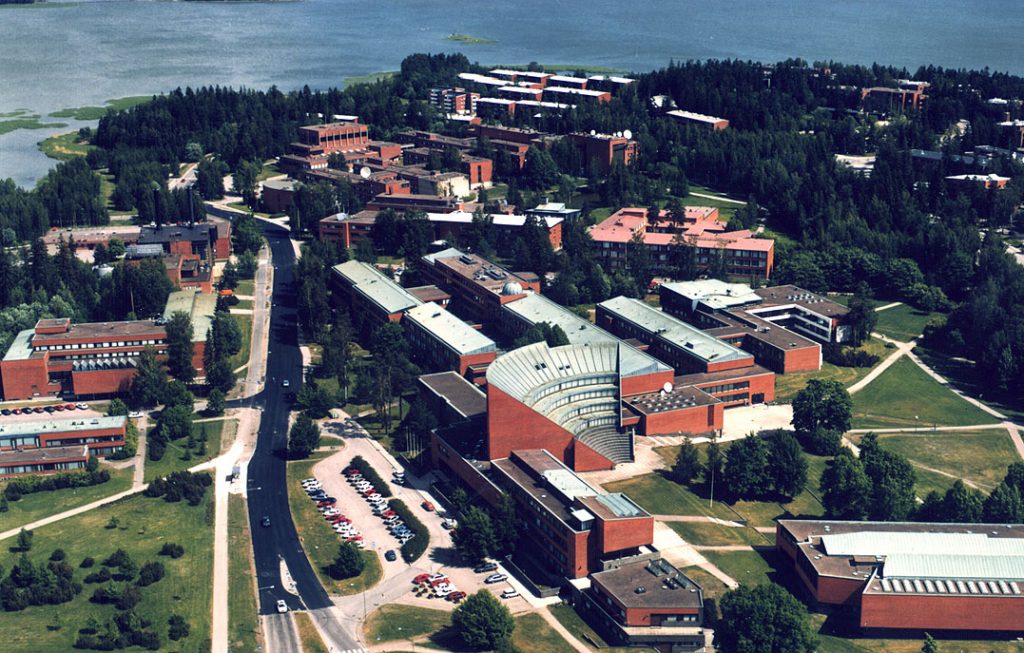 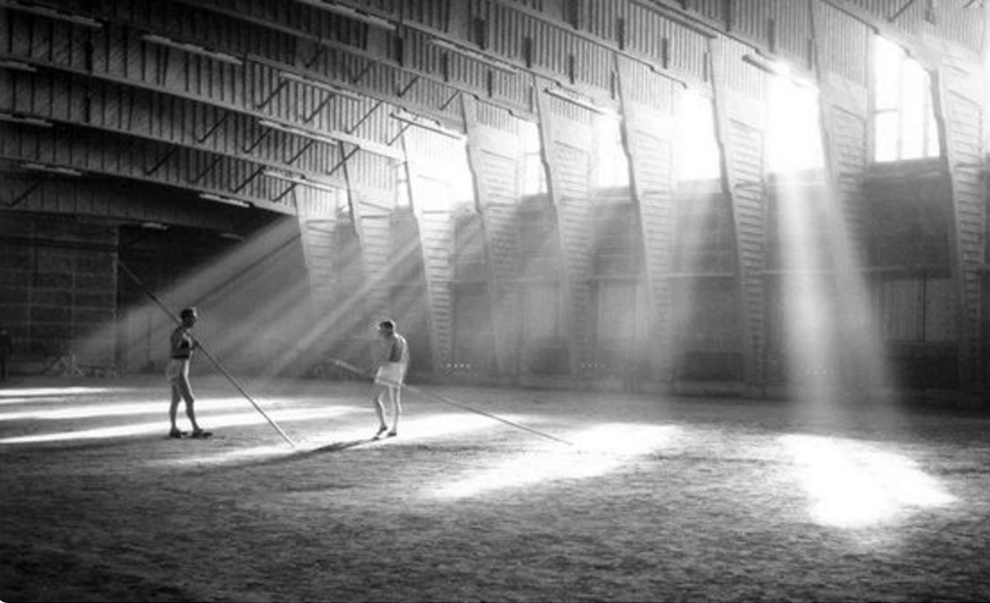 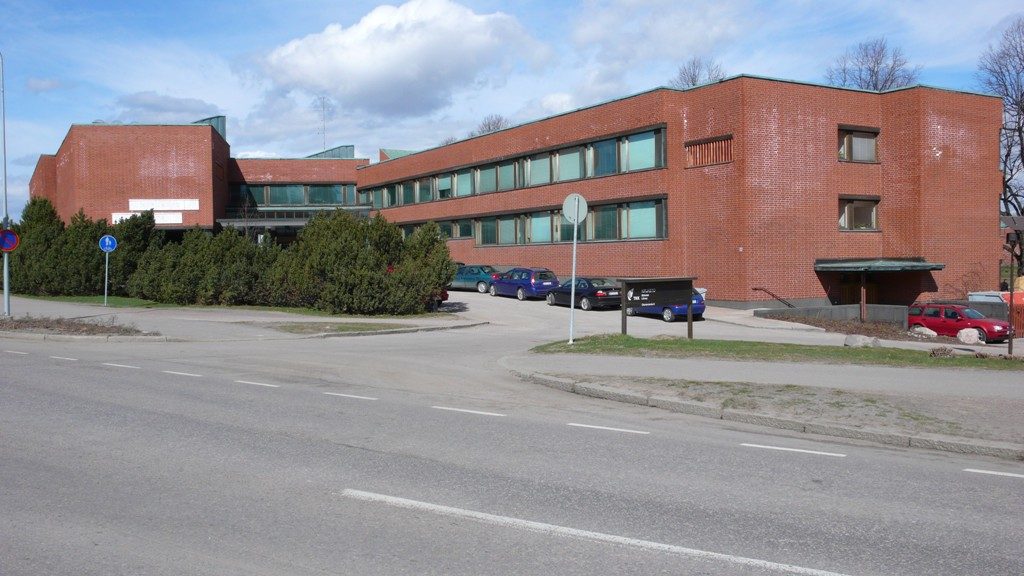 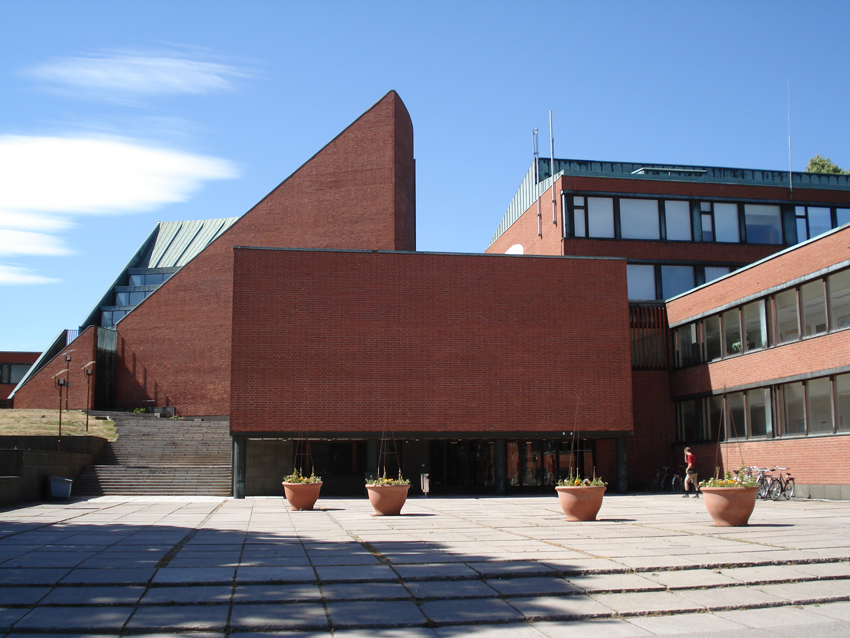 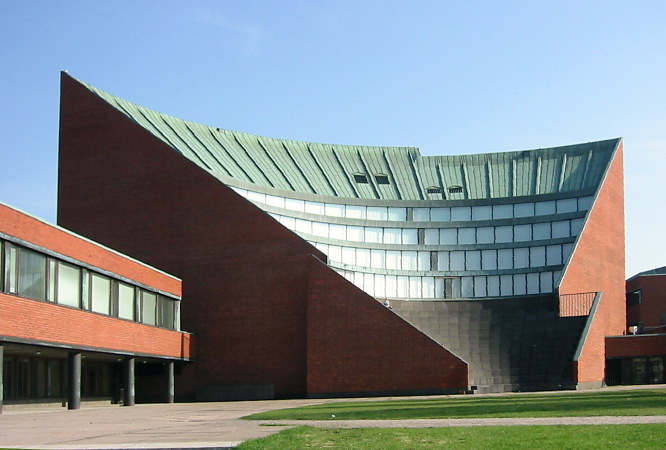 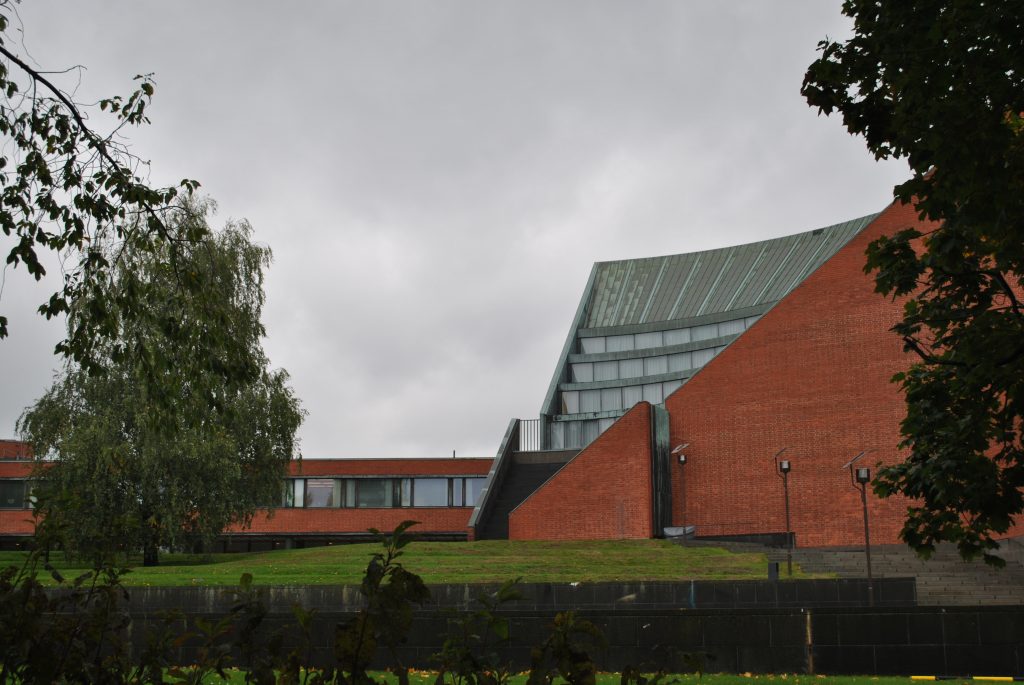 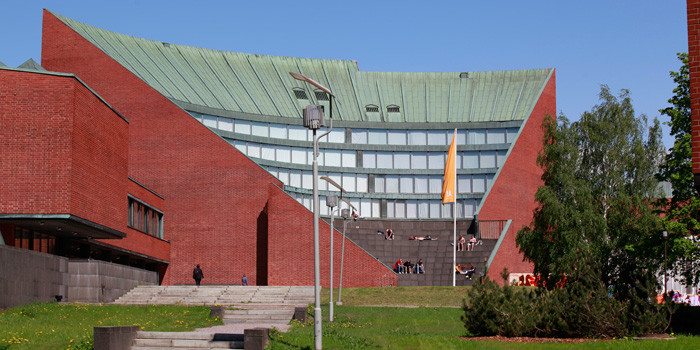 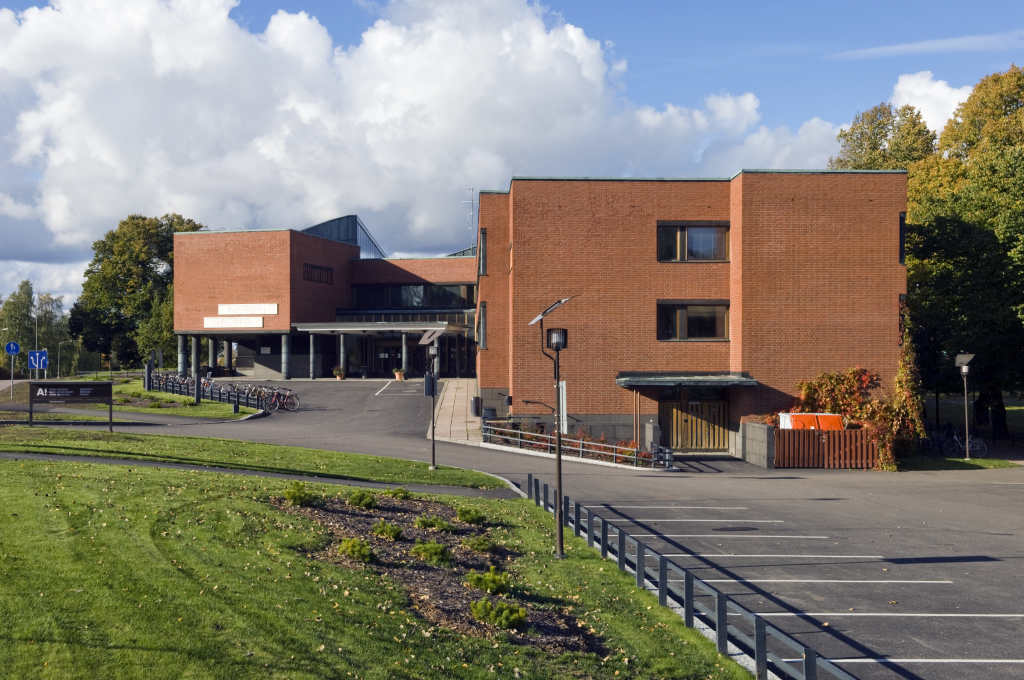 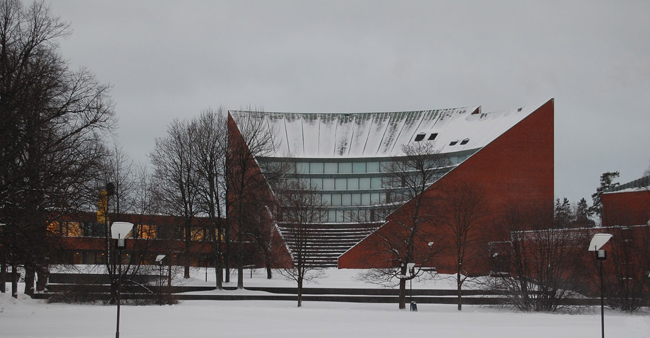