Pole House (House in the Pole) in Fairhaven was built by architect Frank Dixon and quickly became a reference point, an attraction by the hand of man, a watchman concrete guard the east gate of the Great Ocean Road.

The house was designed by the architect as a holiday home for his family in the 70s, a time before computers and bypass roads, when the coast was a rumor, and became a totem in a faraway place. A local landmark known to several generations of motorists and tourists as “the house on a pole.” This modest house with hipped roof rose above the cliffs and shrubs on a stem impossibly thin concrete. The project was conceived in the mid-1960s but not fully documented until 1970, with the construction, most carried out by Dixon himself, continuing until 1978. Dixon, who died on October 30, 2013 at the age ninety years, he lived long enough to see its iconic beach house turned into a cult building and be nominated, albeit unsuccessfully, for inclusion in the Victorian Heritage Register of Australia. The new Pole House after rehabilitation by F2 Architecture from 2013 to 2014 is available for holiday rental.

The house designed by Dixon is located in Great Ocean Road, Fairhaven Beach, popular destination for surfers, about 126km from Melbourne, Victoria, Australia.
The land is smaller, peripheral a presence, but from the height reached the Pole spaces House, 40m above sea level, you can study the landscape, 50km of coastline along all day. Split from the lighthouse at Aireys Inlet Great Ocean Road rises like a roller coaster hills through the woods of The Otways beyond Lorne. Fairhaven area was badly damaged in forest fires on Ash Wednesday 1983

The particular architectural features of the house passed into the background, the house is defined by a seductive role is to ensure that the sea and sky appear to be inside the rooms. The atmosphere of the house is determined by the state of the natural elements, subject to a constant parade of light changes, shadows, clouds, waves and color.
Its location and height on a pole, but in this case higher, the House Pole not stop vague similarity to the Malin House “Chemosphere” built between 1960-1961 by architect John Lautner in California.

The house has been redesigned by Franco Fiorentini F2 Architecture who became a brilliant new statue on a pedestal and famous. The first feeling you get in the Pole House is a giddy excitement caused by altitude and distance. Apprehension and fear mingle as the house sways gently.
F2 architects replaced the original structure for a house of similar size coated steel on the same platform.
“… The Pole House is theatrical in both form and location. As the name implies “Casa Poste” is supported by a huge concrete pole that allows the house enjoy a 360 degree unobstructed views of the Southern Ocean… “. A house that seems to “float” in space, accessed through a long narrow bridge. “It’s similar to the arrival to your hotel room. This is what it feels like early…” says (Frank Marioli, co-director of F2 Architecture)

The bridge leads to a relatively modest house size, the size of a spacious one bedroom. “The views have not changed,” says Mariloi, noting the stunning 180 degree views of the ocean. The design is characterized by a coated wooden central capsule containing the bathroom. There is also a galley kitchen and a stylish living room.

The restoration has indoor construction with retractable glass walls from floor to ceiling. The bathroom and steel pole hide behind a wall covered with warm burned wood ash. Outside, the catwalk has also been transformed with glass balustrades, giving visitors the sensation of walking on air.

The deceptively simple square plan of this house supports the dramatic experience it offers. The two walls facing the slopes are solid, providing privacy and a sense of detachment from the earth, the only connection is the narrow entrance bridge. The two walls facing the sea are glass. The result is a living space on the top, on the landscape, referring only the vast ocean, the horizon and the ways of the distant land.

Throughout the house it has been placed Architectural Window Systems (AWS) ThermalHEART ™ framed aluminum windows and doors to ensure that the project meets the required energy requirements. Due to the large areas of glazing of this house, a system that guarantees the protection of the extremely cold temperatures of winter and the heat of the sun through the house all summer is required. It has placed a double glazed low emissivity. All doors are fully retractable to a perfect view of the sea.

The house is an architectural flare verve, built on top of a pole 15m high. The taps are concealed lights in their mouths that accompany the fall of the water and the light side of a diode that indicates whether the water is cold turning blue, with increasing temperature becomes bright red stood.

Reclining sofas extend pressing a button, the blinds covering two entire walls rise by another button, to bring out to the light switches these shine.

The main rooms, around a central basin, are paneled whose boards are coated with a mixture of burned ash. Facing the huge window that extends from the ceiling to the floor a suspended ceiling fireplace is located, the soil is dark stone.

The original structure of the house, located on a concrete pole at 15m height 5 meters is buried in the dunes and a set of 9 steel spikes anchored at a depth of 7.92m to help maintain its verticality, is a quadrilateral of 8x8m, on which a wooden structure stood.
At the core of the house, made of masonry, a bathroom, a shower and a toilet prepared, all the rest of the construction is the space that unfolds around this core, with a 360. The structure is connected firmly via a cantilever gateway earth 21m long and is completely surrounded by a gateway. 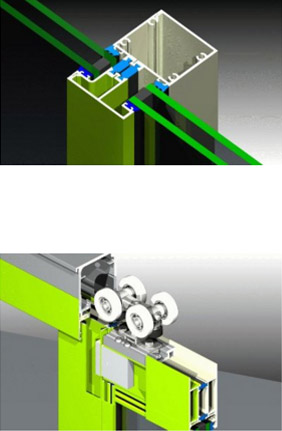 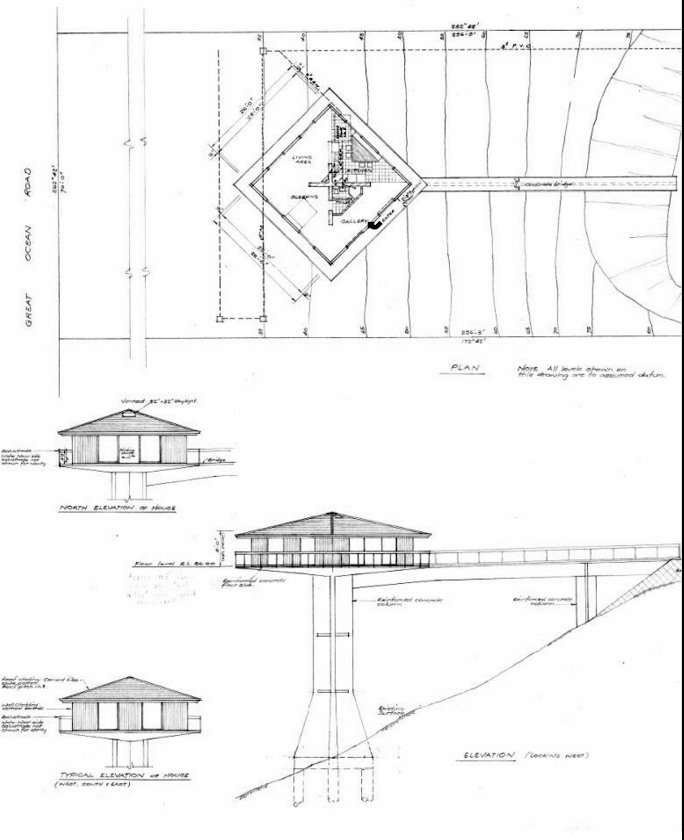 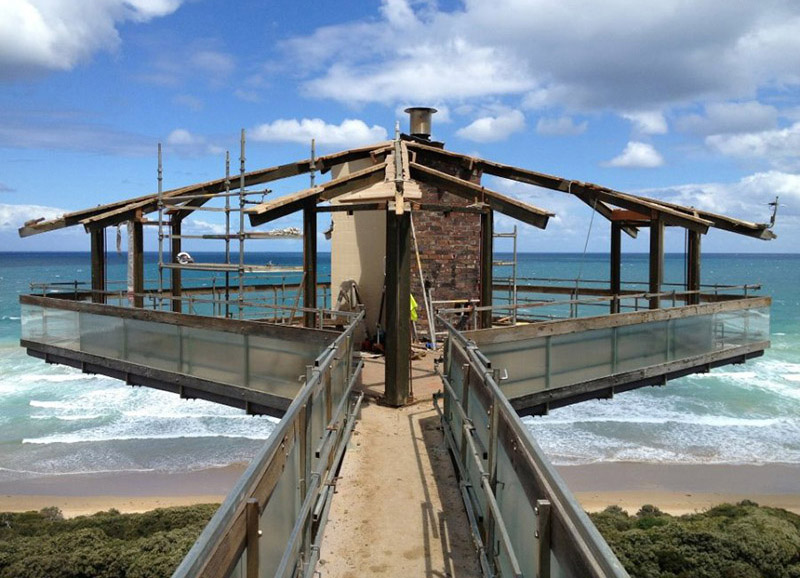 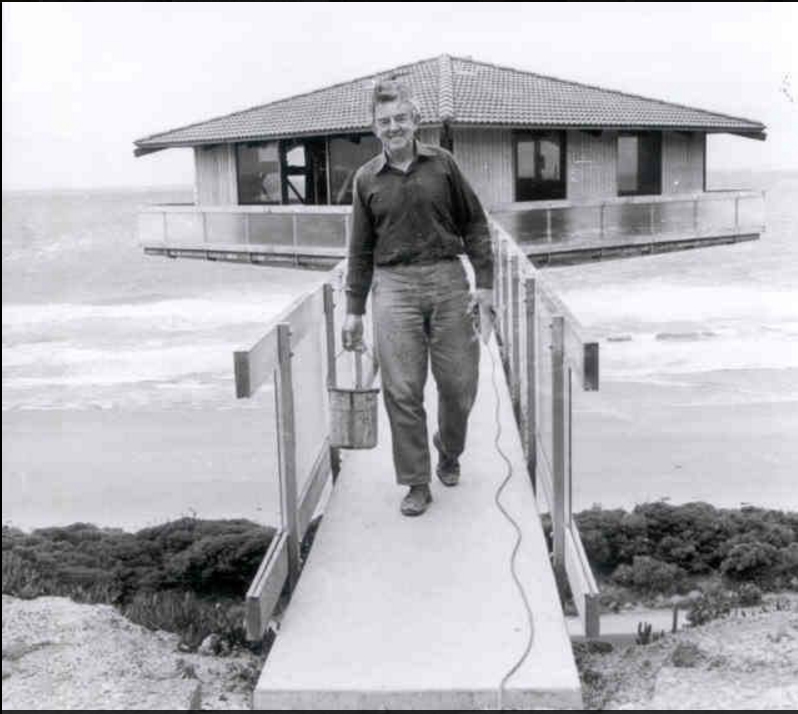 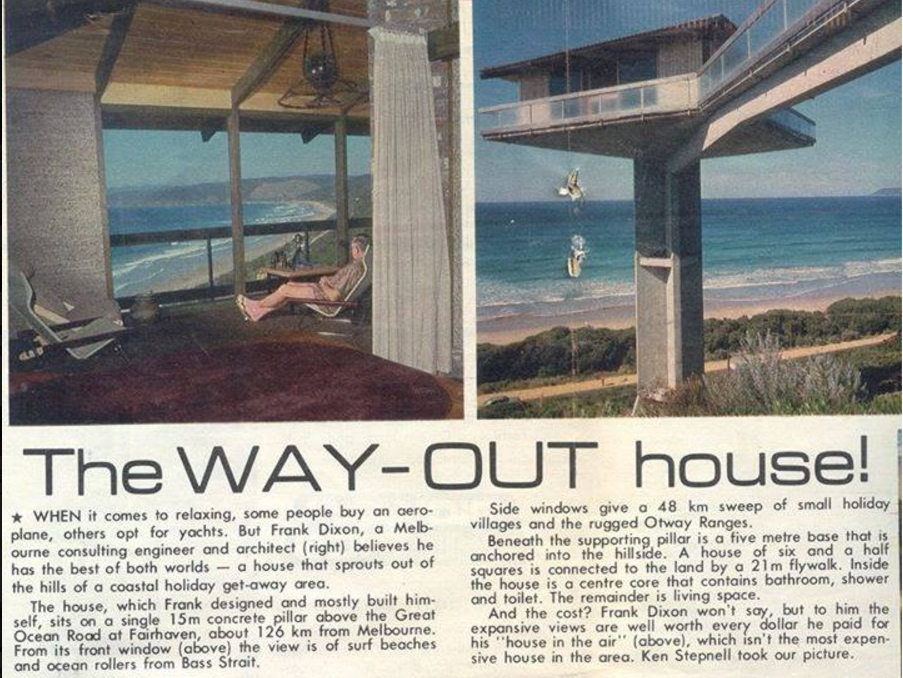 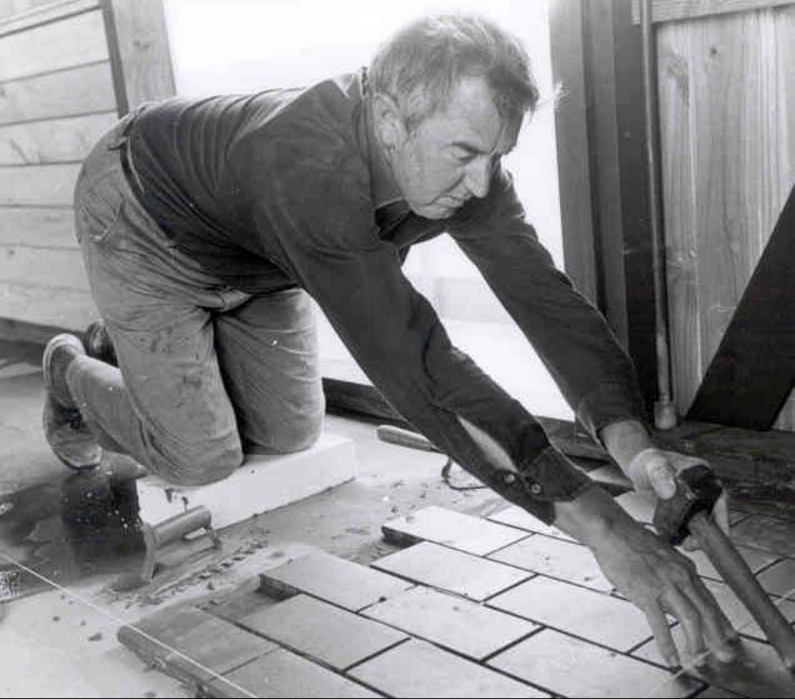 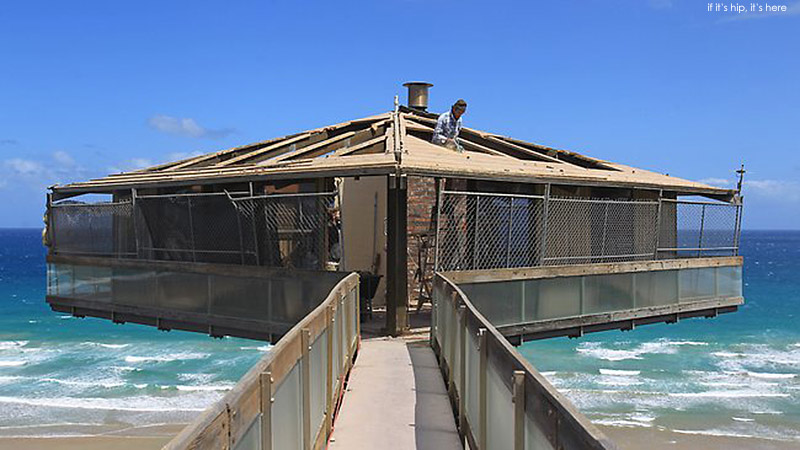 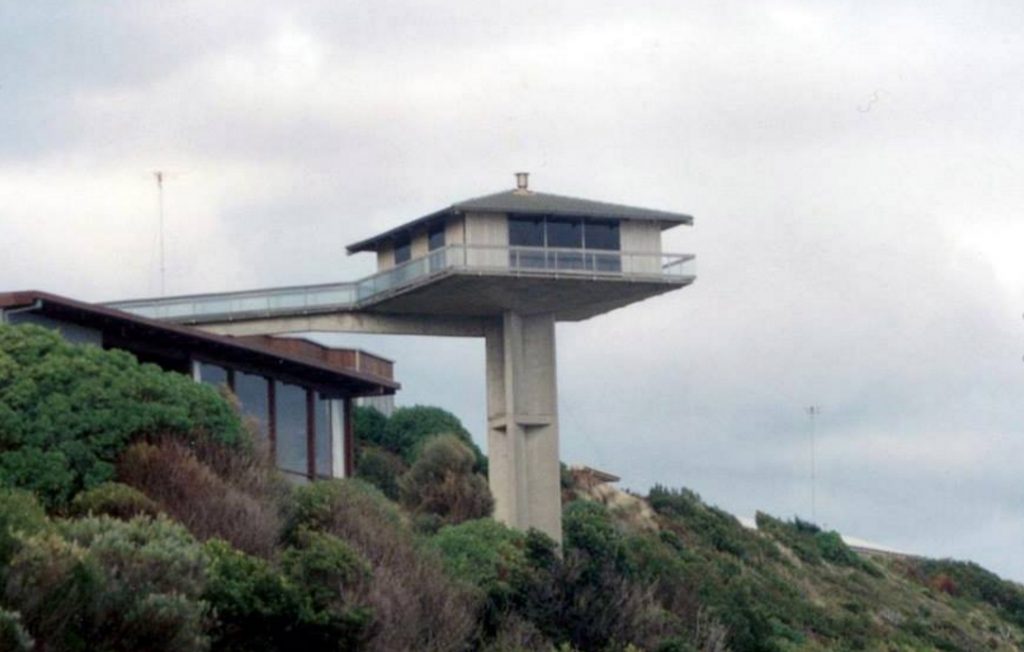 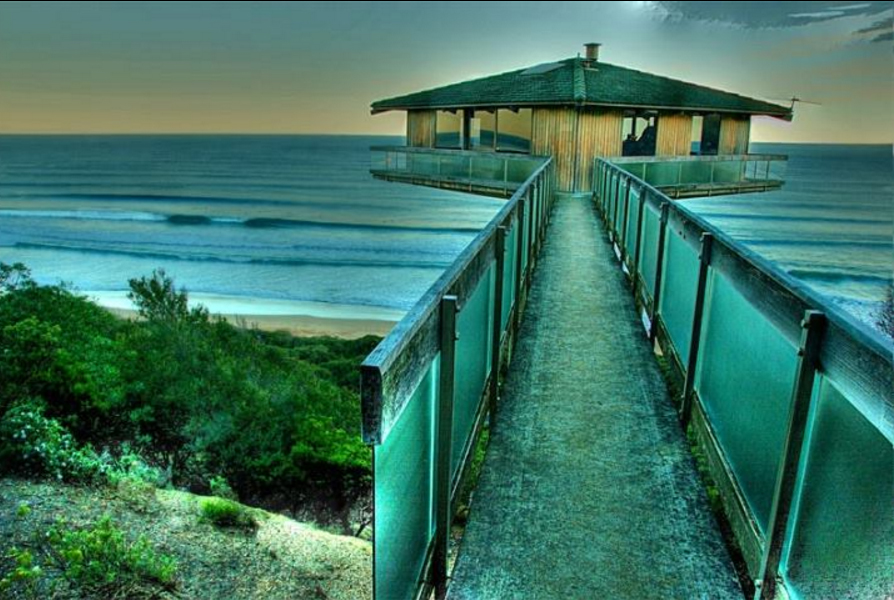 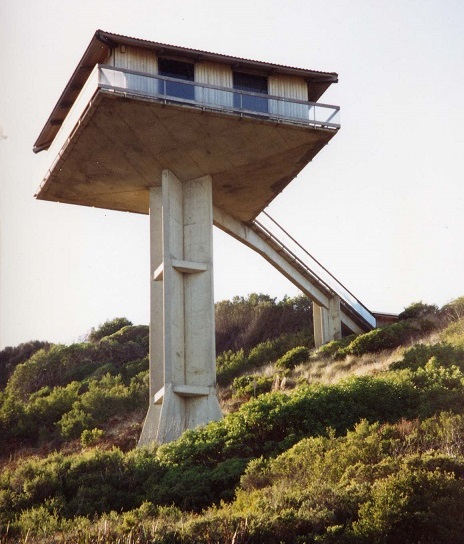 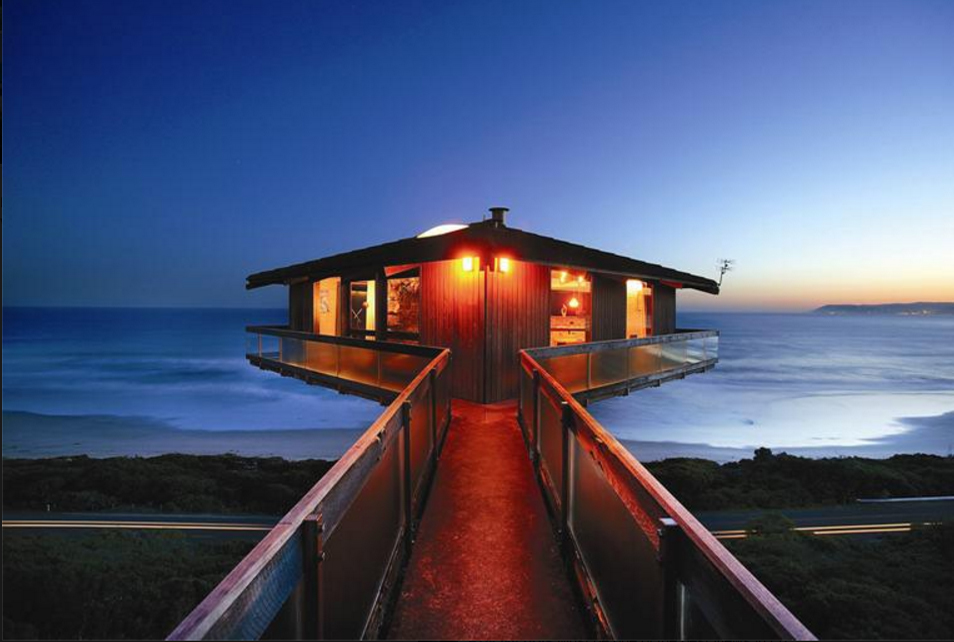 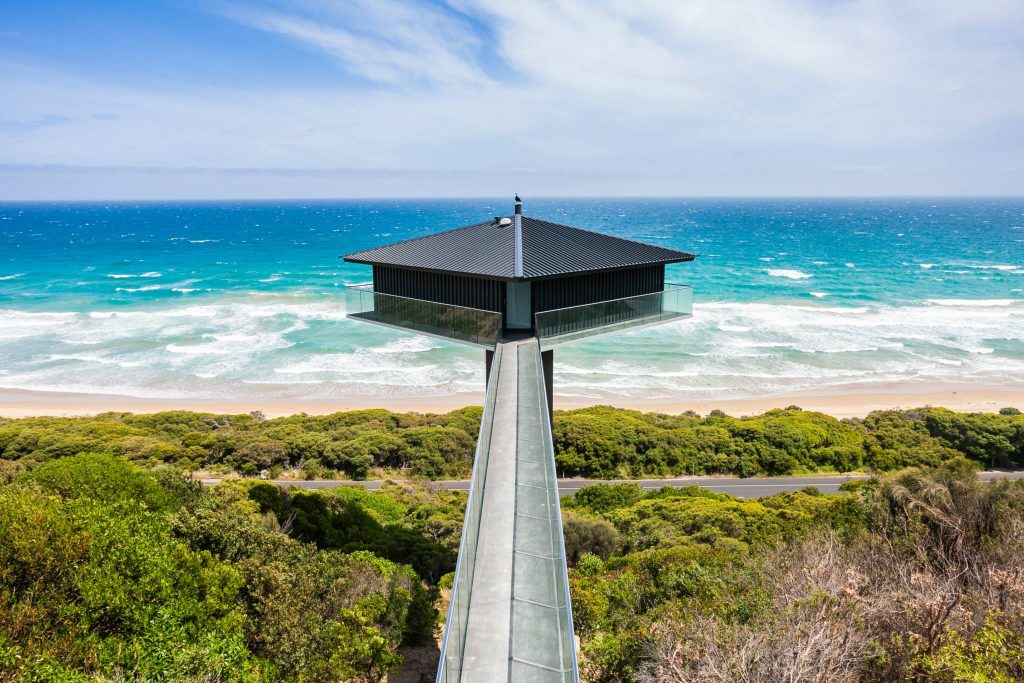 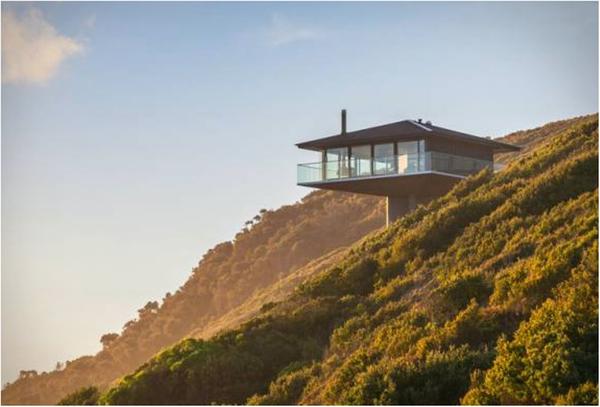 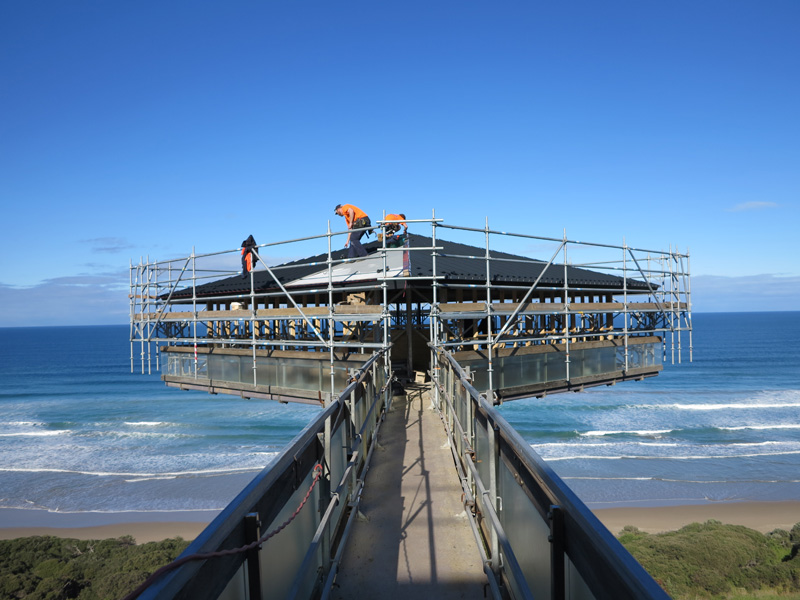 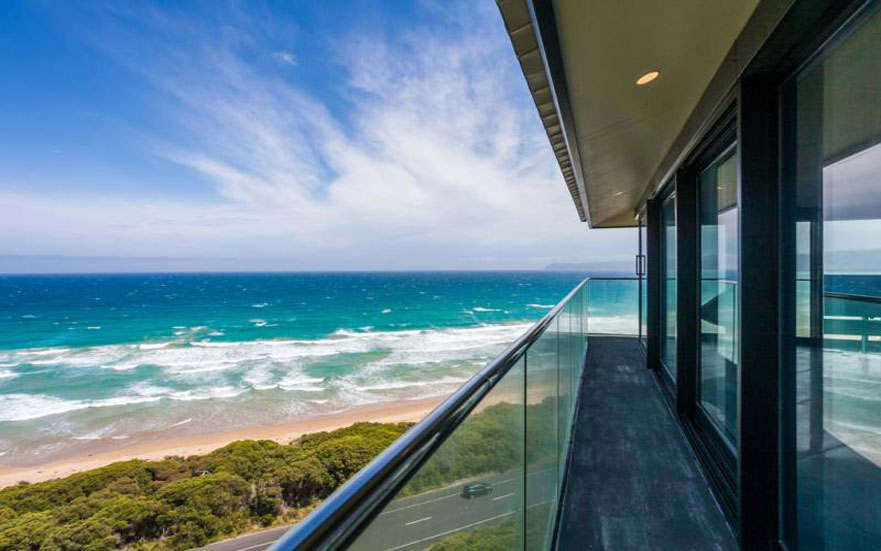 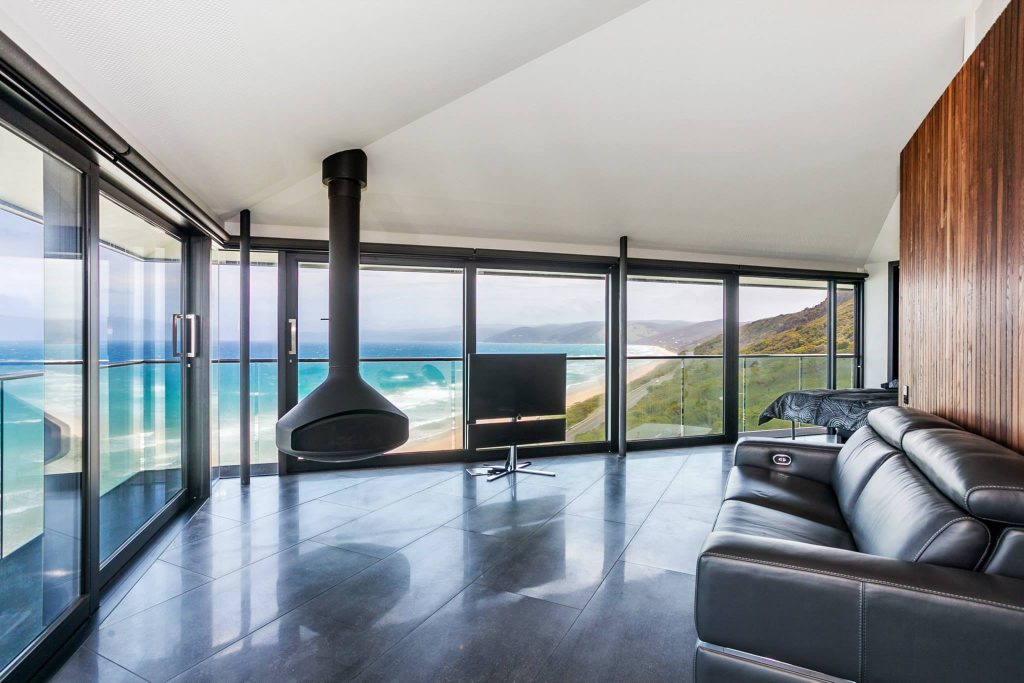 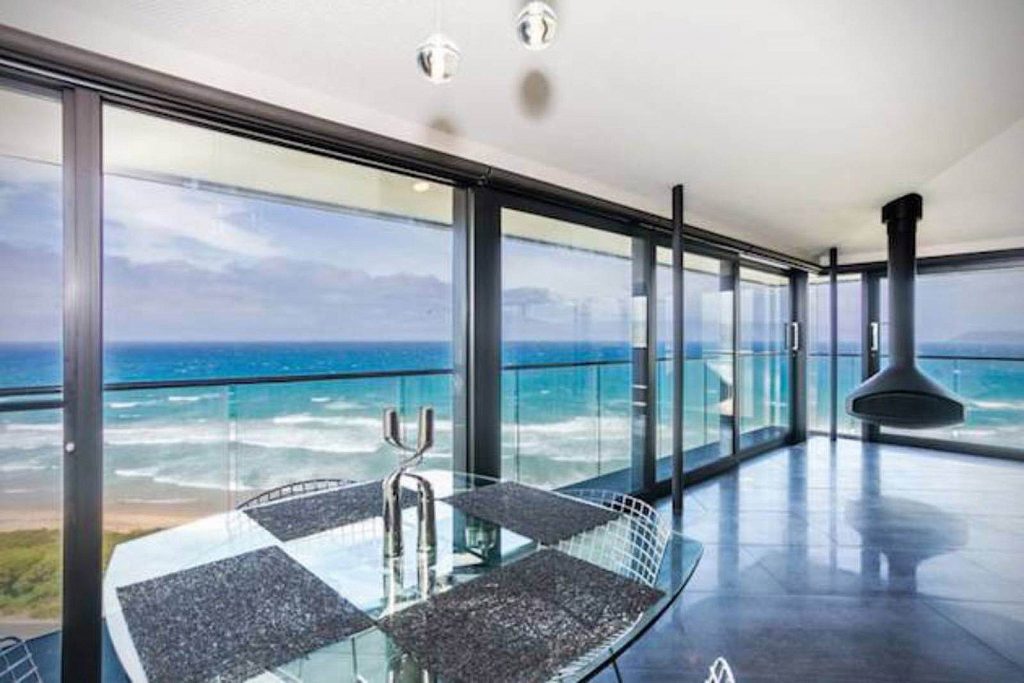 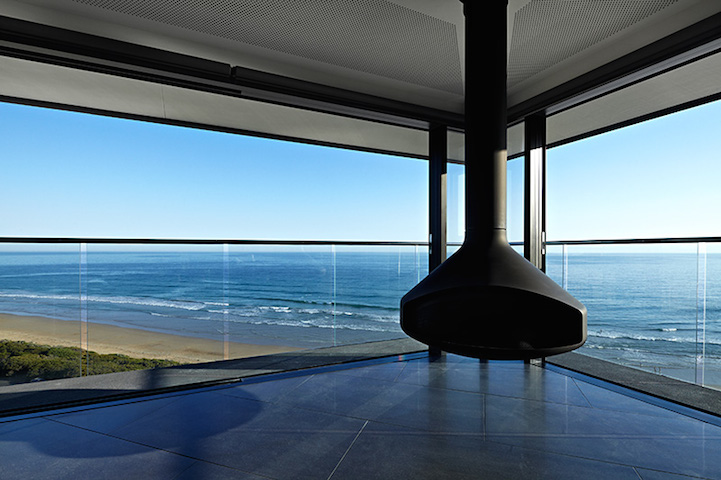 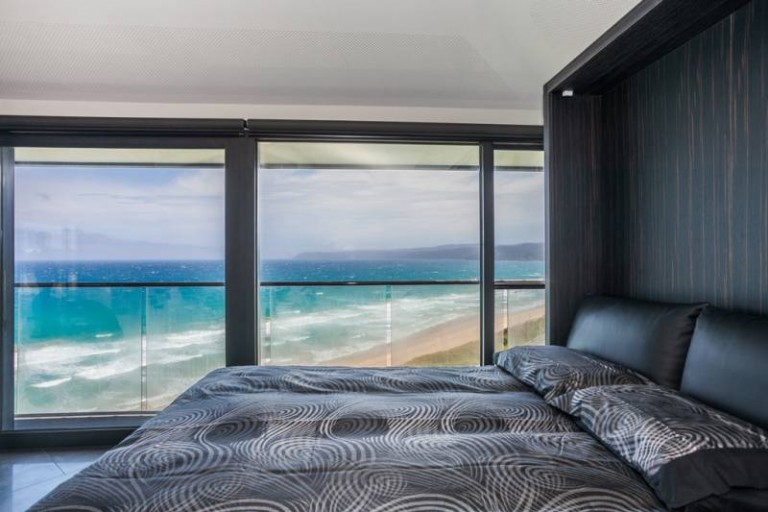 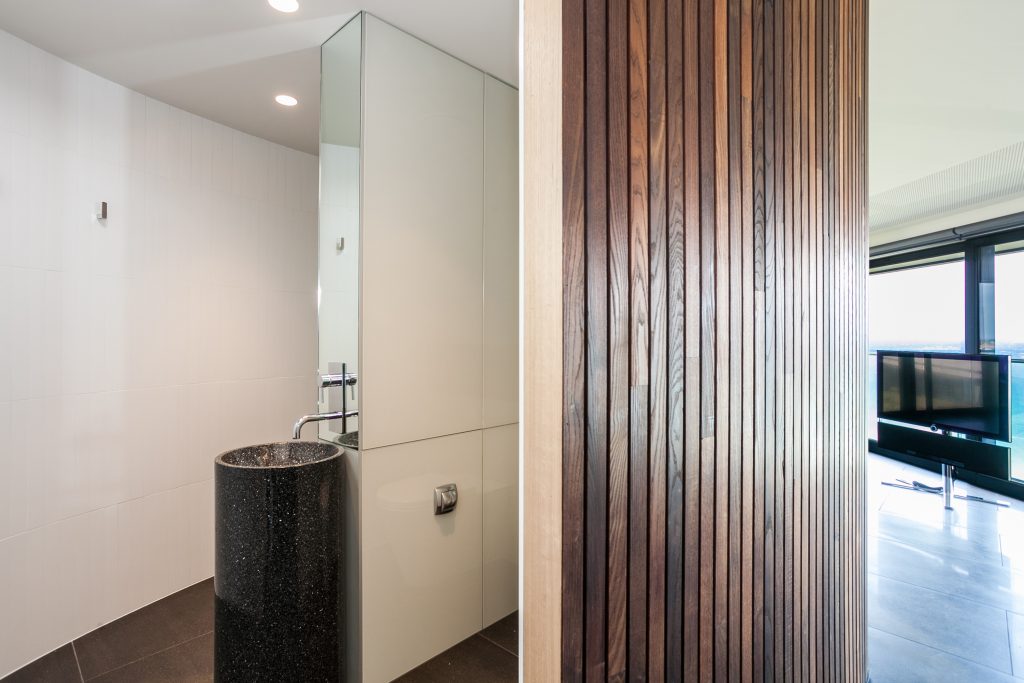 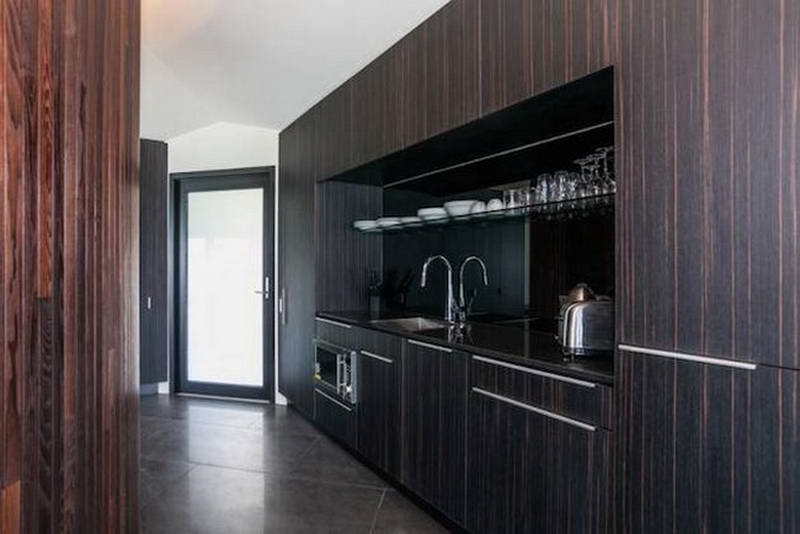 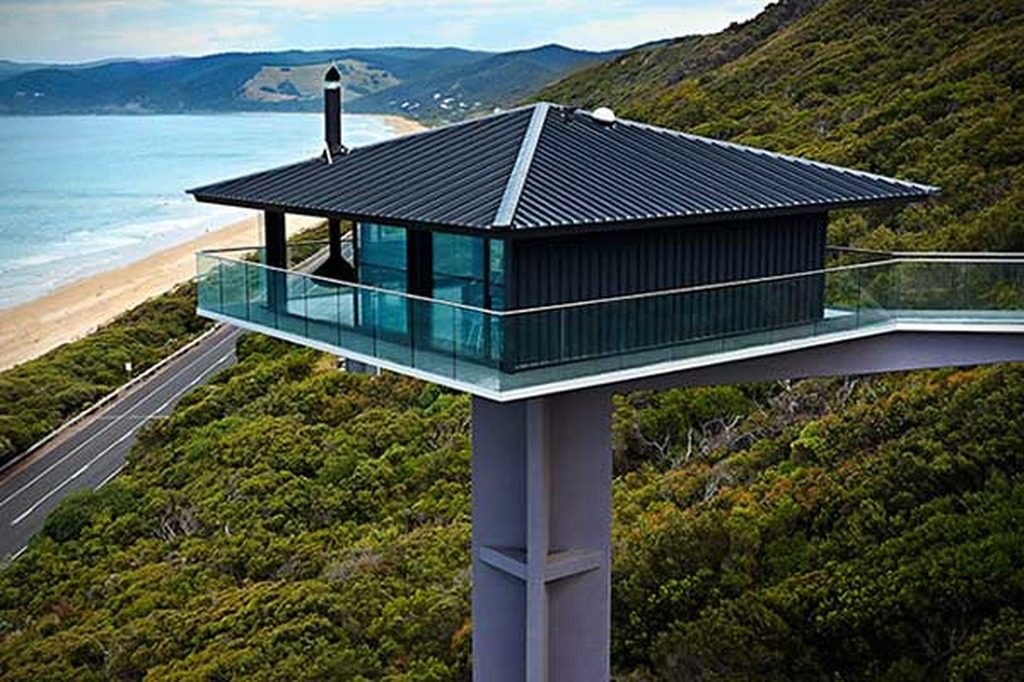 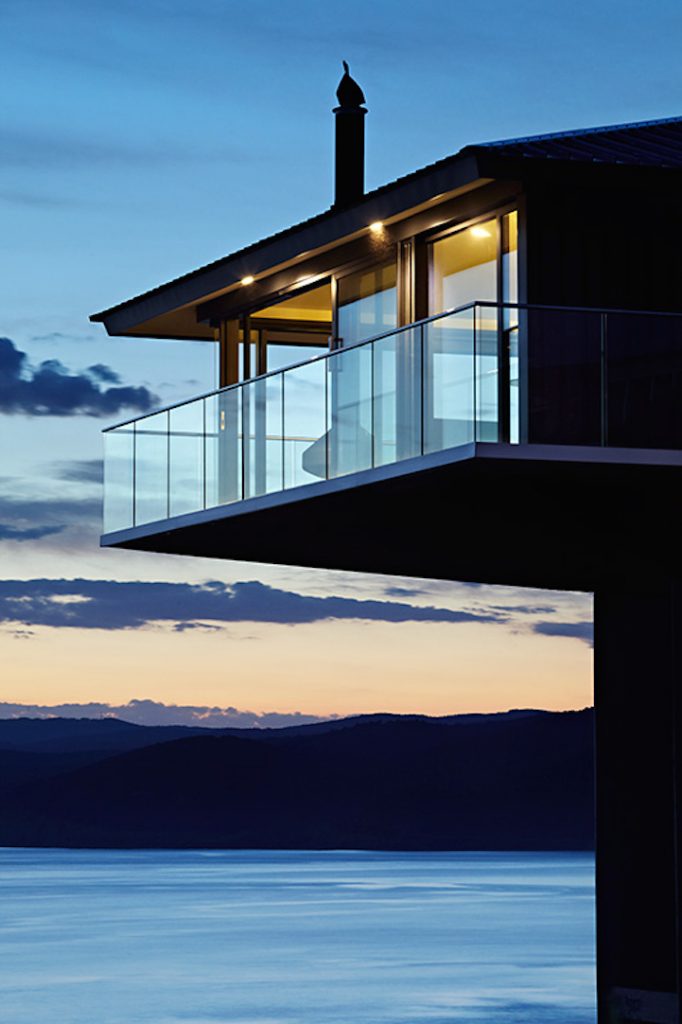 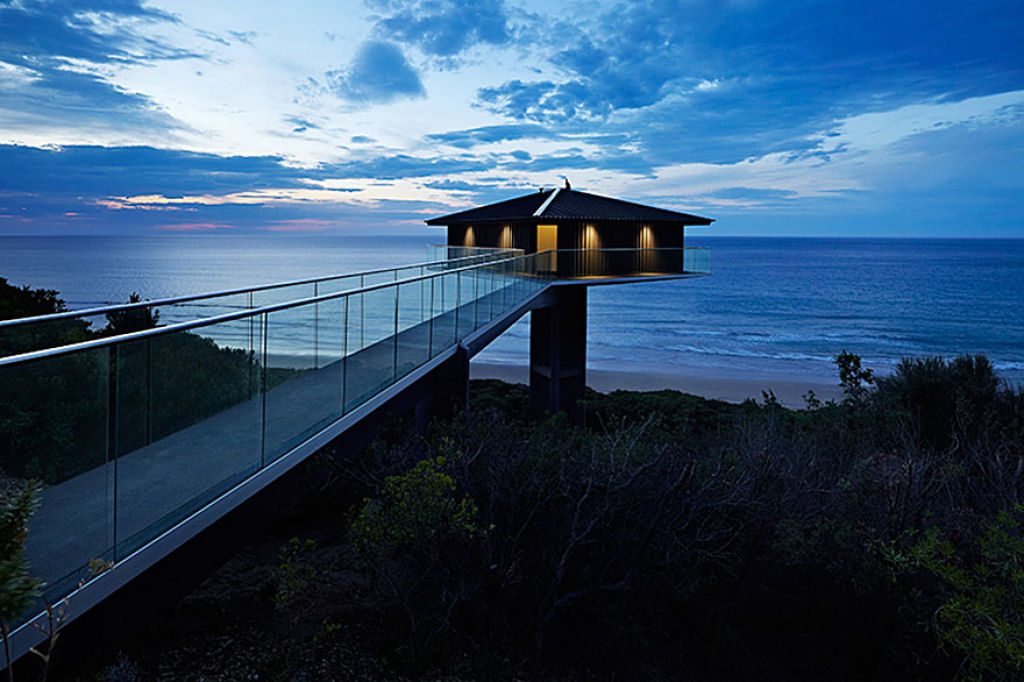