The construction of the PGE Arena Gdansk began in 2008. Once completed in 2011, was used to host football matches of Euro 2012 while went on to become the local team stadium Lechia Gdansk. The capacity is 41,000 seats.
The result of this project is a versatile space that meets the criteria of UEFA, and that not only offers a space with a unique backdrop, the Baltic Sea, but thanks to its multiple functions and accessibility, is set so durable as a venue for concerts and other events. The stadium has been classified in category 4 according to UEFA standards.

The Arena Gdansk was built on the outskirts of the city of Gdansk, Poland, to host some of the football matches of Euro 2012. It was built in the district of Letnica, C / Pokoleń Lechii Gdańsk 1 near the mouth in the Baltic Sea Wisla river

Gdansk, Gdansk in Poland is the sixth largest city in Poland and the most important port city in the country. Together with the cities of Gdynia and Sopot form a metropolitan area known as Tricity, Tricity. It is the famous shipyard where the union Solidarity was founded.

The stadium, which opened in the summer of 2011, focuses on two scenes that are typical of the region:

For one, its shape and color emulate a stone of amber, typical local material. The architectural form appears rounded and smoothed by water, sand and wind while a polycarbonate cover gives transparency, lightness and brightness to amber tones of the facade.

For the effects of light and transparency of the façade, bright outer layer is composed of a series of six different varieties of tinted modules, which combined create a homogeneous color gradient that gives identity to the sports facility.

The second aspect honors the shipbuilding industry and shipyards, important cultural site for the currency of Poland. Consequently, structural support Watermark stadium is reminiscent of the hull of a boat with his ribs and planking.

Despite you intend to use the space for concerts or other events in the stadium design other use other than the football itself was not provided, your lawn can not be removed and has no track. All seats for attendants are covered and for economic and temporary reasons the possibility of closing the roof was discarded.
Below the western grandstand stage is the building dedicated to business and VIP.

The PGE Arena Gdansk enclosure built on an area of ​​34 hectares, has a structure consisting of 82 main beams that support the weight of more than 18,000 polycarbonate plates used to cover 44.000m2 extension. Its dimensions are 236 meters long, 203 meters wide and 45 high.

The field has dimensions of 105×68 meters. The stands are located at 10.5 meters behind the goals and 8.5 meters from the sidelines

In stage there are 40 glass cabins where catering services are offered. Eight of these cabins have an area of ​​60 m2 and 30 m2 remaining 32. In addition to the booths, the stadium has 1,383 seats for VIP customers, just below the cabins. Both cabins as VIP seats have a separate entrance. The stadium has 50 additional seats for people with disabilities.

Qbiss One, modular facade was chosen as the material of the building. The elements of matt anthracite combined in some parts of the building, stairways or letters of the name eg working very well with the orange glow of the roof covering. It has a total area of ​​3,023 m2 of Qbiss One. This facade, conducted by the Slovenian company Trimo, was won numerous awards, including the orange color is achieved inside the enclosure

The exterior of the stadium is designed with the appearance of amber, product traditionally drawn on the shores of the Baltic.
The façade system Qbiss One, is self-supporting, insulating and fire resistant, combining pure, minimalist spaces and architectural elements, with complete technical solutions. The modular façade system, Qbiss One uses an “aesthetic junta” composed of two sheets of galvanized and prepainted steel. Prepainted steel plates adhere to the core of fireproof rock wool. The system can be used in concrete and steel constructions.

A Mexican cement company provided the building with three different types of concrete, with a total of 50,000 cubic meters. For the treatment of mixtures a mobile plant was installed directly on site, helping the construction was completed in a timely manner. One of the special types of self-compacting architectural concrete was used to construct exposed vertical elements, also decorative anthracite. Stadium foundation for 9,000 cubic meters of concrete special mega such structures were used.

Two logos with a height of 8 meters and a length of 35 and LED technology are located on the east and west ends of the enclosure respectively. 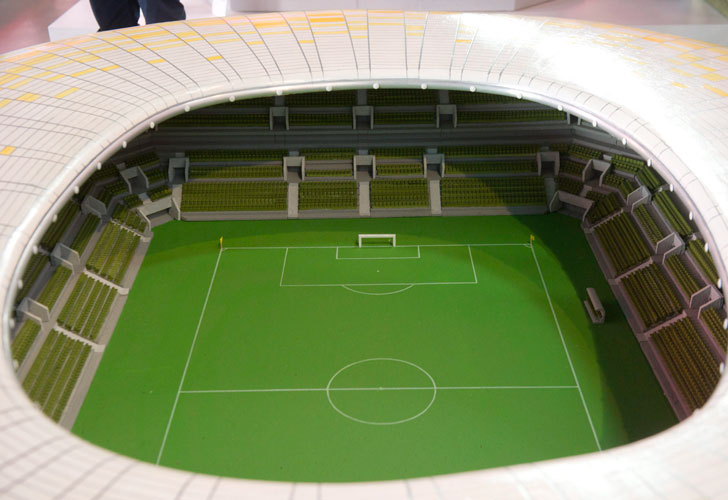 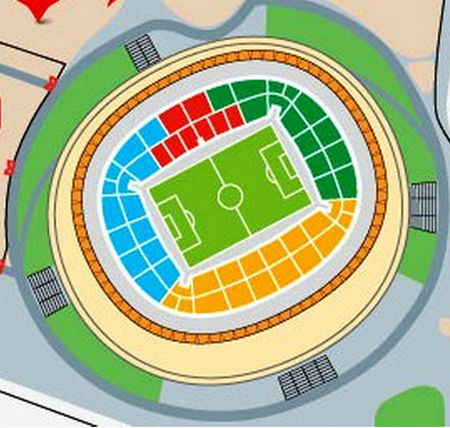 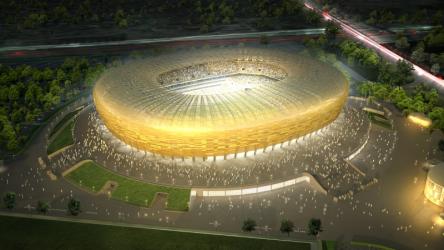 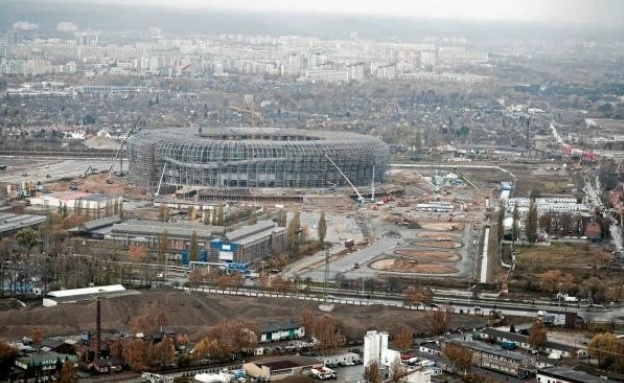 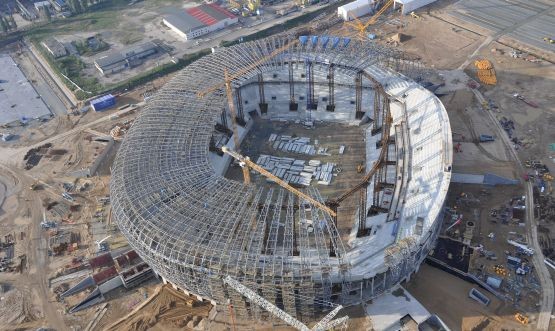 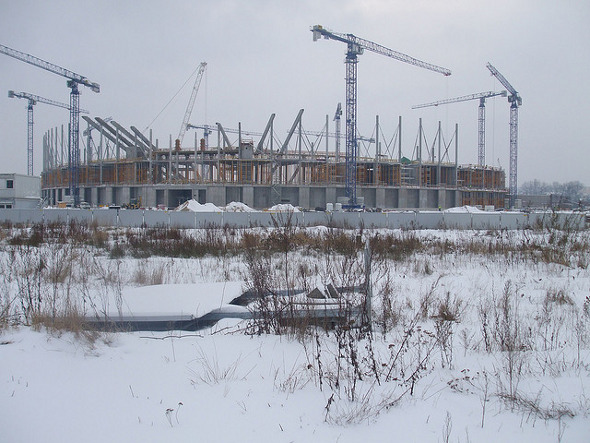 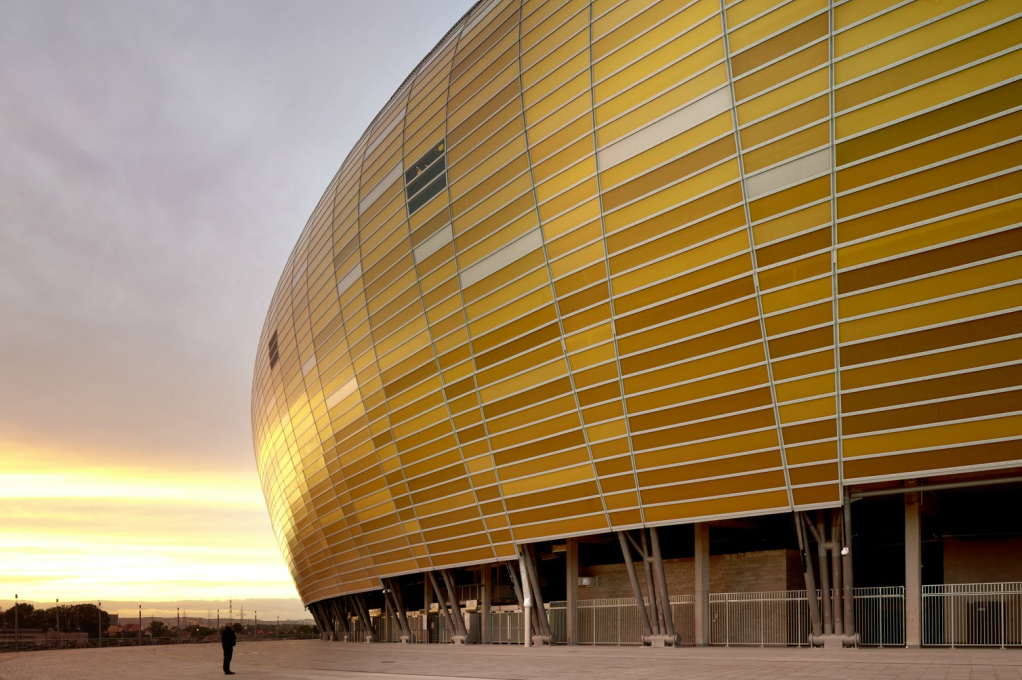 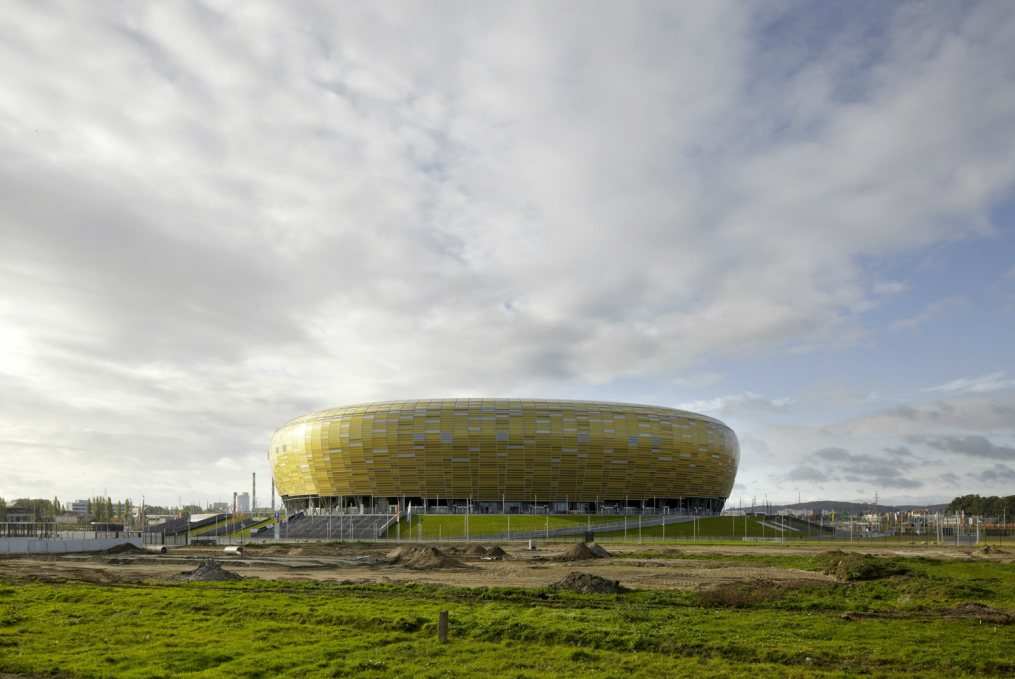 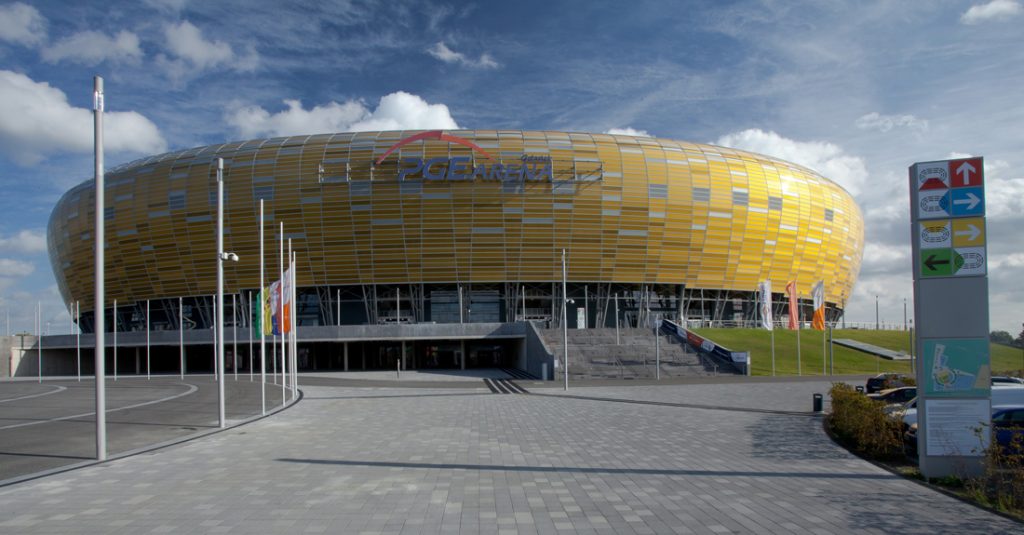 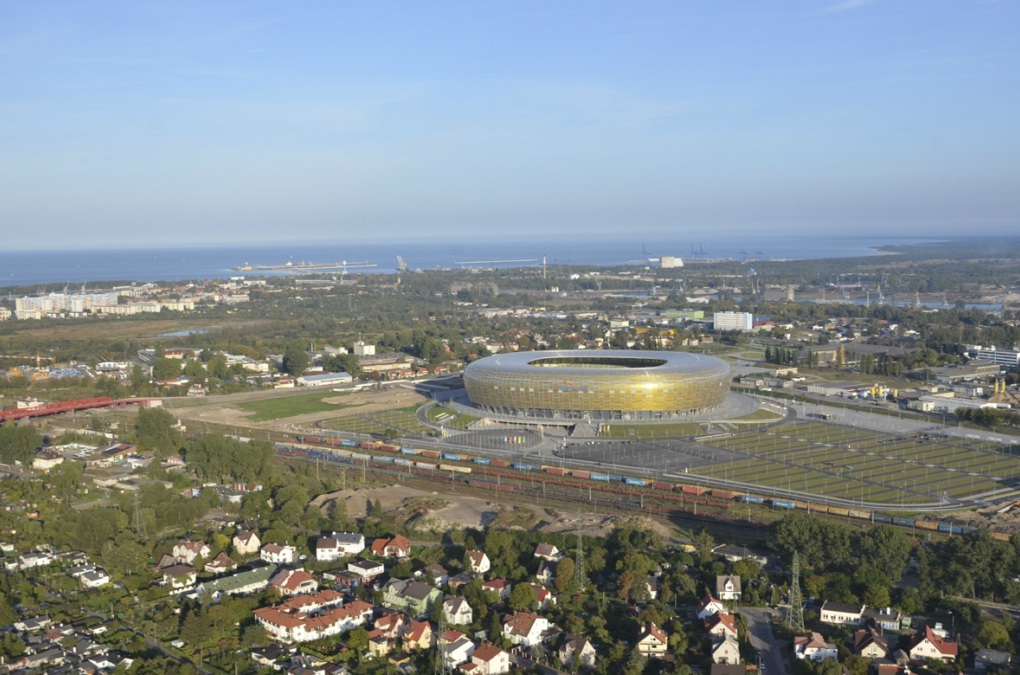 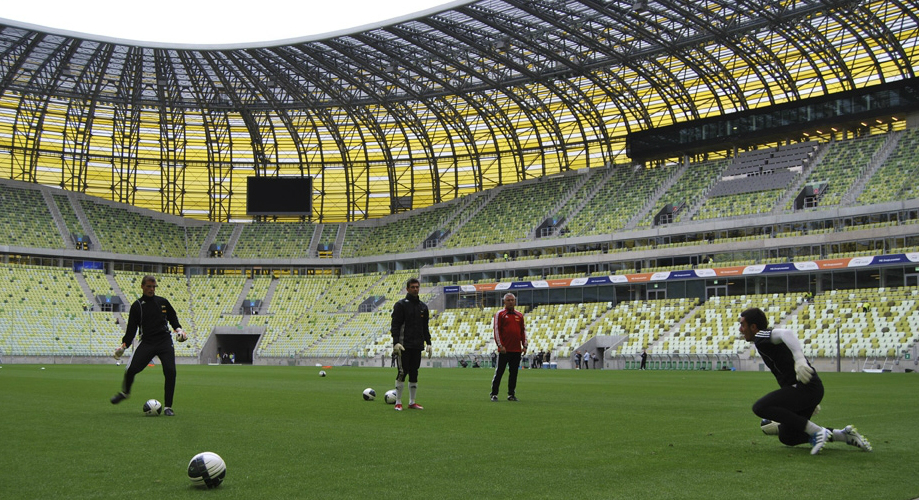 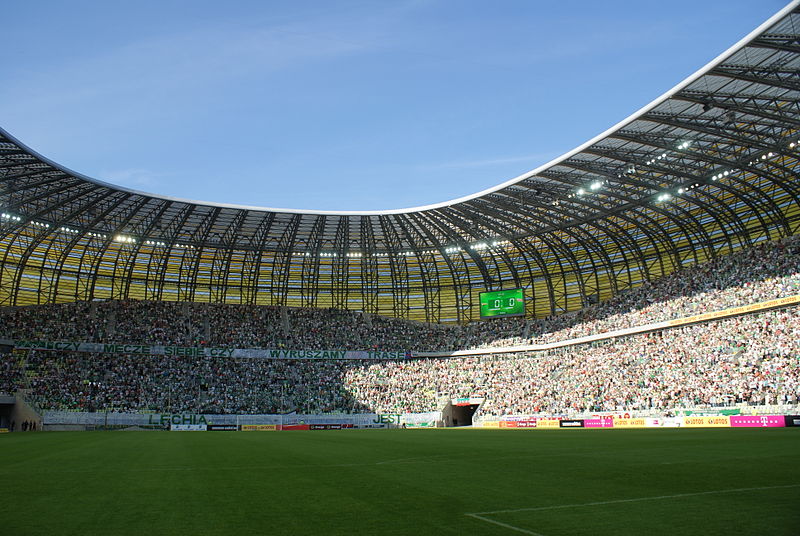 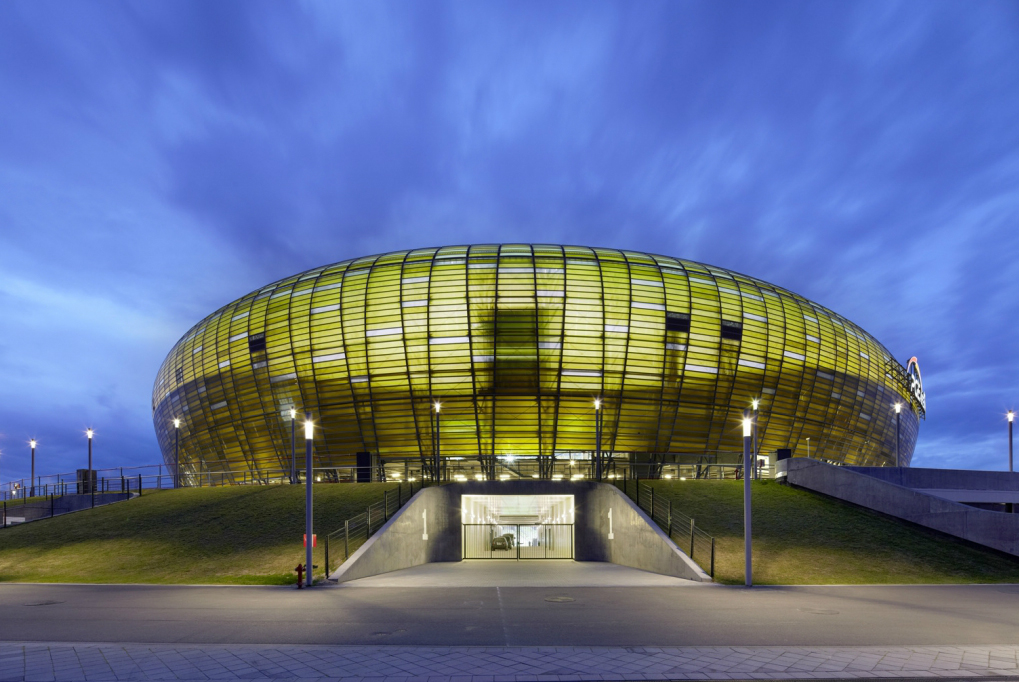 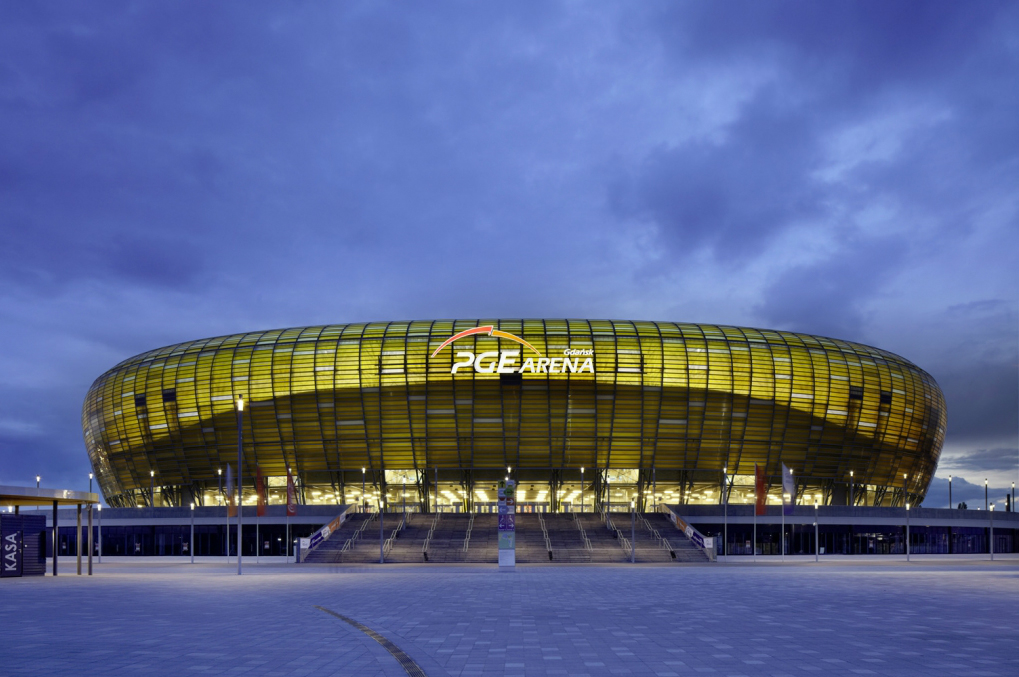