Jose Morales, John Marshall and Sarah Giles, young architects to study in Seville, in 2000 won the tender for the construction of a stage area in Nijar, white people, agricultural and craft at the border of the Natural Park of Cabo de Gata.

The most characteristic feature of the environment are benches in their gardens, the village has gradually colonized by these primitive orchards, but the appearance of the street and urban areas remains the same.

Just in agricultural lands which were located on the outskirts of the town stands today the new building, whose design is derived, according to its authors, the topography of the terraces for cultivation and diverse program that he should stay in

The Performing Arts Center occupies a site located in the town of Almeria Nijar, a former orchard in bancanales, barely visible from the road layout of this population

Located in Calle Real was the s / n, at the entrance of Villa Nijar, Almeria, Spain

The authors are interested in pursuing the concept of single space in the interior of each of the two volumes built. This new idea matrix was carried out from consideration as a simple tubular element and longitudinal uniform throughout its length, so that it fit in different packages released a functional space continuum that opens the way to Through these boxes colors.

It is designed as a multipurpose center, which can hold any cultural spectacle, as well as being prepared for exhibition hall, film screenings, lectures, workshops, music, etc..

The project had to meet two basic considerations:

The first is a satisfactory response to the functional requirements of the program being proposed and the second is right into a barren landscape, such as the environment Almeria.

Its characteristic urban landscape and the topography determined largely strokes overall project, which proposed to install the new theater on one of the gardens surrounding it.

Capture part of the landscape for banks and limiting the height of the project to the main street where public access is done, other patterns also marked the general idea.

The building comprises two functional differentiation box tube blunt forms prismatic open end that connect to the deepest level of the ground, so that the buildings in front of the ravine emerge in isolation, defined by the activity that each must understand.

In the interior space is unique in each volume. These bodies show distinct two guidelines, one longitudinal and the second vertical, the latter imposed by the limited area available on the site at which the proposed program.

Hosts the first and second floor

This deforms towards a somewhat more complex, which includes its lowest level in the auxiliary of the auditorium, then another level at which the two have music workshops and a terrace not passable. This second volume requires a long ladder for communication between successive interior spaces, while the former does not require other elements of communication in the form of stalls inside staircase.

It houses the third and fourth floor

In the longitudinal volume that occupies the northern boundary of the site is:

• The auditorium, with a higher level defined by a terrace flat on lifting the box occupied by the stage machinery and scenic box. From this higher level, and downward, are developing the bar, the lobby entrance and access from the towns of the upper floor, while the last level is occupied by the seats of the lower floor, at which is accessed from a second entrance that is below ground level

The auditorium is a highly schematic structure, with an audience served by four longitudinal corridors.

• Board of spectators and the scene here has opted for a single space, giving it two sets of telescopic stands out on the same plane, to achieve greater space, and can be divided into two sizes smaller without sacrificing any of their own functionality.

• The two left their bodies a few yards around the building released from the soil, which overlooks the ground set by gabions.

• The place involving the two parts built, where children belong to a theater Guignol host.

• A tubular, generating full uniform, travels throughout the project: a continuing gap through boxes of colors. These tubular shells, with their own material, intended to protect the hollow interior space, compared to aggressive external environment.

Packages that define the interior spaces and are moving beyond the sun Almeria, through the openings or mouths, which coincide with the cross section of the tubular element. These points are the only places where it shows the life of the building, especially at night, where the boxes are bright colors.

• Tickets for the independent public, making it the main street, and the technicians and artists.

The building with its appealing interior, extending its public space inside to urban public space. The life of the building is between the coming and going from one party to another building. Is expected to echo and run between the bodies volumes, where there permeates the landscape, or the sharp shadows of the torrid summer Almeria.

Bounding surface is generated based on light metal panels and perforated aluminum stretched (deploy) emphasizing the idea of overlapping elements, directing their views to the distant Cape of Gata.

The choice of this coating as envelope, to a desire to give the building, consisting of two solid and impressive volumes, and a festive light.

The surface of the facade has been resolved with anodized aluminum plates silver gray, 2,500 × 800 mm and 30mm Gros, stretched plate (deploy), bolted to run L40.40 angle of 45 degrees bent aluminum.

The aluminum angle bends 45 degrees to correct the deformation of the sheet when screwed. This frame is fixed at about horizontal vertical, rectangular tube 60×40 galvanized steel, each placed 80cm by some media, consisting of a trapezoidal piece built by cutting a tubular aluminum profile 60x30mm, so the plate is separated front of the plane.

The screws are of galvanized steel. To avoid galvanic pair stands between aluminum and galvanized steel a rubber washer.
Besides the elegant forcefulness with which the orchestra will be available in volume, the most seductive of the project is the game between opacity and transparency with a lattice-based coating of aluminum panels, which dosed the entry of raw daylight and through which filtered out the night lighting.

The building shines at night in contrast to live in the same building a day. It makes full use of the patent appeal color in this building, in stark contrast to the surrounding landscape.

Faced with color uniformity outside, the interior is an explosion of color that has its peak, in the lining of the room with stripes, but particularly in this new stage proclaims its status as contemporary installation updates cultural services the remote location. 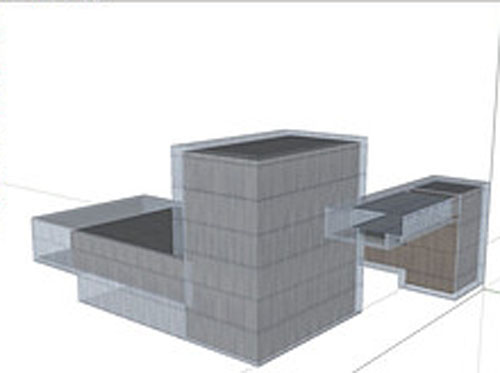 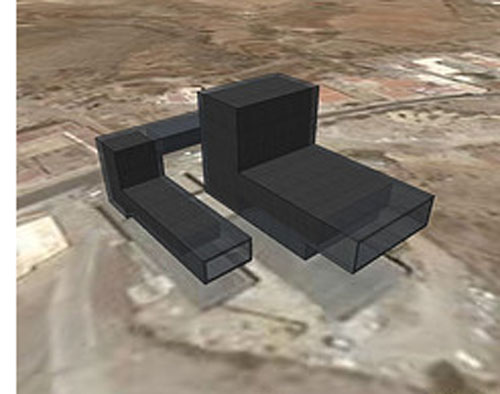 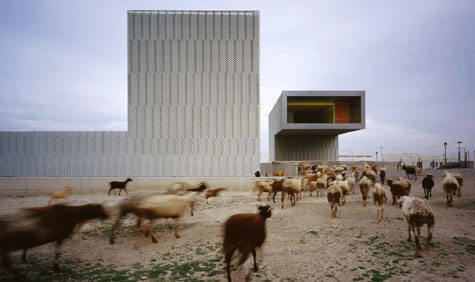 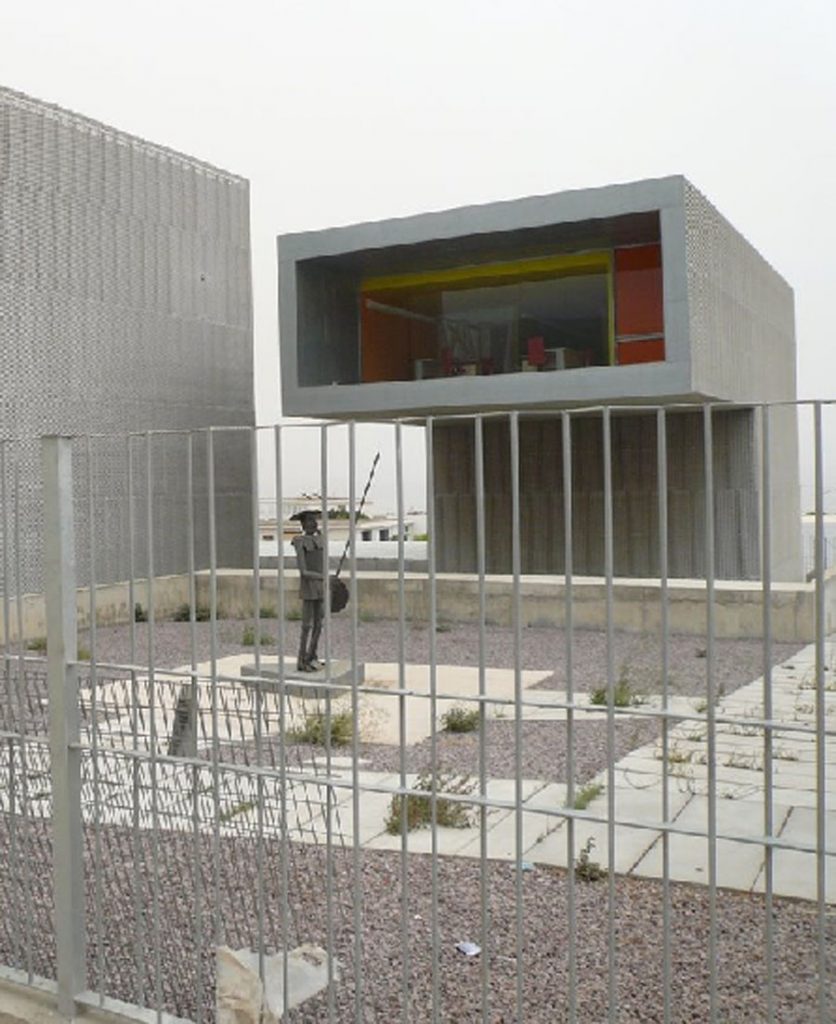 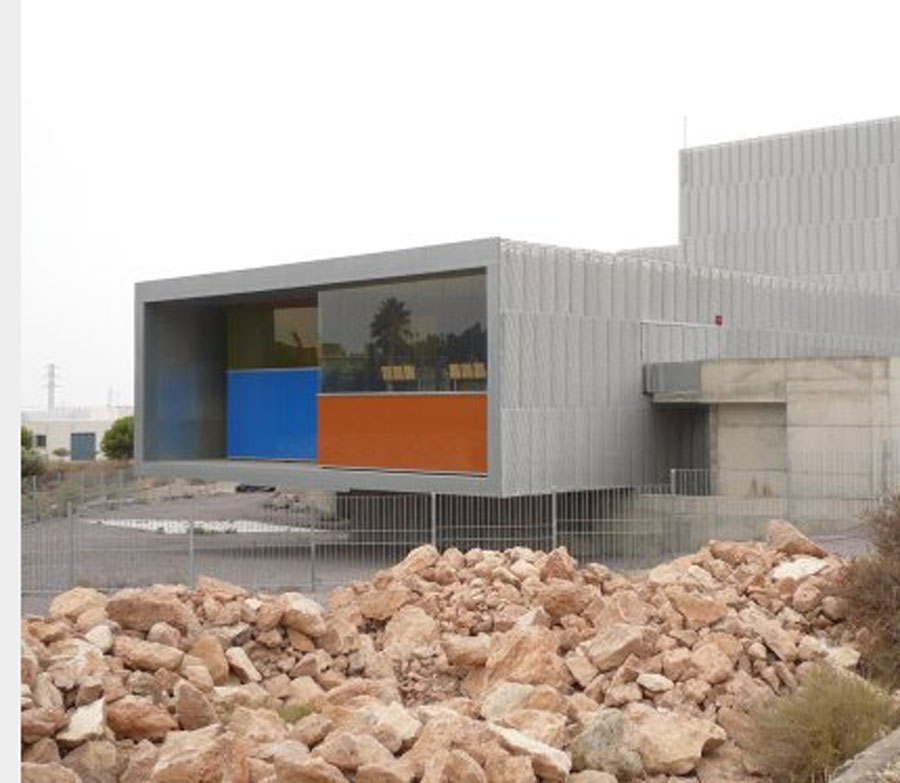 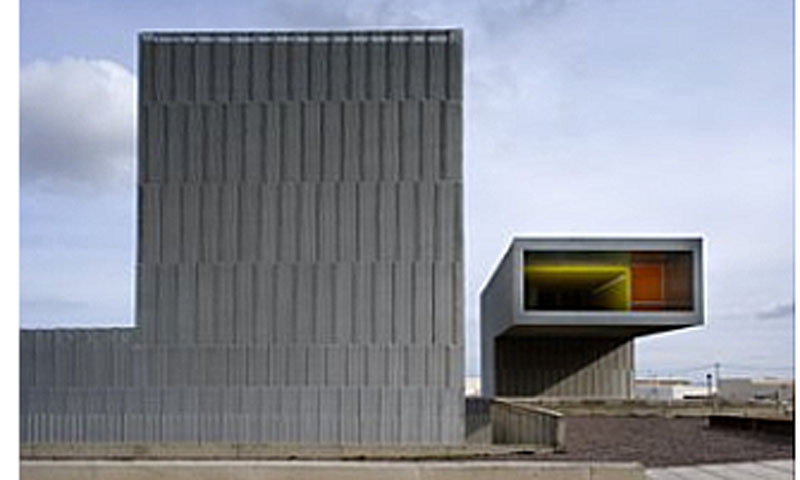 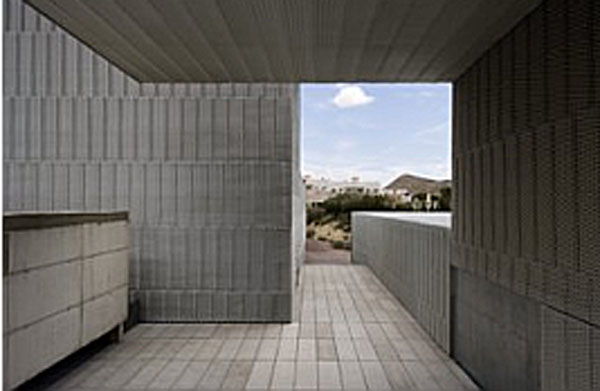 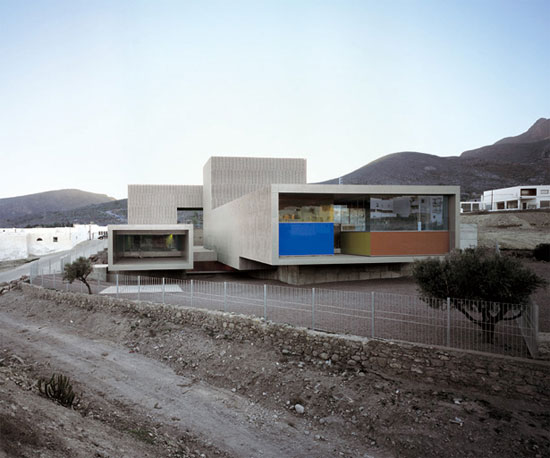