Paul Klee is one of the most influential artists of the twentieth century. His works, timeless and heterogeneous, still talk and remain on the cutting edge even with the passage of time.

The Swiss artist is noted for going beyond a single genre, and instead was left to bring their concerns in search of what you want. His figurative and abstract paintings in watercolor and oil paintings are his best legacy. His way of portraying and presenting his vision of things is simple and it makes it attractive to the eye of common onlooker.

But his work was not reduced only to painting and drawing, but also Klee ventured into music, writing, philosophy, and education.

In order to build a museum in memory and honor the most important Swiss artist, and generate a cultural center for the city was projected that this museum has more than 40% of the total work of Klee (donated by his daughter Livia ).

The work was entrusted to the renowned architect Renzo Piano. The Genoese architect is world-renowned works of the utmost importance, and its main characteristic is detected to know the essence of place, genius loci, and work towards it. Like Klee, Piano is not tied to an idea or preconception. His works are varied in terms of morphology, materials, and final image. His vision is broad and comprehensive, not only seeks to address a building, if not a better space and power to intervene and assist in urban area.

In an interview he did, Renzo Piano said, “Being an architect is best in the world because, on this small planet, where there is nothing more to discover, design is one of the few adventures left.”

Switzerland is a country that inspires confidence. Located in the heart Europe, the country gained its reputation due to its strong banking and production of the best chocolate. Its cities are very clean and organized. His landscapes always have the background of snowy mountains and green grass in the foreground. The people, right and quiet falls to this country with history and culture.

The museum is located in the area Schöngrüng, northeast of Bern. Amid a quiet green meadow implanted this museum. To forests in the background and the Alps on the merits, the building seeks to mimic the context.

In the land donated by the physician Müller, pays tribute to Klee’s death, although born and died in Switzerland, did all his work in Germany because it denied citizenship in life. Therefore, as a claim to the artist, the museum was planned next to the cemetery where the remains of Klee, a clear sign of recognition.

When Renzo Piano learned where to going to work, the first thought that came to mind was to use the context to create a composition that could be appreciated from every standpoint, “Klee does not deserve a museum, but a landscape. When I knew what the place looked like a sculpture of land. Then it should work as a farmer. ”

The idea was to create the piano more than a museum. Klee and was much more than a painter, the architect felt the need to create more than one building; cause sensations, a pleasant experience, and a delight for the audience were the target.

The irony and tragedy is often blended with innocent images in the works of Klee. The depth and complexity combined with a simple stamp.

Renzo Piano was the lightness of the artist’s sense of belonging and light. It was therefore decided to create a place, raise the land, making land available for a work of art itself. As if it were more of a survey done by a knowledgeable farmer, rather than the result of an architectural methodology.

So he designed three hills. Three waves that rise and from the ground. With different dimensions, the three waves traverse the ground like a sculpture or the result of the same nature.

The entire complex is parallel to the highway and takes the shape of the curve. The design is subtle and expressive, sensual in its ranks. The functions are hidden in the interior and the unusual image of the museum is intriguing and striking. However, by burying much of the museum and build an embankment of wheat and poppies in front, the building is even more hidden and scale seems considerably diminished.

Each of the undulations hosts a different role in it. The first of them and the largest, covers the lobby, the lobby, an auditorium with 400 seats, and art workshops for children.

The auditorium can be used for conferences, presentations, and even for the new orchestra “Ensemble Paul Klee” touch for the visitors. In the same way, the workshop seeks to create a children’s room for the little ones having their first approach to art and to feel comfortable in a place that is usually not attractive to them.

In the second wave, the middle, smaller than the first, is the permanent collection of Paul Klee, and spaces dedicated to temporary exhibitions. The gallery has 1700m2 and walls can be moved to form a variety of interiors.

In the third one, the lowest of all, lies the center of research and administration.

These three bodies of the center are united by a “street” pedestrian traffic up and joins the main route the cafeteria, office and library. The path goes its way between the large arches and illuminated with 150 meters of the first “hill” to the last.

The design of the Zentrum Paul Klee is characterized by the structure of corrugated steel deck. These beams have the curves of any complexity is equal to the other as the wave extends from the front to the back next to where you lose ground, and each “wave” has a different height. It is estimated that the entire building were used for beams 4.2kms.

The geometry of the building so special is the fact that the section of the steel arches is slightly tilted, but always in different angles. The arches are tensioned by a compression stanchions directly integrated into the structure of the roof to prevent the arches bend backwards. The ends of the steel arches are compressed together using ligatures which are connected to the ground and the floor slabs to prevent the arches from sliding steel base. Each of the curved steel beams, with different weights, has been constructed individually.

The individual sections were first cut from large sheets of metal using a cutting machine controlled by computer. Then shaped its final form and eventually welded together. The strong curvature of the steel beams that prevented welding process could be done by machines, which means that more than 40 km have been welded together by hand.

After reviewing alternative materials such as aluminum, copper and titanium, it was decided to use a special steel for the deck. Ecological criteria, economic and technical were crucial to this election.

The structure is covered, along with the foundations and facade were simulated by computer 3D models and analyzed by many experts.

The materials used by Renzo Piano for the center are few and precise. The glass for the glazed facades, steel gray and oak interior floors are all that the architect needed to realize their project.

This only adds the use of umbrellas in the main facade, used to control the entry of natural light, as many of the works of Klee are very likely to be affected by it.

From the inside, the steel structure remains visible, and are accompanied by large arched ceilings birch with its natural color or painted white. This use of few materials must Piano wanted to emphasize the fact that the exterior landscape provide the necessary color into the museum.

Another aspect to highlight is that Piano wanted the building would be sustainable and have the lowest energy consumption possible. Therefore, environmental impact studies were conducted on each material. In this way the steel beams that were studied as a whole, the deck having a good insulation, as well as the use of double glass guarantee the lowest energy loss in winter and air conditioning in summer. To this we add the hardwood floor that has thousands of small and almost imperceptible grooves, which allow the cool air passes through them, and warming up as they go up, only to be expelled to the outside and thus promote proper ventilation. 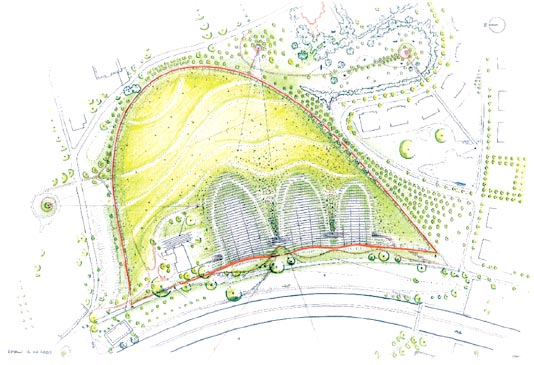 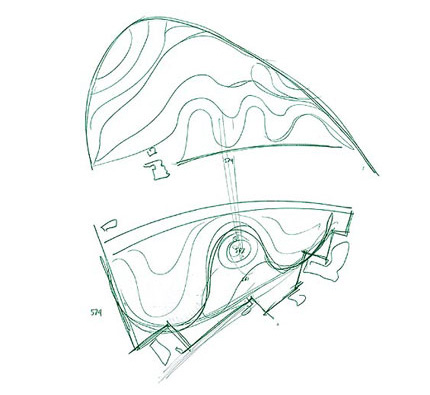 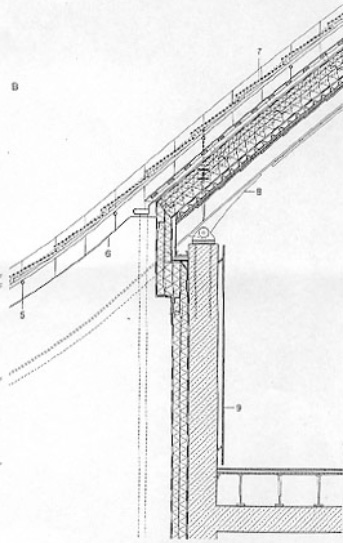 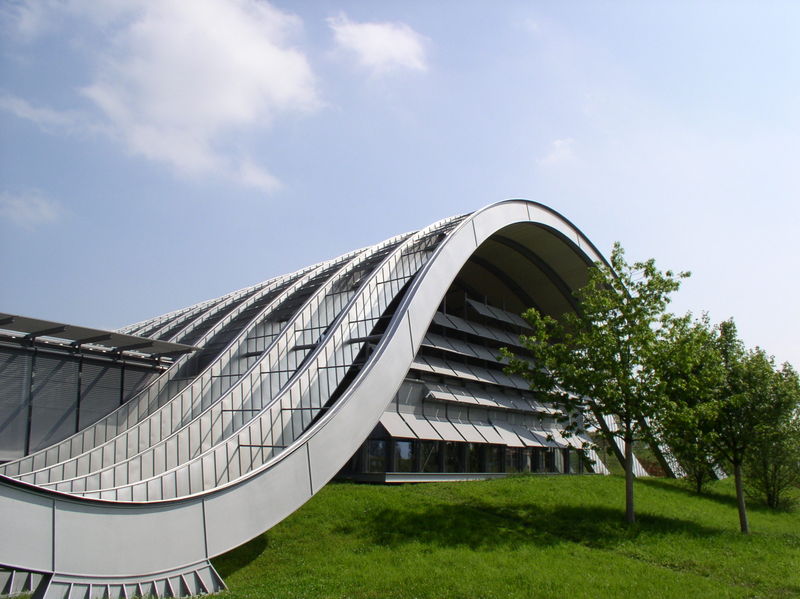 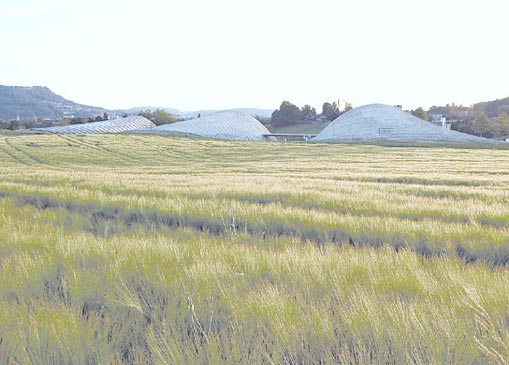 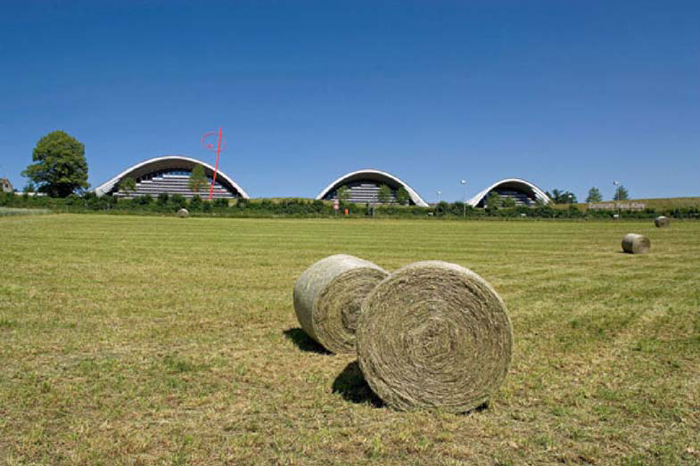 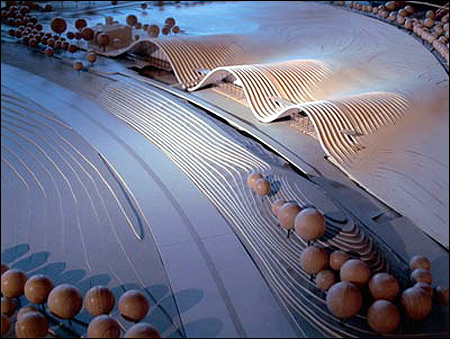 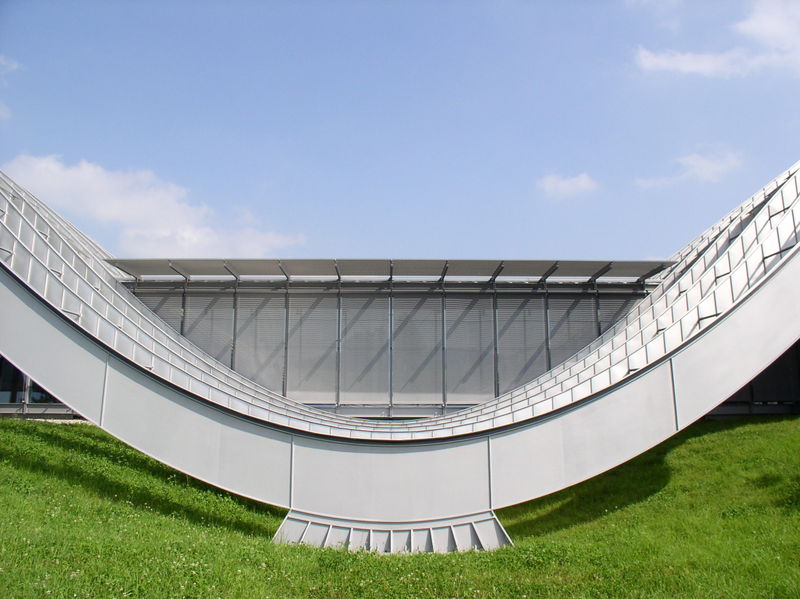 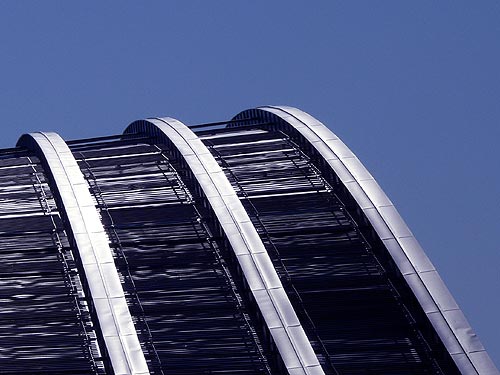 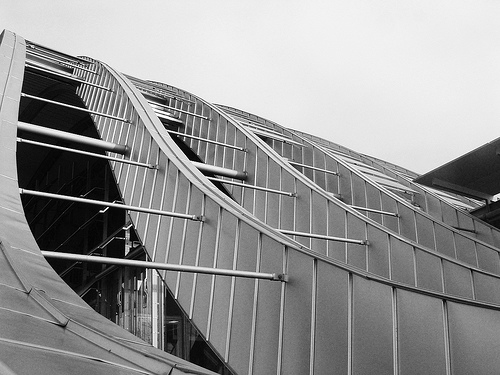 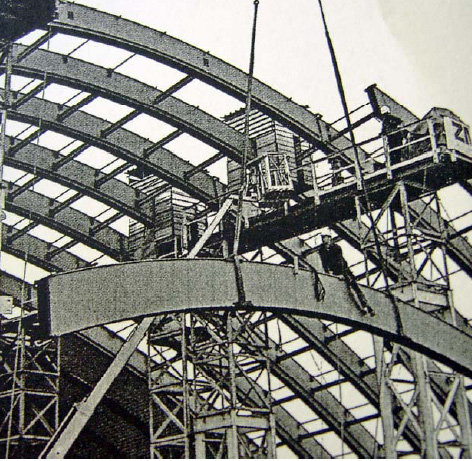 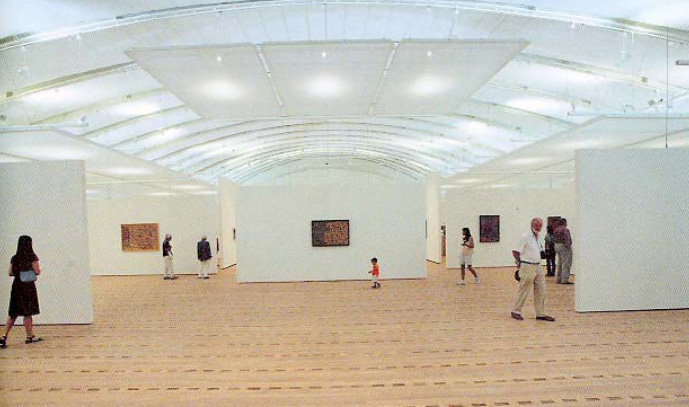 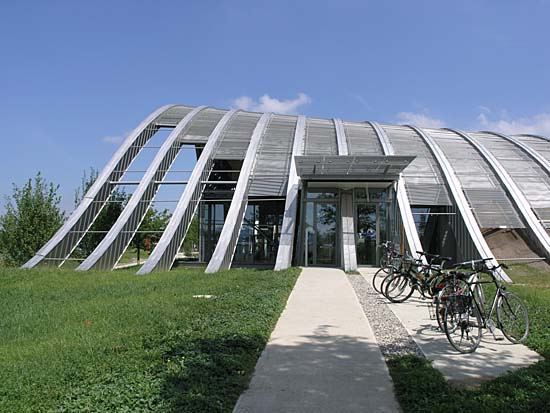 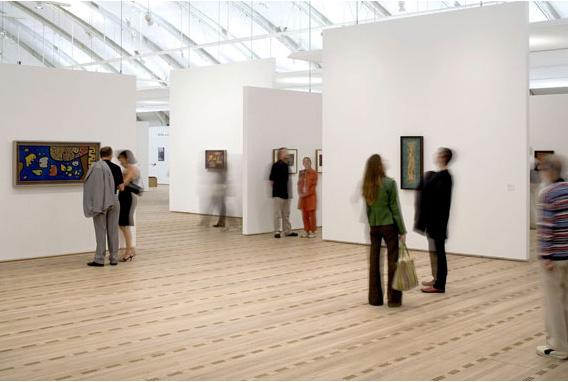 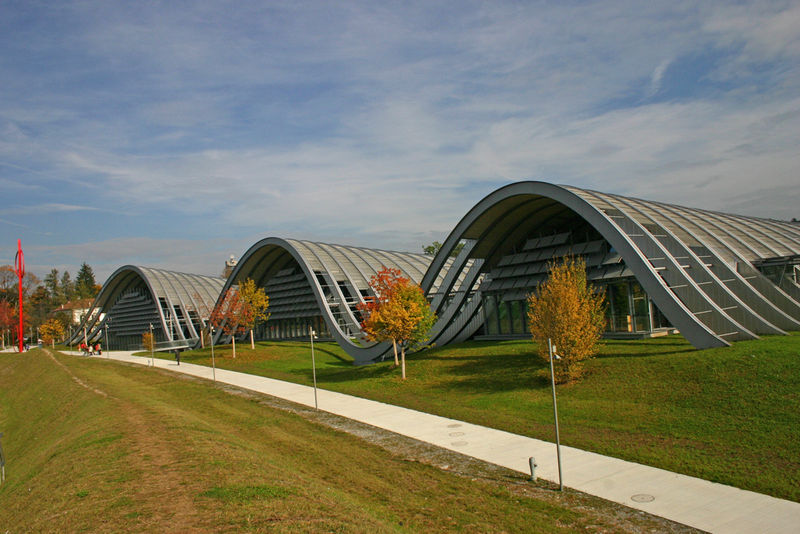 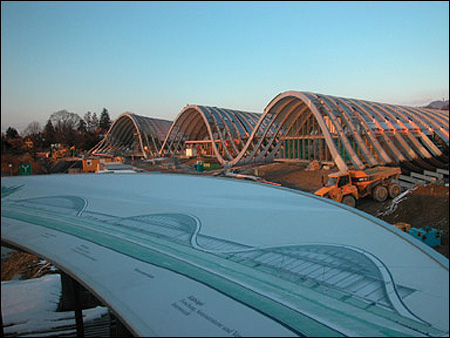 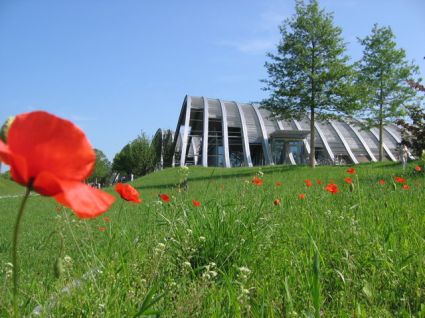 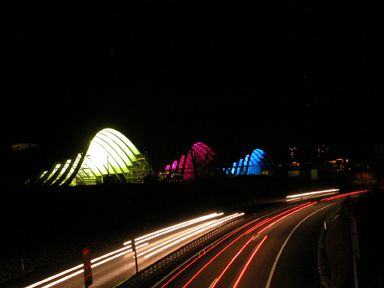 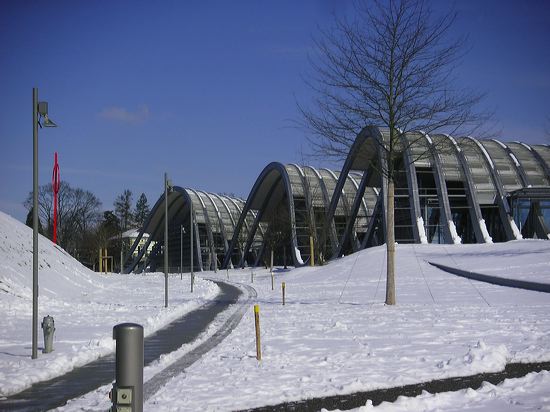 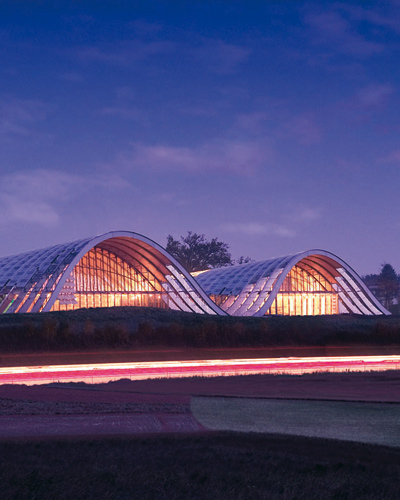 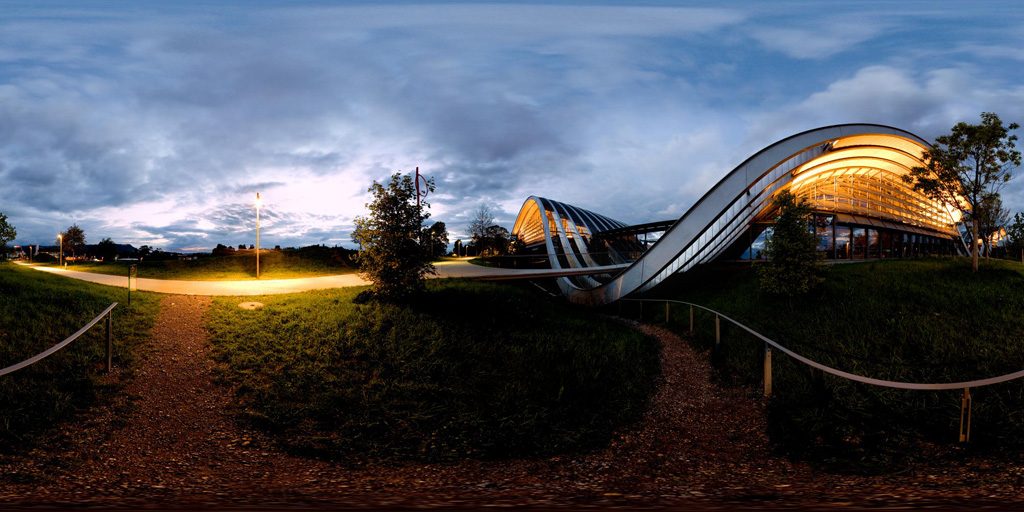