Panathinaiko Stadium is the only Olympic stadium in the world built entirely of white marble and the U-shaped single It was the official venue of the first Olympics of the modern era in 1896 and the place where the festivals in ancient times, the athletics events during the famous and great games, then called Panathenaic, in honor of the goddess Athena. Also known as Kallimarmaro which in Greek means “beautiful marble”

You are on the same site that Lycurgus stadium built in 330 BC, and renovated in the year 329 BC as directed by Pausanias, was when he made of marble. 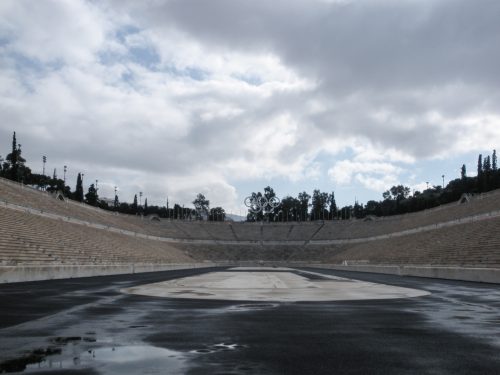 In the year 140 AD, Herodes Atticus as amended and extended again giving capacity for 50,000 spectators. Later, he served for hosting gladiator fights, and after the fall of Rome was used as a quarry to be in ruins.

The stadium fell into oblivion until the nineteenth century when Evangelista Zappas sponsored the excavation of this structure in order to revive the Olympic Games. He himself sponsored the Olympic Games in 1870 and 1875, but it was not until a second reform, which officially held the first Olympics of the modern age, in 1896. In this second attempt, more successful, she turned to another benefactor, George Avenoff, whose marble statue now stands in the doorway.

In recent years this stadium has been often used to hail the victorious return of Greek athletes, as the reception made the Greek national team football after his triumph at the European Championships of 2004 and the opening ceremony World Championships in Athletics in 1997 with a concert by composer Vangelis Papathanasiou.

During the 2004 Olympic Games, the Panathinaiko Stadium hosted the archery competition, and the end of the Marathon. Every year is the place where the winners who manage to enter to finish the Athens marathon, a unique feeling for runners. The rest of the 2004 Olympic competitions were held at the modern Olympic Stadium which is located in the north of the city.

It is often used for musical performances on stage, while in July 2009, the artist Sakis Rouvas made history by filling the stadium with a concert to benefit the environment and that coincided with the first day of the ban on public smoking in Greece. Oddly enough, the Panathinaiko Stadium is the main reason for a Greek coin collectors € 100 minted in 2003 to commemorate the Olympic Games in Athens in 2004. 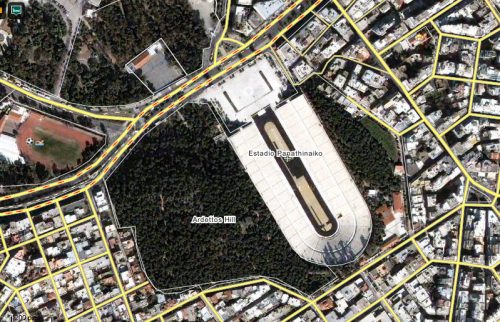 The Olympic Stadium is located in the center of Athens between the National Garden Exhibition Hall Zappeion, early Vasileos Konstantinous street and close to the hill Ardito, whose slope is exploited to make the stands.

Panathinaiko Stadium in Athens today is based on designs by architects Anastasios Metaxas and Ernst Ziller. The stadium was remodeled long before the dimensions of the spaces devoted to athletics were standardized so that its design and dimensions correspond to the classical models but with greater capacity, more than 70,000 spectators in fifty rows of marble steps.

During classical times the stadium had wooden seats until the year 329 BC Archon Lycurgus changed into white marble Pentelicus, the same as that used for the construction of the Parthenon on the Acropolis.

The Panathinaiko Stadium track in Athens, home of the first Olympics of the modern era, it was grass, was later replaced by clay.