PalaLottomatica was built as a sports hall for the 1960 Summer Olympics and 2015 remains the biggest event center of the Italian capital. Its design is considered one of the masterpieces of Italian rationalism and is based on the design by the architect and engineer Pier Luigi Nervi and architect Marcello Piacentini.

In 1955, the IOC (International Olympic Committee), chose Rome as a city for the Olympic Games in 1960. He decided to build a pavilion for the event multipurpose, although designed primarily for sports activities. The architect Marcello Piacentini was commissioned conception and design of the building, however, the structural part, the engineer Pier Luigi Nervi was assigned. The first project was introduced in 1956 and included a circular with a diameter of about 100 meters building, entirely made of reinforced concrete. It was built and completed in just two years, from 1958-1960.

In 2003 ForumNet Group commissioned the Roman architect Massimiliano Fuksas restoration of the facade, and was returned to the city. Fuksas was inspired by the “Smorfia Neapolitan” for the restoration of the facade of 384m light surrounding the pavilion. Managed by this group is the only Italian headquarters, along with Mediolanum Forum Milan, part of the AEA (Association of European Arenas). 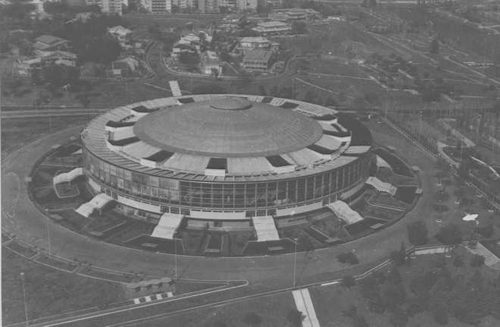 PalaLottomatica Pavilion was built in the EUR district, one of the main new areas with great architectural works of the capital Italy, Rome. Its location, Piazzale dello Sport, 1-00144 Rome, makes it easily accessible from the Termini station, Fiumicino Airport or the bypass.

Formerly known as PalaEur, the area where it is located, it was renamed PalaLottomatica, as it took the name of the sponsor, who personalized glass facade.

The project of the new facade is inspired by the “Neapolitan smorfia.” The goal of the renovation for which is the biggest event center of the capital, was to combine beauty and functionality, giving it a unique setting, while preserving original architectural features and improved functionality for large music and sporting events, covering acoustics, lighting and modular spaces.

The sand was reopened in 2003 as a multipurpose space. In addition to the renovation of the facade they were added circulate to their external facilities 20,000m2, 2,400m2 with a terrace overlooking the lake EUR. Its refined architecture, its circular shape and impressive dimensions, the dome has a diameter of 95m, making it one of the largest and most important stages in Europe housing interior congresses as well as sporting or musical events. 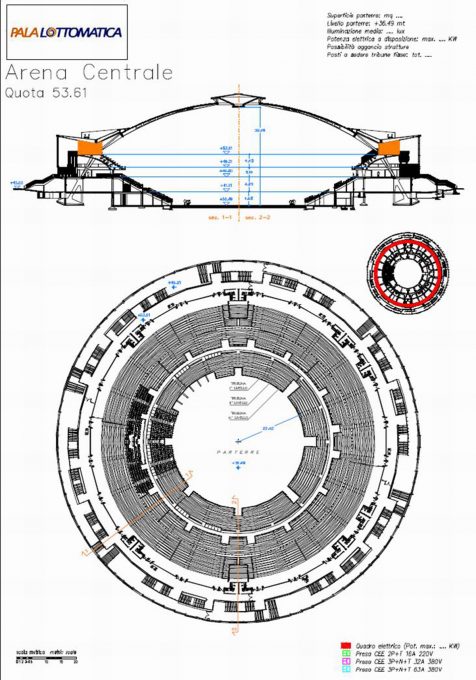 The large central Arena PalaLottomatica, 1578m2, which is accessed by multiple gates, is characterized by its circular shape, with a diameter of 45 meters and a height, the highest point of the dome, 35 meters. 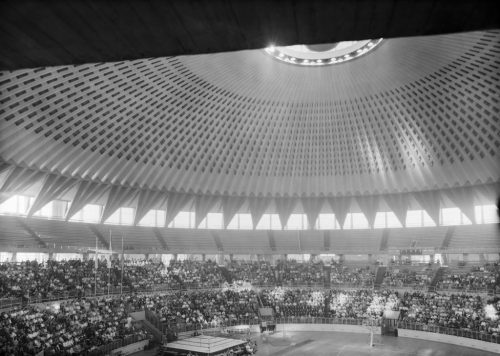 The space arena is modular and allows for different solutions, with a structure that provides for a capacity of 11,500 people in the case of concerts or sporting events to the use of a single stage to stand with 1,000 attendees.
Facilities include 5 restaurants, 3 of which are located along the scenic Ring of 3,000m2 which communicates directly with the sand. This area also has 8 changing rooms, 4 offices, air conditioning and heating.
There are parking spaces for guests and visitors. 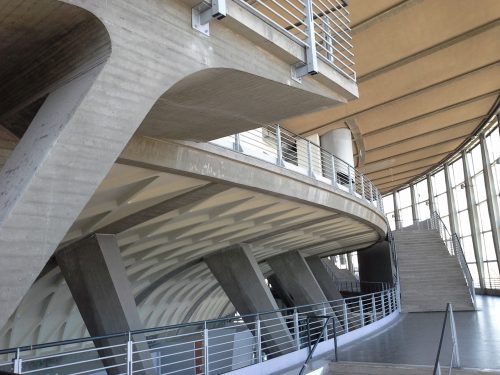 With its 3,000 m2, the panoramic ring runs along the top edge of the Central Arena. Subdivided into smaller spaces, they are suitable to host different events, fairs, exhibitions, meetings and gala dinners, the latter sitting accept up to 2,000 attendees.

Ring with a height of 5 m and a length of 300m, enjoys a privileged position, with double access, one external and one from the Central Arena PalaLottomatica.

PalaLottomatica features rooms and additional space to complete the range of possibilities for the realization of different events: 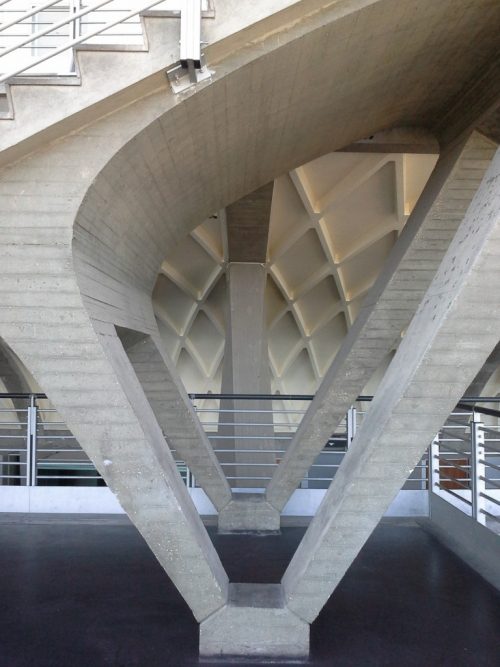 The cover consists of a spherical cap with 100m in diameter and a thickness of only nine centimeters at the top, which is supported by 48 pillars inclined according to the resultant of the thrusts of both the cover and inside the gallery stands with distribution ring. The dome is made up of prefabricated concrete sections in a “V” forming an inside view of painted white diamonds that are linked to the pillars of triangular shape. The forces that lead to the outside from the roof is collected by Y-shaped buttresses surrounding the perimeter of the building, another reference to the old architecture which Nervi was so fond.

The elevation of the exterior facade was made of steel and glass, giving it a cylindrical shape that masks internal development.
Between 1999-2003 the whole building has been completely renovated to consolidate existing parts and adaptation to the new security rules, including bars and restaurants inside and improving the acoustics for the wide variety of events organized in the building. Over the entire external facade architect Massimiliano Fuksas created a fluorescent lighting lamps representing the number of “smorfia” in tribute to the sponsor who has purchased the entire building, calling since Palalottomatica.