The organization of this complex group of government offices and courts, requiring the creation of separate areas for juvenile courtroom, adult and offices for civil and judicial administration.

The architectural solution was to design three groups of buildings, for each of the three different activities, around a courtyard, linking access through a pavilion and a driveway that frame the general admission.

The original project consisted of three interconnected buildings, each with a different function. These buildings surrounding an open courtyard that allowed the entry of natural light into the interior spaces and also acted as the main entrance of the three buildings. The largest building, located in the northeastern part of the complex was designated as County Superior Court and Court of Elders. The building located west of the Supreme Court and that runs parallel to the main street was the Juvenile Court and the Legislature County Government was in the building located further south.

In 1997 the main court building was declared “unfit” for occupation and replaced by an additional wing built in the northern part of the original structure. The original courthouse was demolished.

The city of Goshen is mainly composed of low-rise structures of the eighteenth and nineteenth centuries. The Government Center is located along Main Street on a plot of 97,124 meters square, surrounded by a large park surrounded with lawn.

The volumes, clearly brutalist style, are the result of the interpretation by Rudolph the concept of “implicit space” developed by Mies van der Rohe. The construction plans, highly articulated, reveal a clear concept, almost mathematical approach of space, light and structure of the architect.

“…… Need space sequences, awaken curiosity, give a sense of anticipation, we invite and drive to run forward and find the space dominates, which climaxes and acts as a magnet, showing the direction…. “Paul Rudolph

Both the exterior and interior shapes and materials, are designed to play with natural light and shadows, high ceilings and large windows that take advantage of the large open space surrounding the structure.

The brutalist style clearly derives from the interest of Rudolph on “work” with the concept of space between lines of Mies van der Rohe.

The exterior facades are articulated strongly with slabs and roofs progress to finish textured formwork, with the space between them filled with concrete blocks.

The Orange County Government Center is comprised of three interconnected buildings concrete, and similar surfaces. There are a total of 76,200 meters square, not including outdoor spaces, ceilings over 80 fixed and 300 windows.

These three areas are subdivided while closely grouped around the courtyard, which allows light to enter through a well-organized series of skylights, made possible by the high ceilings in the rooms bigger and more important.

Inside the buildings, the enclosed spaces of the rooms, frequently penetrate into each other, producing the effect of space beyond its limits, but facilitating soundproofing. The resulting fragmented scale seems appropriate, given the location of the building, in a park, the small size of the nearby residences.

The whole project was developed following a template alternately narrow and wide spaces, creating a rate of 3:1. Variations of the same pattern extending in all environments encompassing the elements, rooms and outdoor spaces. This system of solid walls or windows, or placing them parallel intersecting planes, creates spatial harmony and focused both internally and externally. The same rate is reflected in the spaces of the courtyard between buildings.

The yard has several levels and paving patterns also adhere to the template of 3:1

Inside each of the buildings has large courtrooms, to be the center of their legal activities. The largest can accommodate 125 people, the smallest for 24. The chambers of the judges and officers are located next to the courtrooms.

The Center also has a finance office, rooms for inspectors, advocacy section for civil liberties, committee rooms for jurors, court of auditors and rooms for the county clerk and the district attorney.

Each building is three stories high, consisting of a series of concrete boxes, or blocks, stacked on each other and supported by cantilevered concrete beams. Each extrusion mass is defined by fenestration. The individual boxes vary in size but are uniform in style and in the use of glass panels from floor to ceiling.

Some parts of the structure of facades appear as organic structures such as some smaller blocks placed on the first floor and you will grow as you climb to look like the building, as a tree grows in the ground. Others have a more marked because of the blocks and soils seem to coalesce and lose shape.

The interior spaces are well planned by the deliberately wide open space in the center of the whole structure. In the drawings shows the complexity of such spaces.

The structure is mechanically simpler and abroad, with regularly spaced columns hidden from view air conditioning modules and channels of lights. The structural engineer Lev Zetlin, created a structure consisting of parallel beams of 1.50 meters wide by 0.60 deep that were placed every 5.50 meters ranging between 12 and 15 meters.

Special care was taken to conceal the mechanical functions of the building. The air conditioning ducts and lighting connections were incorporated into the building structure to hide them from public view.

The buildings have a concrete structure, noting paint ribs separating plants complementing the exterior walls and large windows. Rudolph used a technique in concrete rough texture, similar to that applied for the first time in the building of Art & Architecture at Yale University.

The building stands out not only for the exclusive use and massive textured concrete, but also by the deliberate use of natural light. Light plays with the rough texture of the building, with the extrusion of volumes, with open courtyard and interior spaces, using large windows with a single pane of glass. 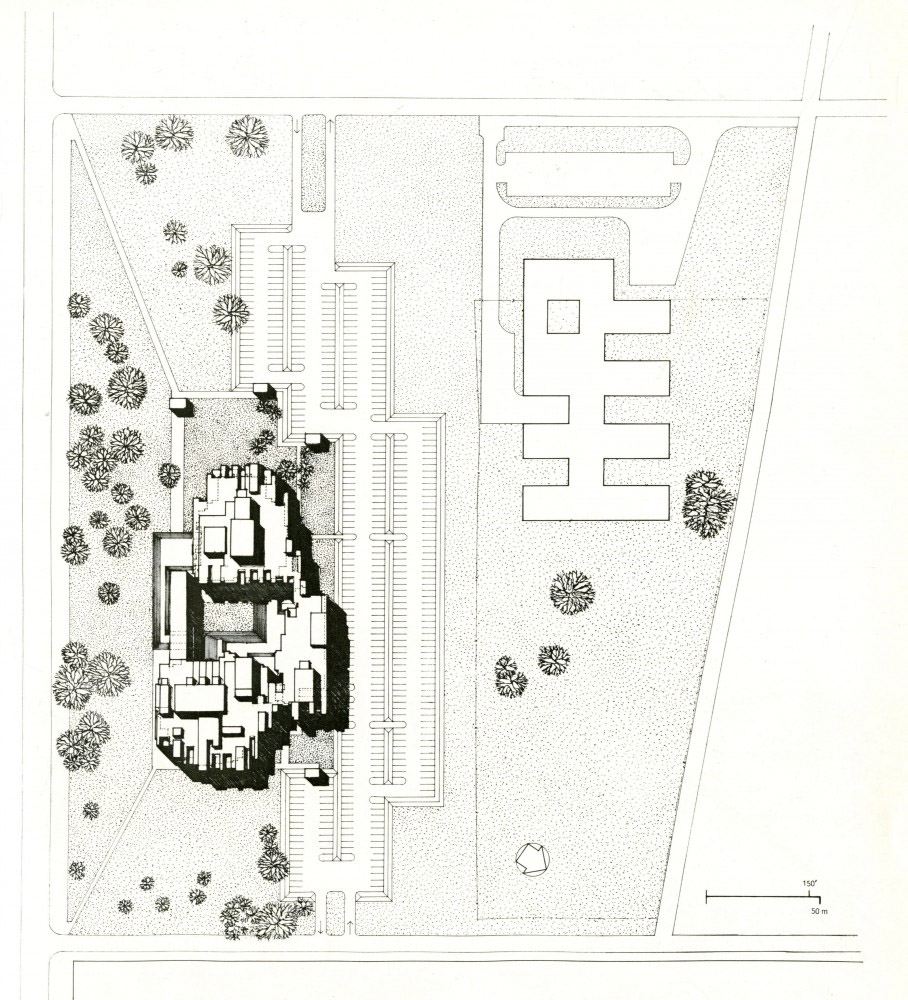 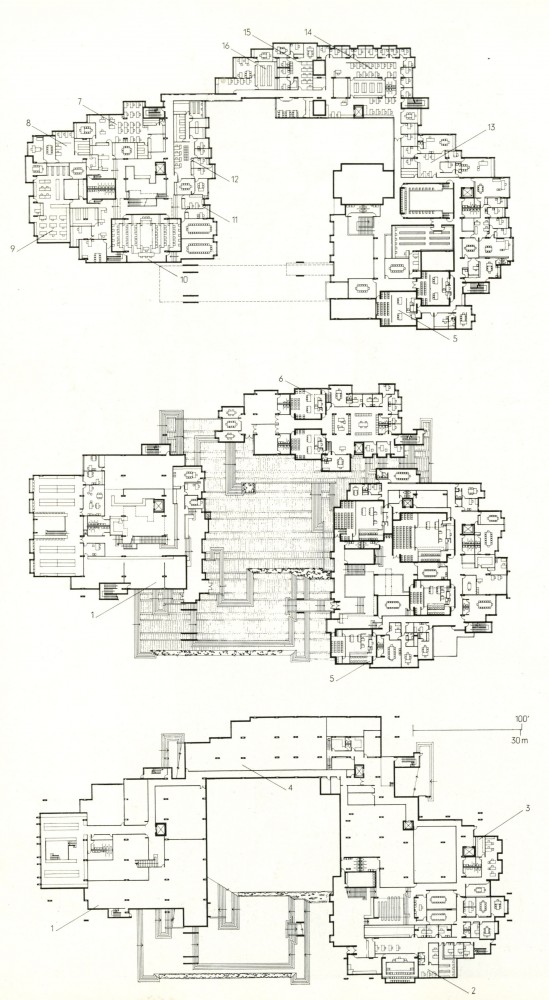 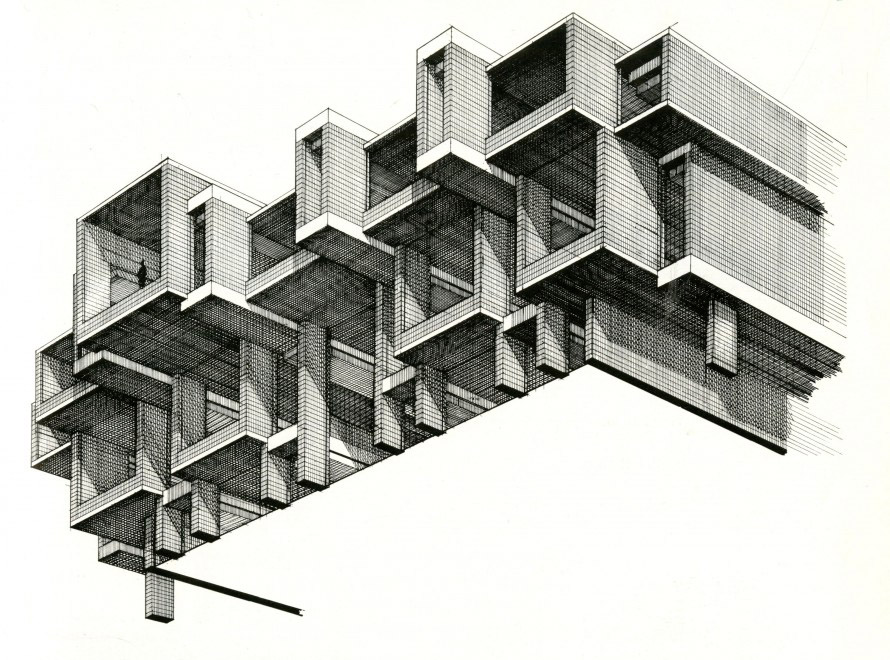 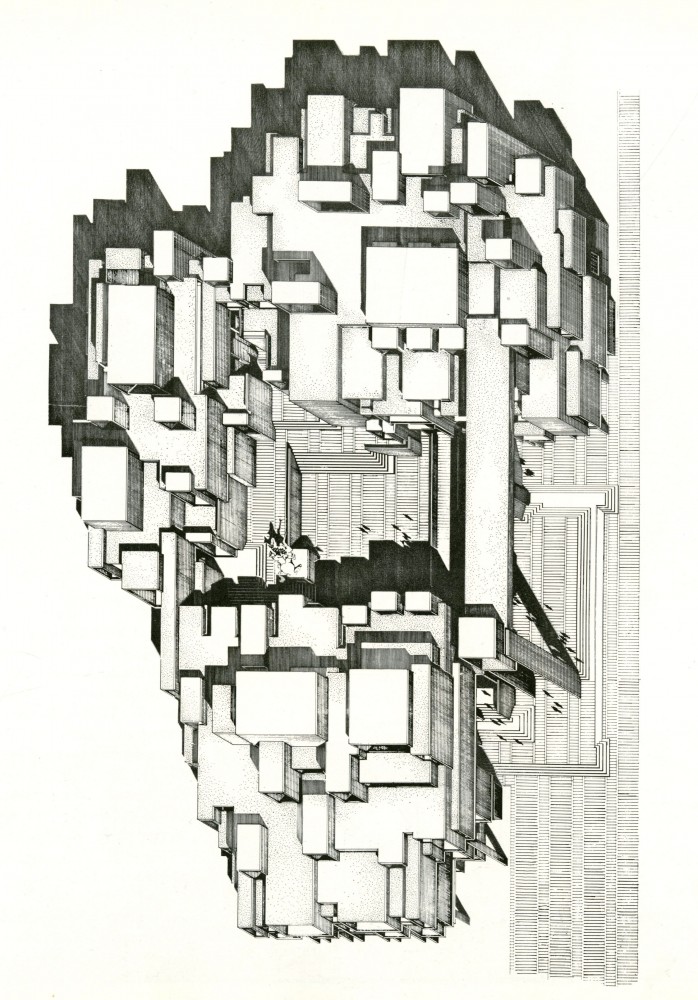 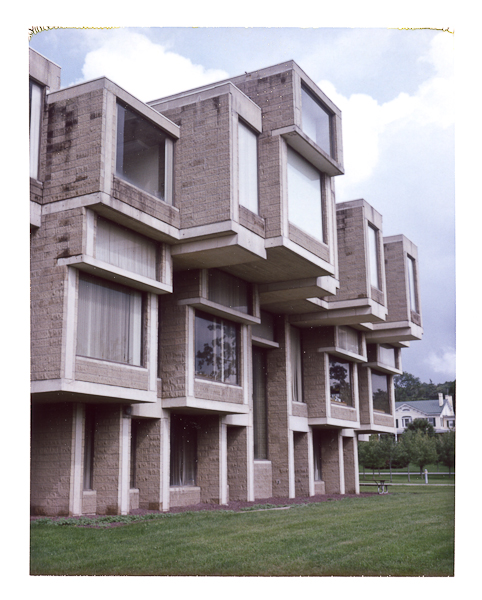 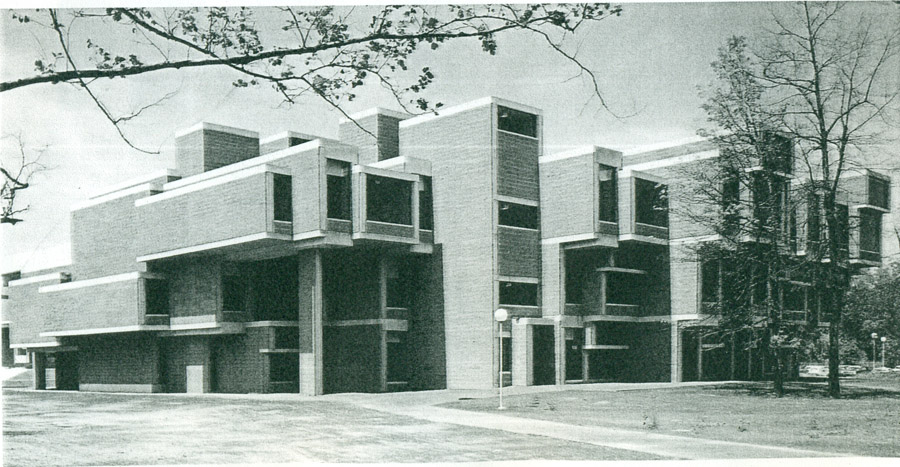 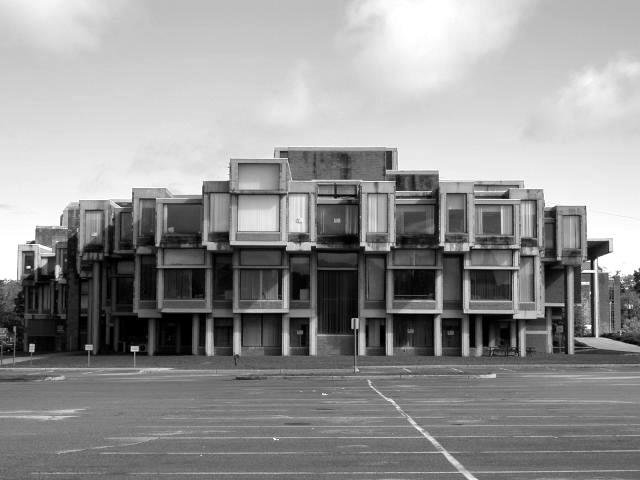 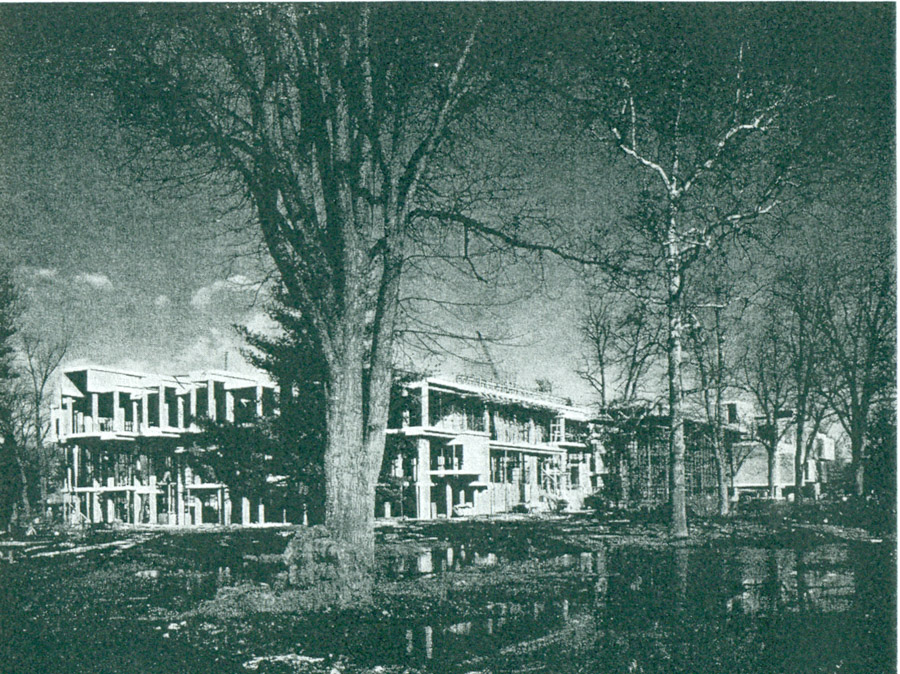 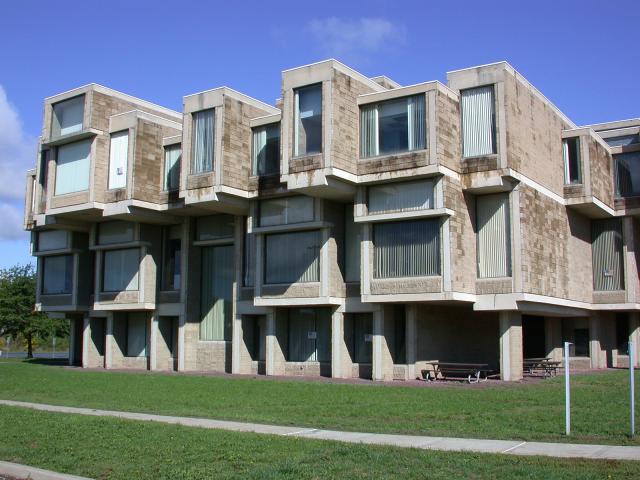 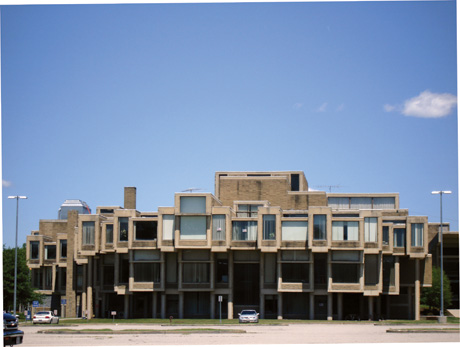 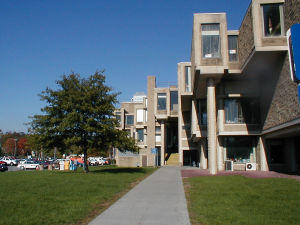 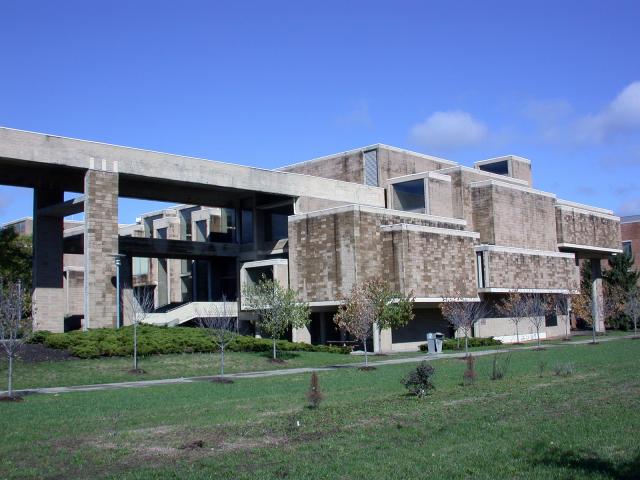 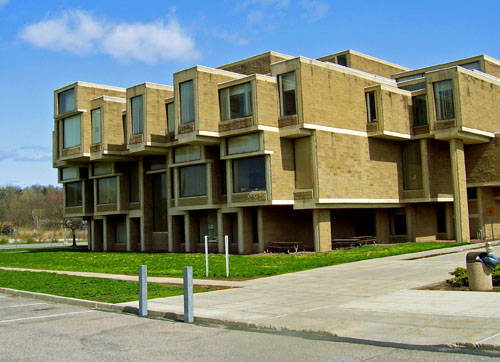 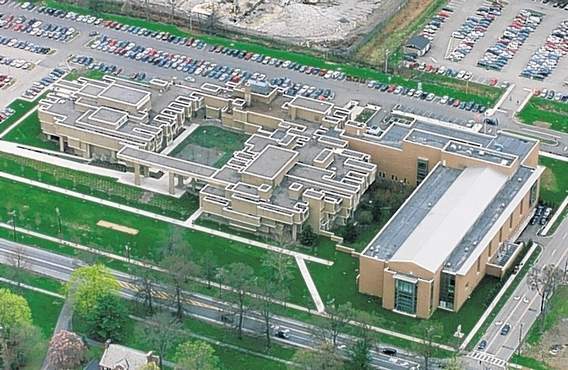 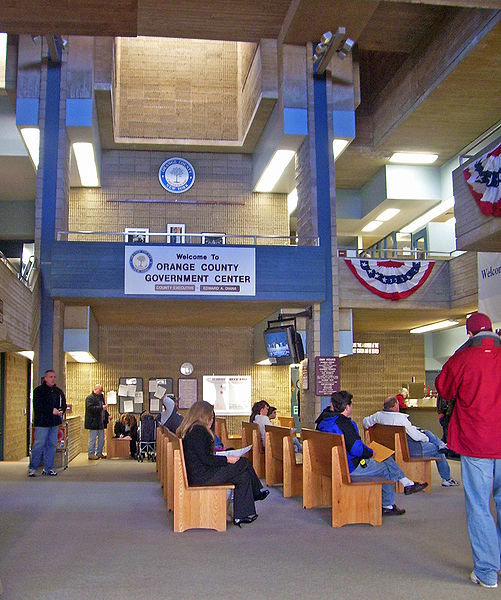 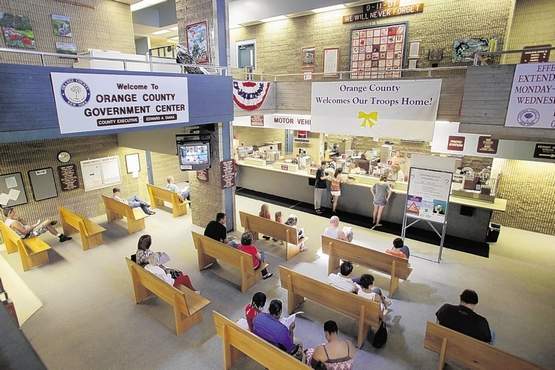