The building of the nursery school was the first project to develop a series of buildings that were planned for the area. At the time of the work the built environment was still uncertain. Therefore it was decided to refer the project respecting the natural environment that exists.

The project is located on a parcel located between Avenue of Alfonso Rodriguez Castelao and the promenade, in the district of Los Rosales, one of the housing estates that have recently expanded the city of A Coruña. Use the plot is assigned to the Public Educational Equipment and Facilities Public Welfare. The input data are the irregular shape of the plot, which adapts to the existing pre-existing (promenade that connects the gazebo with the boardwalk), with an area of ​​5,186 m2 and a steep slope towards the Paseo Marítimo (northwest orientation.

The building has ground floor enhancing the ecological value of the land, its magnificent views, minimizing the impact of construction and according to criteria of accessibility. Given the characteristics of the urban environment, with large open spaces and high-rise towers, aims to design a building that creates its own scale and protect itself. At the same time, diversification program advises Infant School wean functions, grouping whose development and is commonly used.

Therefore, the Infant School is conceived based on three separate volumes, interconnected by a large spaces of relationship and socialization. Access to the building is via two bodies through this facade.

The main volume corresponds to the classrooms, which are grouped based on the school functionality, age cycles. We have a first volume in which the classrooms of 0-3 years that complements discovered outside south-facing garden and develop; a second volume of shorter length in which classrooms 3-6 years develop, they are complemented with garden discovered linked to access the building and south protected from the prevailing winds in the area orientation; and a third volume in which collective school functions, which contains the kitchen, warehouse kitchen, dining room, multipurpose room, toilets core, general store, warehouse carts and develop facilities rooms with independent access from the outside. These three volumes are linked by a wide space in the area of ​​socialization, which configures the entrance hall of the building, and an administrative area consisting of reception, teachers and administration and management linked to access the building are located.

The architectural solution is developed with organizational clarity through rectangular and diaphanous shapes that allow easy understanding and greater flexibility.

As for the technical data of the project should be added that the structure is concrete columns and beams, where the bottom floor is self-supporting concrete slabs, and the top floor is of alveolar precast slab. The foundation consists of concrete footings. At this level the major complications arose land and subjecting such individuals to locate the building location, because after removing a first layer of fill almost two meters, we have a firm foundation of rock. By blasting precut and use of hydraulic hammer a cut was made in the hill to fit the building in the section of land.

The project prioritized the idea of ​​integration and respect nature around him and end up hugging the building, po facades that are arranged according to their orientation.

The opaque facades with few voids express the will of the building to protect the environment. He thought of the stone to create an outer skin of a natural material, in balance and respect for the environment. The stained glass are arranged perpendicular to the facade to create those feelings and emotions that houses a nursery, but not distort the image of the building inclusive from the look of the city. The building creates these two scales of assessment; respect for their location and expressiveness with its use.

Glazed fronts that allow the contemplation of the garden and a generous natural lighting, towards the promenade with northeast.

The building has a ventilated facade mounted on a wall of two sheets and insulated chamber. 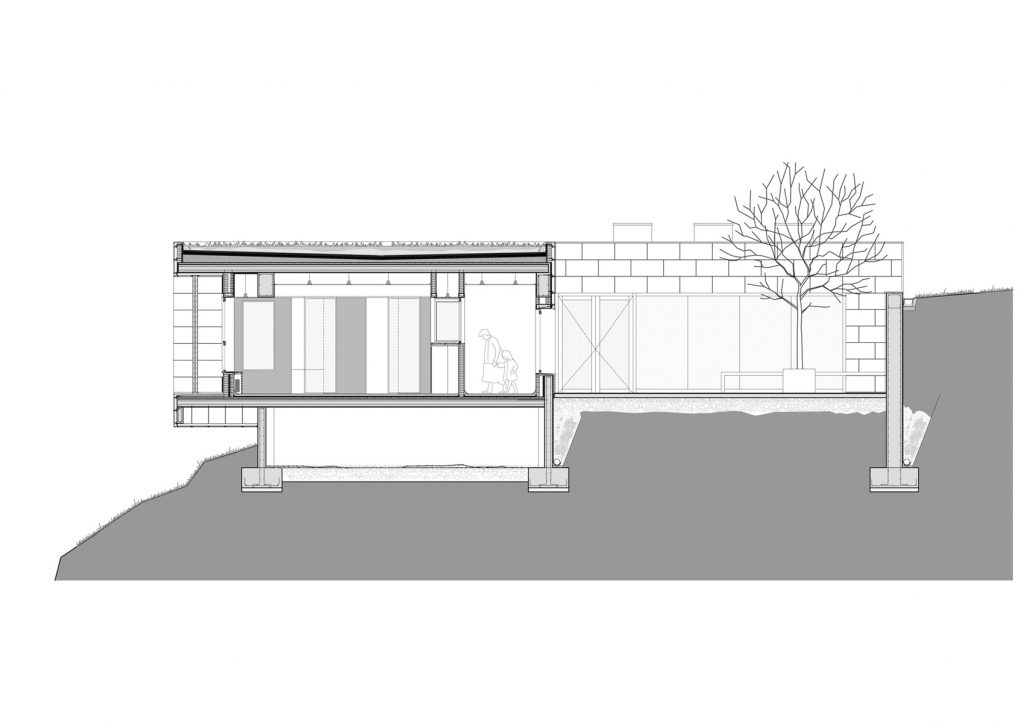 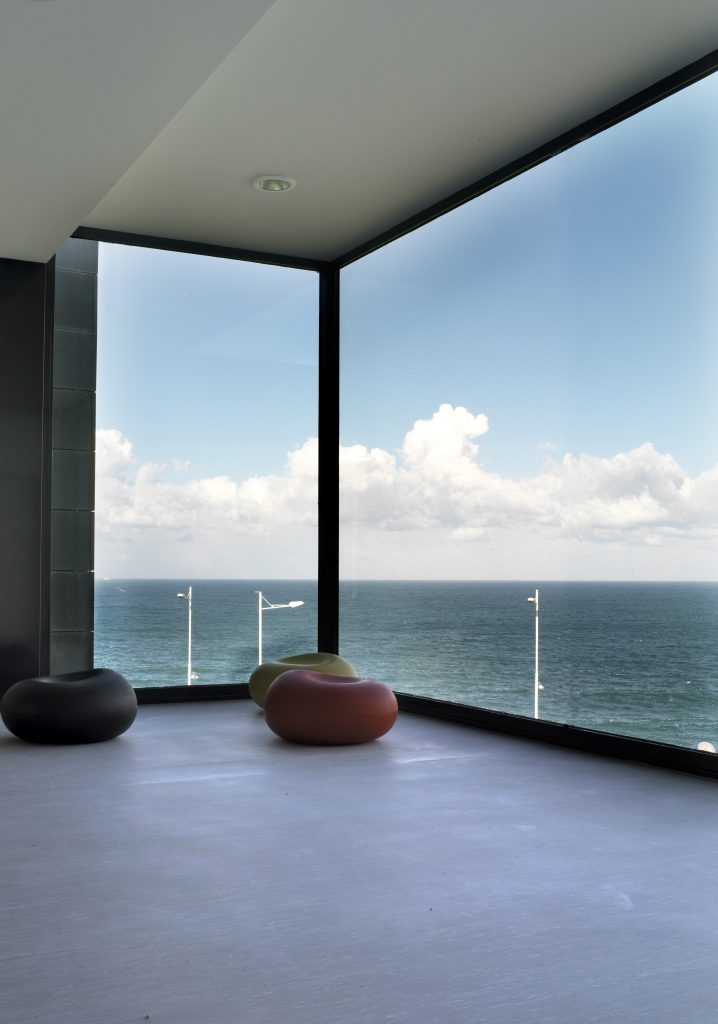 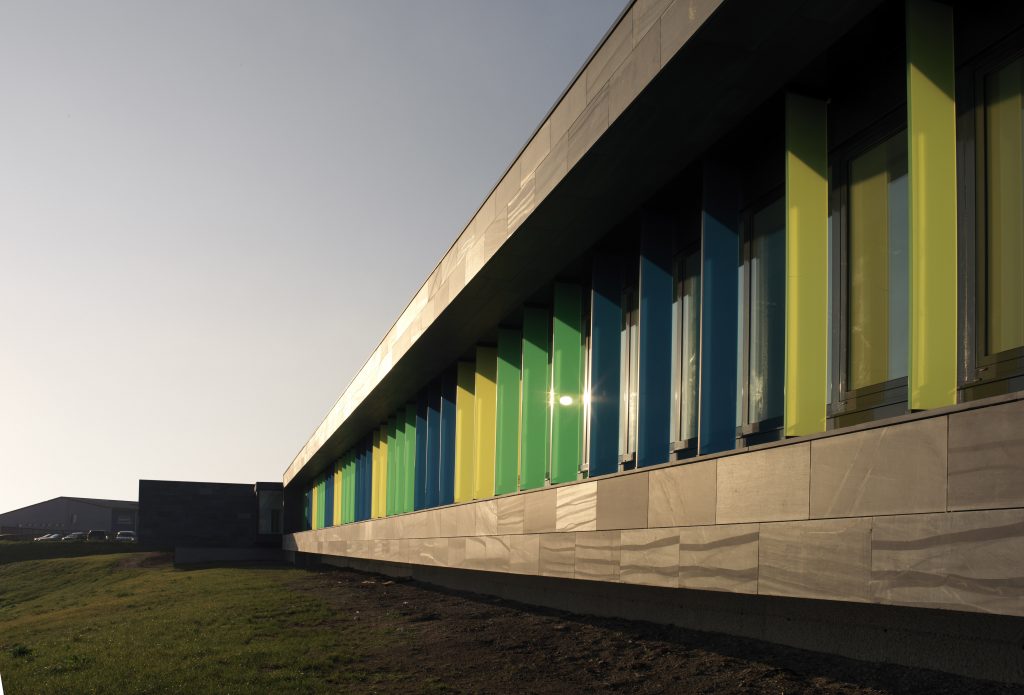 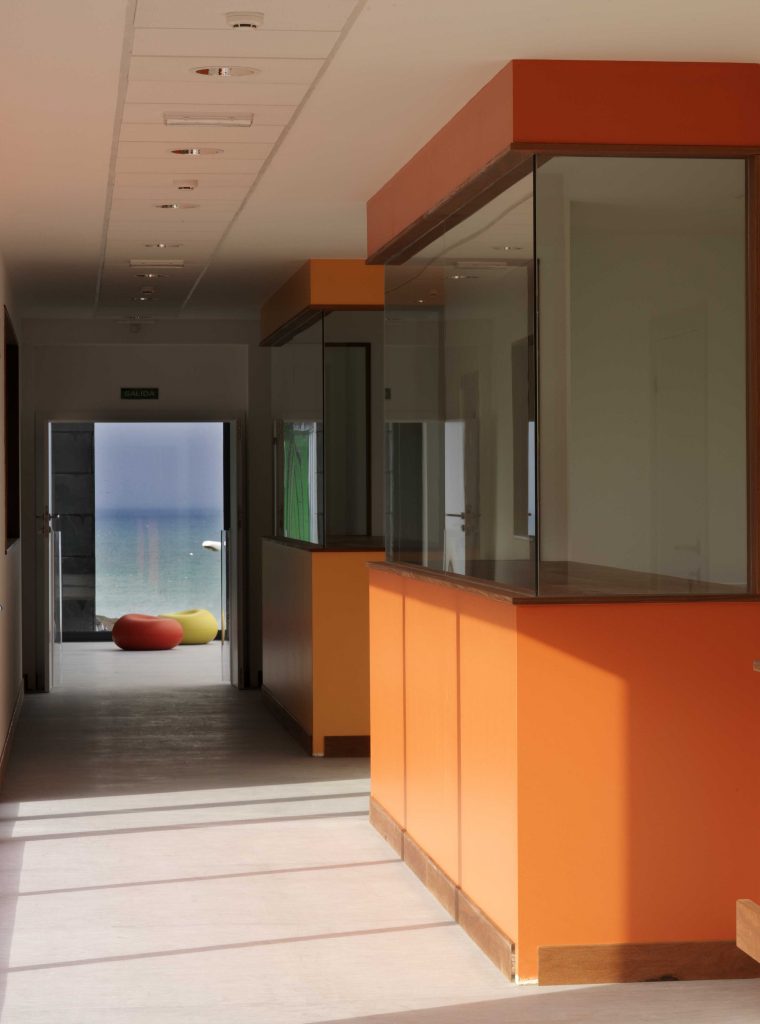 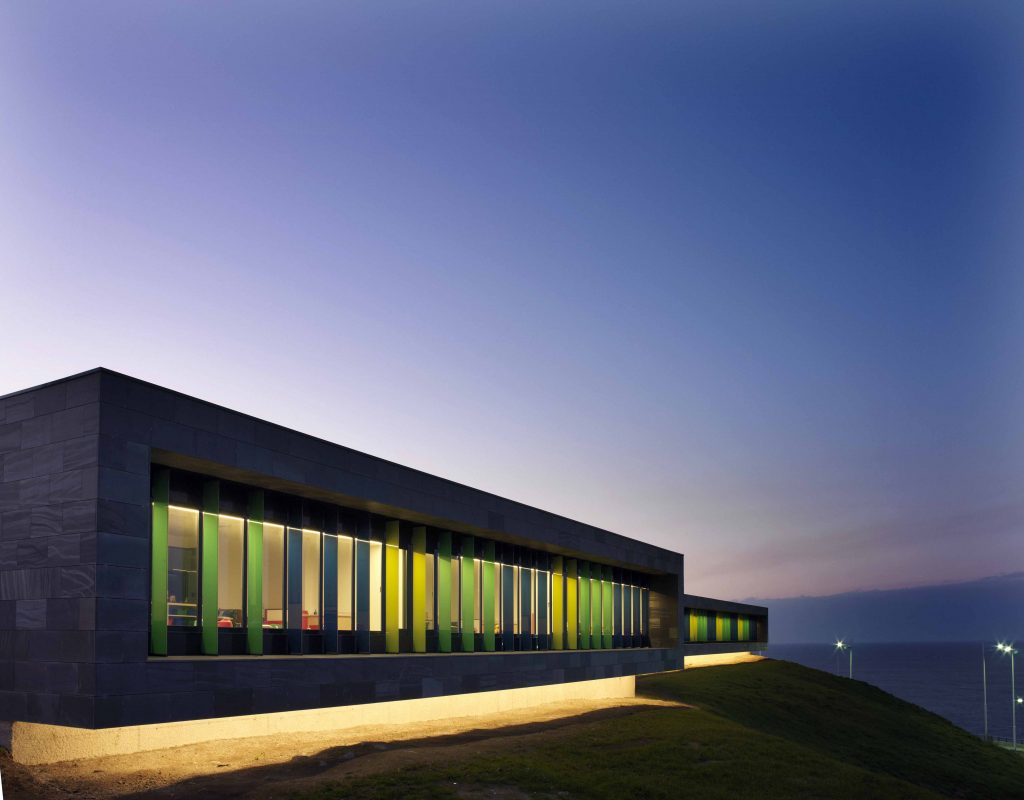 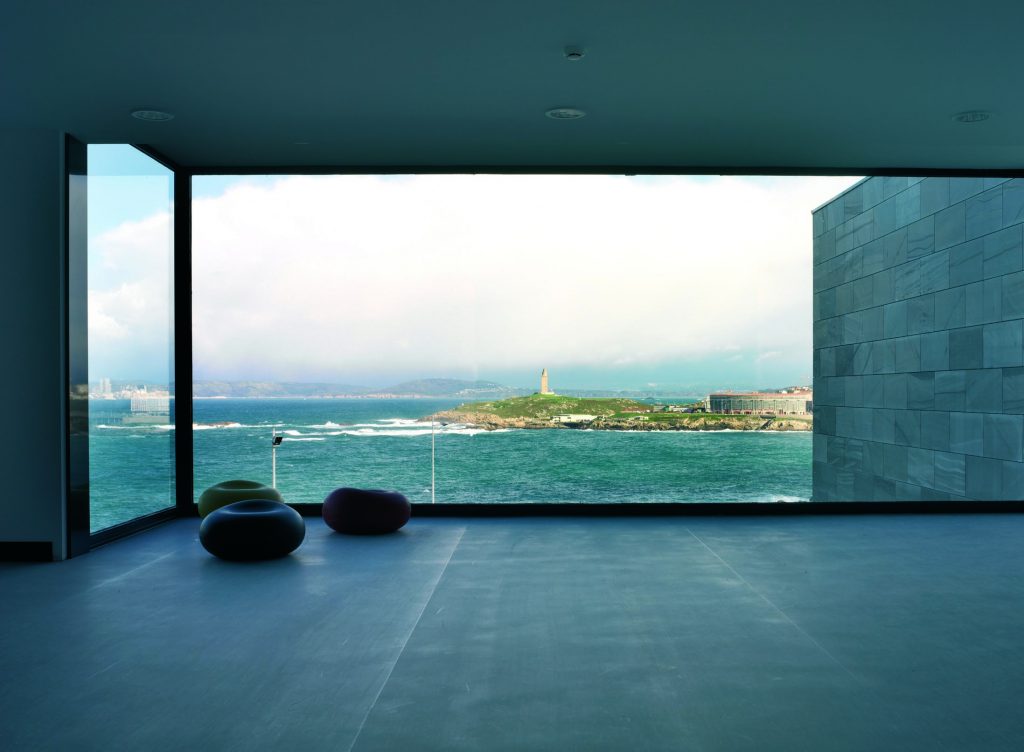 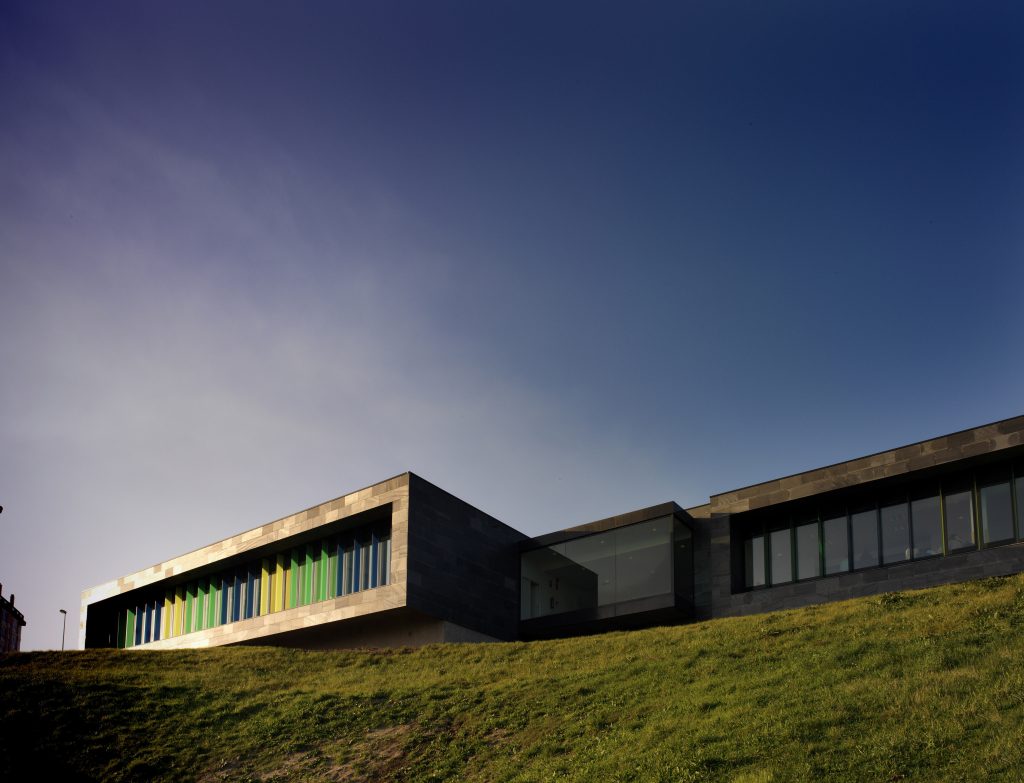