The new Polo Fair Milan is close to the urban center, one of the most important fairs in the world system, and one of the largest in Europe.

For the project of the new Fair and a contest was held in March 2005 was officially opened after 30 months of work and a week of meetings and events.

For the construction of hotels in this new project will be turned to an international competition, which involved large groups of architects and worldwide fame.
The contest ended in 2006 with the winning designer, Frenchman Dominique Perrault and the consortium with CCC Marcora Pessina Building and Construction SpA SpA The work was carried out using the self-contractual model of the “General Contractor”, subject to an agreement with individual civic responsibility in the planning, implementation and service, and a scheme which provides a clear contractual cooperation of risks and responsibilities.

Create an urban landscape as a unit recalificado. The park is the site representative and point of reference for the landscape with the lake, external spaces for galleries, hotels, shops and restaurants.
The center of the exhibition is conceived as a large cut of columns covered with glass and a garden center in Lombard and a fountain. While the conference room, Foyer Gallery, are distributed around the garden.
Gallery Glass is the backbone of the complex, protected climatically, connects all the revenues flags with the center of the show and all the services.
Access is organized in 3 revenue flexibility to achieve multiple exposures.

Constituted a system of flags that host a large exhibition of contemporary events. Through the flexible use of space and simplicity of access, the pavilions are connected to them through 3 buildings that receive and distribute reception flows of people.
The presence of the large central plaza opens new center of the show from the outside world, and allows the viewer to come into contact with impressive visual reception center, which closes the scenery of the square.
The search feature and an image of the state and functionality are reasons for this development.
The architecture becomes the medium and the instrument for the timely and proper definition of the text-context, in a project that puts so much as an adjustment of the margin of urban growth in the direction of the periphery.
An architecture that tends to affect the collective imagination, symbolizing the embrace of new technology and the desire for growth into the European and global picture of Italy, lombardy and the city of Milan.

The proposal is to achieve environmental improvements, and architectural quality of interaction with people.
Two parallel worlds, functioning coexist without causing injury and complement each other.
The income of the pavilions are PB at the same level of the restaurant, conference rooms and services in general.
These spaces are covered with a boulevard of 60 m wide and 1 km long. A large garden alternative energy, information, entertainment and relaxation, refers to the original tradition of the first show.
Its undulating profile expression generates energy, dynamism and lightness.

The New Pole Fair of Milan, a new space for the Metropolis Milanese was launched to be a city cop central areas recovering from the periphery.

Arose over an area of 2 million square meters, where for 40 years, from 1952 to 1992, operated one of the largest refineries in Italy. An area near the city and also a guideline on the road and the road of Sempione Malpensa International Airport, joining Milan in northern Europe.
So, a floor paved with slag and industrial pollutants have a new destination.

Flags of the project was devised by Massimiliano Fuksas, one of the most important architects at the international level in the study of urban problems of major metropolitan areas.

With regard to the parking lot of the 10,000 seats of cars was made by the architect Mario Bellini.

The project was designed to meet the demands of efficiency and functionality required for those working at the Fair, from exhibitors to the operators, and visitors.

The structure was designed to allow development of more contemporary events, also to generate diversity in the show and to encourage the large influx of people.

The new Milan Fair was provided with services that help to integrate with the surrounding area: The area is served by a coordinated system of parks, green areas and abundant large range of compatible features such as hotels, business structures for the time free, etc..

The parks have a lot of about 10,000 seats for cars attached to the exhibition hall, but another 10,000 made at a distance of 1.5 kilometers, the property belonging to the founding of the fair.

The exhibition pavilions around the park about 6 acres, nor. west of the complex, and an internal green with a total of around 180,000 m2.

Main features of the car: The first batch park for its unique features such as the technological and organizational solutions adopted:

functionality is guaranteed to channel traffic in a rational and easy to understand, for the flow of visitors, with the same purpose during the entry of vehicles parking individual, avoiding the formation of elbows, feasibility of access.

More than one car parking for each

With 2,500 seats and more than one every three to ground level by adding 1,000 positions along the central axis between the halls and 9 acres of parkland in the area nor.-east.

The architectural and landscape impact

All the work is developed through a principle of coherence: the project and the parking system testify the great attention to the quality of materials and the landscape.

The facades of the parking lined with a stainless steel mesh with symmetrical and regular provision of spaces confirmed the choice of principles and inspired innovation, functionality and gratitude.

The plan provides the winning creation of large green spaces in the domestic environment and the pole of the fair.

Including two large parks, an open-nor. the other to the west and south, including releases on the long west side of a green corridor.

A fleet of about 9 acres to come from north and west of the complex to the south, and a tour of the surrounding green exhibition halls, totaling some 180,000 m2 d green.

A system of hotels, galleries business structure to free time and so on.

Hotels: In the southern sector, integrated with the green of the park south-west, with a total of 37,500 m2.

Business: about 13,500 m2 area in north-east (between the eastern gate of the fair district and metropolitan stations and high-speed) and south, near the hotels.
Business functions located in the east and south are the starting point for greater flow of visitors using public transport, and also consistent with the position of the structure reception.
It will not be the major points of Representatives, where yields available information and materials related to organizations and institutions of the real Italian (local institutions, museums, art galleries, study center, etc.). 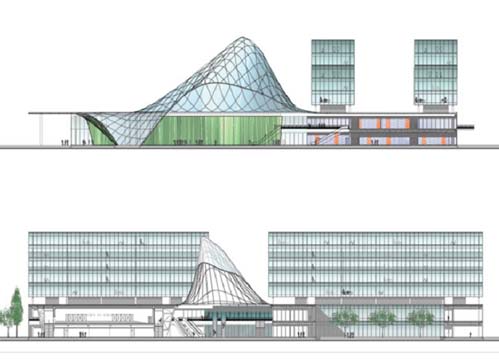 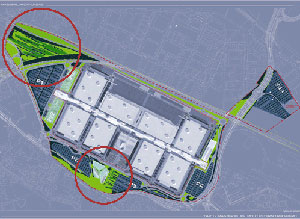 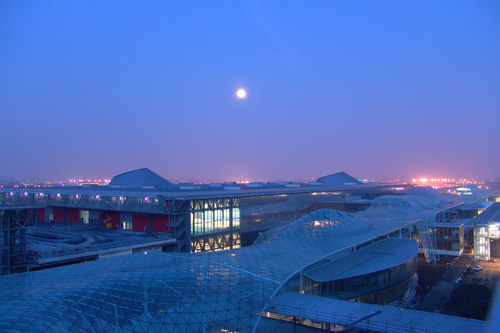 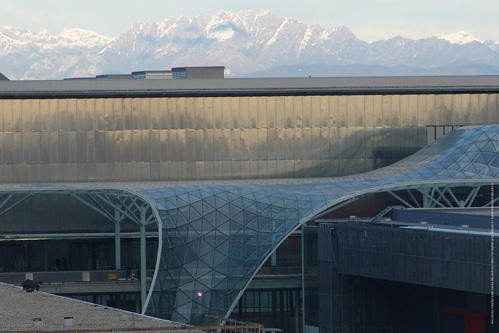 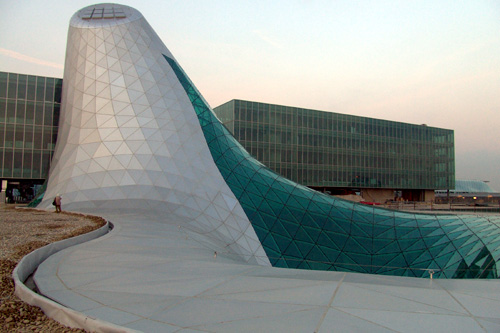 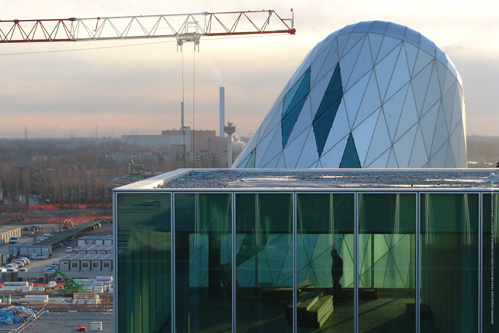 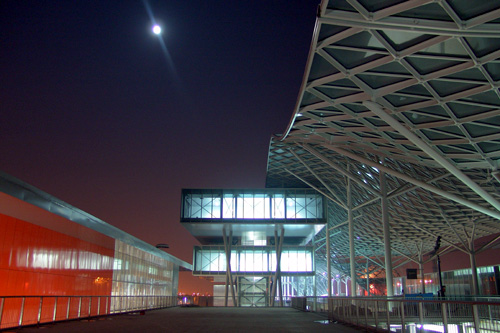 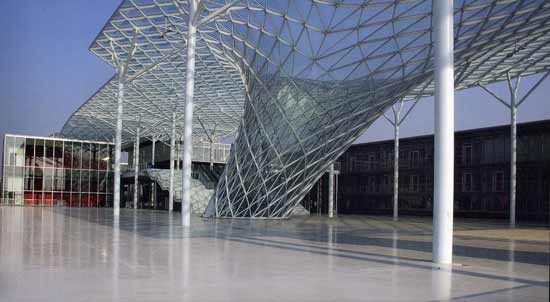 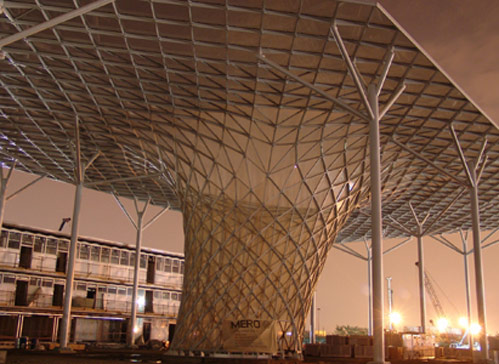 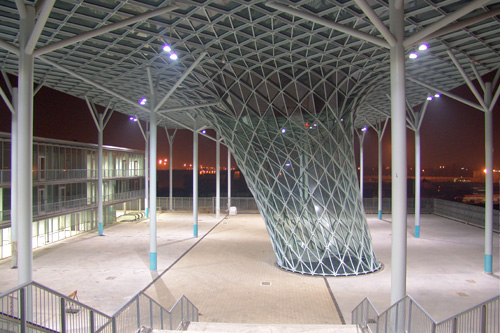 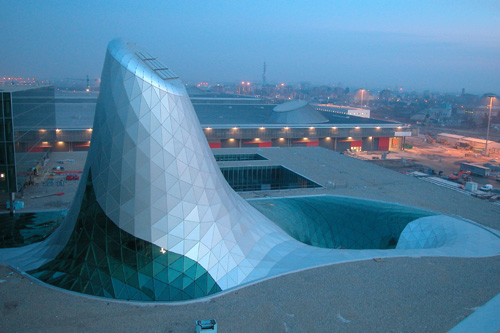 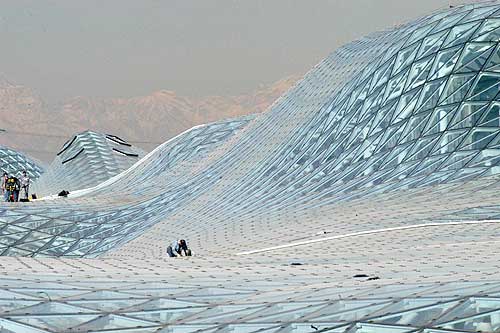 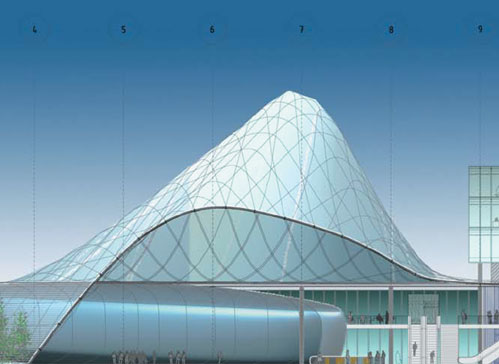 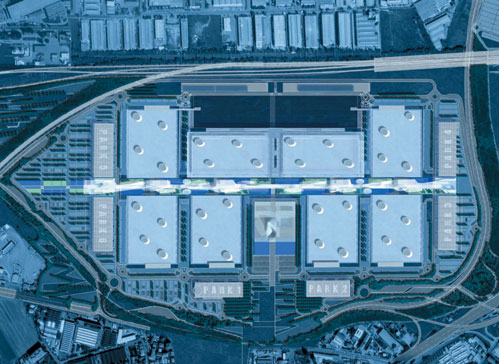 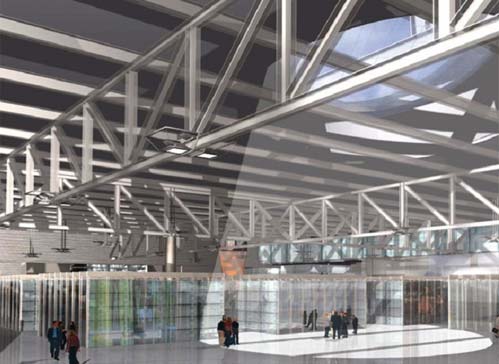 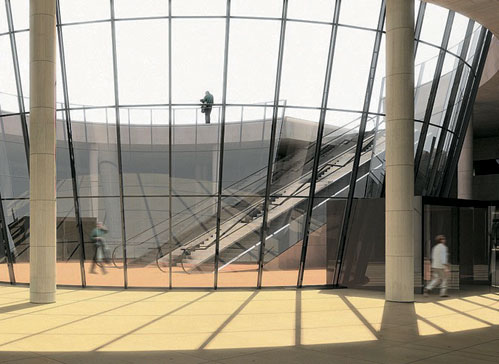 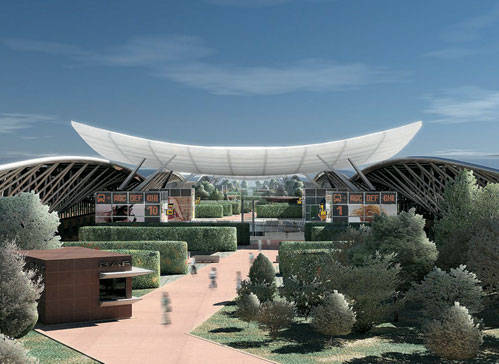 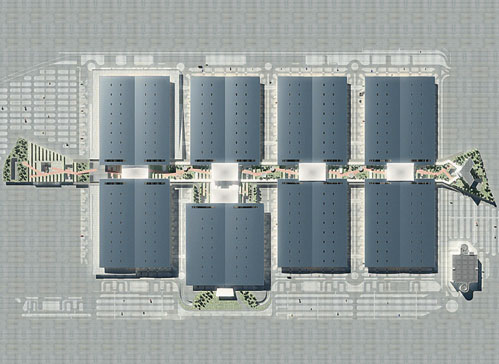 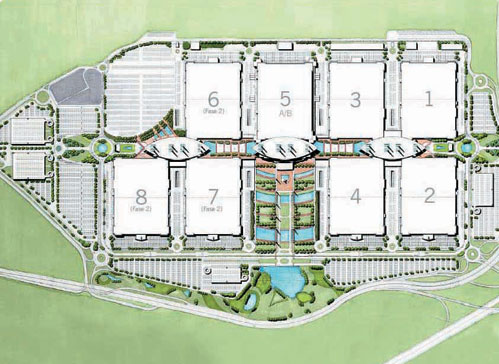 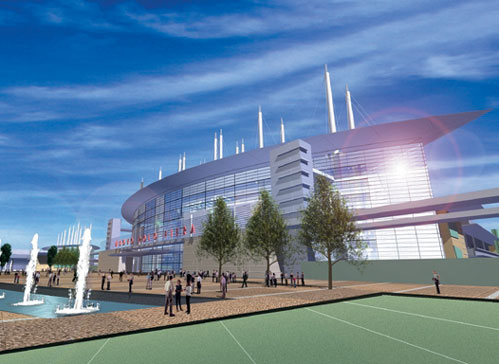 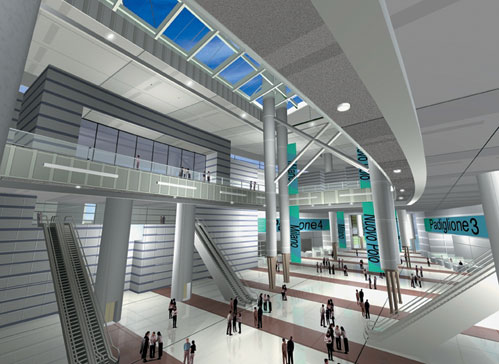 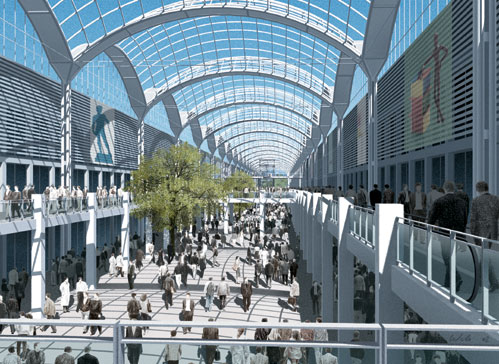 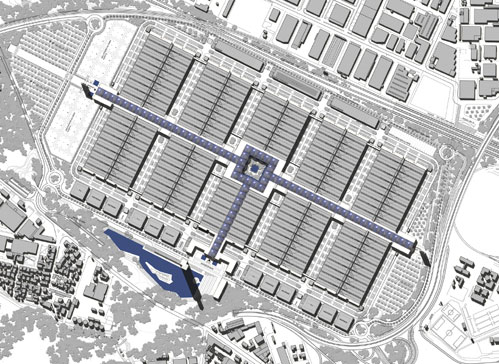