The Museum designed by the architect Sverre Fehn, winner of the Pritzker Prize in 1997, is the headquarters of the Ulltveit-Moe Climate Center. In 1989, Sverre Fehn began working on the design of the Norwegian Glacier Museum, which opened in 1991. In 2002, the museum decided to expand. The extension should host a new exhibition on climate change. For Sverre Fehn this was a great challenge. He had to alter the design of a building that he had already thought was complete. In the end, the extension was built around the existing cinema. Construction work began in autumn 2006. In July 2007, the Ulltveit-Moe Climate Center was inaugurated.

In 2016, the space designed by Fehn was renewed to include even more practical demonstrations and presentations of current events, such as What is global warming? What is a glacier? Or why is the fjord green?

The Museum is located in a meadow located at the head of the Fjaerlandsfjord Fjord, 7km from the Jostedalsbreen Glacier, within the National Park of the same name, the largest glacier on the European continent. The Museum is located in the town of Fjærland, in the municipality of Sogndal, Norway, cradled between two particularly accessible glaciers, Bøyabreen and Supphellebreen, to tell the story of the glaciers that created the fjords, becoming one more rock, left behind in The meadow thousands of years ago.

The Norwegian Glacier Museum opened in 1991 with the aim of collecting, developing and disseminating knowledge about glaciers and the climate. The concept of the museum is to convey the feeling of having been conceived by the glaciers that surround it and add to its history. The sense of place and belonging are present as if through its access you enter the glacier and your ice envelops you. Critics of the Norwegian Glacier Museum say it looks like an air raid shelter or a military bunker, but architect Sverre Fehn selected the rugged gray concrete to harmonize with the mountains and glaciers of Fjaerland.

The long entrance canopy suggests the long period of time necessary for these natural landscapes to form. With its triangular shape it extends in a narrow line creating the sensation of a great distance and moves steeply upwards when it meets the building, as if it were a glacier that slides down a mountain. Two stairs on each side of the entrance lead to the roof where you can see a beautiful view of the place. Small portholes and glazing strips peek through the heavy concrete, but on the right side, the glass planes rise slightly in the air like open cavities on the hillside. This provides magnificent views of the bar. The miter glass of the windows fractures sunlight like natural crystals.

The design that Fehn thought for the museum is based on the inspiration he achieves by observing the landscape. The architect thinks of a stone that comes down from the mountains and sits in the valley. To do this, he drew 3 axes that line the peaks of the nearby mountains and at the intersection he places the museum. To accentuate the sensation of walking under an ice cavern in the center of the museum, place a skylight that allows the passage of the dim Nordic light and that gets smaller as the visitor enters the end of the corridor.

Fehn has often commented that the immensity of the site makes any structure unimportant, his ambition was to create a place between heaven and earth. Thus, the concept for the museum was developed as a concrete plinth seated on the ground from which the visitor can experience the great space around him.

Fehn graduated from the Oslo School of Architecture in 1949, where he received the influence of Norwegian modernist architect Arne Korsmo. He practiced with the French designer Jean Prouvé experiencing first-hand European modernism of the 1950s when Le Corbusier was at the height of his own career. The architect Andrew Todd writes that Fehn “managed to find a path between the opposing dogmas of high technology and the brutalism that these two figures came to represent, instead distilling the poetics of the construction of Prouvé and the concern for the primitive of Le Corbusier “.

Fehn’s angular design for the museum maximizes space with geometric shapes such as the triangular entrance canopy or the stairs that lead to the rooftop gazebo. The long entrance takes the visitor to the indoor exhibition spaces or climbs the stairs to an outdoor observation platform. The canopy is triangular, while the exhibition area is circular.

The architect skillfully turns the roof of the museum into a public space, hinting at the idea that one “climbs the rock” to have a better view. The entry sequence resembles hiking on the glacier. You can take the stairs to the roof, the hike on the top of the glacier, or you can take a cave-like entrance to see the exhibits, walk below the glacier through a tube.

On one side of the Glacier Museum, a round chamber houses the Ulltveit-Moe Climate Center, an addition designed by Fehn that opened in 2007. Visitors to the Center can witness climatic changes since the creation of the Earth and can see the devastating effects of global warming.

When accepting the Pritzker Prize for this work, Fehn commented: “… The globe is divided into degrees of longitude and latitude and each crossing point has its climate, its plants and its winds. As an architect, I must try to understand the difference of the life at every point. ”

Immediately inside the cave-shaped entrance, a sculpture that talks about the temporality of glaciers stops visitors. While the Glacier Museum is built like a rock, which remains in the meadow for thousands of years, glacial ice is contrasted with a piece of eroded granite that alludes to the constant that envelops us all, the change. Inside, the roof, the edges and the skylights are very topological, as if they took the shape of the configuration of the bottom of the glacier against the rock. In some cases, the wall meets the roof at right angles. The central skylight plunges into space and then recedes into the glacial tongue display.

The coffee opens to the landscape, with its glass curtain walls that contrast with the concrete body, breaking the central axis as if it were an opening in the lower part of the glacier, similar to the caves that carry the thawing water to the rivers fed by glaciers at the foot of the mountains.

The architect used blocks of rough gray concrete to harmonize with the mountains and glaciers of the Fjaerland and resistant and miter glass in some windows to mimic the color and texture of the mountains that are reflected in them.

“… But the great museum is the world itself …”, Fehn said. “… On the surface of the earth, lost objects are preserved. The sea and the sand are the great masters of conservation and make the journey to eternity so slow that we still find in these patterns the key to the birth of our culture…”. 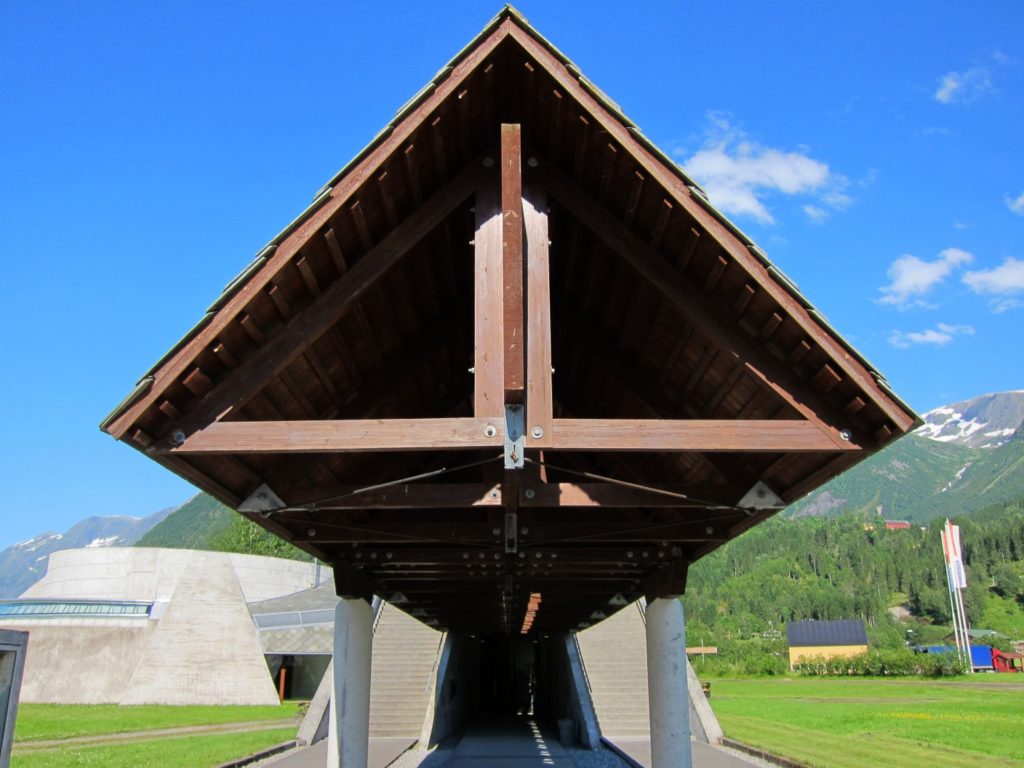 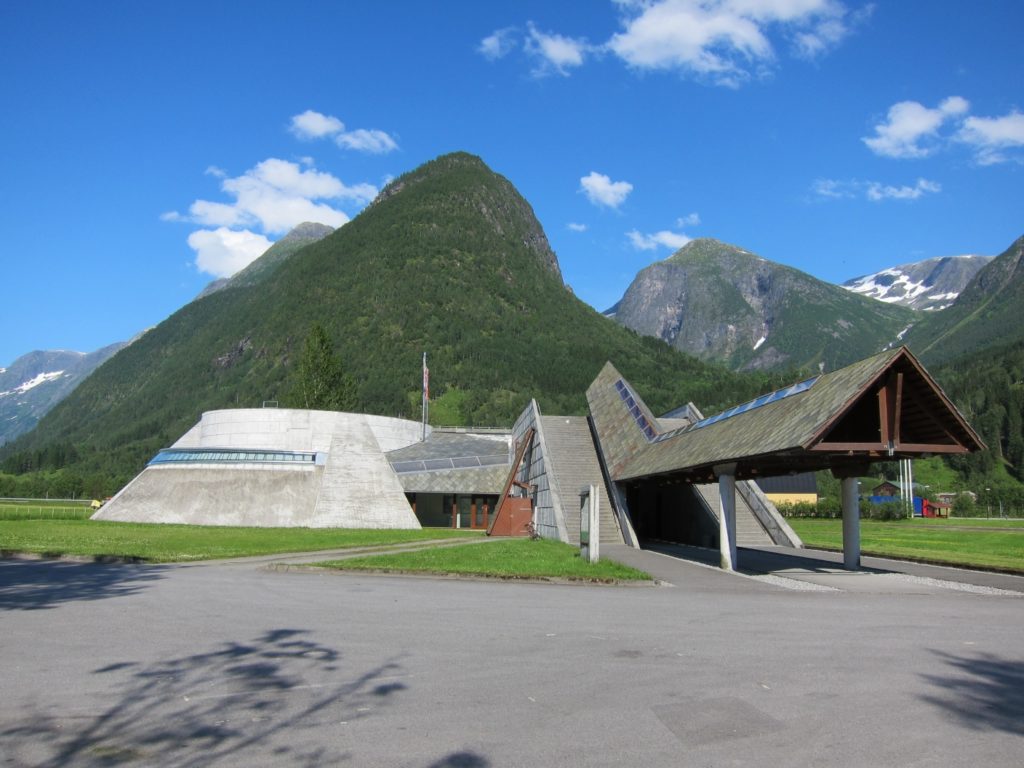 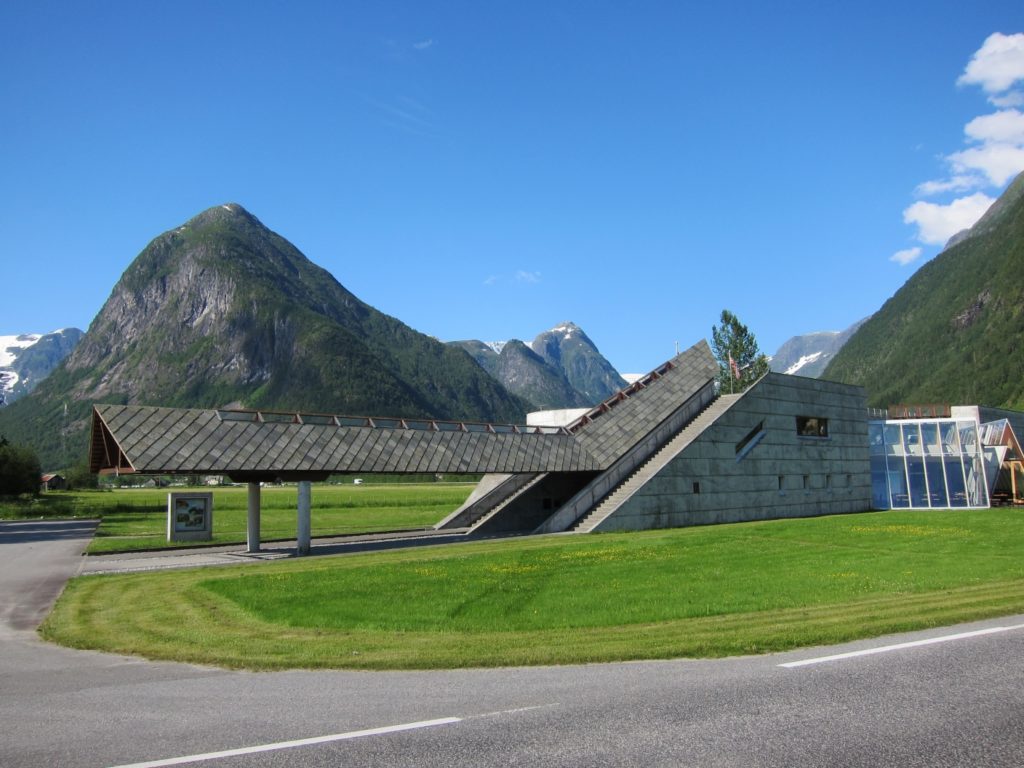 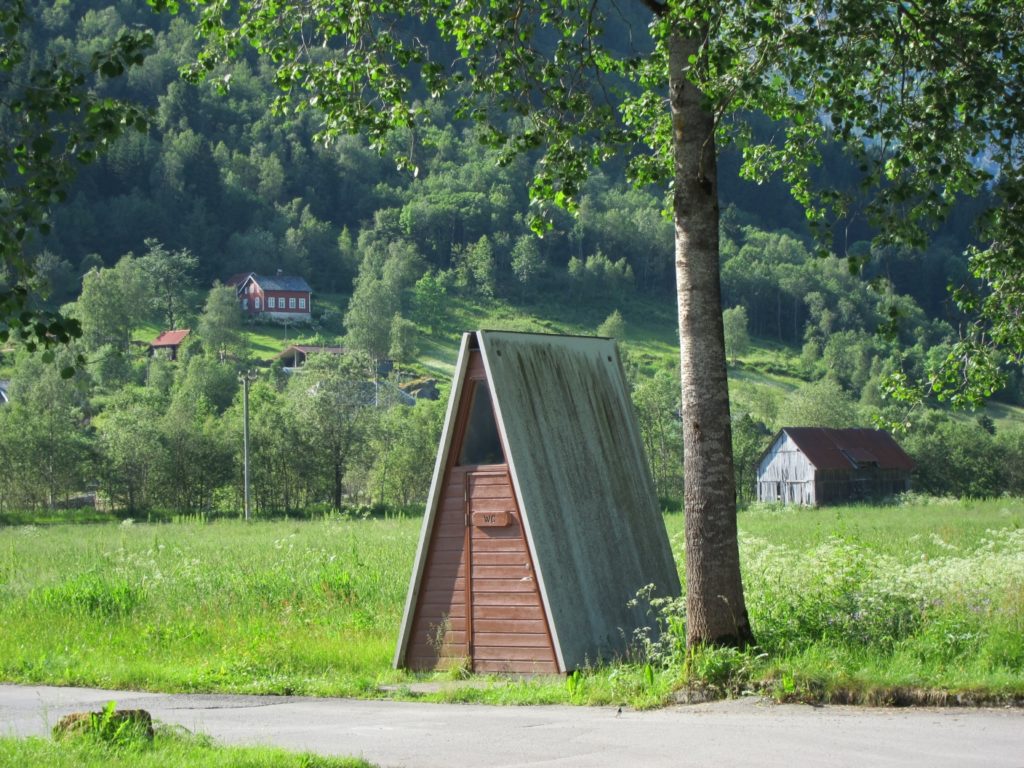 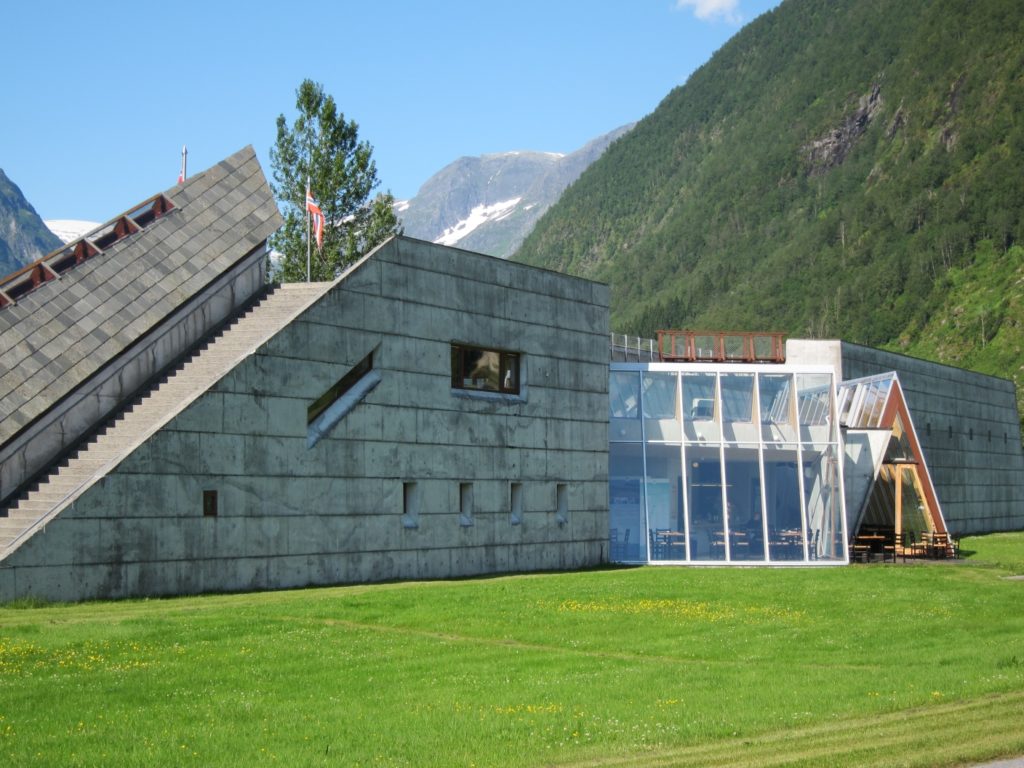 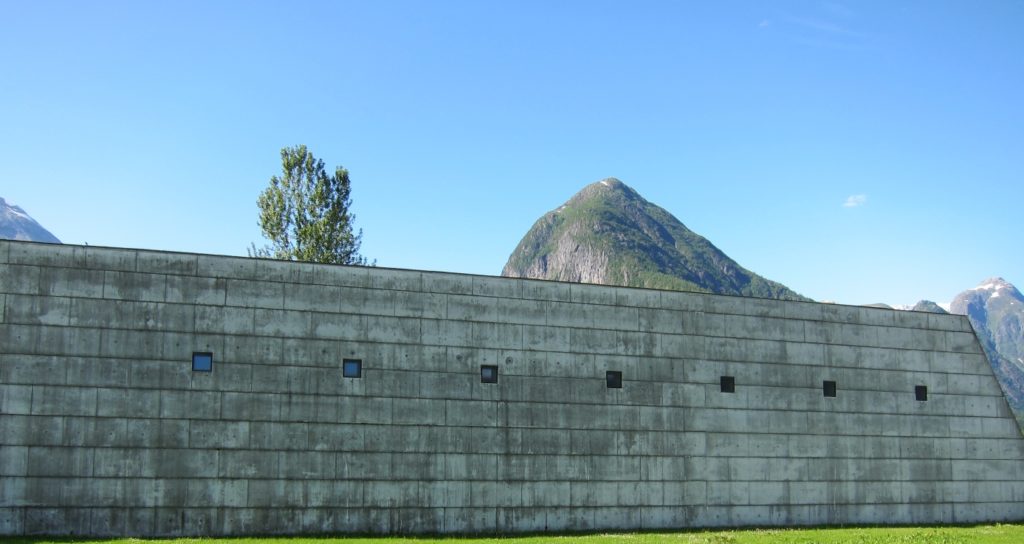 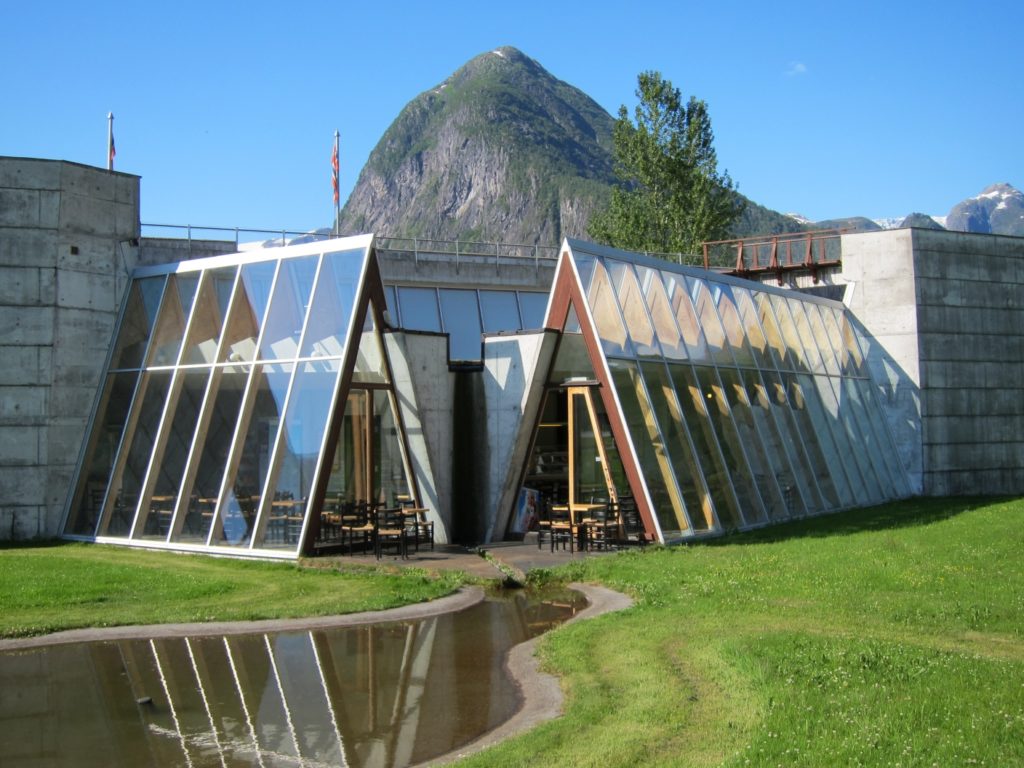 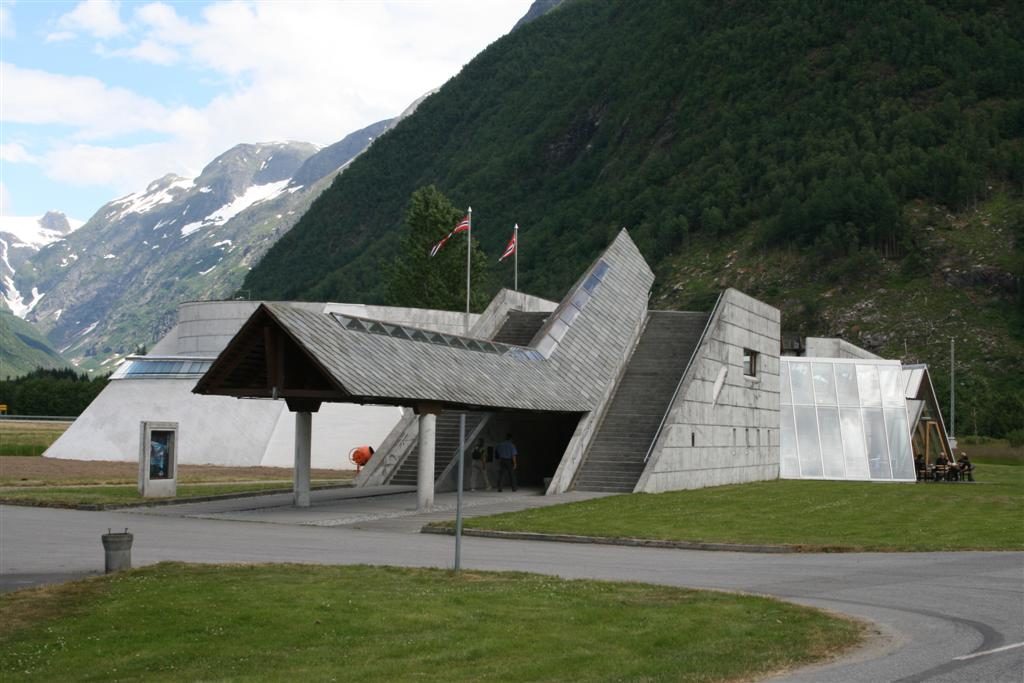 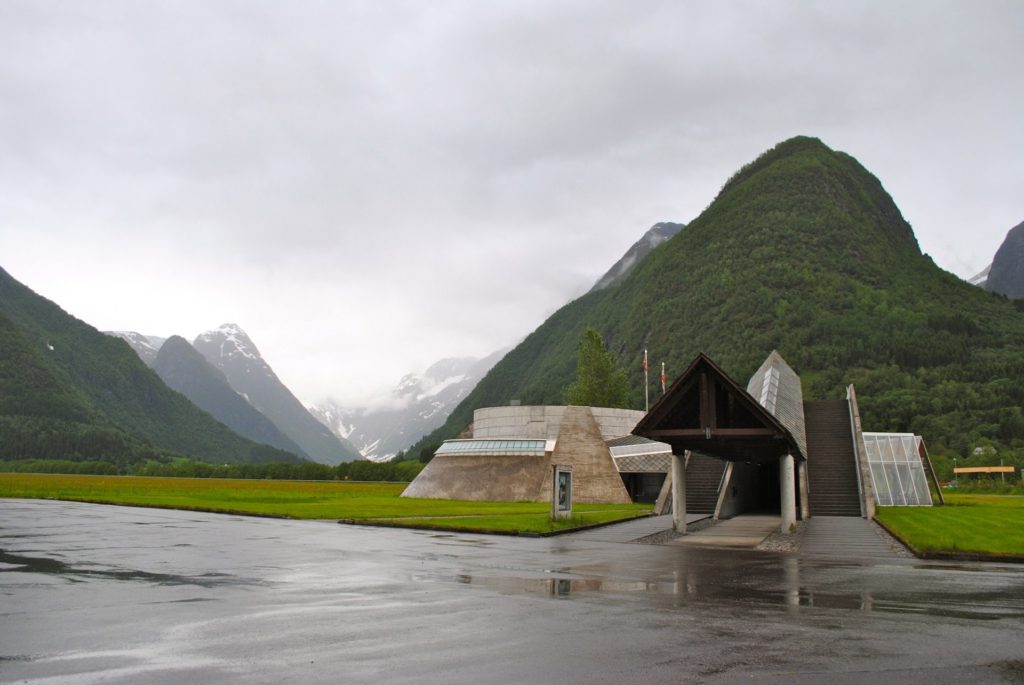 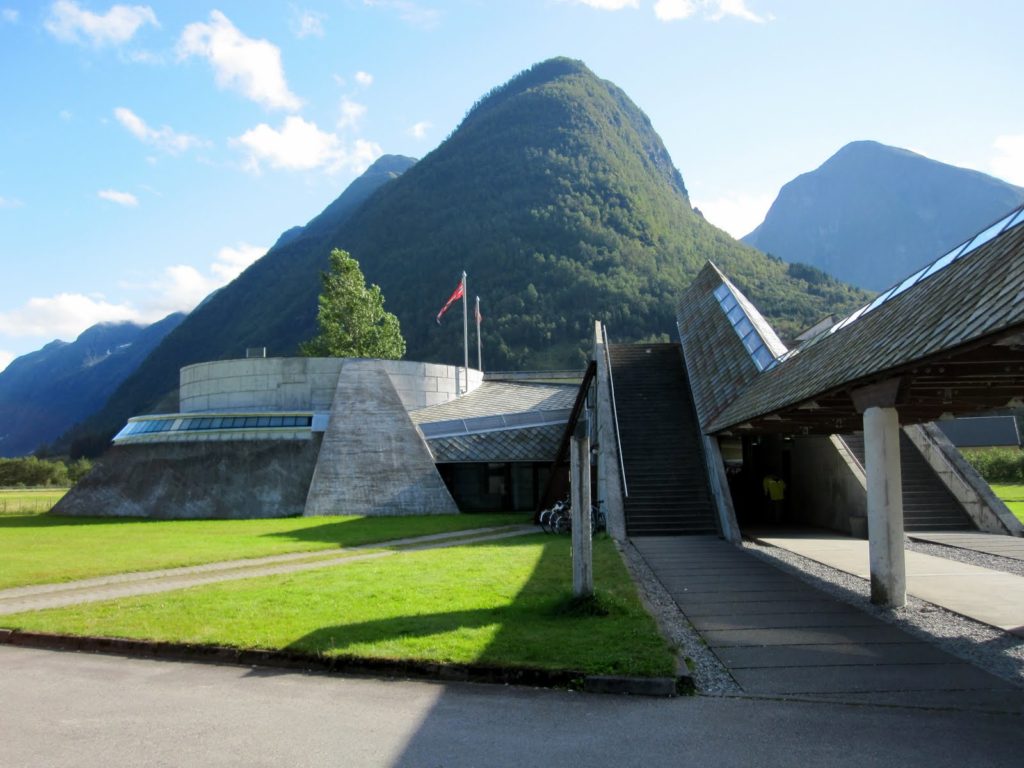 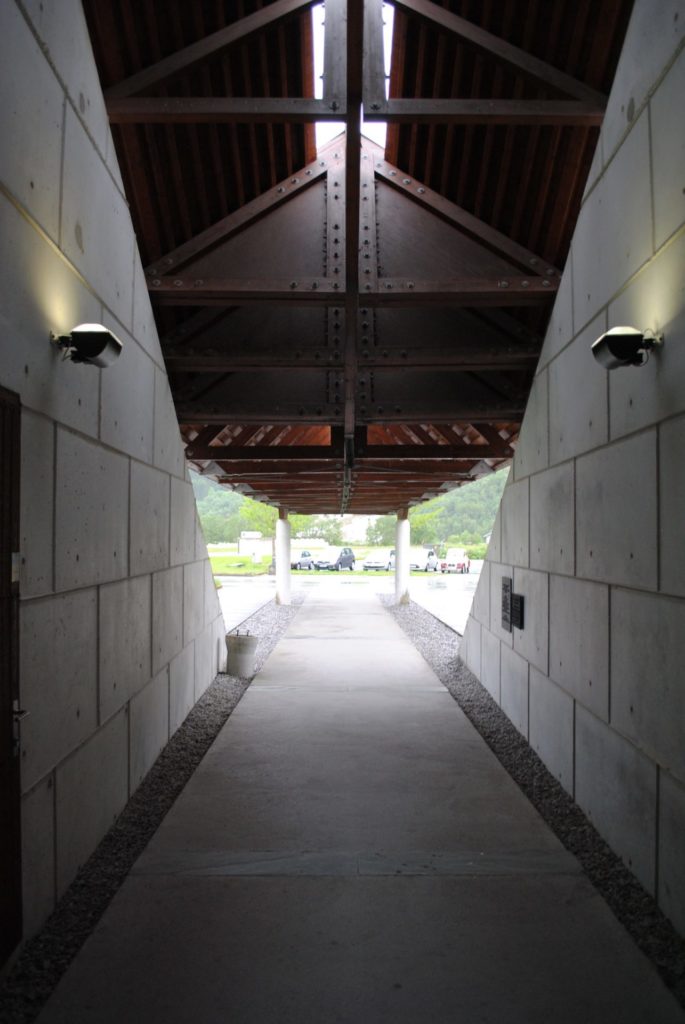 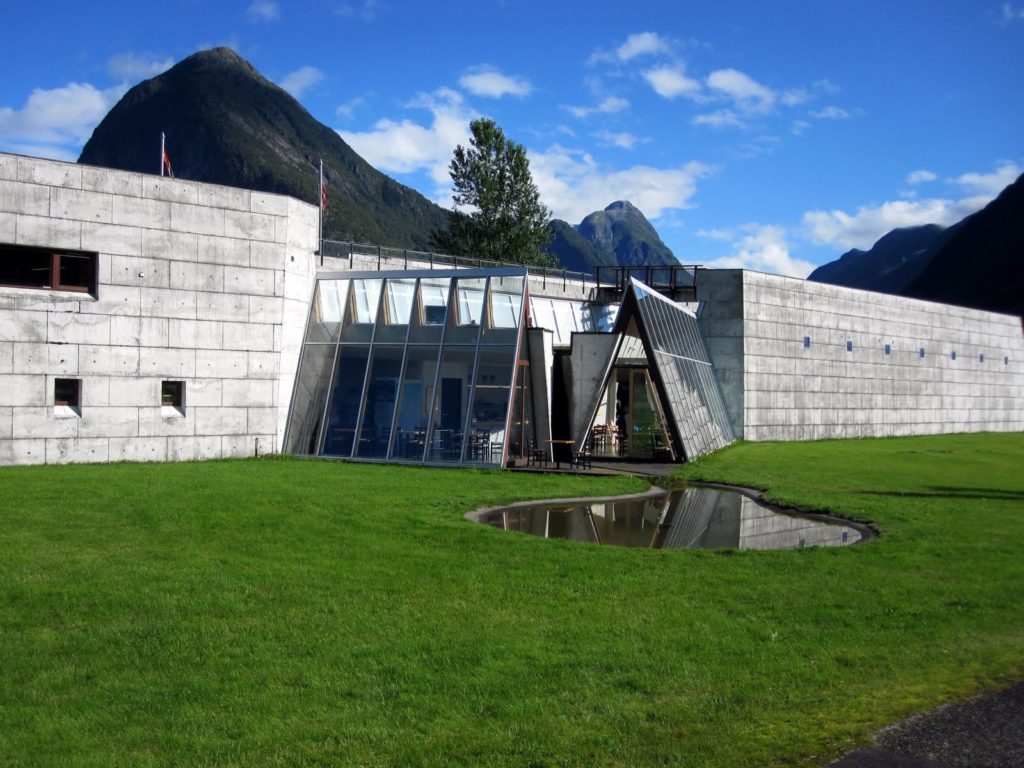 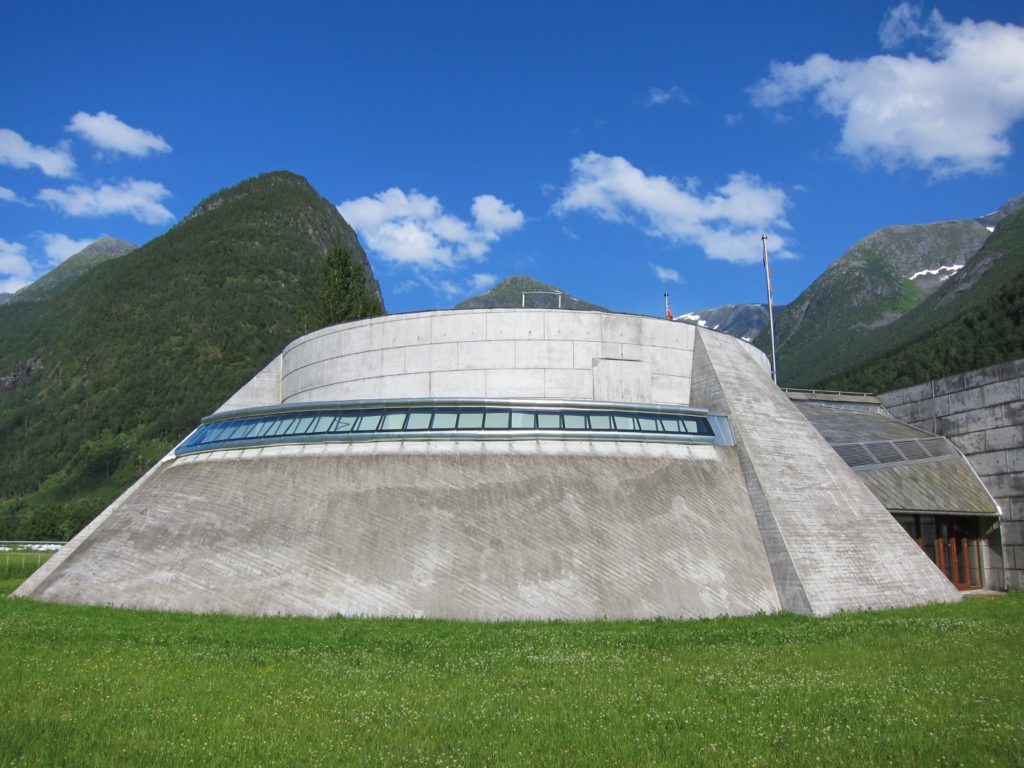