The building’s architect Wang Shu is a huge asymmetrical construction which can not remain indifferent to whoever observes. With its 144 meters long, 65 wide and 24 high, by far its forms deceive the eye and defy logic, close the merger between front lines and traditional materials is appreciated.

The main screen of Ningbo Museum refers to traditional historical customs in Ningbo area. Designed by architect Wang Shu, who in 2012 won the Pritzker Architecture Prize, for his “exemplary cultural continuity and the vigor with which he has recovered the tradition” in the words of Qian Lu, director of the museum. The building, in 2009, was awarded the Lu Ban, the most important of China in Architecture Award.

The Museum is the symbol of the culture of Ningbo. It is a comprehensive museum with geographic, showing the history and the arts.

The Ningbo Museum, was raised in an isolated plain, in the city of the same name, in the eastern province of Zhejiang, east of China.

Located on the east coast of China, Ningbo is a historical and cultural city with 7000 years of civilization and history 1200. The city of Ningbo is connected to Shanghai road through the world’s longest bridge over the sea, also the Chinese bullet train connecting the two cities.

In the design concept, the architect Wang Shu combined hard mountain landscape with the softness of the water and the ocean, watching the important role the East China Sea has played in the history of Ningbo and integrating housing characteristics of Jiangnan with tiles and bamboo decorations.

The appearance of the building derives not only from the hill and valley, but also includes several minor changes of inclination that takes visitors to associate the building with space and scale of the traditional villages of Ningbo, 1:01.

The building, which begins to lean on the second floor, has the shape of a mountain, but also a boat. The first refers to the existing landform in Ningbo, the second highlights the importance of maritime trade throughout the history of the place, making the museum a symbol of the history and culture of Ningbo.

Museum exterior walls are decorated in various ways, according to the requirements of structural mechanics and taking account of 23.95 meters:

• collected millions of tiles around common decoration in economic construction of houses in the old days in Ningbo, CUNADO still had not introduced the concrete.

• other walls are covered with cement mixed with bamboo, whose imprint is visible in the gray walls of the building and highlighting the importance of the architect granted to nature, “….we seek perfection in construction, but in feelings causing…. “(Wang Shu)

Do not stop calling attention to the many windows of the main facade, with rectangular shapes and various measures, placed in an apparent disorder.

The main entrance, with its cobbled streets, surrounded by a shallow river. This is a symbol of Ta Shanyan which was built during the Tang Dynasty as a facility for water conservation and recovered by Wang Shu. Tuoshanyan is the first ancient cultural heritage located, symbolizes the historical point.

The Museum of the History of Ningbo, with its 30,000 m2, is an exhibition in itself, its walls, materials and character make the visitor to delight in contemplation. As exhibition space has three main galleries, spread over three floors.

Among its galleries include:

This gallery is the heart of the museum. It tells the story of the city, its evolution is shown from the past to the present time or geographical openness to the world, and through the Asian route “Martin Silk Road”.

Here a lot of collections related to the cultural “folklore” of the place are exposed, like people of the area lived on the threshold of the twentieth century.

This gallery shows the bamboo carving skills during the Ming and Qing dynasty.

The main structure is made of steel and reinforced concrete, in some sections of large prestressed concrete was used. The change in shape is determined by the limitations of overhead structural beams and columns are placed with a single discipline, optimized structural design, reducing costs and speeding up the construction process. The concrete formwork has been made with bamboo.

The floor of the building has been assembled in order to reduce as much as possible the occupation of the land and to free more landscape.

In the building itself, traditional methods of Chinese architecture, combining them with methods and latest technologies, making the museum a “statement” in itself. The memory of the city is in your walls, in the millions of tiles that cover its outer skin, the orange tiles that covered their roofs and tell their story.

On the outer wall were used lots of traditional bricks, tiles and recycled tiles, reflecting the trend of building sustainable and fusion between ecology and culture. A lot of these materials comes from the scrapping of old buildings, in response to the phenomenon of deconstruction and massive construction in the urbanization process in China.

The gray conglomerate of the facade, with orange splashes, was prepared by local artisans, creating collages invites you to discover places or traces of a historical past, like the old hidden from the companies that made the original materials seals. In an interview Shu said:… “are not debris… is history, time and experience. Many people have touched these bricks “…. 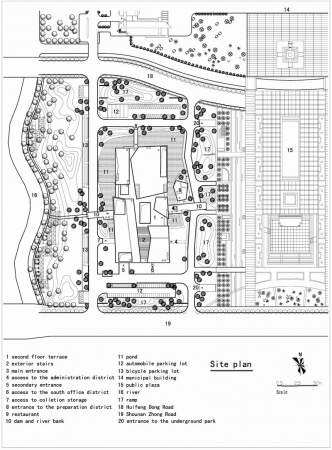 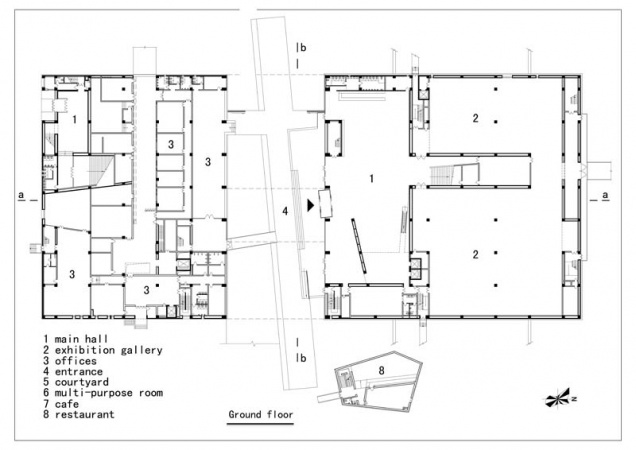 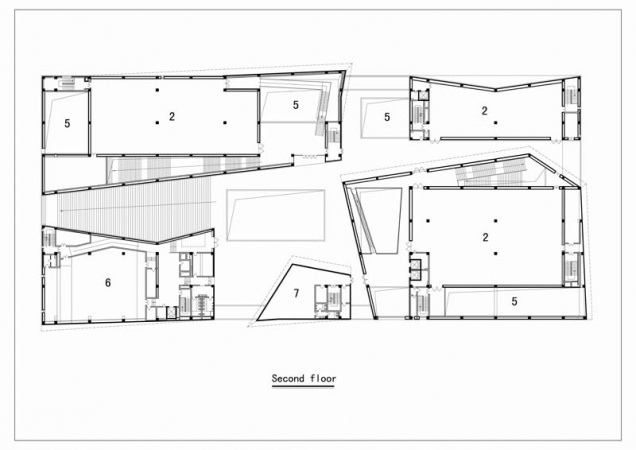 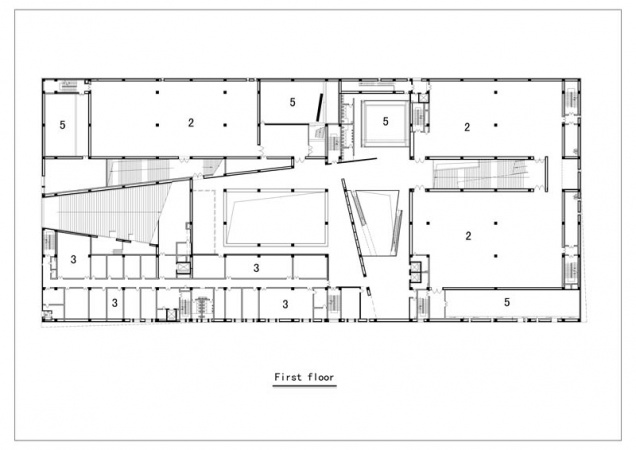 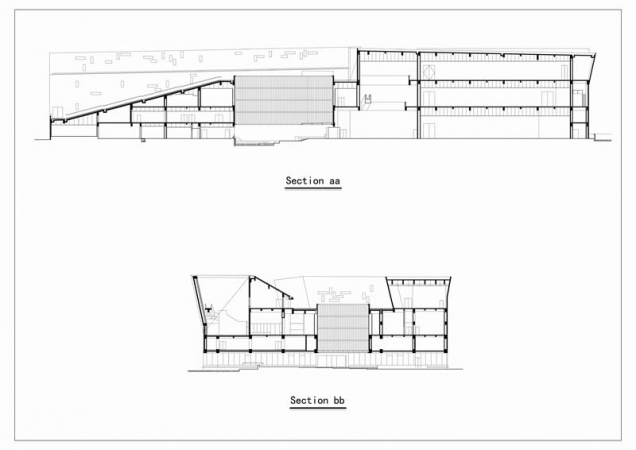 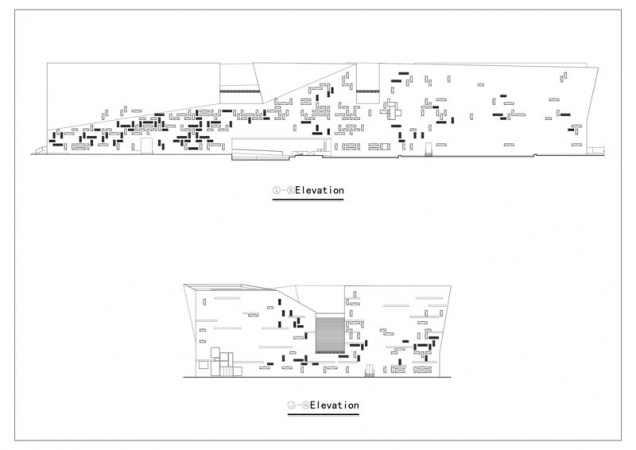 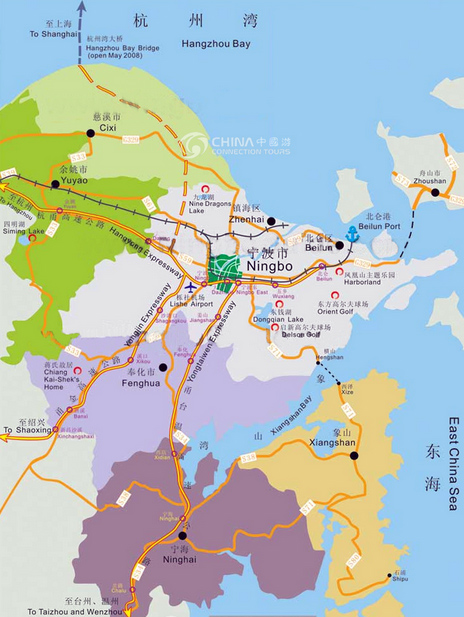 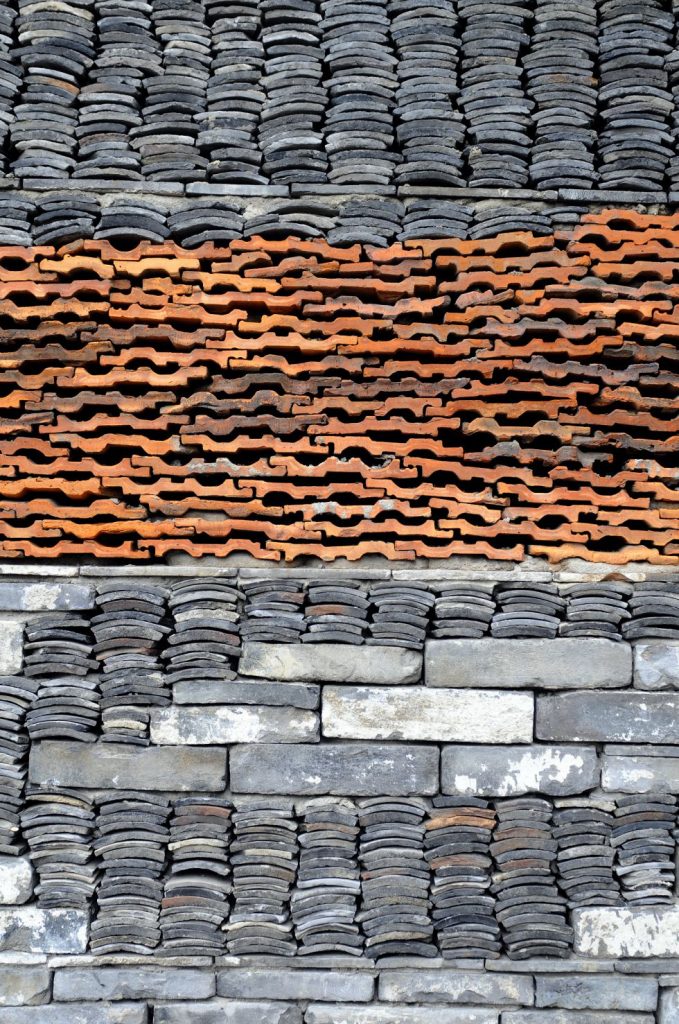 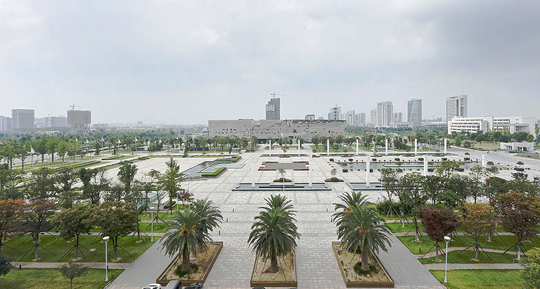 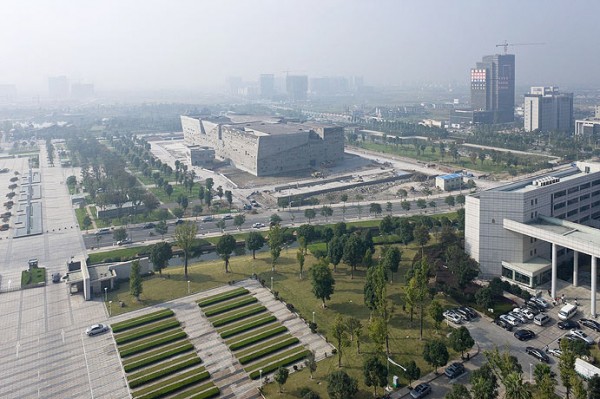 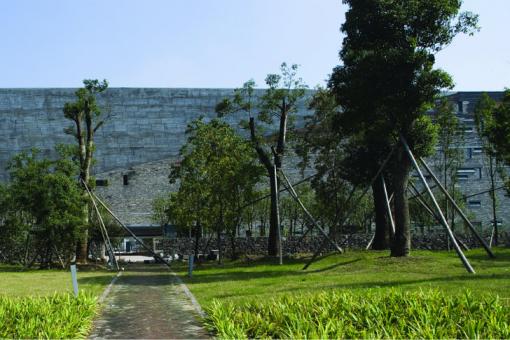 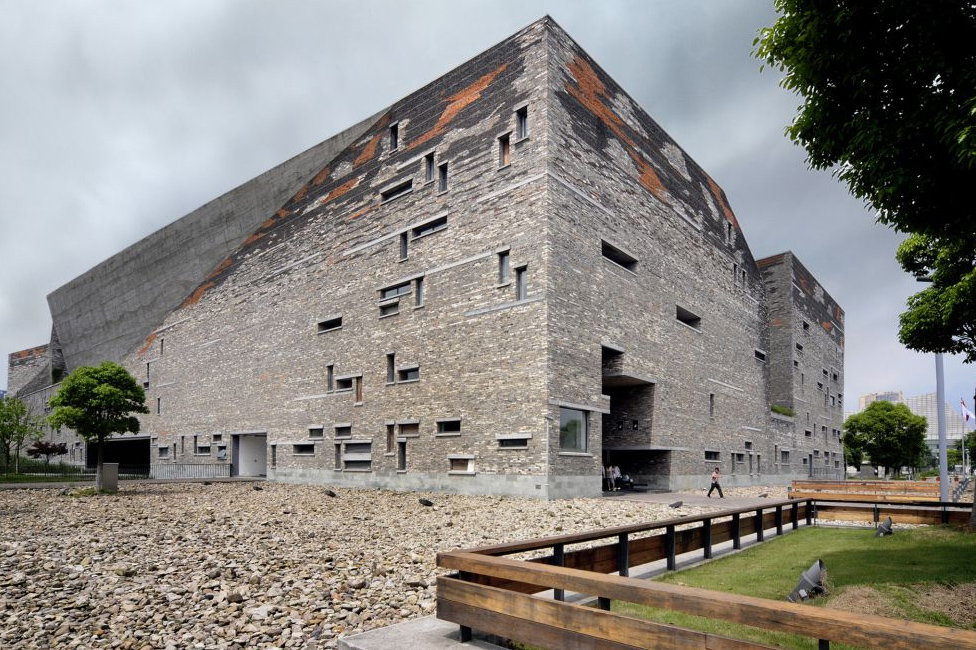 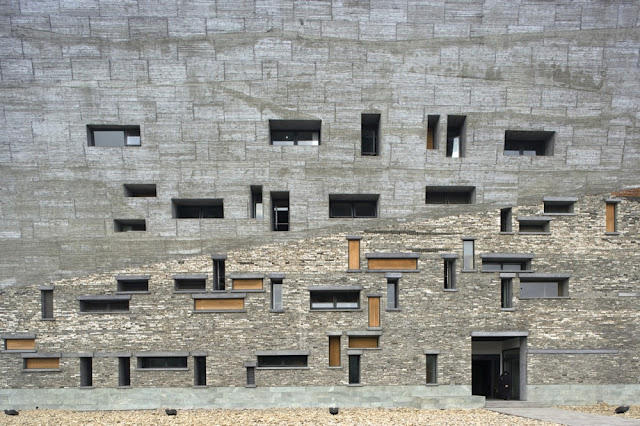 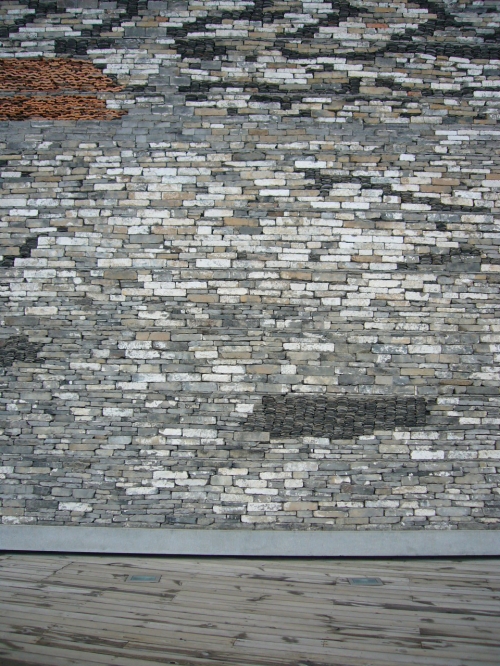 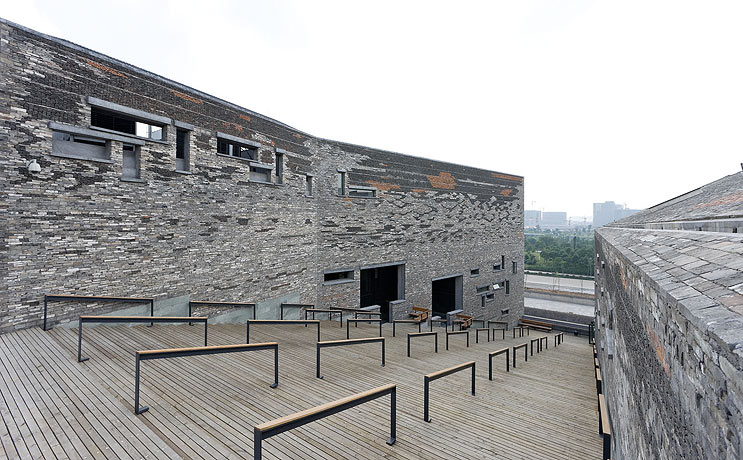 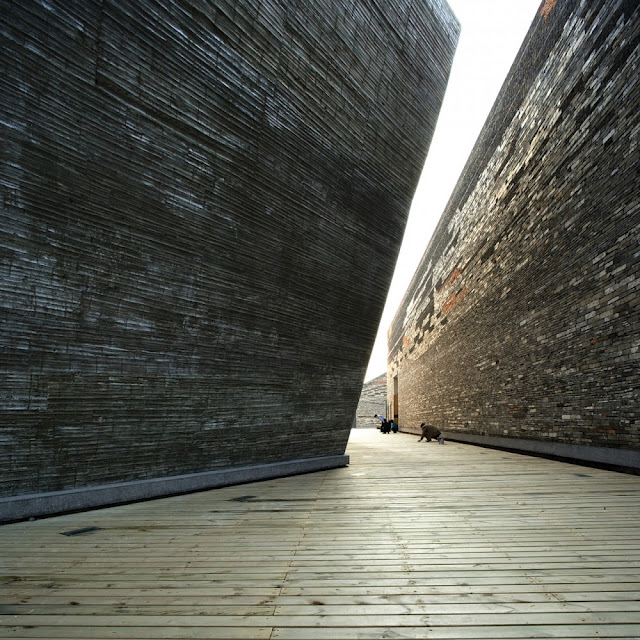 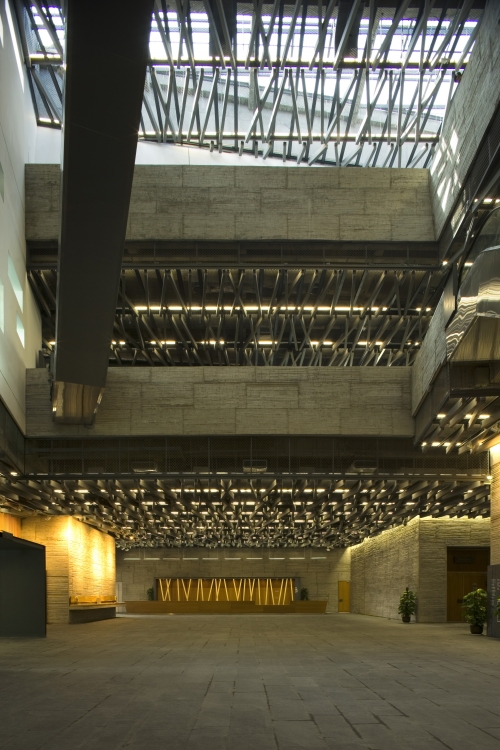 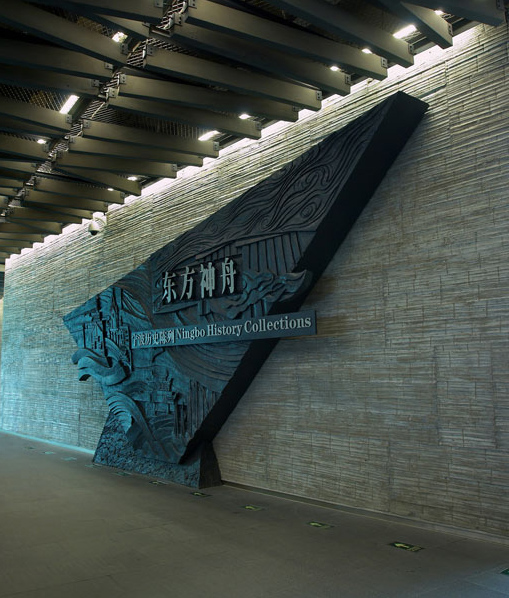 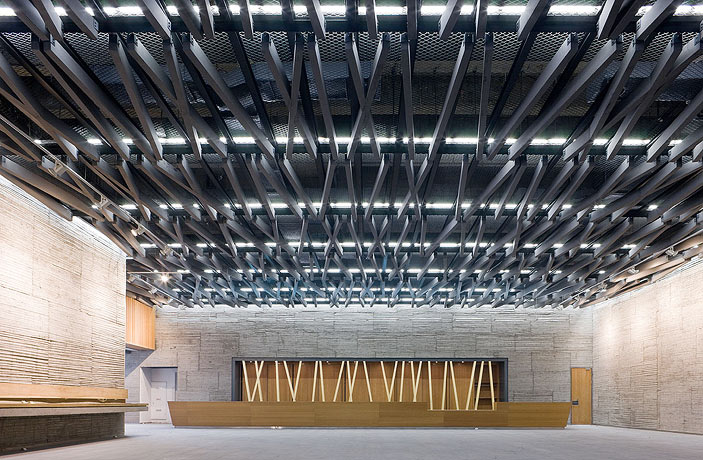 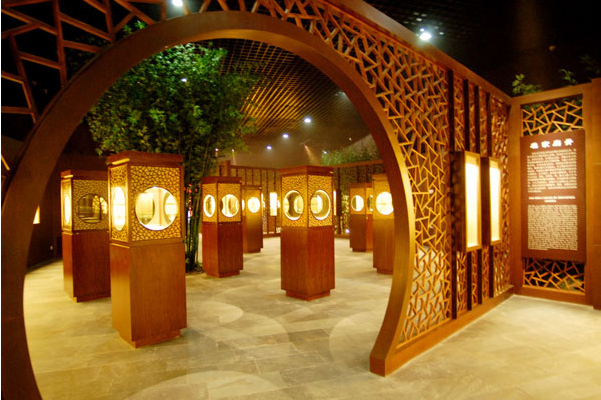