Netherlands Institute for Sound and Vision

The Dutch Institute of sound and vision, seeks to collect as many files on the important events throughout history, under one roof, thus becomes the safe housing the history of mankind.

The institute Hilversum is a huge television screen that lights up when night falls.

Hilversum, a tree-lined suburban neighborhood located southeast of Amsterdam, is known for being the center of the Dutch television industry.

The low visibility of the images in the glass facade conveys the daily bombardment of the media, but here in the building seem frozen in time.

The architects have expressed a serious critique of a world saturated by images in advertising, and have reaffirmed their belief in the heroic dimension of architecture. 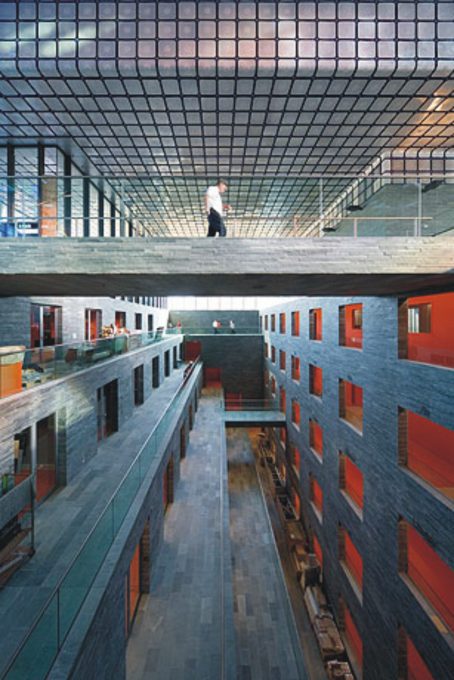 Accommodate as many files on important developments along the story was the role of the building.
To maximize space and meet the requirements for architects decided to split the space into two large blocks, one for storage and maintenance (private) and other entertainment and broadcast (open to the public). One underground and another on this.

Upon entering the visitor feel like you never rent a place.
From any point you can see plants that are above and those below, at different heights to be crossed by bridges.

2,000,000 photographs, 20,000 objects and 700,000 hours of images and sounds make up the file.
This container demand a lot of space and good storage conditions. Resolves underground shelter material because they are not required daylight.

At the entrance is seen as an empty abyss. One side of it is a smooth wall with square openings, which show the red. This is where the audio-visual material is perfectly protected, without access to the public. This kind of camera is about 6100 square meters. If the files are placed one behind the other measured about 41 miles long.

At the entrance, the two opposing walls, and the other a smooth aterrazada share material: green slate, a natural stone that embellishes the interior and gives the whole unit.

The five upper floors are arranged in an inverted stand on the lobby. They are covered with gray aluminum, which reflect the colors of the facade. 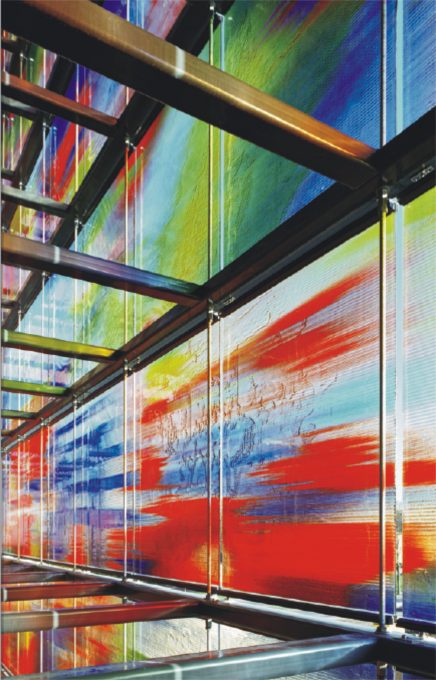 Of the front side of 54m square. It is a unique colored glass designed in collaboration with the artist Jaap Drupsteen of 65 years in which scenes from the history of television in the Netherlands are printed in Altorrelieve.

It was during three years on this front and demanded to develop a new production technique.
The first challenge was choosing to freeze images in the panels. We made a section of frames that Jaap Drupsteen then transferred to a panel of MDF (medium density fiber), thanks to a printer created especially for this purpose.

What was more difficult to provide relief through the technique of glass Slumping Glass. This has a high durability and resistance to ultraviolet rays. Because the approach is required that the windows were covered with rubber ceramics, and placed in an oven at 820 º C on a sand mold.
At this temperature ceramic paste able to burn the image on the glass, and it softens to take the shape of the tree on which he was supported.

Despite the relief is not too noticeable in general, brings together a unique aesthetic.