This whimsical near Mexico City, Design takes forms of aquatic life to architecture. The Nautilus House, designed by Mexican architect Javier Senosiain Organic Architecture, combines modern architecture with contemporary art and belongs to the category of “organic work” of the architect, inspired by the sea.

Completed in 2007, the social life within the housing flows without divisions, with furnishings that are part of the same house, making its inhabitants and guests are integrated and part of nature feel, like a snail indweller. The Nautilus House nothing is imposed, rather than shape is how it is that things help discover their way.

The project built for a couple and their two children was built in the municipality of Naucalpan de Juarez, State of Mexico. Fully integrated with the natural environment that surrounds the Nautilus House is surrounded by taller buildings, except for the west side, from where you can see beautiful views of the mountains.

Javier Senosiain explained that from the first sketches the implantation of the building in the background of the property is defined, leaving the front pedestrian and vehicular access, as well as the outdoor garden. In addition, one traditional facade was left but a call fifth facade, decks, in architectural language was added.

The rounded shapes and curves mimic the architecture and reinterpret the shells of the nautilus, cephalopod that give name to the residence. The shells of the nautilus, and inspire protection are synonymous with perfection as the spiral of its shell respond to a mathematical logarithm, having influenced inventors like Robert Fulton, creator of the submarine, or writers like Jules Verne.
This is a free expression of space, in which the main concept is that inside is an organic housing.

The whimsical shape of the house features a surprising cut in the wall where it has located the main entrance flanked by a sculptural wall colored glasses whose vision makes it attractive from the outside while inside multiple spot colors projected on the walls.

By accessing from outside, climb a staircase and go inside through the large stained glass, living the sequence of a journey, a spatial experience is generated where neither walls nor the floor or the ceiling are parallel.

Detail of a colorful environment without spatial limits is just one of the unusual features of the house. Inside a “carpet of grass” leads to its residents through a network of stone paths to the different areas of the house.

This room recreates the deep sea, with walls of sand, blue tiles and high round windows. From a niche in the wall a jet of water as a spring gushing from the rock

Both the rooms and in the living room or small bathroom ceiling voids allow light to enter, as in the troglodyte houses, very sheltered from inclement weather

This home has dispensed with the divisions that separate units other in the common parts, achieving a harmonious and unified open, similar to the house of a mollusk space. Only some curved walls that print spaces sinuous, harmonious and calm movements have been used to create private spaces on the ground floor, bedrooms, closets, bathrooms and kitchen.

Once through the door, stand the room, emerging from the inner garden and the dining table leaves the wall. Some cavities on top of the great room allow more natural light.

The staircase that spirals, continues down the hall, past the TV room, sheltered by the belly of the Nautilus, curve and seating around a central axis where the display is located. Following the spiral staircase, flows into the studio space, from where they can see the mountain landscape. At the top of the house, in the center, tambiéb water tank is tapered placed.

The house, when coupled with the uneven terrain, does not yield at any point on the straight line. All rooms respect the dynamics of the structure

The structure was created with steel frames coated wire mesh small diameter (chicken wire) on which a thin layer of concrete, four to five inches thick poured. This technique allows natural curves and rounded, avoiding the necessity of bearing walls or pillars. The interior is full of spirals, circles and organically rooms that mimic the concave cameras would expect to find inside a giant mollusk.

What gives structural rigidity, is the transverse form continuous spiral of double curvature, it structurally as the abode of a large snail.

“… The plant was shaped spiral adapting field, for which the logarithmic spiral line was drawn. The work required numerous changes in layout to get the volume and the way they wanted to get,” Nautilus ”

With its construction a harmonious space was obtained in three dimensions where continuous dynamic of the fourth dimension to move in spiral on the steps, with the sensation of floating on vegetation is perceived.

Ascend the spiral staircase continues down the hall, past the television room sheltered by the belly of crustacean. And climbing the spiral staircase you reach the studio where the mountainous landscape looks. On the back is the intimate area and service… “(Organic Architecture)

For ventilation were placed underground, two passageways allowing air to enter from outside. In the hot season, the air cools and refreshes the house to flow through the spiral staircase, pushing hot air upward and out the top. However when the outside temperature is cold air to penetrate the pipe heats the house.

In building the house was used Nautilus ferrocement composite material construction, thin and flexible. This material consists of a steel mesh distributed transversely small diameter and coated with a special blend of concrete is lighter than brick walls, is easy to maintain, has a long shelf life and is earthquake proof. For this apartment the layer is between four and five inches.

The opening of the shell is covered by a wall of multicolored crystals, which filter the sunlight and project chromaticism in the back room.

The paths that cross the main room, among dispense with potted plants as they are planted in large integrated beds on the floor are covered with natural stone. In some walls have been inlaid with colored stones, as details of the bathroom or kitchen hood.

In all rooms of the house have been created “ad hoc” incorporating Mexican handicrafts furniture with personality. 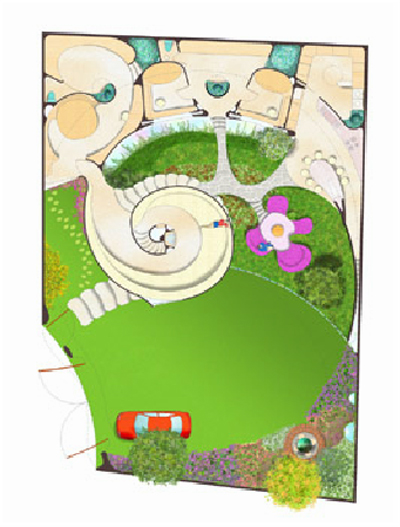 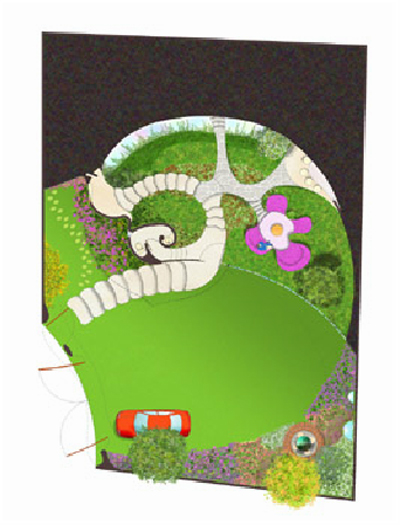 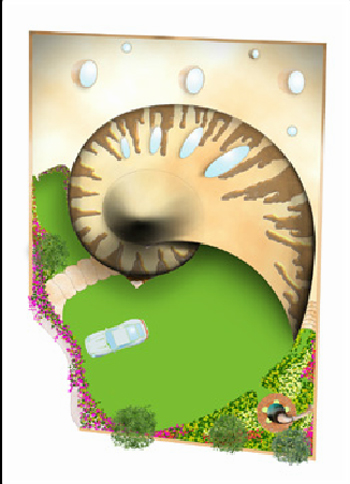 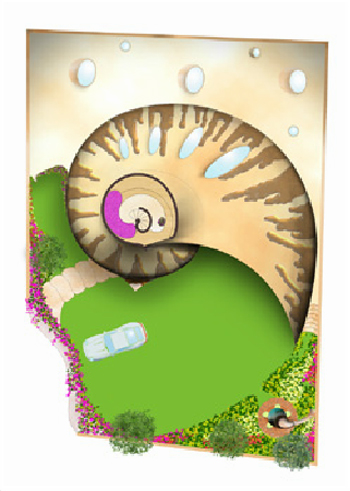 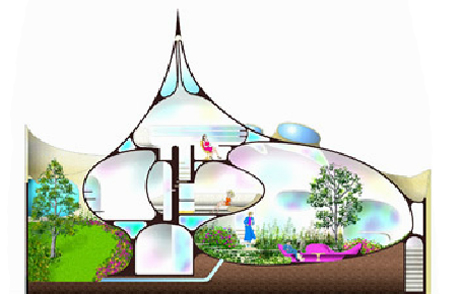 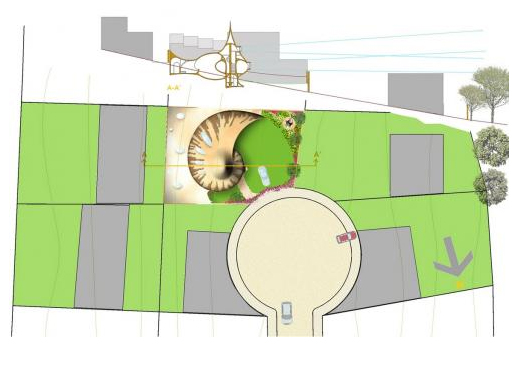 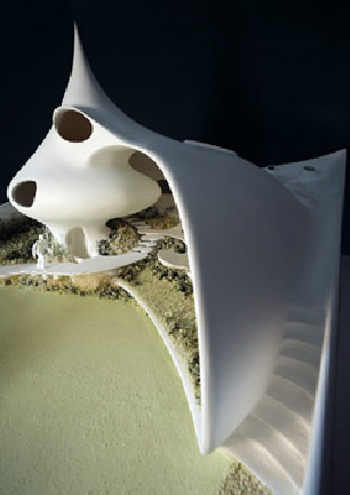 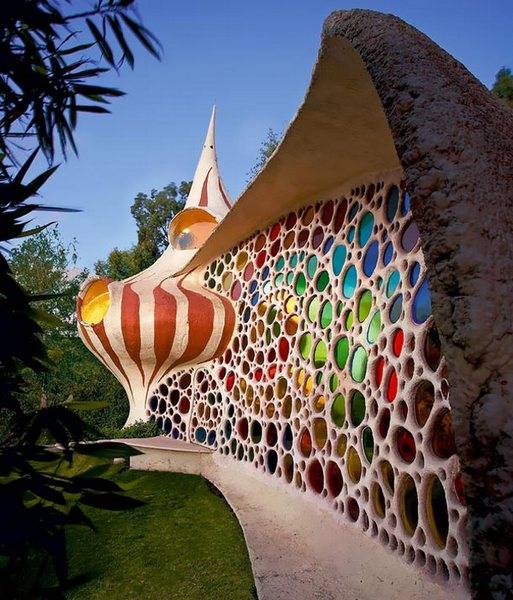 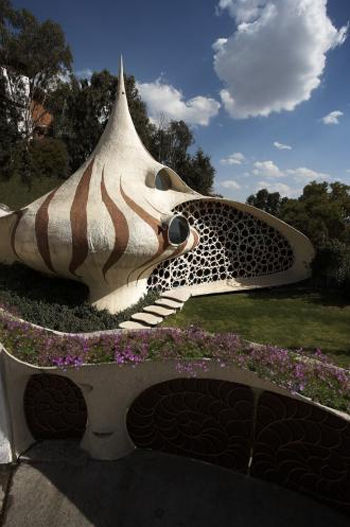 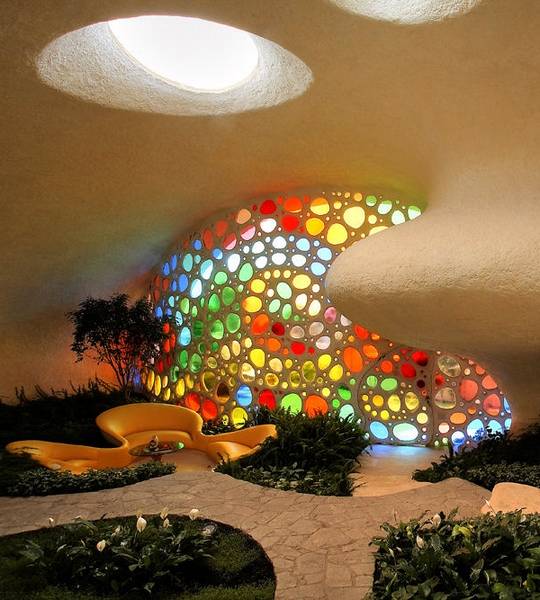 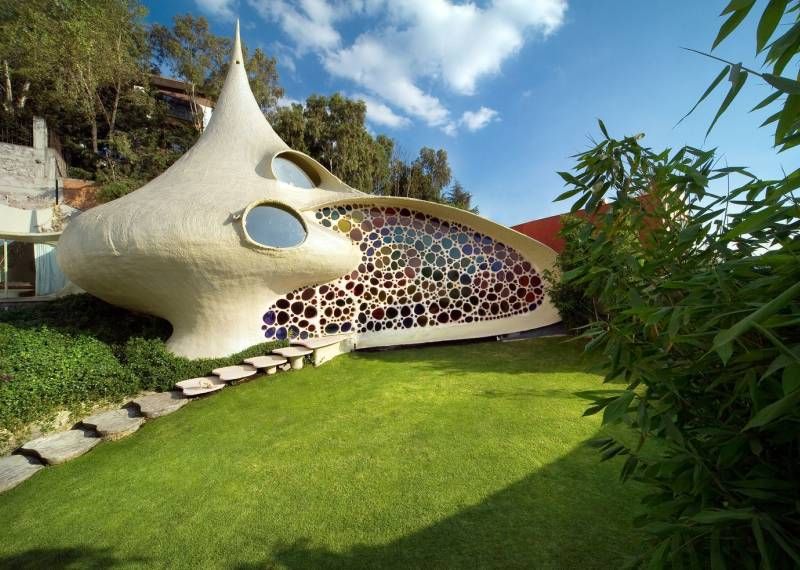 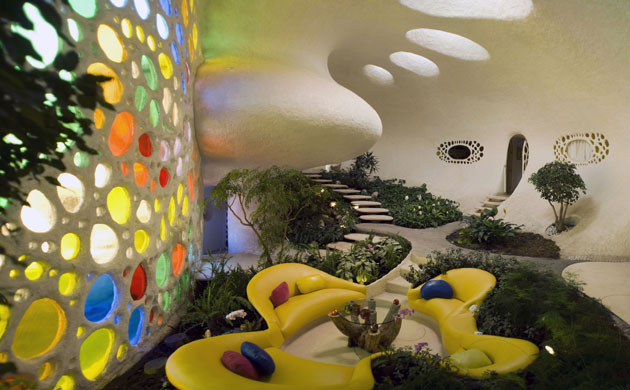 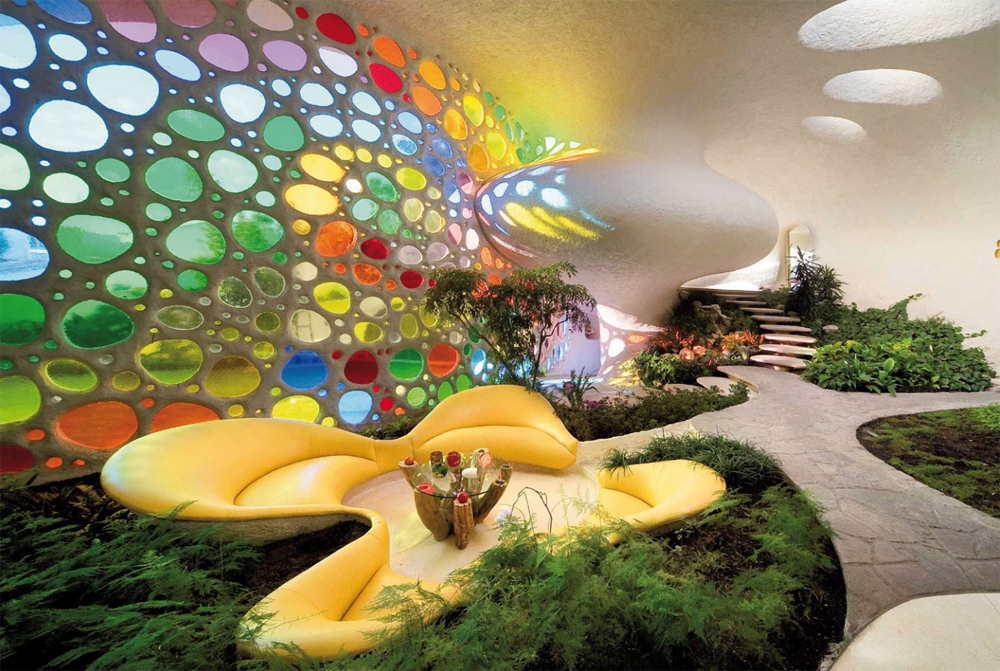 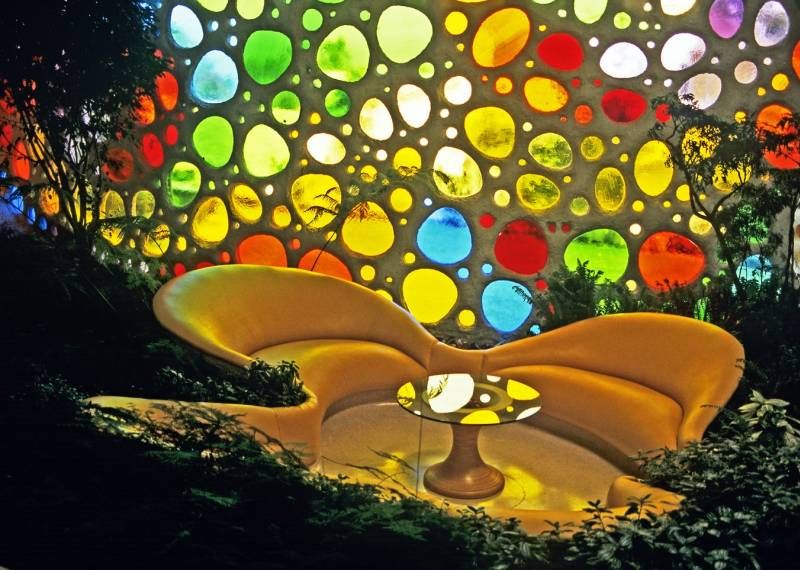 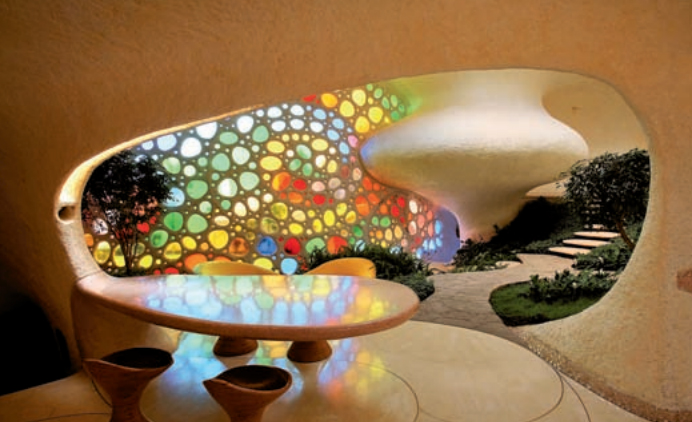 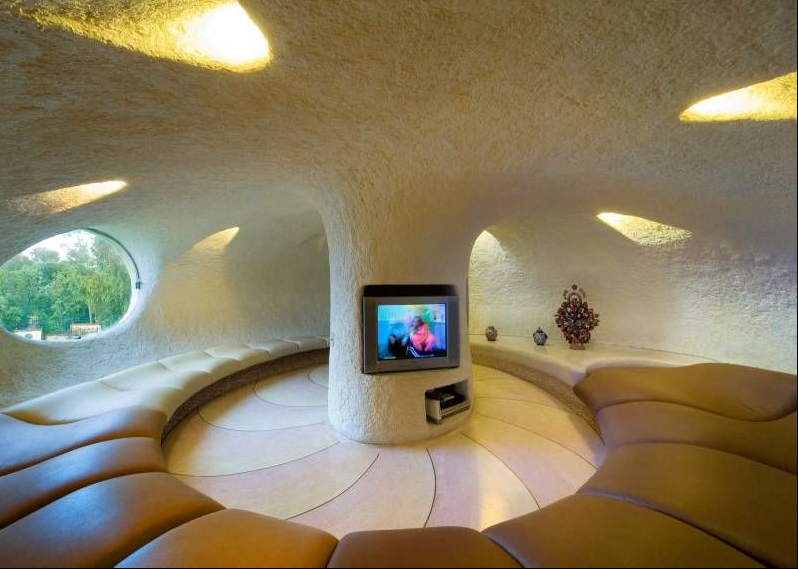 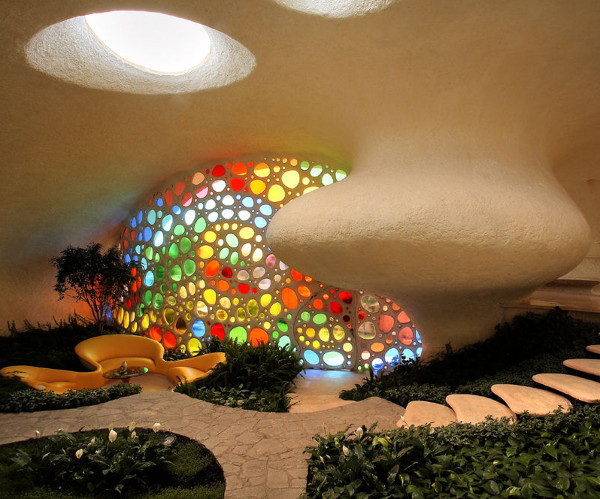 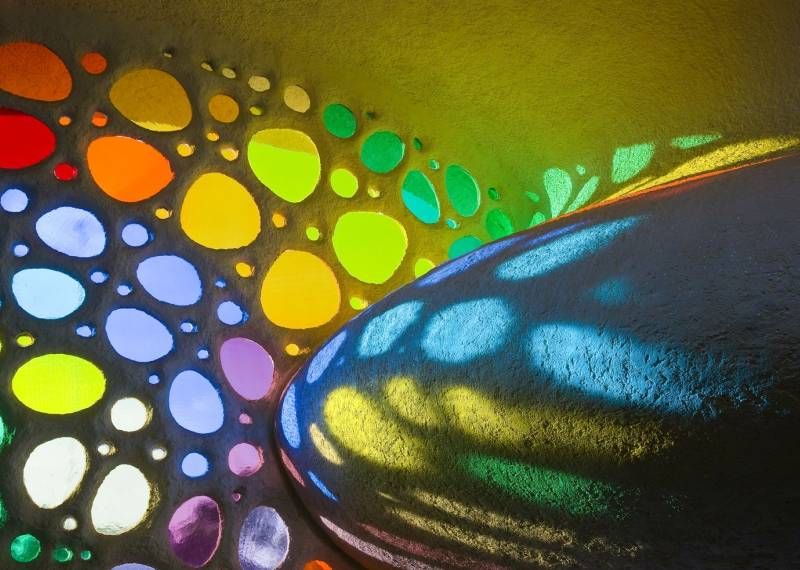 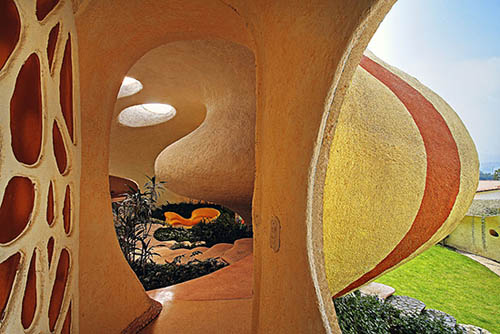 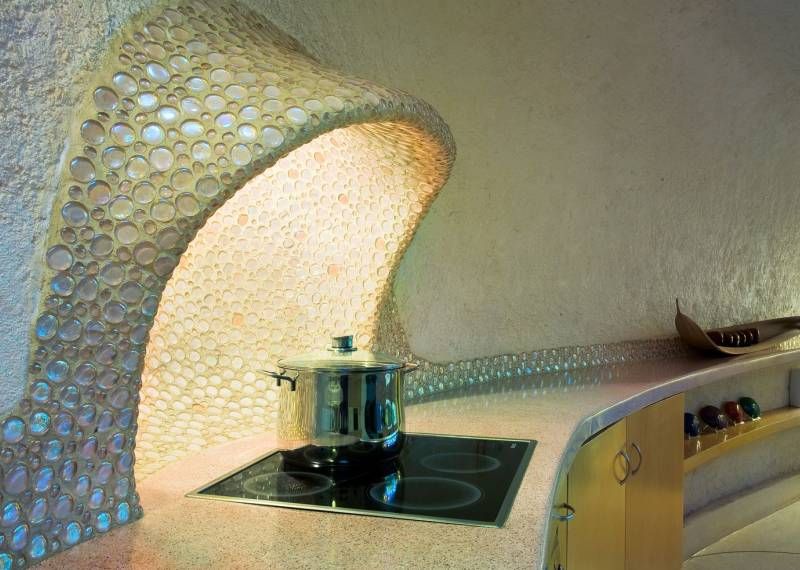 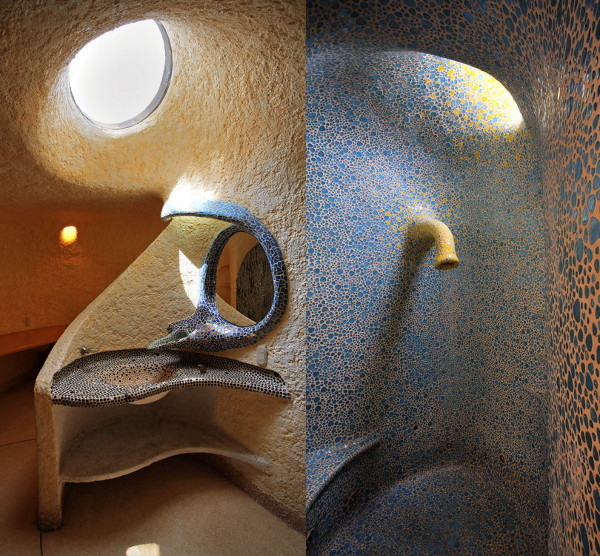 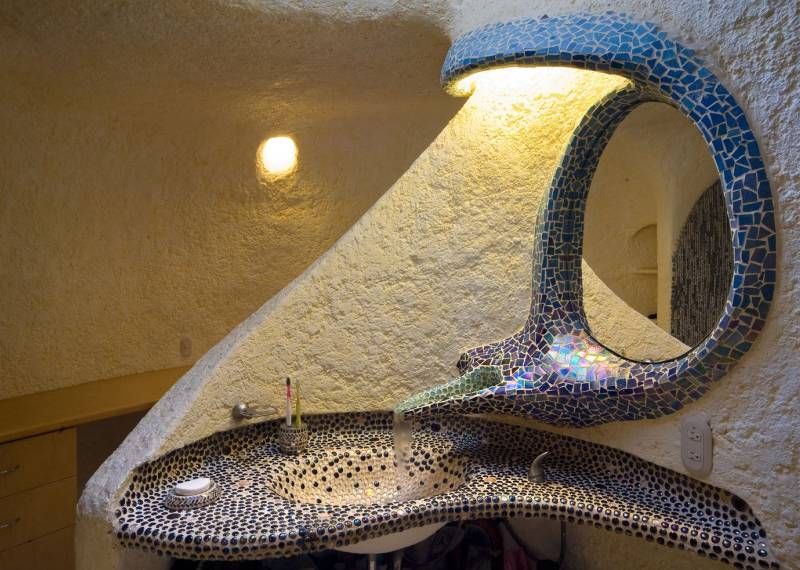 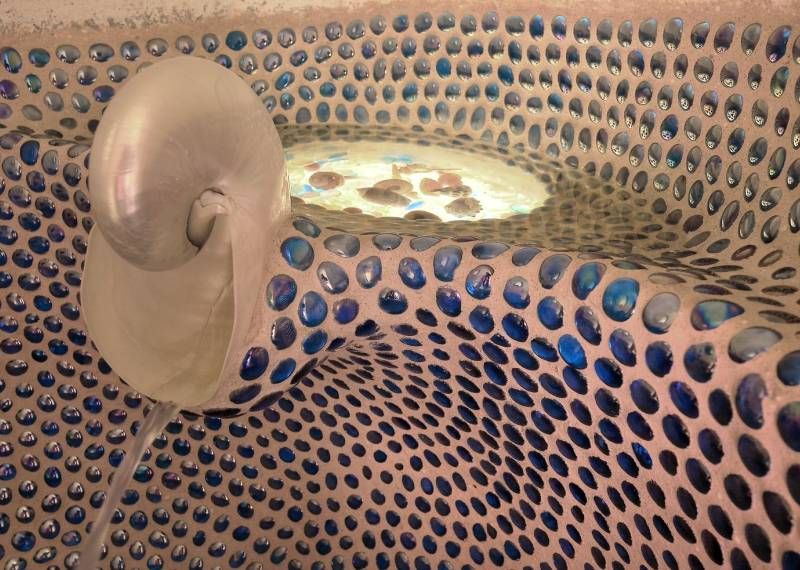 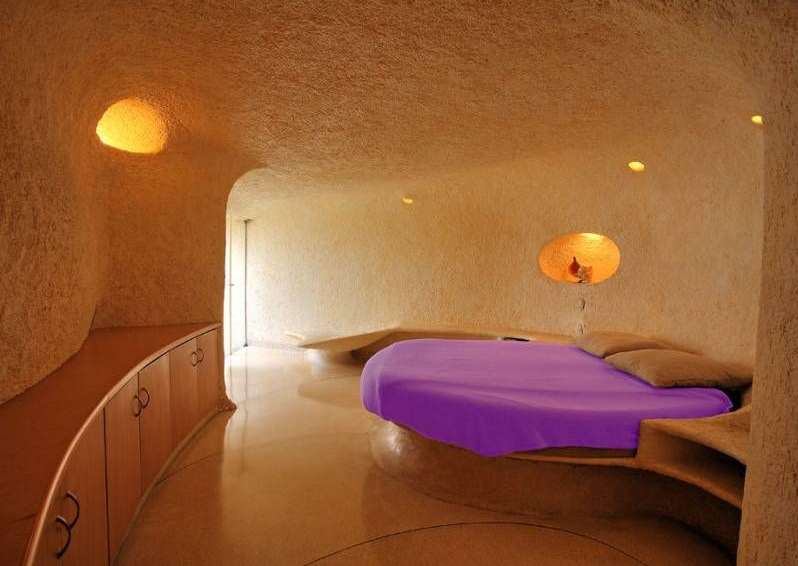 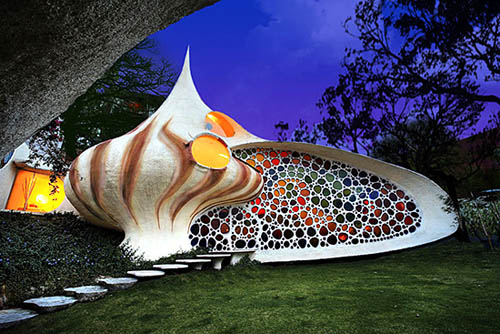 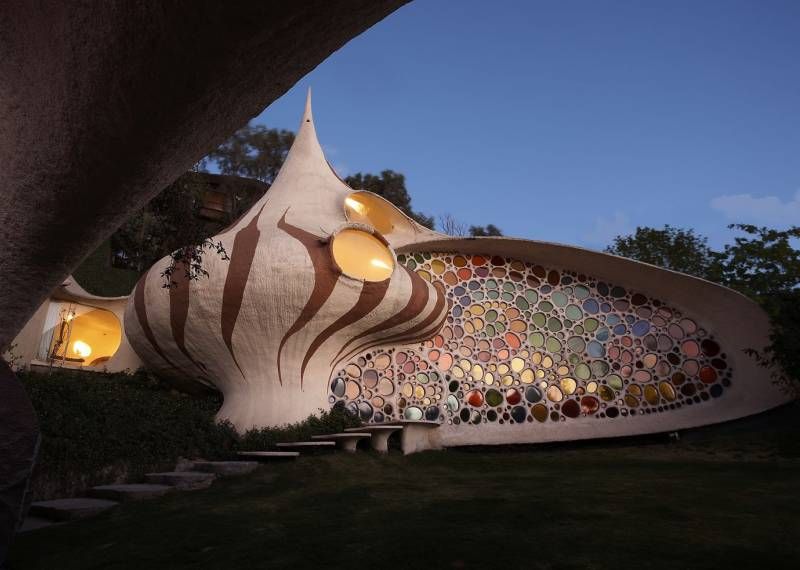 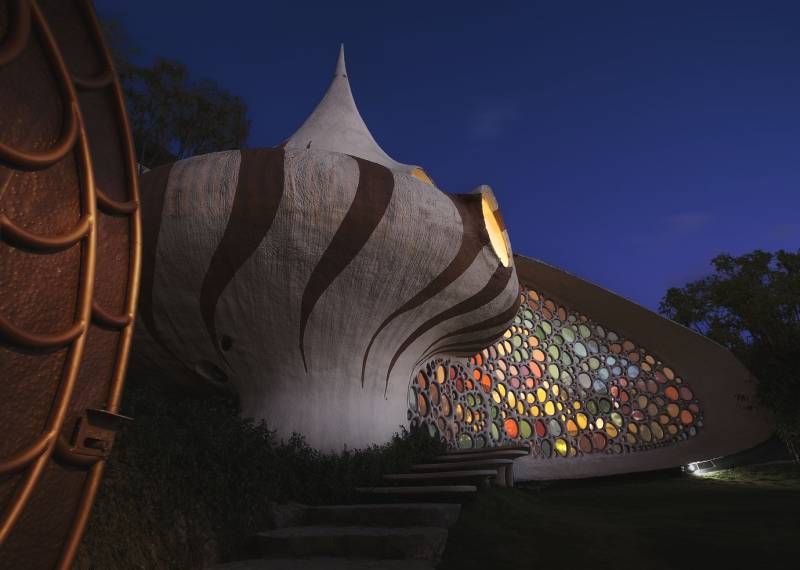