This building is born because the French government decides to confiscate Japanese citizen M. Matsukata much of impressionist art collection amassed during 1916 and 1923, taking it as a “prisoner” during the war. Within the collection were works by El Greco, Rodin sculptures, etc. In 1956, Japan requested the return to France of these works, to which the French government agreed on the condition that it is a French architect who developed the project of the building that would house such works. Another condition to be returned is that this place should be called “National Museum of Western Art.”

The museum to house the collection Matsukata was commissioned the Swiss-French Charles-Édouard Jeanneret-Gris (Le Corbusier) in 1955, with the project completed by three Japanese apprentices in his studio in Paris: Kunio Maekawa, Junzo Sakakura and Takamasa Yoshizaka. Later was built in 1958 and completed in 1959 by Shimizu Corporation.

The Museum is a historically significant building, completed in March 1959 as a symbol of the resumption of diplomatic relations between Japan and France after the Second World War. In 1998, the building was listed as “Kokyo Kenchiku 100 Sen” (100 selected public buildings), sponsored by the former Ministry of Construction, which determined that it was a unique public building well established in the local community. The main building has been designated a Cultural Building in 2007.

The site is located in Ueno Park, north of the Imperial Palace in Tokyo, closing the circle of buildings consisting of the National History Museum, the Museum of Fine Arts and the Museum of Science. The address is: 7-7 Ueno-Koen, Taito-Ku, 110 Tokyo, Japan.

Le Corbusier proposed a museum “square spiral”. The arrangement of the exhibition spaces spiral is an argument that applies in your projects, from the outside, the building appears as an opaque container off the ground on ‘piles’ and with only two openings that connect the inside with their environment and, connected by a sculptural staircase.

In 1929 Le Corbusier designed a model of unlimited growth Museum (Musée à croissance illimitée) for Mundaneum of Geneva. It was a square spiral, on one floor supported by stilts, which would eventually evolve and grow according to the needs of the project.

There are three versions of this type of museum in the world by architect: Kendra in Ahmedabbad (1957), the Museum and Art Gallery in Chandigarh Government (1965) and the National Museum of Western Art in Tokyo (1959).

Each element of the construction have been applied concepts of Le Corbusier Modulor. Based on the size and proportions of the human body, is a way to adjust the spirit architecture, order the infinity of possible dimensions, so as to adapt to the human form. The Museum of Western Art in Tokyo, the Modulor system can be seen in everything from the structural to architectural details and decorations.

The organization of the building is divided into two parts: the main building based on a square design and the new administrative wing is north. Both buildings are organized around their own backyards, in the case of the main building is a covered space, while the new wing encloses a garden.

Occupying land 1.587m2, built 4.399m2 of which correspond to 1.533m2 1.097m2 exhibition galleries and storage, distributed in three floors above ground level, a basement and a ground terrace. The main entrance is preceded by a square on which rests a statue of the “Thinker” by Rodin. At one end of the main facade, on the first floor, a large window leading to a balcony ledge, leaning on a pillar that serves triangular ceiling at the entrance. Similar detail is also seen in one of the sides.

The museum is square, “square spiral”, with the main body of the galleries on stilts at first floor level, accompanied by a pavilion for temporary exhibitions and a building for plays. Le Corbusier imagined a set in which the museum also contains a “miracle box” with a mysterious and amazing content as opposed to the main volume of the building compact concrete, never came to fruition. The design is influenced by the Kendra in Ahmedabbad that Le Corbusier was designed at the same time.

The visitor entrance is on the ground floor between piles up around the building and giving access to the hall in the opposite side offers a ramp up, another recurring architectural elements in the work of the architect, to the galleries exposure surrounding the main space: the Board of XIX century. At this level there is access to the conference room, out of the museum’s galleries, the main desk, locker, library, health room, access to the gallery B, toilets, library, museum warehouse, workshops and reserve materials.

The double-height main hall is illuminated from above with a glazed pyramid skylight facing north, intercepted concrete beams cross and a single column. A spatially highlights this central exhibition hall with its ramp and triangular skylight and double height gallery, also with overhead lighting, which exhibits the collection of the nineteenth century. This highlights its unique exhibition space and towering pillar that rises up to the skylight supported by cross beams.

One of the favorite resources of Le Corbusier, the ramp leading to the second level and a large room, the Matsukata gallery with temporary exhibitions, permanent stands, conference and film. The exhibition spaces of this plant are developed concentrically around the great hall.

In three different locations within the showroom of this level, there are three independent mezzanines that are accessed by narrow stairs, giving access to small exhibitions. These spaces were closed to the public.

In this room there are two balconies that reflect the nineteenth century hall below. From the first balcony you can look down and see the showroom after another balcony, discovering the many places offering this building. The showroom has two roof heights, which highlight the transition between the open and more tablets. The lower ceiling is fixed to 2.26 m according to Modulor measurements, the other twice the height.

This plant has shed roofs and skylights, a roof ladder, various pots. For Le Corbusier the ceilings were an important part of the building. Designed to cover museum with different shapes and heights, with side windows that allow the passage of natural light to the interior, decorated with flowerpots and plants, but later was another space not open to the public.

In 1979 a new wing was added to the museum, developed by Maekawa, respecting the original building, 4.902m2 distributed on two floors above ground level and two underground. With this expansion 1.525m2 earned more for exposure and 576 for storage. This new wing was designed to complement visually and structurally integrated with the main building designed by Le Corbusier. The outer walls open joint used in the binding of PC boards, creating a double structure which provides thermal insulation. Like the main building has been surrounded by large trees that create a green courtyard.

Between 1994-1997 a new wing was added for special exhibitions, with two floors above ground level and two underground, while the entire building was reinforced with new seismic techniques, while respecting the original building again. The building was built with the purpose of improving the activities of the museum for the XXI century, focusing on special exhibitions, restoration, conservation, arts education and information and documentation.

The new building consists of three main sections and 1,525 m2.

Added a facility used exclusively galleries for special exhibitions, in the second basement, overlooking a courtyard in front, storage area and auditorium are located nearby. The public access to the galleries from the lobby on the first floor of the Main Building by stairs or elevators, and returns to the main lobby via escalator.

The offices of the Division of Research, responsible for the conservation and restoration, educational programs and information services, are located on the west side of the main building, where they connect with the new wing.

As the Research Division, the various offices of the Division of Administration are on the west side of the building, facing the street.

The structure is made from columns of circular cross section reinforced concrete arranged in a grid of 6.35×6.35 m, supporting the entire building, a concrete box also stops free plant based on a concrete slab system reticular, seeking what Le Corbusier came practicing for his work. The exterior stairs projecting forward from the plane of the facade.

The columns are 60 cm thick on the first floor and 55 cm in the second. Originally they were 53 and 43cm respectively, according to the dimensions of the Modulor, but had to be thickened so they could offer more resistance in case of earthquake. The columns of the first floor is made thicker to withstand greater load could also. Were used for formwork pine wood characteristic patterns printed at the surface of the concrete piles made in situ.

Access is through the gate made piles, because all the container is elevated, creating an area that is used to display statues. On the walls of the gallery wall is detached from the main structure, with absolute freedom to the space available. As for the conference, which is a single element, is composed of a large volume having a concrete grandstand, like elements are on the outside of concrete were made as in the case of museum exit (stairs).

The concrete was used in the structure, but also in the coating of exterior walls made of prefabricated based settle in U-shaped frames supported by the inner wall, and where the concrete is mixed with green stones, the woodwork are steel and some wood trim inside the building.

The drains rainwater were placed inside the building. Le Corbusier devised numerous designs and places to include these drains so visible within the spaces.

Le Corbusier designed the gallery of paintings to be naturally lit through four lighting channels, but these are no longer used, being replaced with artificial lighting. Nevertheless it can be seen at the top of one side of the roof, in the nineteenth century hall, a large triangular glazed window, which helps to illuminate the room with natural light.

The triforium gallery above the roof portion in the showroom on the second floor, was designed to allow in natural light from the roof to the exhibits, but now the gallery is lit artificially.

On the floor of the same room lights were installed to illuminate the work from below. While not in use, you can see the glass lids that cover.

Fine vertical concrete mullions are located in places such as the area of ​​housing in the restaurant or in the museum shop. The rhythmic variation is transforming the lighting conditions in these areas.

The main building of the National Museum of Western Art was renovated by professional experts who used information obtained from the aftermath of the Great Hanshin / Awaji in 1995.

To install seismic isolation devices in the existing building foundations, was due to make a “technical adjustment” that made it more sturdy structure to earthquakes. The restructuring began in 1996 and ended in 1998, always maintaining the integrity of the original design. 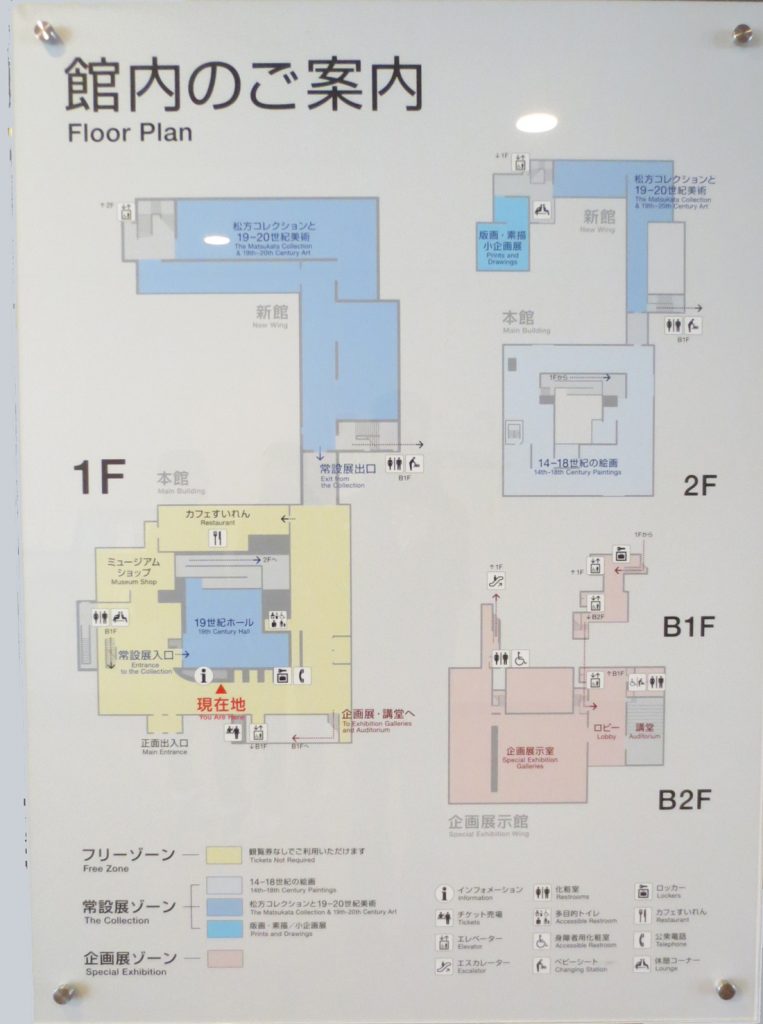 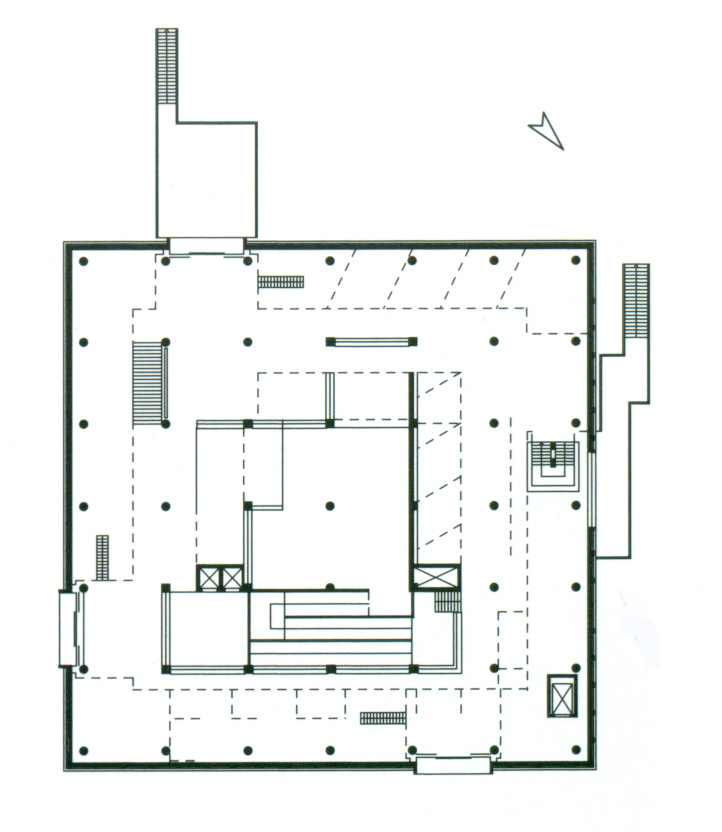 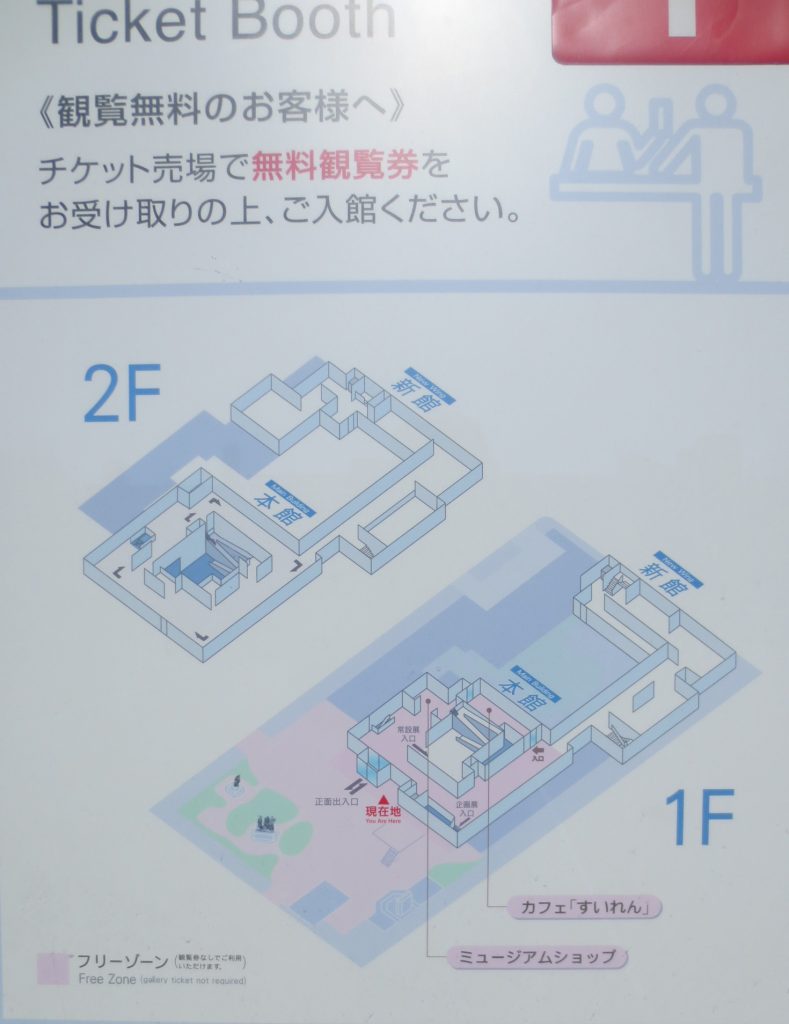 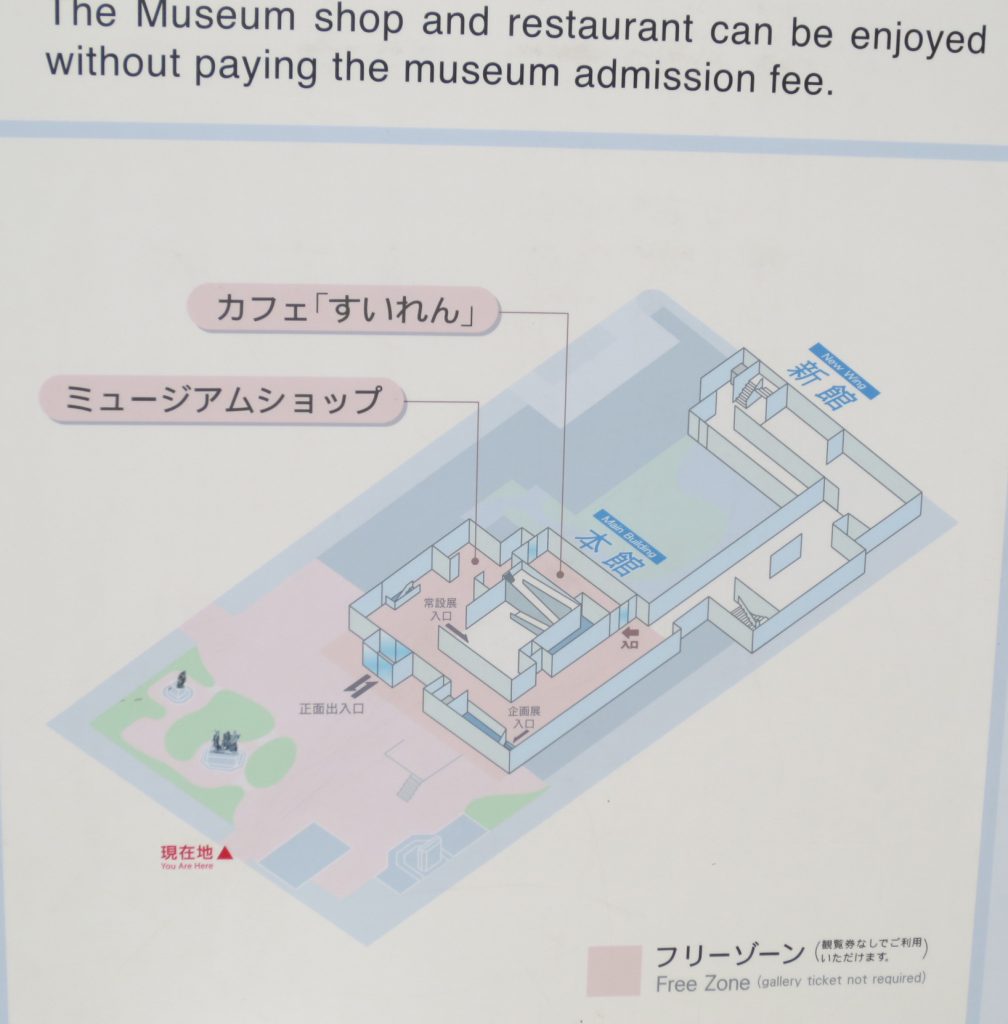 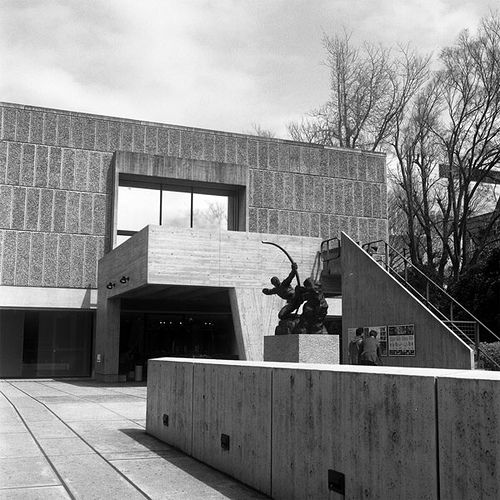 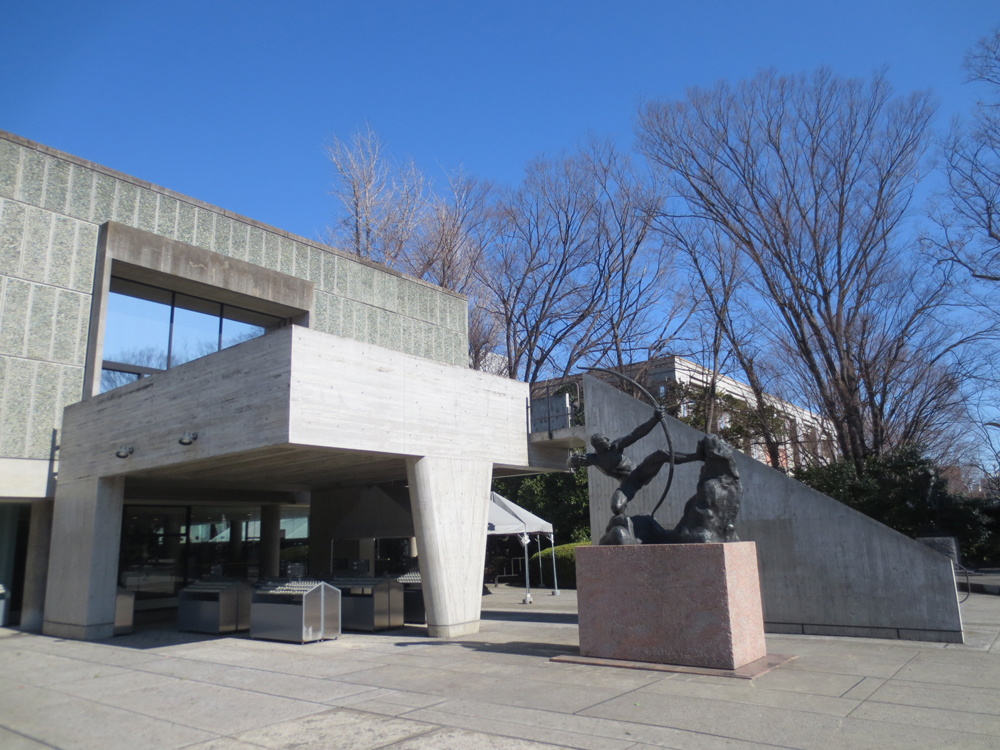 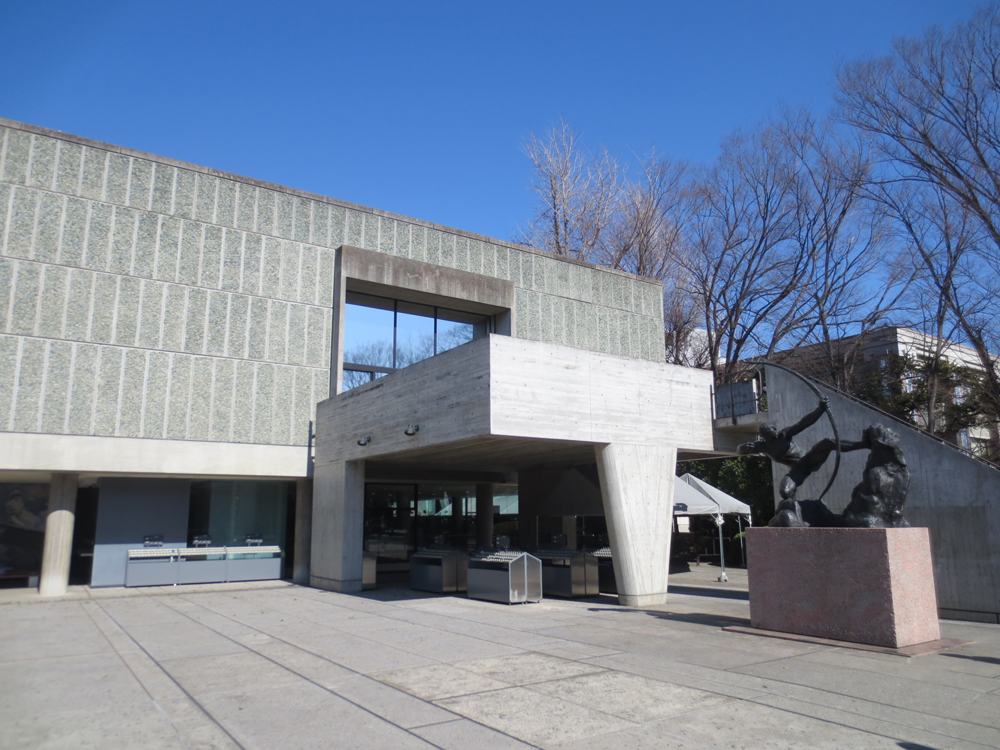 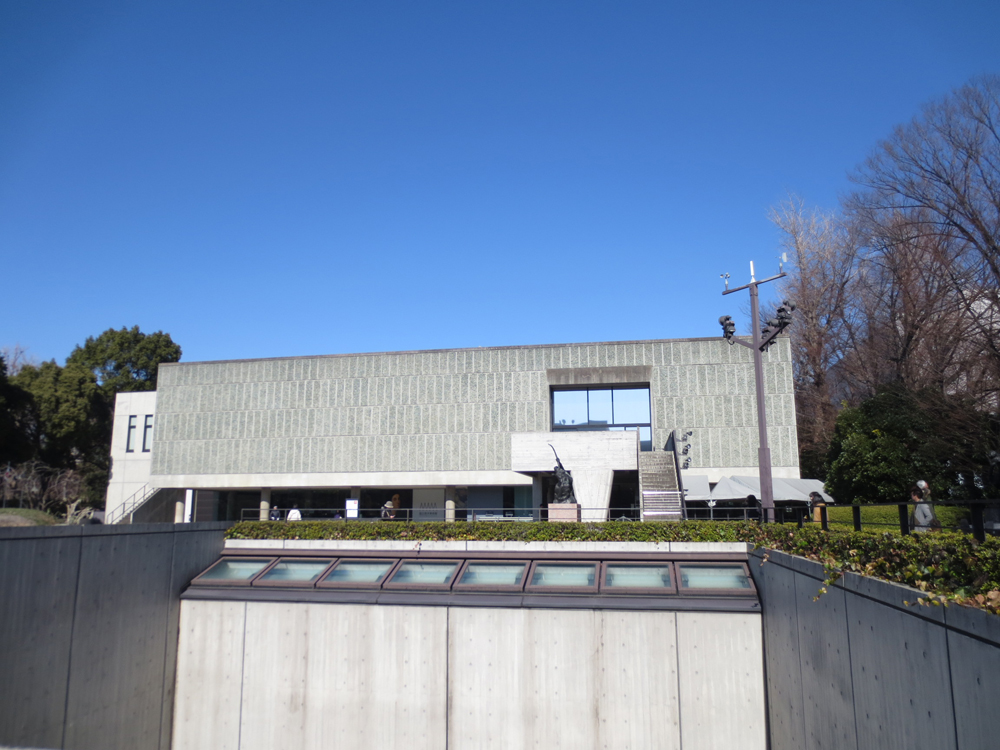 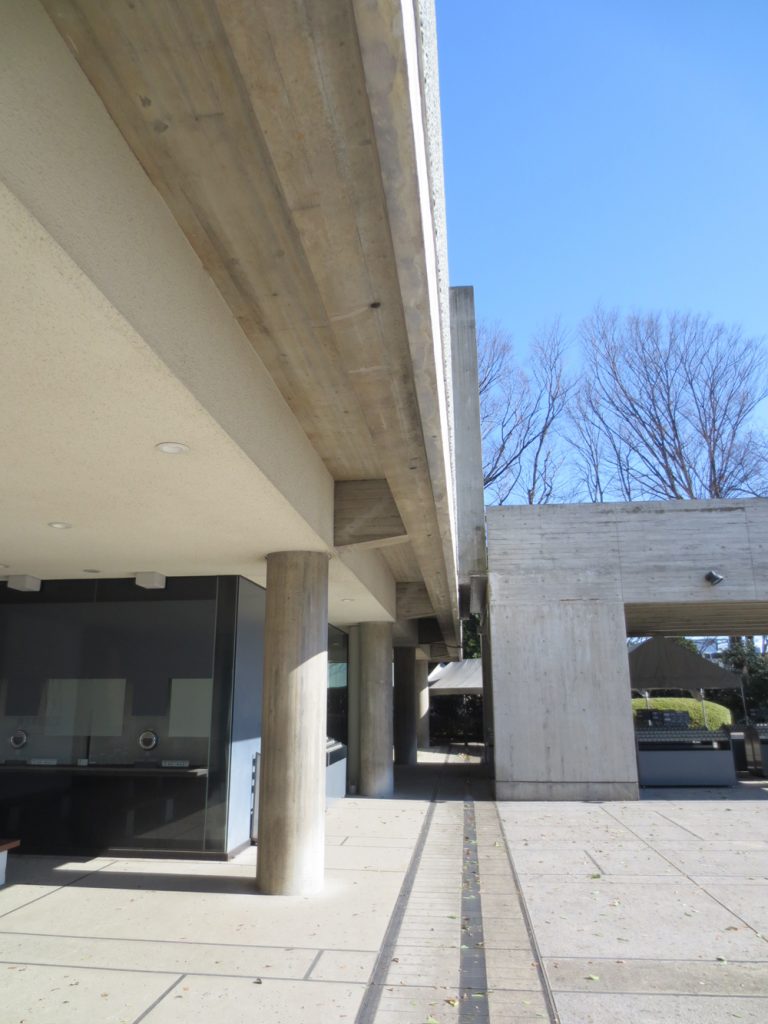 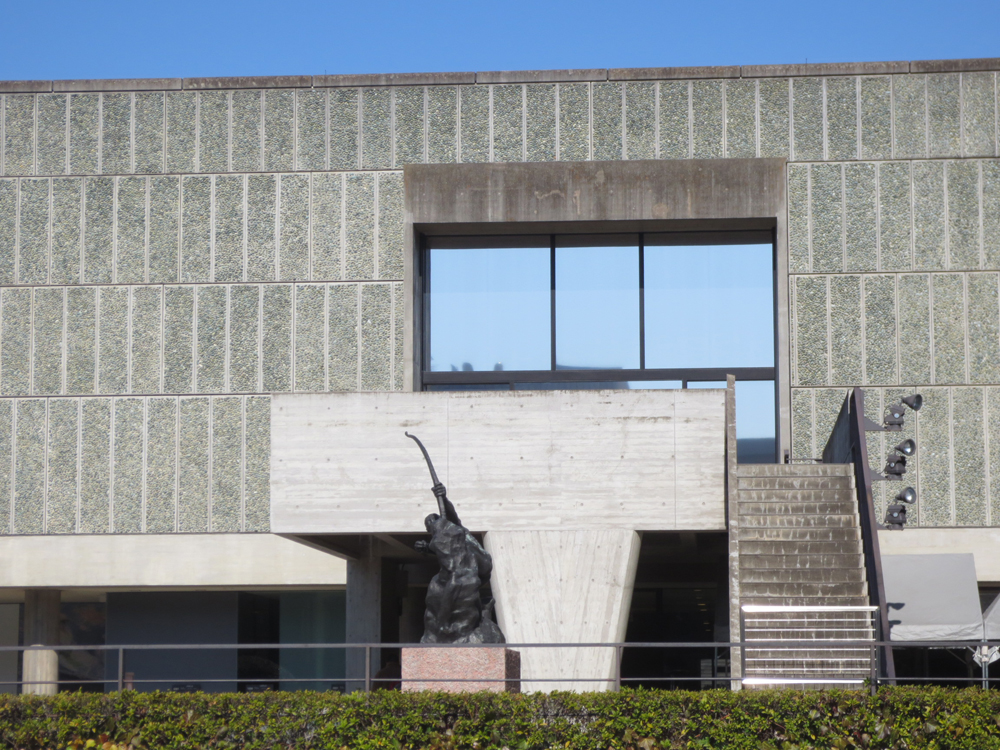 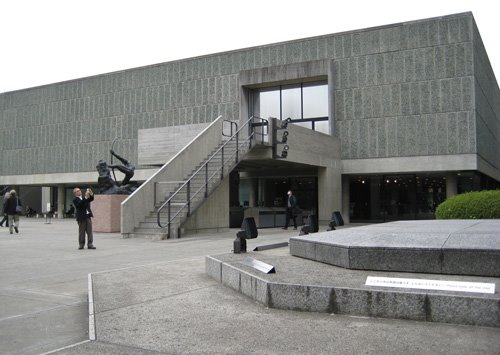 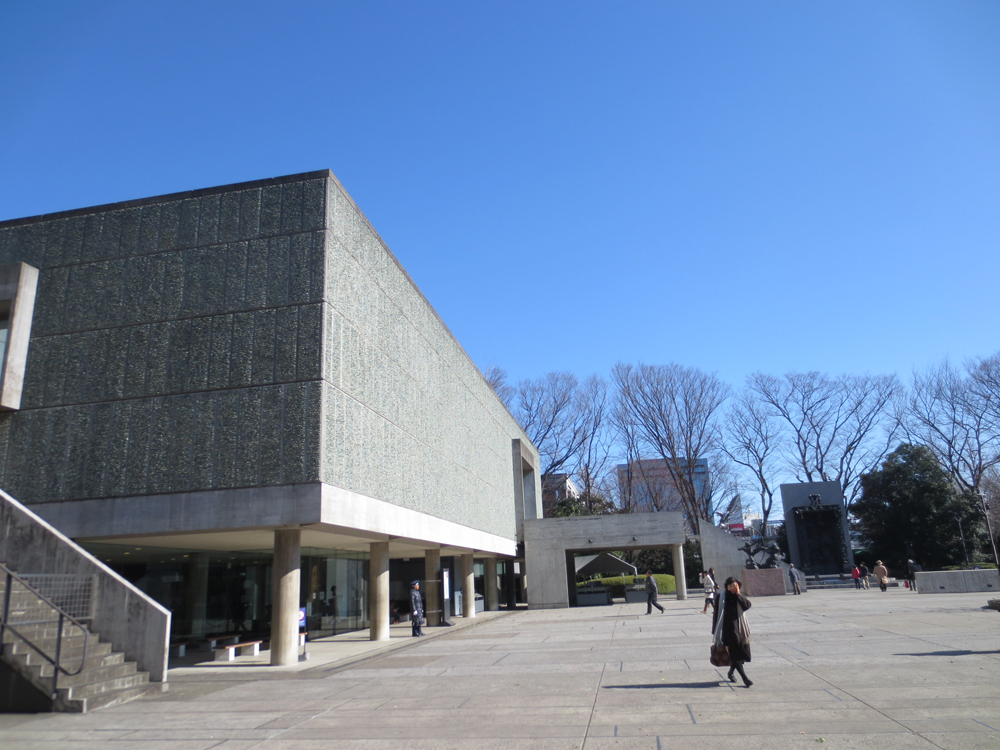 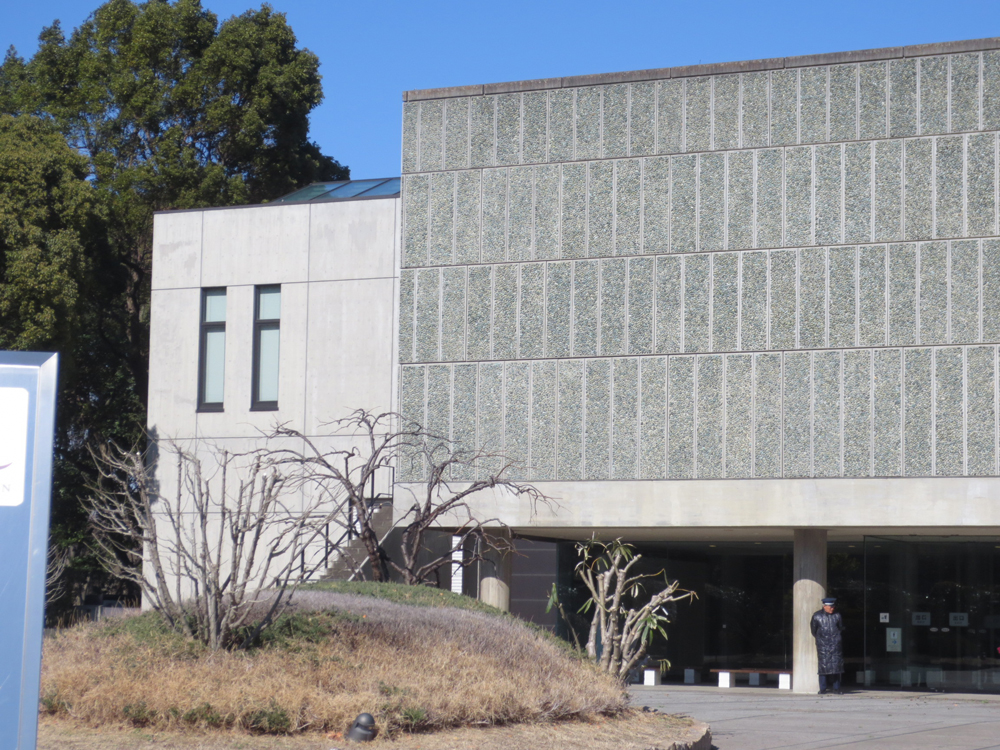 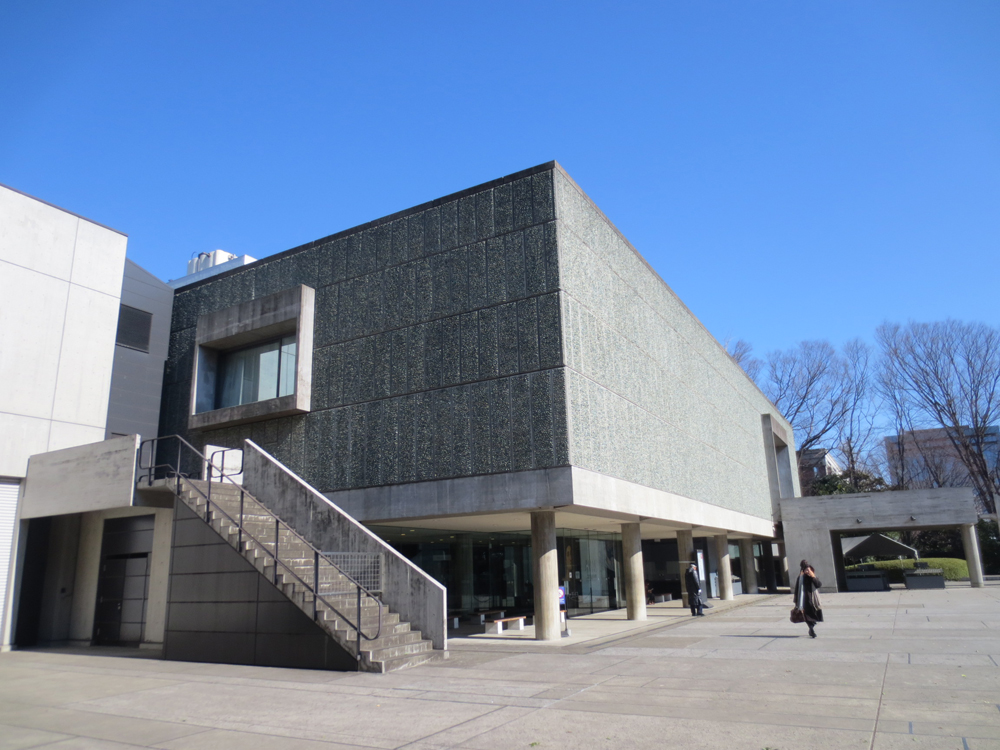 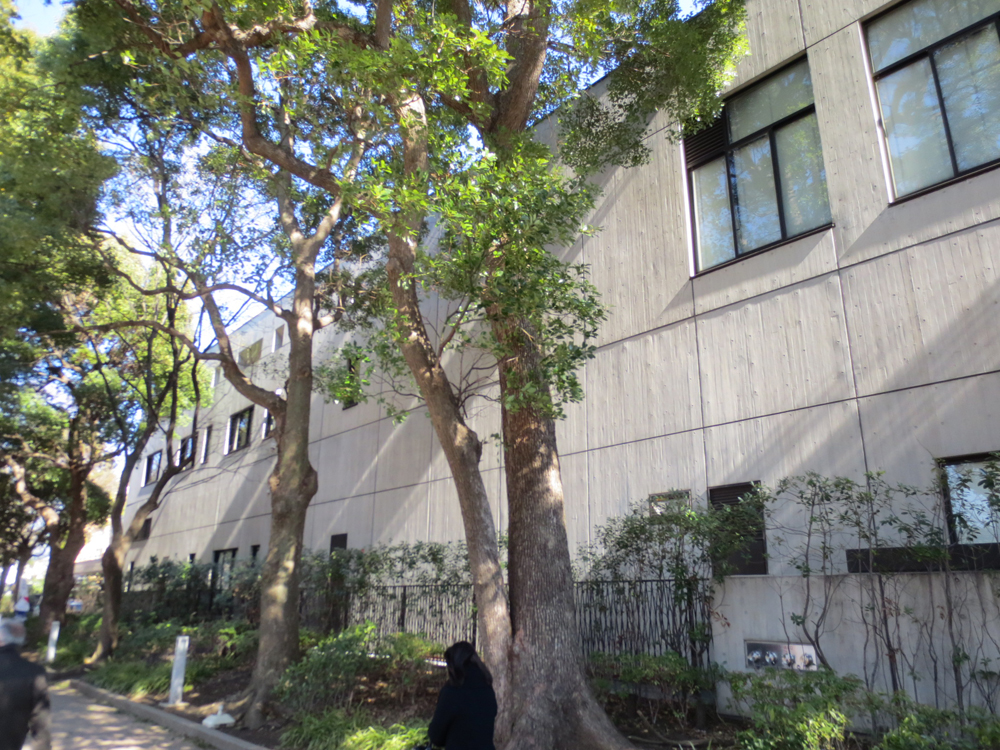 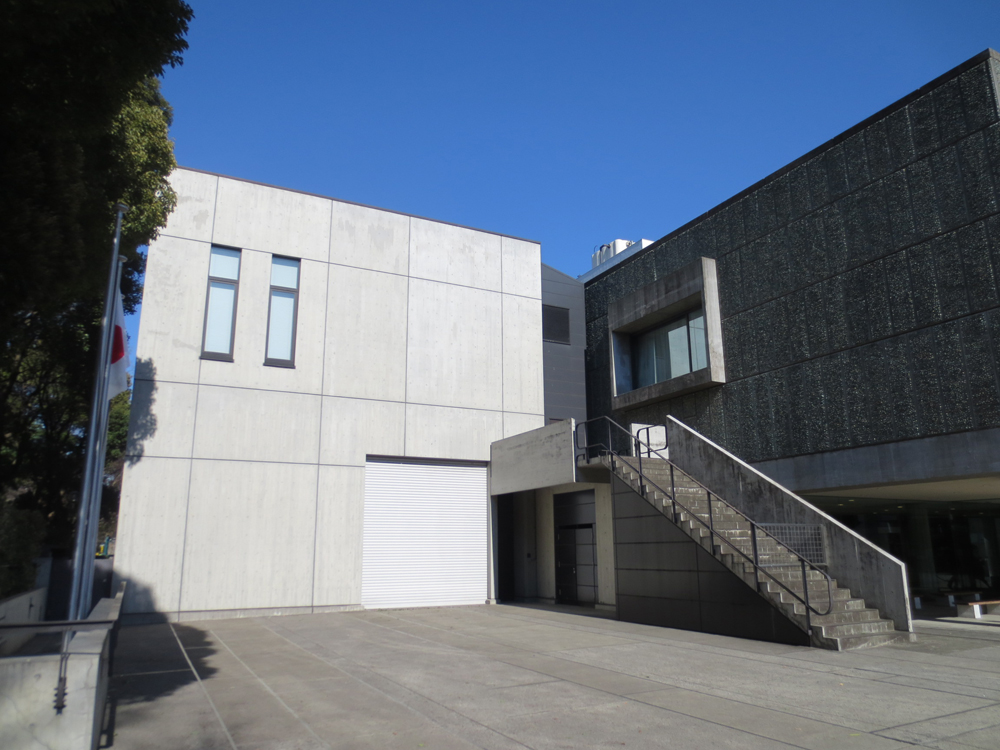 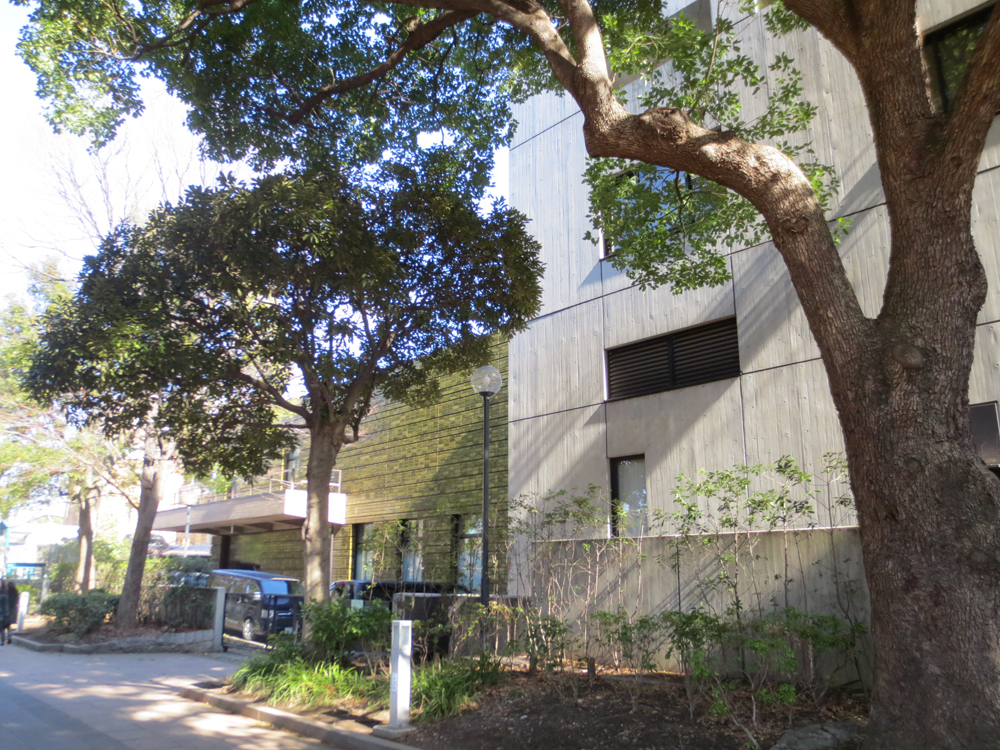 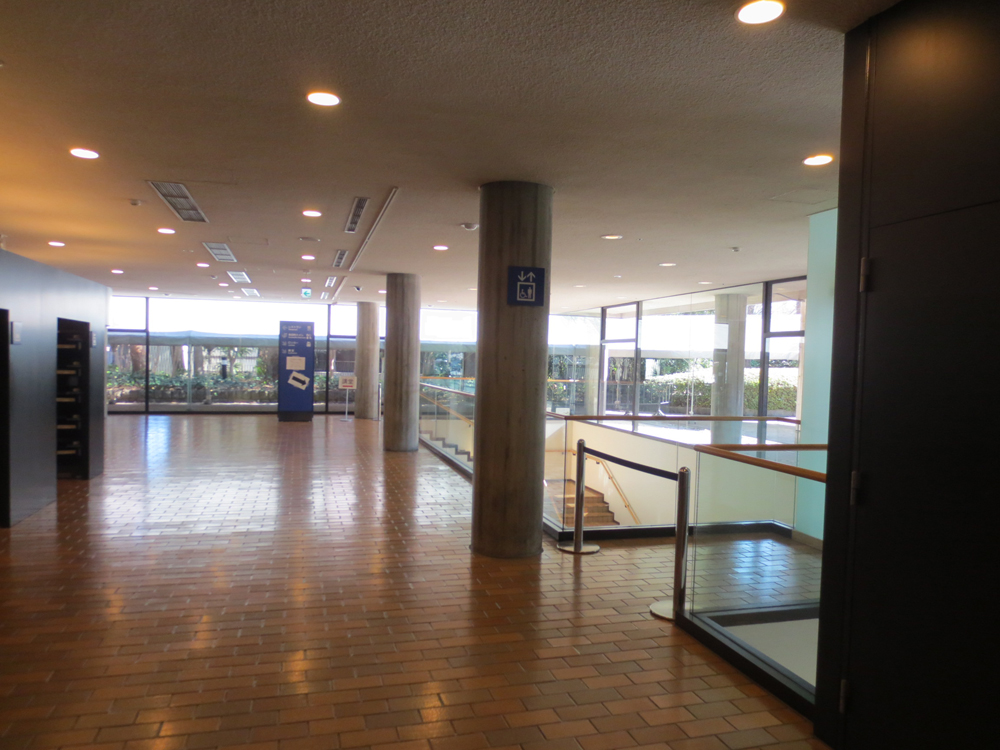 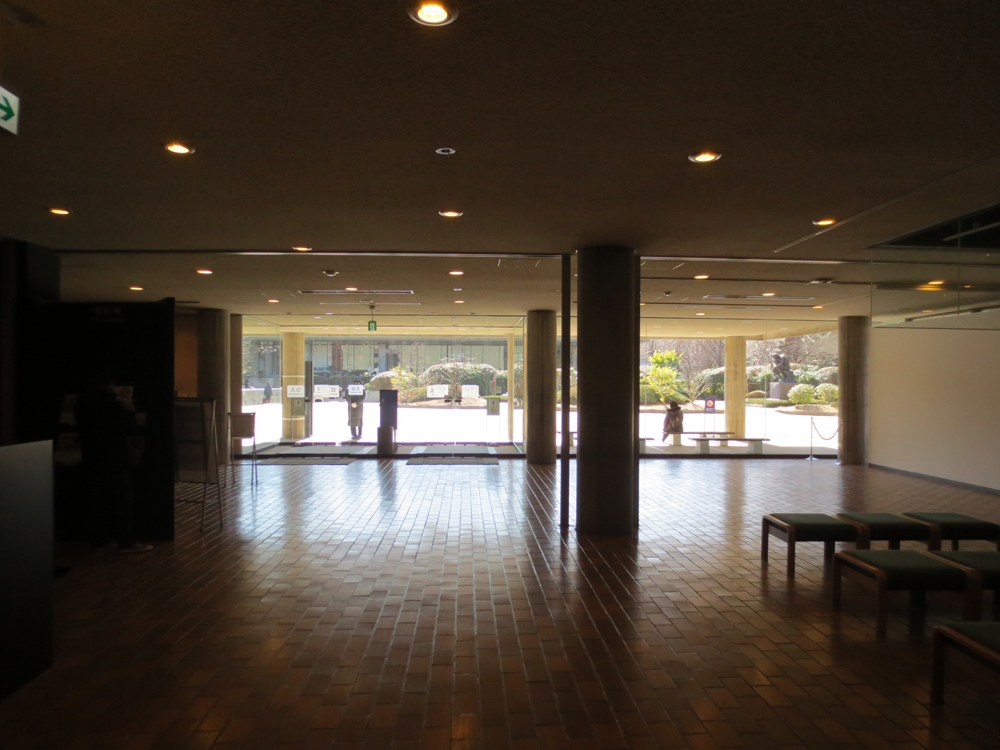 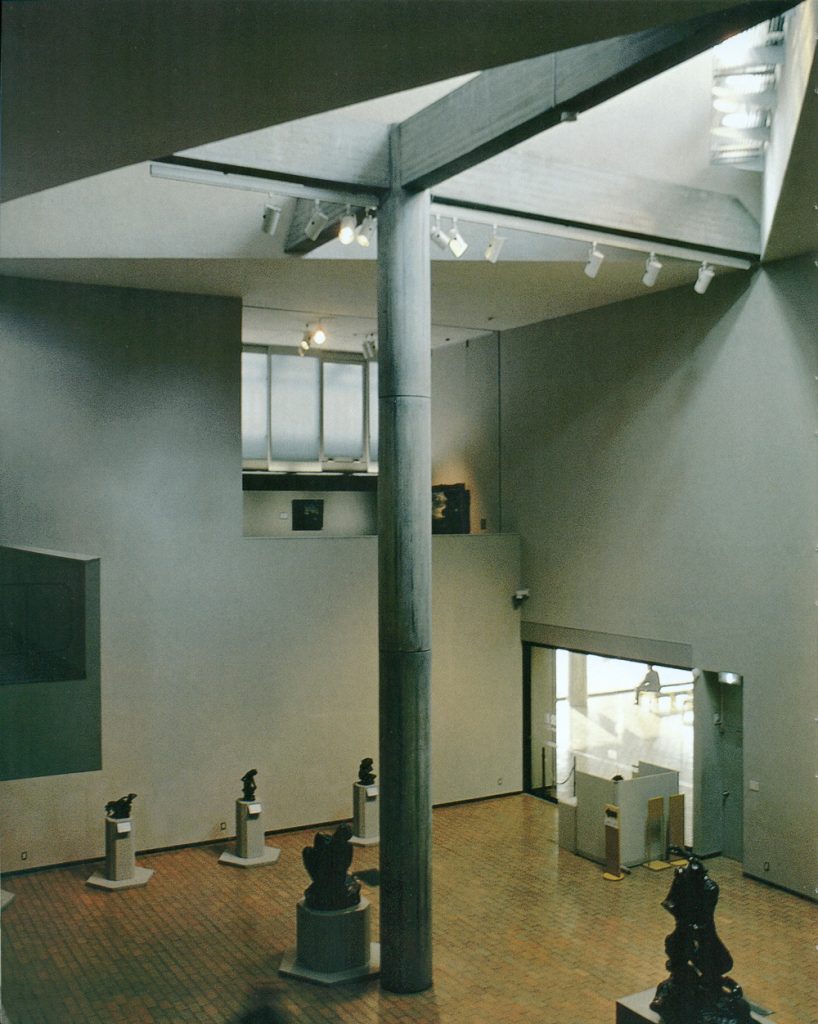