The Kaohsiung National Center for the Arts is locally called the Weiwuying Center because it is located where there used to be a park and a military field with that name. It is the most important cultural project in Taiwan since the eighties, in which the most modern technology was used to develop one of its central pieces, the theater. Historically known as a military training base, it became an artistic base, with the mission of promoting the development of the southern region of Taiwan.

The Kaohsiung National Arts Center symbolizes the transformation of the ancient port city into a modern and diverse city with a rich cultural climate. Starting with this transformation, Toyo Ito screened the Kaohsiung Stadium in 2009.

Mecanoo designed the Cultural Center as an integral part of the adjacent subtropical park, seeking to have a positive social impact on the residents of Kaohsiung, whose population has almost 3 million inhabitants.

The Cultural Center is located on a former military site, in the northeast corner of the 47-hectare Weiwuying Metropolitan Park, located in the ancient port city of Kaohsiung, south of the island of Taiwan.

Its organic shape was inspired by local Banyan trees with its iconic crowns. Kaohsiung citizens gather underneath the large canopies of banyan trees to hold daily gatherings, gatherings and events, and these trees with their leafy canopies were the starting point for the overall shape of the building. The vast undulating structure is made up of a leather and a roof and connects a wide range of functions.

The program includes a theater complex in the Wei-Wu-Ying Metropolitan Park, with a total capacity of 5,861 seats: 1981 in the concert hall, 2,236 in the Opera building, 1,210 in the game room and 434 in the hall of recitals. In addition, it has 800m2 dedicated to exhibition space, two conference rooms with capacity for 100 and 200 people and stage construction workshops.

The entire complex is surrounded by 7ha of green area. In these gardens, visitors can walk, practice Tai Chi or see stage performances, both on the street and in an open-air theater located on the roof of the structure, where it curves to the ground.

The Concert Halls and the Opera are located in the four nuclei or “legs” of the building, where the structure meets the ground, as if it were the trunks of the Banyan tree, rising to the wavy ceiling at 5m high and Sheltering a public space, the plaza, where the air can run freely. The nuclei are connected to each other through ceiling foyers and an underground floor that houses the service area, behind the stage of each theater.

Plaza Banyan is a unique semi-open public space, a curved surface that flows between corridors illuminated with natural light to result in overall transparency in a unique setting of creativity. Inspired by the lush fig trees in the park, architect Francine Houben of Mecanoo Architecten created the design that resembles tree trunks and shaded open spaces that create air routes to unify all downtown areas. On the south side of it, an 1150m2 outdoor opening, the amphitheater, can be used for different events.

The plaza works like a banyan and people react as if they were in the park sheltered from their shade, doing what they usually do under a tree, meeting, talking and even improvising a performance.

The Opera House was designed by a Dutch theater consulting firm and built by the Austrian firm Waagner-Biro. The Hall is mainly used for these shows, but also for large theatrical productions, dances and interdisciplinary performances. It received the name of “Opera” because this word encompasses all the performing arts, including theater, dance and musical performances.

The seats are arranged in a horseshoe shape. In the lower part they are divided into four areas by small partitions and the balconies of the second and third levels have continuous horizontal lines to provide continuity and a sense of rhythm.

This room is the largest installation of this type in Taiwan and the first in the country to have a central computer that helps with the staging. The mechanical stage equipment is fully automated and operated from a central computer. The orchestra pit elevator, in front of the stage, has an area of ​​80 square meters, which meets the requirements of a complete orchestra to perform large operas

The concert hall features a unique design that allows the audience, no matter the height, to enjoy the same acoustic and visual optical effects, taking care of each and every member of the audience. Seating arrangements surround the stage, bringing audiences closer to the stage for more intimate experiences with directors and artists.

The main stage consists of 5 rows with a total of 15 orchestra lifts. Hanging above the stage are acoustic shells with three preset positions, at 9m, 14m and 17.8m, which can be lowered or raised to meet the varied requirements of musical performances and band sizes. The height and angle of the acoustic covers can also be freely adjusted to suit any need, ensuring that the audience can enjoy the best quality sounds.

The pipe organ in the concert hall was manufactured by Johannes Klais Orgelbau, a century-old German manufacturer, and consists of 9,085 pipes, making it the largest organ of its type in Taiwan. The exterior design is consistent with the style of the interior and the asymmetrical arrangement of the symphonic organ and the echo organ creates an unprecedented sensational impact for the audience.

The Playhouse is a theatrical space that, like the Opera, has computer-assisted operation and, as in the Opera, the general design is carried out by a Dutch theater consulting company and the Austrian firm Waagner-Biro carries out the construction, manufacturing and detailed facilities.

In front of the stage are eight raised platforms and removable seats, allowing the stage to be set up both on the stage, on a push stage, or in a seating area with an orchestra pit.

The design of the push stage shortens the distance between the audience and the artists, so that the audience can perceive their emotions very closely, facilitating interaction between the two. In this format the Play House can accommodate 1067 seats.

When using the proscenium stage, with the orchestra elevator, the hall has a capacity of 1,231 seats.

The Recital Room is primarily for chamber music, solo recitals, or other smaller performances. Sound absorption can be adjusted to meet the needs of various types of performances, providing the optimal acoustic effect.

The design is a variation on the traditional shoebox style, where a curved and low dividing wall is erected surrounding the centerline of the seats to turn the Recital Hall into a vibrant and asymmetrical shoebox, while providing reflection of sounds Direct in the front seat area. A full circle of sound-absorbing curtains behind perforated wood paneling surrounds the upper half of the Recital Room. The size of the curtains used is determined by the genres to be presented.

The Open Air Theater is located south of the main structure, adjacent to Weiwuying Metropolitan Park. With the sky as a backdrop, the curved structure stretches from floor to ceiling. The design has also taken into account the wind and landscape directions. In addition to the magnificent sunset view, the open space allows the breeze to circulate. The curved line without borders and the seats break the design conventions of the performance space and the Amphitheater is an atypical theatrical space where the public can appreciate the most diverse performances.

The curved steel structure was built in cooperation between a shipbuilder from Kaohsiung and another from the Netherlands. Beneath this ceiling is Banyan Plaza, a generous and protected public space.

Designed with the subtropical climate in mind, the open structure allows the wind to blow freely through the plaza, creating a continuous flow between interior and exterior.

Inspired by the domes of banyan trees, the large canopy glides towards the ground in a smooth curve, blending seamlessly with the surrounding environment. The bulky roof has an area of ​​34,843m2.

The steel structure was covered with metal sheets, both inside and outside. Mecanoo used shipbuilding technology developed by CIG Architecture of Groningen, from Netherlands,  to design and build the skin that covers the entire building, which in turn contains theater spaces supported by weight-bearing structures.

The only 6mm thick steel cladding has a shape comparable to that of a nautical ship, but not in the tonnage of structural loads, since a building is subject to much less stress than a ship. And considering that ships typically use 8mm thick sheet metal, we can get an idea of ​​the static forces involved, making it relatively easy for designers and producers to assemble the building, due to the excellent control between design phases and execution. To obtain a surface as smooth as the inside of a seashell, the welds were made using the ceramic welding backing system, in which the supports between the parts to be welded are made of ceramic and applied to the back of the joint, so that the weld remains hidden within the visible surface. The result is perfect structural continuity thanks to the complete penetration of the weld, with equally important aesthetic benefits.

The design also offers occasional glimpses of the powerful grid structures inspired by Banyan trees, with all their aerial branches and roots. Making an all-steel building offers numerous benefits, including rapid construction and the widespread availability of skilled on-site labor, as Kaohsiung is a port city with many shipyards. The project took just two years, from 2007 to 2009, while field operations started in 2010 and were completed in 2013, a very short time relative to the size of the project (CIG Architecture) 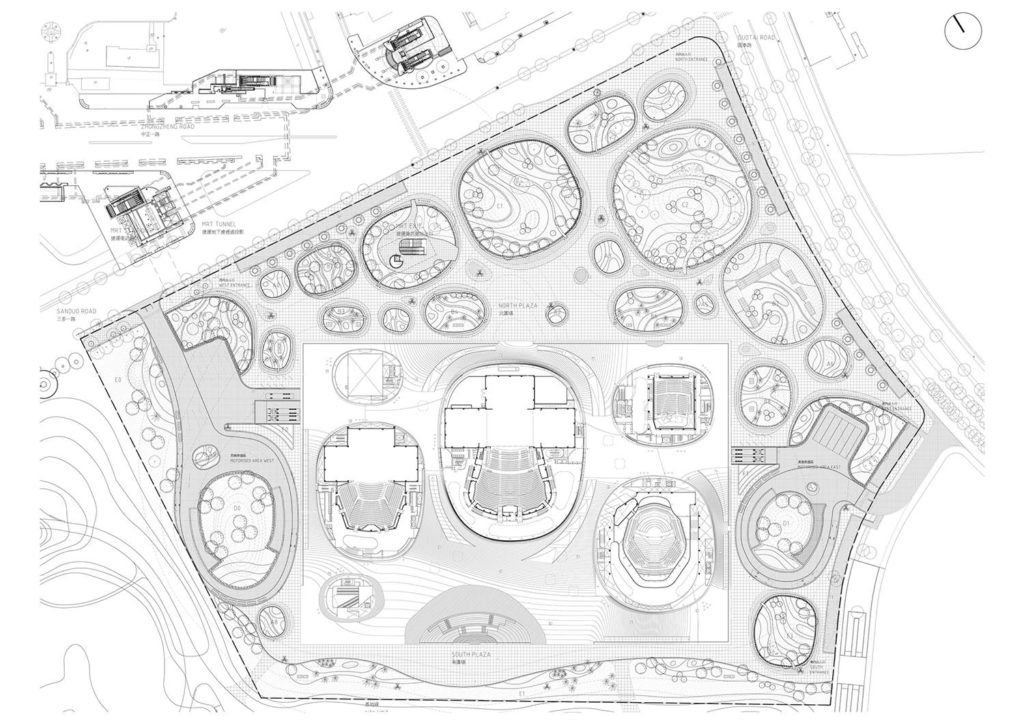 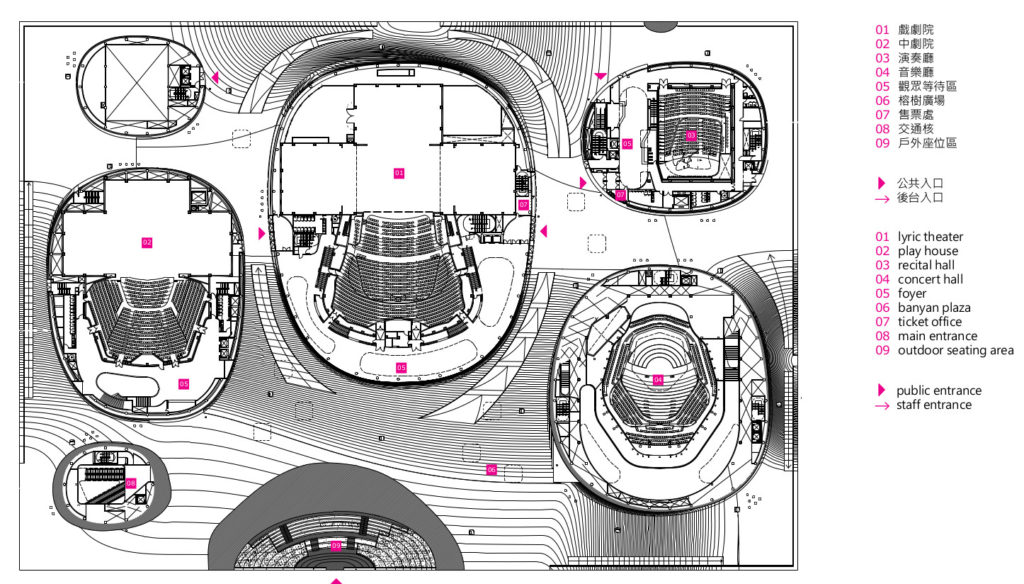 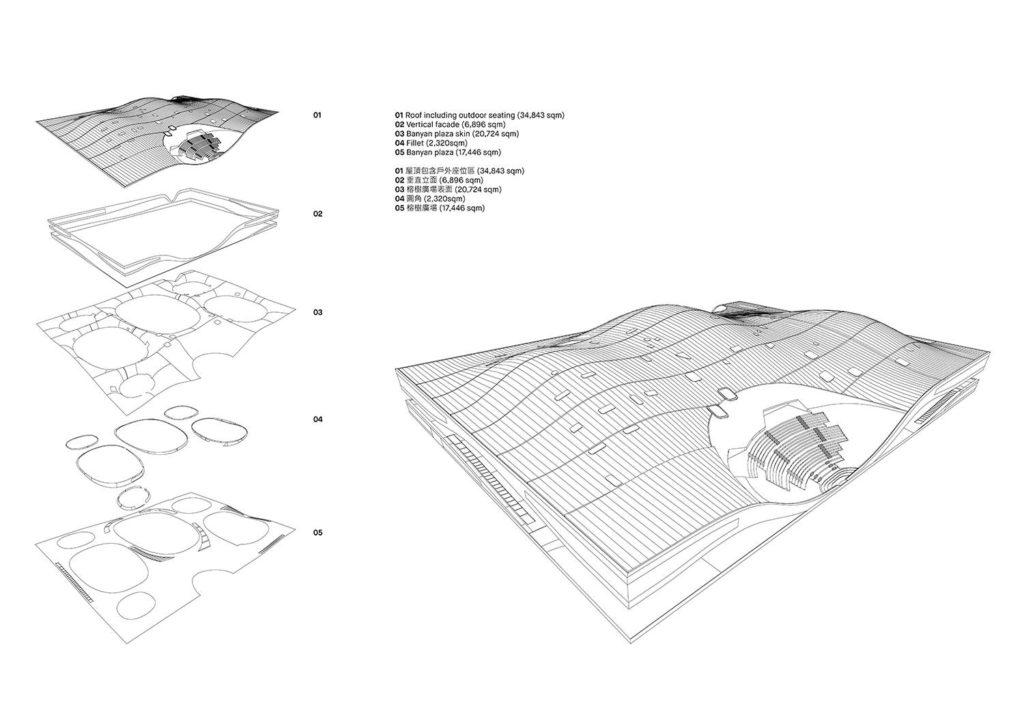 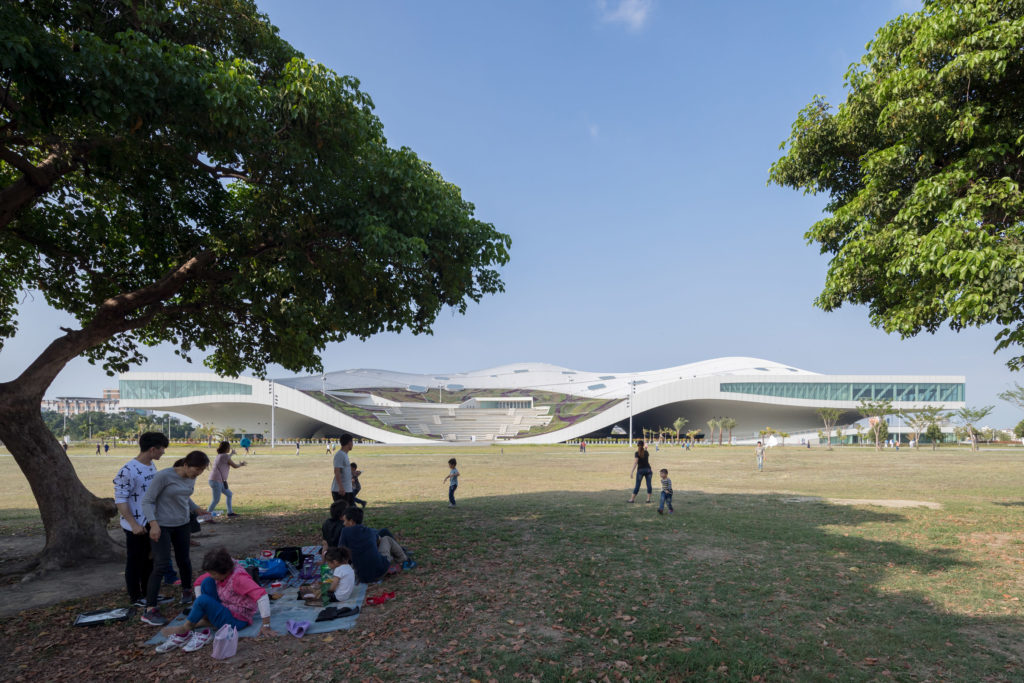 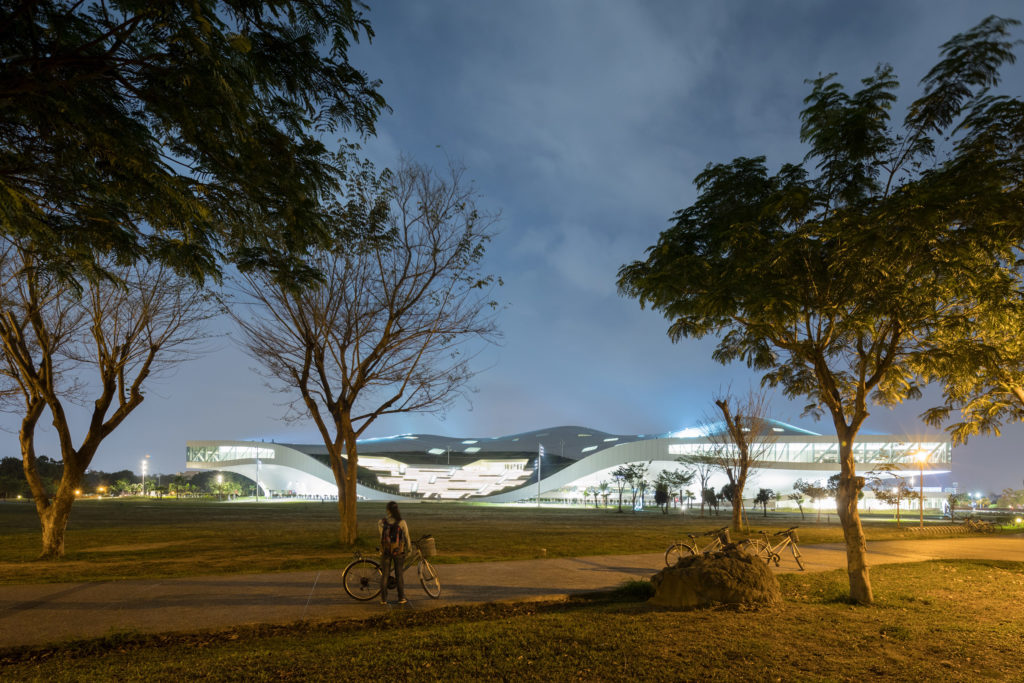 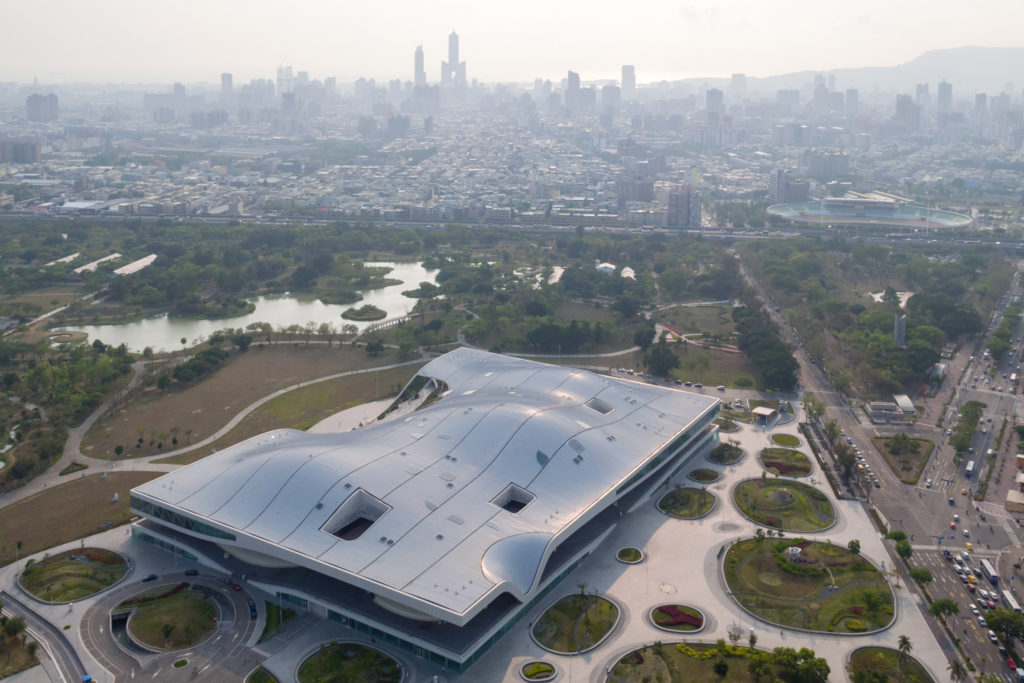 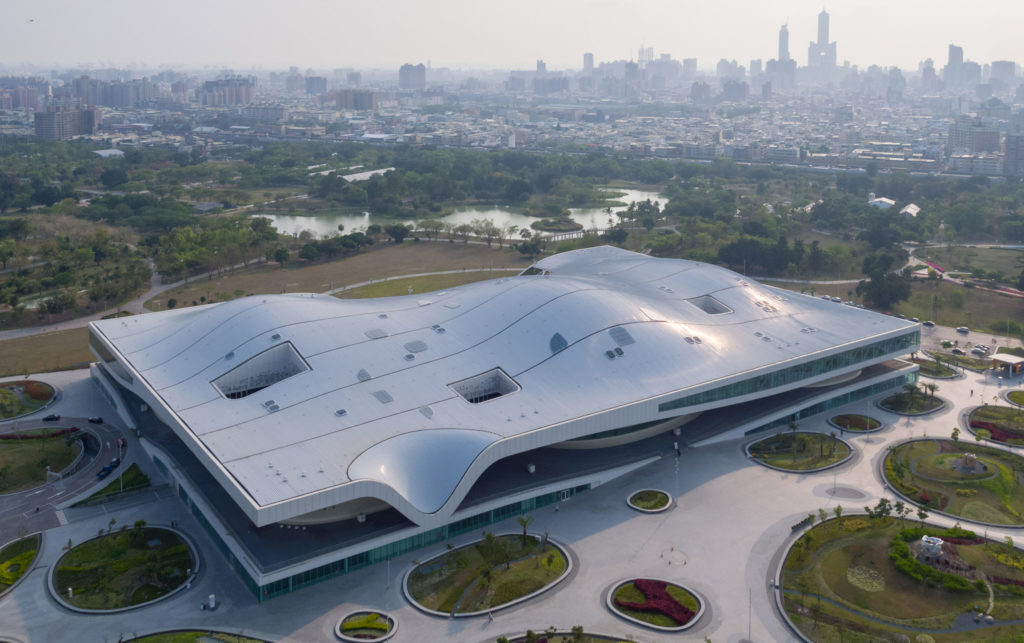 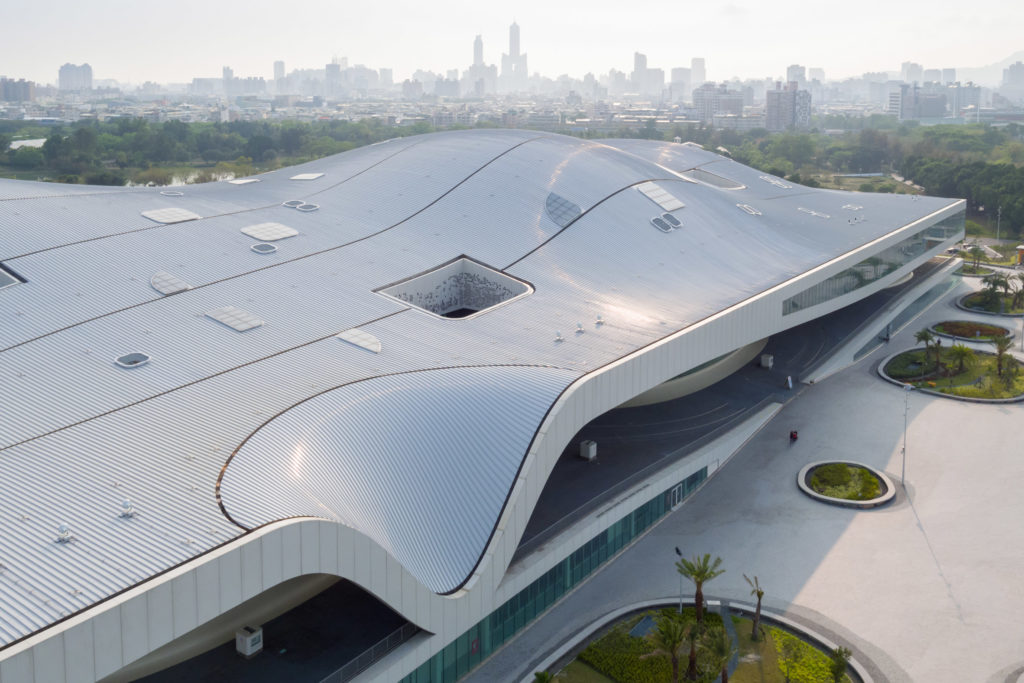 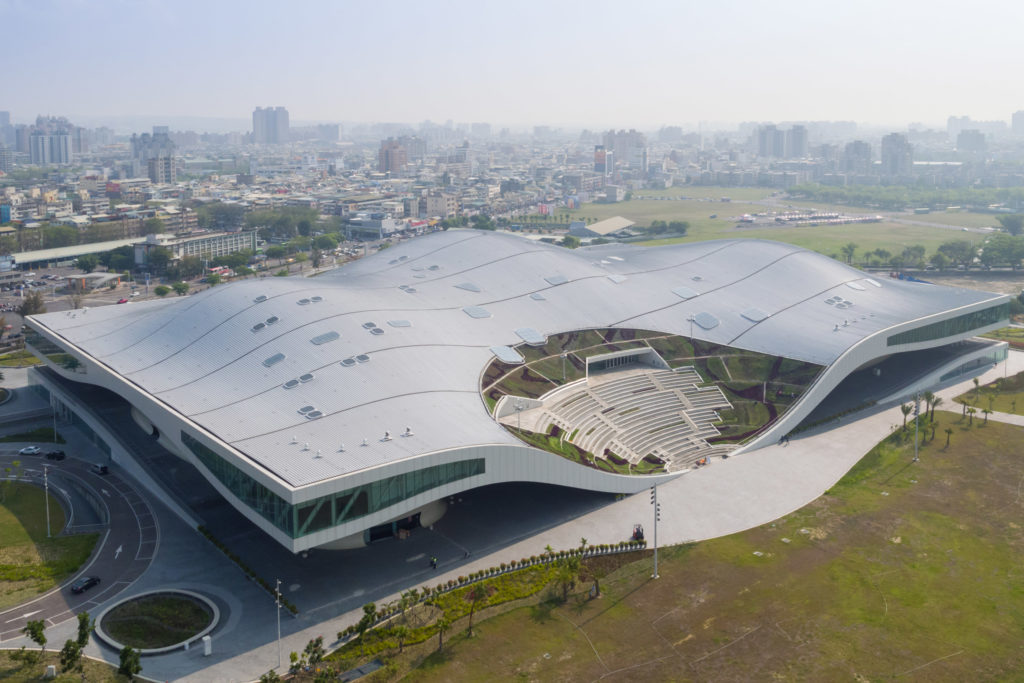 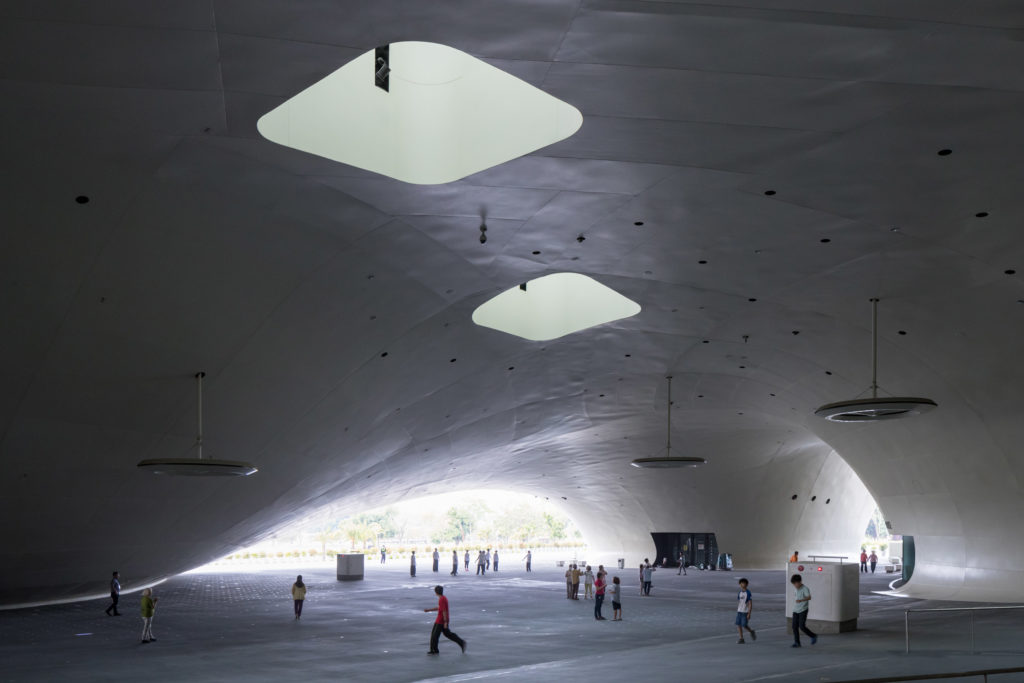 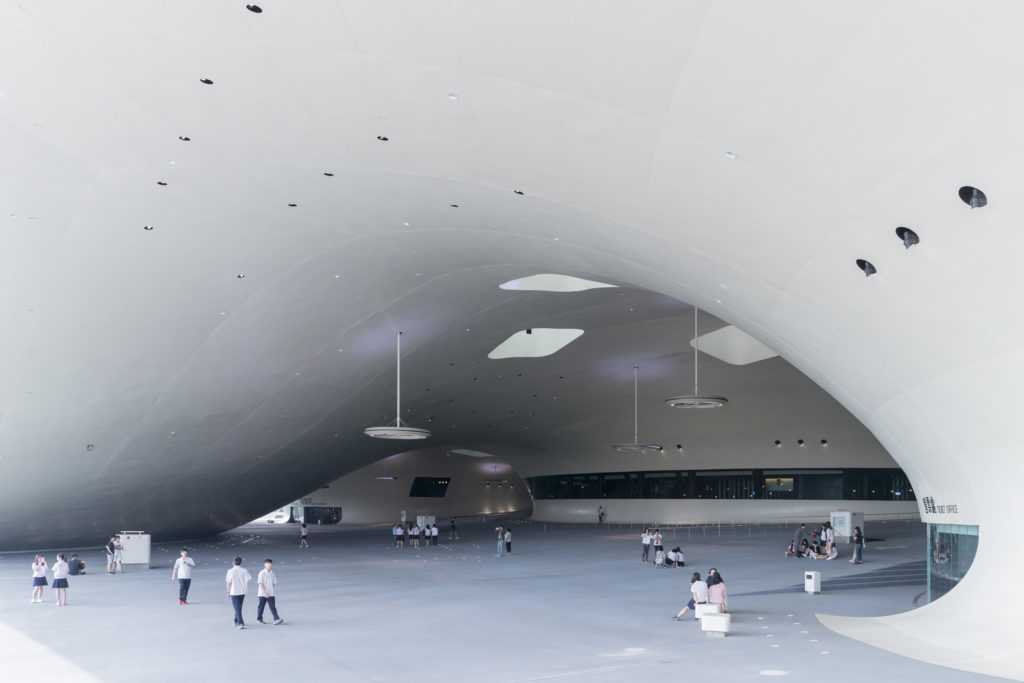 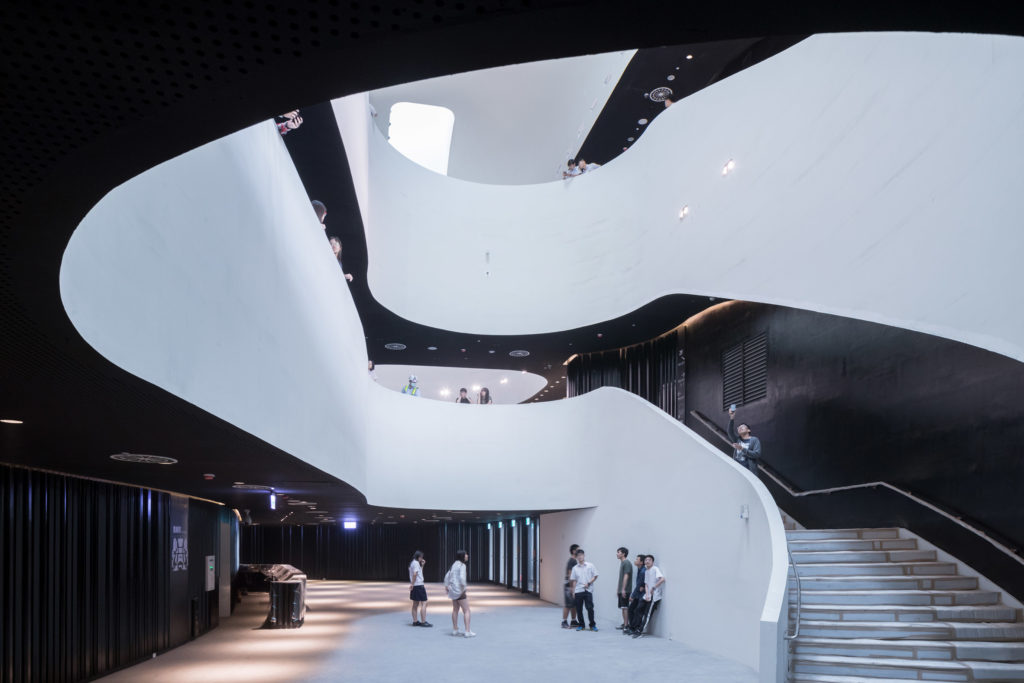 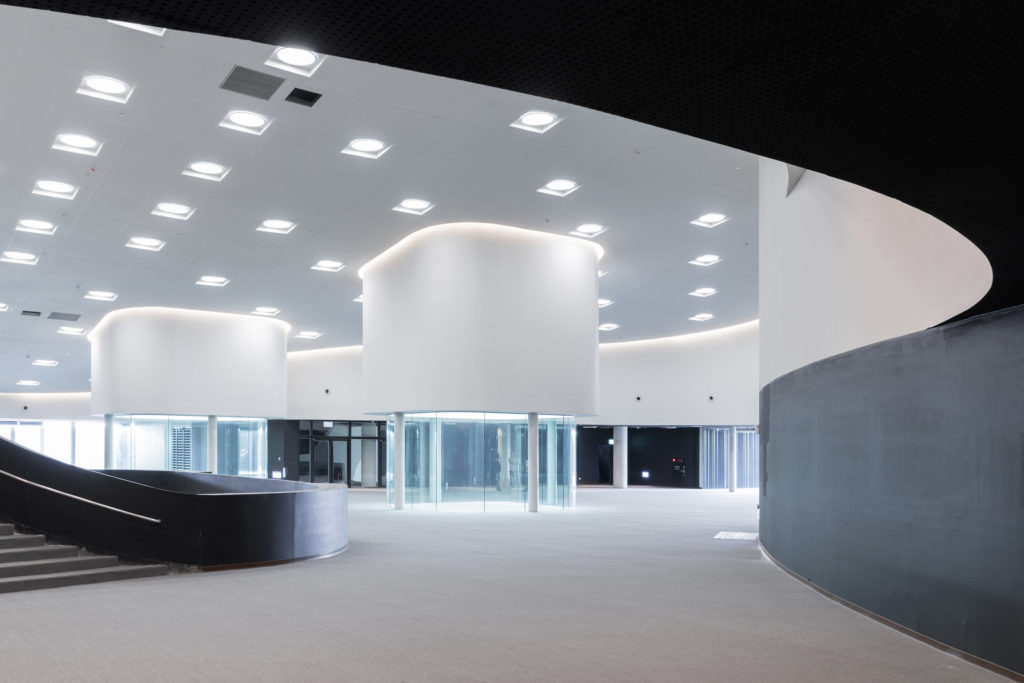 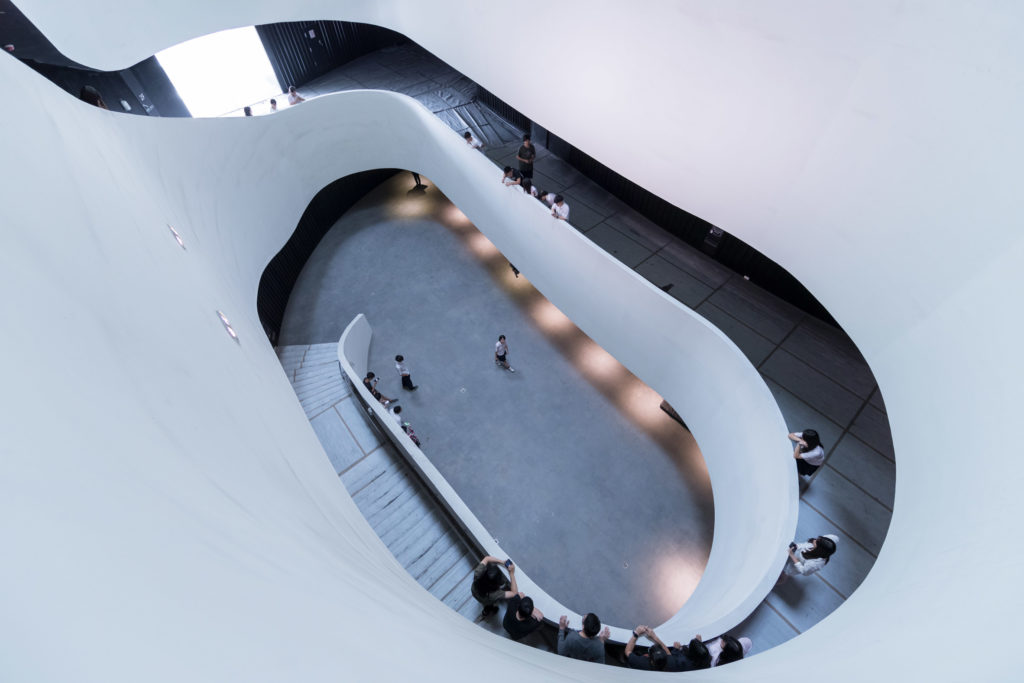 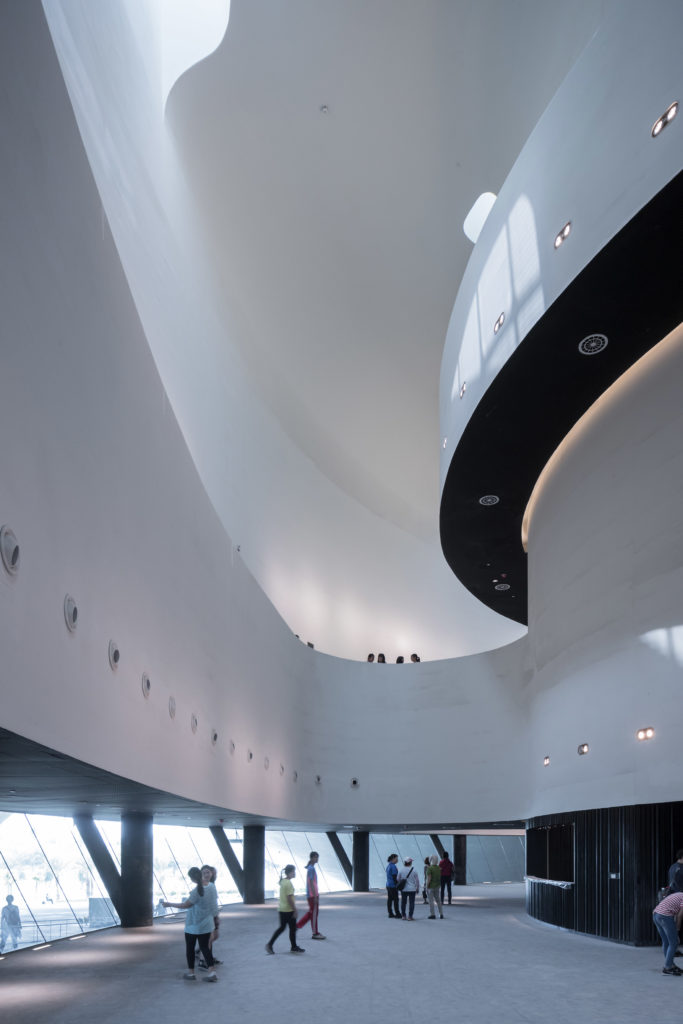 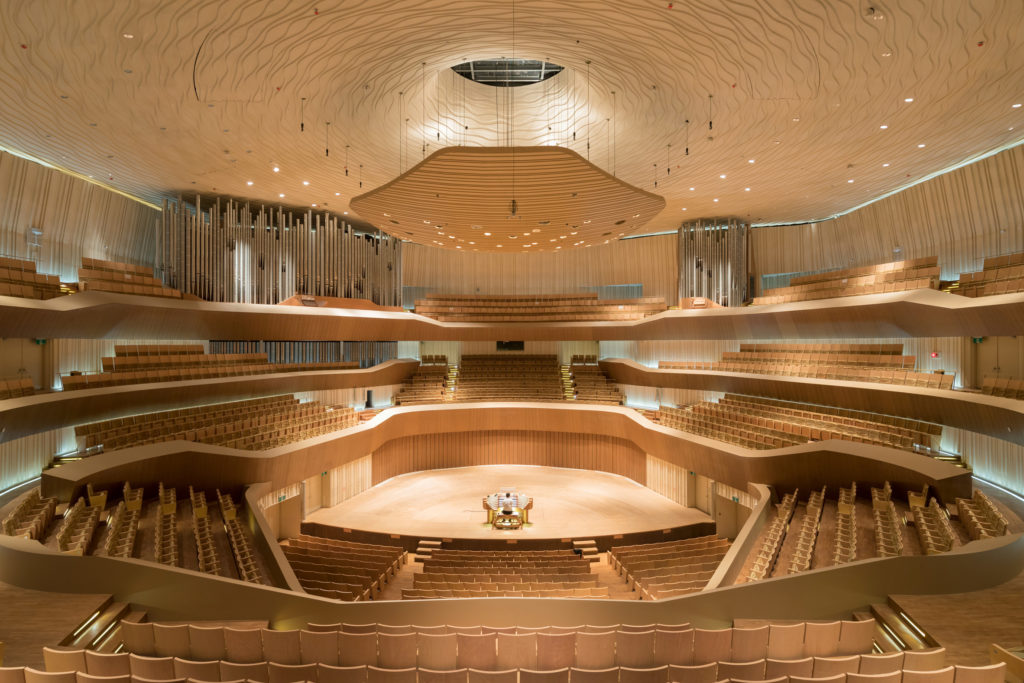 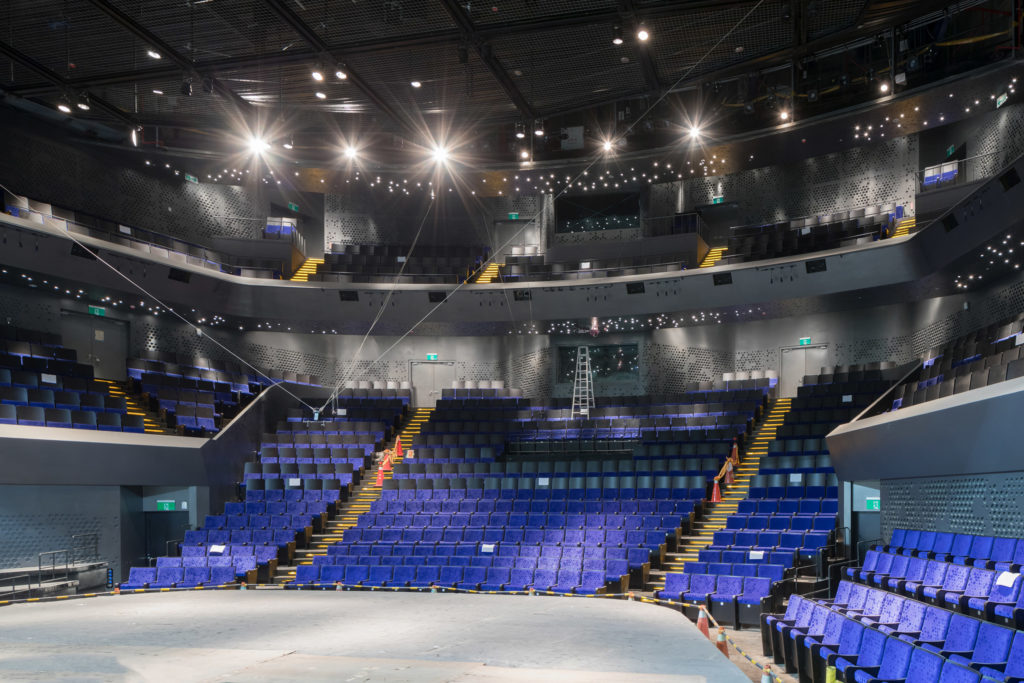 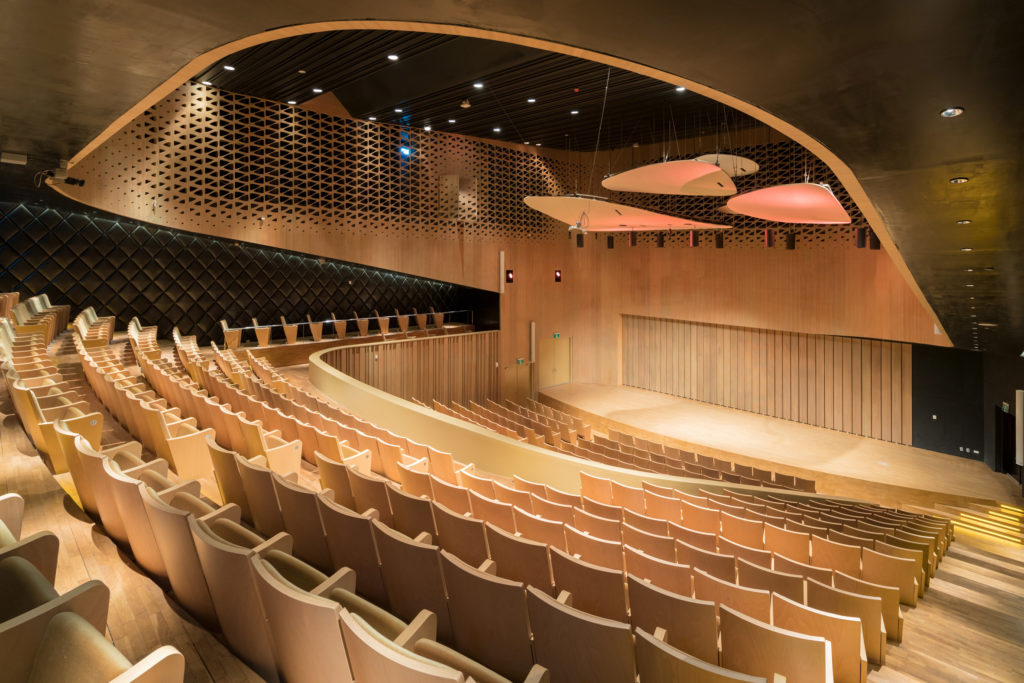 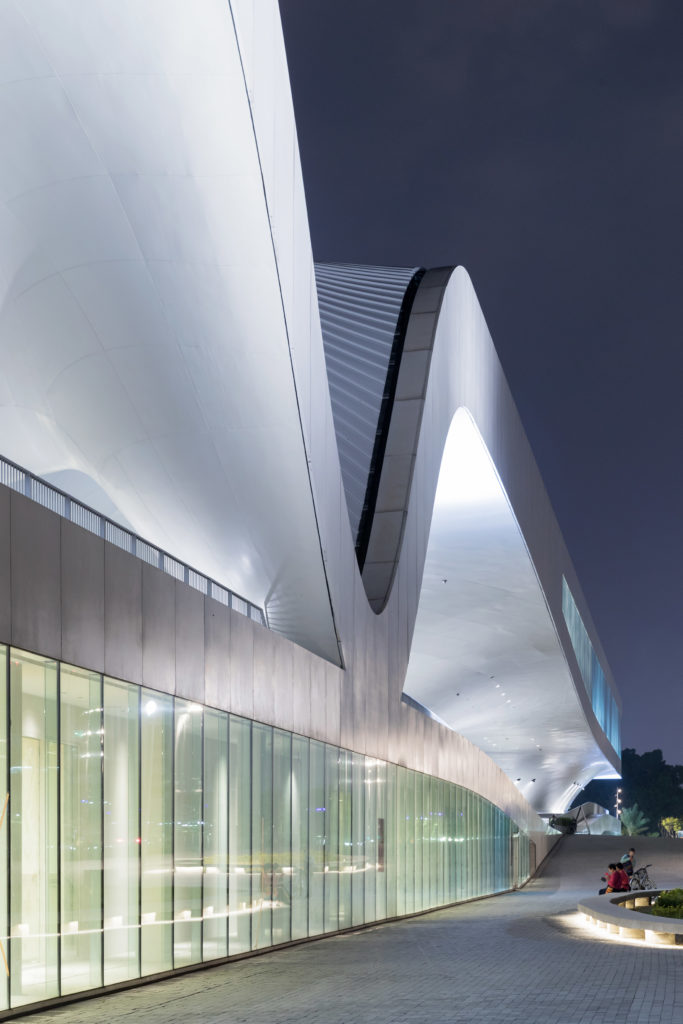 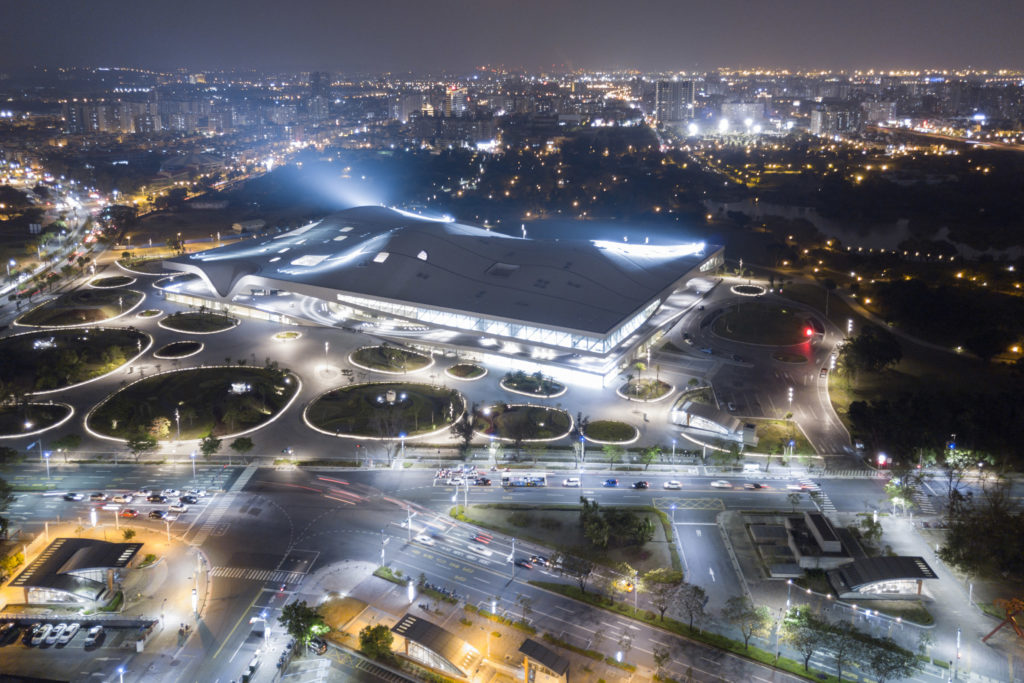