In the years following the Russian revolution, the house was the prototype commune in which they worked together the State and the Soviet architects. It was an attempt to bring communism to the heart of domestic life sharing not only housing, but in some cases the bedrooms, thus the individual’s daily routine would be fully controlled until the last minute.

Due to excessive population was immigration from the field in Soviet cities, any more than conventional apartment with one room finished becoming a “kommunalka” where several families shared kitchen and bathroom. According to the architects of the OSA, any apartment in a single plant could be re-partitioning, which is why architects designed new apartment models based on vertical separation, in the upstairs bedroom and a kitchen / living at the bottom.

From 1920 new architects proposed some changes in the type of housing, although group remained in many respects, also allowed some freedom and privacy, as is the case of Narkomfin building designed by the Association of Contemporary Architects, addressed by Moisei Ginzburg and Ignaty Milinis clear example of Russian Constructivism.

Following the rise of Stalin collectivist and feminist ideas were denounced as Trotskyist, frustrating the plants to convert Narkomfin a model for the entire Soviet Union. Although the building was originally intended to house workers Narkomfin eventually became home to important positions of the nomenklatura. The finance minister was the first to settle there. The building was thus function as a hotel with good service, but never encouraged collaboration among the first group homes.

It was built on the boulevard Novinsky 25 (Korpus B), Moscow, Russia (former USSR)

In late 1920, showed that although new architects advocated a communal lifestyle, advocated greater individual freedom, since the existing system until it was hard to make it work in general because of inequalities of people. Behind the building were hidden utopian ideals and reformers who sought to improve the daily lives of its occupants.

Although the houses have a series of collective services and supplies, believed that each person had to have their “own personal space” to spend time alone or with people close. As a first prototype of this new paradigm “transitional” of collective life, built the Narkomfin (short for People’s Commissariat of Finance) in Moscow between 1928 and 1932.

In Narkomfin, Ginzburg, constructivist leader, broke with traditional forms of construction, spatial composition and architecture of the complex show the radical search for a new contemporary apartment blocks. The building would become a prototype of the modern apartment blocks and housing estates throughout Europe.

It was the first building constructed according to the five principles of Le Corbusier and Bauhaus professor Hinnerk Scheper who worked with color schemes. Le Corbusier, Narkomfin recognized the influence that had on him and his Unite d´habitation of Marseille, from 1946 to 1952.

Under the bill, the Narkomfin complex had to be composed of 4 buildings: a dining room, with pre-cooked food, gym, solarium, gardens, a block and a daycare service. The block of services are only half finished and the building of the kindergarten was never built and occupied the gym. A library, a two-level garden on the roof and a solarium and recreation areas together with shared kitchen and communal dining hall were completed.

At its completion it was a set consisting of three buildings: the building of houses, community block from the former by a covered walkway on the first floor, and a small building which played the role of laundry.

The apartments, 54 units in total, were organized along two broad horizontal corridors, lobby along with the rooftop garden were designed as a meeting between the neighbors. At both ends of the block were stairs.

The apartments were of different types.

These apartments have a small kitchen from 4.5 square meters, a large dining room with double height.

On the upper floor two bedrooms and a bathroom. These flats were designed for families who still followed the traditional way of life.

These one-room apartments were designed for singles or young couples. The room was 3.6 meters tall and had a bedroom upstairs. In this type of story, instead of a kitchen was an “element of cooking” and instead of bath, shower and toilet. The idea was that the occupants of these flats would prefer to prepare their meals in communal kitchens rather than in their small kitchen “niche”

In other communal buildings after it was decided to not even put this type of stove, depriving their occupants choose to do.

On the terrace of the building had a set of living quarters for one or two people, double height and F cells with a shower shared between two rooms and no kitchen. These units are benefiting from the beer garden, which was on deck and two rooms, a living room, looking west and the other bedroom, east thereby allowing sunlight to take all day.

With the division into two levels, duplex, floors and carefully chosen color scheme for your decor, seemed more spacious apartments than they were. All apartments have windows on both sides of the front for easy ventilation. The bedroom faced the east and the living rooms, one of whose walls is almost all glass, to the west. This allowed to wake up at sunrise and enjoy the fantastic evening. A few floors are reached by the lower level and others at the top, in what might seem like a puzzle duplex.

The long and elegant facade of the Narkomfin, with horizontal rows of windows and the top deck of the attic were to be dubbed “the ship”

The large glass building is connected to the main building by a bridge and in the community services offered, such as kitchen, canteen, library, gym and nursery.

The laundry was in a small building opposite the main block and is accessed by a special path through a small park.

This is a framed structure on piles low with 4 meters except the volume ends with unique character, made of reinforced concrete in situ.

The foundation was made with isolated footings.

The building stands on stilts, creating a large communal space covered on the ground floor.

The location east, southeast in the rooms will they be open to the broad tree lined block center.

The disclosures are made through two nuclei at the ends of the main building and the building of community services. Internal communication takes place on two levels, on the first floor through a wide corridor that provides access to housing “K” and that in turn connects the two volumes and on the fourth floor hallway which gives access to housing “F”

The common services building, is separated from the main building on the ground floor, which gives some independence and allows its use by people who do not live in Narkomfin.

The complex has ample parking that serves the entire block.

The Narkomfin is built in reinforced concrete. Everything in this building was innovative, since the technique of imitating the basis of concrete stone, concrete similar to that used in the construction of the Bauhaus to the special design of the metal frames of windows.

Because of the lack of housing in Moscow, the building was modified without respecting the original design. Departments were built on the ground floor, where they were originally dismissed build apartments for people going down the street could not look inside.

Another of the assaults on the building was the construction of an adjoining building in the eclectic style that broke its Stalinist aesthetic harmony.

Inside also made changes, this view by the occupants themselves. Some of them rejected the proposed lifestyle and adapted their distribution. The most common change was to install a bigger kitchen than they did pre-installed in the apartments.

The building has been seriously deteriorated over the years

Neither was successful rooftop garden, which was very little used, the building looking at the American Embassy, which discourage the occupants to use.

The building has destroyed nearly three decades and is in a sorry state, although it exerted a great influence on modern architecture. Many see it as a symbol of a “failed regime”, others as an outdated model homes. The Narkomfin is not included in the recovery program of building and monuments to the Russian government is doing.

Only a small proportion of apartments are occupied and the rest was purchased in 2008 by an estate agency with the idea of giving the grandson of Moisei Ginzburg and doing remodeling work as apart-hotel. If you make these plans, the Narkomfin not be the first building saved by a utopian communism “oligarchic capitalism.” 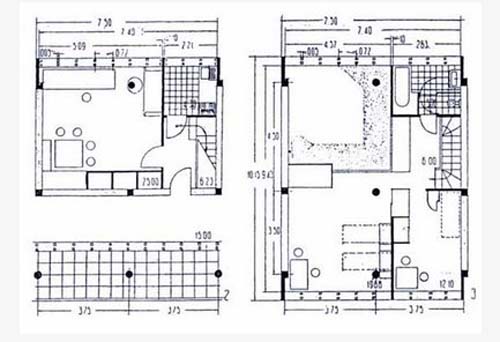 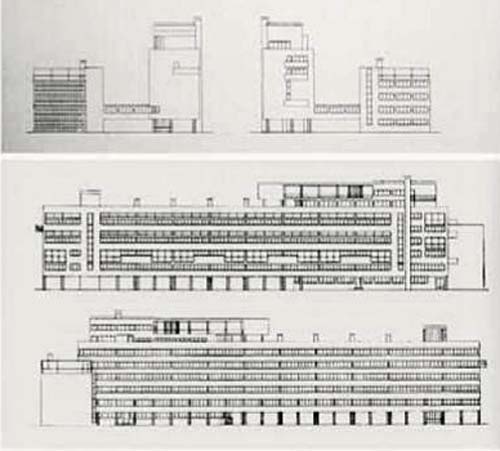 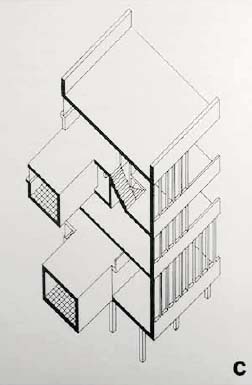 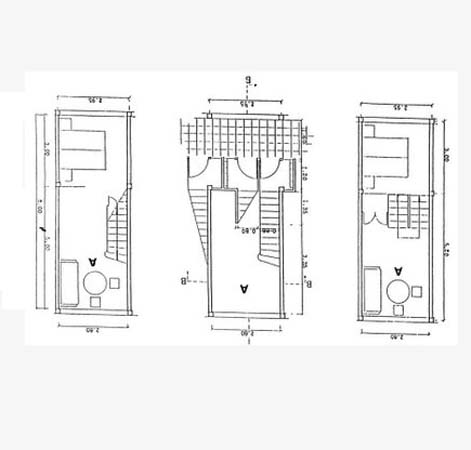 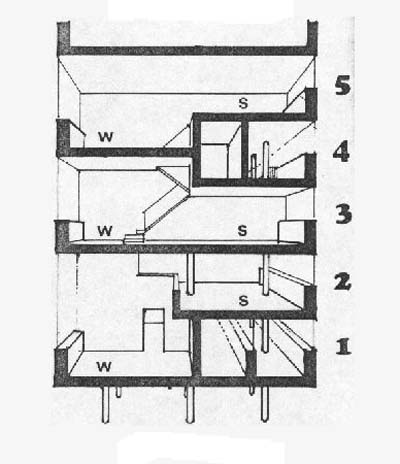 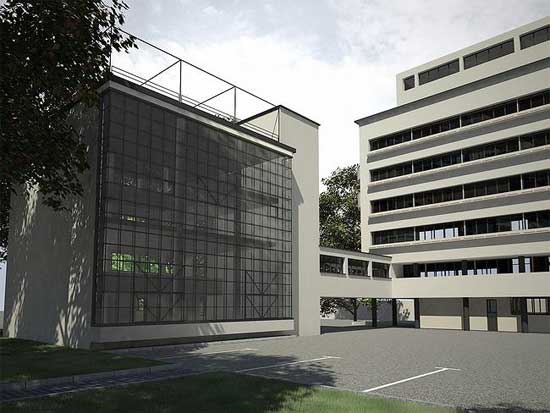 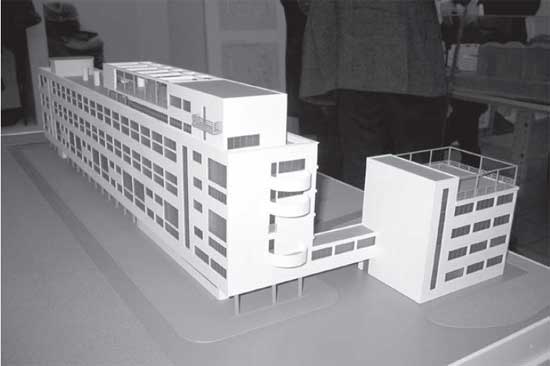 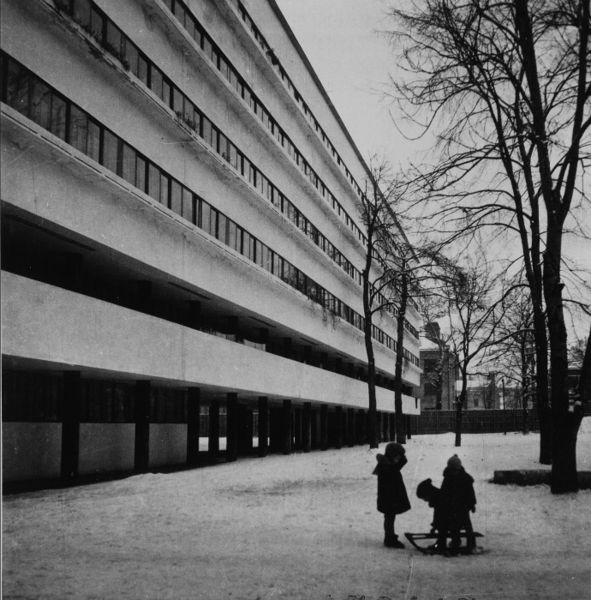 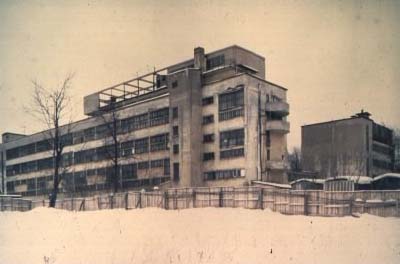 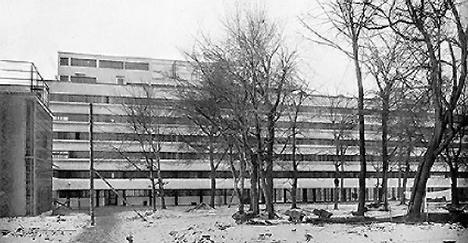 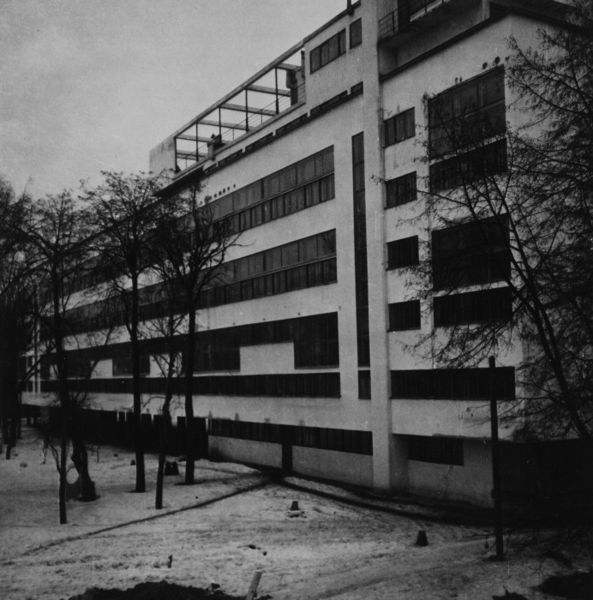 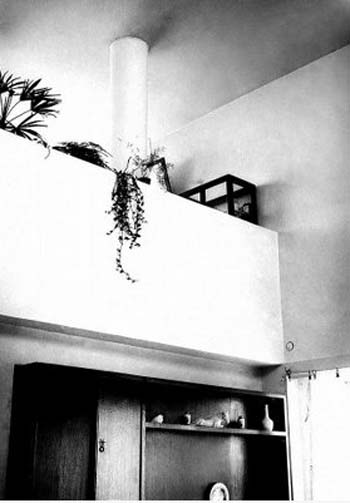 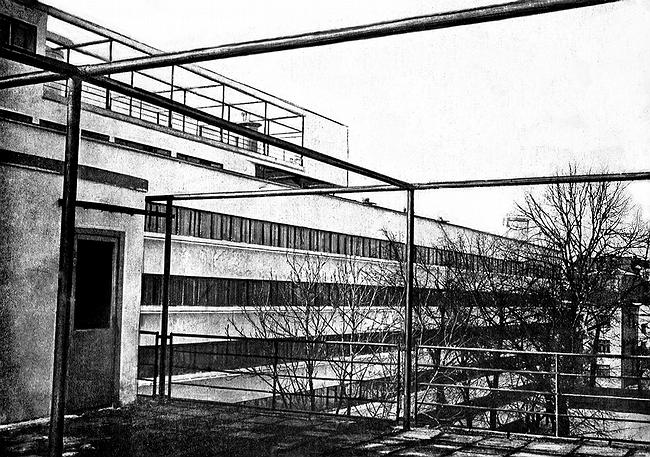 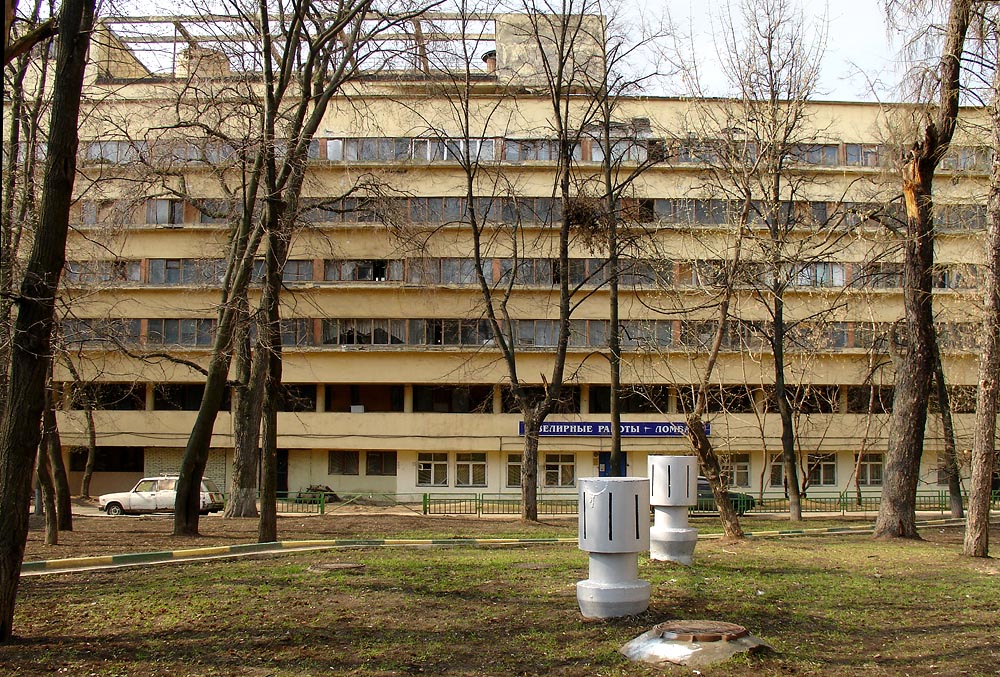 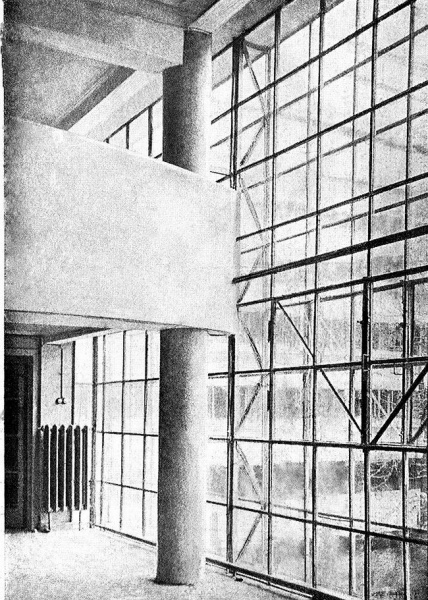 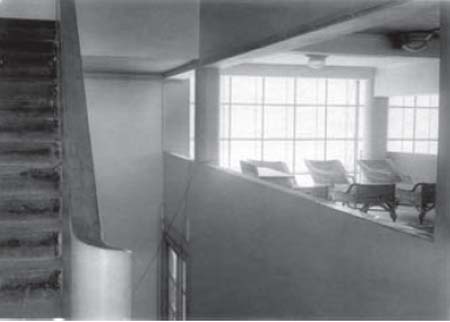 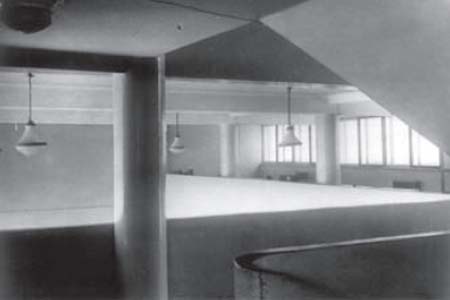 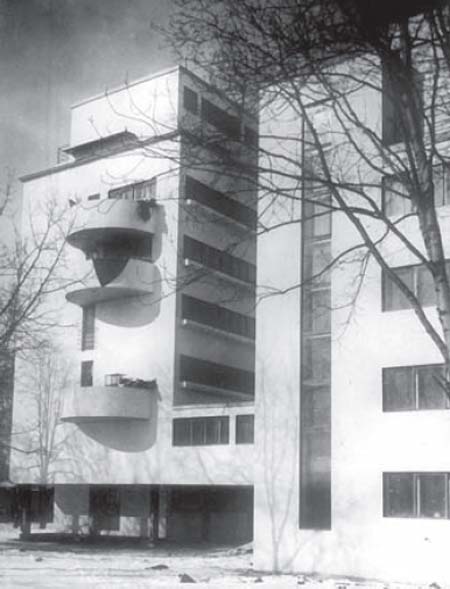 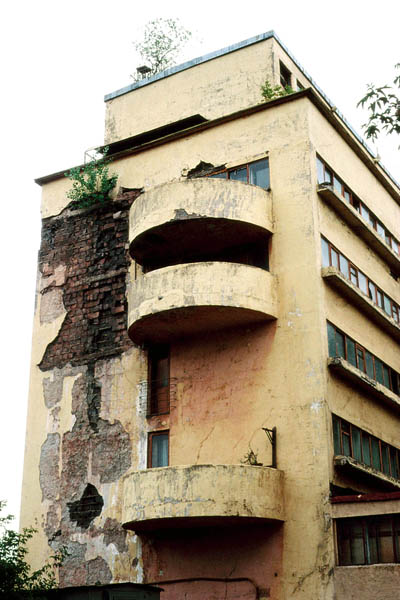 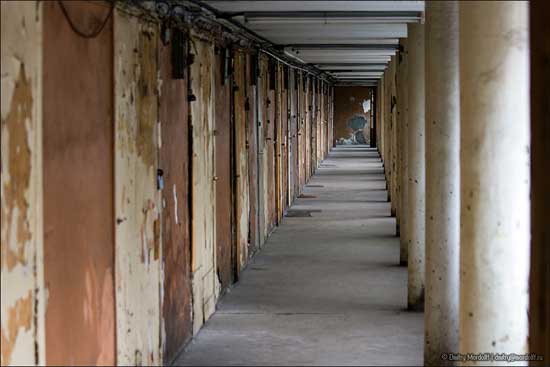 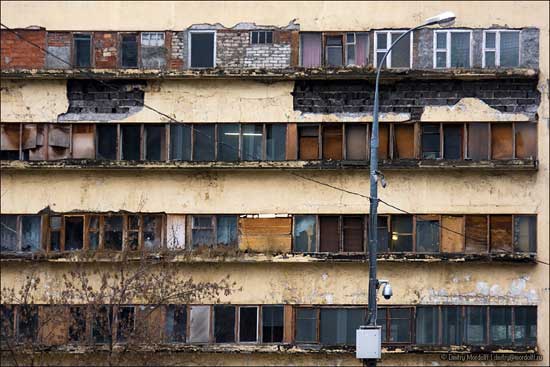 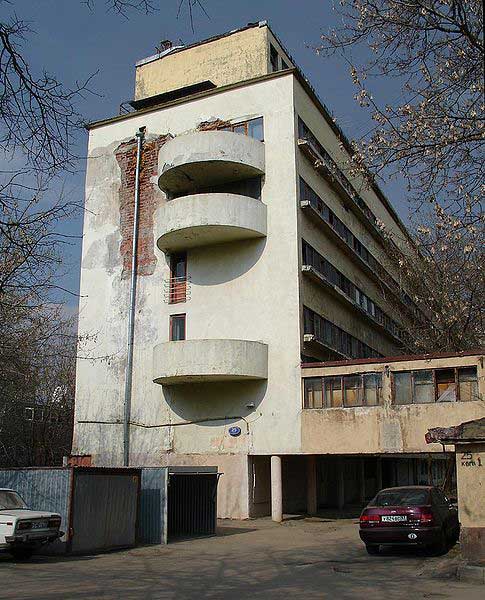