The Nagakin Capsule Tower is the first built in 1972, building based on the idea of ​​habitats capsules. Its architect, Kisho Kurokawa, conceived this project as a mega-structure in which the habitable prefabricated modules are inserted, showing through their design ideas interchangeability, recyclability and sustainability in architectural works.
Due to its location in one of the neighborhoods most economic activity of the city of Tokyo, Japan, the building was designed especially for those working in central Tokyo but living in the suburbs, at considerable distances or even in other cities, but that business had to stay in central Tokyo. Therefore the project had the function of serving as a hotel bedroom or studio building.

“… Studies towers are typically used by companies that need their employees are in Tokyo. They are also used as artist studios or offices… “(Kisho Kurokawa)

The project Nagakin Capsule Tower consists of two towers or structural cores of eleven thirteen stories high that incorporate the services and facilities; 140 capsules to 8 different types are attached. The set comes complete with a ground floor located a cafe and a first floor where offices are located.

Unlike traditional Japanese architecture, Nagakin Capsule Tower is not a finished or complete architecture, it is considered as a building changing over time. Despite this, it not completely ignores the tradition, because in the small scale of the design of the capsules is the proportion of Japanese tatami.

Although capsules were well equipped, the high price of these, because of the high manufacturing cost and location of the building in one of the most expensive neighborhoods of Tokyo made were bought mostly by companies and not by private owners.
The decay of the building made in 2007 was decided to demolish despite requests against it including his own Kisho Kurokawa. Today the building is still standing and several of its owners strive to restore capsules they own and intend to revitalize the whole. Some arguments have emerged in favor of demolition are the use of asbestos in its construction, the building little resistance against earthquakes and the low percentage of land use solar (the construction of a new building that would increase proposed 60% land cover).
Given these drawbacks, Kurokawa criticized the capitalist mentality with which the project and the little maintenance that has made this look. He also proposed, following the philosophy of the building, “unplug” capsules to replace them, leaving the towers as architecture that endures.
After the architect’s death in 2007 the building is abandoned and is now one of the last Metabolists buildings still standing.

The Nagakin Capsule Tower stands at Tokyo, Japan, in the district of Ginza, one of the most expensive neighborhoods of the city, as its name, which translates as silver district. This is a focal point of the city where both the business and business is concentrated.

As the economic and technological development is growing cities face increasingly inordinate population growth leading to consider issues related to the territory of the cities. In response to these problems, born in the fifties the idea of ​​mega-structure.

The concept of “mega structure” is given in the architecture of several countries simultaneously, and while maintaining a common idea, every author defines it a little differently. 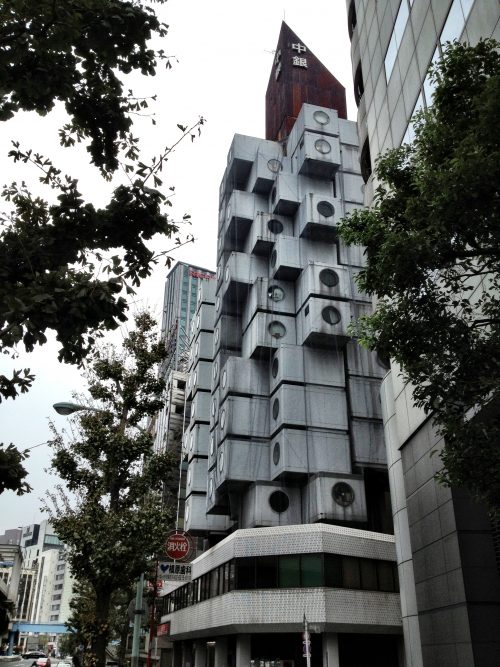 According Fumihiko Maki member Metabolist gurpo Japanese, the concept of Megastructure is defined as:
“… A large structure which has room for all the functions of a city or part of it… The development of modern technology has done its existence possible… it is in some ways an artificial feature of the landscape…” ( Fumihiko Maki “Investigations in Collective Form”, St. Louis, 1964, p. 8)

For Kenzo Tange, Metabolist movement leader and a benchmark of Japanese architecture of the period, one mega structure is:
“… A way to scale the human mass, which includes a Mega-Form and discrete units combined quickly, which fit into the larger structure…”

While Ralph Wilcoxon projects librarian at the College of Environmental Design, Berkeley; megaestrcutura is not only one:
… Large structure, but also a structure that often:

From the idea arises Megastructure Japan Metabolism in the sixties. This movement is made up of young architects among them Kenso Tange and Takashi Asada. The current ranges from architecture and urbanism to industrial design. Metabolism looking synthesis of public and private spaces and reflected the latter in the form of capsules of small size that are produced industrially.

As the name says, the metabolism is also related to the idea of ​​nature and impermanence of things, traits, moreover, characteristic of Japanese culture. Metabolism presents a dynamic and changing city, which behaves more like a living thing as a static object, where the fixed parts of variables are distinguished; a flexible, changing, dynamic and has the possibility of extending the system. The Metabolists use technology to create projects where there is still more monumental part to which cells are attached, as if it were a hive. These projects therefore can easily distinguish the idea and the idea Megastructure capsule or module.

“Human society is like a vital process, a continuous development of the atom to the nebula. The reason why we use the biological term “metabolism” is that we believe that design and technology should denote human vitality “(Kisho Kurokawa) 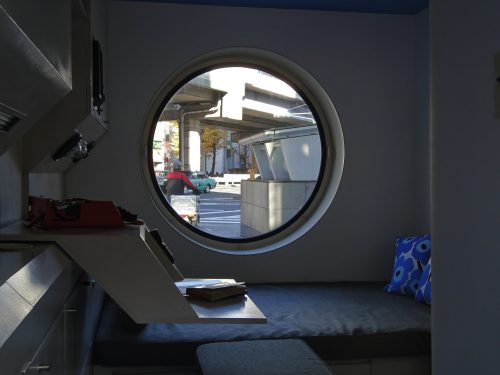 The capsules are devised as modules covering the basic needs of a cabin. They are designed as an inexpensive piece that will be built at the factory and transported to the building site to be inserted in situ, so it should be easily transportable and lightweight. Since it is expected to last approximately twenty capsules years maximum, they should also be easily replaceable.

These prefabricated cells have dimensions of 4 x 2.5 m. Eight types of capsules according to the position of the window, the arrangement of the entrance and placement of furniture finishing materials are projected. As a result of these types capsules super-deluxe, deluxe and standard emerge. The equipment of each type of capsule varies, but always as basic elements remain the bed, closets for clothes, desk, full bathroom, telephone, air conditioning, color TV, audio equipment, sheets, blankets, toothbrushes and utensils normally offered by hotels. Although this variety of capsules not all of them came into production was projected.

The building consists basically of the towers or structural axes, facilities and capsules.

Due to the expected lifetime of the capsules and the possible use of these changing, the building was divided into three areas: the structural axes, capsules and equipment. A laminate of prefabricated piping system where each unit consisted of a set of flat bars divided into six zinc pipes containing hot water, cold water and drainage was used. Each unit served three floors. The construction of the elevators also made from prefabricated parts and three-dimensional structures, which was a quick assembly, this does not stop being effective.

Facilities capsules joined by flexible tubes of a meter. Some openings in the floor of the capsules allow access to these tubes for connection, testing and repair.

Structural joints: The bonds of the capsules with structural towers were made possible by the use of cranes. They raised capsules and placed at the desired height to be welded to the tower site.

The towers, besides being the structural basis of the project, also contain building entrances and vertical communication cores contain the equipment and facilities of the project and are the heart that is “plugged” capsules. The base of the building and the towers were built with a rigid structure of steel and reinforced concrete, leaving the lighter construction materials capsules.

The capsules were designed as prefabricated modules designed so that all contain the same parts, factory assembled, in order to transfer the finished capsules to work for placement in the building. The capsules adhere to the cores by four bolts high strength. The process of building these works similar to shipping containers, where a box-shaped structure of steel, as light as possible, to which all other parts are welded. 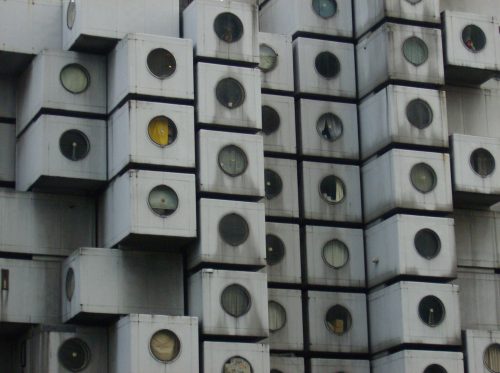 The exterior of the capsules is composed of panels of galvanized steel of 1 x 2 m 2 x 3 m. These measures are due to the number required for the manufacture of all capsules and the small size of the factories where they are produced panels. The galvanized steel panels also received a treatment based paint and bright spray called Kenitex to prevent the formation of rust and corrosion.

For the fire resistance of the building, the structural elements were coated with a layer of asbestos spray about 45 mm thick. Exterior panels also covered with a layer about 30 mm thick of the same substance.

Structural cores are constructed of rigid steel frames and concrete. From the ground floor to the second floor it was used reinforced concrete while the upper floors lightweight concrete was used. To use as soon as possible of the stairs, precast concrete was used in the construction of the towers in soils and plant entrances to the elevators.

The capsules are composed of steel boxes and finished with galvanized steel panels reinforced those who are given an anti oxide and a layer of spray Kenitex.

The execution on site had several problems related to the transport of the material. On the one hand, being a location in the city center, the trucks could only reach the sun at certain times of day. The site was also reduced in size considering that the work had to arrive and remain stored until its use in construction many large prefabricated elements. All these problems are not envisaged by the project team, made only could carry and set a specific number of capsules a day, slowing somehow placing.

Not only it met the legal requirements of security in the building, but he was also endowed with extra escape routes in case of fire. The advantage of having two vertical communication cores was that it increased the number of escape routes. The stairways were joined by several points creating floors and both were united and floors that were independent.