Museum of Underwater Archaeology in Cartagena

Cartagena, continuing in the footsteps of the already extensive experience in waterfront arrivals from the United States, with relevant examples in some Spanish cities like Barcelona and Vigo, decided a few years ago to colonize the land of the spring of Alfonso XII, hitherto reserved for facilities and tasks port.

Associated with old industrial buildings were demolished port uses. In their place new buildings such as the National Museum of Underwater Archaeology will help to generate a new focus of activity that will revitalize the ledge at sea and the city. Give rise to a new civic exchange territory for all citizens, in that border area and spot where the city ends and the world begins.

The project’s architect Guillermo Vázquez Consuegra for the National Museum of Underwater Archaeology was awarded the first prize in the National Project and Work and has been exhibited at the MOMA in New York.

The National Museum of Underwater Archaeology rises in the spring of Alfonso XII, in the port of Cartagena.

The spring of Alfonso XII, tension and upright, built in 1872 in front of the walls of Carlos III, on land reclaimed from the sea, is the physical edge of a city characterized by its impressive and beautiful geography.

The port landscape is characterized by constant mobility. The comings and goings of the big freighters or naval vessels, container pile, or the bustle of the crane continued to paint a landscape in transit, changing, never finished.

The proposed architecture for the Museum does not draw or in the forms of vessels, as suggested by the modern tradition, nor in the urban architecture of the city, but responds to specific local conditions. But places beyond their own physical territoriality and the building evokes root in place at the same time, the world elsewhere. This building is making the argument of the underground project.

Being a National Museum of the proposed building program is twofold. The choice of design to construct two buildings on the smooth platform dock Alfonso XII may well respond to the above program. The limitation on the maximum floor area on the slope of the plot, would must be built under the height of the spring in order to complete the requested surface application, but will be other considerations that ultimately lead us to raise the idea of building excavated.

This part performs the exhibition and dissemination of underwater heritage concerning all traces of human existence having a cultural, historical or archaeological value which have been under water.

We believe, therefore, appropriate for the museum visitor in penetrating the interior of the earth, referring to the world underwater and underground, source of the underwater heritage. Secondly, this is a landfill. The platform is the spring of Alfonso XII takes place following the grounding of the space in front of sea walls of the city of Cartagena. It is therefore an area where once stood the sea. The materials, exposure to, and return to their place of origin, now under the heavy layer of stone from the old docks.

The building rises to surface with just two elements: The National Center and the Museum excavated large skylight. Between them, a wide ramp leading down to the visitor inside the museum. The experience of entering is perceived, therefore, as the metaphor of a dip in the sea.

The two volumes, one long, prismatic and opaque are available along the route traced by traffic before the walls and parallel to the cliff of the spring, the other broken, angular, and more transparent by the skylight of the exhibition, jointly adopt a geometry that allows them to form a kind of square on the dock, an entrance hall, a hall of the Museum.

A public space for the outdoor exhibit, where you may perceive some of the elements outlined in the interior of the part of the skylight.

Level buried in the functional relationships shared by the two buildings

The position of the building of Underwater Archaeological Research Center, alongside the new road traffic, which secretes the city of new colonized territories, will allow the citizen to preserve this space to host the museum.

This is organized on three levels, one of them buried as the Museum and in which they share functional relationships such as the lobby, the shop, wardrobe or toilets, and the other two levels above ground, one at a height of 0.00 and the other +3.50 forming the prism that runs 137 meters with a width of 10 meters.

On the south façade of the Research Center a horizontal slit tear the building allowing the entry of light and ventilation to the underground areas.

The building has adequate facilities for the preservation of documentary records, photographic and planimetric.

Developed on land, a piece of the museum for temporary exhibitions, with 500 m2, extends to the edge of the pier, to manage its relationship with the sea through a large window, light and landscape of sea, thus reason for its location at the edge of the Mediterranean.

The skylight, broken, random layout, with a height of 8 meters is inserted into the sea stressing its angular geometry of the cliff straight trace of the pier. Through his glasses get natural light inside the museum space in its lowest -6.00 meters. At the eastern end is located two intermediate levels, the lower would hold another exhibition space and the second is occupied by the cafeteria.

The Museum has an outstanding area for the Department of Broadcasting, with classrooms equipped to develop workshops and activities. In this line of necessary training and popularization of science, the Museum also has an auditorium equipped with the latest technological advances that make it a multipurpose space for all kinds of acts.

Through its capacity building excavated, the volume built on the surface elevation is only half what is permitted by local regulations, so it is minimized on the dock construction, thus yielding public space for the use and enjoyment of citizens. This new urban space, the result of the manner in which these two pieces are placed in the plot, is a public square and at the same time open the new museum lobby. It is a city and at the same time architecture. An architecture that puts its emphasis on the urban dimension, distancing itself from its status to become a landscape view.

With special views over the bay of Cartagena the space devoted to recreation facilities include a café, restaurant, lounges where you can hold conferences or theatrical performances as they have all the necessary technological resources, lecture halls, shop and a library specialist.

In the construction we have used a variety of materials, including stained concrete in the elevations, Chinese basalt paving, steel and glass. All these materials, as well as the metal strips surrounding the skylight, offering a modern and dynamic image of the building. The roofs of the two volumes have been resolved with sheets of zinc. 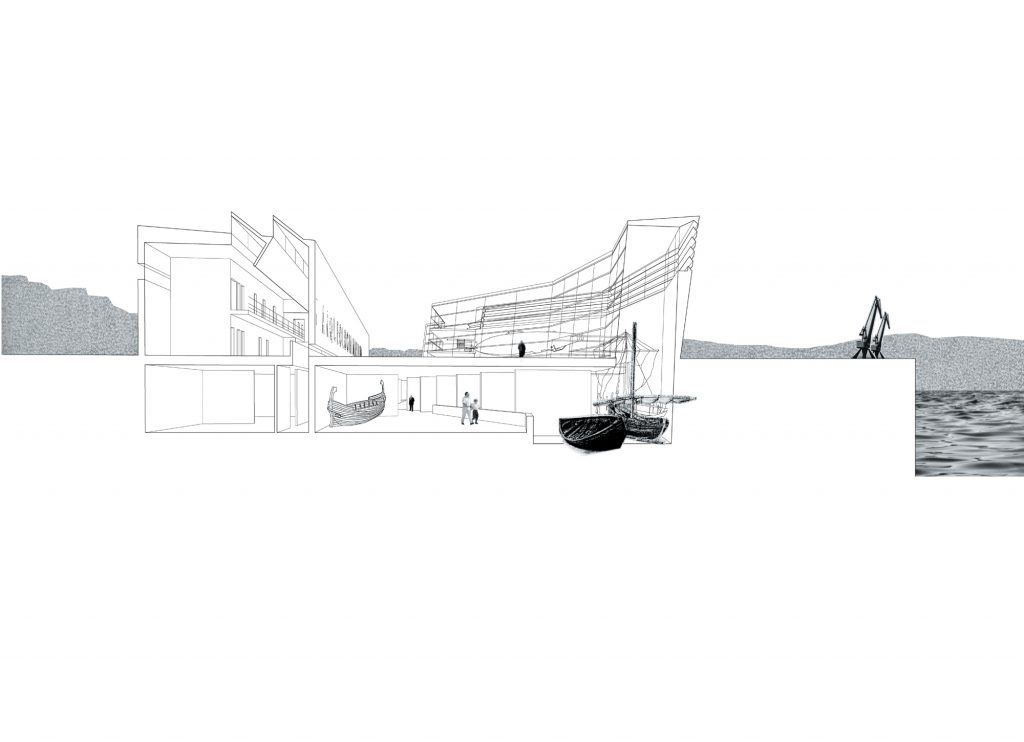 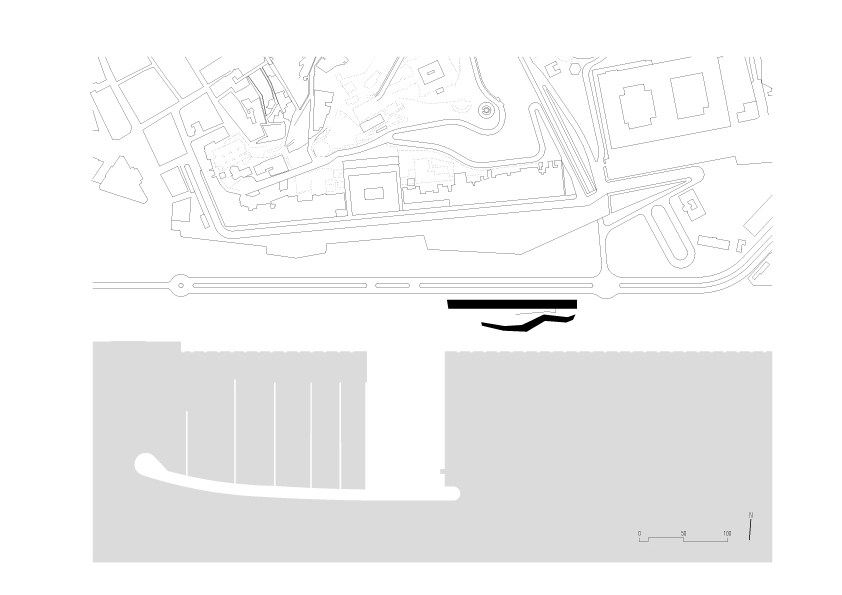 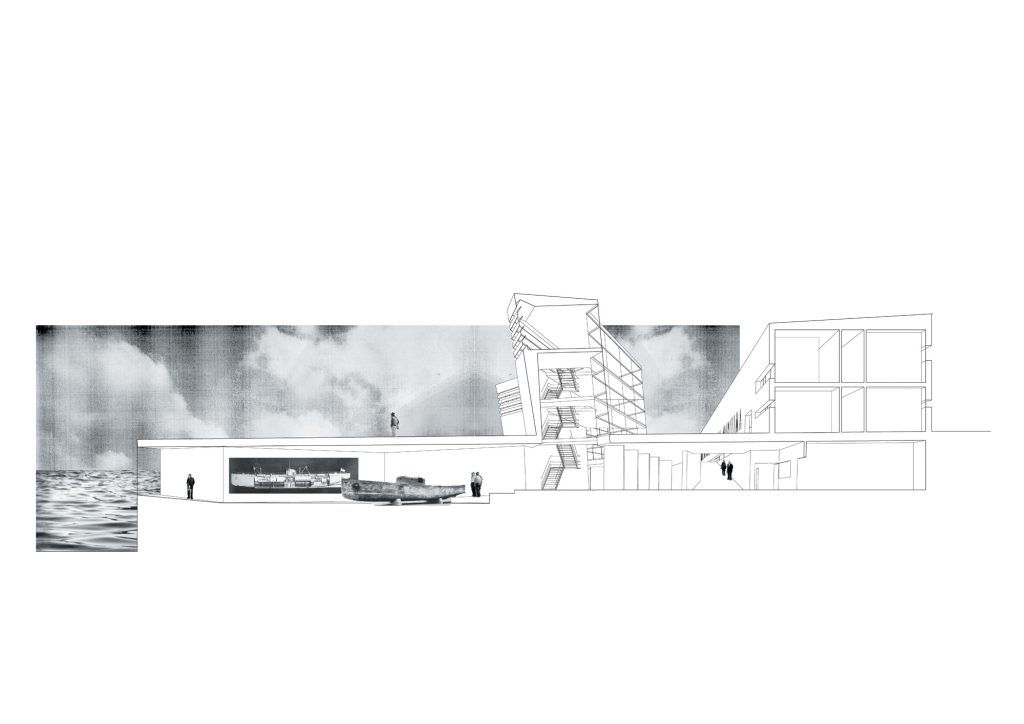 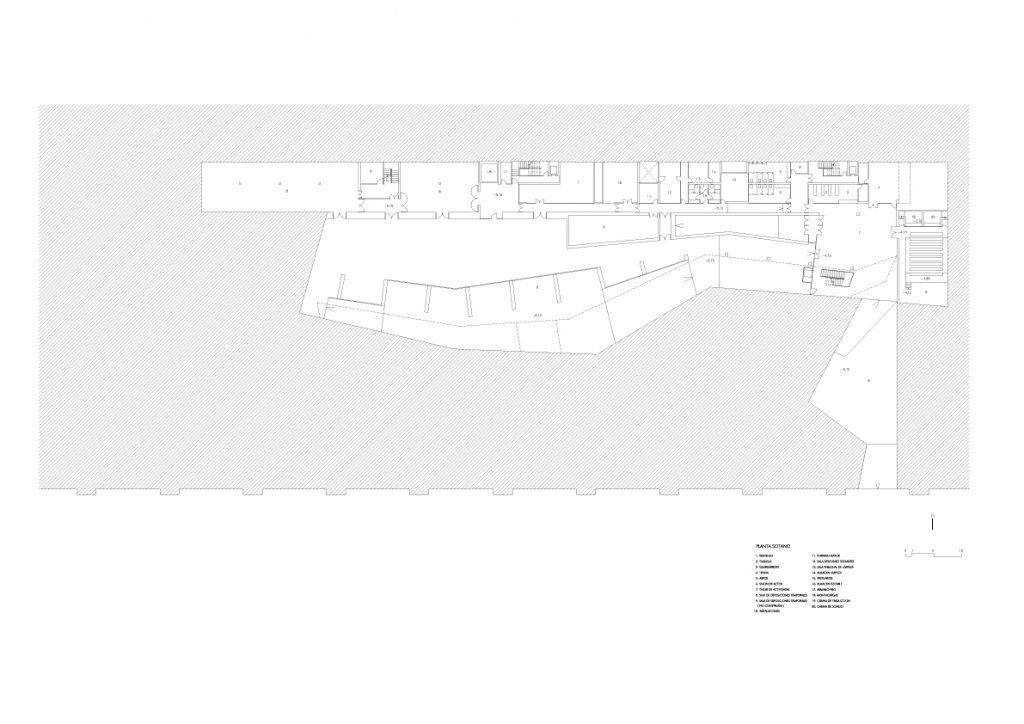 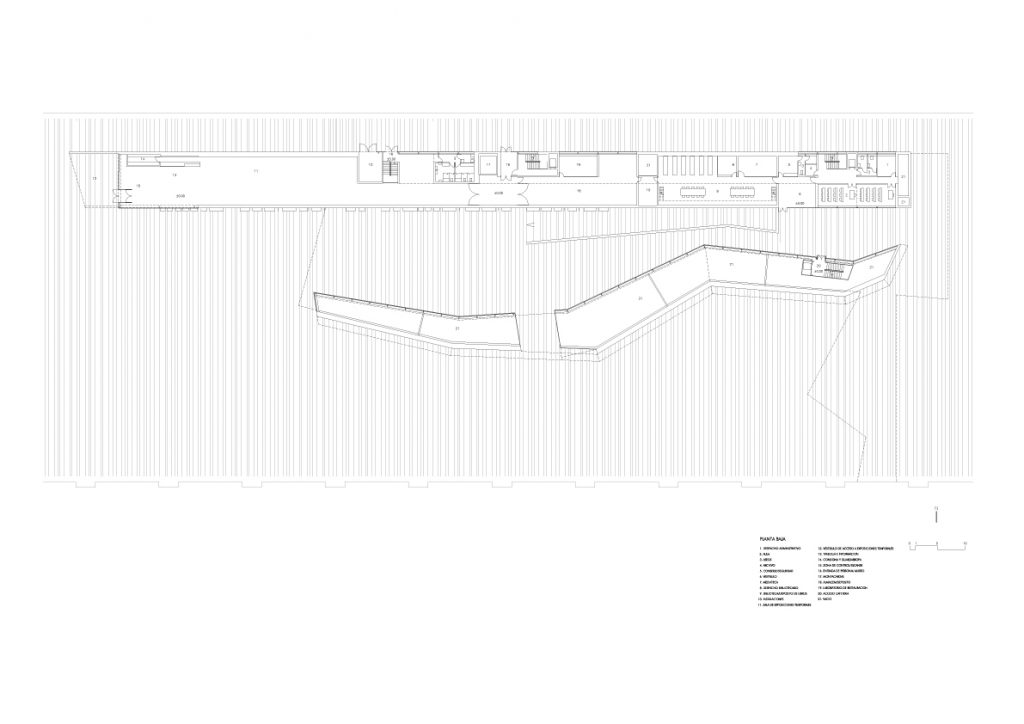 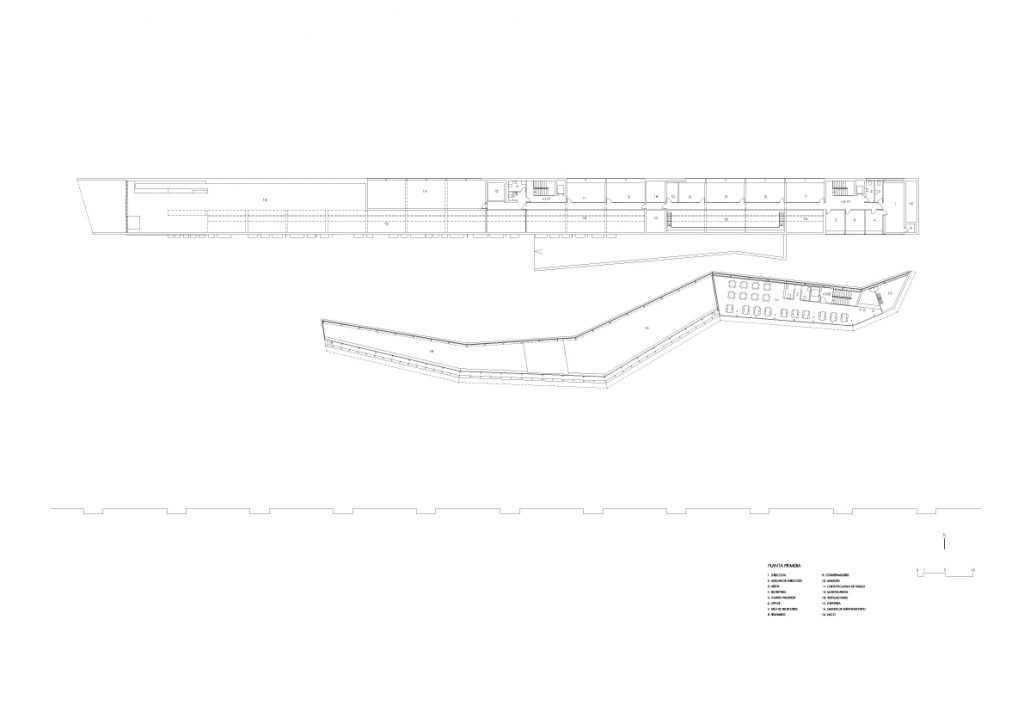 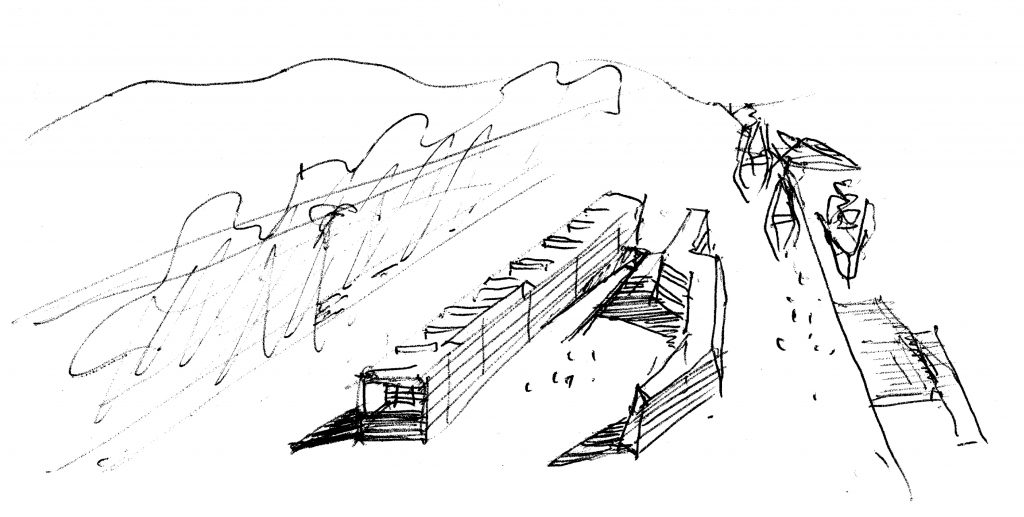 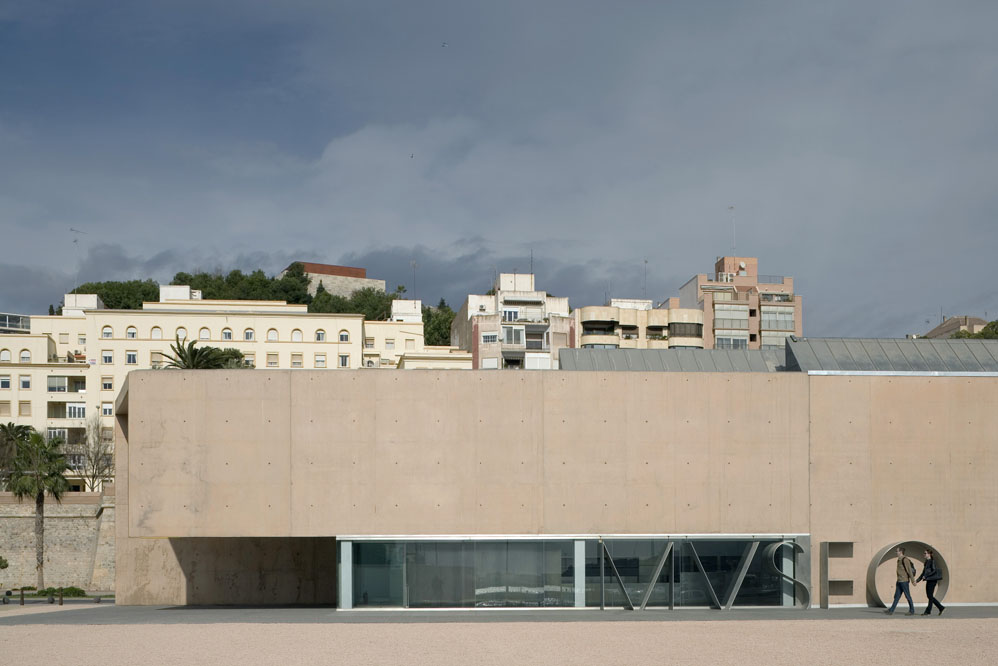 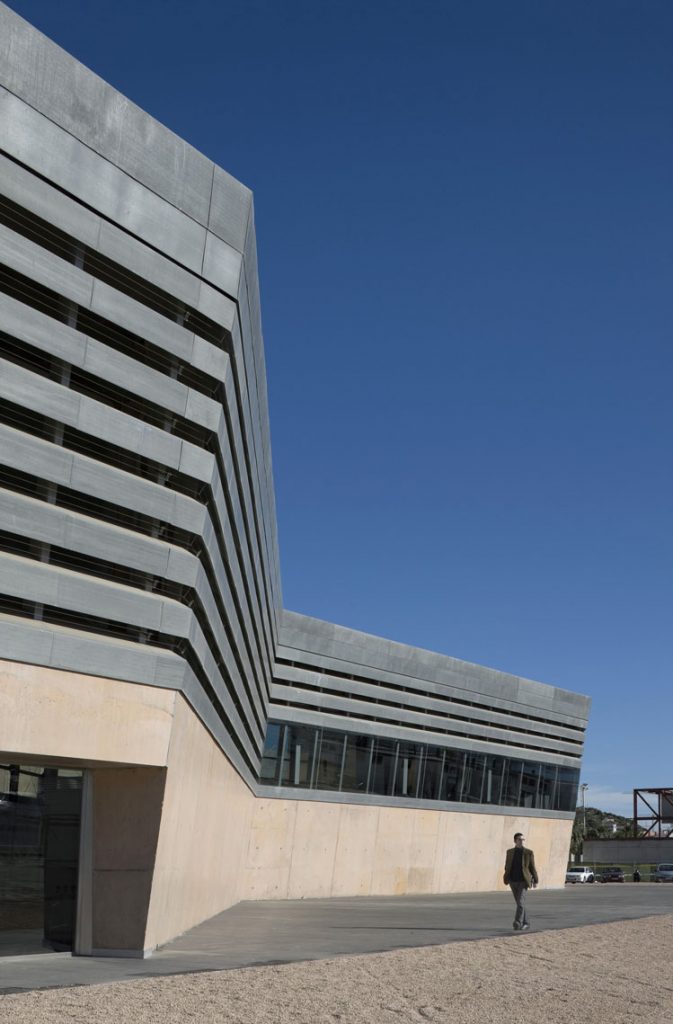 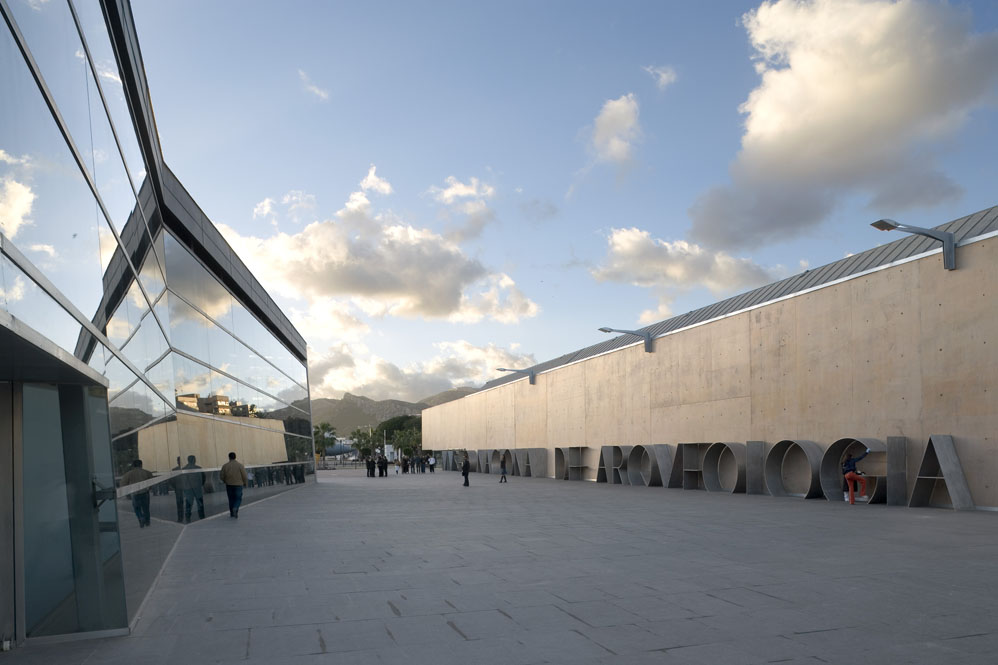 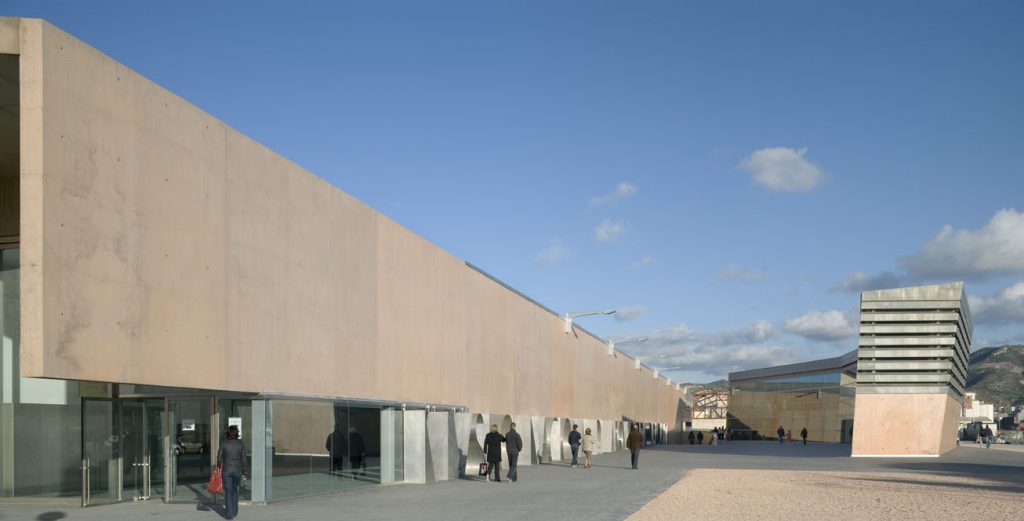 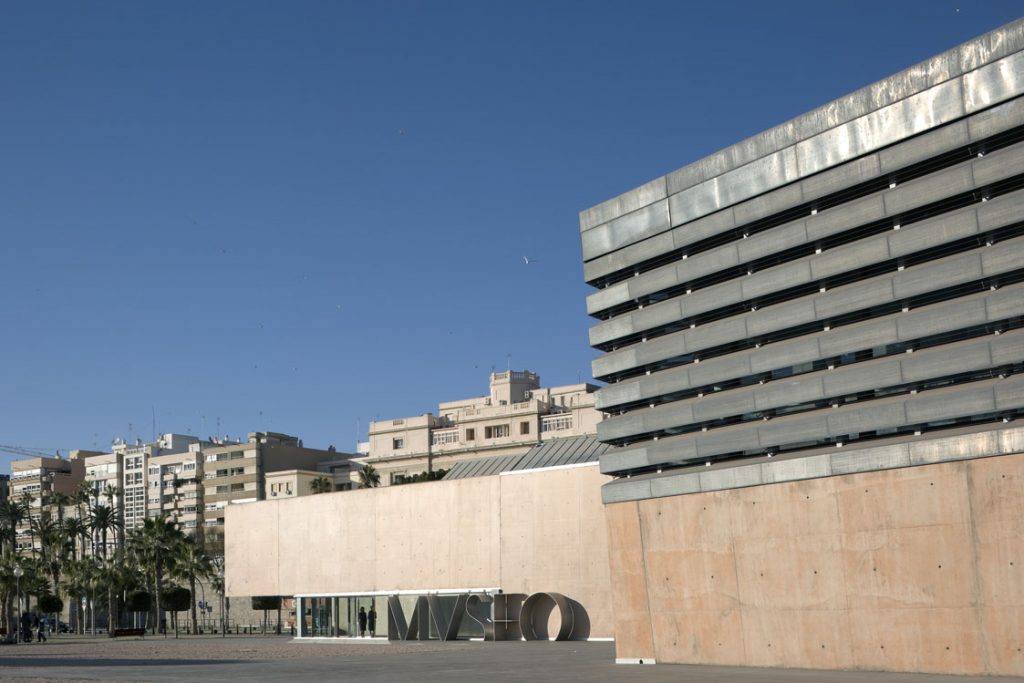 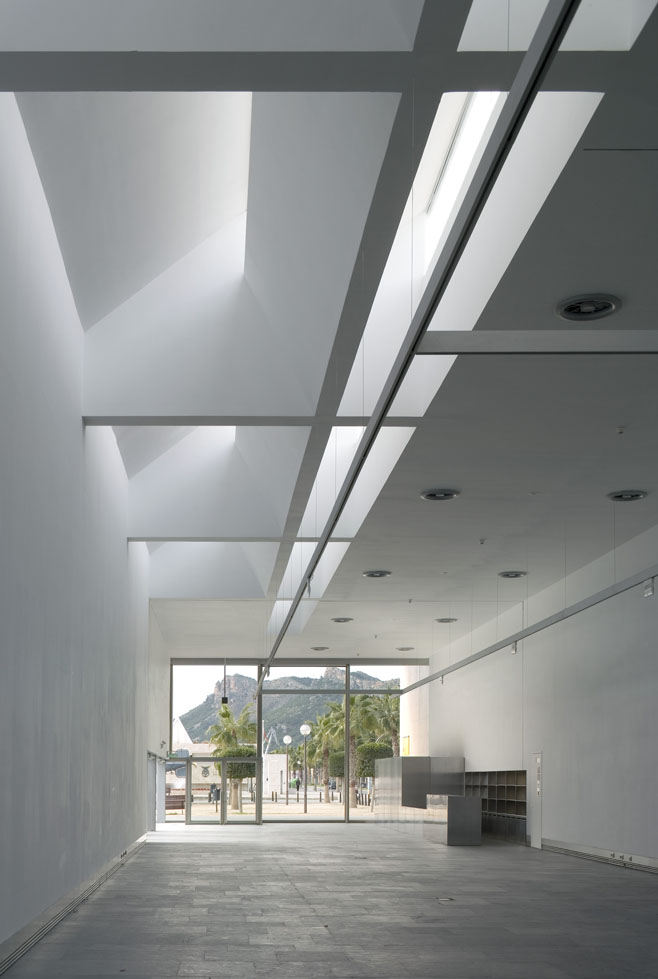 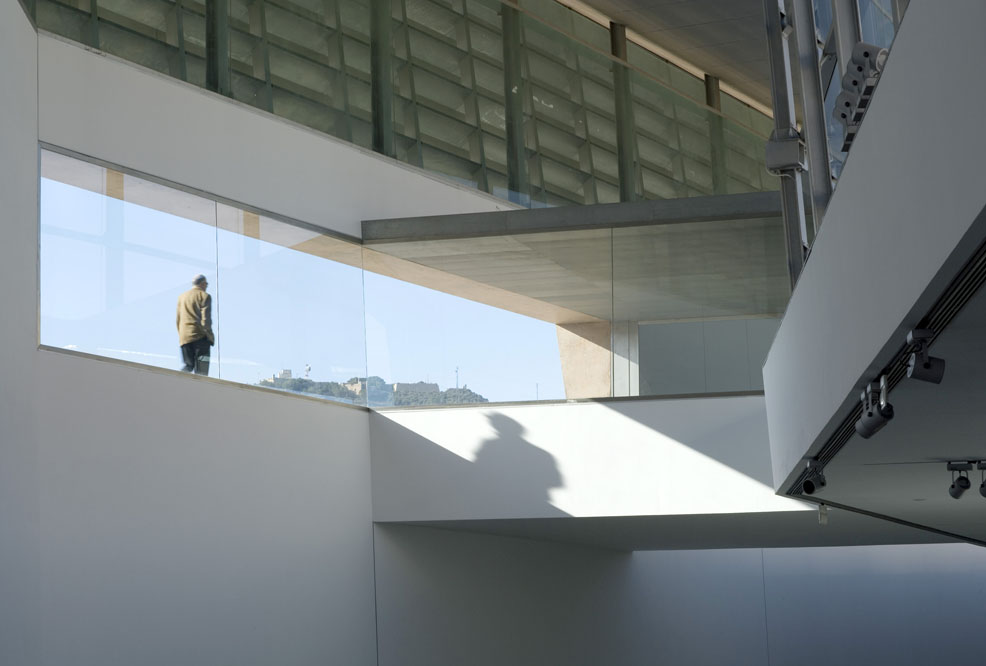 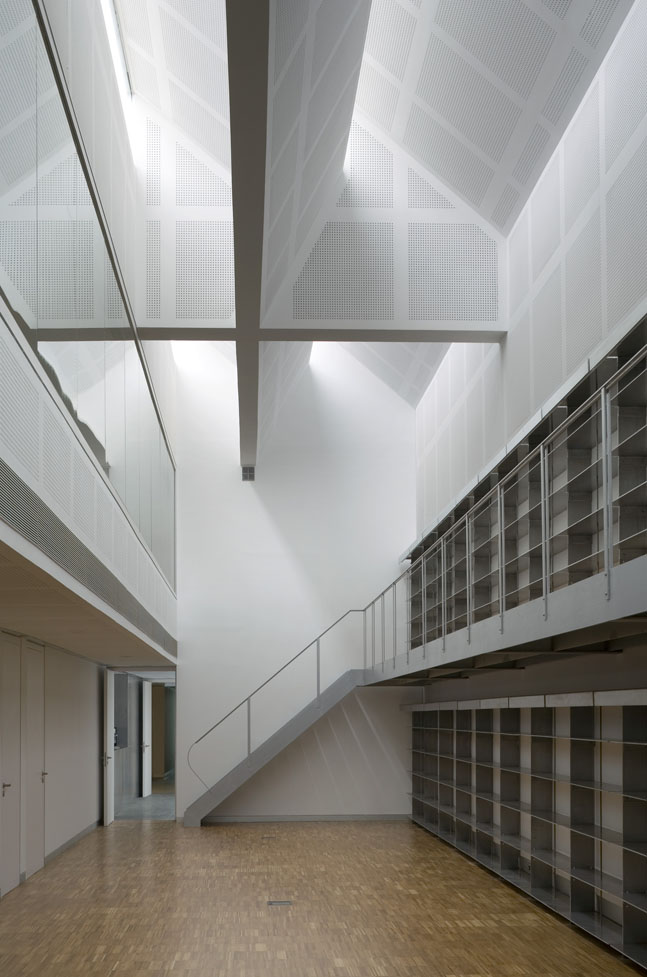 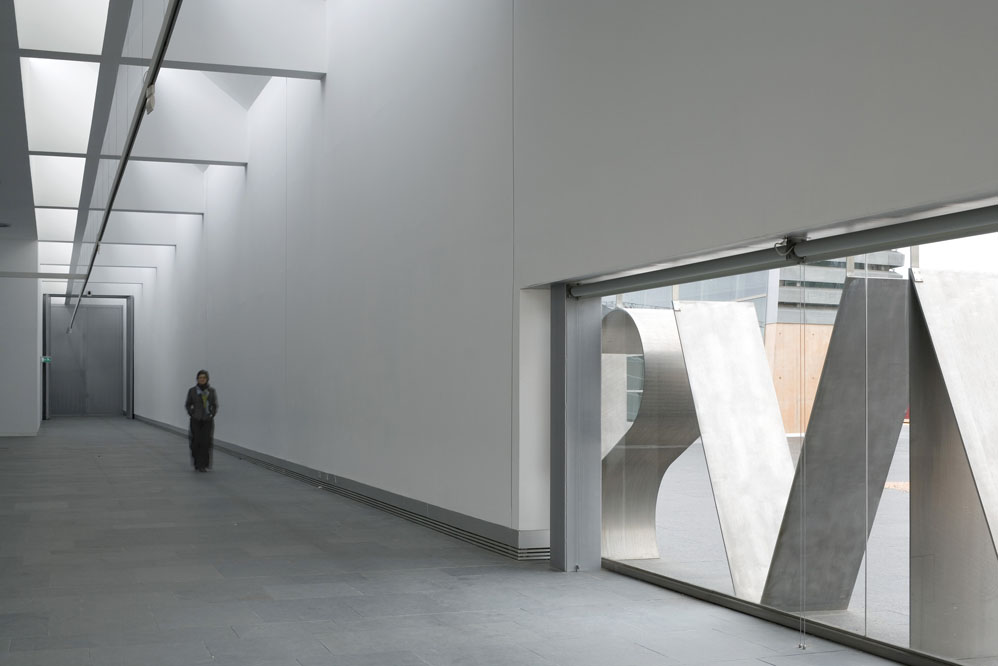 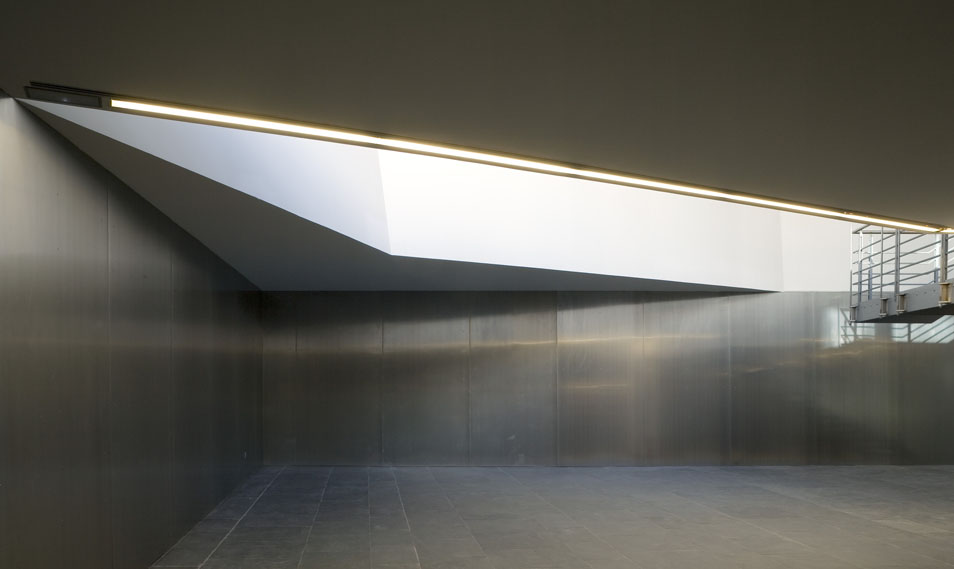 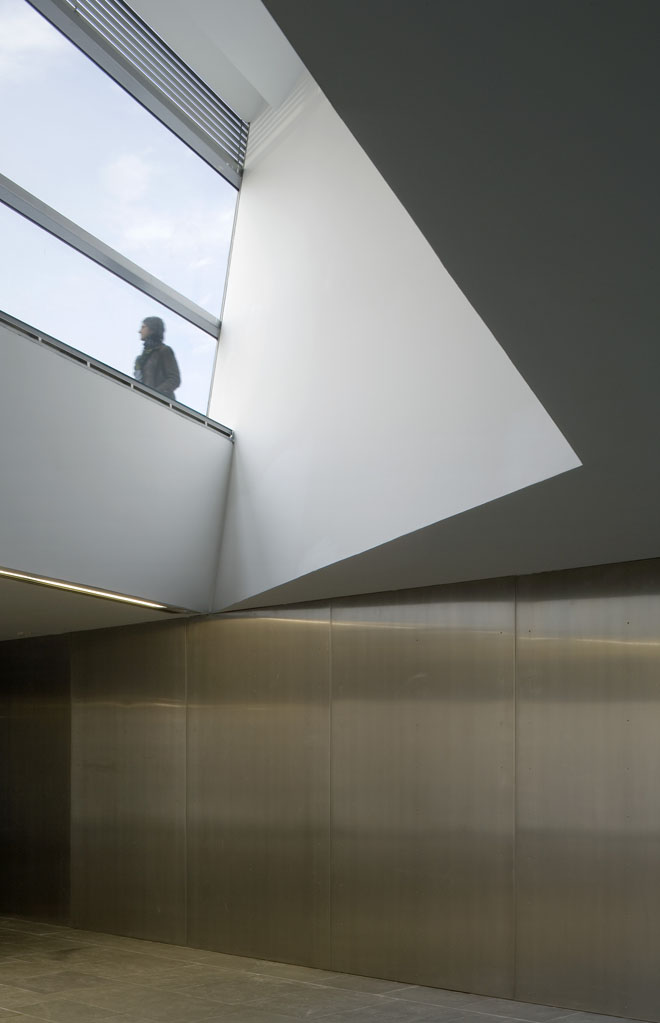 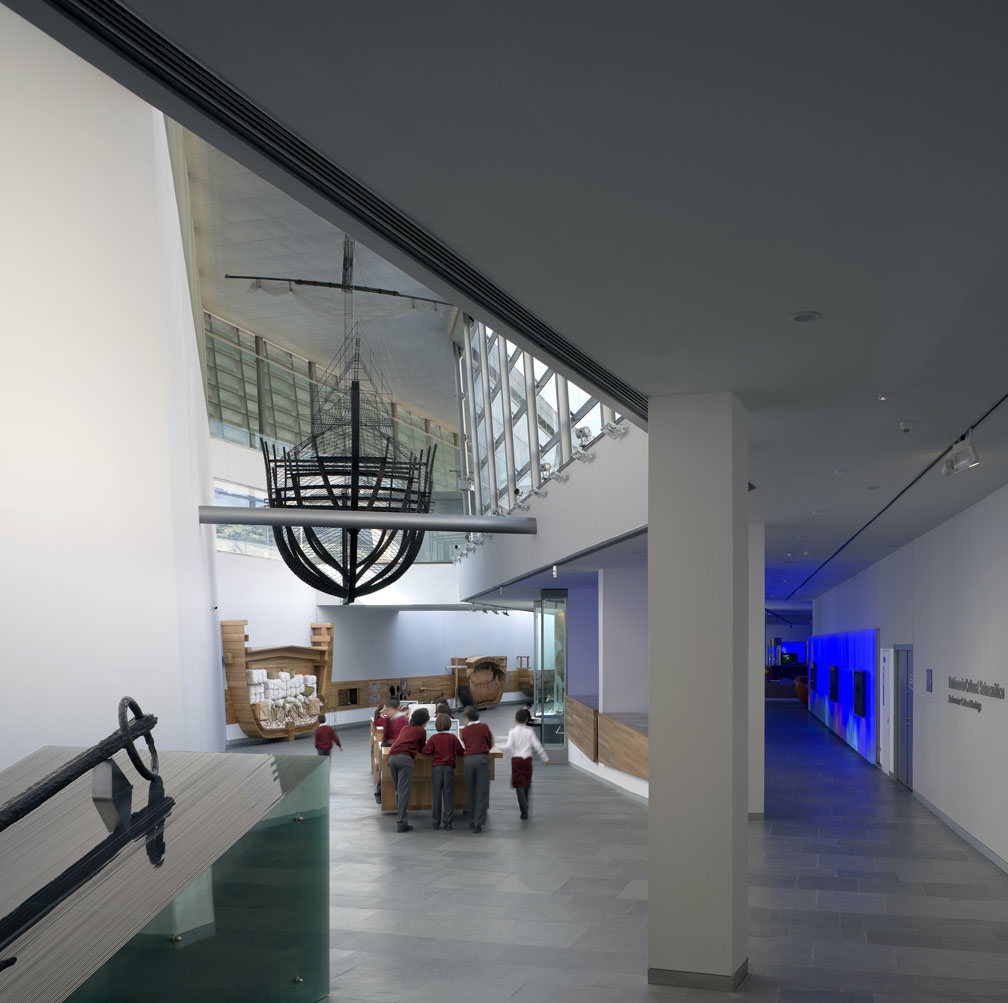 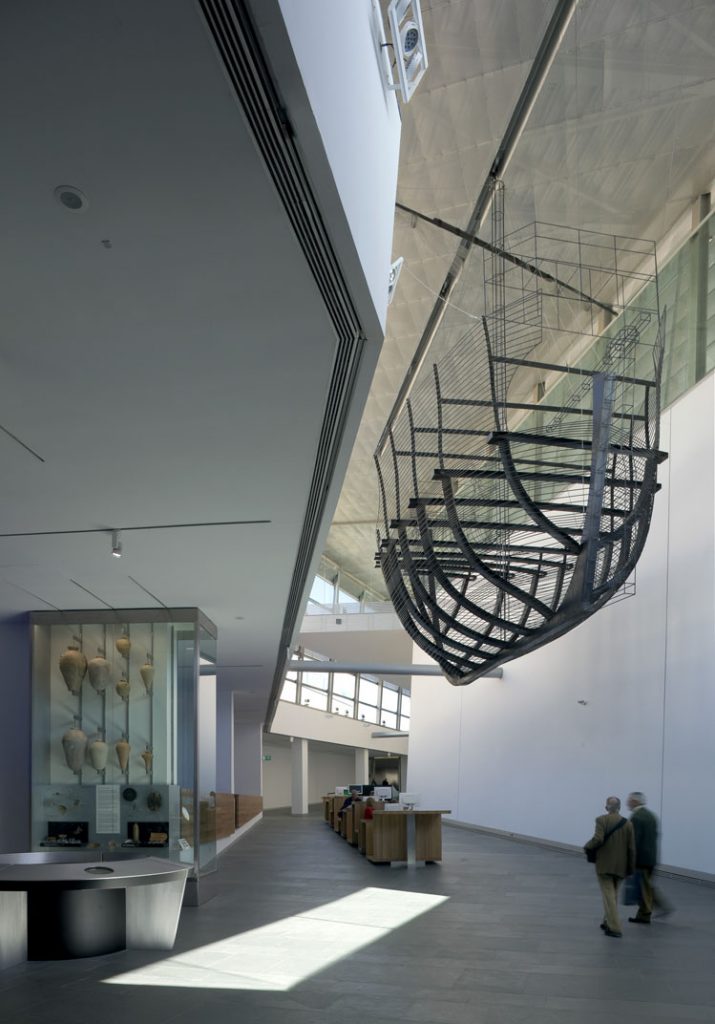 Museum of Underwater Archaeology in Cartagena