Museum of Contemporary Art in Niteroi

The MAC-Niterói project reveals the daring of an experienced artist, responsible for a production that presents a very personal reading of the precepts of rationalist architecture lecorbusiana matrix.

In the 80s, the democratic regime was recovered in Brazil and Oscar Niemeyer returned. He found a different country than it was when he was summoned to design Brasilia, a country whose population is spread in the peripheries of cities.

In the works of this period Niemeyer continues to work with types already explored, winding slabs, domes, arches and platforms, in short, the vocabulary of curved universe.

Located at the top of Mirante da Boa Viagem (Boa Viagem viewpoint) on Avenida Almirante Benjamin Sodré of the city of Niteroi, enjoying a splendid view of Sugar Loaf and Corcovado, as the city of Niteroi is opposite Guanabara Bay in Rio de Janeiro, Brazil, accessed via an impressive bridge or ferry.

The architect Oscar Niemeyer summarizes his project for the Museum of Contemporary Art in Niteroi:

“The field was narrow, surrounded by the sea and the solution came naturally, with the inevitable starting point the central support. From him, architecture occurred spontaneously as a flower. The sea view was beautiful and had to take it. I failed the building and beneath it stretched the picture even more rich. I defined then the profile of the museum. A line created from the ground and continuously grows and spreads, sensual, even coverage. The shape of the building, which always imagined circular, was fixed and I stopped inside passionate. Around the museum created a gallery open to the sea, repeated on the second floor, a mezzanine bent over the large exhibition hall. ”

Also in the words of its creator, the museum emerges like a flower in the rock that holds them.

Created from a revolutionary figure of double curvature, the Museum stands on the cliff as a symbolic lighthouse built overlooking the bay.

The combination of the elements that surround it, an open square of 2500 square meters, a reflecting pool at its base with 817 square meters and 60 meters deep, thereby giving the structure an appearance of lightness.

The modernist structure with circular lines and saucer-shaped, has sometimes been likened to a UFO. The structure rests on a water source from which emerge the flying saucer appears white, pretending to be suspended in the air.

The project consists of a semi-underground facility surrounded by water body and an upper body consists of three levels.

External winding ramp that leads visitors through its 98-meter freestyle in space, serves as liaison to the first two floors of the museum, connecting the public space with the core that contains the permanent exhibition hall.

In addition to the store where works are saved, there is a bar, a restaurant and an auditorium with capacity for 60 people.

In the restaurant a thin window is opened horizontally along the front offering views over the bay.

Also located in this underground power plant with 800 KVA, water pumps and two water tanks of 6000 cubic meters each.

In addition to the reception, work room, a large lobby and administrative offices, you have access to the large hexagonal room double height, surrounded by a promenade circular opening to views of the bay continuously through a window surrounding the entire volume. The showroom is 393.13 square meters.

This is among the first and second level, around the entire interior of the museum is divided into smaller rooms, also for exhibitions. In total 398.02 meters square.

On this floor there are five galleries, with a total of 697.40 meters square exposure.

Niemeyer designed a radial structure sixteen feet high, with a deck of fifty meters in diameter and almost 2000 square meters which is based on a single central support cylinder 9 feet in diameter anchored in a giant shoe two meters. This complex structure that appears to float in the air was designed to withstand a weight equivalent to 400 kg / m² and winds up to 200 km / hour.

The large central hall with 462m2, completely free of columns and contoured at the top by a wide space for smaller samples, named as mezzanine, has promoted the implementation of large tables and radial girders under the roof of the Museum. These beams are supported by six pillars of 50 cm in diameter.

Pictures of beams and columns are thus a kind of table that is in turn supported on the structure of the first floor. The weight of the superstructure, transmitted by the columns of the above “table” on the first floor is supported by a set of radial beams prestressed concrete made also on the supporting pillar. These beams are projected on balance about 10 meters, creating a circular periphery and protruding on the outside of the museum.

For its construction were removed 5,500 tons of material excavated and consumed 3.2 million meters cubic of concrete, enough to lift a 10-storey building.

The circular roof received a heat treatment and waterproofing.

The beams were built with prestressed concrete.

The construction of pavement of the great ramp concrete has been used red, combined with the white side walls.

The floors of the halls were lined with 3,000 square feet of blue carpet.

The 70 triplex glass plates were manufactured exclusively for the project. Each sheet of 18 mm thick bronze is 4.80 and 1.85 meters wide. Framed by steel bars and with an inclination of 40 degrees to the horizontal plane can sustain a weight equivalent to 20 people.

In the central room is the lighting technique involving the environment together with the lighting from the windows.

The same applies to the upper floor. From inside the frame, formed by the meeting of the plant with the ceiling, hidden indirect light gently illuminates the environment.

Externally, the museum is illuminated by light bulbs 34 aircraft, 1000 watts each and installed on or under water at the base of the building, creating a spatial pitch that emphasizes the lightness of the main structure. Tangential light extends above the top of the roof to the sky.

To ensure the safety of visitors, both day and night, the ramp leading to the museum has its boundary delineated by a light beam

Museum of Contemporary Art in Niteroi 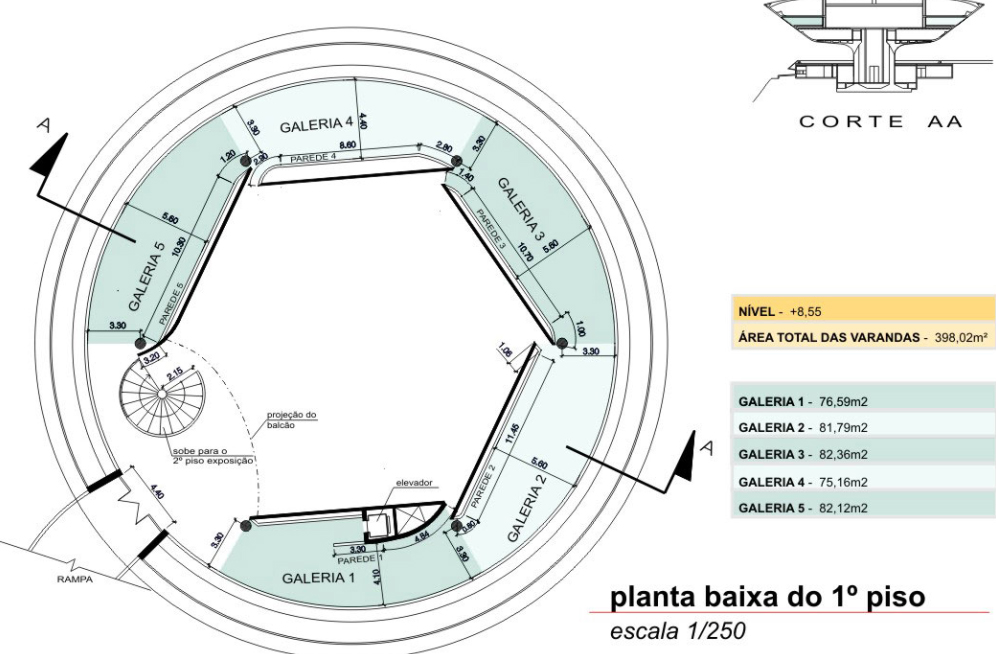 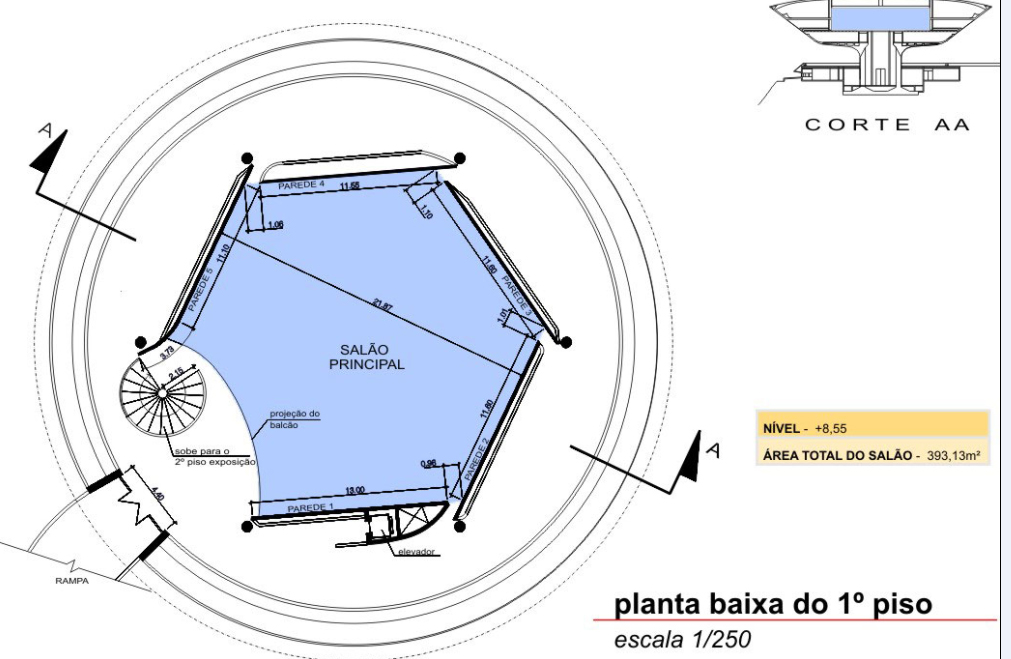 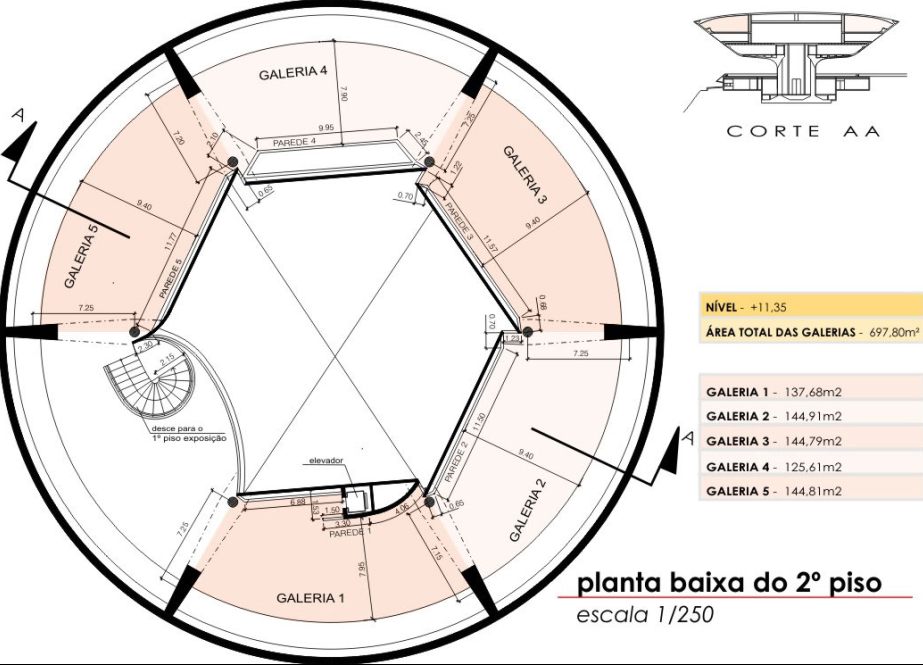 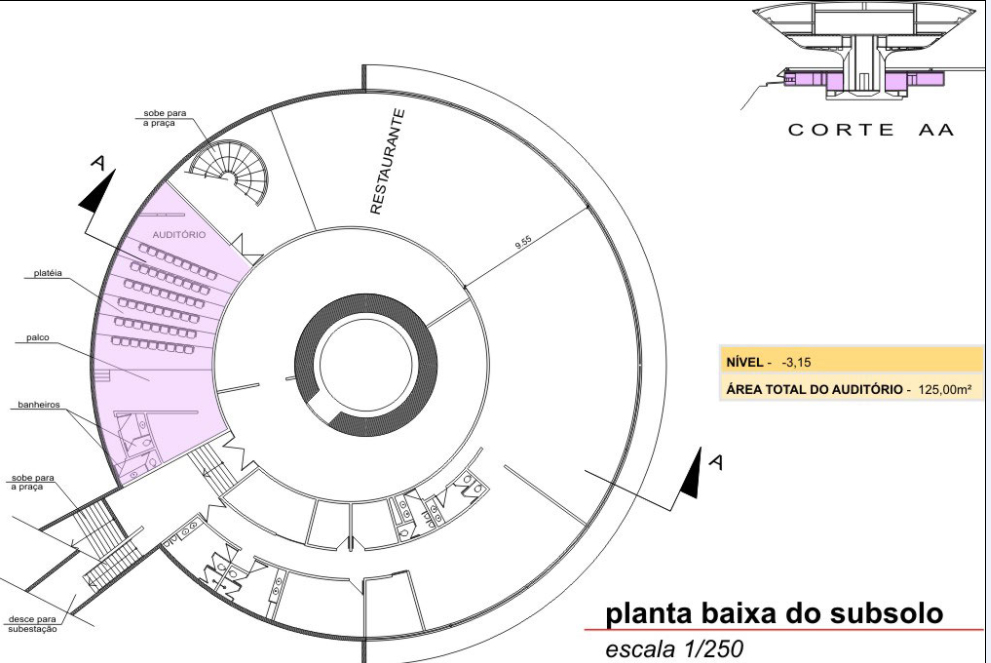 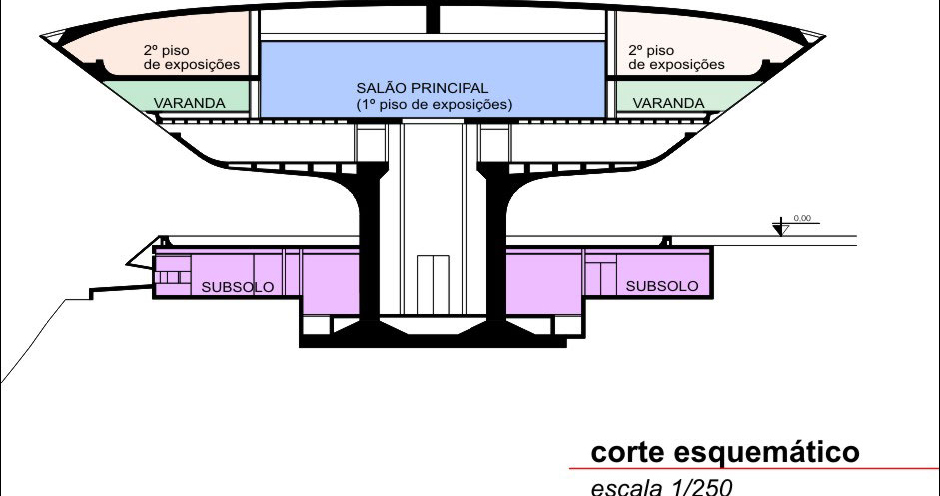 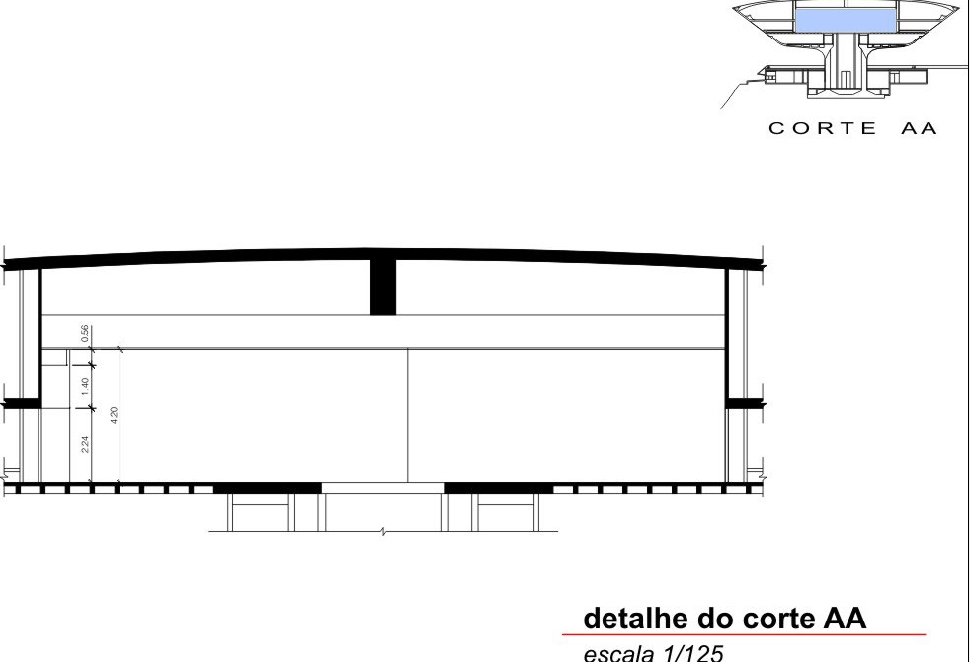 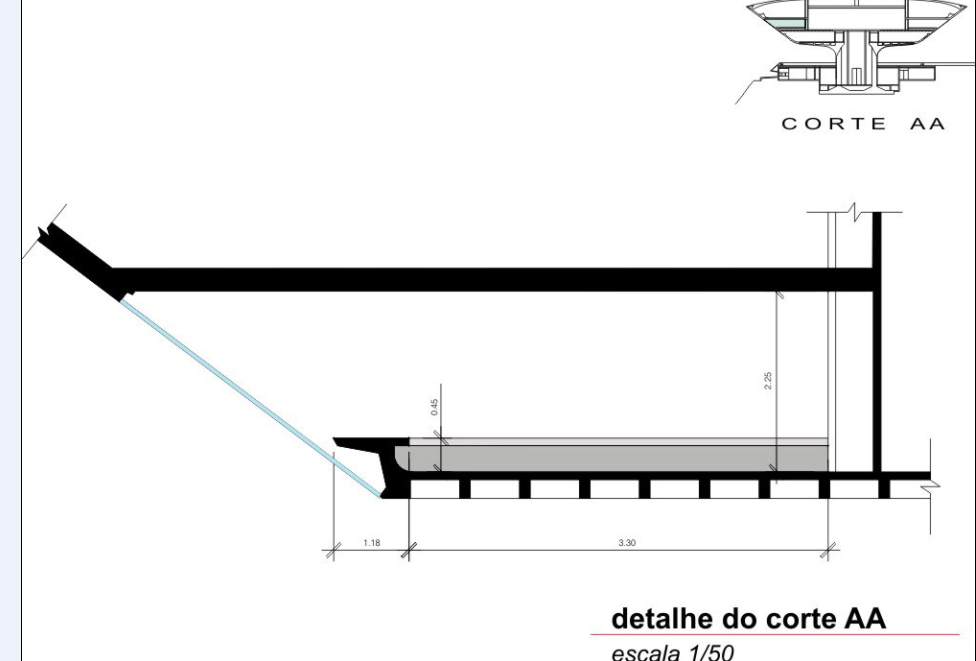 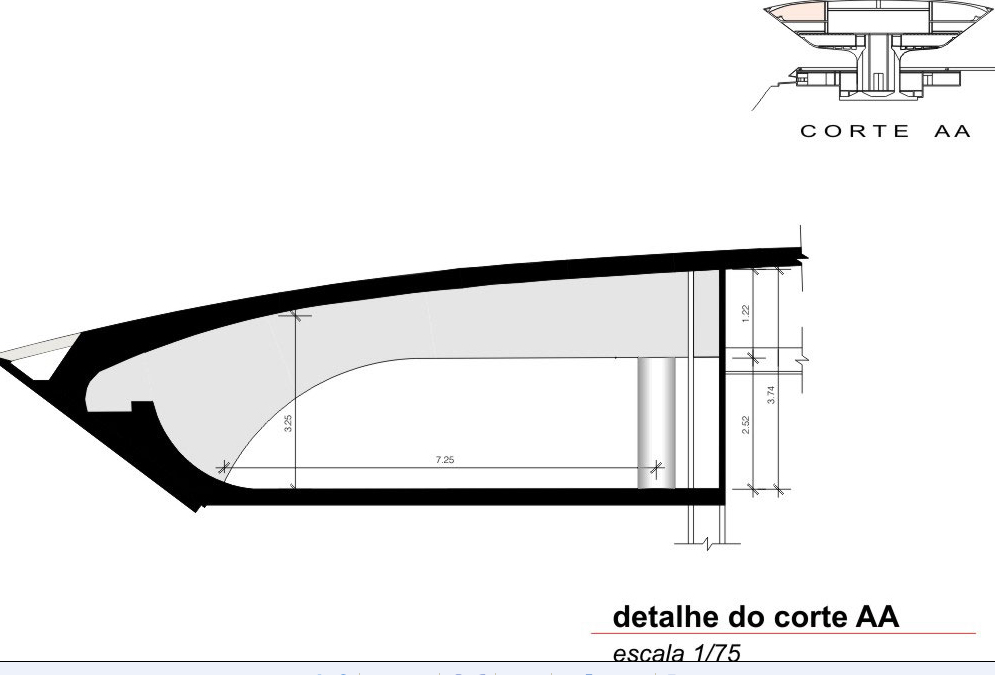 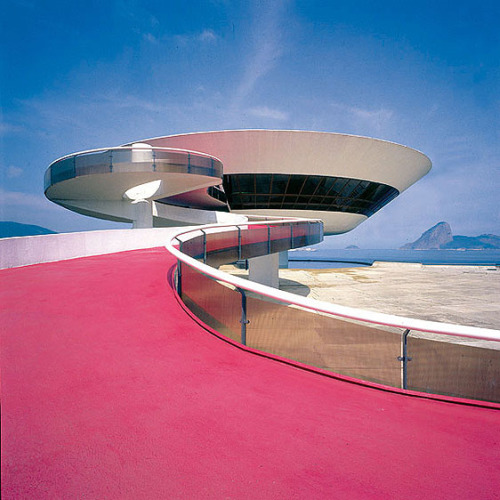 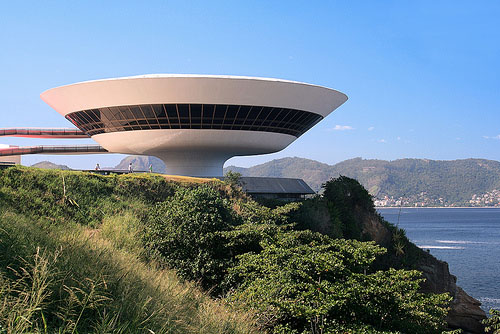 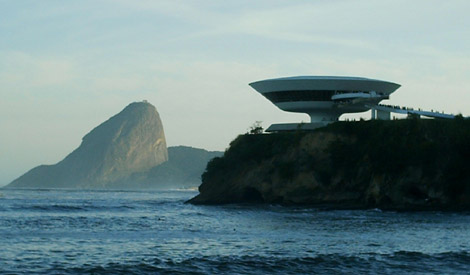 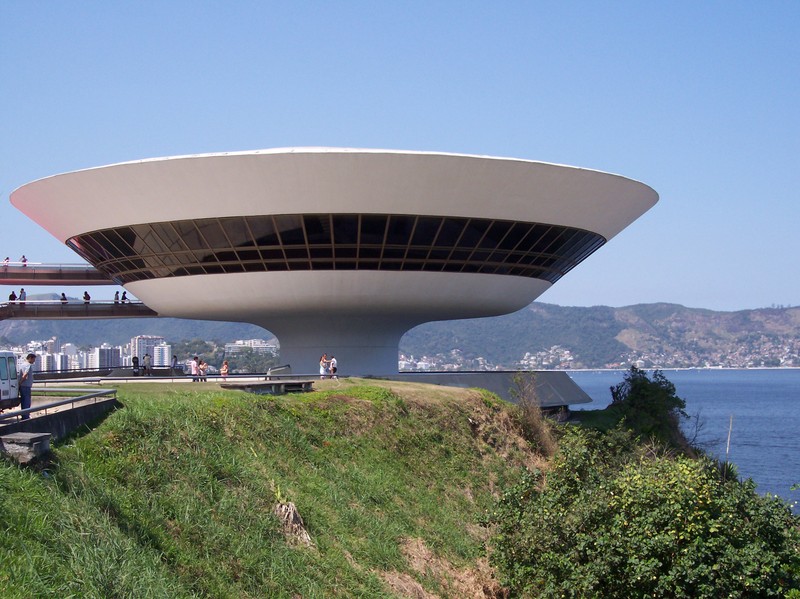 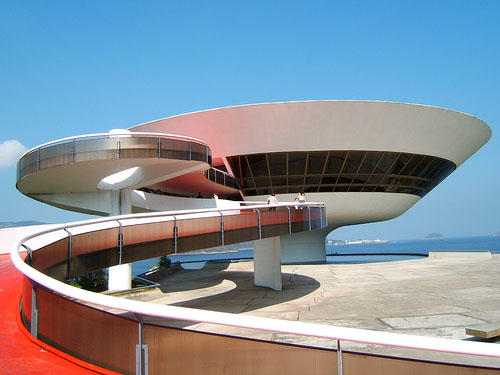 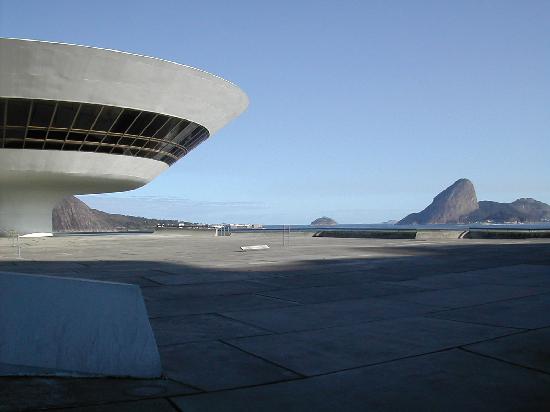 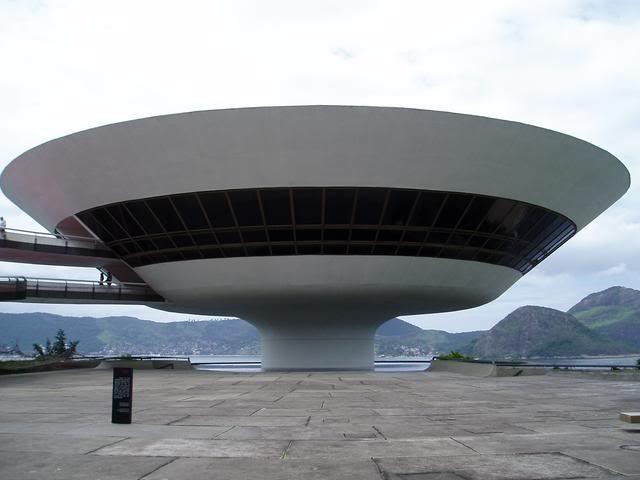 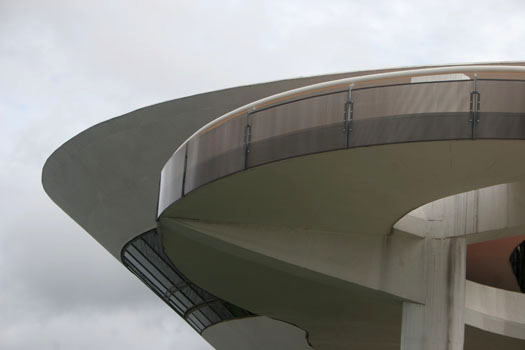 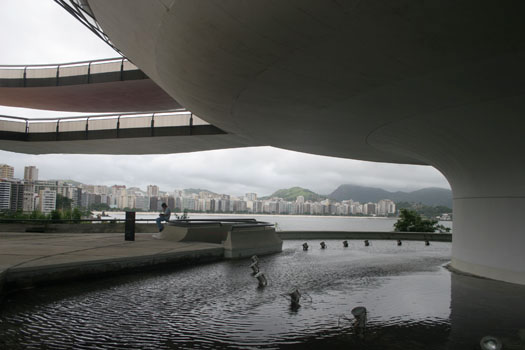 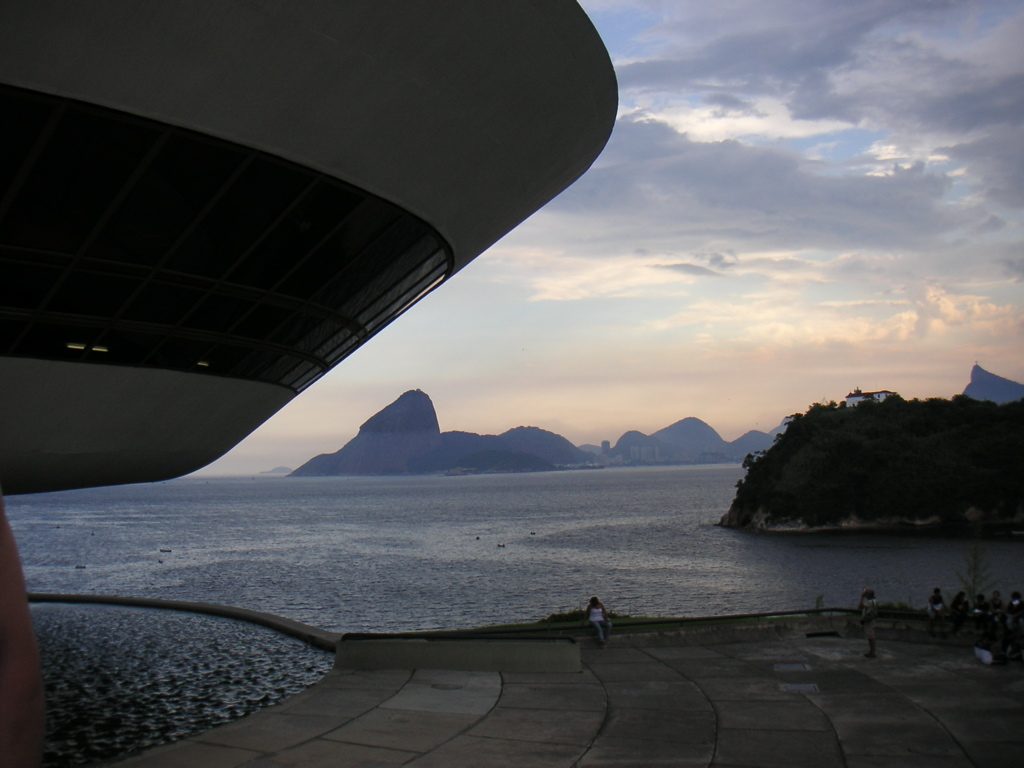 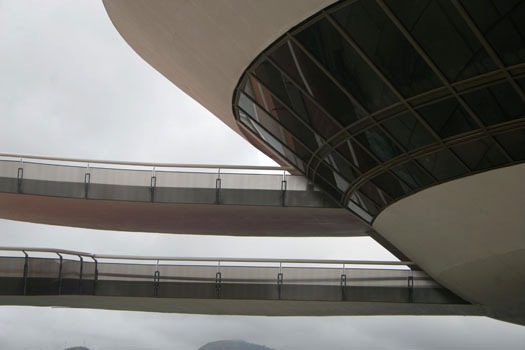 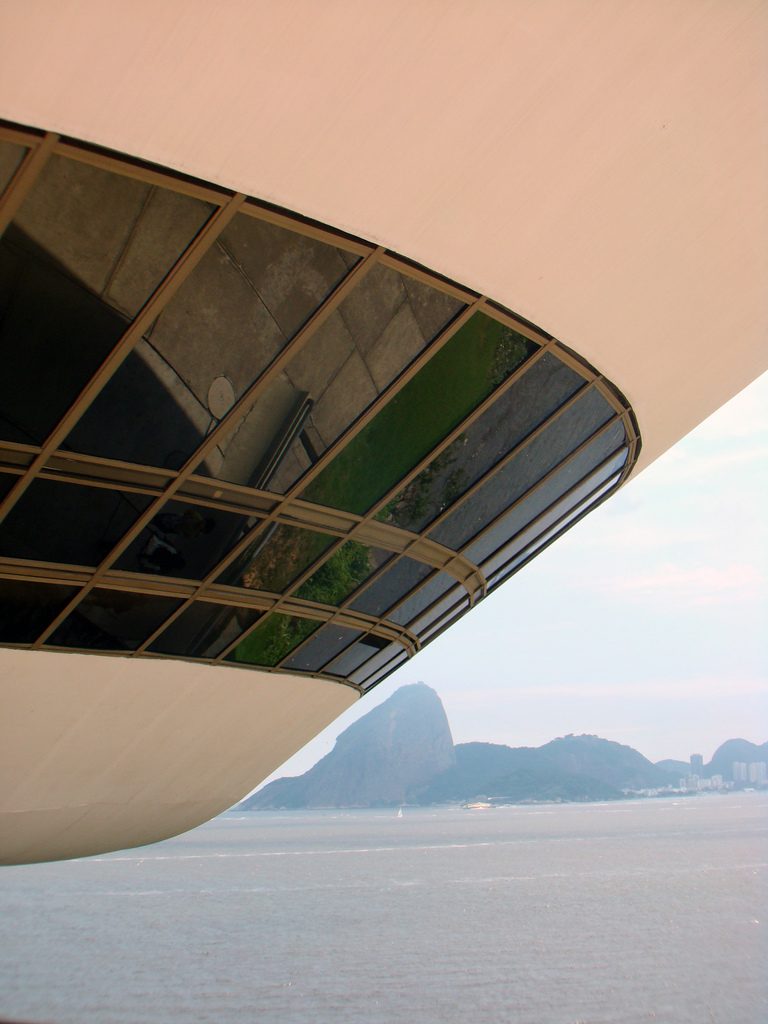 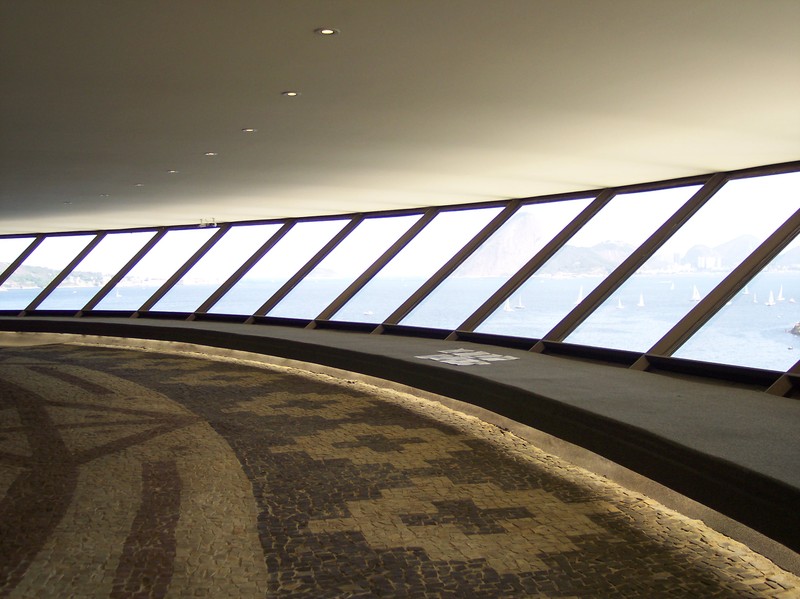 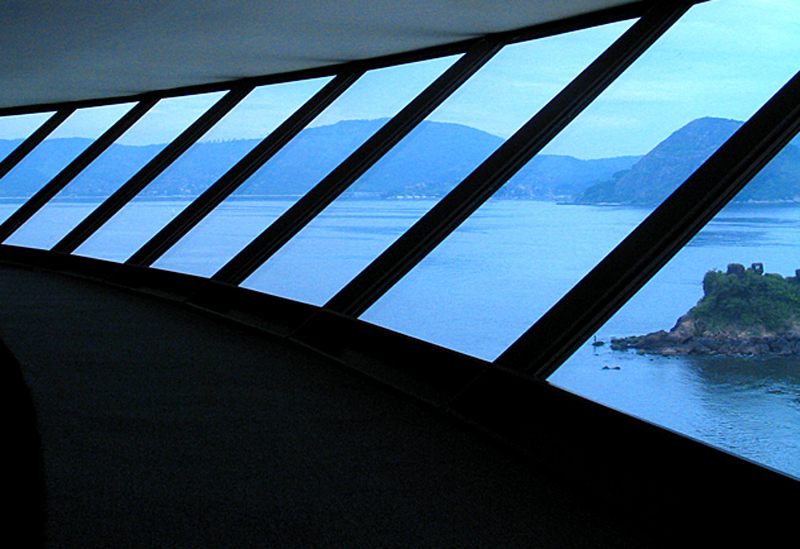 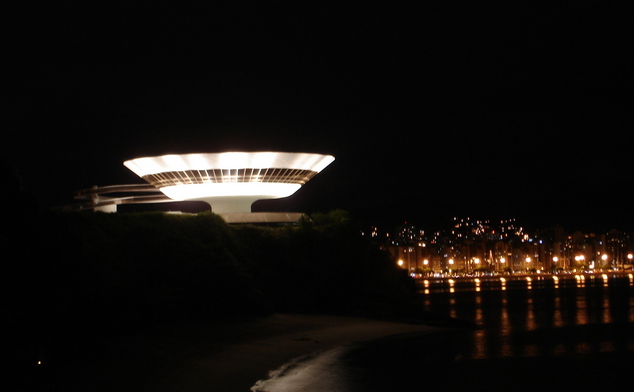 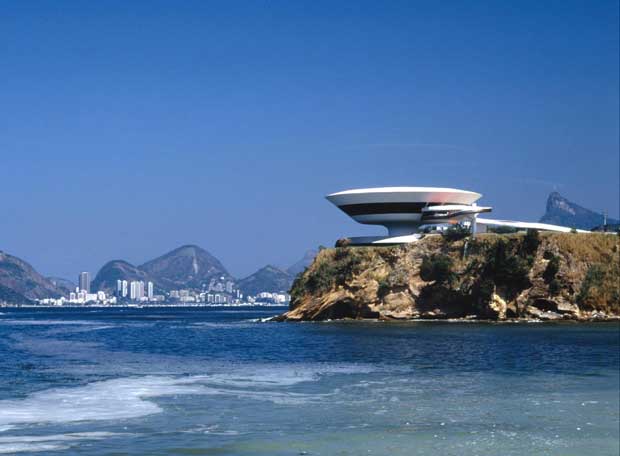 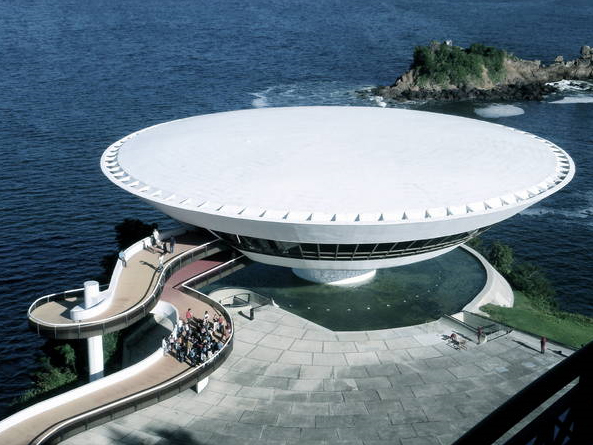