The project marks an archaeological site in the center of France France and commemorates the story of the battle between Julius Caesar and the Gauls in 52 BC. Although all traces of the battle has been deleted, the new museum recreates battlements and earthworks and provides interpretation services for the area.

The plan consists of two separate but related structures:

One building is a museum located in the position of Gaul during the siege to the top of the hill above the town. A second building is an interpretation center located in the Roman position in the fields below.
Strategies give maximum presence to historical events respecting sensitive insertion of the buildings in their natural environment responds to the ambition of the project, while reflecting the imperative of modesty demanded by archaeologists. Be both visible and invisible is the paradox and the challenge of the project.

The Park Interpretation Centre Alesia, was built on a plot of 91 acres in the Burgundy French, 1 route des Trois Ormeaux, near the village of Alise-Sainte-Reine, commune located in the center of the department of Côte-d’Or, 50 km from Dijon and about 90 minutes southeast of Paris train. 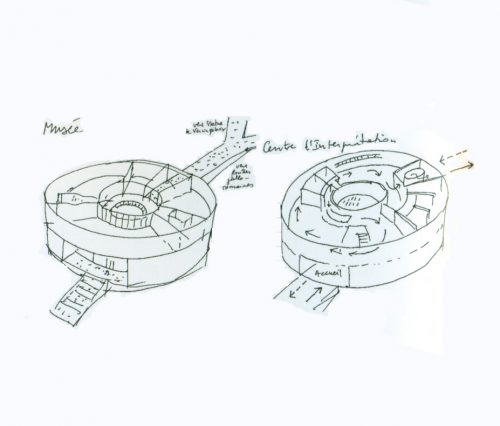 The bill creates two buildings with a simple cylindrical shape. The housings are adapted to the surrounding materials, minimizing the form. By linking structures, pledging to integrate with the landscape and buildings using a simple round type, the buildings get closer to the battle site, fostering a sense of respect and admiration through a silent and formal presence.

The Interpretive Center was born from an idea by architect Bernard Tschumi. A resounding cylinder whose geometry and shape symbolizing the siege of the Romans to the Gauls in the legendary battle of Alesia. His ring refers to the palisades and ditches with Julius Caesar’s troops besieged Vercingetorix galas.

Winner of a competition held in 2002, Tschumi proposes two cylindrical buildings, the first is completed houses the Centre and its construction was completed in 2012.

The second by building sheltering an Archaeological Museum and 6.500m2 available on three floors, is expected to be completed in 2016. Between the two buildings is a distance of approximately 1km, as the museum is built on the hills of Mont Auxoix.
The architect explains “… the two buildings with its circular shape, enter into dialogue…”, like concentric circles arranged between the battlefield and the “oppidum” or defended settlement. 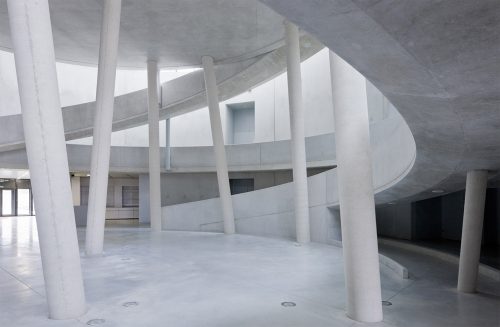 Bernard Tschumi has created a counseling center circular concrete wrapped in a wooden lattice that evokes the Roman fortifications.

The entrance to the building is oriented to the road in the north, but a secondary access can reach reconstructed fortifications and battlements also visible from the building.

Crossing the wooden facade, alternating inclined slats with different spacings and dimensions, is access to a large hall whose rotunda shaped roof, a concrete disk corresponds to the floor of the conference room. This central vacuum is a gray area, almost monolithic pierced by round columns and some of them a little bent. Solid walls separate this space from the space program and any view of the outside grill, interior and exterior as if they were two sides of a coin, never to be experienced at the same time.

The two plants that form the building spread over four floors around the central atrium and are connected by a smooth ramp up stairs, offering 1.200m2 of exhibition space.

The gentle slope, reminds the Guggenheim Museum in New York, leads visitors to the exhibition and conference areas and ends at the roof terrace, where the auditorium, surrounded by oaks and birch. Because natural light it receives from the glazing located on the sides and top of the building, acquired some semblance Piranesian and the final sections of the spiral, with translucent glazing on the floor accentuate the ethereal character of the interior.

The garden terrace, with oak and birch, offers a panoramic view of 360 ° to Mount Auxois and the surrounding hills, where the camps were located in the Roman army. It is the highlight of the tour with mounted wooden palisades, like a battlement. 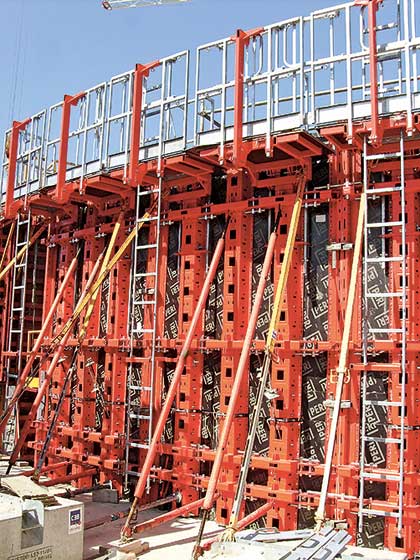 To create the concrete structure wall ties were used in both the walls and the pillars, but the structure of the internal ramp was used to a much more traditional, a wooden form with a careful pouring concrete.

The hard concrete that forms the roof of the hall is supported by pillars, also concrete, some to lead and other inclined.
Due to the cylindrical shape of the building and satisfy the requirements of the walls to make the survey involved two types of circular formwork for walls, Cale and RUNDFLEX VARIO Plus, for the exterior walls and the interior joints to be receive a cover for each rotation, responding to a specific design plan. Both types of formwork allow optimal realization of panels of great height.

The museum will be built with stones, similar in appearance to the buildings of the city but with current technology, and will be partially buried in the hill top to look like an extension of the landscape.

The Interpretation Centre is constructed of wood, as the existing Roman fortifications at the time of the siege, and concrete.
The façade material shaped gate laminated larch evokes the Roman fortifications and comes from Germany. The facade was assembled on site using screws and galvanized steel pins. This lattice wraps the body solid concrete and glass with metal frames, giving some protection and camouflaging, in a sense, the strength of the concrete, perhaps “humanizing” the building.

Inside was used concrete mixed with white sand, using steelforms both the walls and pillars.
The roof of the building is a garden planted with trees and grass, camouflaging the presence of the building when viewed from the top of Mt. It has a system for collecting and filtering rainwater, which together with the use of wooden brise-soleil contribute to energy savings.