The pedestrian bridge designed by artist Vito Acconci, who also dedicated to architectural projects, was inaugurated in 2003 on the river Mur. Known as Mur Island Bridge or Aiola Island Bridge involved the creation of an artificial island accessible on a floating platform on the river, as part of preparations for the appointment of Graz as European Capital of Culture 2003.

The fact that in 1999, Graz was designated by UNESCO as a World Heritage Site for its “harmonious blend of architectural styles and artistic movements from the Middle Ages” represented both a challenge and an opportunity to offer an innovative and contemporary design. The project was created in conjunction with Robert Punkenhofer, resident in the city of Graz and later in charge of its development.

Following the presentation of the project in an exhibition at the Cultural Forum Austria to New York in December 2002, the Mur Island officially opened to the public in January 2003.

The island was originally intended as a temporary project to celebrate the program of the European Capital of Culture in 2003 and to be subsequently sold and relocated to another river or city. However, the island became a landmark popular with local residents and an attraction for visitors to Graz

When the program year of Culture ended in early 2004, the city commissioned a study to assess the feasibility of the location of the island as a permanent structure. Engineers at the University of Technology in the city tested the structure and the same year the city of Graz decided it could be permanent. The projected life Mur Island is approximately 50 years.

Located in a turn of the Mur River in the city of Graz, Austria, just 80km from Salzburg, this magnificent bridge connecting the ends of the city.

The floating platform was placed between the historic city center and Mariahilferplatz. A location to construction unnoticed by the public but now offers a small isolated islands of urban culture, a new little life center.

It is a pedestrian-only bridge spiral shaped links the two banks of the city of Graz An artificial island on the river Mur that construction meets the requirements needed for a pedestrian bridge but also provides different services and stays.

Based on the idea of ​​the city of Graz, the proposed an-artist-implanted artificial joint in the middle of the river to achieve two objectives: integration with nature and linkage to the city, an idea that would require visitors to adopt new perspectives guiding them along roads that were hitherto inaccessible.

The project’s goal was to break the Mur Island predominant isolation between the river and the city by creating a multifunctional platform, futuristic, to offer a new public space for the “communication, adventure and artistic creation.”

“… We wanted to design something that clearly demarcate two zones while the intertwine. People in the theater see the playground in the background, and when in the cafeteria, the courtyard becomes part of the cover. These two functions should not be separated radically, as the water flows around the island with permanent movements, we wanted to build something to continue flowing and changing all the time… “. (Vito Acconci, 2003)

The game designed by Vito Acconci forms not only creates an interesting inside-outside combination it offers a set of materials giving the best possible effect. It has created a new gathering and social communication, developed on the water and in the water, which becomes matter of connecting a pleasant experience.

The island, which is connected by walkways and ramps to both banks of the river, creating torsion in two zones of activity which function as two halves of an open shell, revealing aside the open environment of the housing and the other a closed dome.

In the outer bowl blue tiered amphitheater, when not used as such, becomes a place in which to sit and have a conversation daily.

At its closed and under the vaulted glass ceiling of the dome there is a blue and white coffee, where people can enjoy the terrace on the top or the restaurant-cafe downstairs. Flexible triangular and curved seats can be moved into the space to allow for different configurations.

The deformation of the cup at the top, and vice versa, forming a dedicated play area for children that includes a maze of strings in three dimensions and a slide that connects the amphitheater with the cafeteria.

The merger of the two areas, interior-exterior, is easily done. “… If people sit in the theater, watching the playground in the back and, if you sit in the cafeteria, are protected by the playground that is part of the cover of this….” explains architect and artist.
All areas within the island are connected by a spiral path that emphasizes the general shape of it, including the two access ramps and walkways that connect the island with the banks. Spaces can be used independently, can accommodate up to 300 people at a time.

The island also serves as a bridge linking the 47sq of water between the two banks of the river Mur.

The island is composed of several interconnected structural elements and creating a steel grille and glass Lucite. The structure rests on a platform that is supported by two pillars of the bridge that are not in sight.
The defined rounded dome theater and café intertwined with the bowl cavity give a small playground.
The rubber edge of the upper deck makes a turn down to create the stands with profound ways around it in some places, in others several bar tops at different heights, to the terrace.

Behind the bar, the wall creates shelf for bottles, and a cash register. Upstairs, the perimeter of the deck furniture is swirling inward. Water pours from the shell of the dome, in the river, on the terrace, you feel closer to the waterfall on the dome.

The proposed structure proved to be technically difficult. The substructure including embankment, dry dock and assemblies, and construction of the parts of the island with ports connecting the banks of the river, were built during April and June 2002.
From May to October 2002, the structure of the island was transported, assembled and painted in a dry dock. Between November and December 2002 the island was moved from dry dock to its location on the river and the pedestrian bridges on the island on the banks of the rivers were installed.

The Mur Island was officially opened to the public in January 2003.

In the construction of this Island Bridge have been used materials such as rubber, asphalt, steel, acrylic, glass, water and light.

With the use of transparent materials is to highlight the lack of boundaries between visitors and the water and create the feeling of sitting in an air bubble ready to leave.

Different peepholes offer the opportunity to see the city and the banks in new ways and from different perspectives. The mountainous landscape around Graz is reflected in the steel of the structure and through the peepholes, multiple lattices or crystals of the shell.

During the night the island is lit with blue lights, as a warning to shipping. This element of the project was designed by the French artist Laurent Fachard.
= 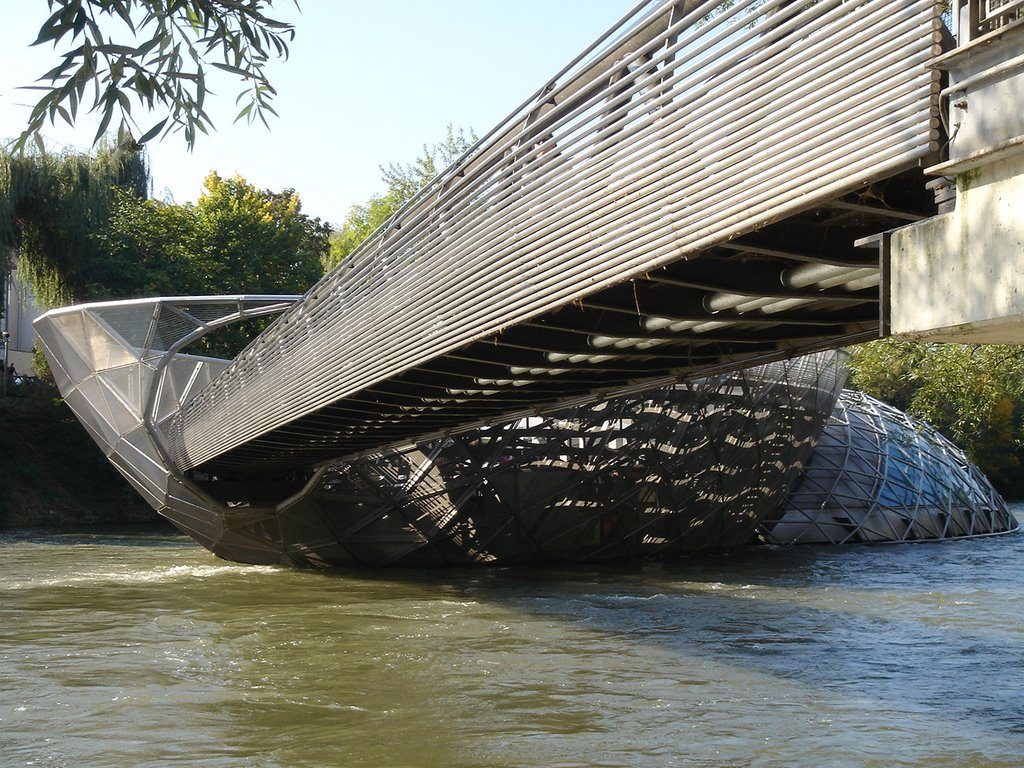 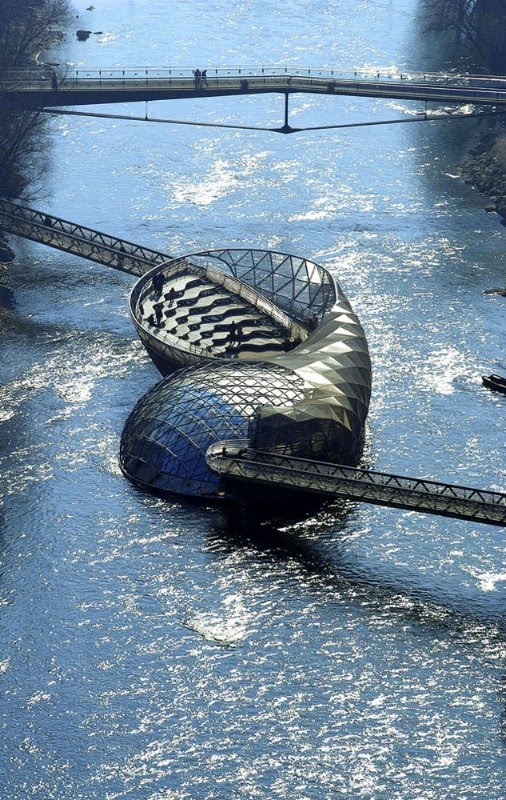 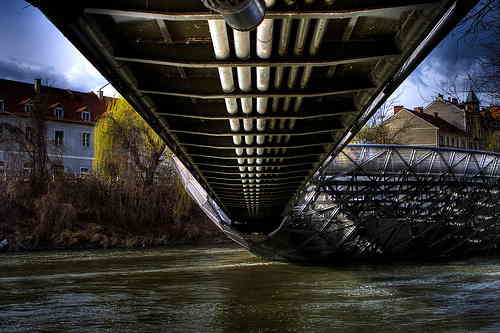 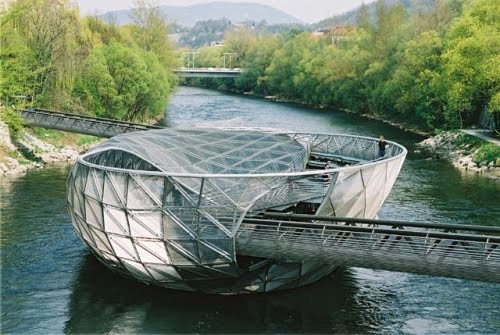 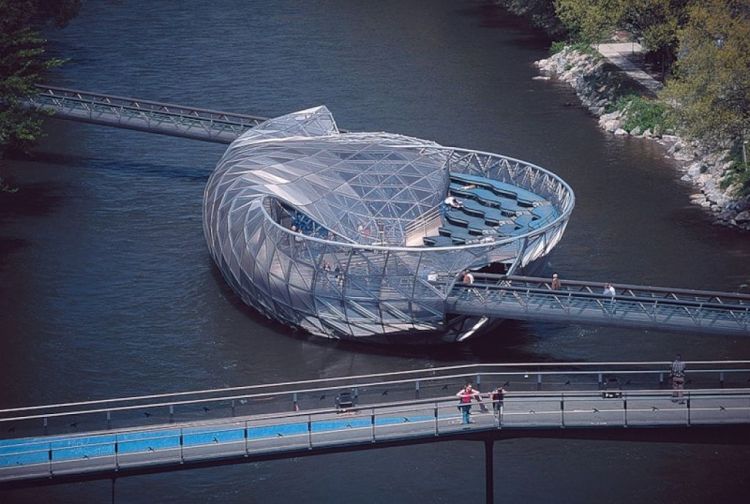 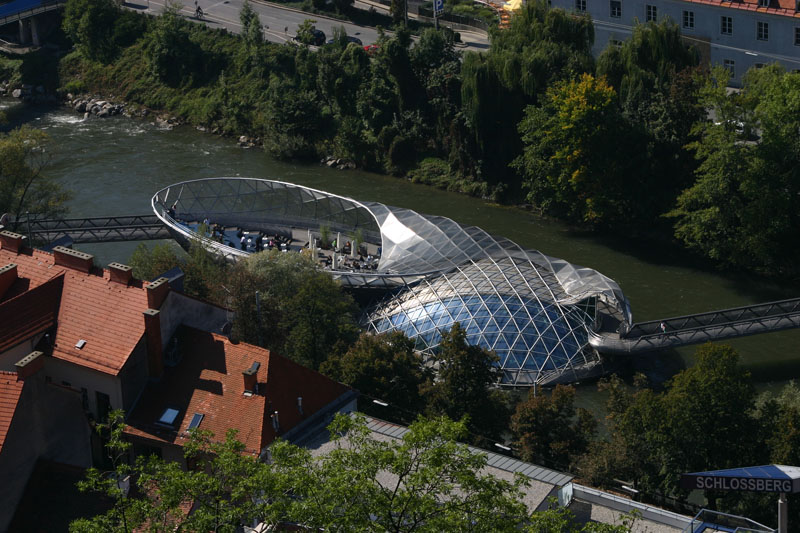 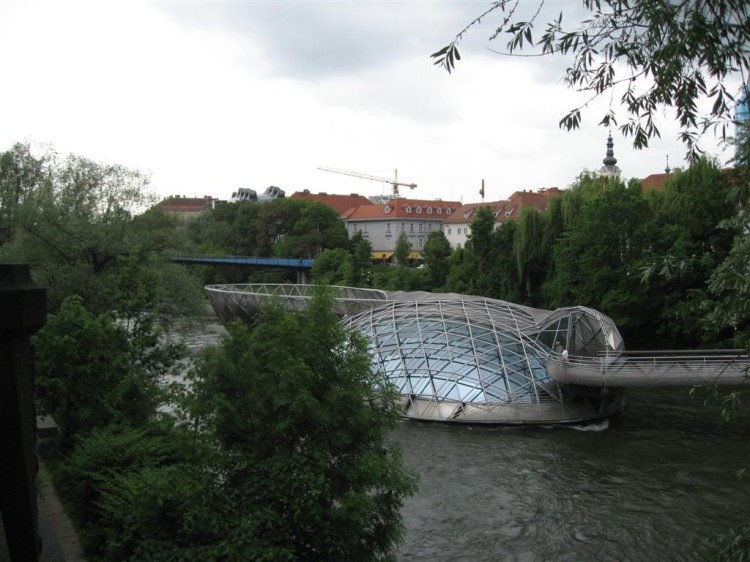 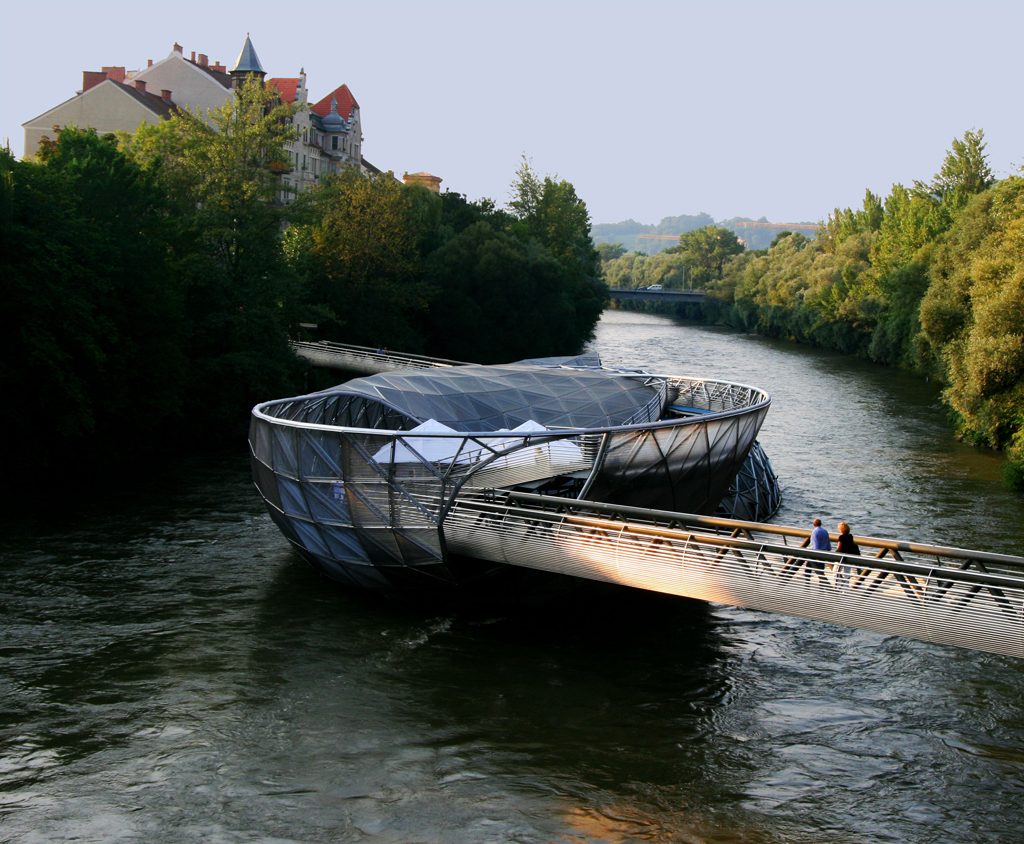 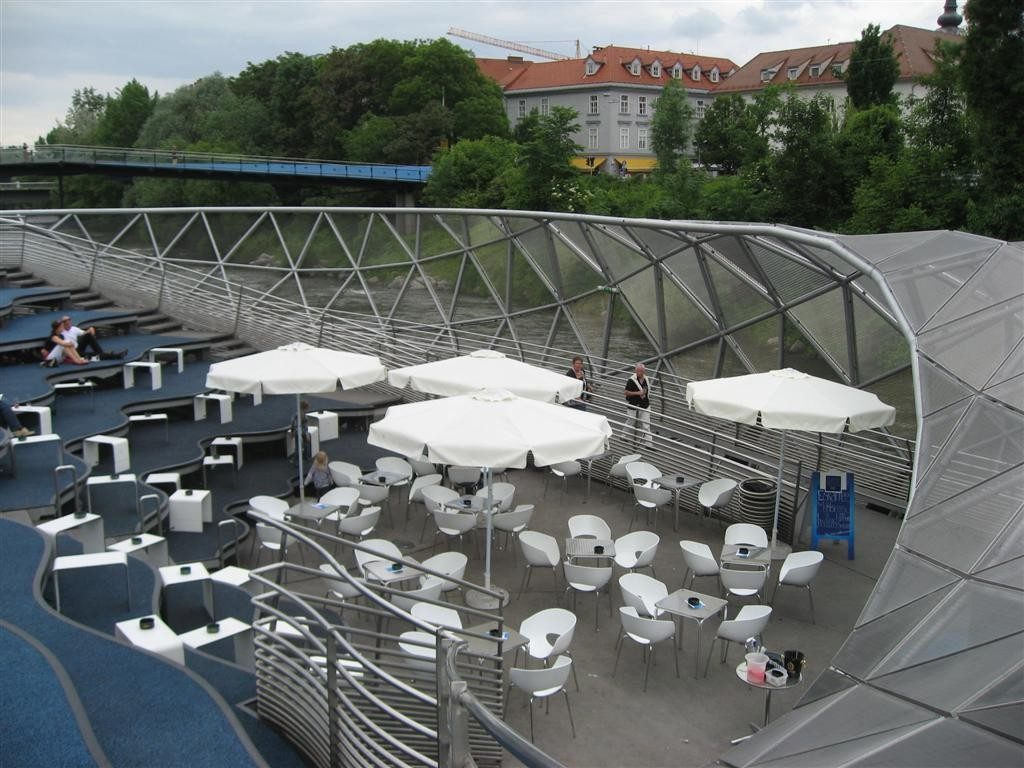 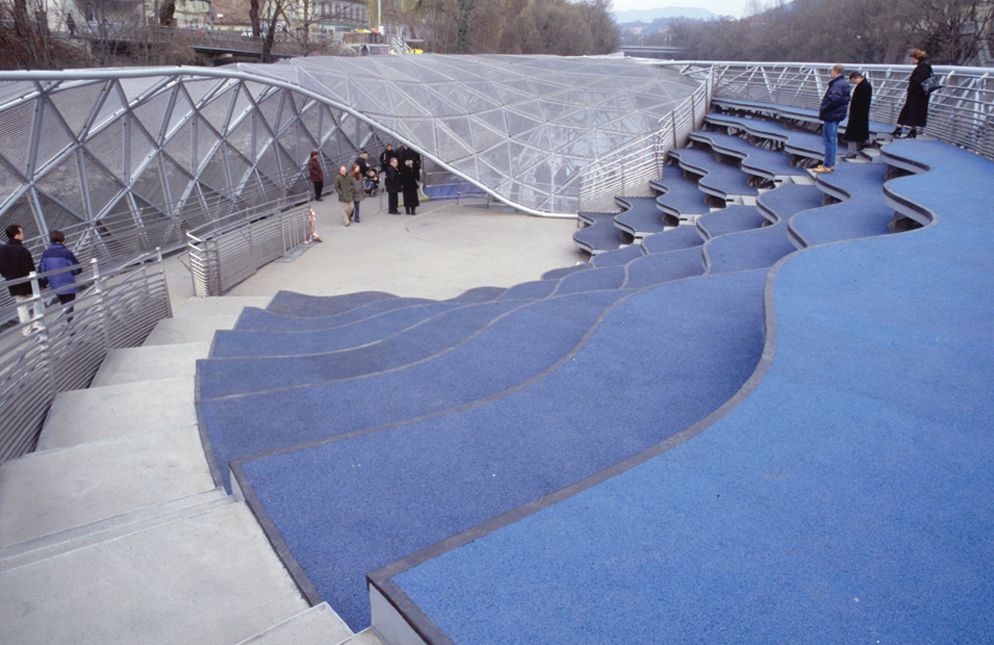 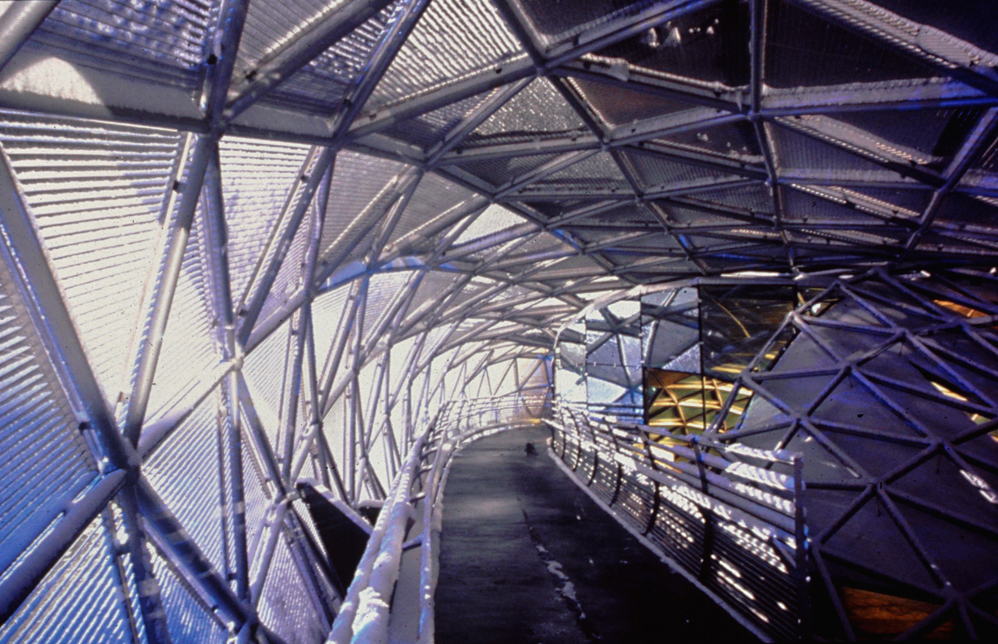 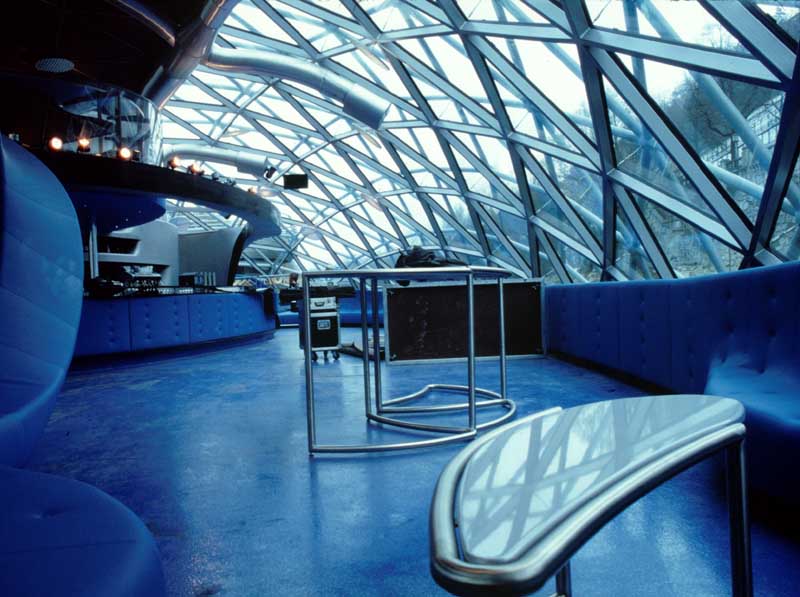 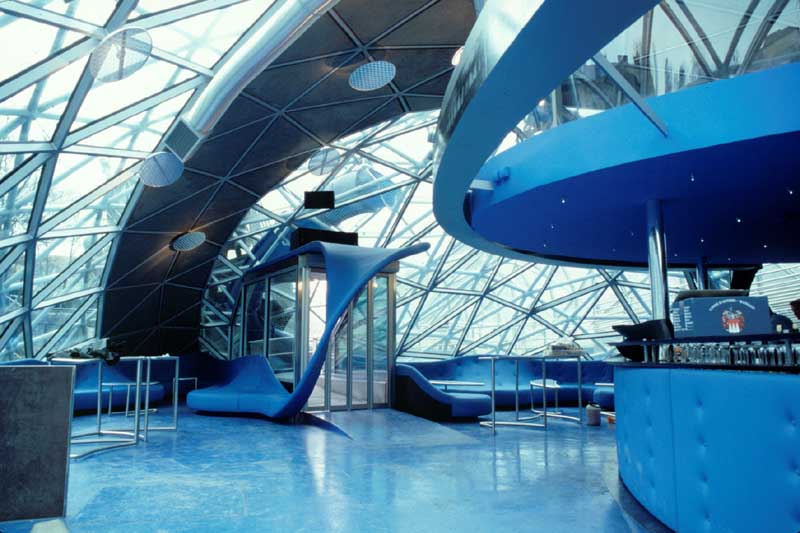 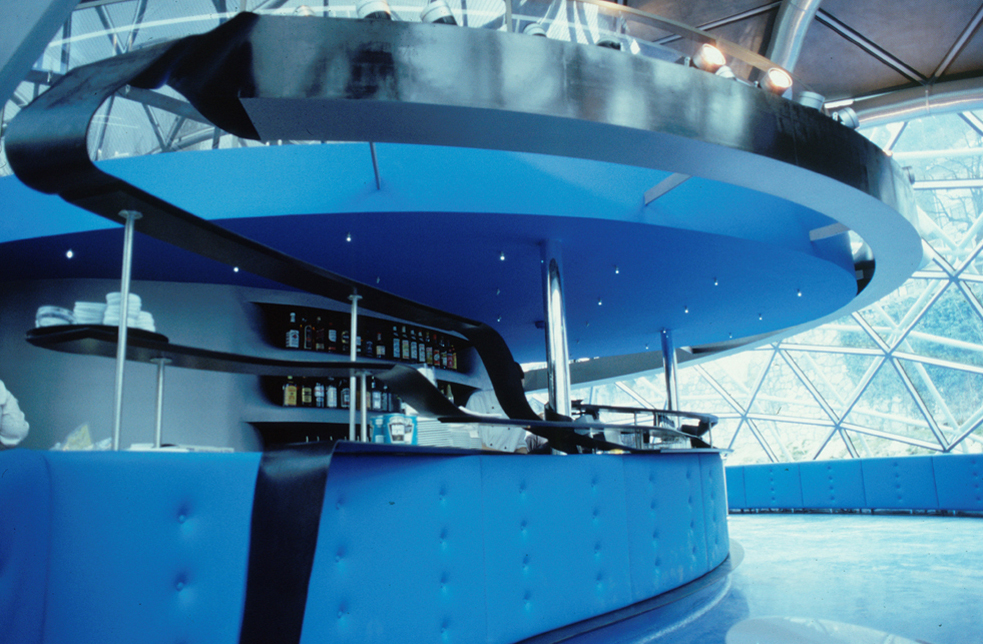 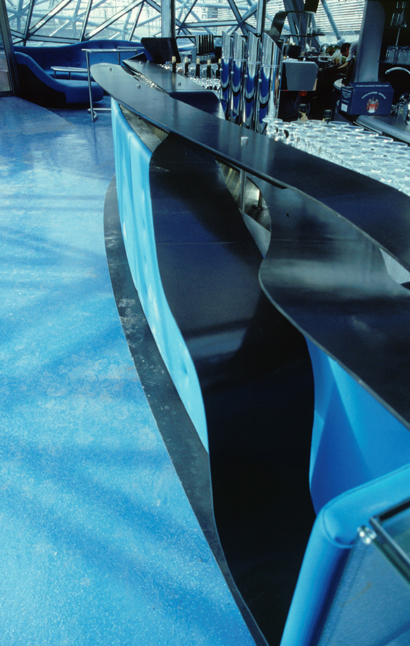 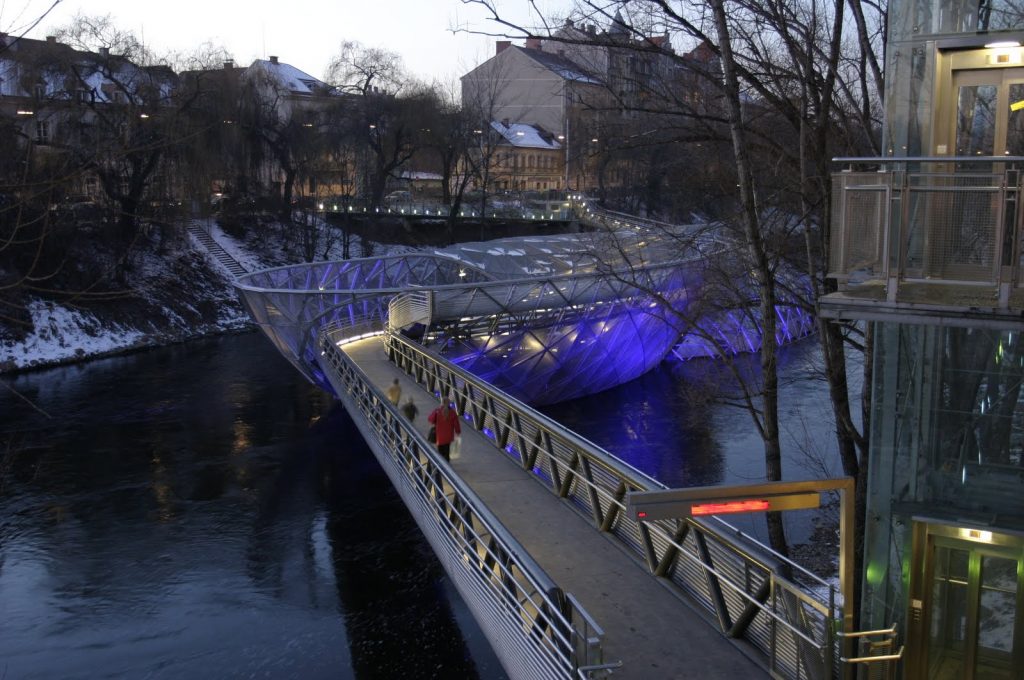 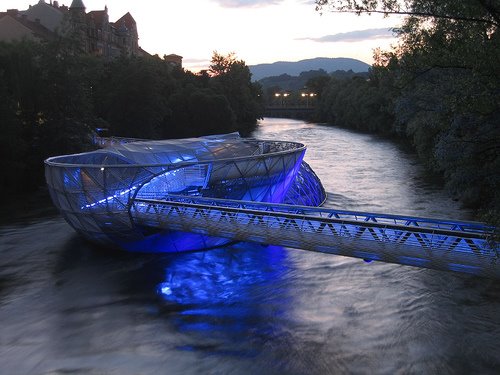 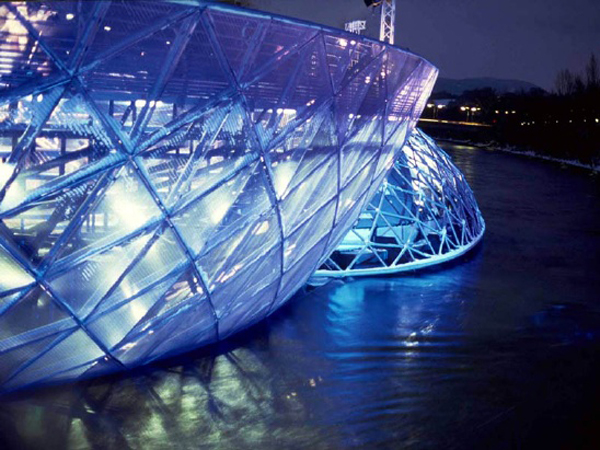 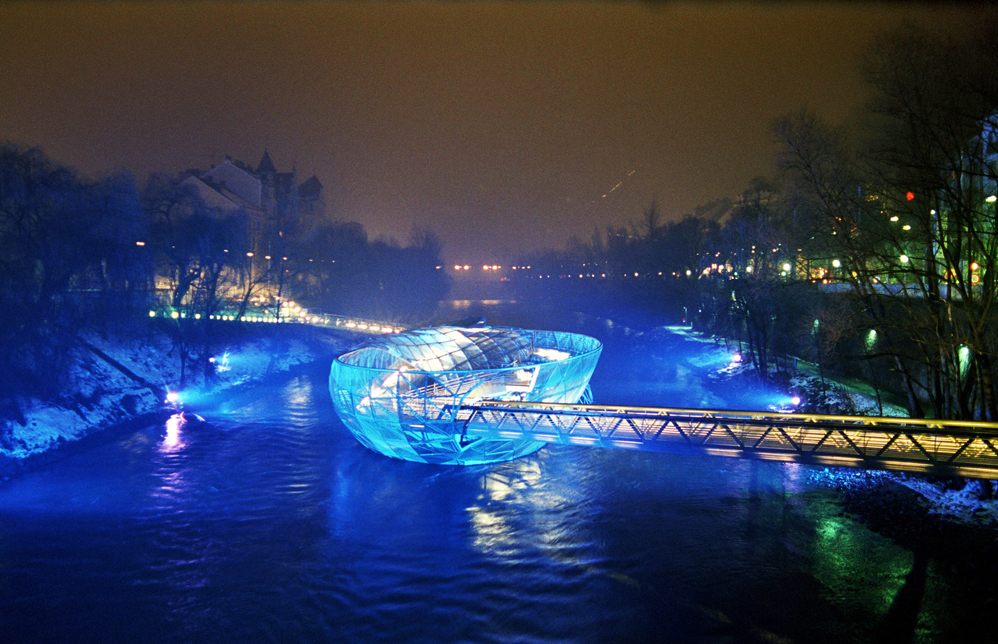 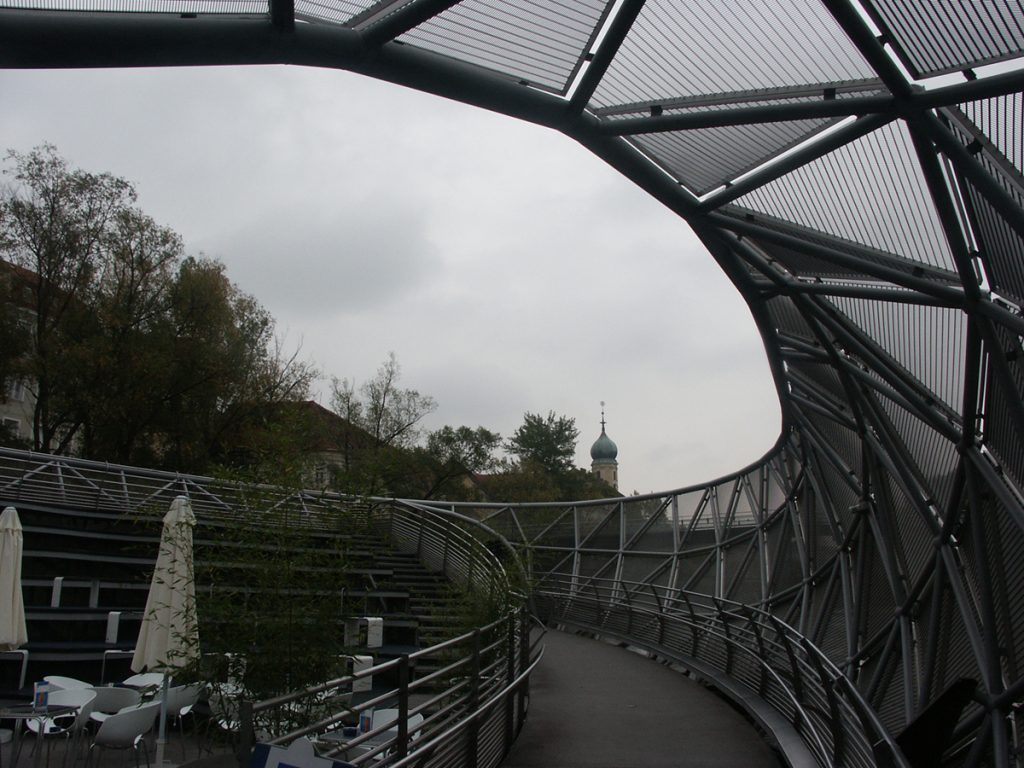 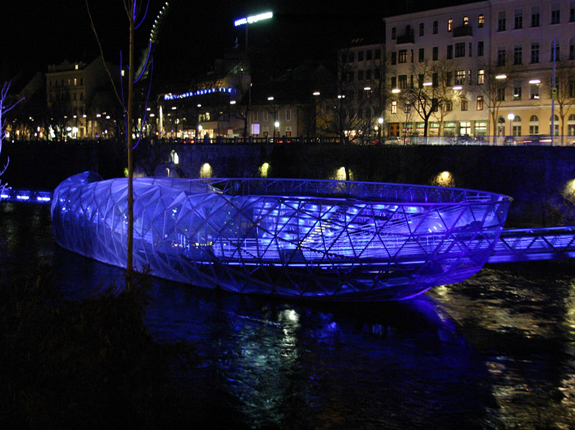 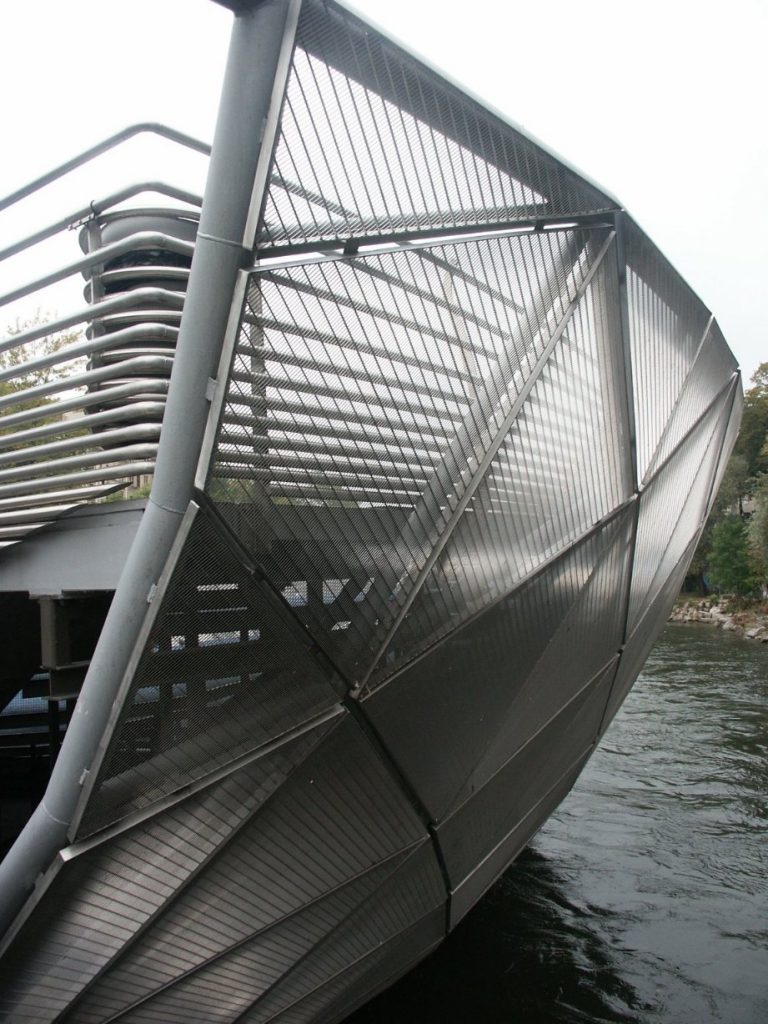 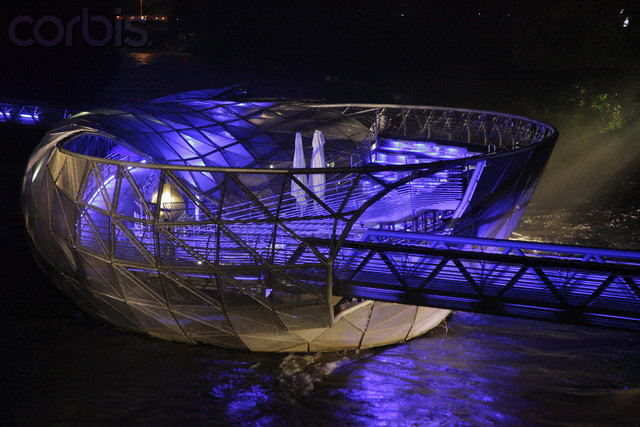