Monument to the March Dead

The monument named “Märzgefallenen-Denkmal” (Monument to the March Dead) was installed to commemorate the death of those who emphatically opposed the coup d’état in 1920 in the city of Weimar, Germany. The attempted coup was led by Wolfgang Kapp, a German right-wing Conservative who was against German democracy, in March of that year.

In those years, Germany suffered through a climate of tension. Kapp’s movement failed due to numerous strikes and protests against.

Within the Bauhaus a large number of students and professors denied the facts and claimed to be in favour of the socialist position. Although the Bauhaus had remained neutral with regard to the events, Walter Gropius made the decision to enter Weimar’s contest of artistic ideas, set in 1920.

The commission of the monument was set by the trade union syndicate (Gewerkschaftskartell), who were included in the contest. It was won by Gropius‘ studio who, thanks to a sketch and a model made by his young collaborator, Fred Forbat, was able to build it. It was later demolished in 1933 and reconstructed in 1946.

The monument can be found in the main cemetery of Weimar, where the piece is displayed in commemoration of those killed in the events previously described. It is a very accessible space, enclosed by three sections which form angles. This creates a circulatory, ascending path, where the visitor can walk round, up and on the monument, as it is made of strong, supportive materials.

The proposal made by Gropius‘ studio was to establish a relationship between the monument and the location of the graves of those who were killed, which were found next to the crematorium. The main idea was to create a continuity between the existing graves and the collective group, headed by a lightning bolt which would rise from the ground. However, it was not to be, as the bodies were exhumed and the graves moved, and so they decided to move the site of the project.

An abstract composition based on drawings taken from the original sketches reflected the common struggle of the fallen.

They aimed to represent their shared and admirable qualities: dynamism, flexibility, integration, great potential and the use of expressionist vocabulary. The lightning bolt also evokes the arising of the living spirit of those buried under the soil.

Although in principle they had contemplated the construction in limestone, they were limited to reinforced concrete due to the costs. However, for its reconstruction, there are various options such as a superposition of stone slabs over the concrete. 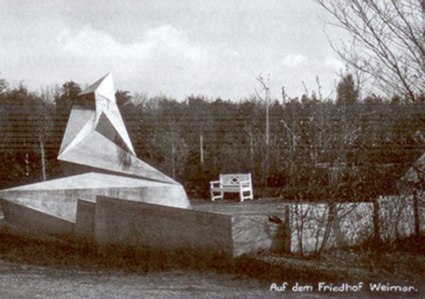 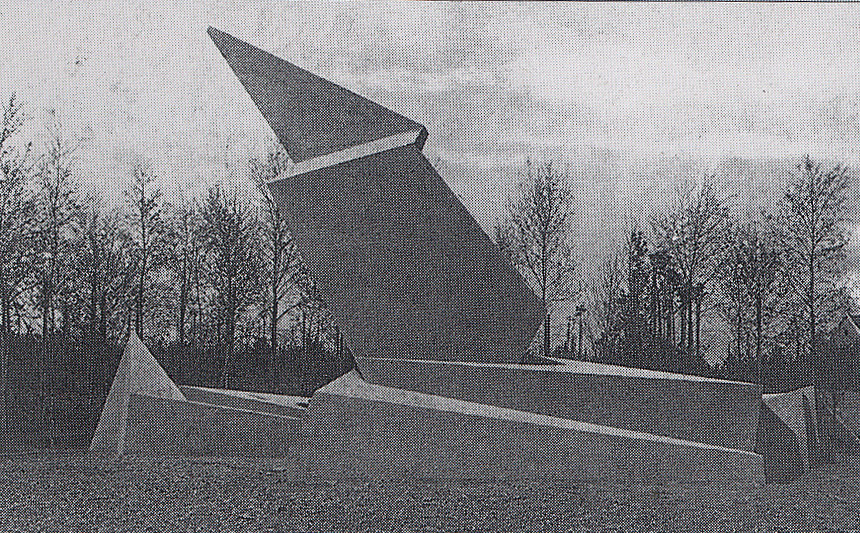 Monument to the March Dead