In 2004 the City of Madrid issued a camp of International Ideas for the new building to celebrate the 11 M. 289 projects were presented and the jury including 22 for pre-selecting the winner.

The study FAM (Formidable apple flavor) from Madrid, made up of five young architects, was the winner of the contest.

The monument is presented and responds to emerging approaches invariants that were maintained throughout the process of defining the transparency and permeability.

The cylinder of 11 meters in height is located next to the entrance of the Avenue of the Atocha station, at the confluence of the Paseo de la Infanta Isabel, Avenida Ciudad de Barcelona Alfonso XII and the street in Madrid.

The monument was created in the bowels of the railway station in Madrid.

It is “a view from within, from a space that creates emotions.” This defines the team of young architects in Madrid, the monument in homage to victims of March 11, 2004, organized on the occasion of the third anniversary.

Beyond the intimate relationship with the place, the monument if the indoor air, “the space of representation that illuminates every day for the victims at birth and sunset.

The design of the sculpture was “the expression and the sense of Spanish society” after the attacks, said Gil-Fournier (one of the architects) as well as the attempt to convey the “immateriality” of those feelings and “make eternal. ”

The project has two readings of a place that is inaccessible referred open look from the city and the silent heard from inside the station. In its relationship with the outside world, is the force of the moment to be trapped forever.

The material qualities of the monument, but do not express the intention of the proposal. From the outside, make him an object where the scale is modified and the intensity of light is variable, giving as a vital presence within the city. Is the light you want to make their own monuments, removed from reality to create your own world of silence.

There are two elements that make up the monument, which is closely linked and meaningless without the other one: the glass cylinder and the room under ground.

The glass sculpture is composed of two distinct parts:

In the basement is opened from a large room where visitors can read all the messages of solidarity and the names of the victims. The natural light that penetrates from the outside will see the words in an atmosphere of absolute concentration. The external light is full of nuances and reflections caused by glass and a material called ETFE.

Only from inside this room who have called ‘Blue Void,’ is’ visible ‘and you can understand the meaning of the monument.

The sculpture should be viewed from below to appreciate ‘the air and the atmosphere that is breathed from the inner room,’ and understand its meaning, is the place from which it is inside the monument.

FAM architects were obsessed with creating a space where they could feel the void and made a cobalt blue room ( “For us, the gap is that color”).

The room is insulated from external noise, heated and pressurized. Meets the conditions necessary for their proper functioning in different seasons and under occupation to have.
The pressure makes the accesses are treated as locks. The positive is that the room remained standing membrane with messages.

It is located on the back of the room and connected to it for the proper functioning of all facilities, air conditioning, electricity and air extraction of the monument.

Made up of two different layers in their materiality and construction.

• The glass structure reaches a height of 11 meters. It consists of a shell structure, built in blocks of 30 × 20x7cm glass, with an irregular dome continues underground. These blocks are glued to each other, without using steel in the structure. To measure their stamina, each piece marked the day and time that was.

The structural concept it returns again to the construction of closed systems working compression.

It uses a single piece of glass, designed by architects, which adapts to the geometry given to train and raise the monument. The building is closed and not allowing the entry of water inside it. It has a weight of about 130 tons and is completely transparent and colorless.

This membrane is subject to air pressure. Some fans will create an overpressure in the room that will allow the monument remains in place without any element opaque dark the project idea

A room for pressurized membrane swollen by a pneumatic system. Pressurization system that makes the atmosphere inside is more dense and tight. In the challenge to seek transparency and avoid opaque structural elements is chosen by the air pressure to lift, tighten and stabilize the inner membrane, subject to a basic profile.

The project has been a pioneer in design and materials have not been fully developed to date, or at least not in the field of architecture. Has been the construction of the monument that has made progress in terms of research and development in different materials and their application.

Therefore, both pieces of glass, such as the application of the adhesive have been combined into a new building system that is traditional but you subvert the materials to fit the idea of transparent glass shell.

Furthermore, the use of a fully pressurized chamber to support a form ETFE membrane is something new in the construction of pneumatic systems architecture.

The piece is built by blocks of borosilicate glass transparent and colorless, under compression, which are associated with an acrylic adhesive that is cured with UV light to take the stiffness needed to allow the union of the glass without being totally rigid. This allows opaque elements do not exist in the monument, which together with high purity and total incoloración glass, allowing a view of the gap from the inner room of the station.

Blocks inside the front of the hall have been developed by architects with a specialist company to build curved glass laminated glass with these distortions, which suggest the movement of water. It is the first time that these glasses are built planes.

For the second layer (consisting of ETFE foil) achieved a 97% transparency is secured by a system of suction generated by the many fans that create a gap between the 2 skins. This will eliminate any elements that the opaque structure. The messages will be seen through the skin of glass during the day and appear differently overnight. This second layer of ETFE has an approximate weight of fifty pounds

Details of the construction

In June 2005 the architects of Germany FAM get the piece base of the monument: a solid glass block (in conditions below the normal expansion and more transparent). Shaped and allow comecoco solve all the problems geometric power rotated between them.

A UV lamp followed for four minutes it was used by masons to weld the pieces with acrylic adhesive. The same process that was repeated with each of the 15,100 pieces that make up the monument.

To the January 15, 2007, as advancing the construction process, the scaffolding went up. The workers always had to work from within the building, in a situation similar to that of a laboratory. Went there 24 hours a day in shifts of eight. Redoubt that ended up being called “the nest.”

Masons and workers who participated in the construction of the monument were of various backgrounds, from Africa to Latin America, passing through Romanian and Spanish. Glass sticking worked for 72 days, 24 hours a day since November 22, 2006, in morning and evening shifts.

Carry glasses to protect it from the powerful light of the lamp. Calibration made parts, separated by three millimeters to avoid contact between the glass and broke it.

• With Date and Time

On November 22, 2006 are beginning to rise 11 meters from the building with glass bricks, a unique architectural experiment that has proved a success. To measure their stamina, each piece marked the day and time that was.

It is the appearance that the mysterious blue room became the March 11, 2007, hours before they opened to the public. In one corner of the Atocha station in which at one time there was a bank, today there are few crystal blue waters and that separating two worlds.

Is the key element of the monument from the beginning. This has determined that it was a monument of glass, transparent, letting through. Should be a daylight (vertical), diffuse and, through the glass, causing a brightness shades.

• The guts of the Blue Room

FAM architects were obsessed with creating a space where they could feel the gap and made the room Colbalt blue ( “For us the vacuum is that color”). A room for pressurized membrane swollen by a pneumatic system.

In July 2006, presenting the appearance of the roundabout Atocha: a perfect hole in a semi huge slab to communicate with the outside inside the station. The slab was designed by a Madrid company that support the monument.

It is the appearance of the monument and ended in March 2007. Isolated in a roundabout road. Eleven meters of glass off from the bowels of Atocha. A type of construction ever undertaken in the world.

In August 2006 a black canvas became a monument in a mystery. The purpose: to create a lab-workshop site to control temperature (15-25 º C) and humidity (below 60%). 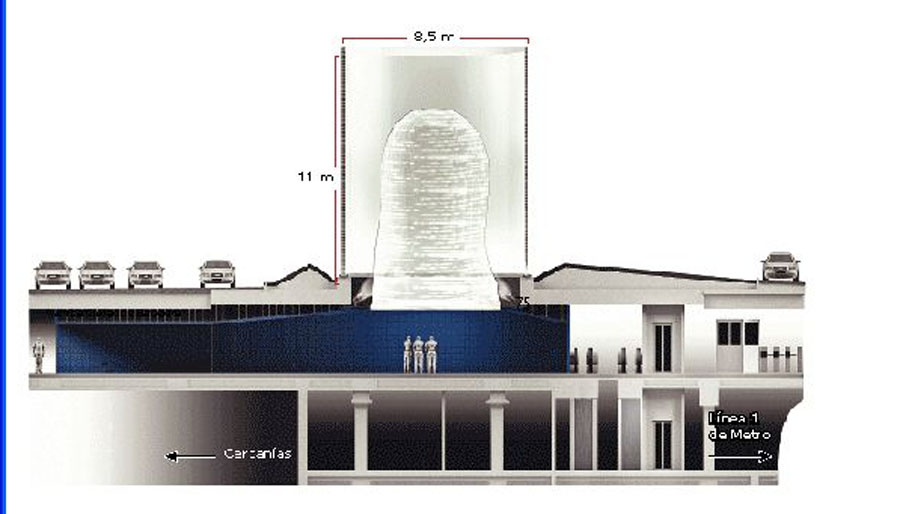 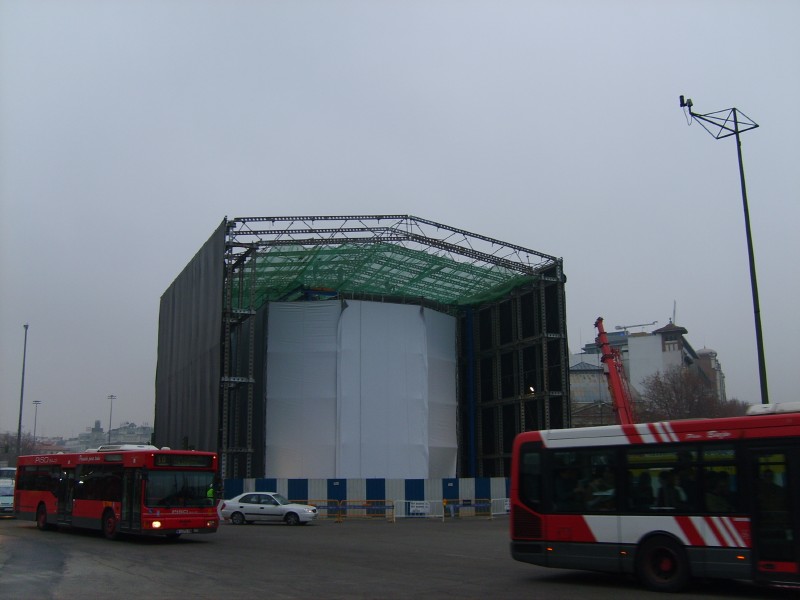 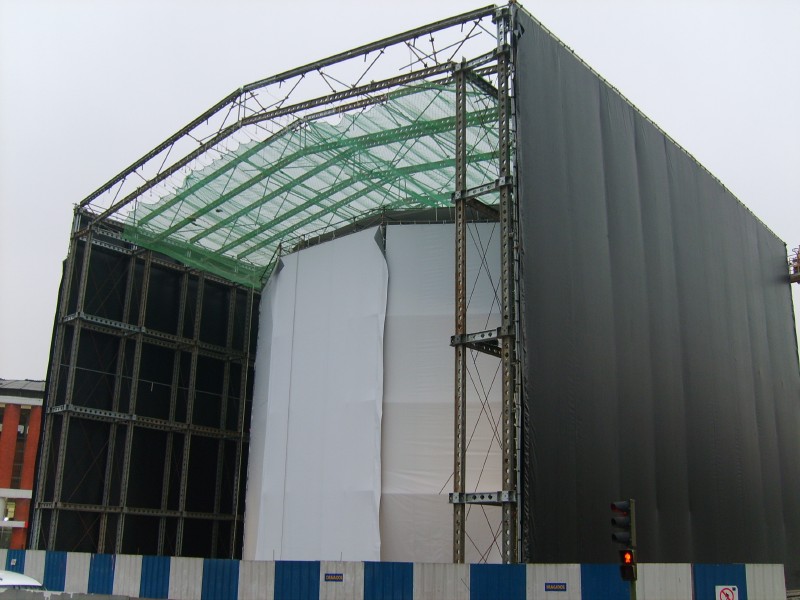 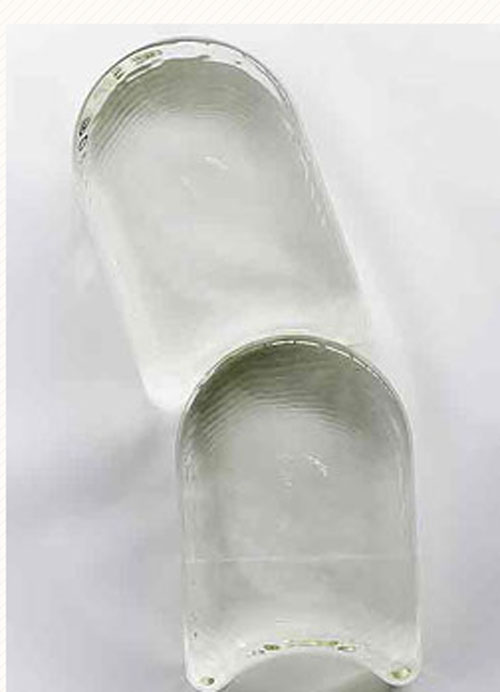 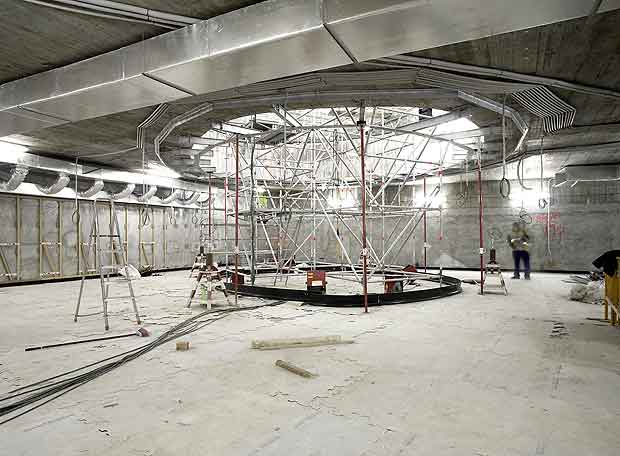 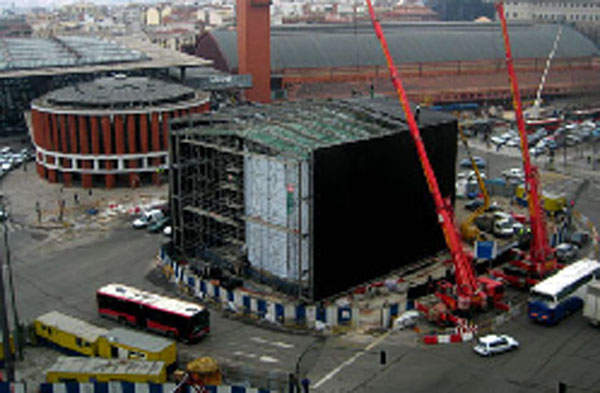 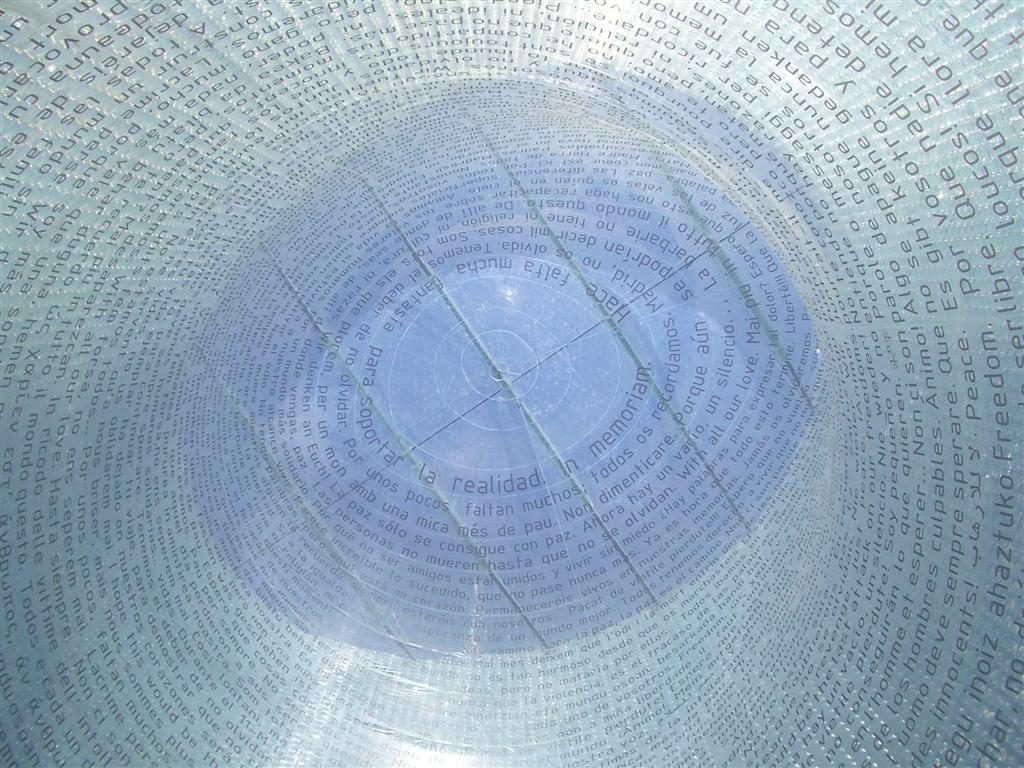 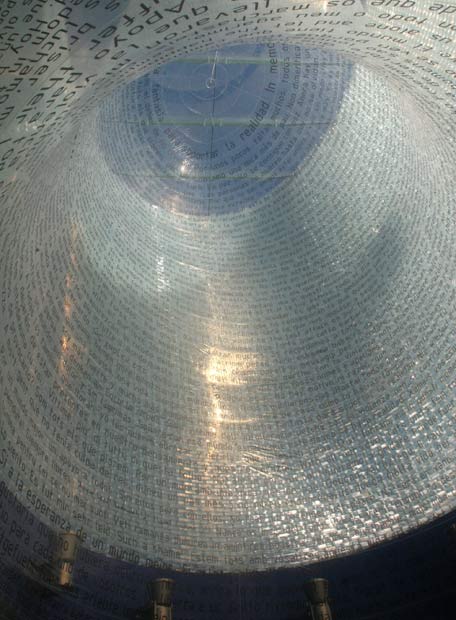 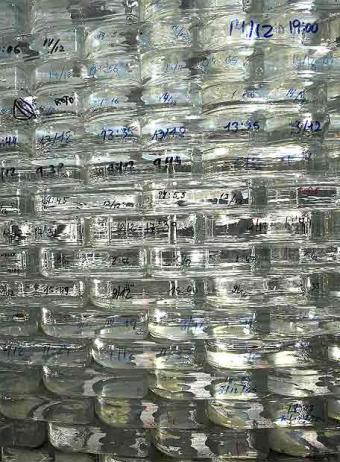 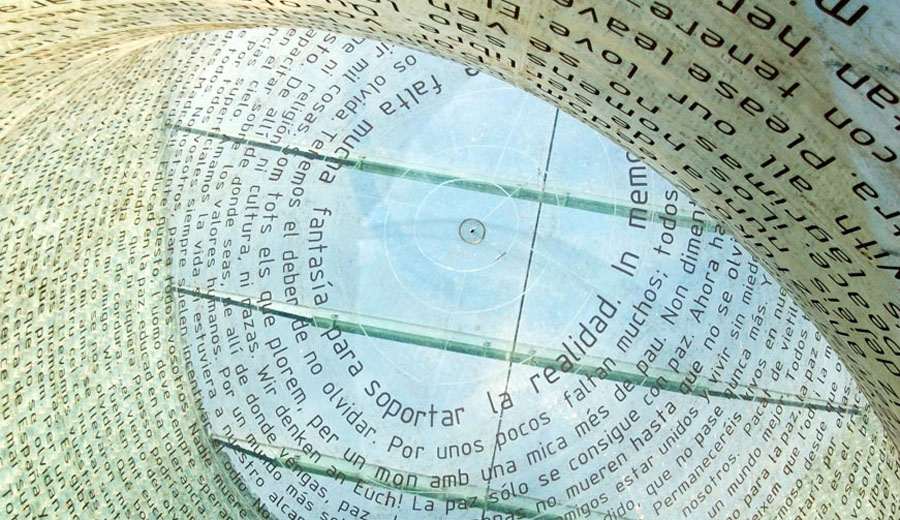 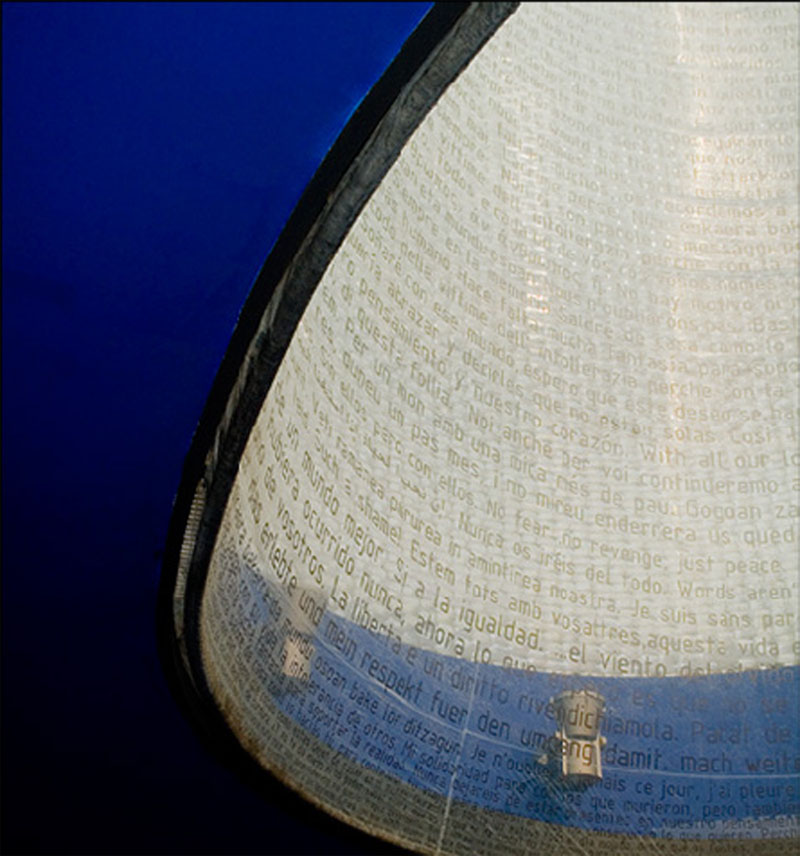 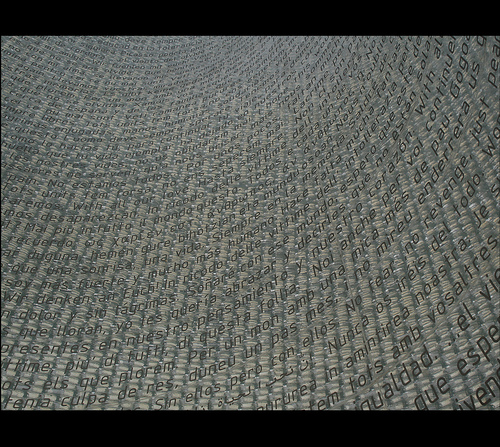 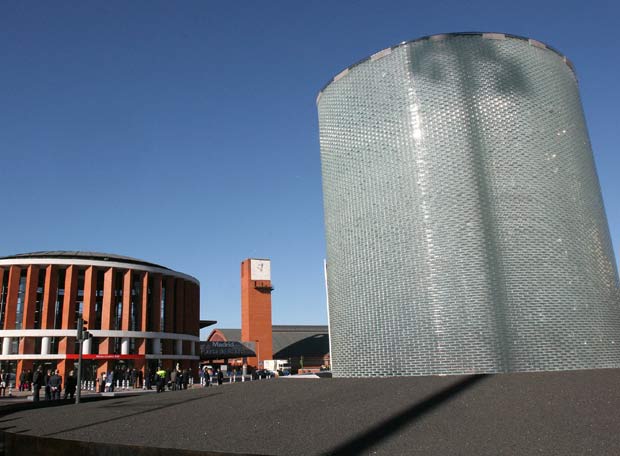 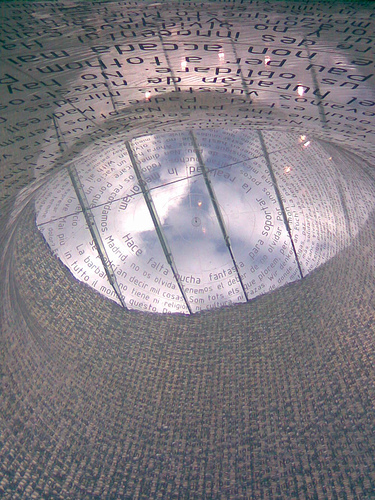 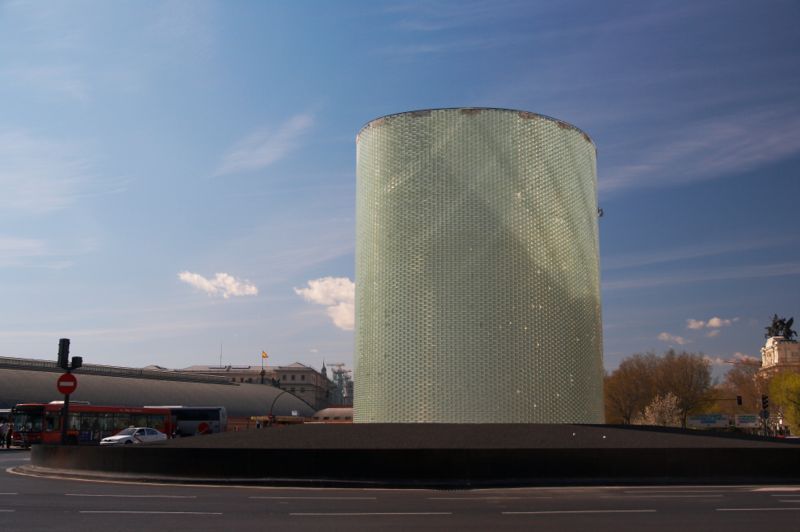 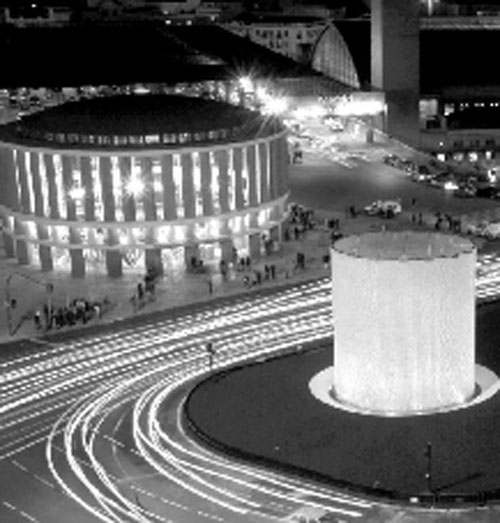 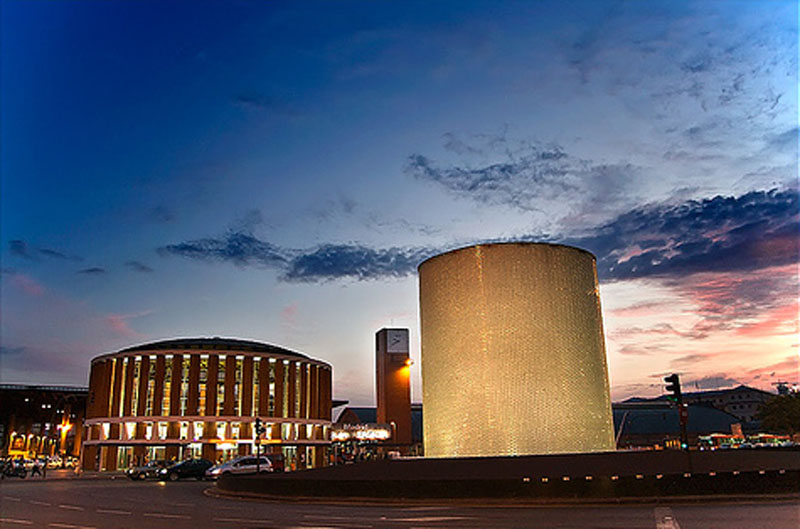 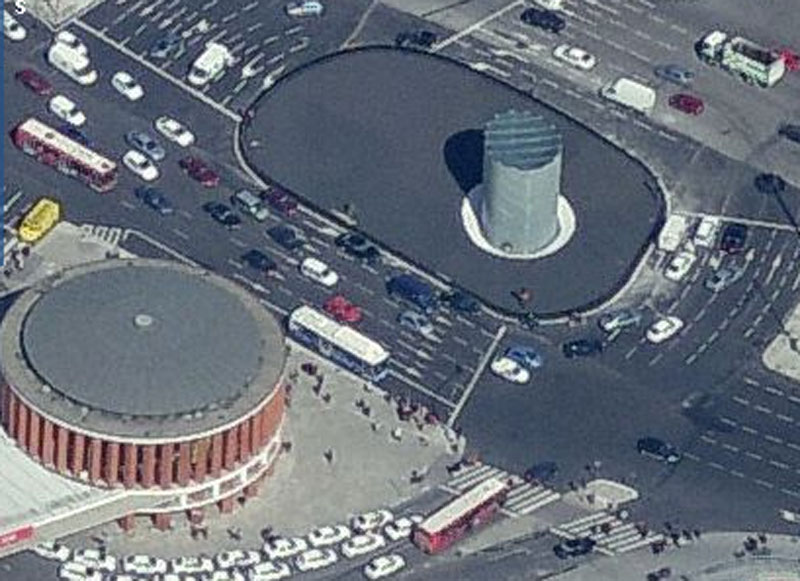 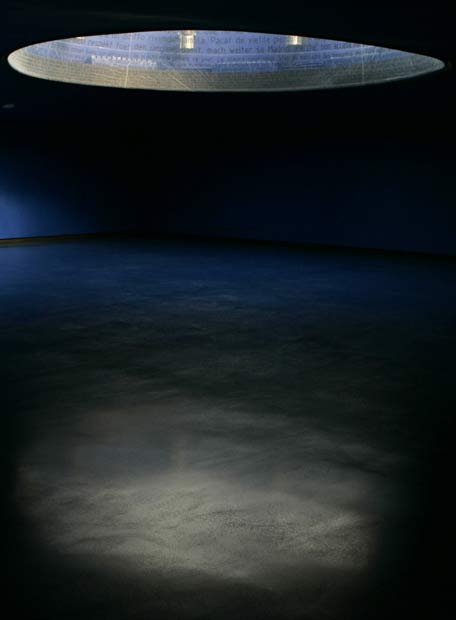 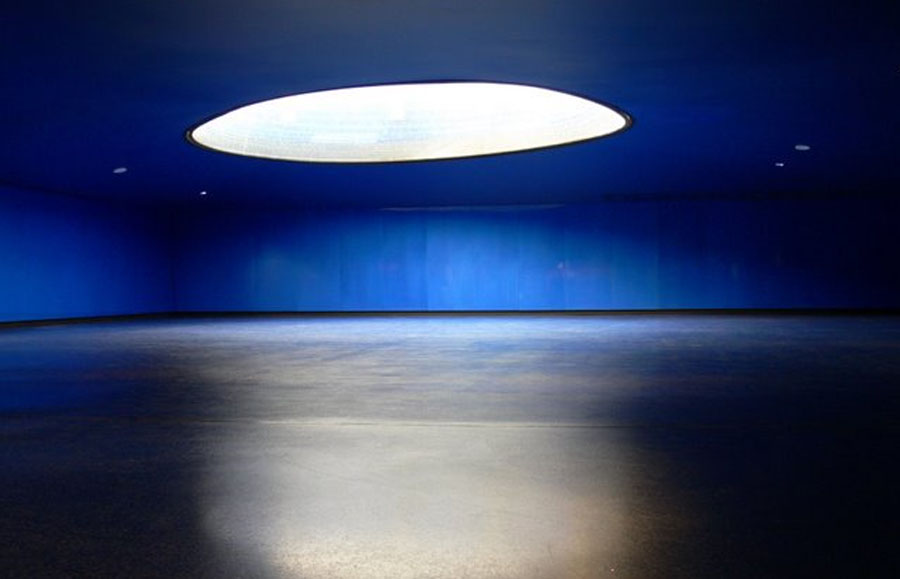 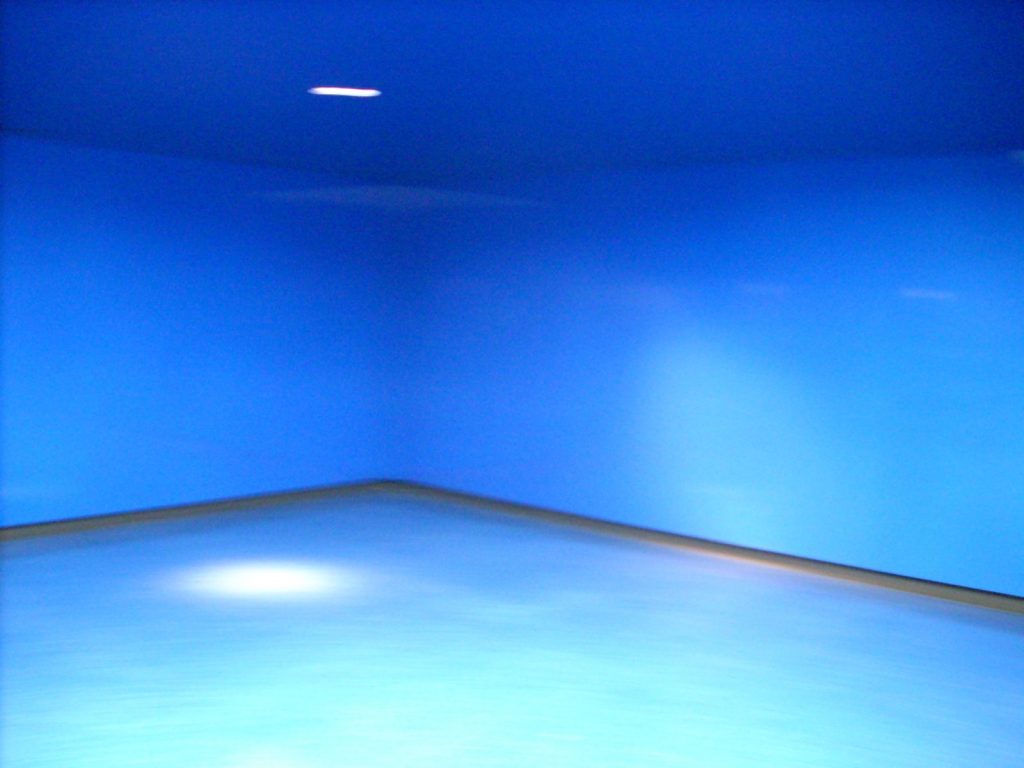 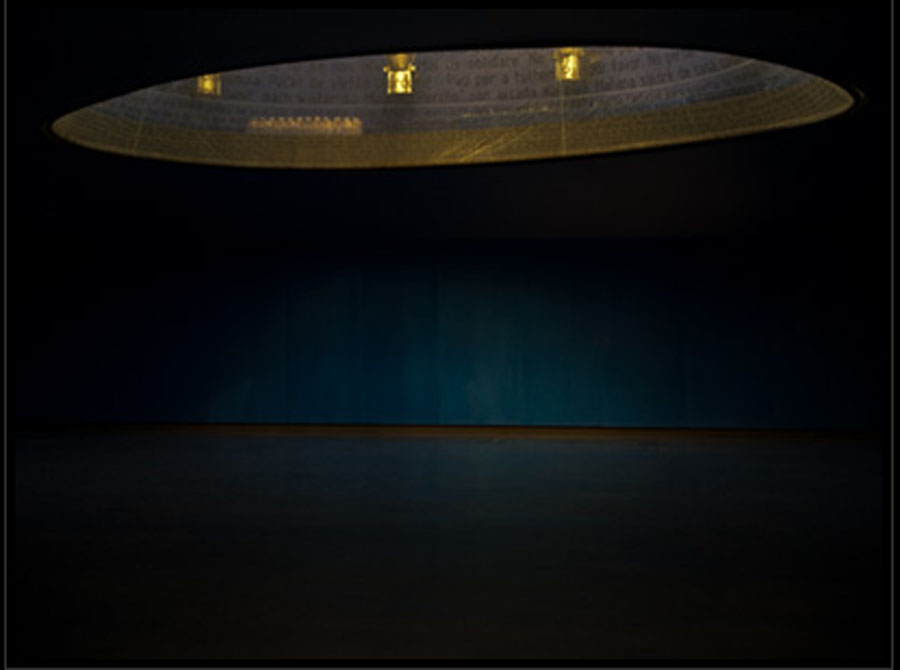