One of the art-historical documents from around the most important is the Middle-Sankt Gallen (Saint Gall). In it, we can see how the monks of the ninth century made the draft of a monastery, indicating not only the topography of the set but also provided criteria and formulas for modular construction in different sizes.
The map was drawn with red ink on five sheets of parchment, with an area of 77×112 cm.
A sign explains that it was composed of an important character, because it addresses Gozberg, abbot of St. Gallen of 816 to 837, with some familiarity.

The reason for the development of a prototype and a copy is irrelevant
before the change in the way of life that is being introduced in the monasteries, and has already been discussed in two synods. Discussed and agreed the changes require a new level of monastic living in areas that obviously are not fully accomplished in the spaces above
traditional.

But what has been discussed and agreed on actions that are synods
affecting everyday life and, therefore, are not fixed architecture
what you are looking for. Therefore, attempts to better fit the space for an architectural ideal match, which is subject to search and abbots of all authorities involved and experience with new solutions.

While it is clear that the plan was developed specifically Gift
andalusia Gozberto abbot, is the mystery of who is sent. Candidates have been going through the years from the allocation made
Mabillon by Sun in 1704, proposing the monk Eguinardo, adviser and biographer
eminent Charlemagne. It was also mentioned Gerungo, character
Prominent in the Carolingian court, to Frontario, Bishop of Toul, known
for his skills as a builder, a Ansegio, abbot of Fontanella; to
Radish Mauro, abbot of Fulda, a Regimberto, librarian and director of the
monastic school of Reichenau, and finally Heito († 836), Bishop of Basel
from 803 to 823 and abbot of Reichenau of 806 until his retirement in 823.
Finally the award to Bishop-Abbot Heito was reasonably substantiated

Interpretation of the plane

How to understand what the plane trying to communicate?

We think it clear that, described in contemporary terms, the program is a set of monastic architecture, expressed in a way, certainly original medieval. There are needs that must satisfy the monastery, not listed, we would like now, but in a graphic map that shows the dependence of premises in relation to others. It means a program needs, but at the same time, a graphical tour-operating a kind of organization, all in one scheme.

All elements are grouped together to accommodate within a rectangle, which in no way suggests or implies that they are built.
Simply occupy space on the sheet of parchment.

The researchers believe that this legislation should reflect the level agreed on several councils held in Aachen to discuss the reform of the great monasteries. These criteria were picked up by an imperial edict of the year 817.

The possibility of a size to the potential scale of the temple, the modular layout in the design of the package and organize the closing and services with a sound functionality are issues that during the invasion of Europe had been lost. In these small towns appreciate sacred rules of urban layout, almost hipodámico, which had been abandoned in the cities that were considered at the time, born spontaneously by simple adaptation to the social and topographical.

areas of the monastery

Detailed examination of the plane shows the difference between the element
characteristic, the core faculty, and temple-up parties.

In general terms, is the core characteristic that is detailed
with a thickness of walls and furniture distribution schematic. This core
that is closer to the architectural construible party.

With regard to the complementary parts, we see that can be identified because they generally do not have thick walls, but lines demarcating their areas, but did not show any difference.

We see the structure of a palace, a nursing bed, desks, storage, bakery, stables, latrines, granaries, even the management of orchards and gardens. The greatest interest lies in the presence of a faculty as orderly as we could see in the centuries of Roman and Gothic.

The importance of each element can be captured in the degree of detail in
it is drawn. No perimeter fence or wall surrounding it
this is not a real field. By the same token, there is no door or
clearly indicated for access to the set.

With regard to the core, if you look at the few monasteries from the Carolingian period for which data are available, we note that the churches tend to have no square and the cloister attached to one of its side walls.

Thanks to the recent remarks by Werner
Looking like the Carolingian solutions to the various tests, low observable in the ultraviolet Plano, we now know that before synods of 816 and 817 occurred in the following monasteries:

possible to the entrance of the temple.

more elongated apsidioles besides the two main apse, but the cloister attached laterally.

Has shown that one of the solutions discarded in the plane
Sankt Gallen included a transept at the western end of the nave, but was removed after inking and layout.
By removing the transept, the ship was lengthened to give the proportion of double square.

The cloister, in fact, no one is left to the center courtyard of a large building in the form of “C” inverted, attached to the temple.

The cloister is formed with three separate buildings, which are played at the corners and is attached to the temple, to form the central open space.
The faculty, however, has covered corridor perimetral, whose roof has to be extended in the form of eaves of roofs of four buildings involved.
We believe that this detail of the eaves to the corridor of the cloister reveals that the author thought the plane in the wood construction techniques.
However, we must not forget that in the construction field, a remarkable achievement of the Carolingian period was the retrieval and dissemination of techniques for building stone Roman, missing the European level since the fall of the Roman Empire.

Recall that the map is Sankt Gallen special place to house pilgrims monks.

Thus, it seems that all European mendicant knew the inner life of the monasteries, for having hosted them on many occasions, and therefore appreciated the conditions that was to rest, to study, to pray and attend the liturgical ceremonies, etc..

The self-imposed circumstantially to the monastery, he had returned to large garden, with the proceeds of which will help provide food to groups of teenagers who supported the preachers in their raids and missionary who worked around to one of the monasteries in multitude of daily tasks.

There were also house the stables where cattle which took everything. Used the milk is produced cheeses, yogurts, etc.. And finally, the animal is slaughtered for food.

It appears that this detail of the eaves to the corridor of the cloister reveals that the author thought the plane in the wood construction techniques.

However, we must not forget that in the construction field, a remarkable achievement of the Carolingian period was the retrieval and dissemination of techniques for building stone Roman, missing the European level since the fall of the Roman Empire. 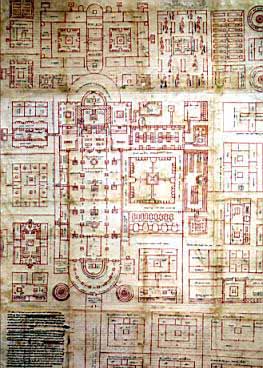 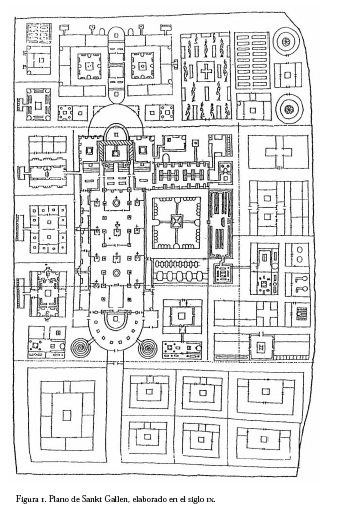 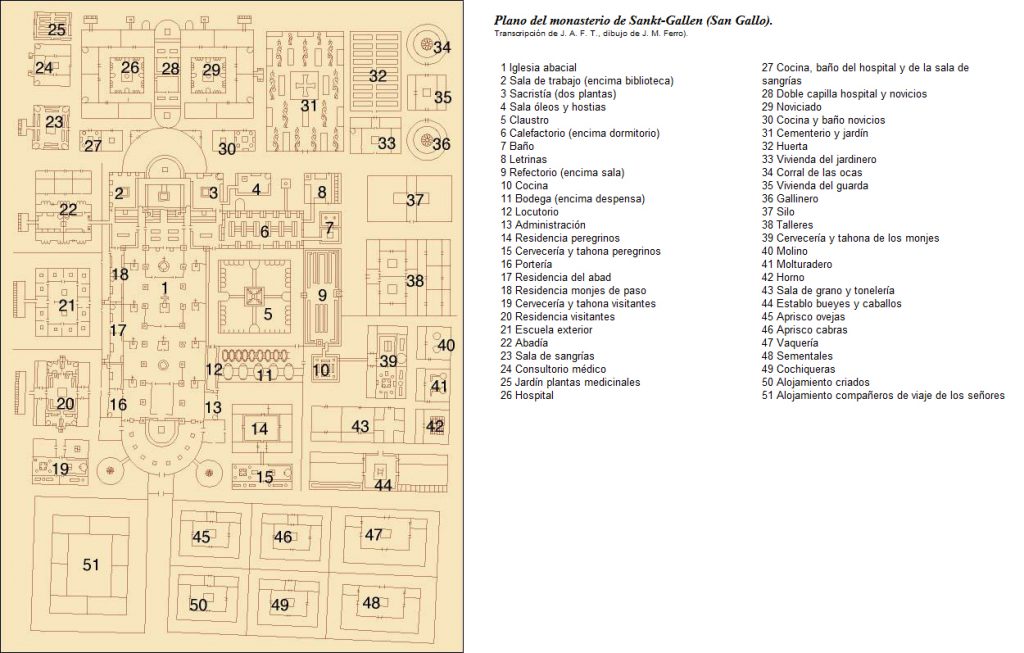