State Moorilla winery has an important, famous old wine cultural significance to Tasmania. Building on its grounds of this new building, millionaire David Walsh initiative, with 9.500m2 dedicated to museum represents the next phase of continuous improvement and development of the site.
The Museum of Old and New Art stands on a sandstone hill, below the existing 1950 building, the “Round House” Roy Ground, creating a visual and physical extent of the surface created by the platform leading the same and giving to the volume of the museum a new expression of interrelation between the building and the environment.

David Walsh made his fortune as a professional player, being as he says “one among 200 million people who can beat the odds”. Over the past 30 years has developed a high-tech “systems crunch” perfecting algorithms that allowed him to beat casinos and bookmakers. How it works ?, Walsh does not reveal, not even admit it rich…. “Some people think that a couple of hundred million dollars is not much money”… (D.Walsh).

The MONA is carved on the banks of the River Derwent, at number 655 Main Road, Berridale, in the northern suburbs of Hobart, Tasmania 7011, Australia. It is built on the ground of the wineries Moorilla Estate, the second oldest vineyard in Tasmania, producing wine cold weather. 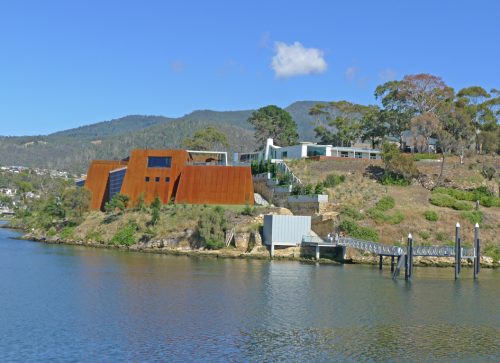 At the request of his iconoclastic client, the architect designed a functional Fender Katsalidis receptacle, not an architectural spectacle. Walsh did not seek financial support for the building because he wanted the MONA was entirely his own vision and concept Museum:….. a “subversive adult Disneyland”….

At all times has made it clear that this building is a negative space taken from the hill rather than a positive addition, reinforcing the bold decision to withdraw an entire side of the outcrop of the island and that found. The qualities of the “tomb” expressed in construction, pay homage to one of the highlights of the collection, an Egyptian mummy more than 2,000 years old.

This museum is different in concept and architecture, surprises visitors arriving by boat, hovering off the side of a way to family and once completely alien to its context. Family by jagged edges and vertical emphasis of its structure integrating it with its environment, particularly with large Organ Pipes of Mount Wellington that stand out in the landscape of Hobart.
A steep path that cuts the hill, with golden walls and heavily veined, carved into the sandstone of the site leads to the museum that surprises visitors with the landscape contrast offered by the rigid Corten steel and reinforced concrete slabs that rises the MONA.

The architectural form is angular and hard, unadorned materials and industrial. Part of the podium was covered with grass and native plants, but also with a tennis court, responding to the tastes of its owner David Walsh.

The entrance to the underground building is via an original Art Deco house 50s by Australian architect Roy Ground. The only visible modification of this architectural treasure is a surreal warped mirror wall that surrounds the entrance of a shape inspired by science fiction. A serene interior with retro furniture and a large central fireplace gives the cozily welcome, indifferent to the scale of the surrounding complex. 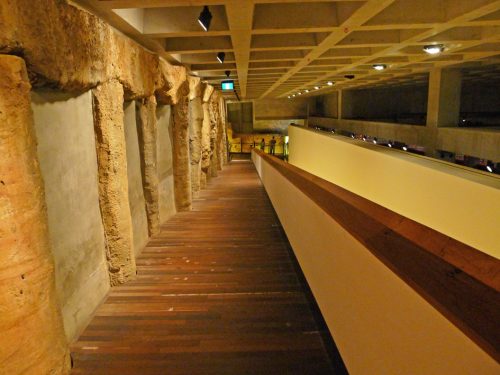 The only evidence of the existence of the museum is via an existing cavernous hole in the ground by descending a stairway steel enclosed between carved into the mountain cabin walls and round glass elevator.

The museum displays in the depths of the mountain with a coffered ceiling exposed concrete pads belonging to the construction made sixty years ago by Roy Grounds. The walls carved in stone without any coating remain in its natural state, with seams and crevices.

The spatial qualities are impressive and stairs, walkways and galleries weave their way through the challenging resulting void where once there was solid stone. As it descends, are revealed artworks, beautiful some, other conflict, the entire set is fascinating. The museum extends across multiple underground levels, including a cylindrical tunnel that gives access to library round room, another adhesion Building Grounds, which contains important texts on the history of Tasmania. 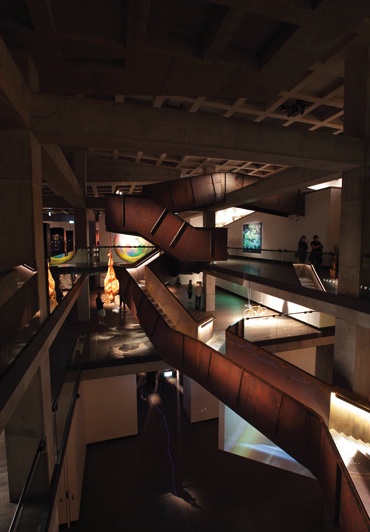 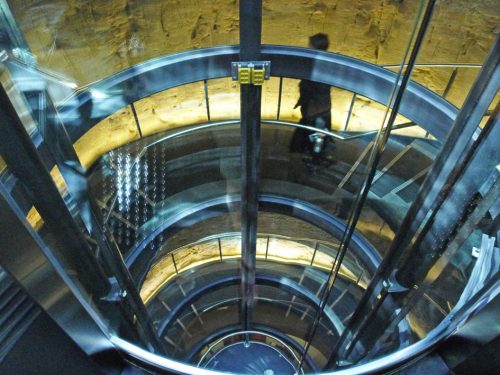 A green roof terrace and a sculptural return to restore the original height of land. The museum covers 9,500 square meters, of which 6000 correspond to exhibition galleries, including 1,300 square meters reserved for exhibitions. In gallery space, MONA is comparable to GOMA Brisbane or the Museum of Modern Art in San Francisco.

Its centerpiece, the heritage of the house of Roy Ground, became the museum entrance. Going down the spiral staircase from the entrance, visitors arrive at the lowest of the three levels of galleries, where a narrow corridor carved into the mountain leads to a volume surrounded by sandstone walls organizing space.

From the lobby is accessed via a spiral staircase that descends 17 meters underground at the lowest level of the three that make up the museum. The staircase is flanked by a wall of glass and steel on one side and the golden sandstone other. You can also use the glass elevator. 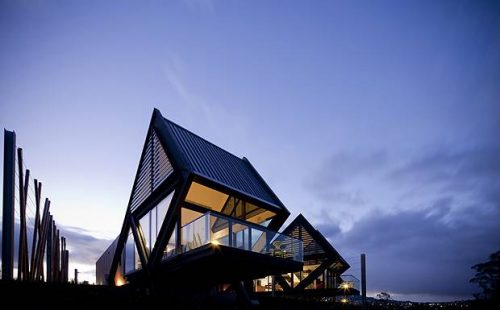 Since the level -3 ascent begins. The primary material sandstone of the Triassic period, continues throughout the entire stay, combined with steel, building doing other work of art fully exposed to the interior.
Planning cameras galleries and interconnections between the three levels is deliberately unconventional, leaving aside for a scheduled individual discoveries circulation.

Before the header of the building was “rebuilt” more than 35,000 cubic meters of rock were removed.

The structure, which required 6,000 m³ of concrete and is supported by 70 pillars dug into the sandstone wall of the cliff, is made with post-tensioned beams and lattice 2,100 forms for the roof. The roof sections can be removed to lift bulky works of art in the gallery of the building.
The underground structure is 140 meters long by 30 wide and is anchored to the rock, a task for which it was necessary to resort to techniques used in mining. 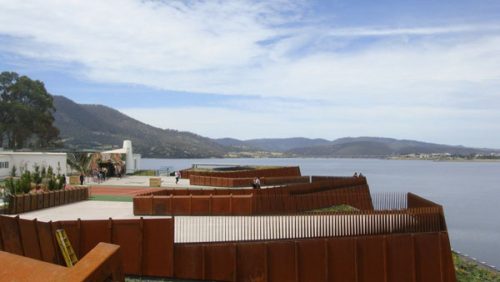 Outside the Museum of Old and New Art is made of reinforced concrete and Corten steel panels, ceilings landscaped trails and tennis courts with synthetic surface. The interior is made of sandstone, concrete, steel and glass.

The floors of galleries first level and third are polished concrete, while the average level is recycled Jarrah wood.
The tunnel 40 meters long that connects the museum with the library is built with concrete stormwater pipes 2.7 meters in diameter.
Sinking the building below the ground level inside. The air conditioning system is hidden by the screen walls which are floating above ground.

None of the pieces have interpretation, instead visitors are given a personal device called “O” a iPhone adapted. When the visitor stands in front of a work he provides all the information about the artist, the work and what is nearby.
After visiting the museum, if entered email at the time of giving the information, visitors will find an email reminding staff travel there done through the three floors, with links to all the work that has seen and details.
Much of architectural LED lighting uses KKDC carefully built into the structure so that the light and architecture become one.