Mode Gakuen Cocoon Tower is an innovative educational center in which three institutions work: the Professional School of Fashion (Tokyo Mode Gakuen), the Special Superior School of Technology and Design (HAL Tokyo), and the Medical College (Shuto Iko). Octube completed in 2008, is the second tallest educational building in the world, after Moscow State University (239m), 204 meters high divided into 50 floors. This vertical Campus has a capacity for 10,000 students.

The elliptical shape of the structure allows for more varied spaces, both its foundations and its top is narrow. At street level, the space was seized with gardening, top allows unobstructed views of the sky.

With the design of Mode Gakuen Cocoon Tower, Tange Associates offers a new perspective to the school of architecture at Tokyo to face the dense urban grid that makes up the city environment. A new type of architecture for educational spaces, auditoriums tower and accompanying cover successful environmental concerns and needs of the community with an unprecedented design so far.

The new school was built in Nishi-Shinjuku, Shinjuku district of Tokyo, Japan, characterized by its skyscrapers.

Improvements to the community was a major topic at the time of the project. Positioned as a gateway between the Shinjuki Station, the busiest train terminal in Tokyo, and Shinjuki CBD (Central Business District), the building revitalizes the entire area. A network of pedestrian passages, both below and above the street, open to the public, allowing free flow of people

Tange Associates efit epera that help transform the area: “… Some of the buildings in the immediate area surrounding Mode Gakuen Cocoon Tower have become old and obsolete. However this area is very important to connect Shinjuku Station and the CBD (ancient financial district). Our goal is to use the building to revitalize and reinvigorate this area and to create a gateway between the station and CBD… ”

The Mode Gakuen contest called architects to submit proposals for its design, with the only condition that the building was not rectangular. Participated mind about 50 renowned architects and over 150 proposals were received. The winning design was submitted by Tange Associates study presented a structure that resembles a cocoon. According Kenzo Tange this form of cocoon designed the building symbolizes a building that nurtures students who come to him.

The elliptical shape of the building wrapped in a crosslinked network of diagonal lines, embodies the “cocoon” concept developed by Tange Associates. Students who were to occupy, inspired the architects to create, grow and transform the idea of ​​creative design cocoon that incubate inside and feed them with knowledge in the future while the innovative design would serve as a inspiration.

The planted at lower levels about nature and softens the elliptical design, wrapped in aluminum curtain wall creates a nice shape to the eyes from all levels, minimizing the footprint of the building green.

The floors of the tower are simple. Three rectangular areas of classes rotate 120 ° around the inner core from the first to the last floor. At the core an elevator, stairs and the axis of the structure are concentrated. To avoid potential congestion that could cause the vertical movement, the three schools were set up at three different levels of the building, on the lower level, intermediate and advanced.

Vertical Campus incorporates three atriums with three free storey each, to replace the “schoolyard”. In these new lounges located between classrooms and are routed in three directions, east, southwest and northeast students conduct meetings being a space light and pleasant socializing.

The building adjacent low altitude, an intriguing egg-shaped structure with the great height of the tower, hides two spaces dedicated to events, the spacious foyer that can be used for meetings (SLALA A) and Room B, with capacity for 1,000 spectators. These rooms are used by both students and public functions.

Unlike many other tall buildings Gakuen Cocoon does not end with a flat superfice on top, prioritizing architectural form. However, an outside cleaning system and a space to descend helicopters are essential for a high rise building in Japan.

To provide a space of 10m2 has designed a retractable roof that is attached to the middle of the floor. At the request of the Tokyo Fire Department’s roof can be opened for 8 minutes with the help of a pair of hydraulic jacks, forming the required platform. The speed limit for this platform can be deployed is 15m / sec although it has been found that could still be done with double the wind speed aerodynamics without any vibration or instability during its opening.

Both the tower structure for the auditorium as is steel tubes filled with concrete columns CTF. In the foundation structure of a combination of concrete and steel reinforced walls RC cut was made, forming a raft reinforced concrete piles cast in situ. Piles position could not be the same as that of the columns due to the complexity of the arrangement of the latter, so it was necessary to build a slab thickness of 3.8 meters above the raft to transfer the vertical forces from the columns to the piles.

The main structure consists of three frames elliptical diagrams (DG) and a framework that forms the inner core. The building has a major cutting at ground level creates certain relative deformations in intermediate plants due to bending of each DG alone frames are rigidly connected with each other at the base and at the top. The structure can be seen as a portal frame with large rotations in the middle and smaller at the top and bottom. Drift floor perimeter frame is largely due to bending, while the inner core is at ground shear.

Oil dampers placed to exploit the deformations in the core and dissipate the energy associated with earthquakes. The core has six buffers per plant, starting at 39 to 15 and reducing the seismic forces that the structure must resist.
DG frames are located on the perimeter, giving the structure a wide stance, they are 24 meters wide with intersections every four meters at each level and curve in a vertical ellipse. The beams of the floors of classrooms bear the burdens and horizontally connected frames diagrammed with the nucleus preventing buckling thereof. Most classes are architecturally designed with exposed beams and ducts in the ceiling, while other areas are finished with seals.
Connect design was one of the challenges of diagrammatic structure because several of its parts with different angles agree on one point. Many meetings between engineers and manufacturers to find a reasonable solution for manufacturers and it was structurally sound were necessary. The solution adopted in the intersection node is made from a number of laminated and butt welded to the beams DG and on-site soil plates.

Mounting in place of the structural steel framework has developed three-story cycles the following sequences:

The exterior glazing panels were also assembled on site. Units 6m wide by 3.7m high. Installation continued to termination of the structural framework three stories below

The structure is steel and reinforced concrete, covered with a skin of glass and aluminum parts network
The tower has been designed keeping in mind the environment. This includes an integrated system within the construct produces about 40% of electricity and thermal energy consumed by the building, greatly increasing operational efficiency and reducing costs. It also reduces greenhouse gas emissions that contribute to global warming.
The elliptical shape allows uniform distribution sunlight, thereby limiting heat radiation around, while ensuring that aerodynamically disperse the strong currents of wind that hit the top of the city.

The exterior glazed atriums three stories tall and with a width of almost 20 m is made with a double arch beams Vierendeel truss resting on the ground to support the weight of the glass panels and resist pressure wind. The Vierendeel girders are hung from the upper beams of the structure so that no element of it obscures visibility.

Under the retractable roof deck has been installed a hanging gondola that its movement can surround the building by rails arranged in a Y with a turntable in the center. This system brings the gondola to all external surfaces of the building through extension and rotation of the arm that exists at each end of the rails as Y. To allow the hanger rotate the arm, floor and roof of the gondola support only three pairs of columns that intersect the steel perimeter is put on the same level arm hanger and allows the sliding door to the gondola. 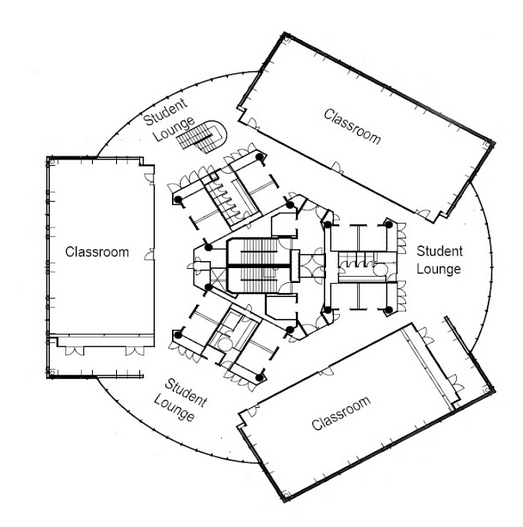 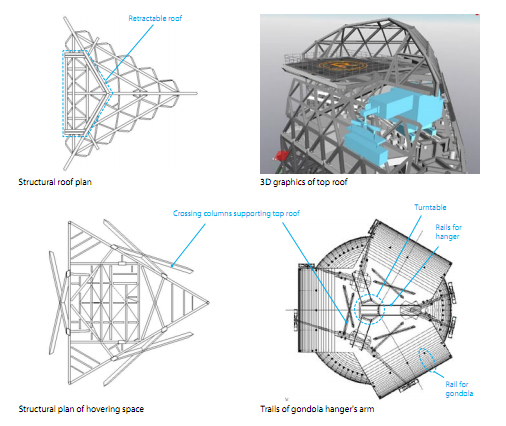 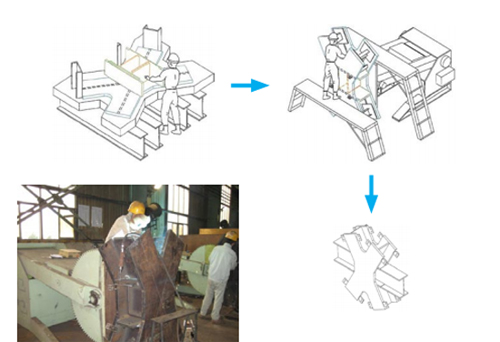 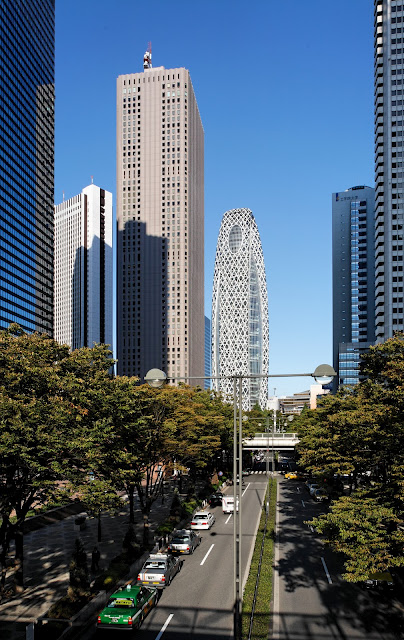 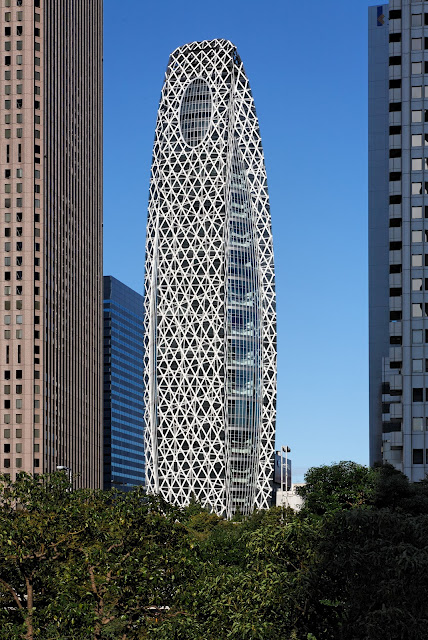 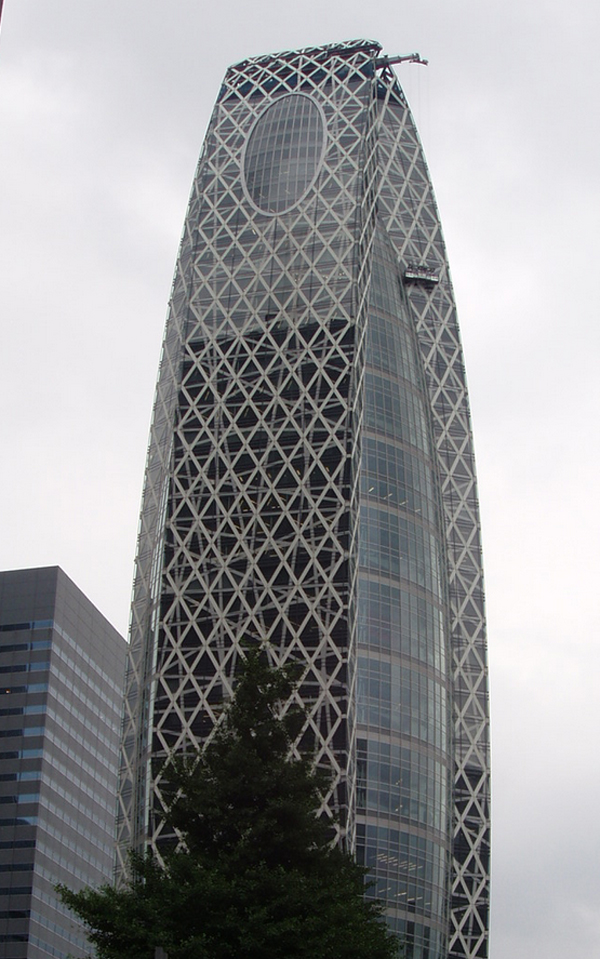 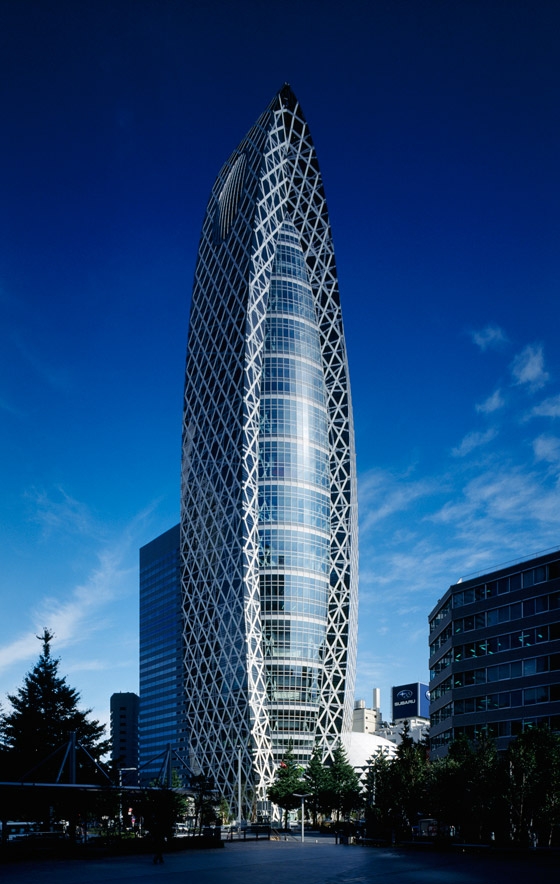 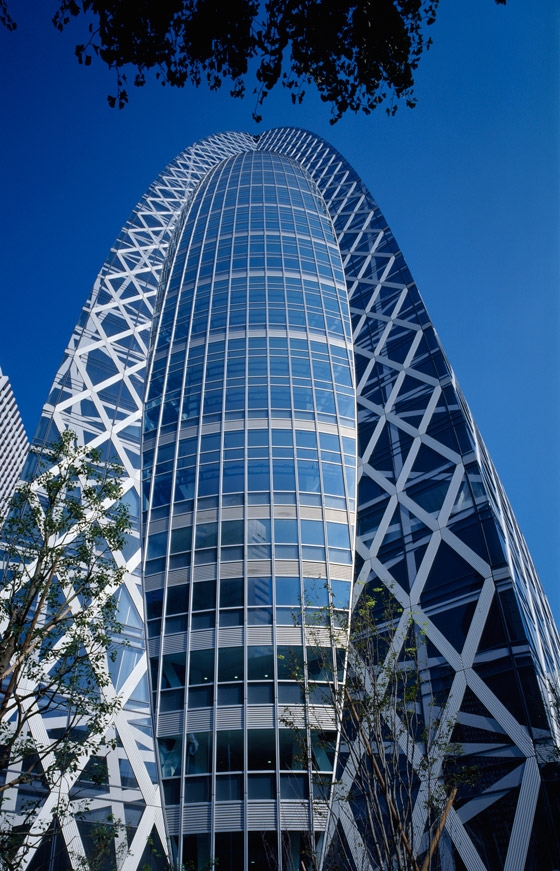 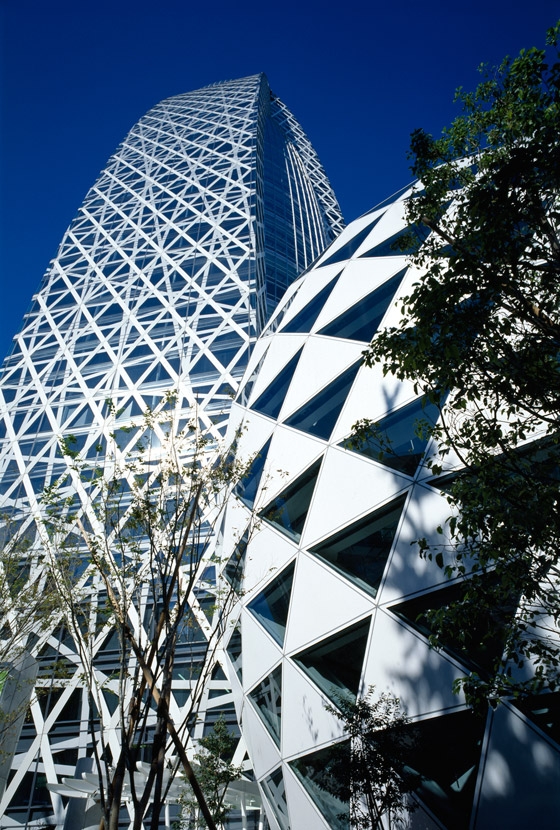 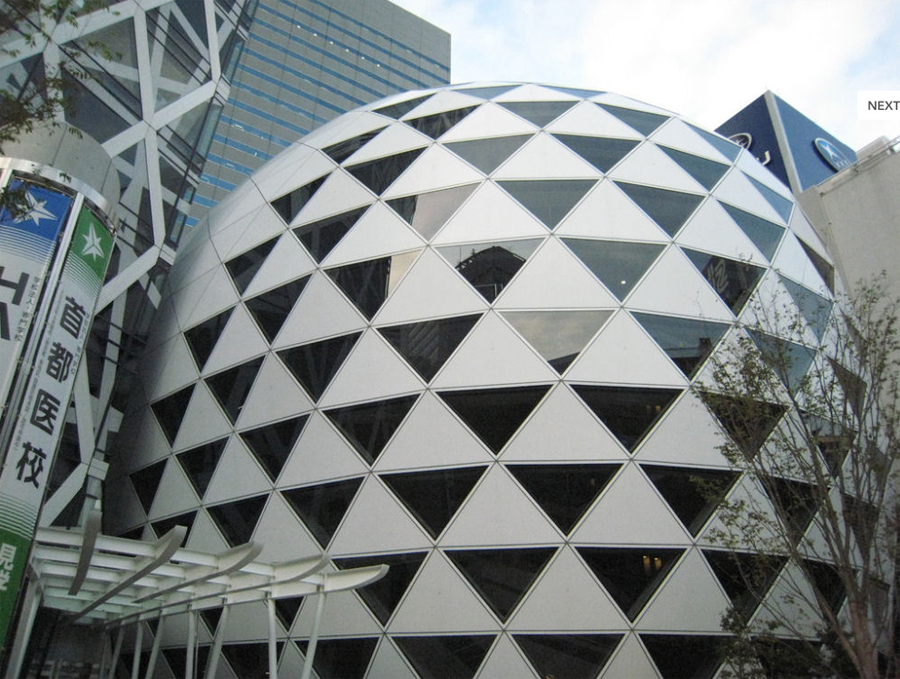 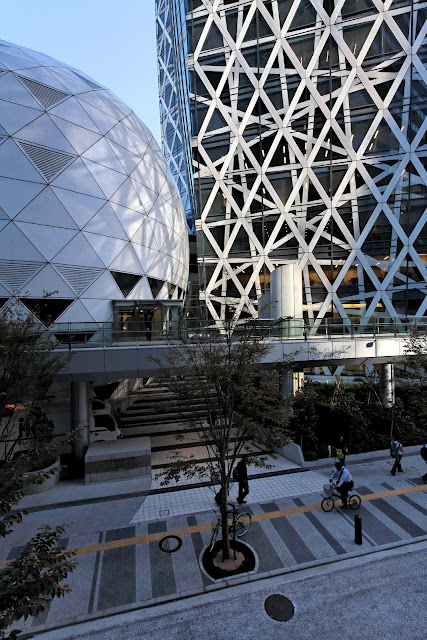 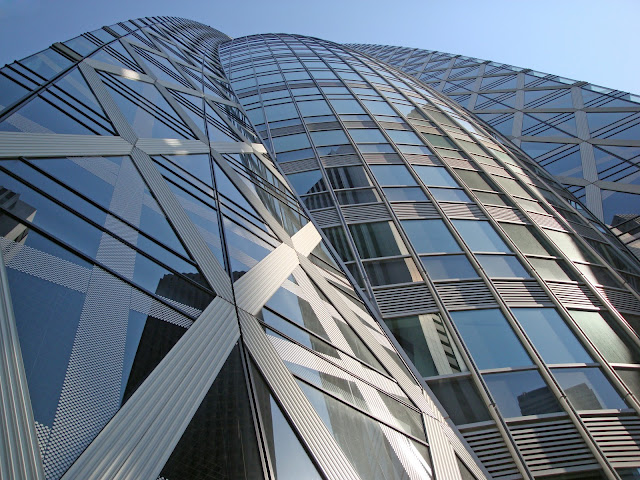 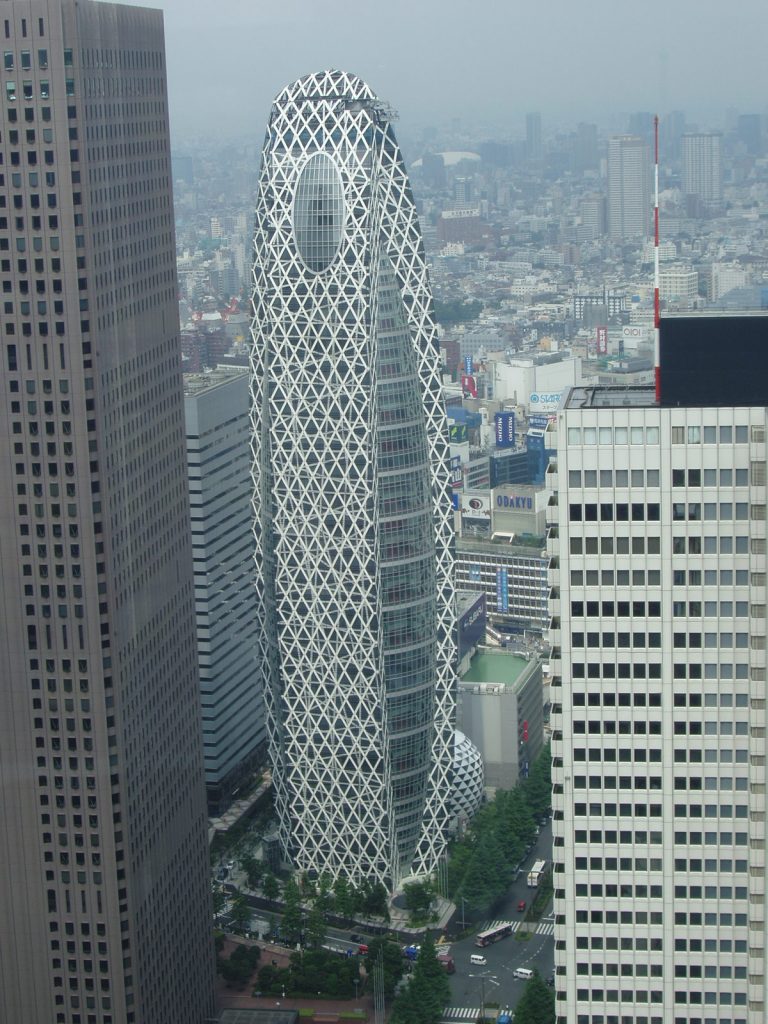 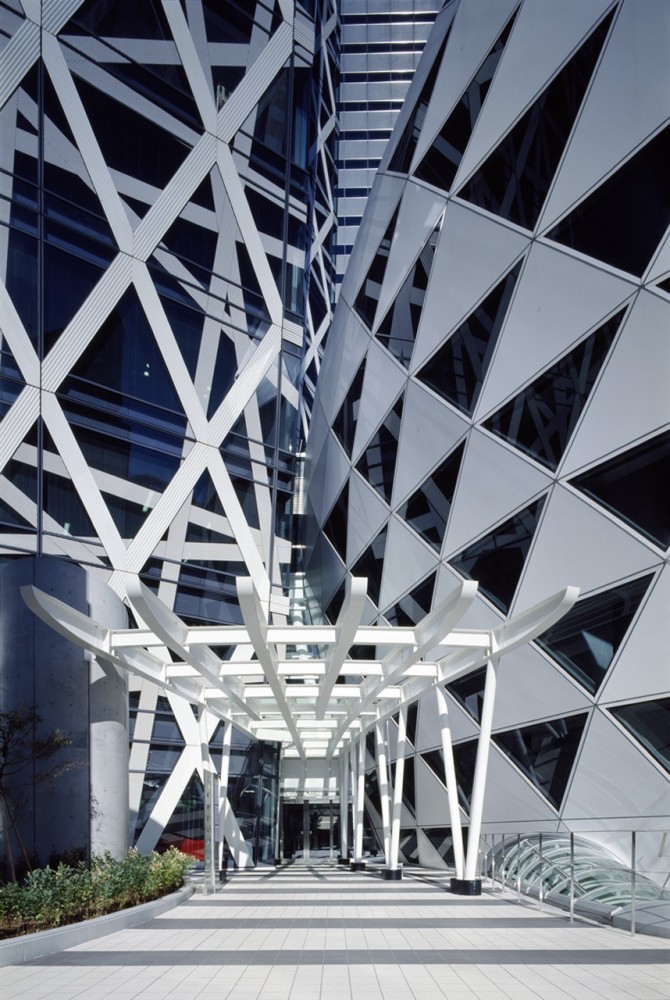 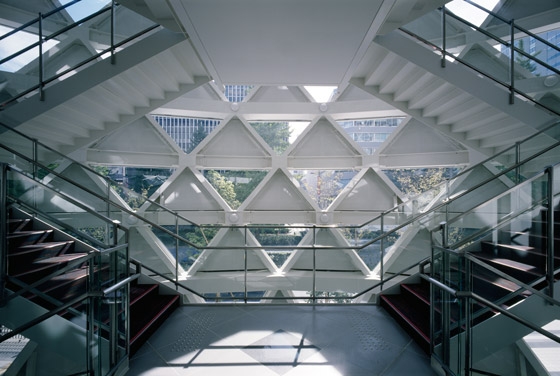 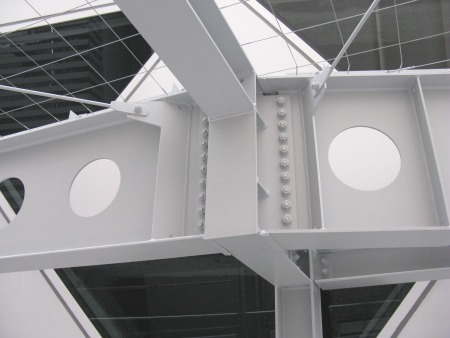 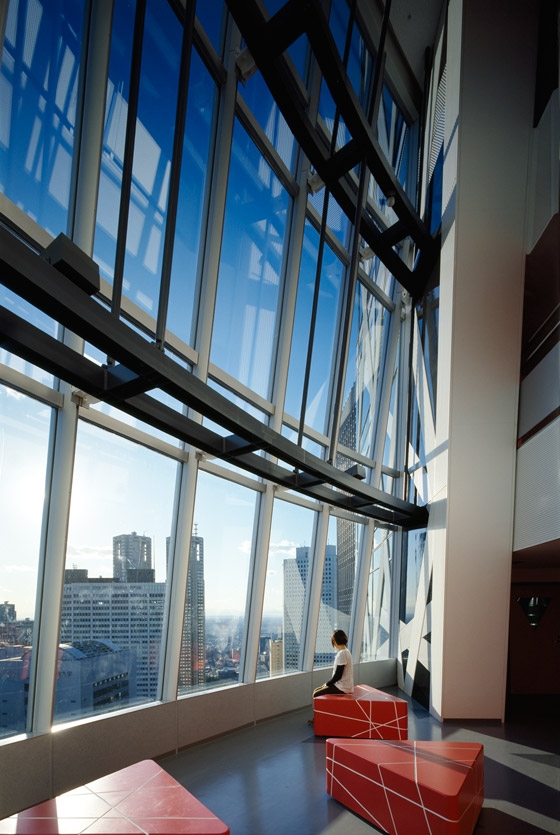 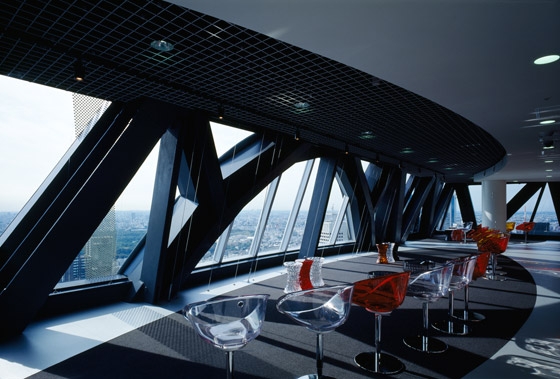 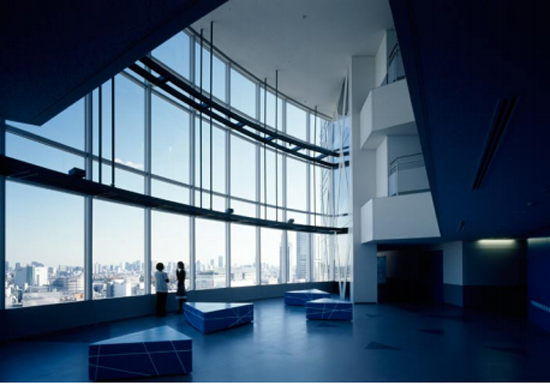 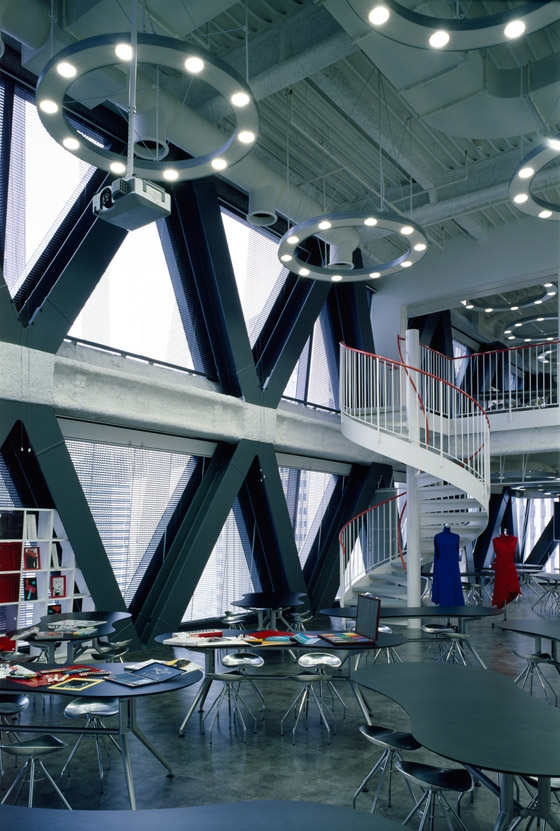 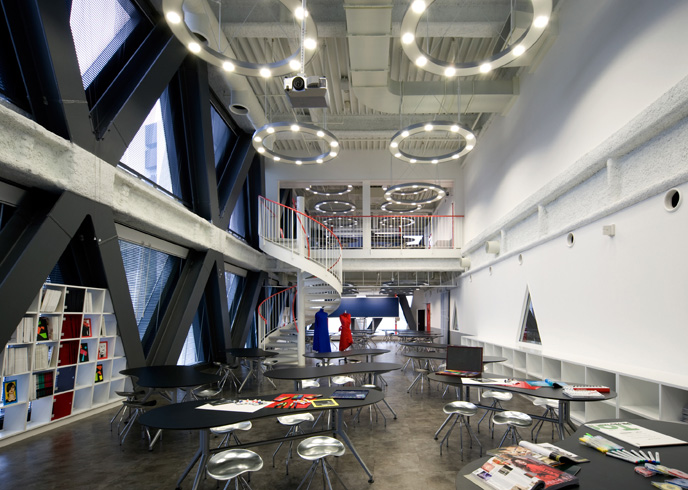 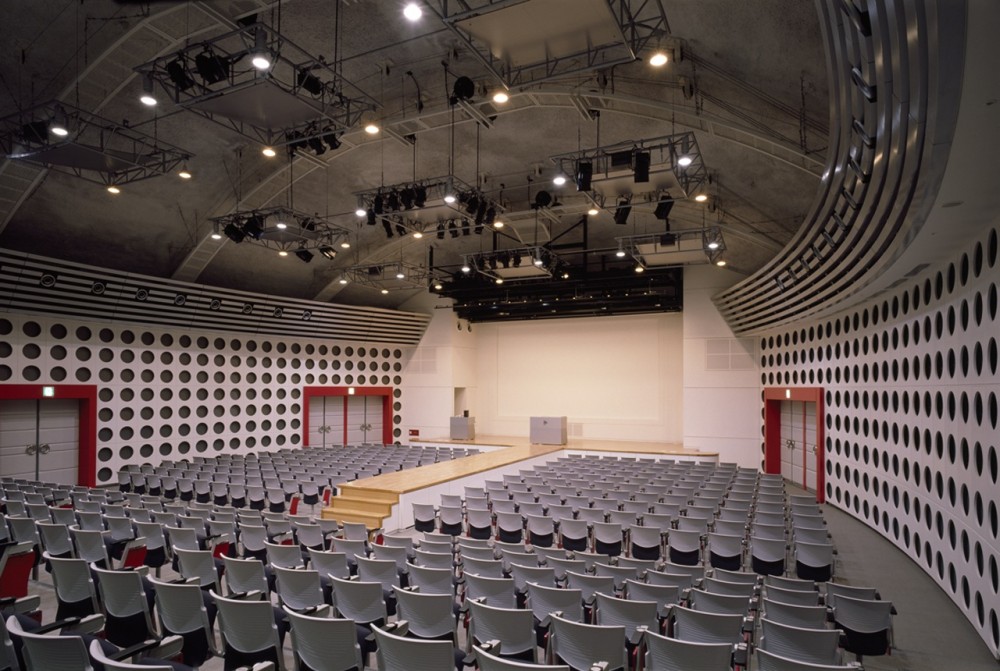 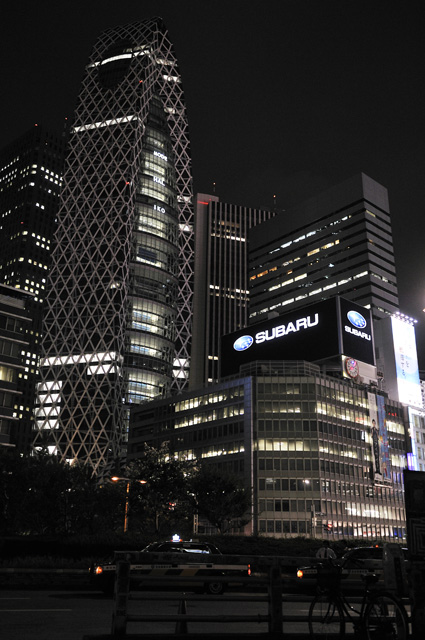