Ministry of Internal Affairs of Georgia

This building not only meets official duties, but was designed to become a landmark of the city of Tbilisi and Georgia in general.

The main building of 10570 meters square, was located in an area of 49652 m2. It was built in the center of the field and near the highway, thus leaving a large ceremonial plaza at the south side, placing in it a large pond (1000 m2) reflecting in the waters you can see the curved facade.

Located within a hole in the ground has two entries, the first on the front and which is accessed via a bridge, is reserved for the authorities and the second in the northern part of civilians. The south entrance bridge enters the building through a grass-covered slope.

The whole building is limited by a dip topped with a retaining wall which is accessed by stairs. In the north-east of this wall was located the main facade.

The movement of the building’s facade with its huge eaves, one of which covers the main entrance can be seen from the highway.

The building of the Ministry of Internal Affairs of Georgia was built near the Kakheti highway between Tbilisi International Airport and downtown.

All the open space around the ground floor of the building not only allows the entry of natural light and fresh air inside, but also creates a basis for the extraordinary volume consisting of steel and glass façade is superior.

The main building was designed with linear forms, in a block located within a three-dimensional facade of steel and glass.

Only the basement and ground floor were built with reinforced concrete upper floors and columns were made with a steel structural system.

In the northern part of the land was opened for visitors parking and a helipad.

Near the main entrance is the area occupied by machine 1164 meters square. Except for transformers and generators that were placed in a room of 148 square meters in the northeast of the plot, near the park. This room is hidden in the ground and covered with grass giving the appearance of a natural hill.

A service road is designed for ambulances, fire trucks and other vehicles in service in the west, south.

rectangular shapes in the building interior

With an opposite character to the facade, the interior block is rectangular, thus, on the ground floor interior volume was obtained, the atrium. This space is between the wall and the inner block, is 12 meters high, is used as a large circulation area, also placed a lobby to the auditorium, a cafeteria and a semi-covered office.

The interior block has two wings, left and right, with a large central bridge.

On the ground floor is an auditorium, the cafeteria kitchen and service stairs. The upper floors have been sealed with a glass facade soundproofing of the possible noise from the atrium and also highlight its rectangular lines.

It has three fire stairs, a lift for use VIP and handicapped accessible.

We used concrete in the stairs to the basement patio in the retaining wall surrounding the building and the ground outside. The concrete used in the inner facade was painted.

Both the facade of the courtyard buried like the top of the building are made of steel and glass. To create a whole unit used similar colors and patterns on the windows of the facades of the building.

The main facade consists of a steel frame profiles 200 × 400mm, like most of the internal structural system of steel profiles and secondary structure 150x150mm. Profiles were also used Ø60mm circular steel, PVC and aluminum profiles for some window areas such as border area of the exterior facade.

The facade is divided into three sections. The first is born at level 0, the second is the main facade and the third is the top of the front that connects to the roof slab, level 12.00. All sections of the facade have different angles and surfaces. The movement of these three variables in determining the characteristic facade of the building. At the same time, the facade is composed of 3567 triangular pieces of glass of which 1947 have different shapes and sizes.

Because natural ventilation is obtained within the atrium, as well as air-conditioning system, some modules of these triangles, both on the ground floor and the upper have been designed as windows that open synchronously by an automatic system.

The atrium was divided into four parts closed for five fire walls are made of steel and glass, to prevent, in case of fire, any leakage of smoke in different spaces of the building.

Ministry of Internal Affairs of Georgia 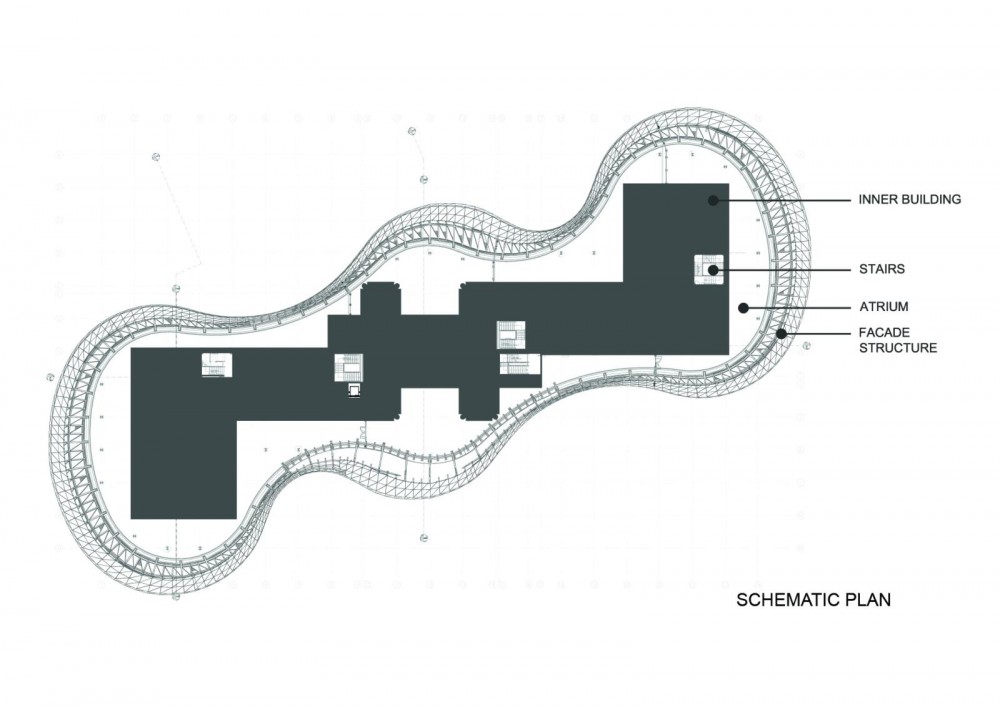 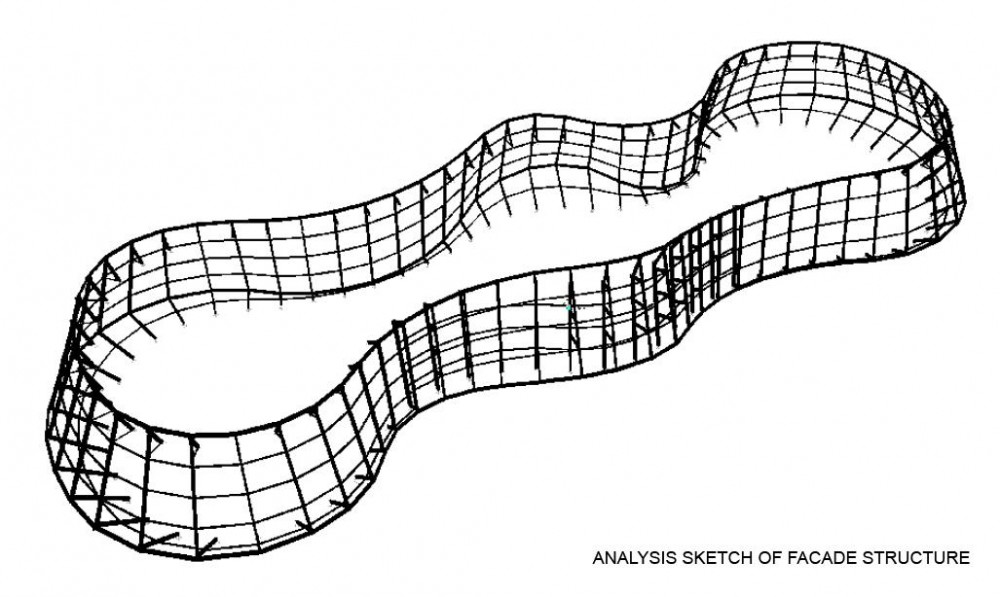 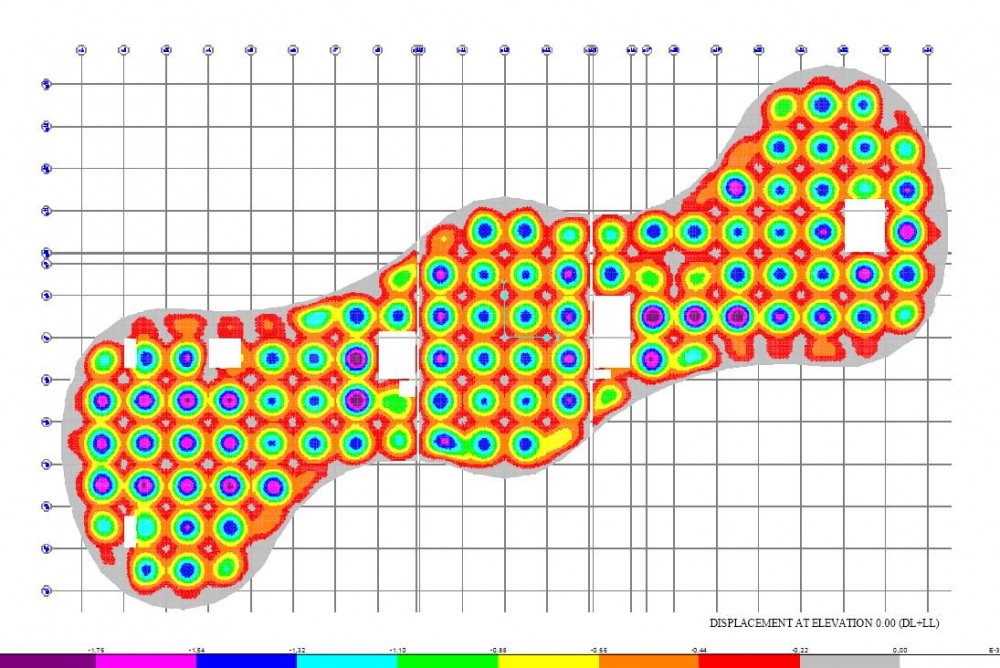 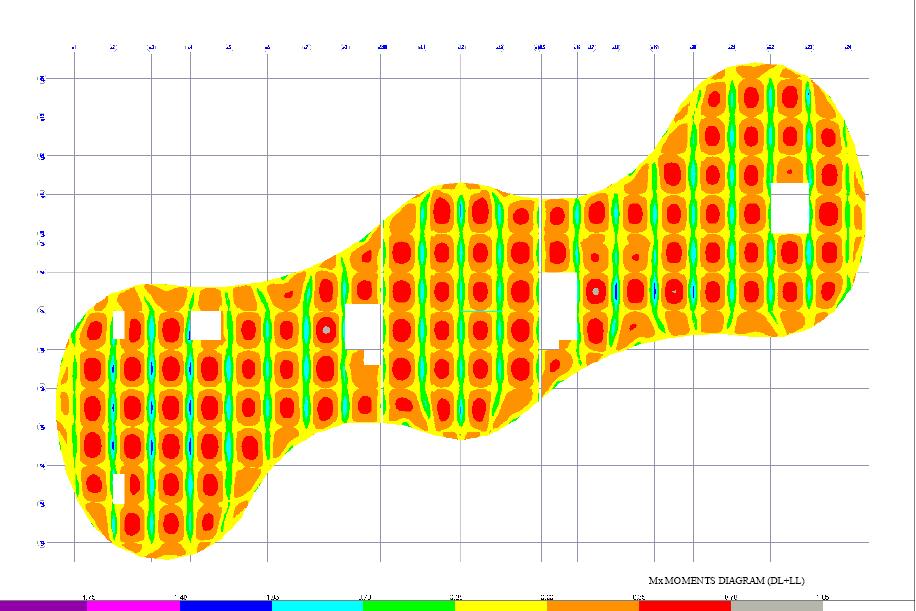 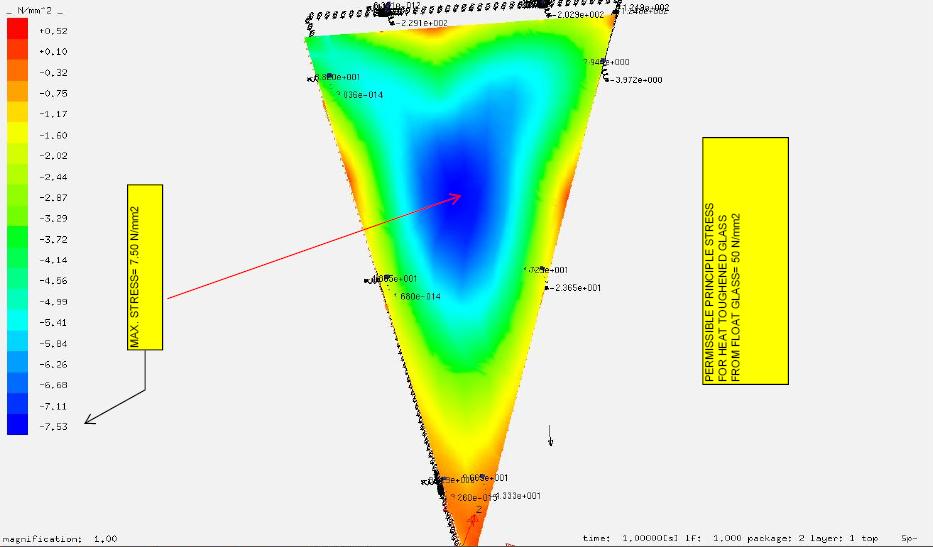 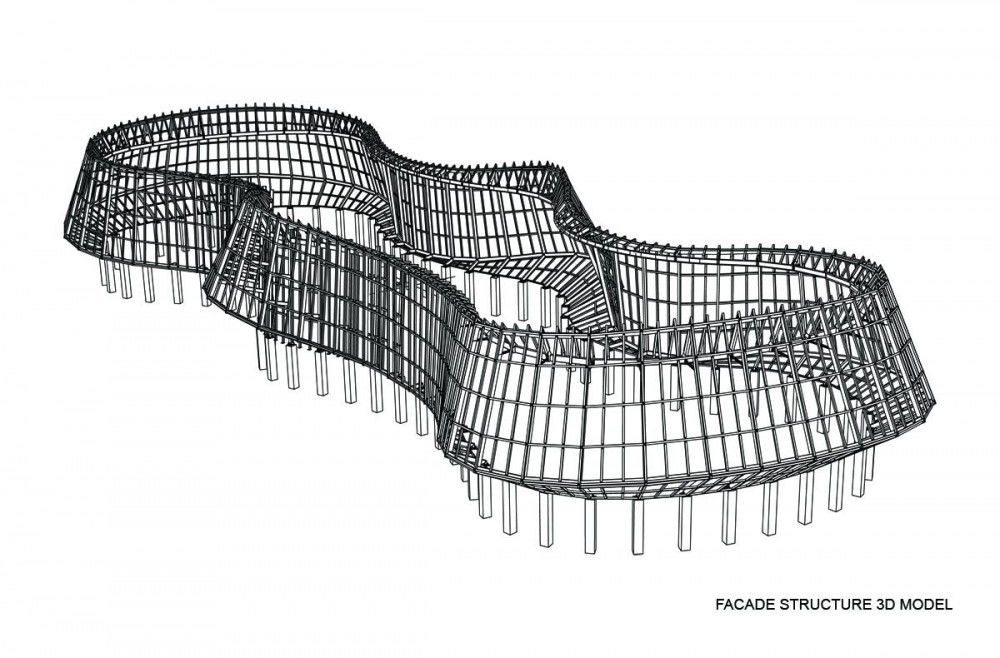 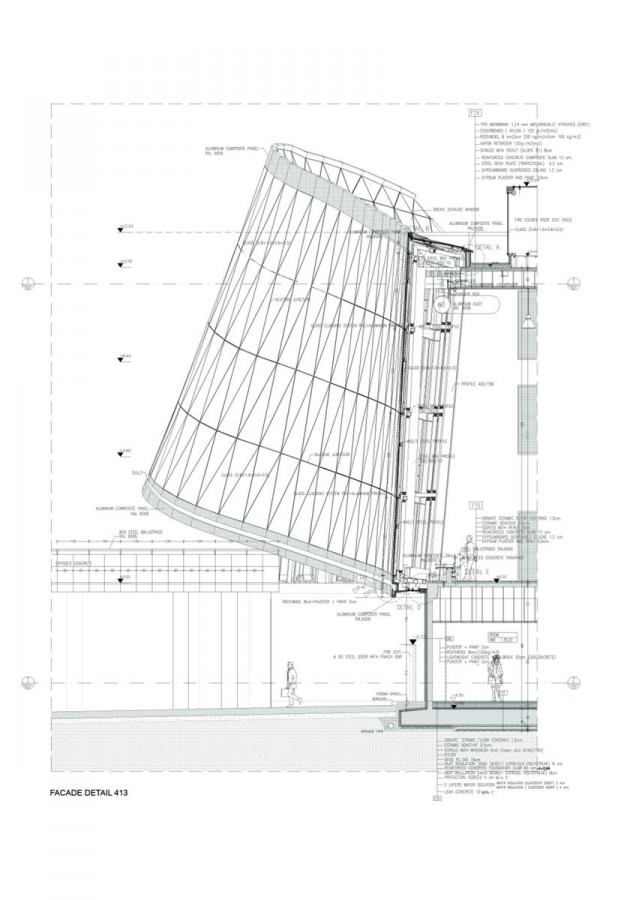 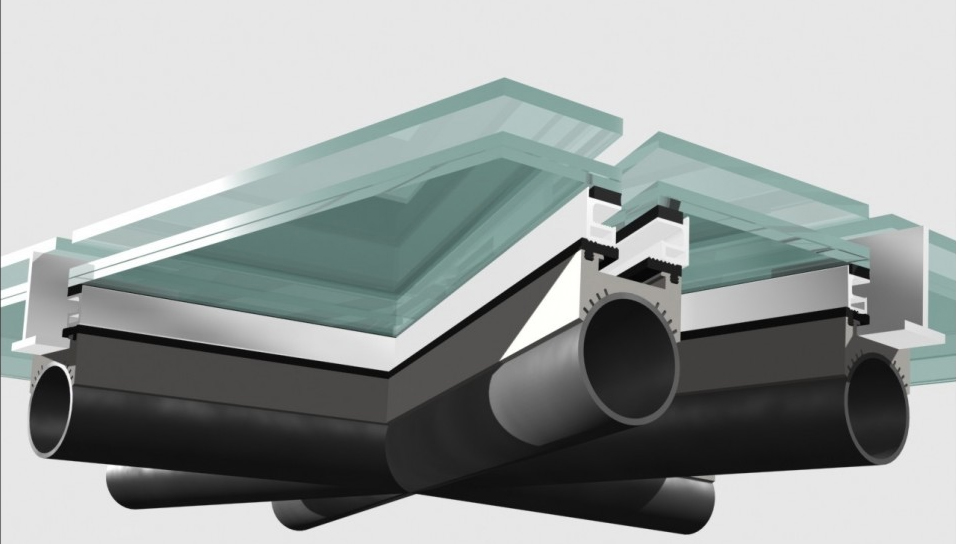 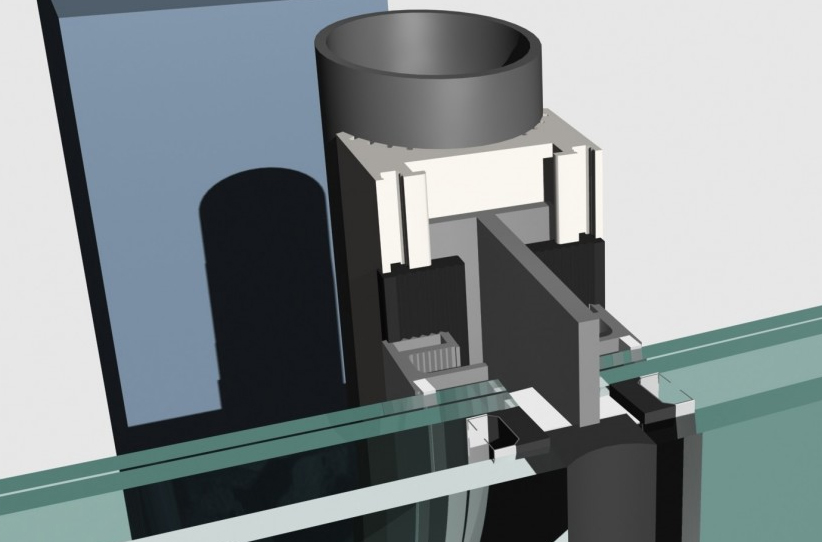 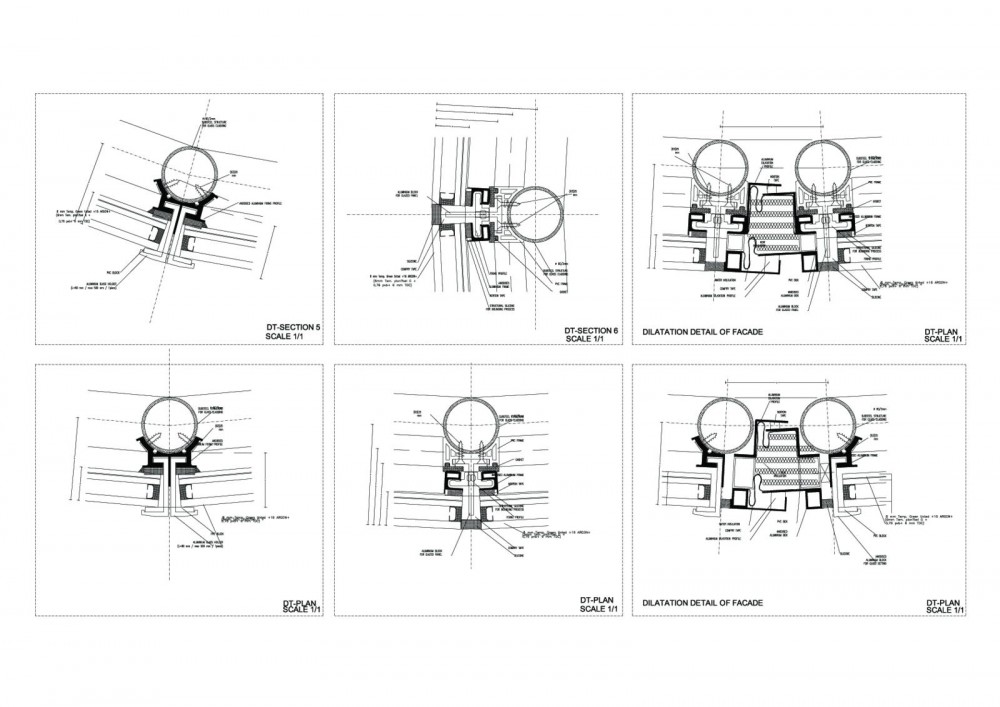 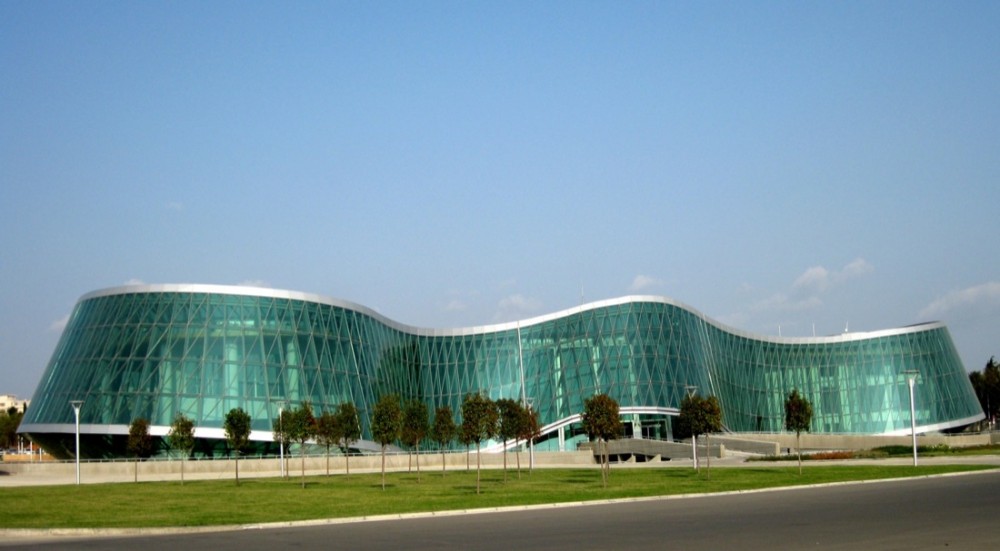 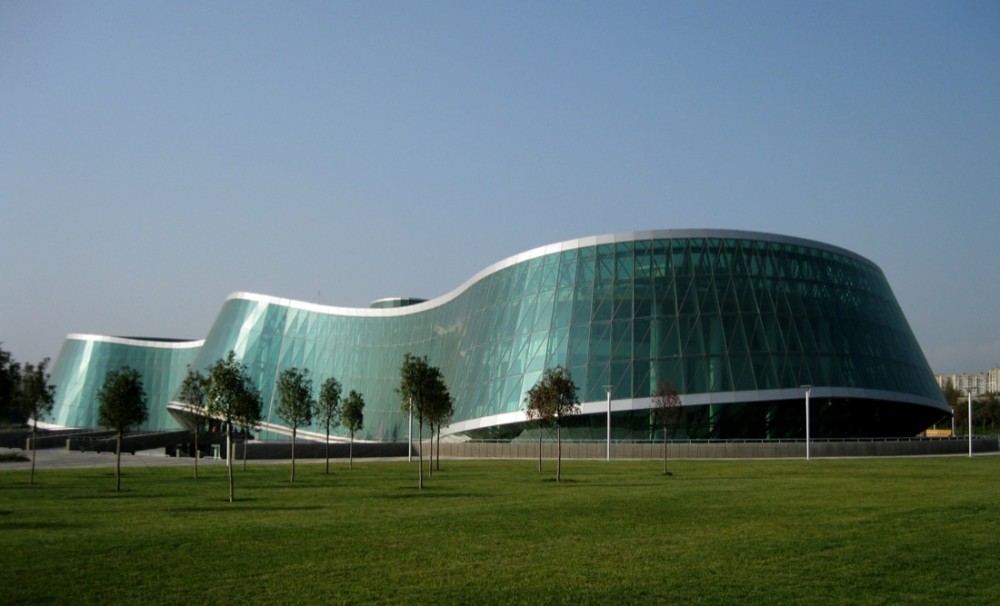 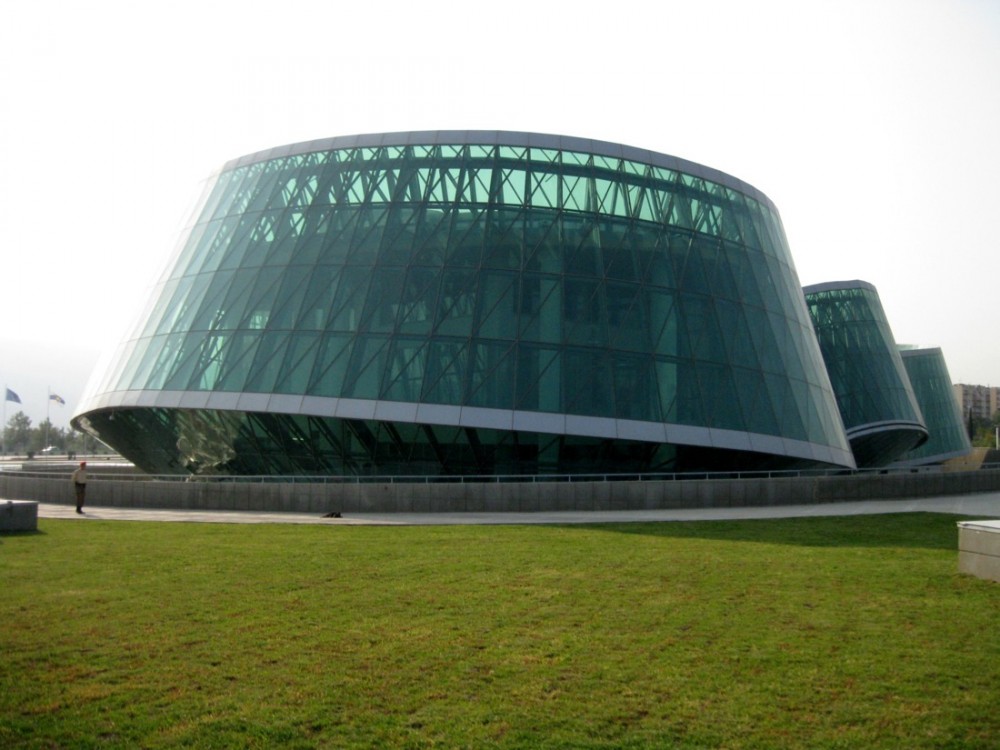 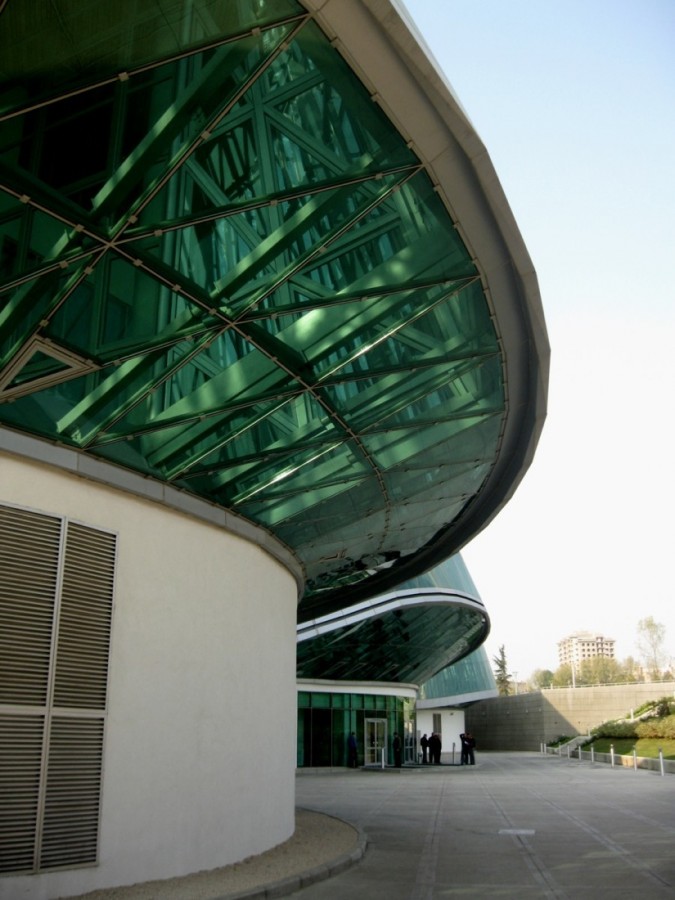 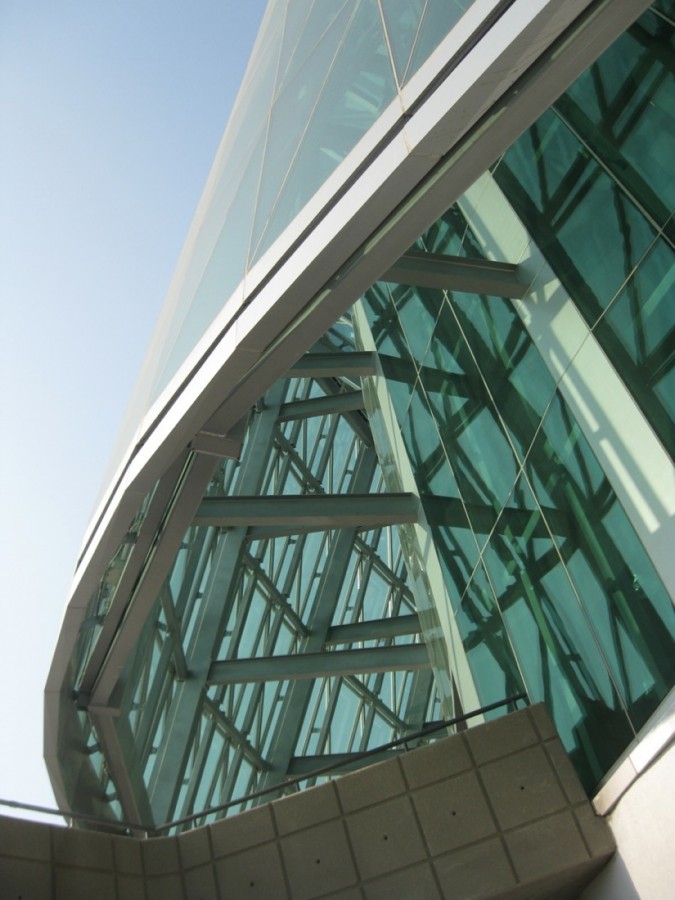 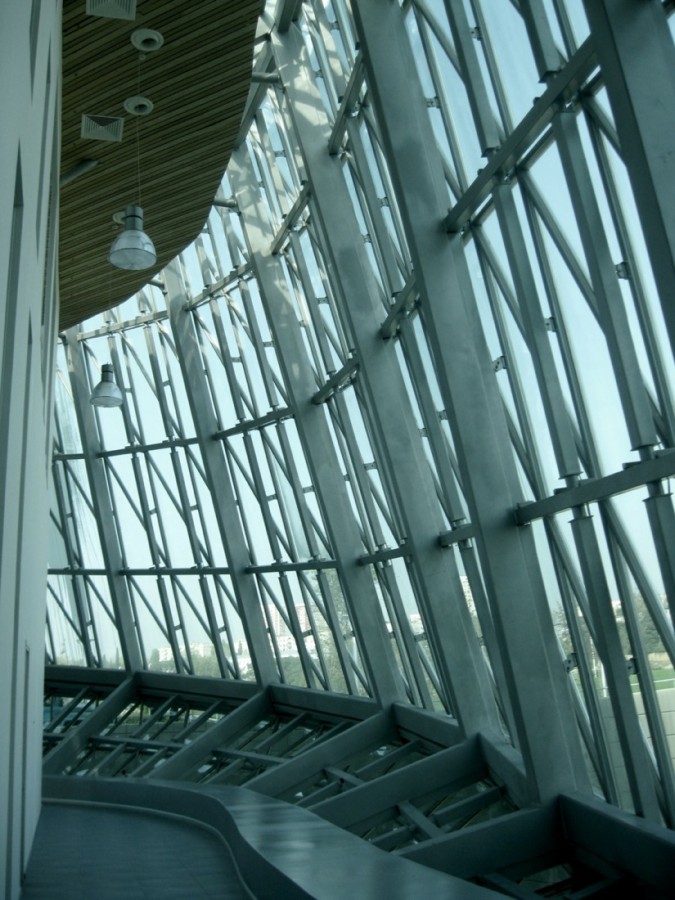 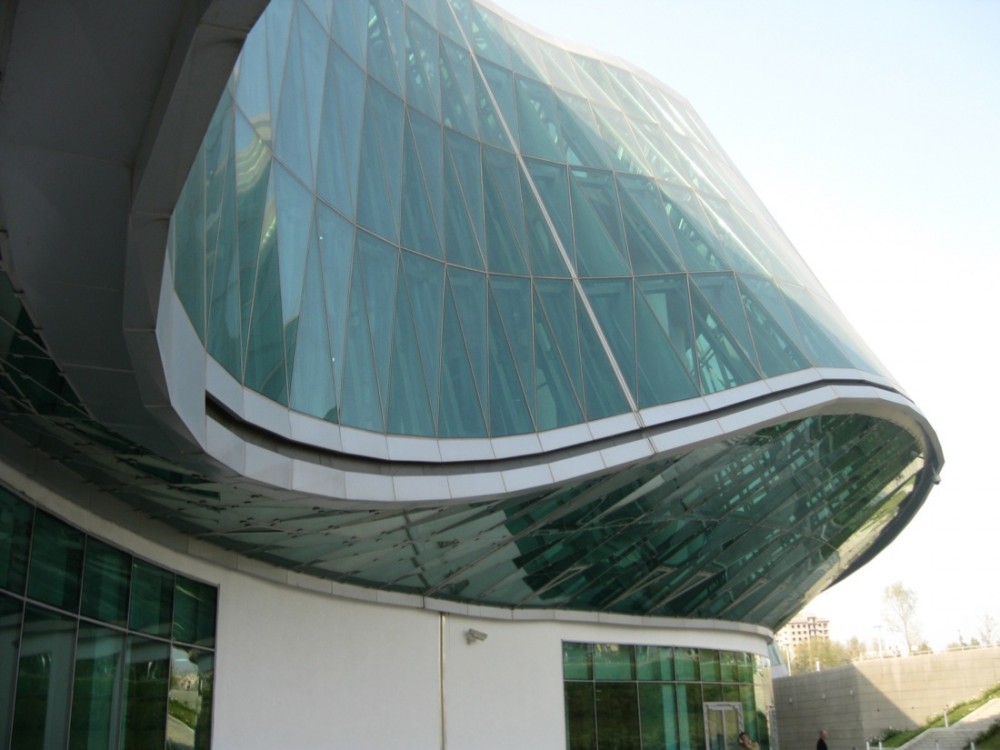 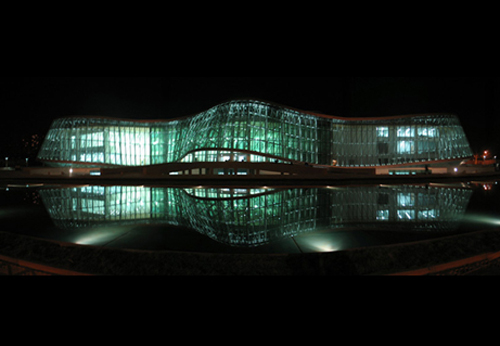 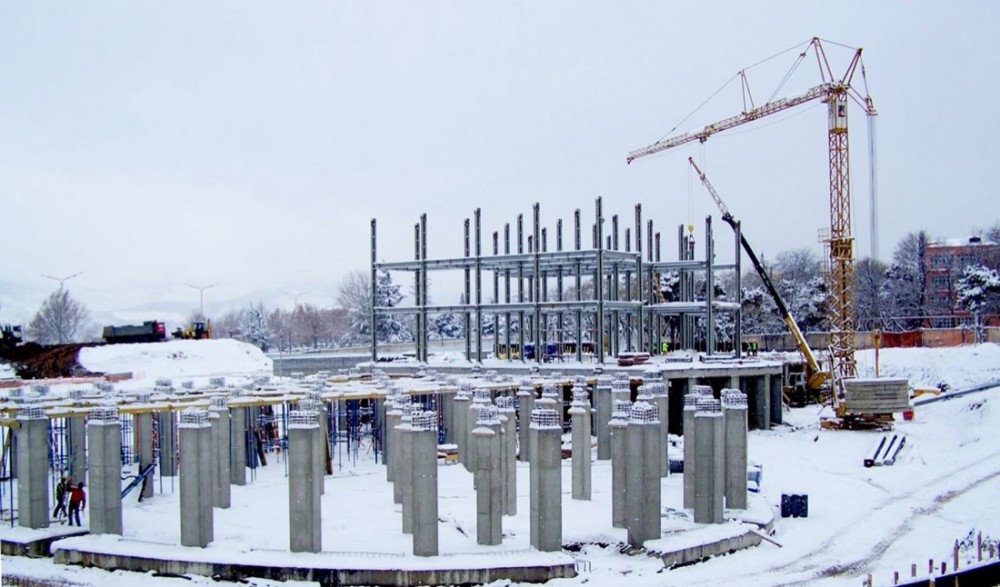 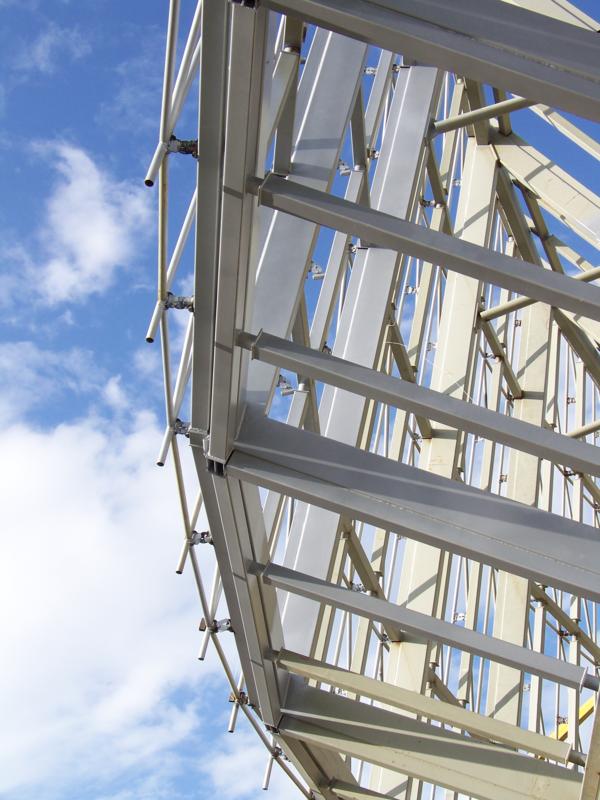 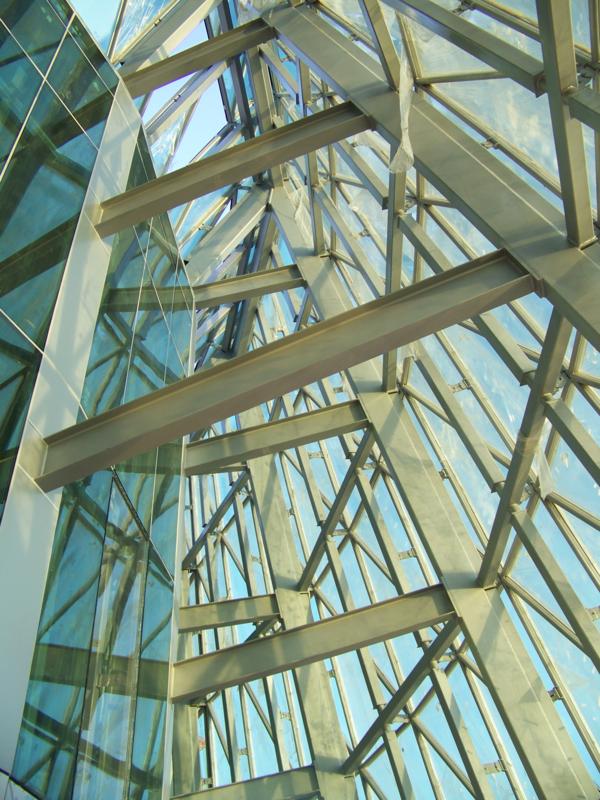 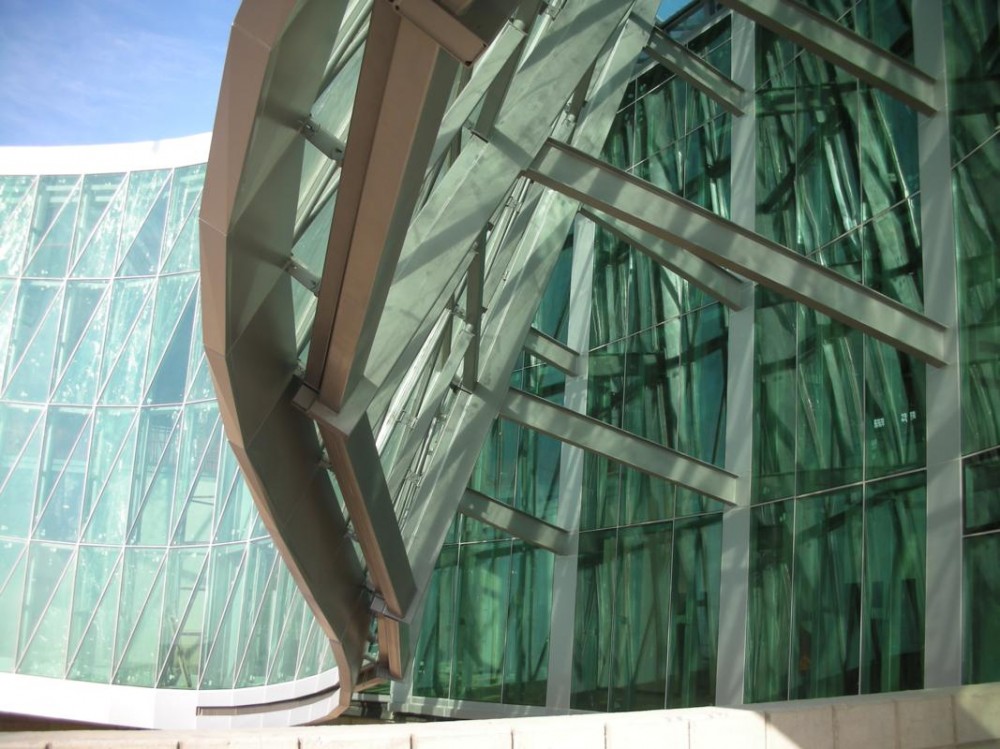 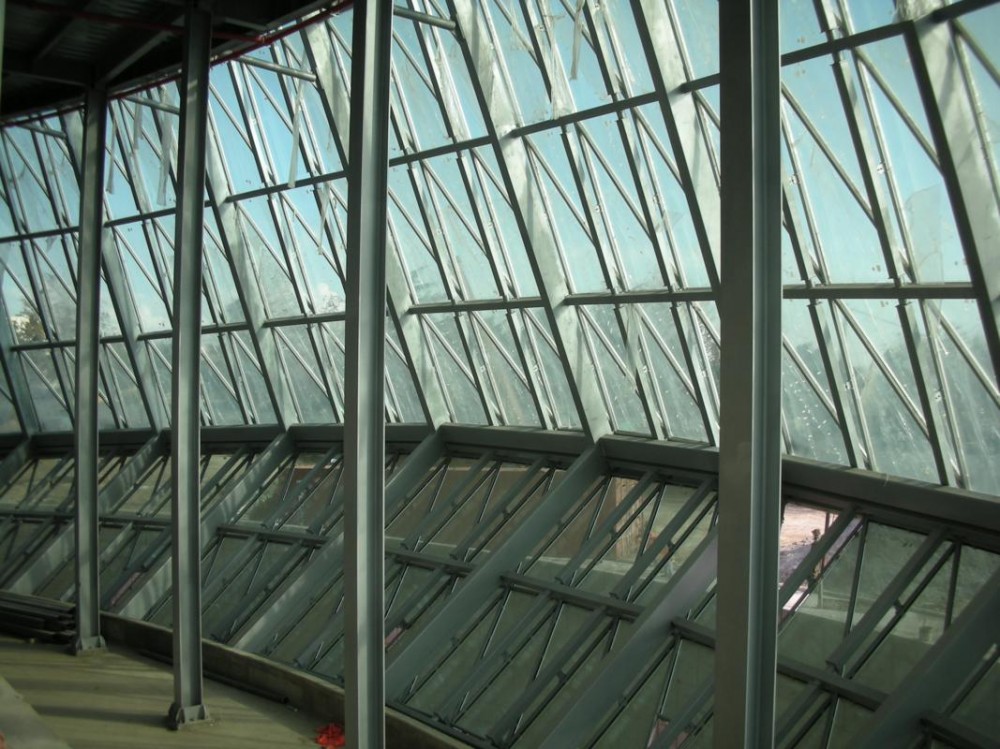 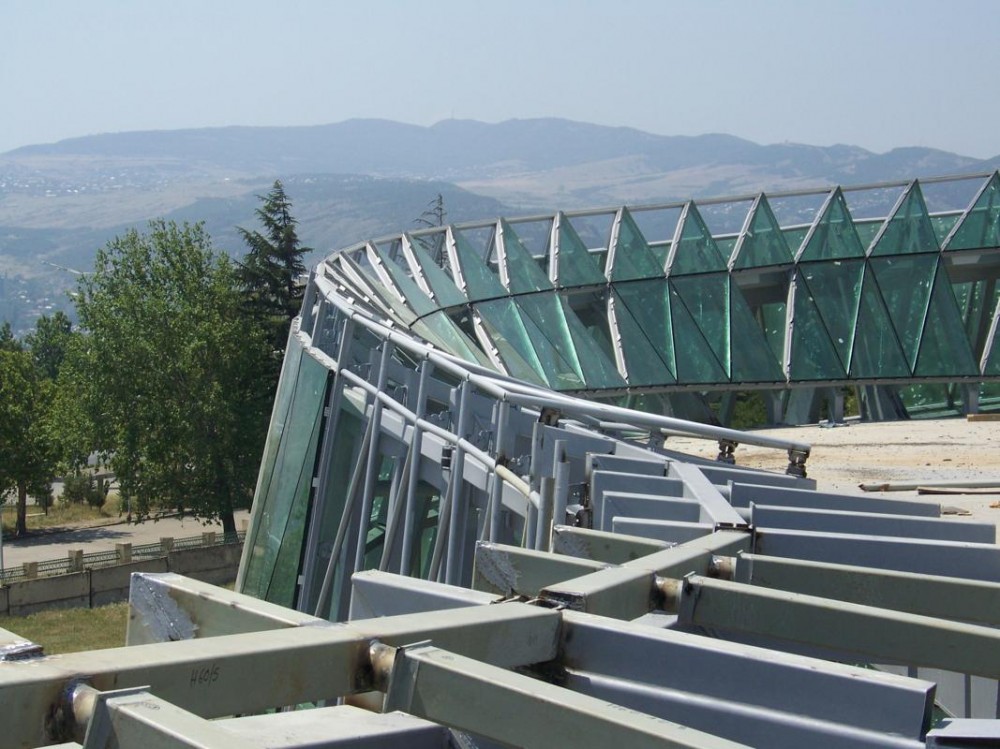 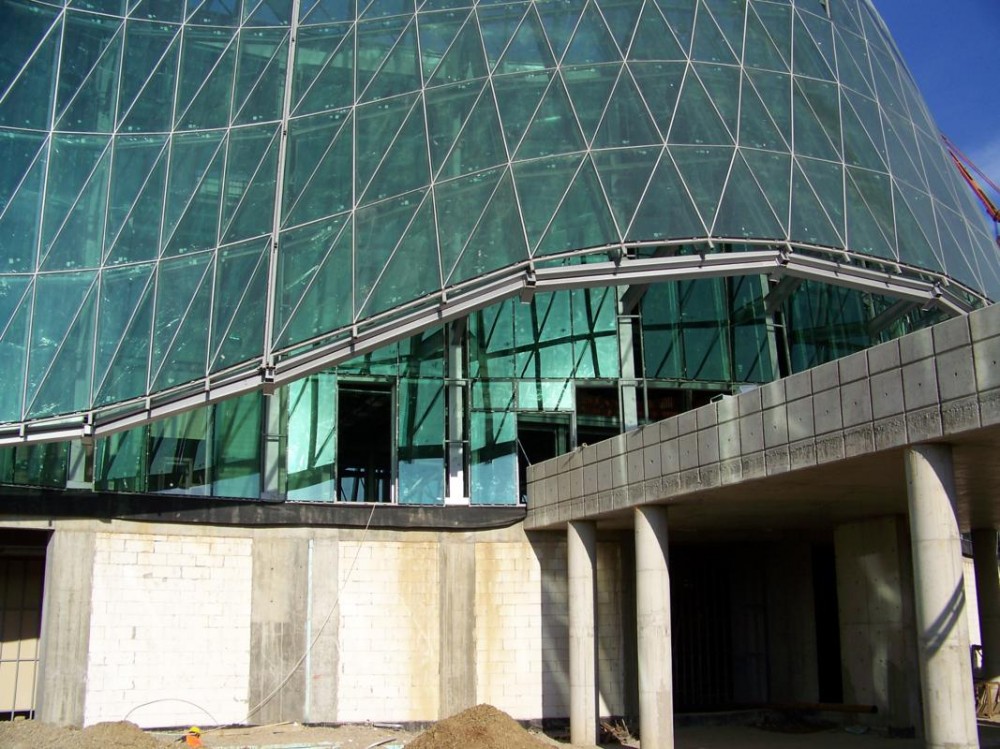 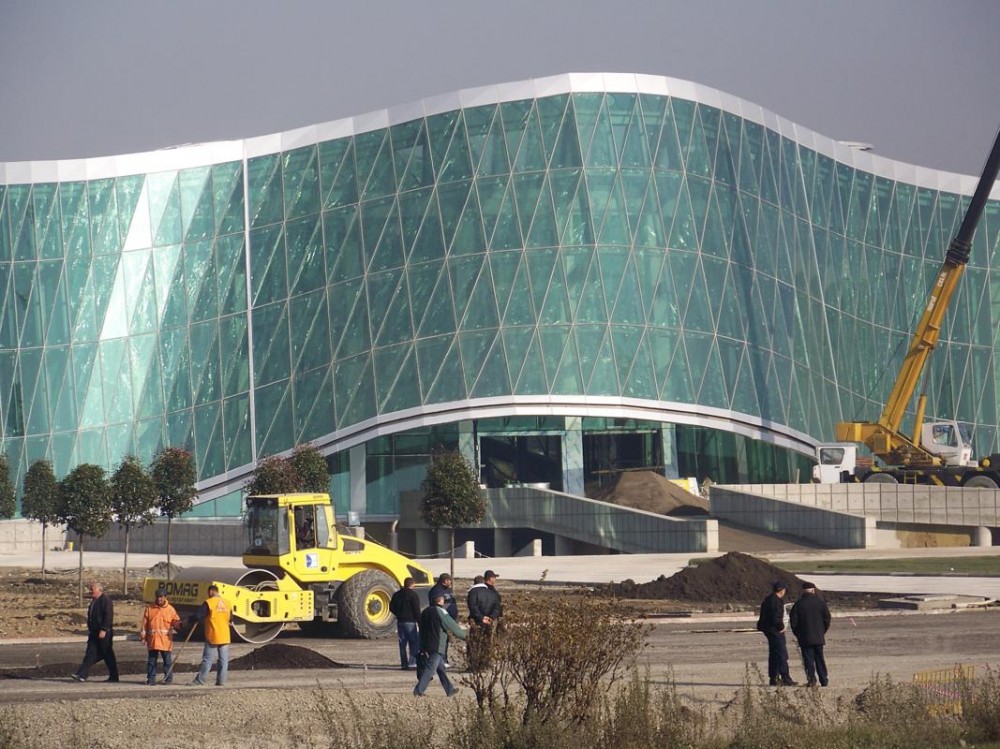