Milstsein Hall is the first building to be constructed after 100 years to the renowned College of Architecture, Art and Planning (AAP) Cornell University.

At present, the AAP is divided into four separate, different in architectural style and programmatic use buildings, but similar in type. Instead of creating a new autonomous building, Milstein Hall is an addition to the buildings of the AAP, forming a unified complex with continuous levels of interconnected spaces both indoors and outdoors. The active extra space a new master plan for facilities of the College, creating new spaces in its entirety internal programming.

Physically Milstein Hall is a connector between one site, under existing conditions and an innovative building, shaped and meterialidad of his time. Rem Koolhaas, who studied architecture at Cornell in the 70s, led the project with its partner in OMA Associate, Shohei Shigematsu.

The new building is located between the historic courtyard of Arts from Cornell and Cascacadas Creek Gorge, which define the northern entrance of the campus, in the city of Ithaca, on Lake Cayuga, New York State, USA.

The insertion of Milstein Hall between existing buildings AAP forms a new gateway to the north end of campus Cornell and transformed into a new corridor for the arts, planning and design.

“The top plate of the box was a direct response to the need for interaction involving the art field response, although we realize that this may not be perfectly achieved or designed by the architecture,” said Shigematsu. “Our aim for the top plate I was for it to serve as an educational platform for the departments of architecture, art and planning -. An open condition that could trigger interaction and discussion’m sure that students and teachers will generate unexpected uses and conditions that go beyond what we have planned for him. ”

A large horizontal plate rises from the ground and connected to the second levels of Sibley Hall and Rand Hall College, offering 2,323 square feet of studio space with panoramic views of the surroundings. Closed by a glass floor to ceiling supported by a system exposed beams zigzag and a green roof on the outside with 41 skylights, overhangs of this “top plate” are approximately 15 meters above University Avenue.

The southeast area is considered a unique space within the plant, as it is more visible from the pedestrian walkways below leading to Patio de las Artes, also drawing attention to the transparency of its walls views from East Avenue, which is approximately the same height as the plant studies. OMA took account of this southern exposure and a specific solution to moderate the requirements of daylight.

The outer skin of the upper floor responds with different materials to the demands of their position in the building.
The glass wall is a continuous band of 3.66 meters high, just framed in its upper and lower part with simple and fine marble Turkish bands that define the extension of the upper floor. The natural veining of the marble, vertically and black and gray color, enrich the outside with a specific scale and unique material, however, serves to unite the different buildings in this area of ​​campus, despite their different architectural styles.

The unique nature of the striations of marble, directly influenced the design of the identification of Milstein Hall building, located in the south eastern front overhang. The building name is recorded directly to the height of the marble panels in vertical banding while dissolve inside the stone.

The roof of Milstein Hall, 2415 square meters, is considered as another facade of the building, reinforcing the connector of the same concept. The entire roof, with the exception of the skylights, is vegetation in a graphical model of two types of sedum plantings. The sedum “points” that gradually increase the diameter as they approach the south, creating a landscape that is orderly and structured approach Arts Quad, and denser and less structured into the natural landscape of the North Gorges. Looking at it from the roof of the third floor of Sibley Hall, Rand Hall or laboratory Baker east, the green roof creates a varied and vivid scenery, much more attractive than a conventional roof while absorbs water, replacing the existing pipeline systems rainwater in neighboring buildings.

Under the slab composing the upper floor, a continuous perforated aluminum ceiling extends. Metal panels manufactured with a stamping machine for cars, define a scale that is perceptible both for those who pass under the overhang along the University Avenue, and pedestrians occupying the spaces below. Vernacular reference to the perforated metal New York, ceilings create an urban environment, together with the existing old facades Rand and Foundry Sibley.

Milstein Hall offers 4,366 additional square feet to the old school, adding a space for studios, a gallery, a living critique and an auditorium with 253 seats.

The two levels below ground cantilever are also glazed from floor to ceiling and are home to the largest number of program elements, including the auditorium with 253 seats and a dome that encloses 465 square feet of space dedicated to the critical circle. The materiality of the ground floor, built of exposed concrete, contrasts with glass top and steel.

Besides offering 465 square meters dedicated criticism of the various subjects of study, the dome has multiple functions, supports raked auditorium seats, becomes the stairs leading to the upper floor study and is the basis for artificial a series of outdoor seating.

The double height space on the lower level, created under the dome, is the center of Milstein Hall, a multipurpose space for students and teachers. The bridge links the main public entrance to the Milstein Hall auditorium downstairs. It extends over the free space dome columns, by integrating structural concrete armor with handrails. The bridge also doubles as a viewing balcony space for criticism of the dome.

The sunken garden is located on the west side of the Auditorium and the north side of the exhibition hall. It can be seen from inside these spaces, and also for pedestrians in the square above or from the sidewalk along the south side of University Avenue. It has been planted “sumac” trees in the area and local herbs. The tower encloses the stairs is covered with ivy and rises from this garden, connecting the underground parking level with the street and the Milstein Hall.

Milstein Hall provides the AAP its first reading auditorium and scale within their own facilities. The auditorium was designed to provide maximum flexibility and allow the realization of a multiplicity of programs and functions. It is divided into two halves of fixed seats in section raking of the dome and individual level seats. When the audience is not used at its maximum capacity of 300 people, the lower level can be used for critical studio and smaller meetings.

The glass auditorium offers a permeable border between academia and the public space. When privacy or blackout are required, a custom design drapery folds down from the balcony of the auditorium, in a continuous manner. The curtain is printed digitally with an expanded perspective Vredeman painter Hans de Vries.

This floor is entirely devoted to study spaces.

The upper floor provides a large flexible space for studies leading to an impromptu interaction between AAP programs. A variety of areas within the top plate, support physical and programmatic vision of the College and collaborative learning AAP Forum, flexible modules of study spaces for critical and consolidation or living rooms. Sixteen design studios use the wide open area of ​​the upper platform of Milstein.

The Forum AAP is created by a gallery dedicated to the exhibition and collaboration between the work of students and teachers, is located at the southern end of the top floor of the building.

The forum settings AAP reinforces the concept of this construction as a connector. The library located on the second floor of Sibley Hall has a direct connection with the Forum, expanding the use of this space, library service, with a meeting room and conference. By extending two beams, southern Forum overhangs, mark and create a covered entrance from the pedestrian access to the Arts Quad.

Connecting the three levels of Milstein Hall, a “vertical space in motion” (12’3 “x 6’4”) serves as elevator. It is large enough to allow the models take from the studios to the critical area of ​​the dome, also possible to place a chair and a reading lamp. Designed by OMA and manufactured by Global Tardif and Schindler, “Insert room” built from standard plywood panels, was fully assembled in the city of Quebec, dismantled and reassembled in Milstein Hall.

The large open area of ​​the top plate, structurally supported by a hybrid network of beams 1200 tons of steel is used to support both long overhangs. The design, led by Shohei Shigematsu, partner of OMA and Rem Koolhaas, encourages interaction and allows flexible use in time.
These hybrid exposed steel trusses were designed to balance the structural efficiency of the cantilever and maintain freedom of movement within the great open floor plan. The solution was obtained by optimizing the diagonal framing members, to correspond to the diagram of tension along the structure. The result was a hybrid framework in which the steel parts are read more diagonally high tension forces and gradually become vertical, when the tension forces diminish near the center of the plant.

A field of lights designed to measure chilled beams was carefully coordinated with structural and mechanical systems, where possible using hidden functional elements to define the ceiling plane

The dome is a double layer of concrete. The bottom is exposed concrete slab on site, whose structure includes the main space under the dome. It was built with two layers of 3/8 “plywood, with a finish coat 3/8” MDO board I poured in a single 12 hour period.

The light bands were shaped at the top, along with electrical and sprinkler systems, forming a clearly defined central space outside the complex construction process. Above the structural concrete slab form a dome rounded outer surface, creating the floor of one of the inclined sides of the auditorium.

The materials and finishes of Milstein Hall, are an expression of its construction, robust and economical. At the top level predominates exposed steel and glass from floor to ceiling. At the bottom, the concrete. Both create two rooms with different expressive materials in its structure and form.

The efficient mechanical systems and abundance of natural light are possible by the use of high performance drives insulating glass coated low emissivity (low-E) on all exterior walls. The building expects to receive a LEED Silver certification with the possibility of achieving Gold.

The heat is distributed through the concrete slab with radiant heating.

OMA contacted Petra Blaisse and his company, Inside Outside, to order the design of a special curtain to the prominent corner of the building, the facade northeast. The aim was to preserve the views from the studios to the Arts Quad, maintain the natural light without glare, and present a striking image to this entry northeast. Inside Outside The concept for the design of the curtain, together with the curtain design made for the auditorium was based on Dutch architectural drawings.

The facades are made of glass, with thin bands of Turkish marble in black and gray. The vertical orientation of the veins of marble was significant in achieving continuous horizontal bands of stone, with which the cantilevers and the floating nature of the top floor is emphasized.

The level below the upper roof is covered with perforated aluminum regillas. Above the grids, and in specific areas, such as near the road, blankets acoustic panels were placed to absorb the noise of passing vehicles. These plates Auditorium were also placed to improve acoustics and indoor space to reduce noise transmission to adjacent offices and classrooms. 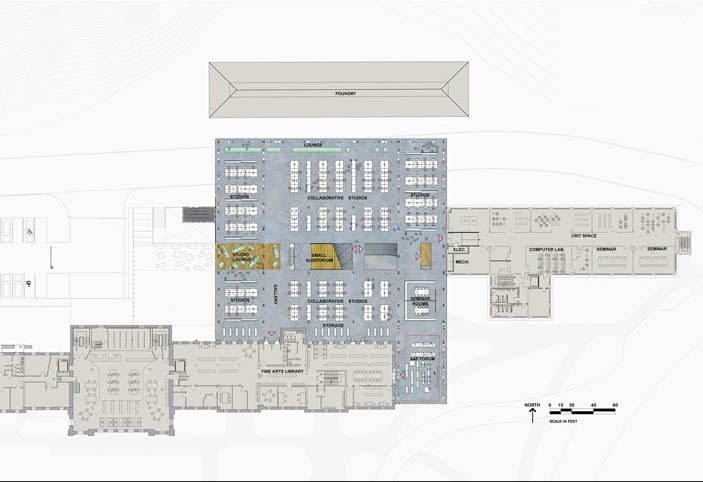 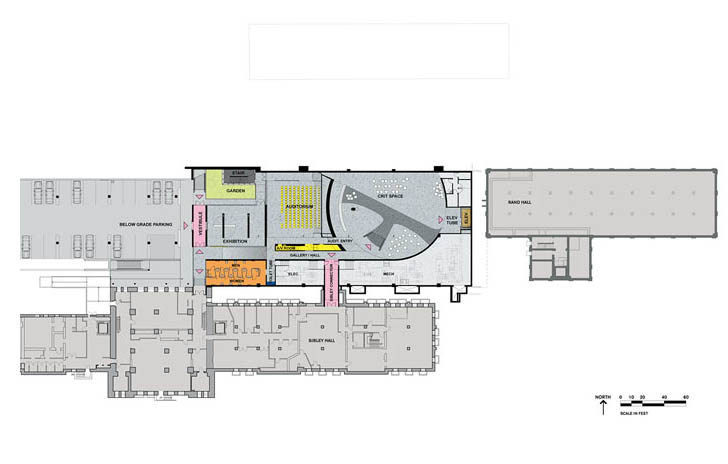 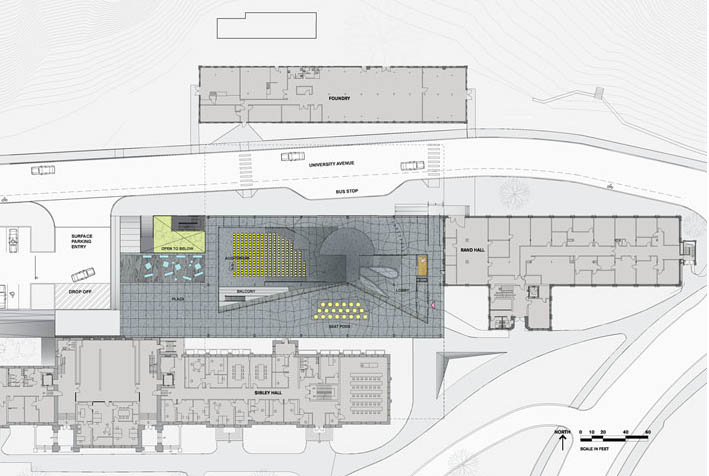 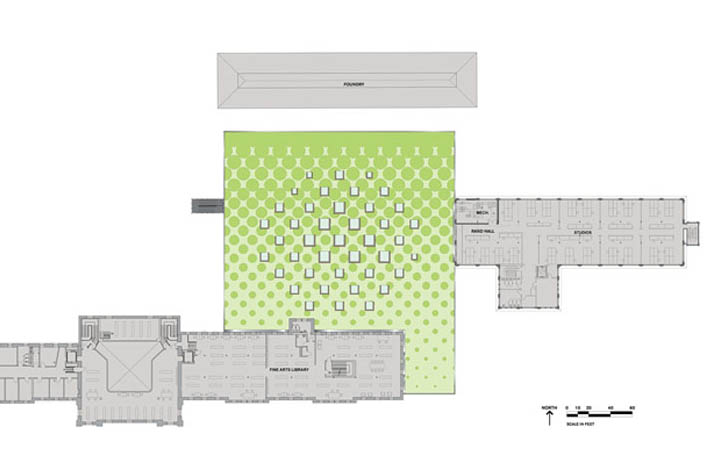 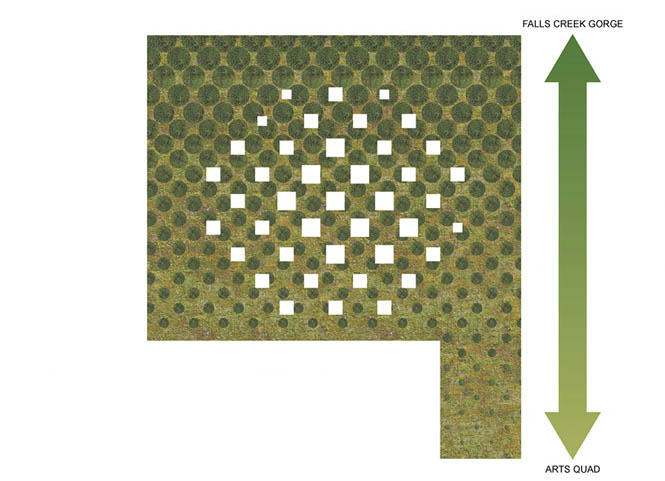 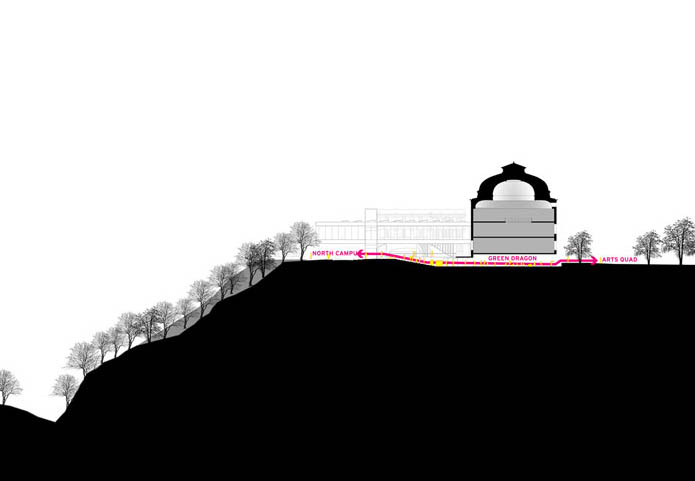 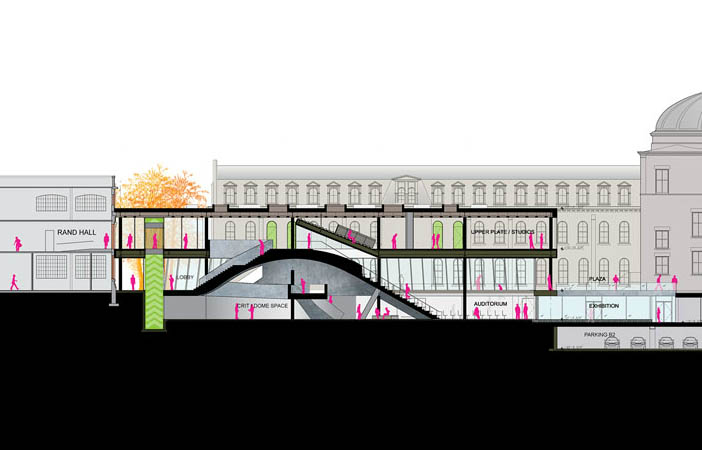 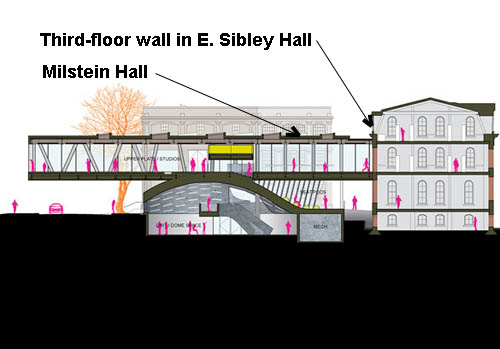 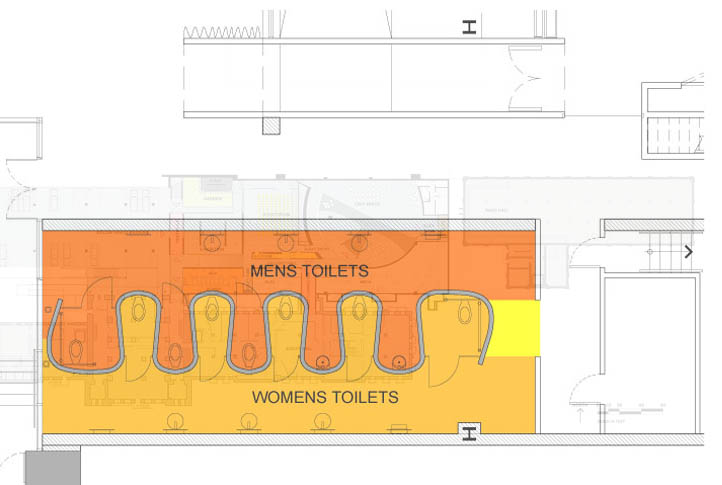 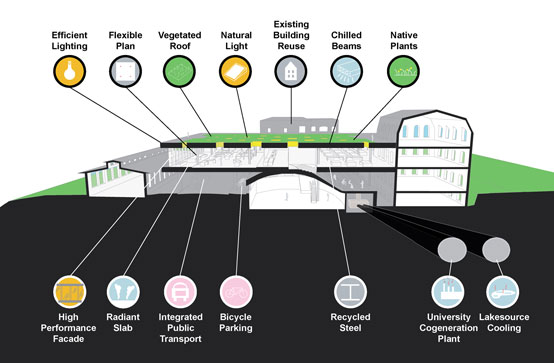 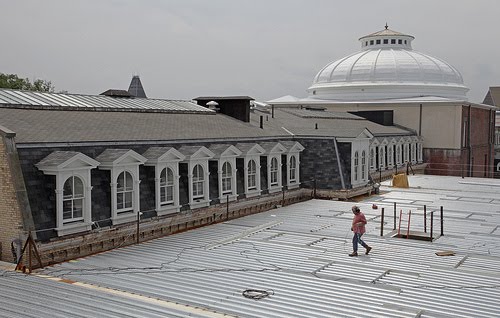 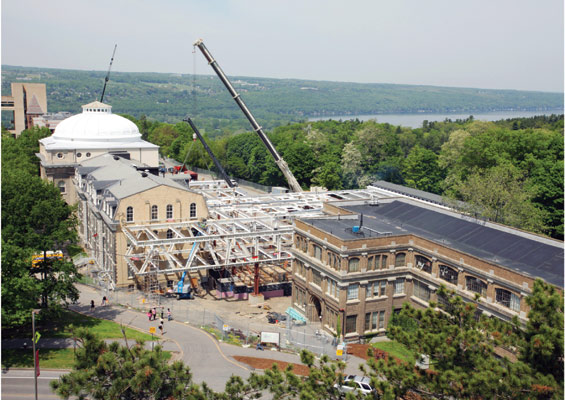 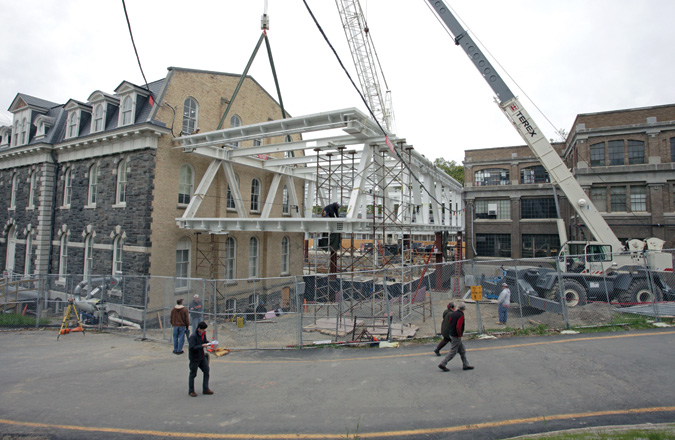 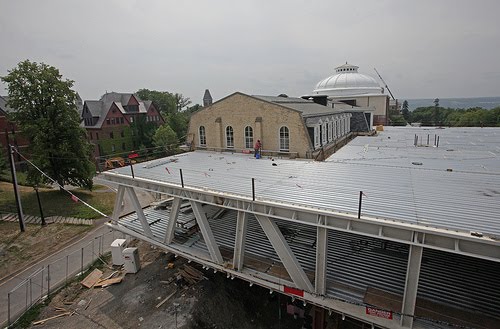 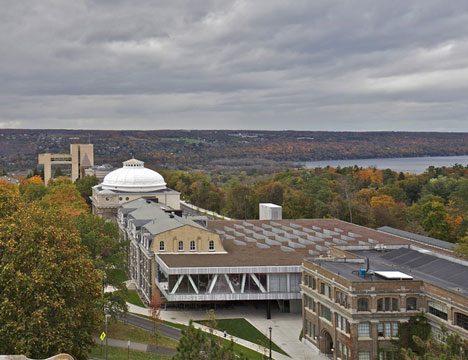 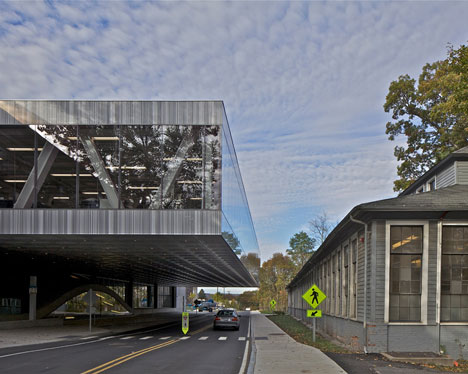 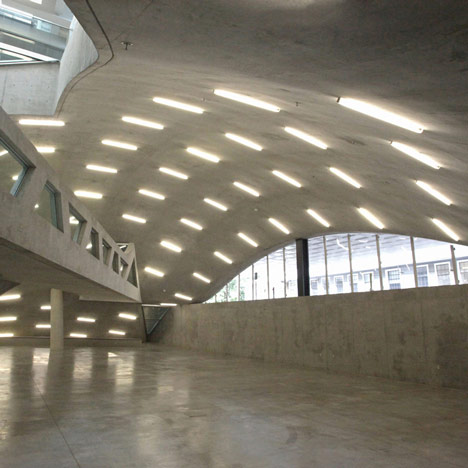 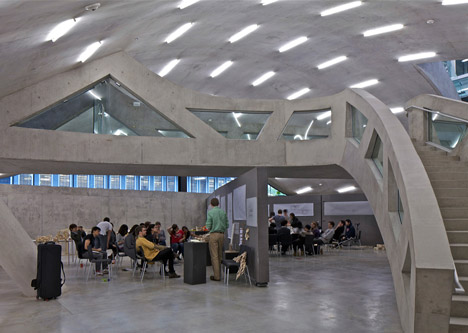 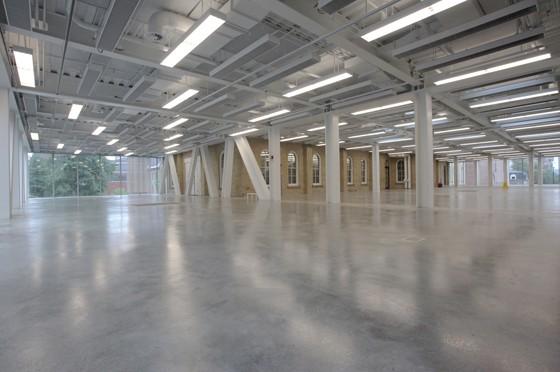 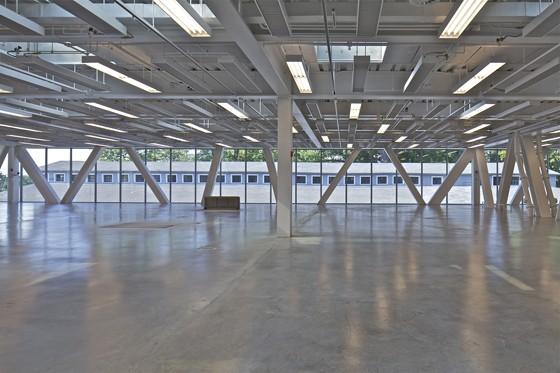 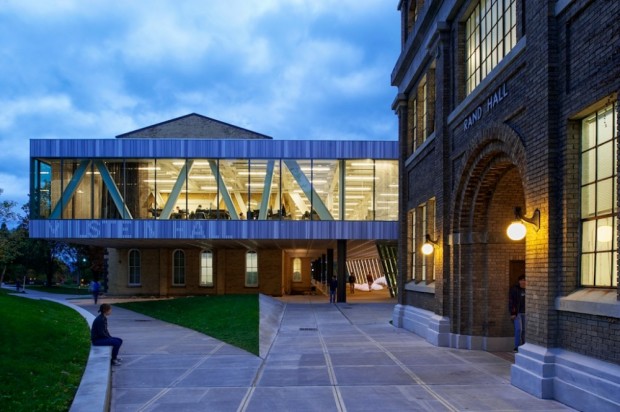 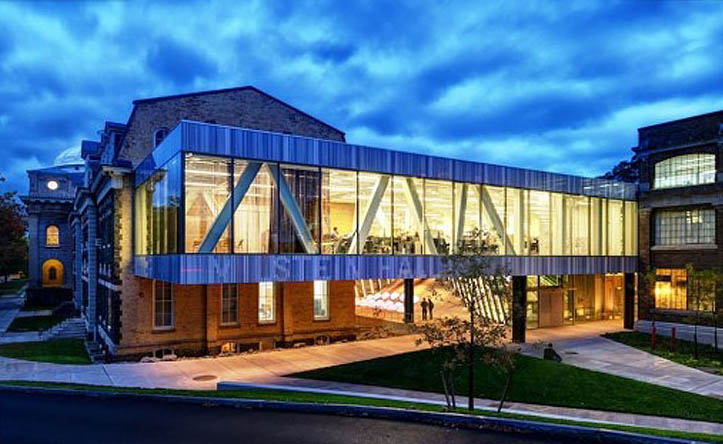 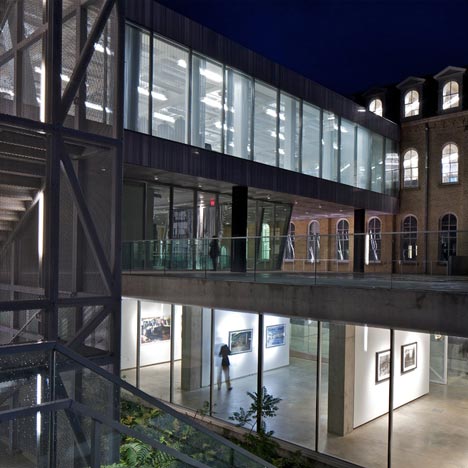 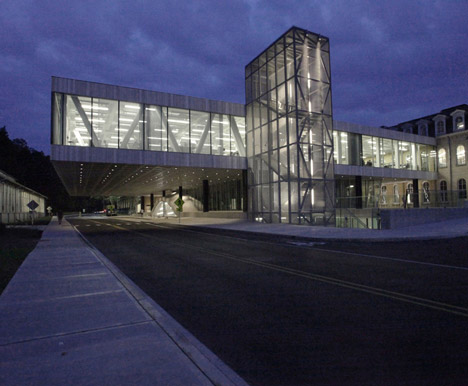