Big events, Olympic Games, World Championships, Congresses or as in the case of Zaragoza, international fairs, often leave evidence of their passage with a legacy of buildings for use by citizens, such as stadiums, hotels, infrastructure or as in this case, a leisure space, a water park. In some cases, these structures are dropped into obscurity and neglect.

In the Rivergate, near the International Exhibition Site, lies the Water Park. With an approximate area of 120 hectares, is a new urban park concept, which combines large green areas, services and activities for all citizens.

The winner of the competition to design the water park was a multidisciplinary team led by architects Iñaki Alday (architect), Margarita Jover (architect) and Christine Dalnoky (landscape).

The Metropolitan Water Park was awarded the Luis Buñuel FAD Award in the category of Landscape and City “, to be assessed by the jury as” paradigm “of the new attitude of man with nature, while providing a” new relationship the city with the landscape and the environment. ”

On the floodplain of Rivergate is located 2.5 kilometers northwest of the historic center of the capital of Aragon, Zaragoza, and the left bank of the river Ebro was rehabilitated public recreation area.

The place of approximately 150 hectares of rural land was traditionally used as a garden and also houses an interesting or riparian forest grove.

The main objective is to reaffirm the bonds of the city and its territory, maintaining the natural environments in the meander. The activities are power in the play, equipment and services, with a clear predominance of water.

The architects have relied on the tracks of the work of farmers for centuries, allowing the floor to express their qualities instead of organizing a track field brutal. Do not believe the scenery is drawn, but must be able to express the area’s history and his relationship with his people

The park has numerous leisure and adapted spaces for bikes, circuit for athletes with wide open spaces for public use.

The building is 798.95 meters square with public events for the City of Zaragoza, as well as civil weddings. It has two rooms of about 60 to 90 people each, as well as offices and offices for staff and / or council members.

With a stage 30 feet wide by 20 fund and a height of 17 meters away, can accommodate 7000 people standing on the track and sit in the stands.

Building is located next to the Header, moving the water coming into the blade that runs through the Ranillas Boulevard. The interest of this artistic intervention lies in the encounter of the river with a hydraulic element of archeology, still live in Hama (Syria).

The wheel diameter of 16.5 meters has been built by the craftsmen themselves Syrians who treasure this knowledge millennium.

Three and Zaragoza during the hot summer to swim or play in their water sources. They can find several places selling refreshments and drinks.

It is a construction of 1,200 m2 which purifies the water and sends it to the channel, through a cascade that reaches the water layer Ranillas Boulevard. It’s building services, maintenance and also meets the needs of workers responsible for maintaining the park.

The River Aquarium was one of three theme pavilions at Expo Zaragoza 2008, along the Bridge Pavilion and Water Tower. Its size of 3,400 square meters, making it the freshwater aquarium largest in Europe.

The building consists of two separate areas, the base and the tower:

The base will consist of three floors, two buried and one on the ground. With an area of 3200 m2, accommodates elements related to rain, water curtain, fountains, etc.

The tower stands on the top floor bar with an area of 720 m2 which serves as a lookout.

Structure of the Tower

The core of the Water Tower is composed of concrete columns supporting the building elements and bear stairs and elevators. This central core embraces a showroom pendant.

With an area of 7,000 m2 and a height varying between 15-30 s meters and a width of between 8 and 30 meters houses the exhibition “Water, Unique Resource” dedicated to best practices in water management.

In the park you can also find places to play golf or play Pitch & Putt, a multisport circuit, a spa, children’s theater, a spa center, several restaurants and a cable car overlooking the river and the city.

The maintenance of the park is built around a closed hydraulic system and integral part of the recovery of water from the Ebro River, its purification and treatment before being used in bathing or watering and finally returned to the river once filtered organically and naturally.

The plant masses in many areas are indigenous, only maintenance required for cleaning and conditioning, as well as the travel paths.

Due to the nature of the park, most of the materials come from nature itself. The vegetation and water are essential elements that facilitate its use and enjoyment.

Emphasizes the vision of the meander as a “silver forest” formed by more than 40,000 shrubs, 25,000 trees, amongst which are poplar, aspen, ash and willows, and Great Plains, the largest park in the capital of Aragon.

They are three, one pebble, one grass and one third of white sand on the palm trees that stand.

In its construction, steel and concrete was used gray and white. 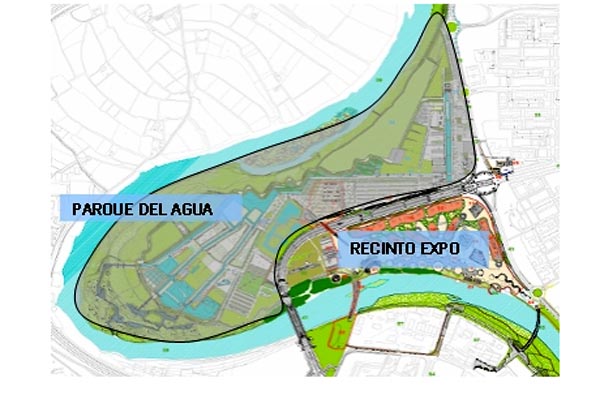 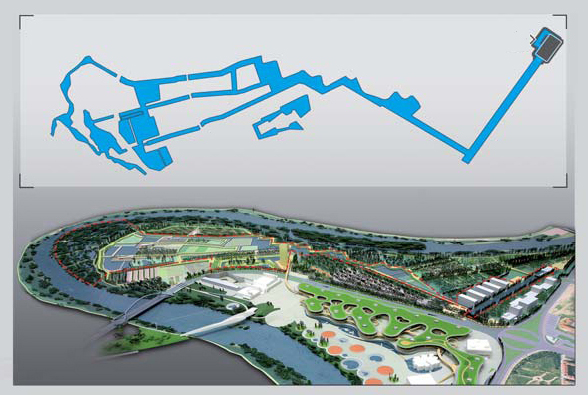 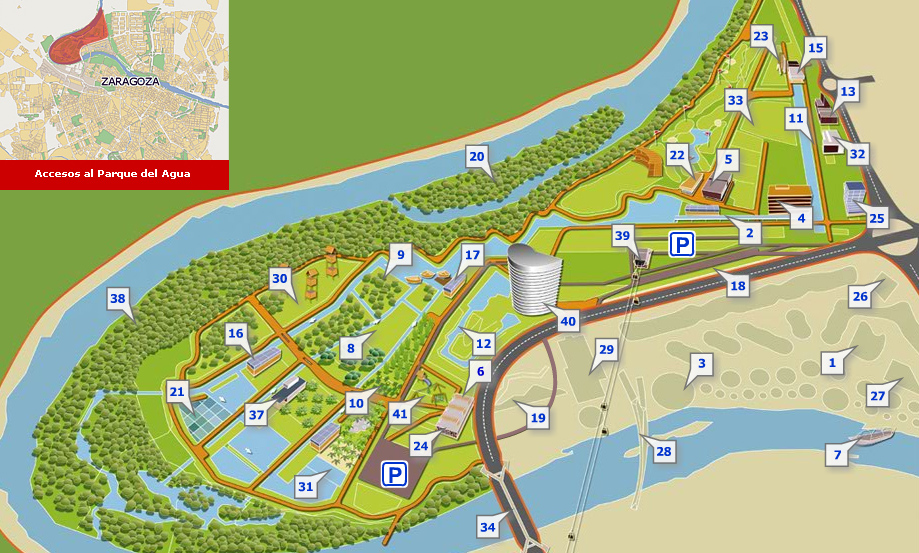 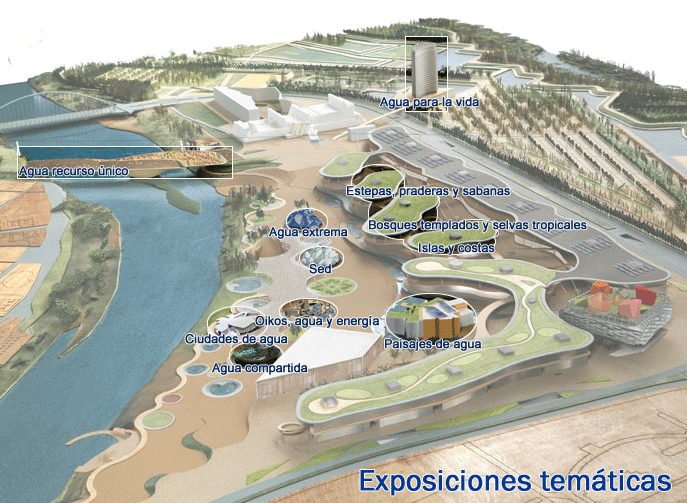 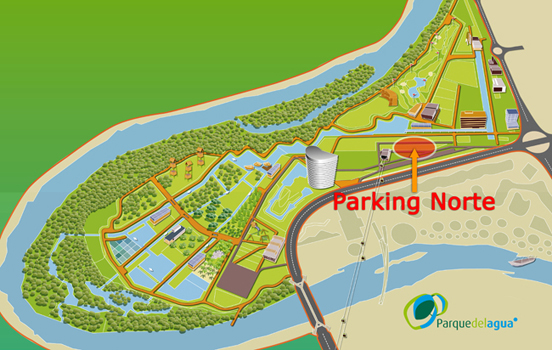 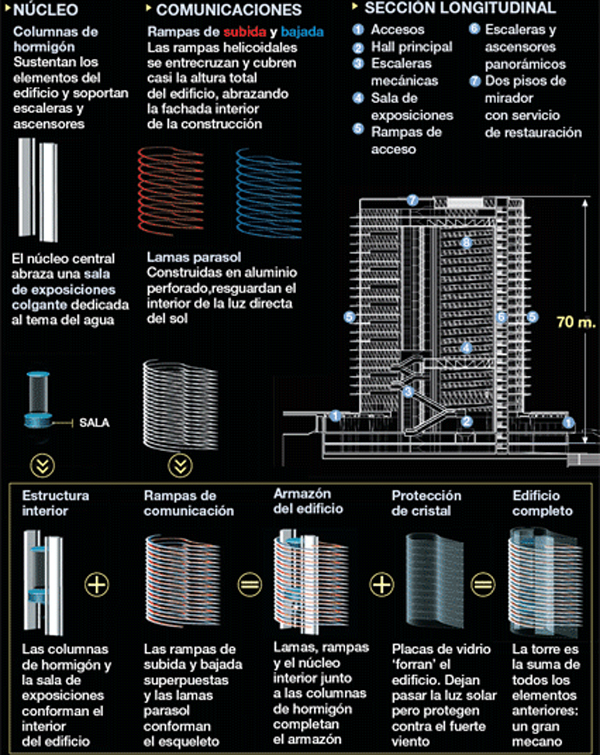 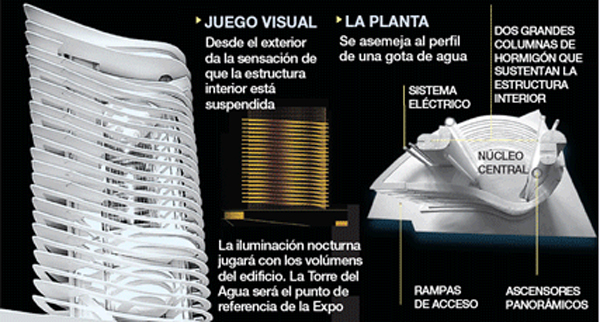 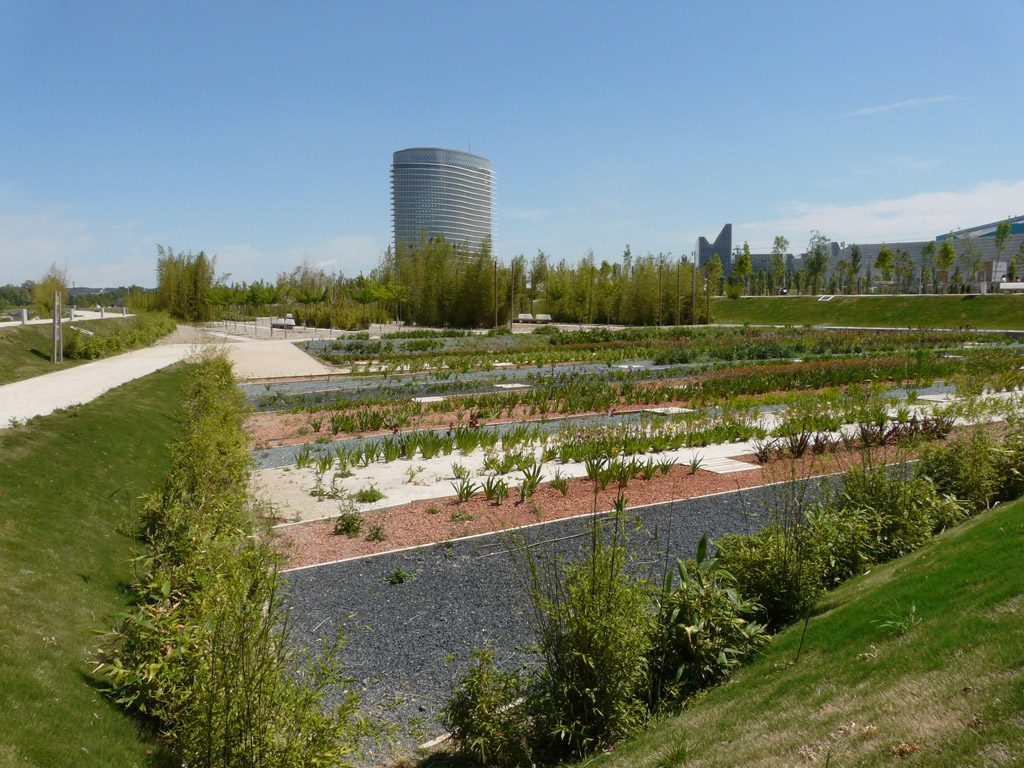 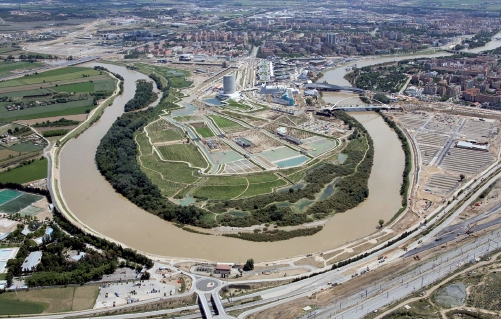 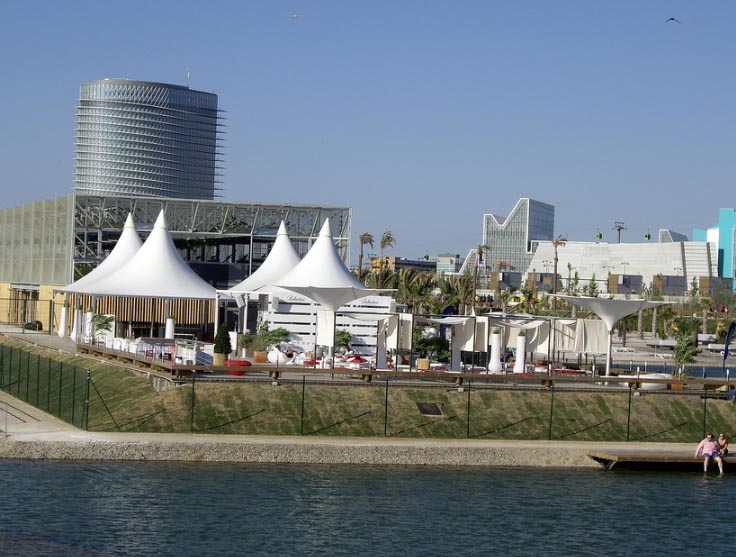 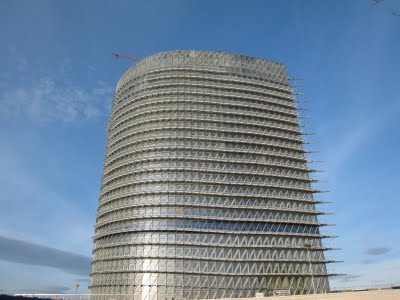 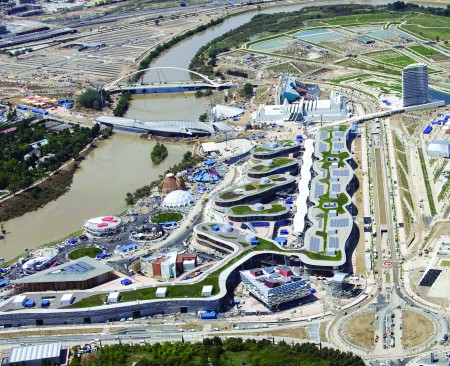 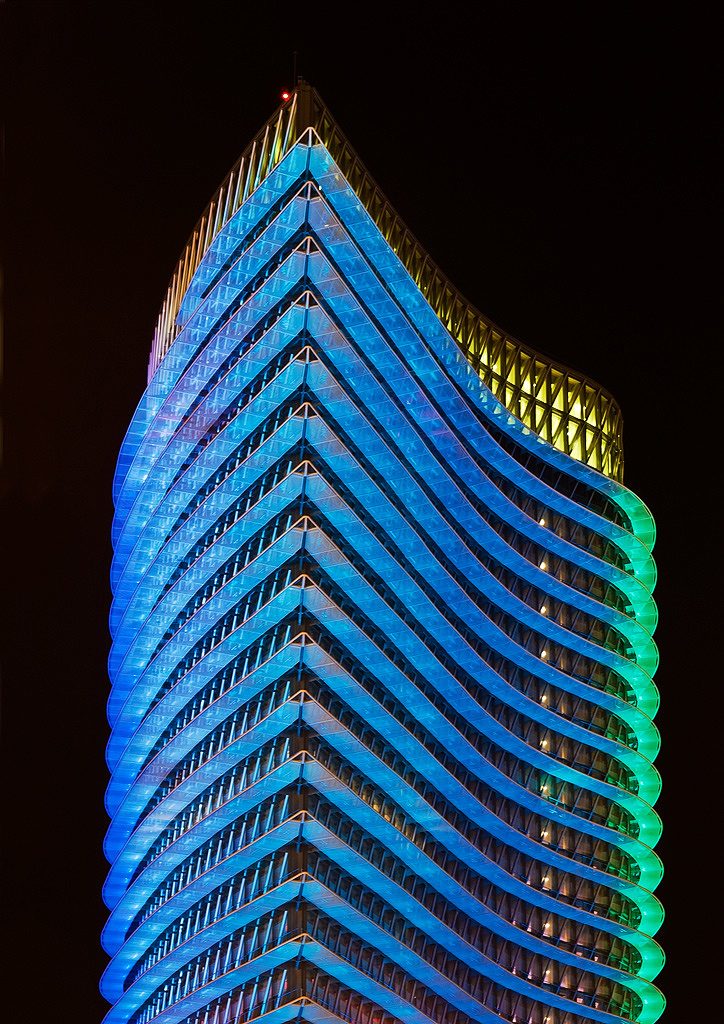 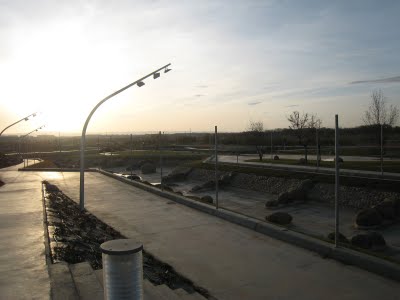 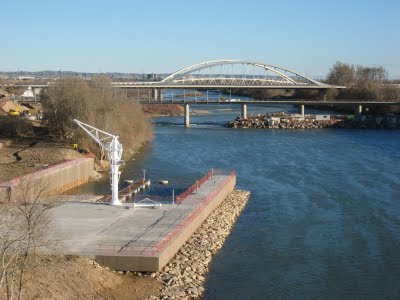 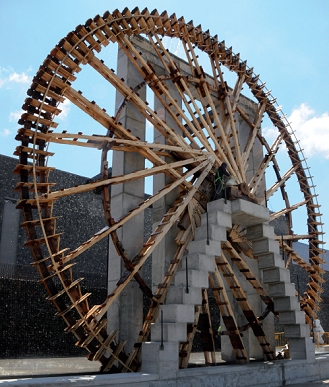 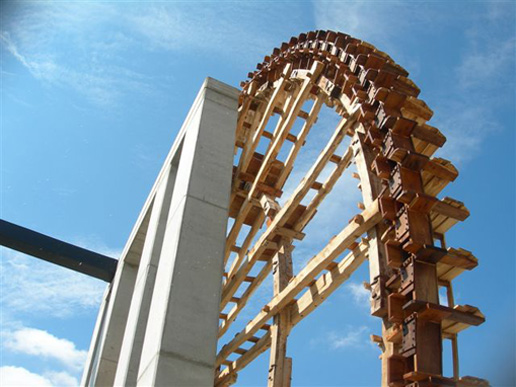 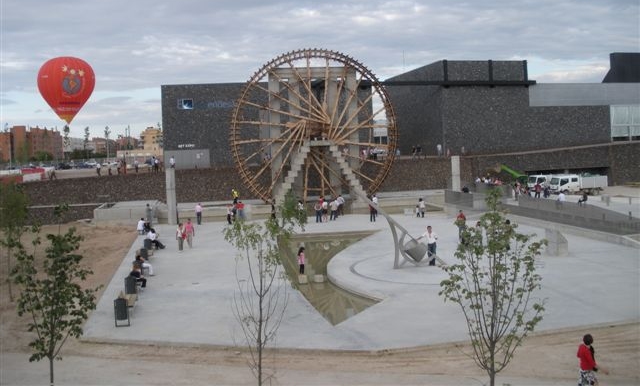 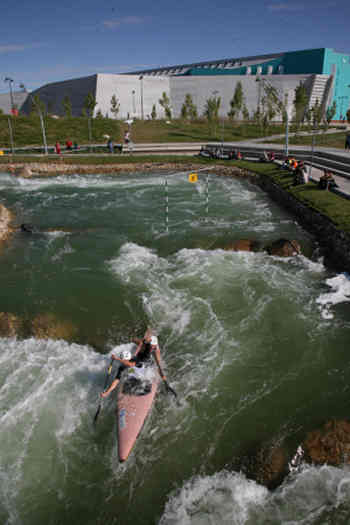 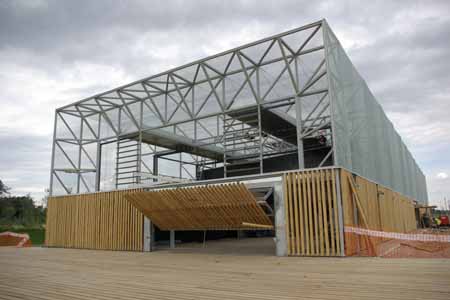 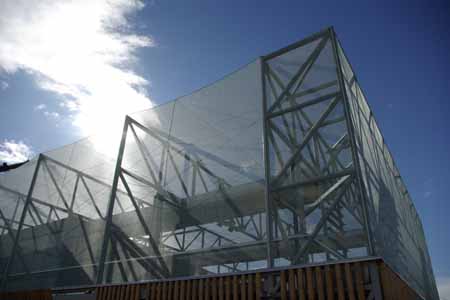 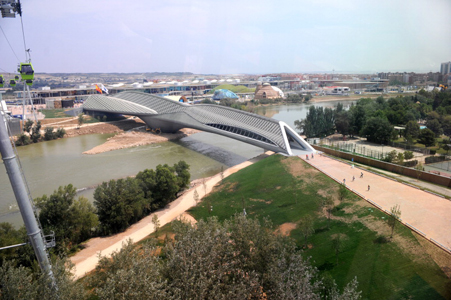 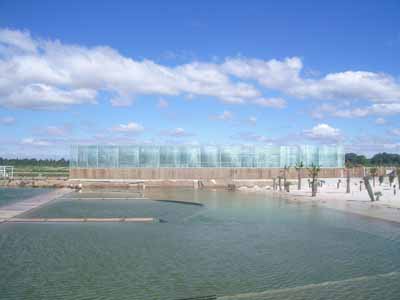 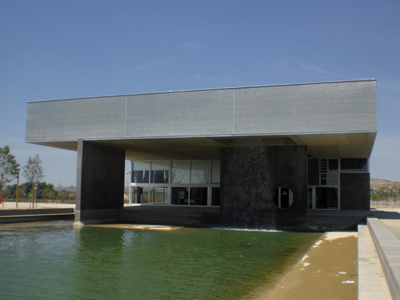