Richard King Mellon Hall of Science, better known as Mellon Hall of Science is one of Mies van der Rohe‘s less named works, perhaps because he is one of the first. It is a University Science Center that houses departments of biology, chemistry, physics and pharmacy. Completed in 1968, he received the “Laboratory of the Year” award in 1969 from Industrial Research magazine.

Duquesne University sought a well-known architect to design a building that would serve as the centerpiece of the Campus and unite the science departments into a single structure. King Richard Mellon Hall of Science turned out to be that centerpiece.

The building is located on the Duquesne University Campus, not far from downtown, in Pittsburgh, Pennsylvania, United States. The university is located in a densely built urban environment, along a cliff, overlooking the Monongahela River and surrounded by hills.

Mellon Hall is a laboratory building in whose design you can see the complete immersion of Mies in the classic ideals of proportion and symmetry, with a universal construction style based on precise measurements and proportions. The beams in I are used by Mies as their own reference, calling attention to their important structural use and symbolizing the replacement of the old stone column.

Mellon Hall represents one of Mies’ elegant solutions, both in design and in the use of materials, to challenge the marriage between classicism and modernism.

As in the Seagram Building, Mies makes use of what would become characteristic of its work, beams I, although in this case and due to the low height of the project they do not have the same effect as in the New York building. As in the Seagram Building, the beams in I are not only a structural element, but they appear basically as the only decorative element, especially due to its location on the facade.

At ground level, the first floor is retracted a creak with respect to the upper facades creating a continuous gallery around its perimeter and closing the interior spaces with floor-to-ceiling glass and a carefully chosen polished brick. Two hallways and wide corridors provide a generous space. To alleviate the intense rectangularity of the building, the polished brick walls in the hallways lean inward. At this level, the two opposite auditoriums are located completely symmetrical, with capacity for 250 people each, two machine rooms at the ends and a couple of stairs.

The 4-story building houses practice and teaching laboratories on the top three floors, postgraduate offices and faculty classrooms. The difference between the three levels lies in the distribution of the space, although the general organization is maintained, the laboratories, the classes of greater surface area and three central cores on the longer sides, separated by corridors. The technical facilities are distributed vertically through ducts located in the center of the plant or next to the stairs. Throughout the building the interior space is consistent with the exterior grid. It is standardized, regularized and functional. Mies believed that there were only a few interior designs that work within their buildings, with accommodations made for any use according to needs, although the design of the first floor is minimalist and elegant.

The building is completely symmetrical, with black metal panels and perhaps due to the needs of the laboratories inside the building, most of the windows are much smaller than they could be. However, with the use of tinted glass in its construction, the composition is cohesive and the beams in I set a rhythm.

Over time some provisions of the original project have changed. Cubicles have been added in certain halls that serve as classrooms for students. Most corridors are also used for the storage of various furniture, refrigerators and large pieces of scientific equipment.

The supporting structure of the building consists of columns and metal beams covered with concrete and surfaces in matt black painted steel. Mellon Hall has an 8,5m structural grid with exterior arcades and black painted steel structure. Its rectangular plan rises on vertical steel columns that surround the main core.

The upper three floors are laboratories with few windows to the outside and none in the interior. To meet this requirement, the usual windows of the facades of Mies are replaced in the lower two thirds with steel plates placed in front of the line of the crystals and after an insulation panel with a 5cm slit both wide and deep that visually separates it from the rest of the support elements, while granting rhythm and organization to the facade.

The entire exterior of Mellon Hall appears as a regular grid pattern, an array of large and small windows. Steel beams are placed in evenly spaced bays. Each bay is subdivided into four 2.13m modules consisting of alternate steel panels and fixed rectangular windows.

The building functions as a science laboratory and for this function Mies designed a superstructure with bolts, fireproof steel structure and exterior materials consisting of graphite painted steel plates, transparent glass and polished bricks. The metal carpentry of the facades, which is in line with the supporting structure, dark combined with large areas of glass gives the building an open quality, emphasizing the modern materials with which it was built and in a transparent approach to construction that shows, instead of hiding, the structural framework.

The perimeter of the ground floor is of transparent glass except for the opaque elements that hide the machine rooms made with yellow bricks and the auditoriums. 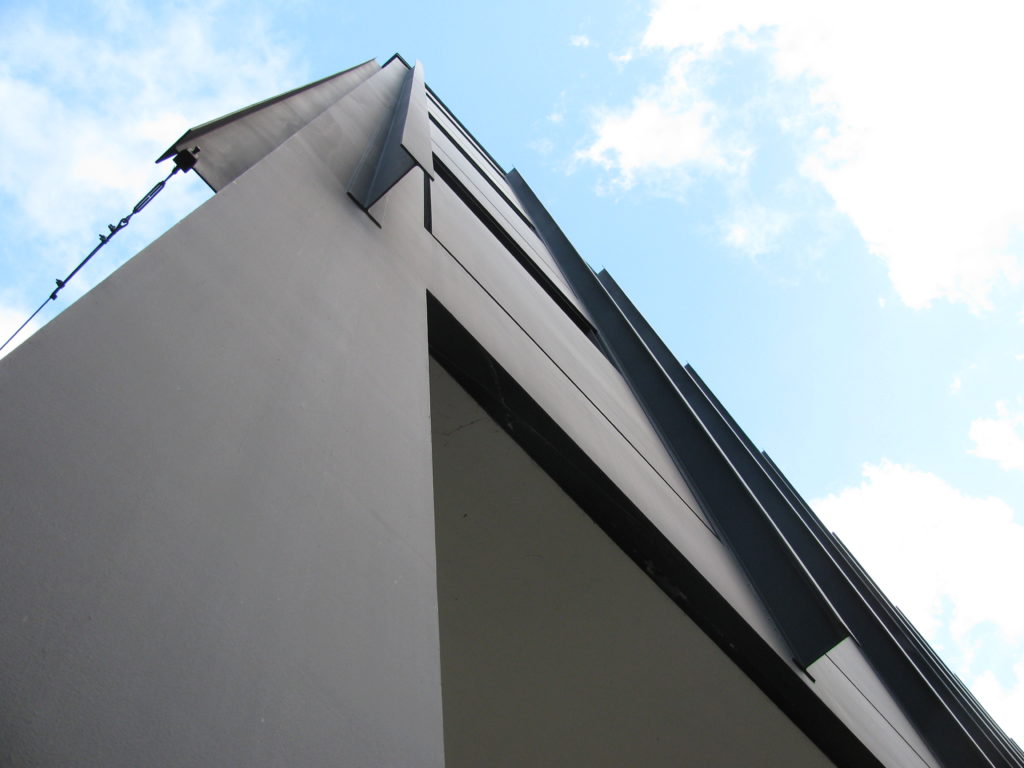 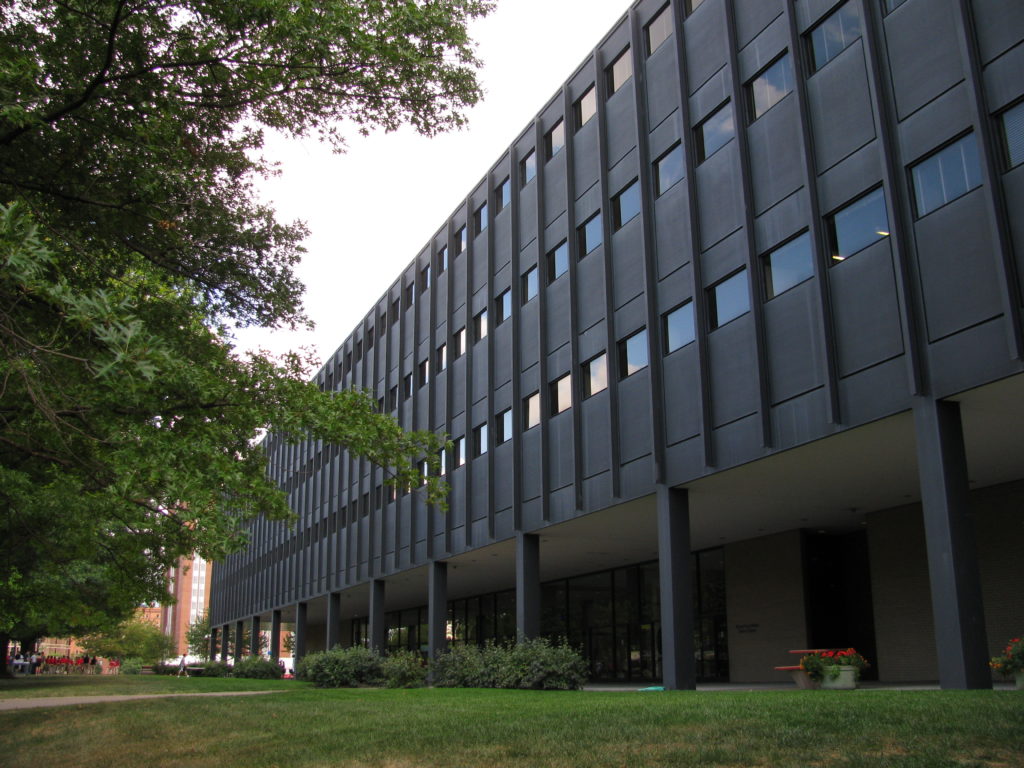 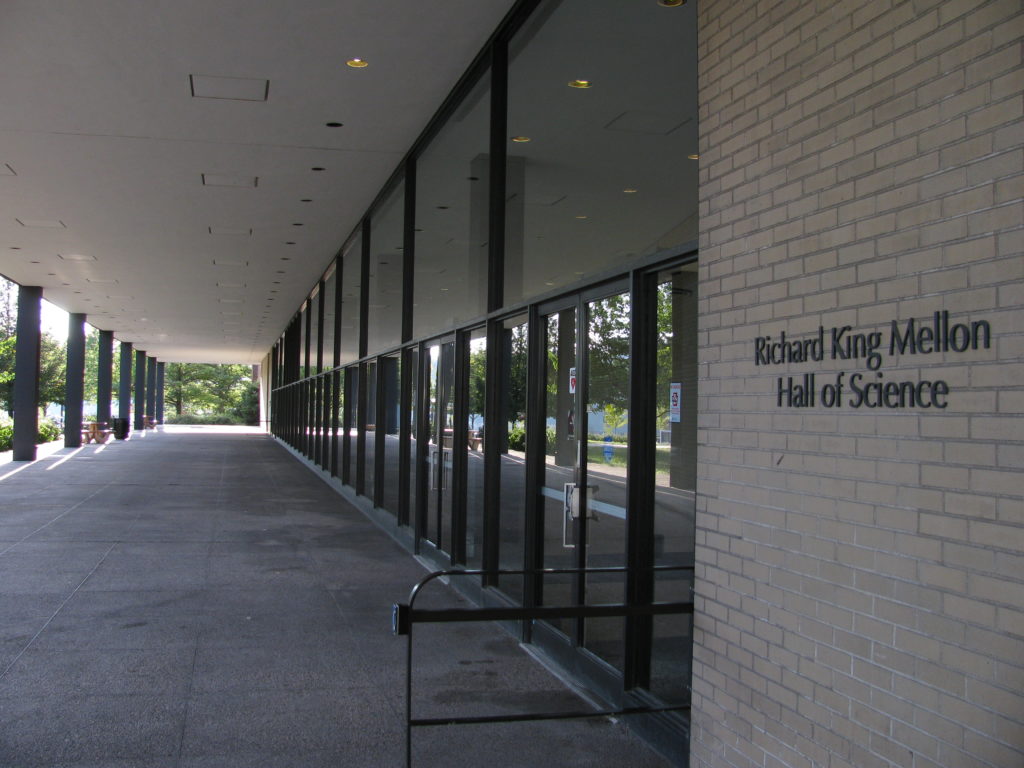 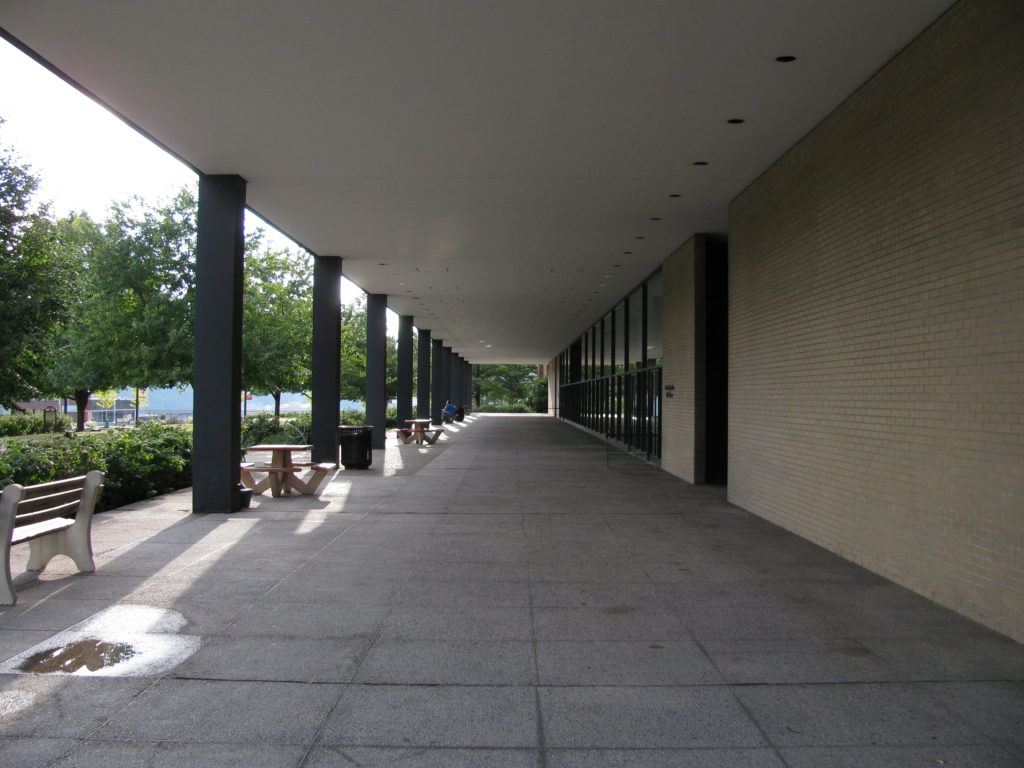 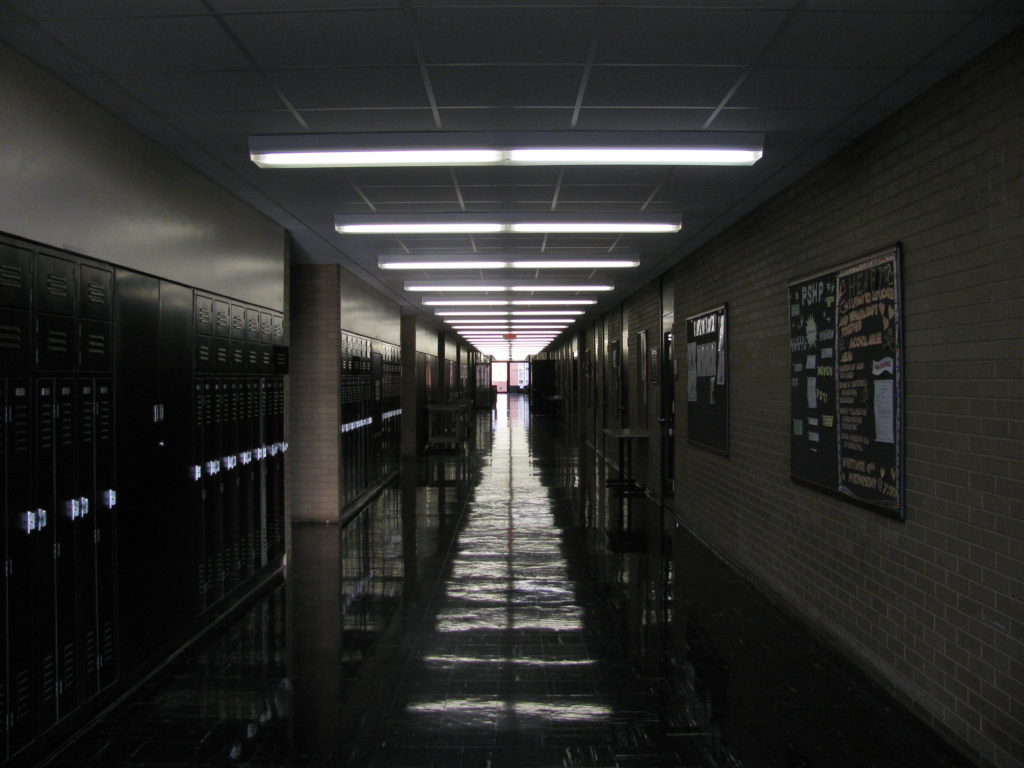 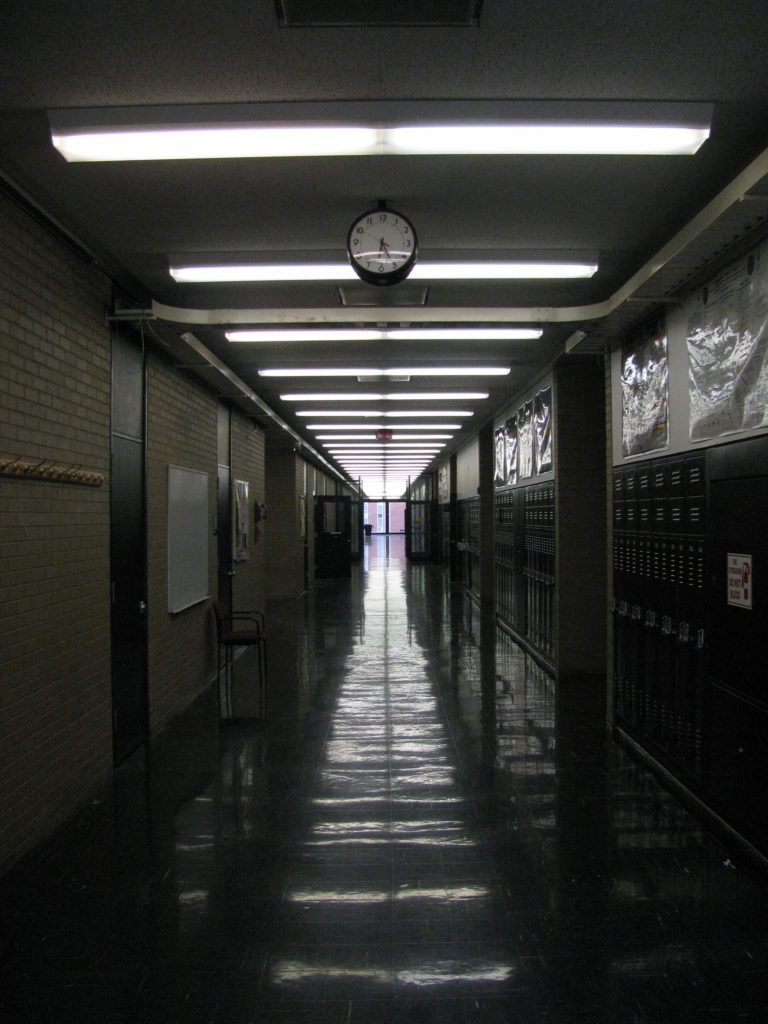 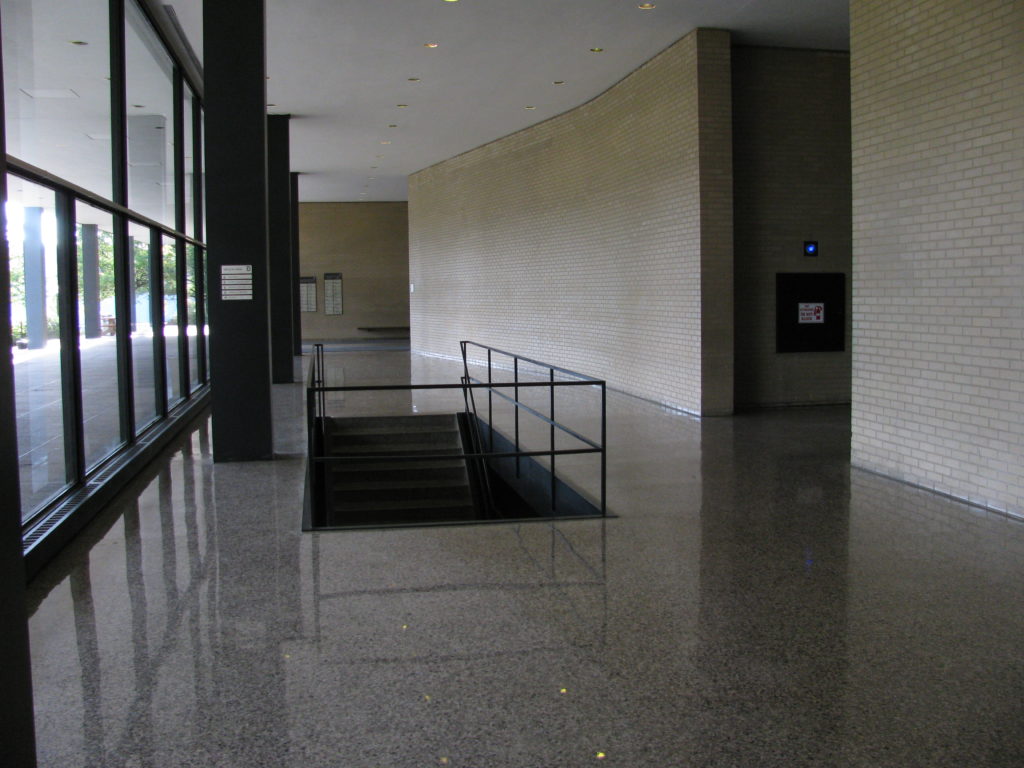 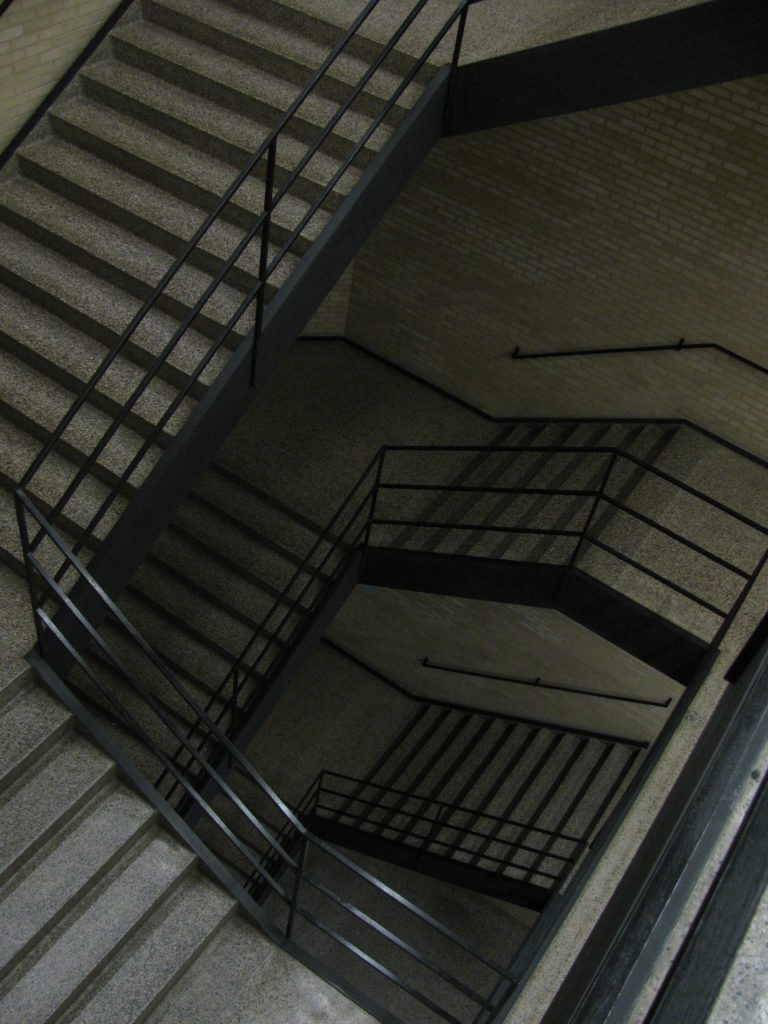 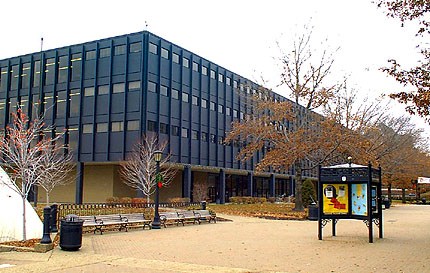 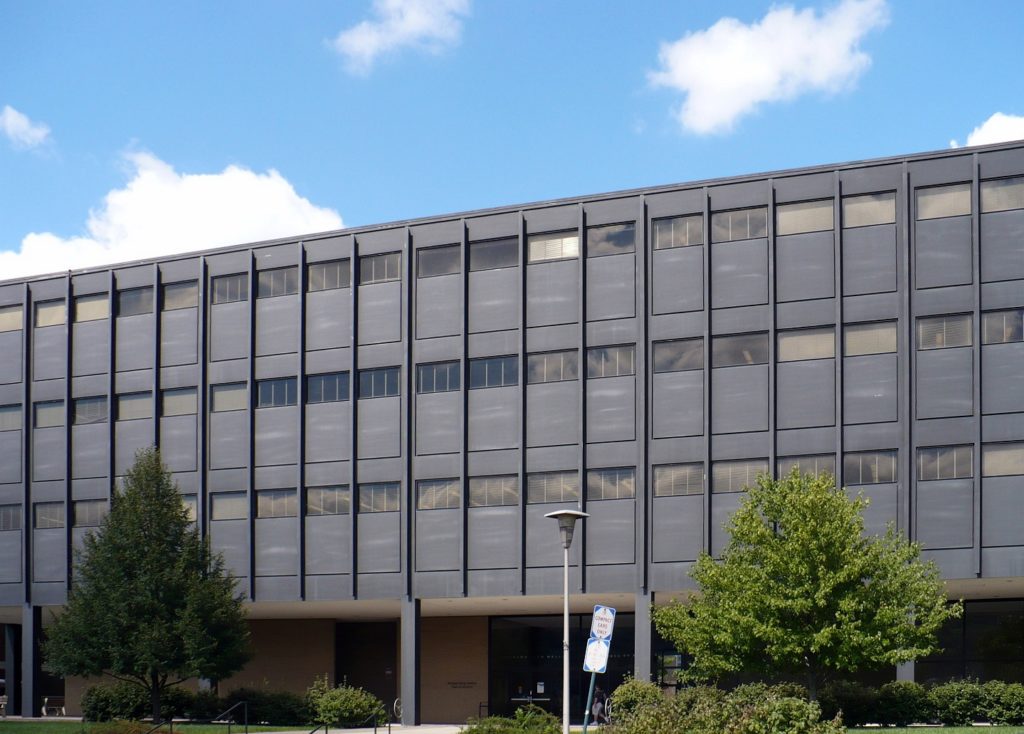 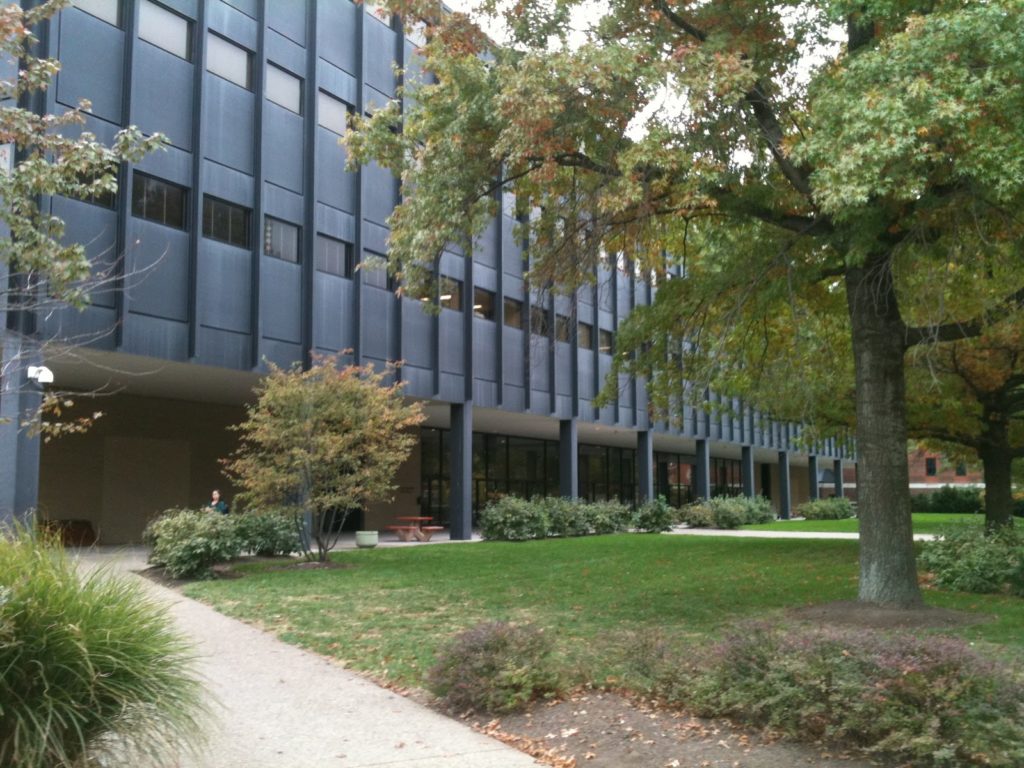 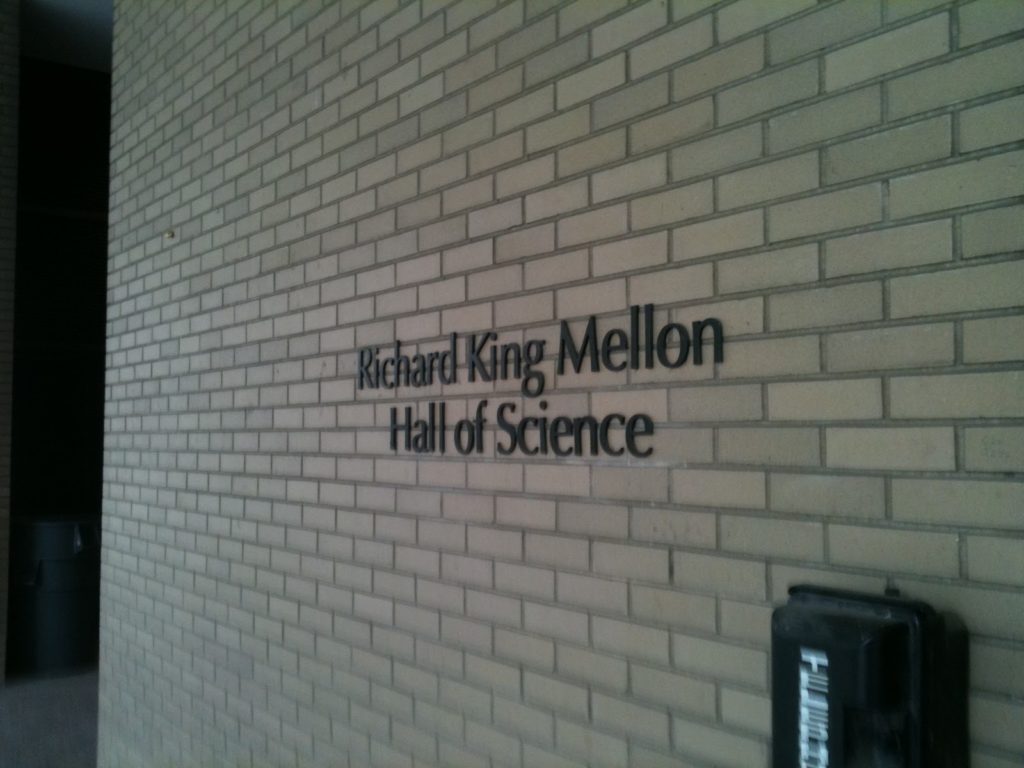 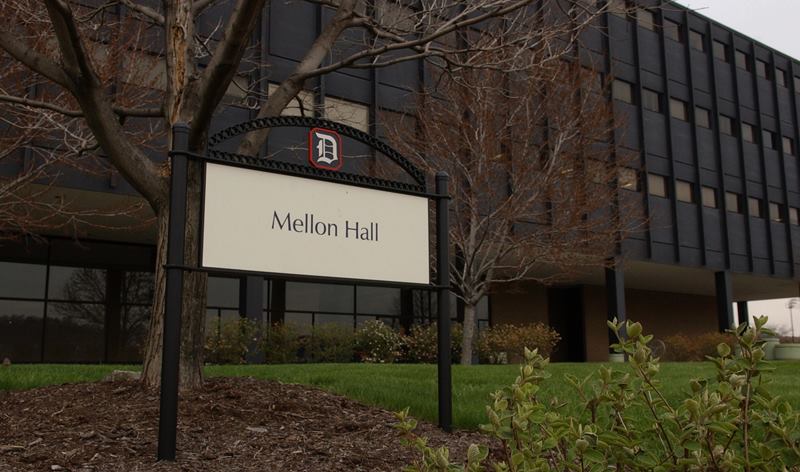 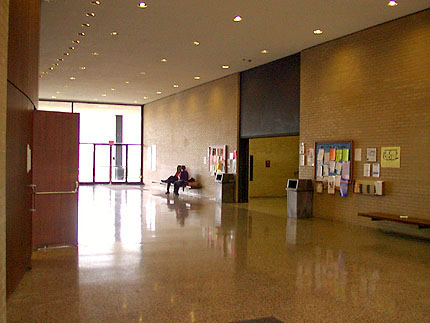 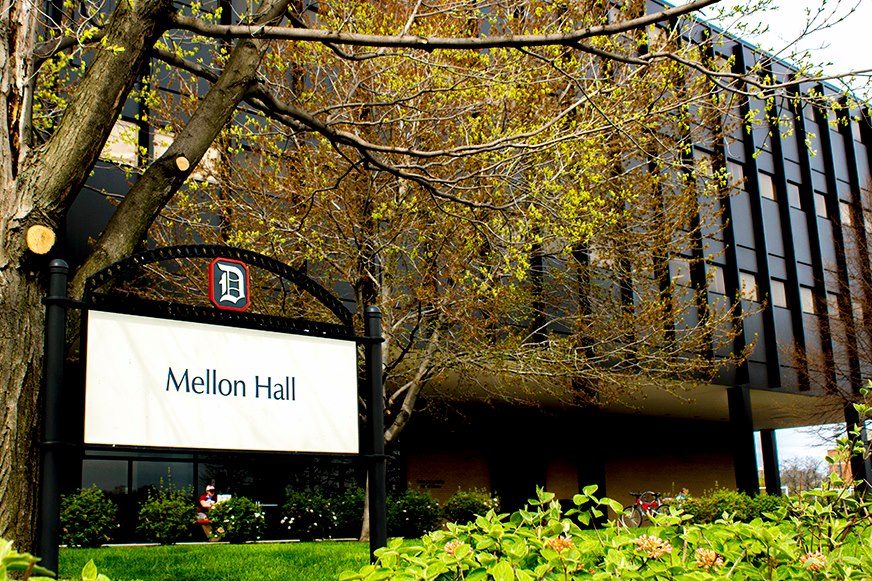 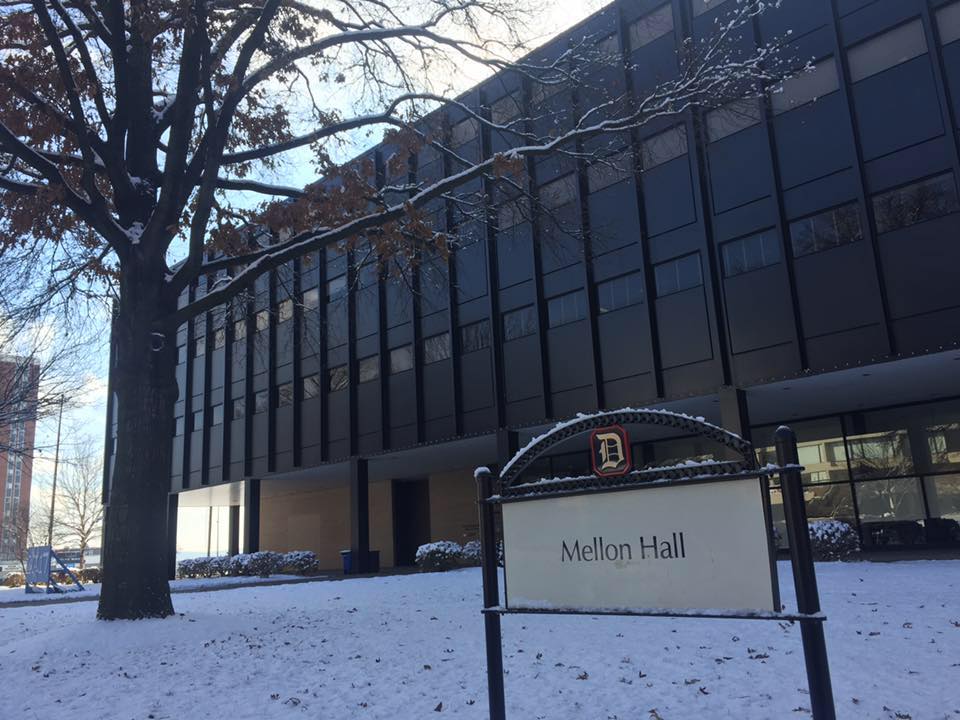 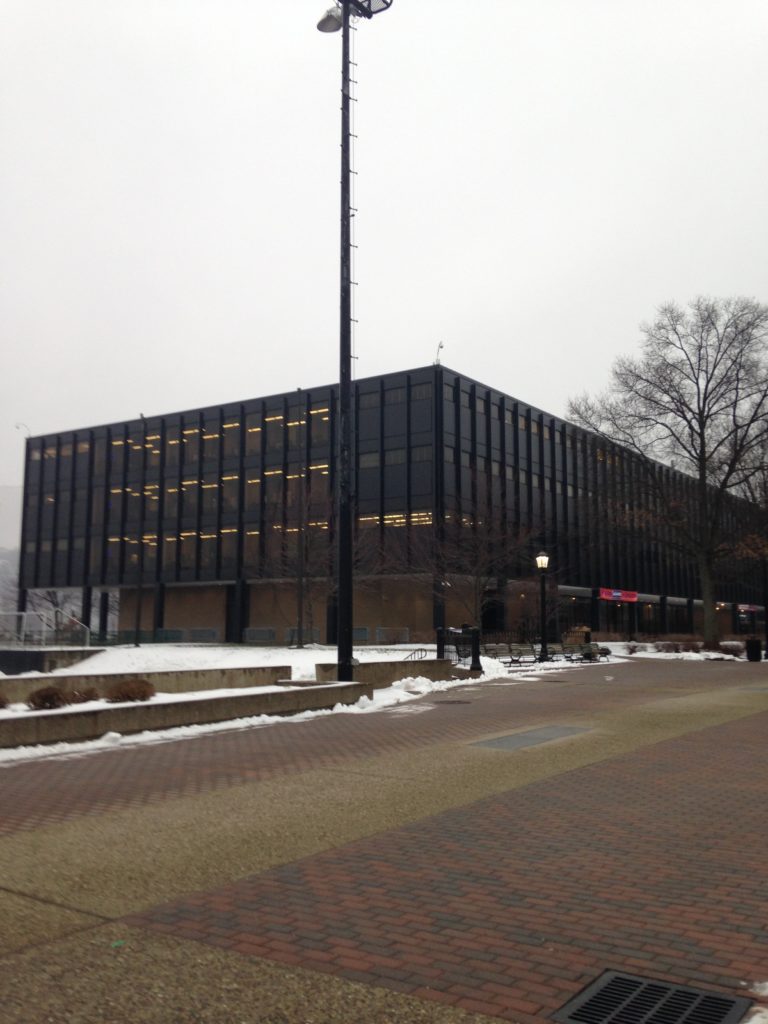