The Masdar Institute, the first phase, inaugurated in late 2010 and designed by Norman Foster in Abu Dhabi, is devoted to research on renewable energy and sustainability. Fully stocked with solar energy behavior will serve as reference for the construction of the emerging progressive Masdar. Graduates of the Institute community up the first resident of the city

The building design includes passive strategies that enhance energy and good behavior are presented as a reinterpretation of traditional Arab architecture.

“Many have dreamed of a utopian project that could be solar. The official opening today of the first phase of Masdar Institute campus in the city of Masdar is a first embodiment of this search. The student community is already active, living and working in their barracks. This community, independent of any mains, develops a surplus of 60 percent of its own energy needs, process their wastewater on site, which is recycled and are pioneers of many of the concepts of saving energy. This is a bold experiment that will change and evolve over time, as it houses twelve separate research projects with potential applications in the world ”

The Masdar Institute, was created to develop the technology necessary for the operation of which from 2025 will be one of the most sustainable cities in the world.

A 17 km from Abu Dhabi, United Arab Emirates, in an area of ​​6 square kilometers, the project Masdar City was begun in 2006 and will have capacity to accommodate 1500 companies, 40,000 and 50,000 tourists simultaneously.

All energy used is renewable maximizing solar and wind energy. Not be allowed to use any kind of fuel you need more than 10 years to occur, which will minimize emissions of CO2. Drinking water protection is also provided and is expected to be produced by desalination plants run by solar energy. The water used for watering gardens only be pre-treated wastewater.

To access the Masdar Institute, there are ten personal rapid transit vehicles operated as a pilot and travel the perimeter of the city to the estacionameinto.

The facades of the buildings are oriented so that they can provide as much shade as possible in an area where temperatures can reach 50 degrees, the wind while protecting the rest of the interior construction.

The windows of residential buildings are protected by a contemporary reinterpretation of the “mashrabiya” typical Arab viewpoint projected. In this case the lattice is made of glass reinforced concrete instead of wood carving. Perforations to create light and shadows based on designs found in traditional Islamic architecture.

The thermal transition spaces, facades, are conditioned by two systems, a natural ventilation and thermal mass on the other.
Collecting wind towers and courtyards are the strategies of ventilation and night cooling for the street level, where the main pedestrian traffic occurs.

Cooling air currents passing through the public spaces using a contemporary interpretation of the towers of wind collector, traditional in the region. These spaces are cooled further through the landscaped, including designs with green spaces and water, to increase cooling by evaporation.

The thermal testing chamber in situ by the research team confirmed significant lower radiation temperatures in the campus environment, compared with the usual practice in downtown Abu Dhabi.

The campus will consist of a main building, a study center, laboratories and four blocks to house students.

At the time of his inauguration, had only built one of the four blocks planned, the relevant departments to one, two or three bedrooms that allows a number of students between 600 and 800. These apartments built in low high-density blocks, create a balance between social environment and the training lab. In this first stage also included a mosque, an auditorium and a sports center.

In the second phase will include more laboratories and departments.

The laboratories offer extraordinary flexibility to change services “plug & play” designed to encourage interdisciplinary research. These internal spaces are protected from the sun by eaves and horizontal and vertical blinds, and in turn have a high thermal insulation through the facades of inflatable mattresses, which remain cool to the touch, even under the most intense desert sun.

The laboratories and the housing area complete with a variety of social spaces, including a gym, a bar, a café, a training center, a “Majlis” or meeting space and green areas that extend the civic realm collaborate to create a new destination within the city.

Within the estate there is the ten-megawatt solar park that offers 60% more energy than is consumed in the Masdar Institute. Excess energy is stored or transported to the city of Abu Dhabi.

The reinterpretation of the Arab viewpoint “mashrabiya” was made with reinforced concrete, colored with local sand to minimize maintenance and glass enclosed

The Institute has a water and energy consumption much lower than the average for the rest of the buildings in the UAE. The Institute and its facilities use 54% less water, 51% less electricity and are fully powered by solar energy.
Approximately 30% of campus energy generated by solar panels on the roof and 75% of hot water is also obtained by this system. There are more than five thousand square meters of photovoltaic systems located on roofs, which provide electricity and sun protection on the street level. 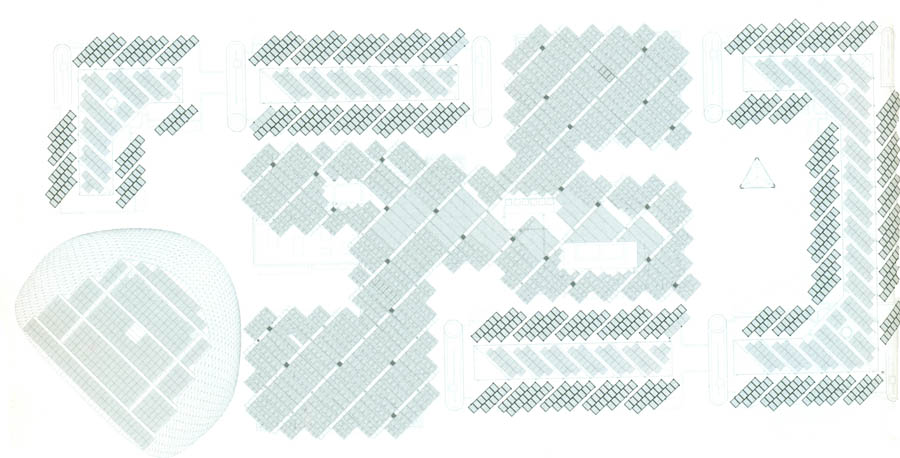 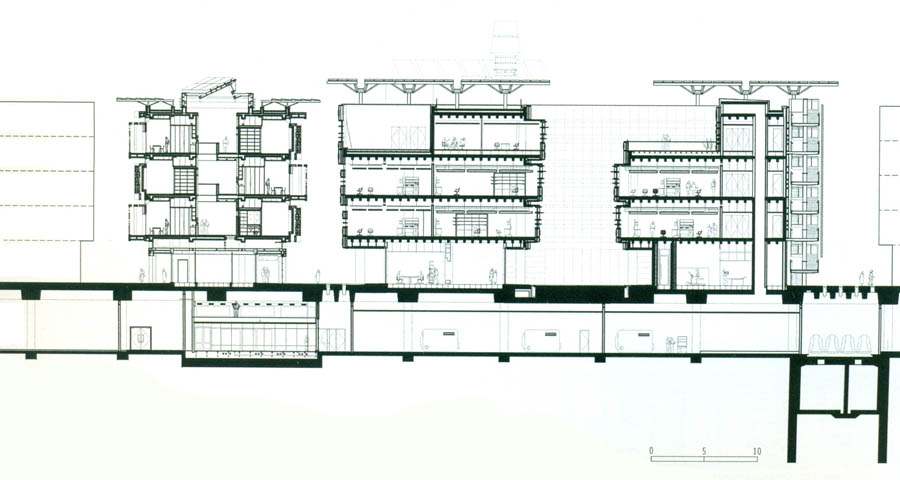 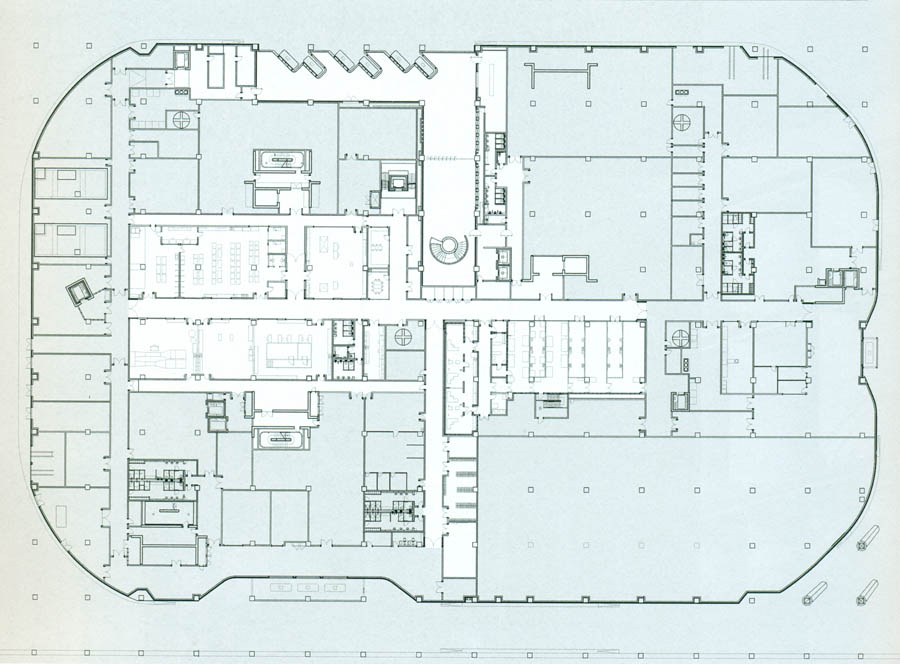 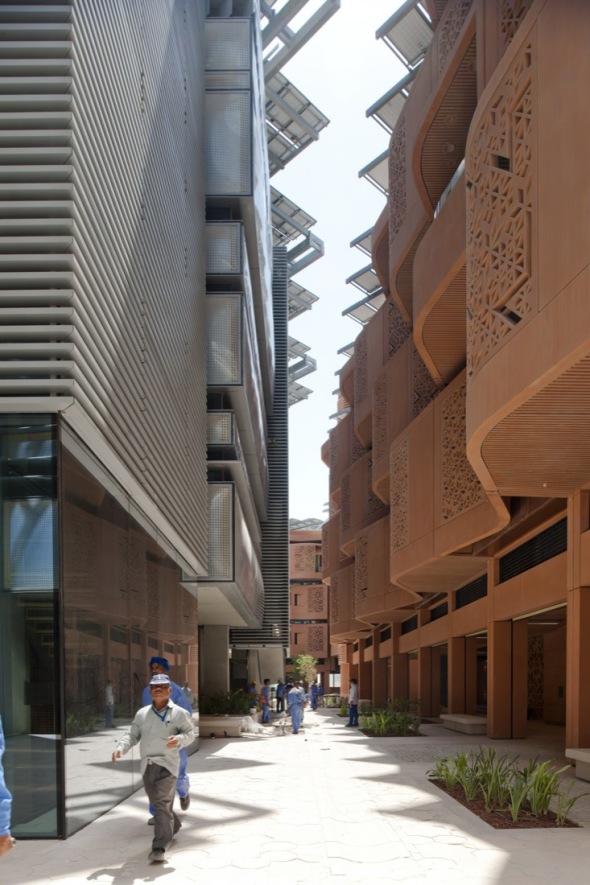 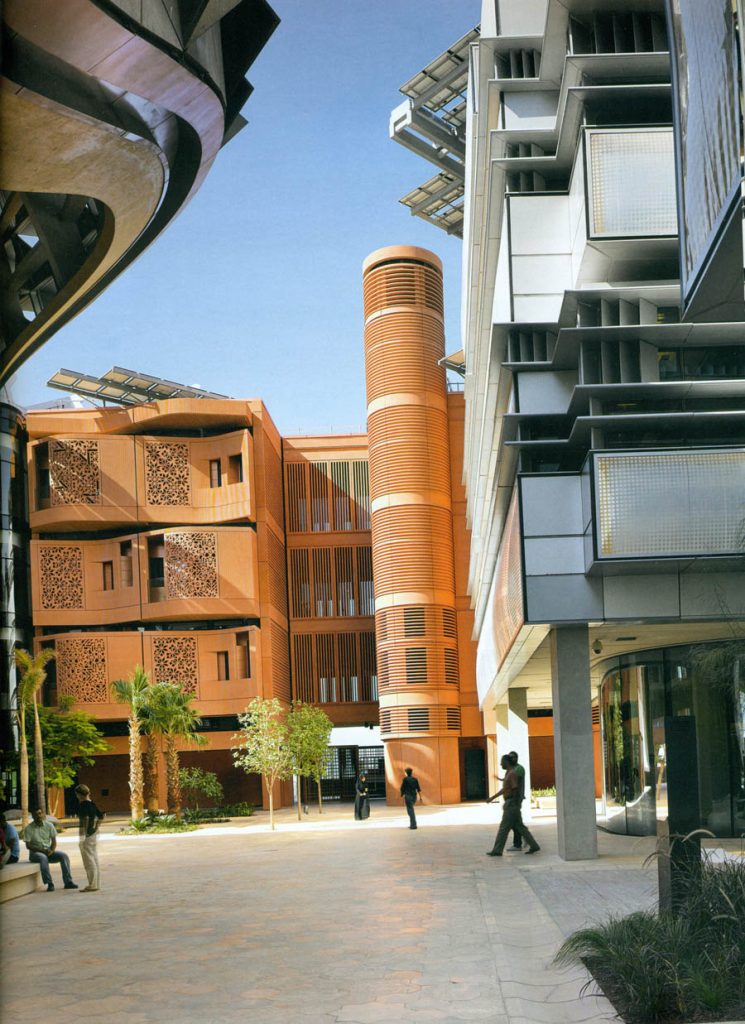 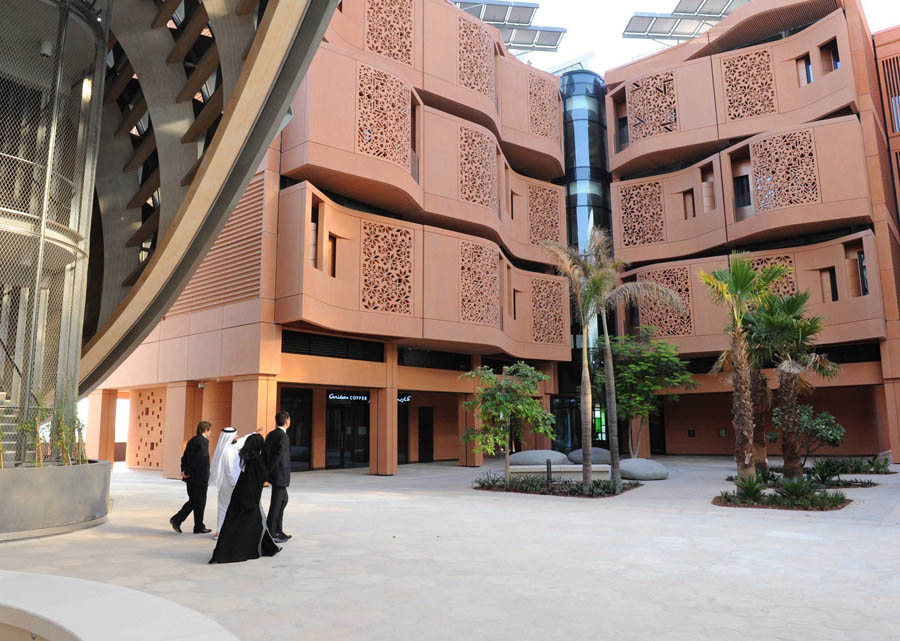 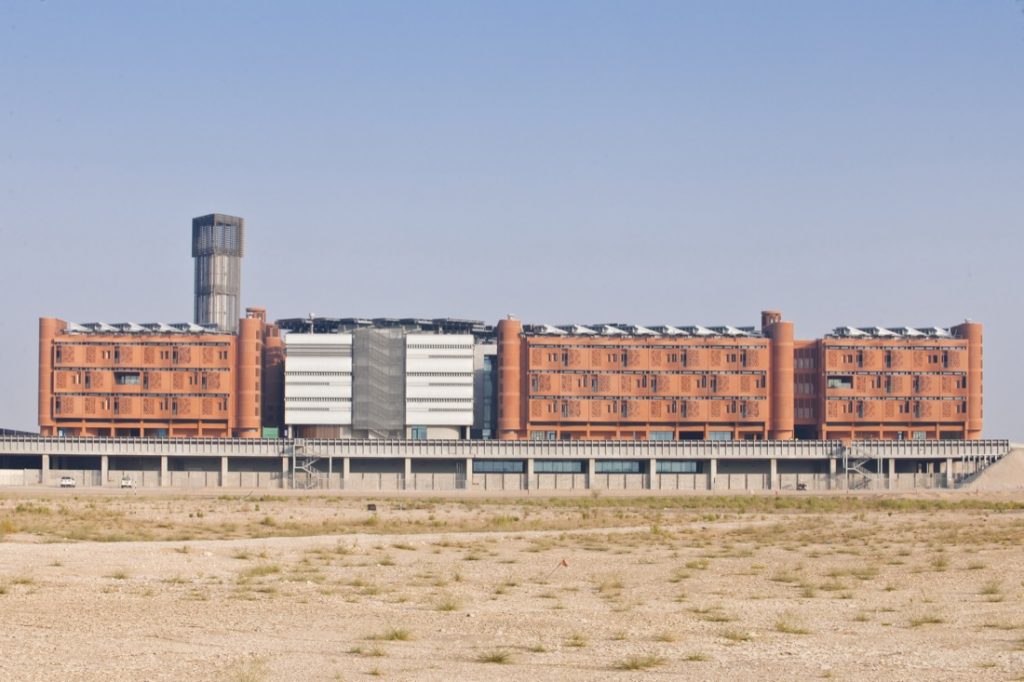 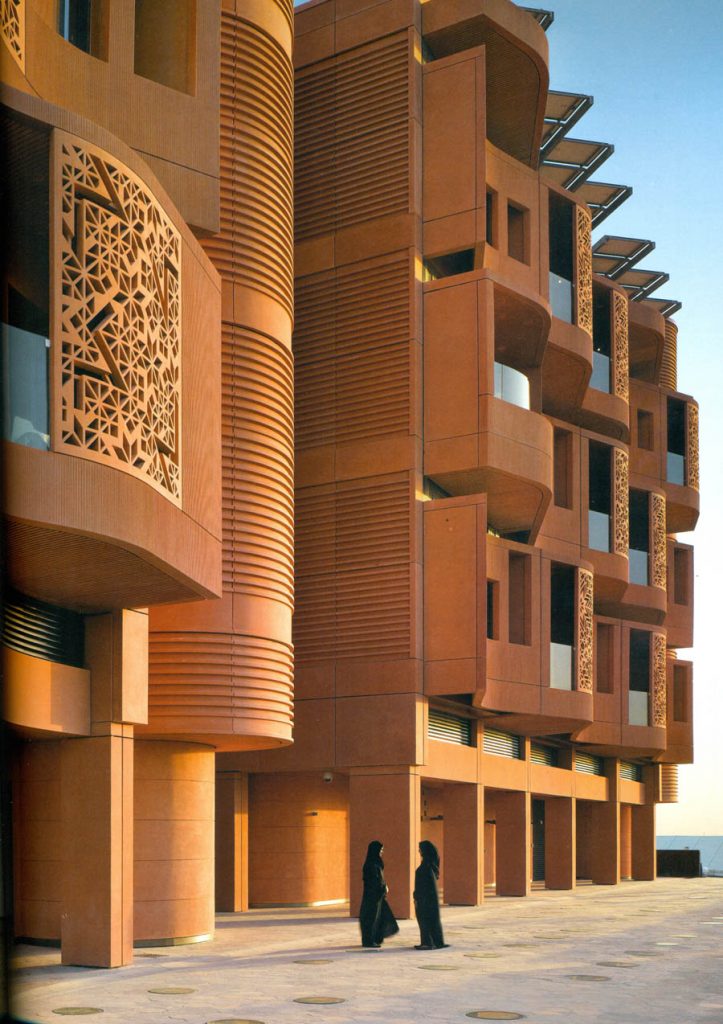 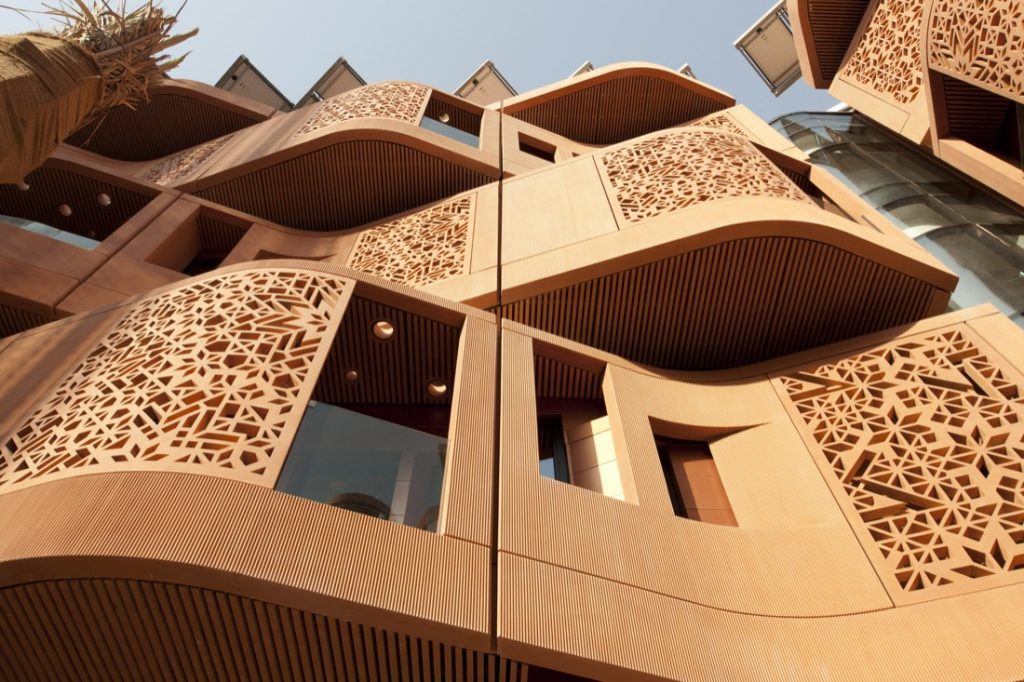 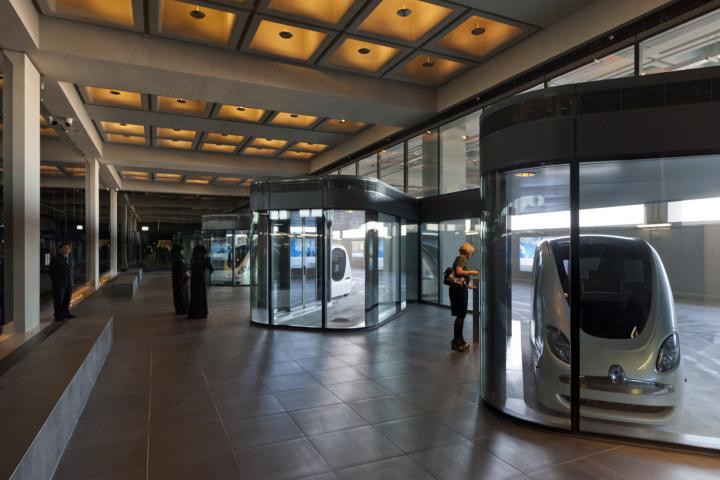 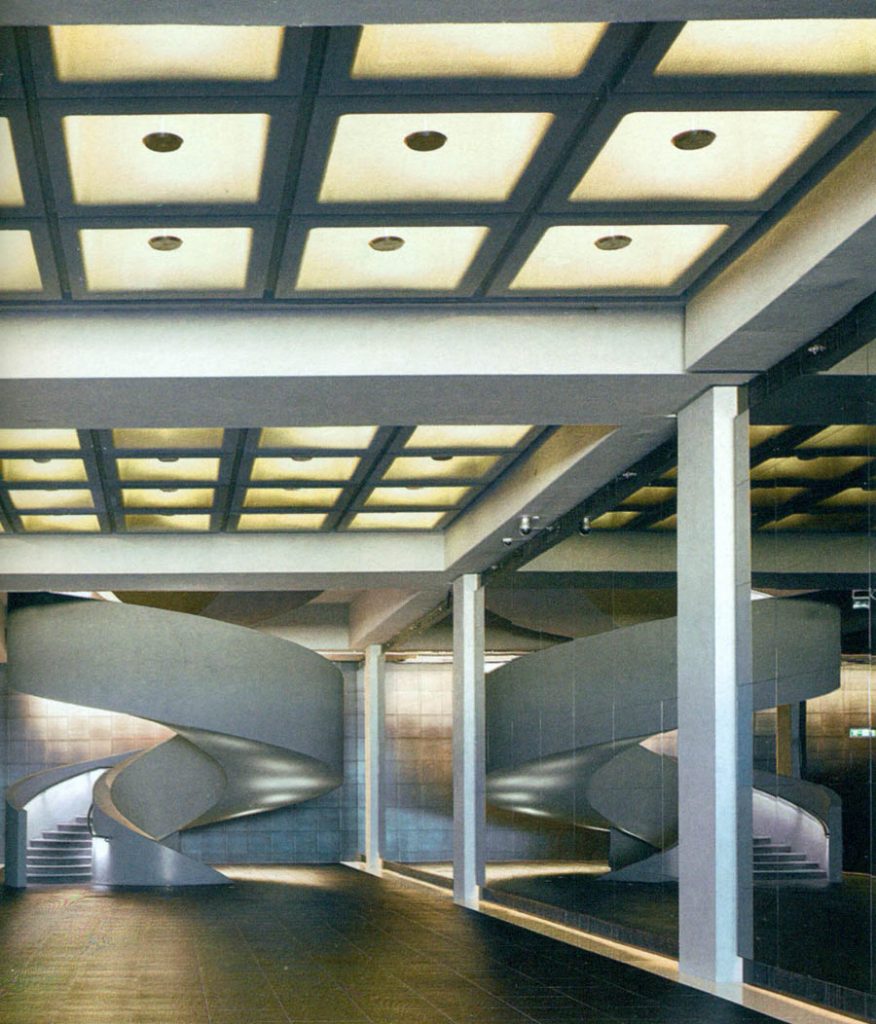 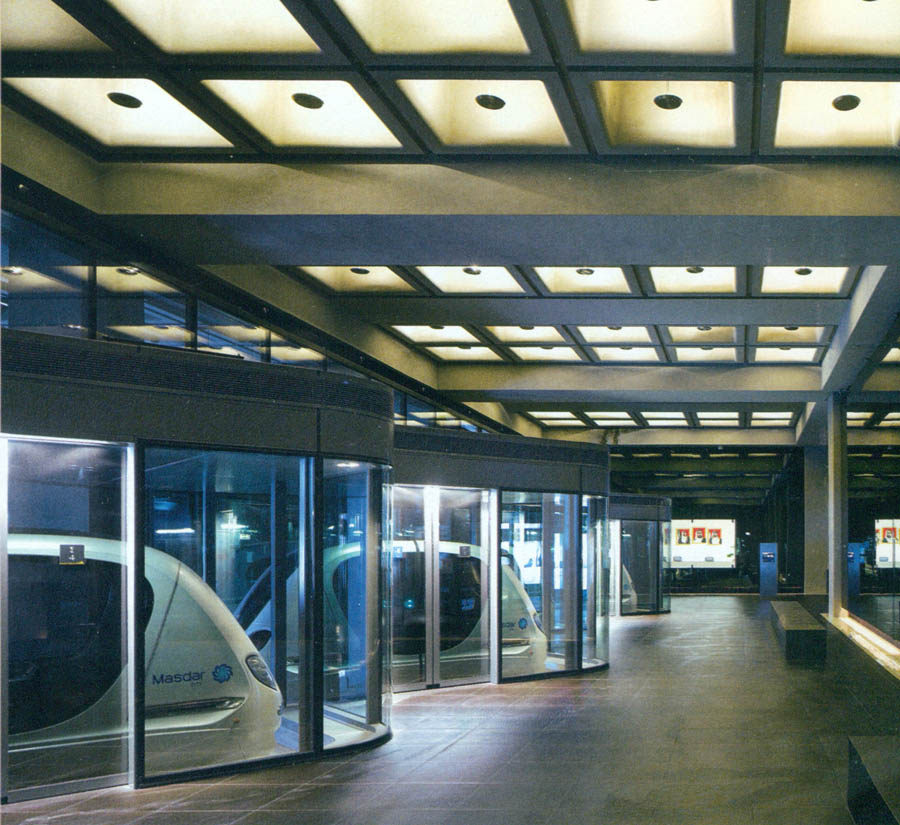 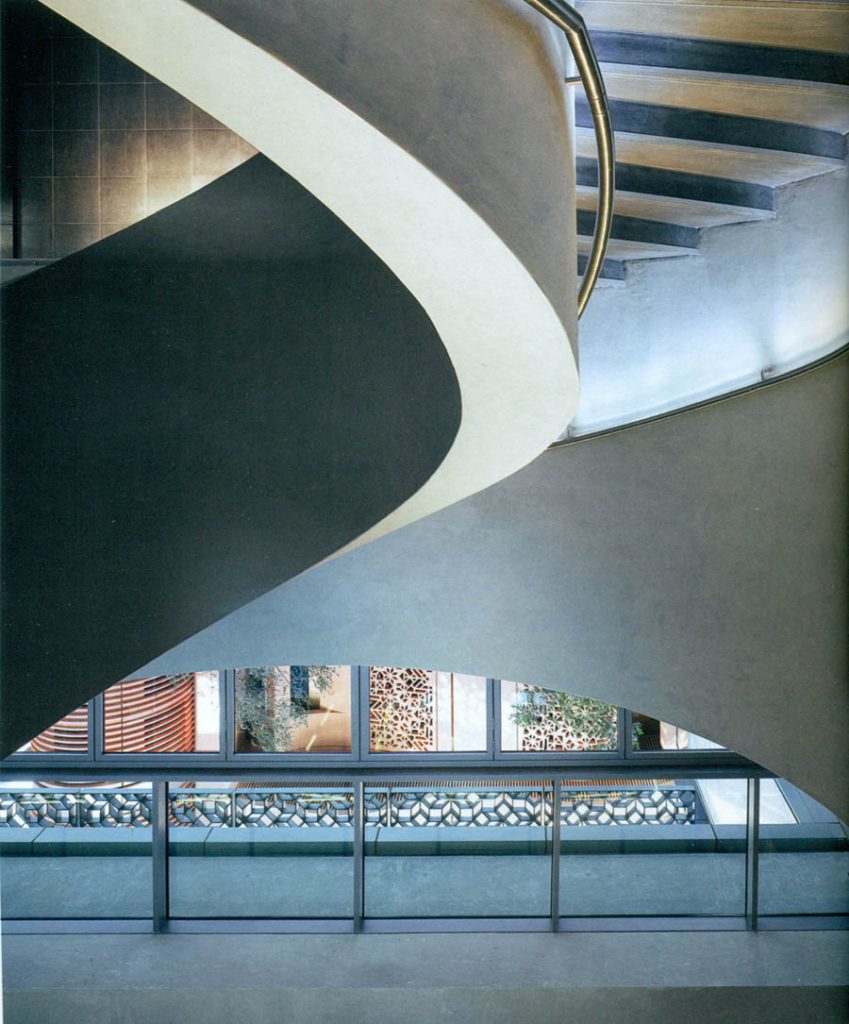 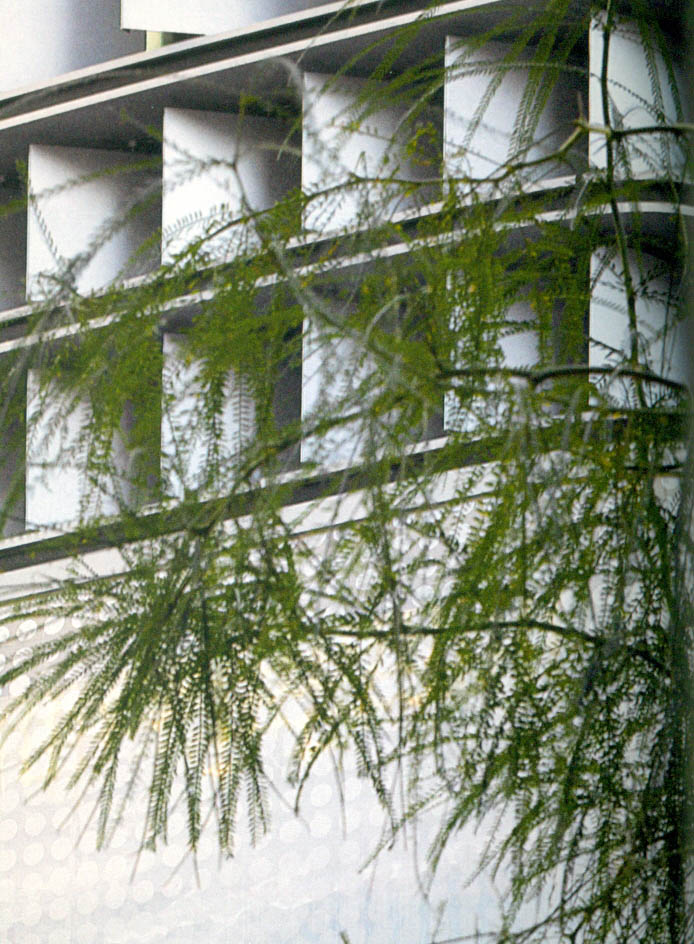 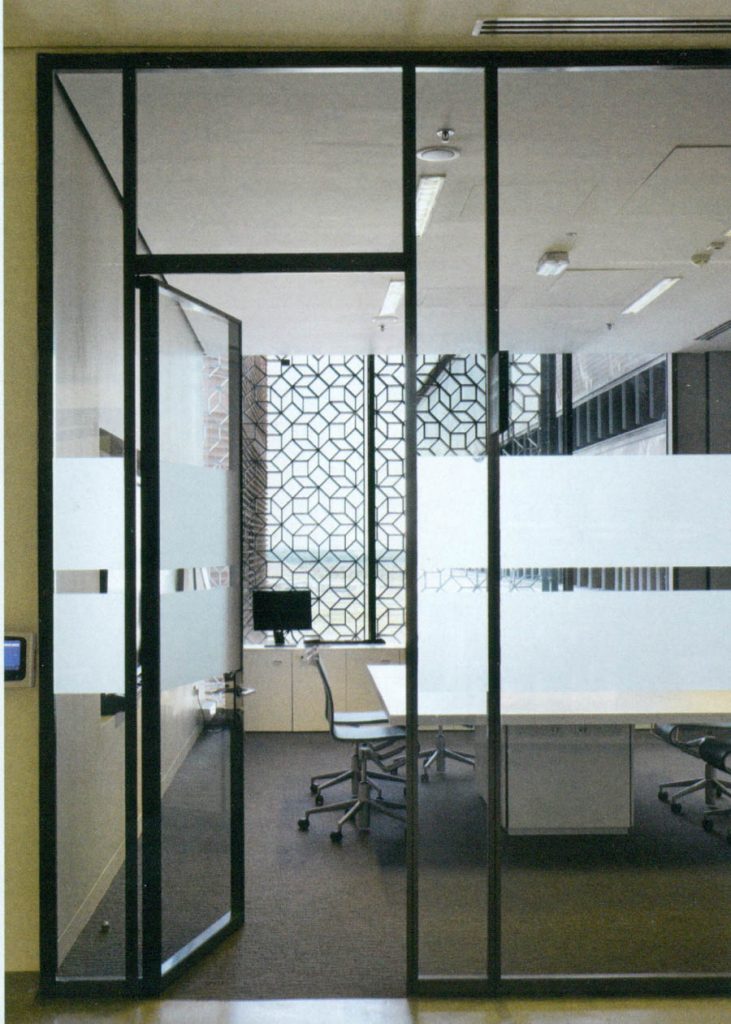 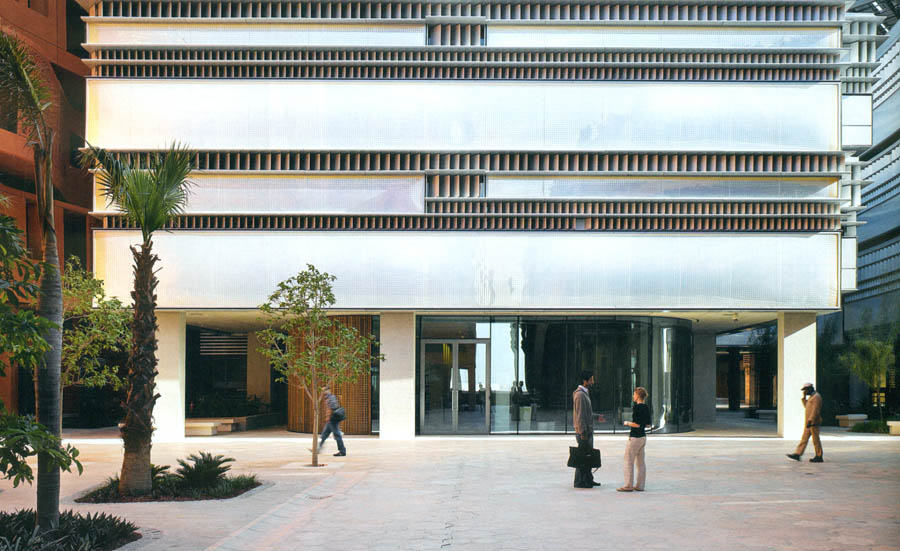 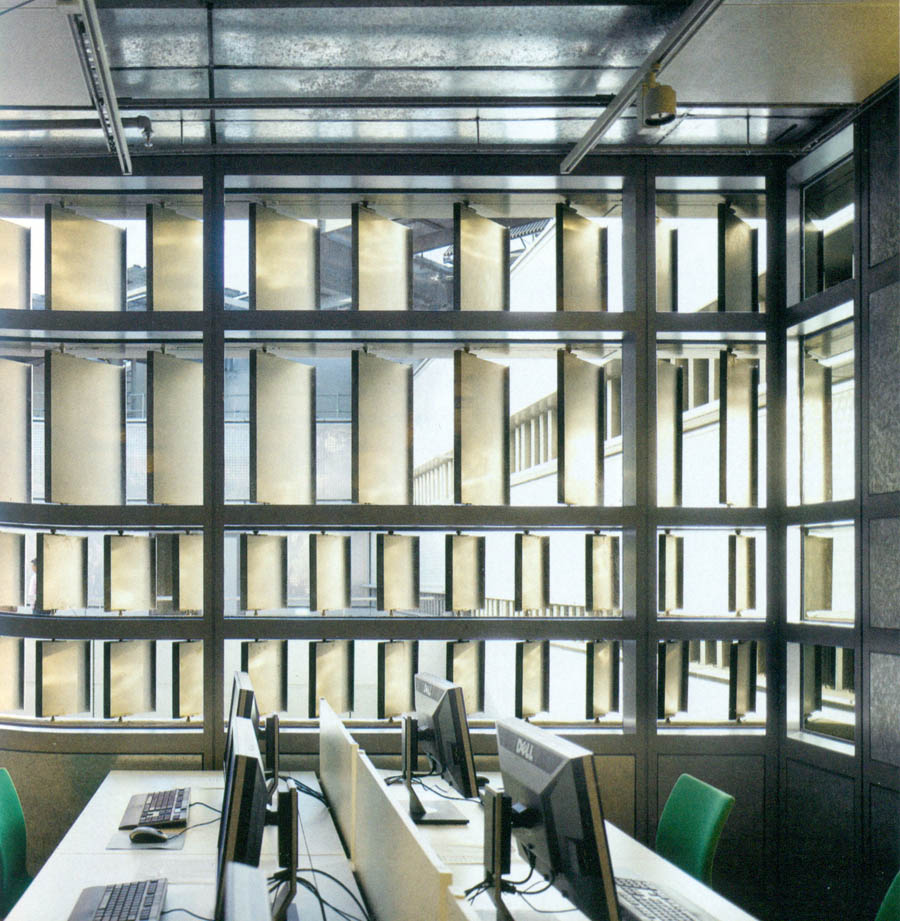 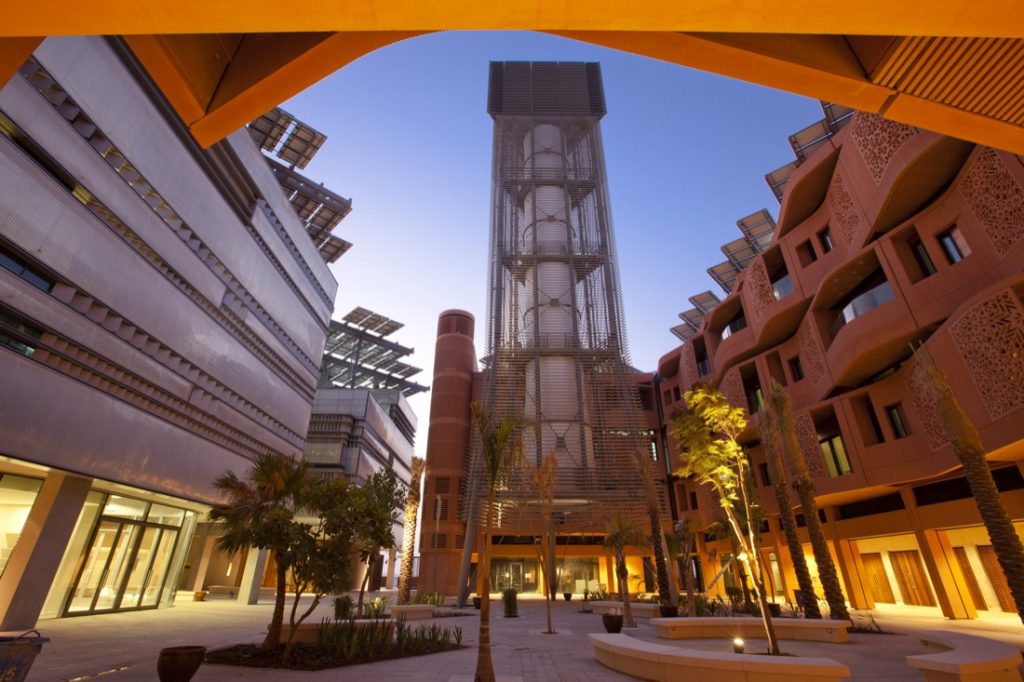 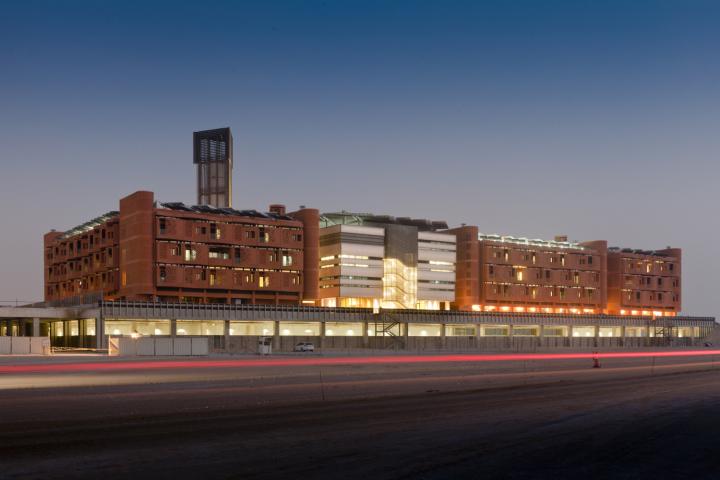