The Marshall House, built by Barrie Marshall Denton Corker Marshall Studio as a beach house for his family, is long, dark and austere, showing a refined and elegant design.

Completed in 1992, the house of Philip Island, as it is also known, is one in a series of formal experiments to create simple, devoid of conventional domestic connotations and has become an outstanding example of residential architecture in Australia spaces.

This vacation home is located in Philip Island, overlooking the small bay of Kitty Miller, Victoria, Australia, a two-hour drive east of Melbourne.

Buried in the sand dunes from the beach you can see a low, black line, the color of the rocks, uneven tufts of grass growing in the dunes above the house. On the land side is completely hidden. The goal was to keep a low profile and have an internal focus of the house, avoiding engagement with the surrounding context.

The architect thought first build a wooden house that meets the mission of beach house, but to reflect on the environment realized that the worst thing you could do with the landscape of Kitty Miller Bay would place an object in the middle. With this concept in mind, decided that the house had to be part of the landscape, be something like a shelter or underground bunker. And this is the impression given shelter at first glance, it seems buried in the dunes, although it is only an illusion. Barrie Marshal compared to a bomber or a spy plane, its quiet and rather intimidating appearance.

The privacy was most important for the architect and his family, and this is reflected in the choice of a style that is both severe and elegant, without mercy. This is a personal exercise of monumentality and containment conceived by Marshall for his family and friends, while a master on the findings, which show that the severity of style does not have to rule out the richness of architectural experience exercise.

The building in no way connotes residence or domesticity. In context, it hides like a Stealth bomber, hidden and subversive.

Upon arrival, visitors are led through a narrow slit in the eastern part of the hidden externally by what appears to be a natural increase ground concrete perimeter wall, but in reality is an artificial mound, arriving at a playground rectangular lawn that also serves as parking. Open to the sky, but effectively protected from the wind and glare, there is no pretense in space, adorned only concrete panels on three sides with natural bushland on top. The house, which is the fourth side of the square, has a similar surface of concrete, broken window openings seemingly devoid of frames. The masonry here is marked by deep grooves shaped disc, found in the concrete blocks, style Kahn or Ando. These create a grid pattern that only occasionally coordinates with window openings. The idea has Marshall geometry is aesthetic and fluid than insistently as not predetermine the position of all the surface elements.

The ramps formed by the dunes reach the ceiling height on three sides, the landscape extends and continues on the roof of the house, the covers and descends to reach the ground.

The house is a long thin concrete box, black inside and out, caught between two long walls, the same height as the perimeter walls, three meters, forming the edge of a square courtyard, sunk into the dune, the home is a simple long rectangle. Barri Marshall describes this house on one level as a “building under quiet and elemental.”

The kitchen – dining room is devoid of accessories other than a couple of benches in stainless steel. But not the environment is harsh or quasi-industrial, surfaces and drawers are meticulously detailed, especially the delicate shapes of thin handles. A steel cabinet also contains the refrigerator on wheels.

In the lift opens to the ocean, the windows are sized and positioned within each room to frame the landscape opens to the sea, like a box it were, determining the proportions and locations thereof as these internal considerations.

The overlooking the courtyard on the north facade, are few and small, to protect from sun and wind. The small “windows penguin” so named by the partner of Marshall, John Denton, walking along the west facade of the house, allowing light to enter from the courtyard, but without a direct view on it. The patio offers protection against wind and concentrates the sun during the winter.

The drain outlets cover are inserted into small triangular cuts drafts in the concrete and the only detail a bit casual construction constitutes vent home located in the living room, projecting leaning over the side of the cover.

The house responds incredibly well to the movement of the sun throughout the day and the rooms are illuminated by sharp shards of light, while other areas remain in the shadows.

Once through the entrance between two walls covered by dunes and grass you access to a rectangular space, three retaining walls and a fourth side created by the house, is one of the most emblematic of the house spaces, covered patio lawn although it is not easy to determine what their function. Sometimes serves as parking, although his mission seems more ceremonial than functional, as in ancient sacred precincts.

Just off the entrance gap three openings indicate the existence of a large garage and a warehouse. On the south wall, the left side, projecting a vertical galvanized steel screen indicating the main entrance to the house.

The house itself is contained between the southern wall of the courtyard and the other parallel wall that faces the sea on one floor. One end of this wall is buried in the sand, while the other forms a tapered wall containment. Grass grows above the house reinforces the illusion of retaining wall.

In the courtyard, a screen of galvanized steel that goes into the esplanade directs the visitor to the front door. To the left a large window suggests the landscape of the nearby ocean. At one end of the long concrete box the living room is located, in the other the master suite and along the strip of movement, by the side of the courtyard, two bedrooms and two bathrooms are located.

Between the beginning of this corridor of movement and the living room a more spacious room houses the kitchen and the main entrance. Once inside the dining room, at an angle, a fireplace funnel-shaped vent oriented towards the top of the roof between the scrub deck. This part of the house has a sort of platform to the garden that gives breadth to stay, while with respect to the front line facing the sea, giving rise to a porch retracts. From the kitchen, a revolving door gives access to the living room, which occupies the west end of the house.

This area of ​​the Australian coastline is dotted with houses of fiber, many raised on slender piles to see the sea over the dunes. Marshal House rejects this tradition of lightweight construction and presents an alternative to the beach house approach.

Built entirely in black galvanized steel and reinforced concrete in situ, the house is nothing temporary and improvised nature of the typical summer home. Marshall designed the house for his family as a solid construction that not only embraces the earth, but actually is hidden inside, as if to seek shelter from the elements, achieving with this device that the house is indeed hidden sight.

The floors are polished black terrazzo and the walls and unpainted steel doors, all elements that do nothing but accentuate the austere and serious nature of the house but they achieve an effect of unexpected lightness capture and filtering external light.

As in the work of Kahn or Ando, ​​vertical joints work have been carefully worked and placement highlight the round marks in the meeting of the concrete blocks.

Upon entering the kitchen – dining room, the visitor is immediately struck by nature, suddenly there is a dazzling panorama of rocks, sand and sea. Unlike concrete panels covered square in front of the grass, the far side of the house opens into a series of glass panels, fixed, sliding or lamas, some retreat after a colonnade protection.

The dunes that protect the house, they are actually willing artificial embankments against the concrete walls that form the square courtyard. 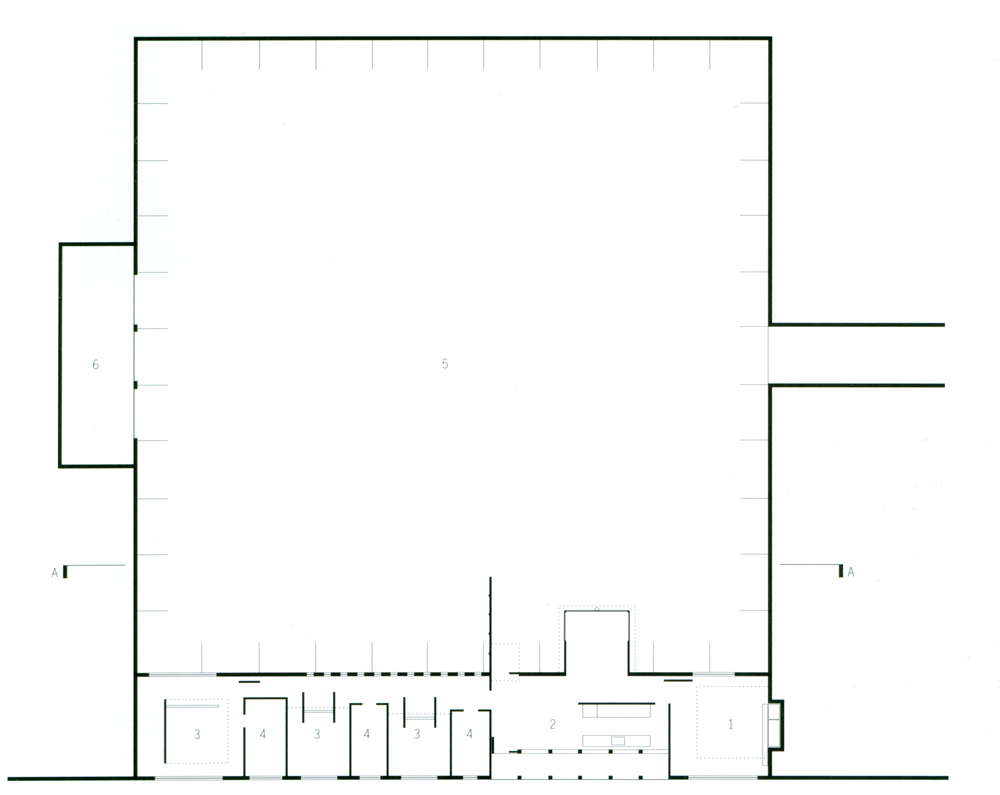 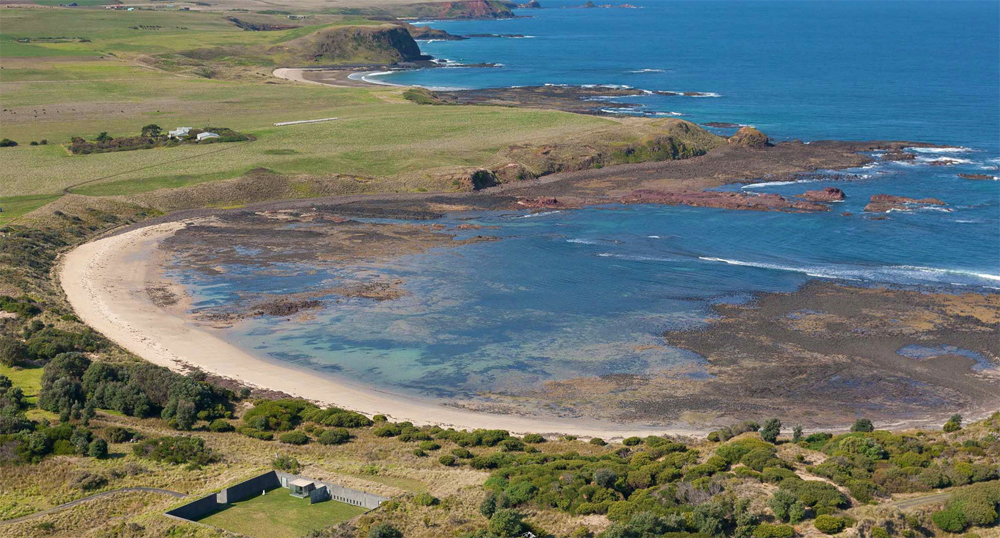 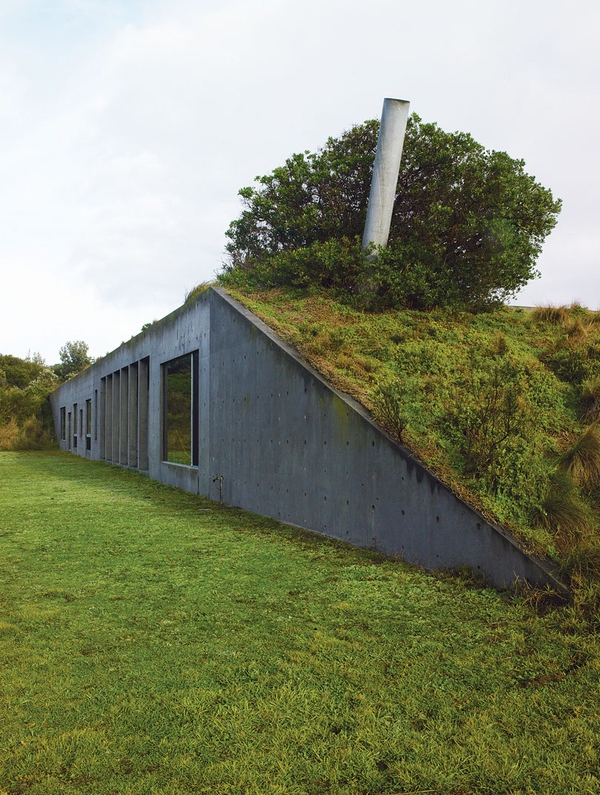 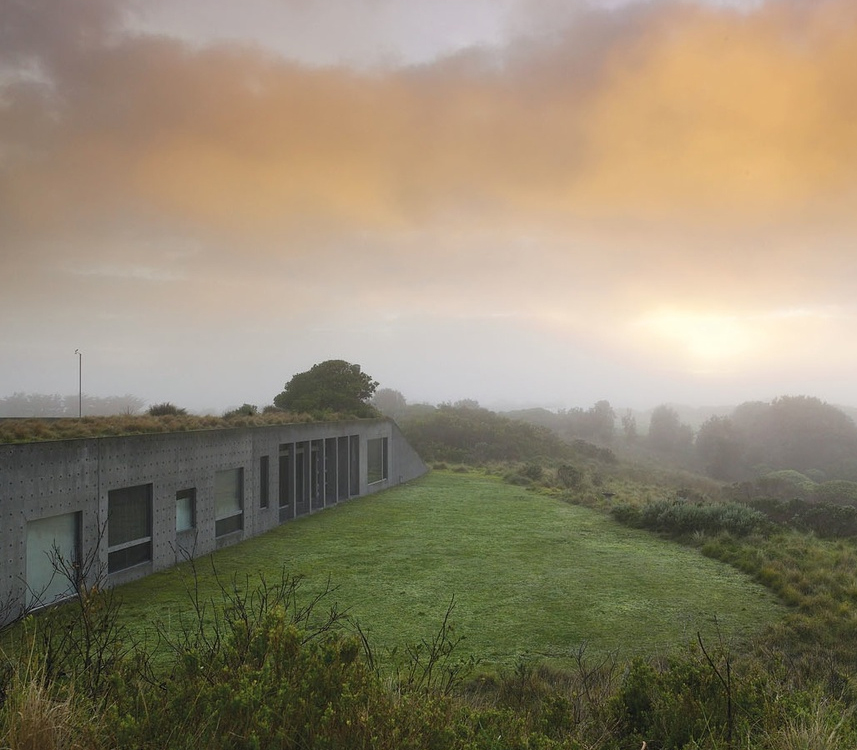 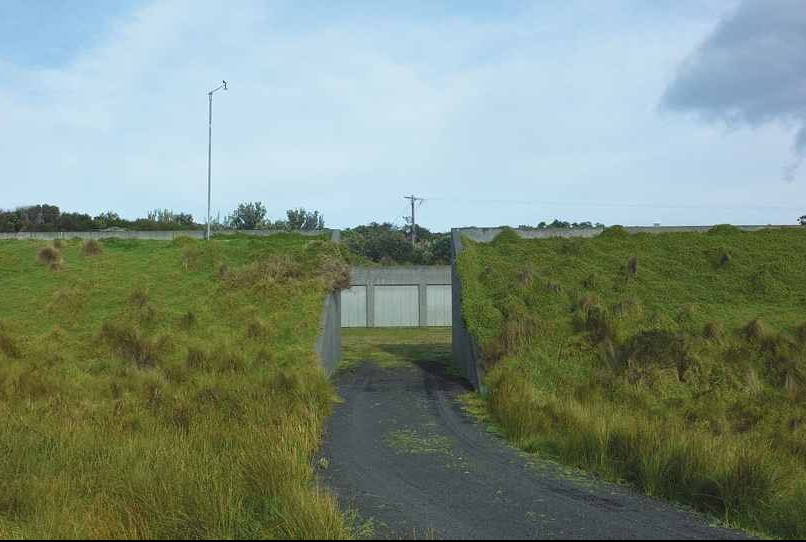 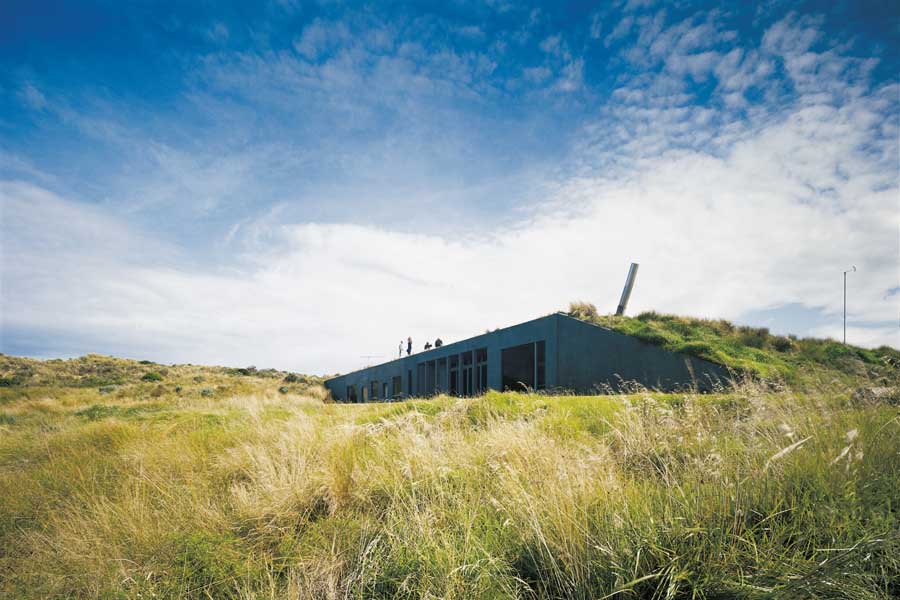 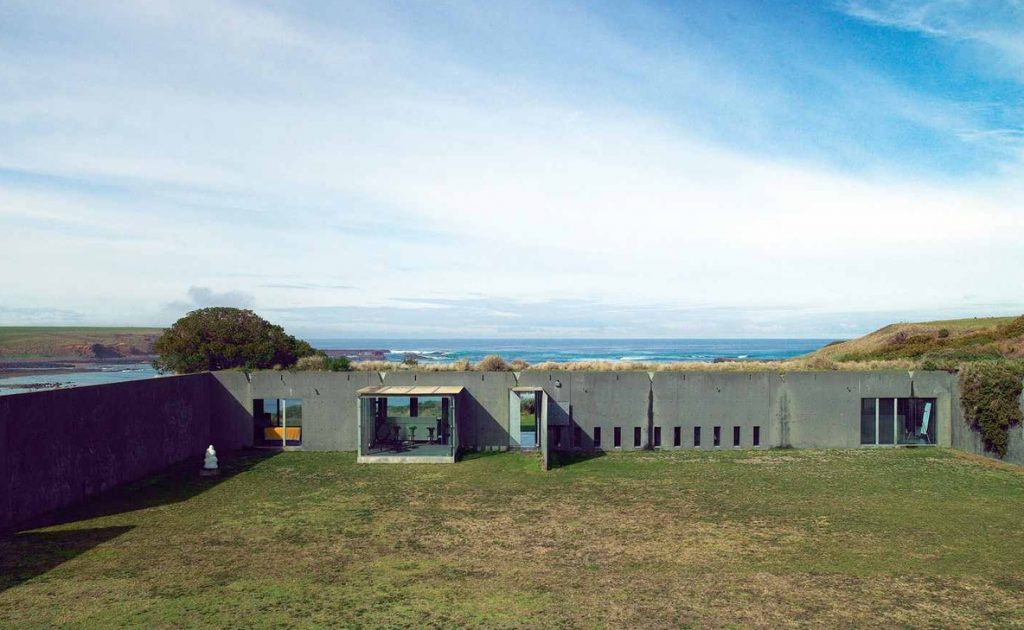 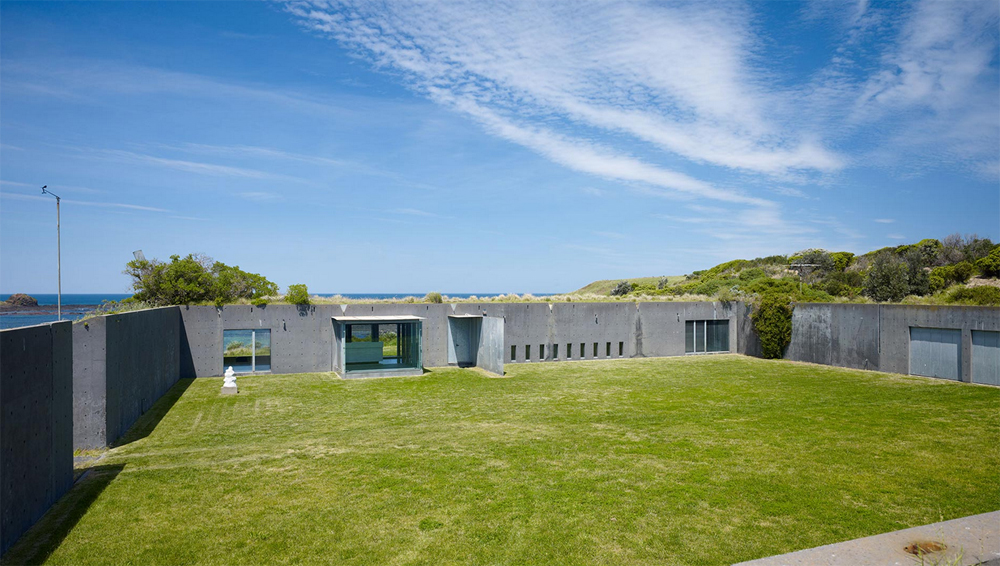 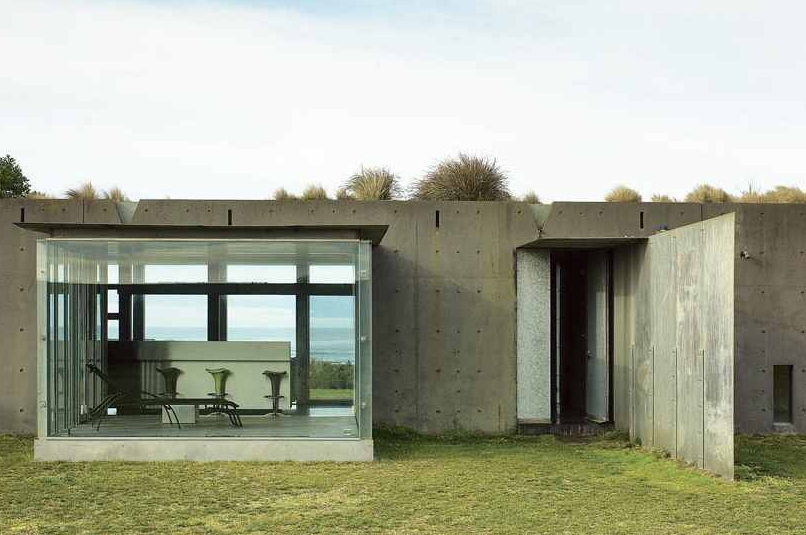 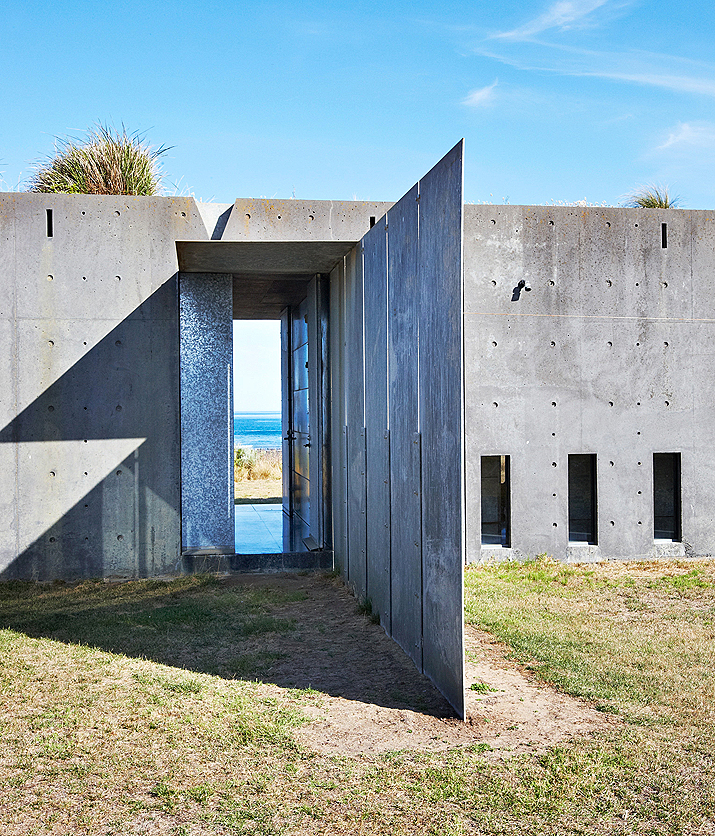 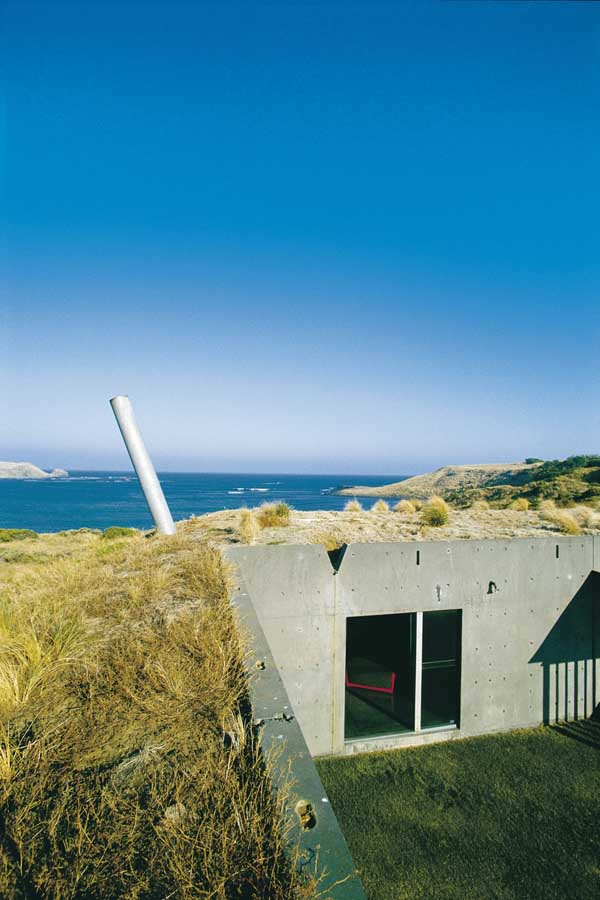 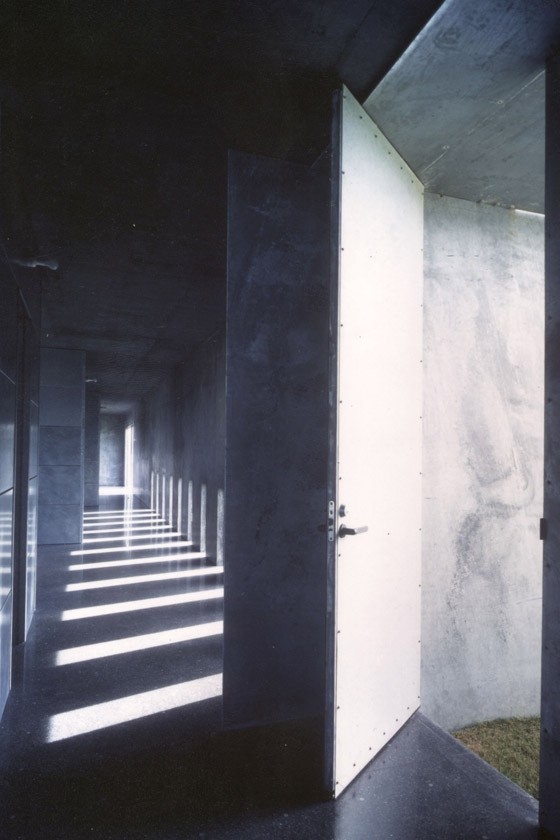 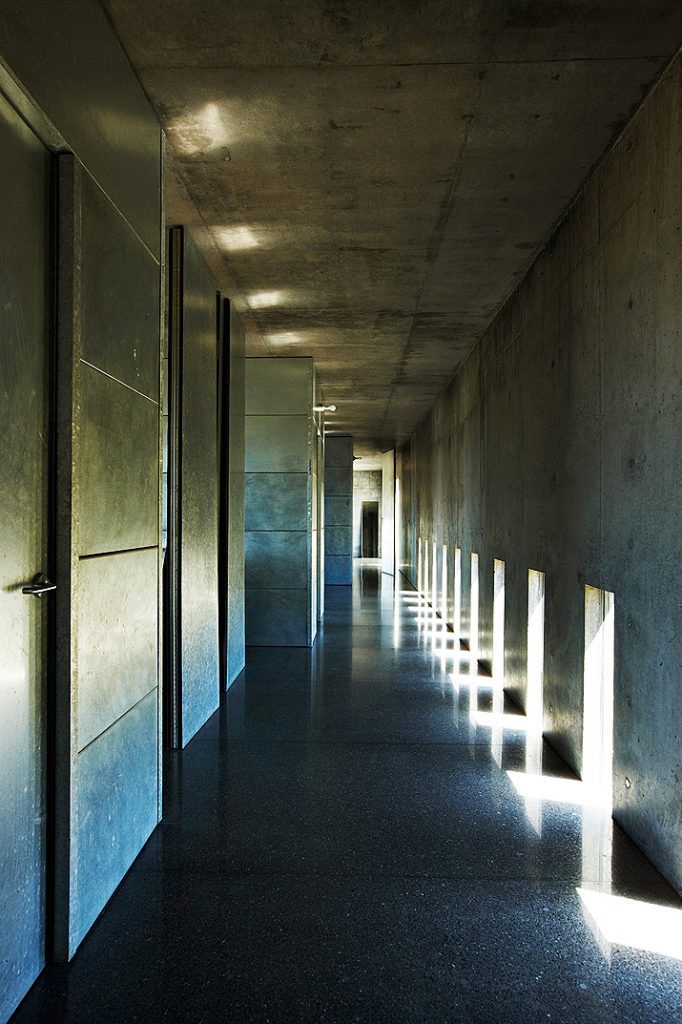 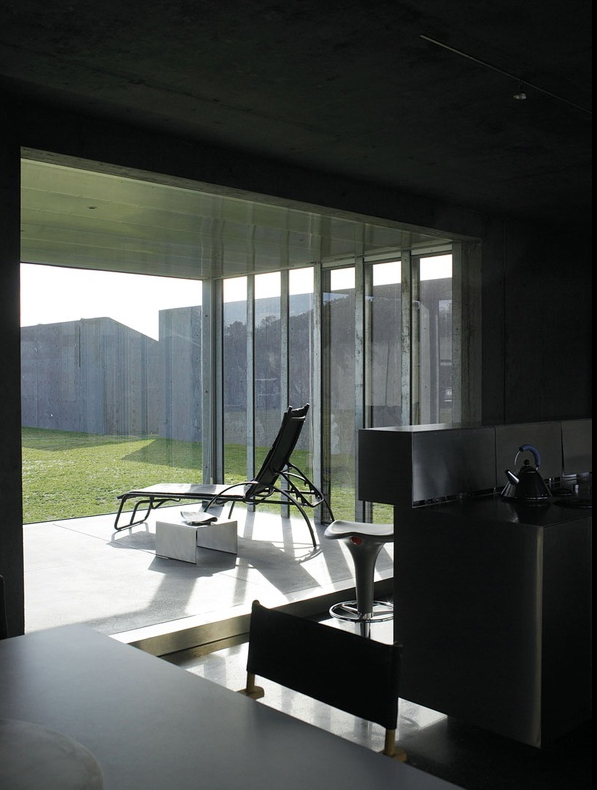 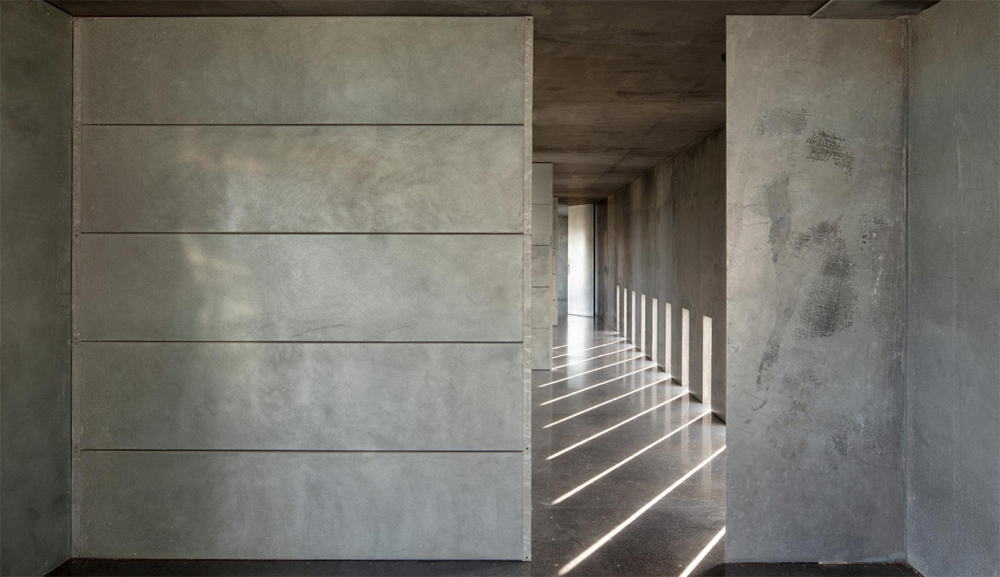 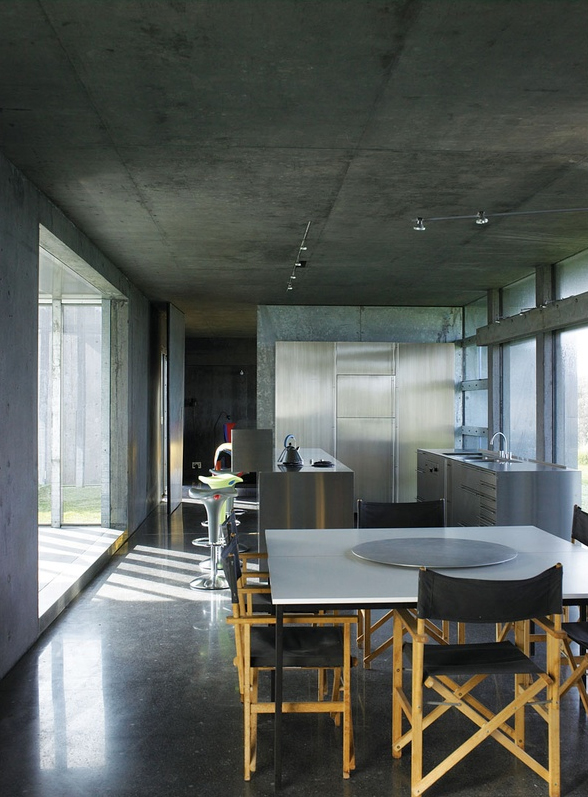 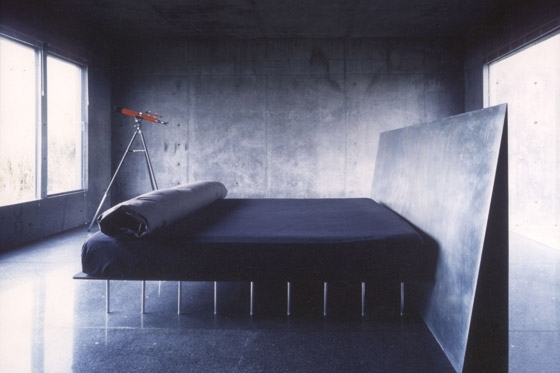