A couple of friends of the study bak Architects for which the firm already had planned a weekend house in Park Leloir, Ituzaingo, many years ago, they were again consulted to decide the purchase of a lot in Mapuche, Pillar, to make a work in the same order as above.

The commission’s own count as architects:

I would like to carry the home of the new batch Park Leloir said our friend. I am still enjoying very much, he added, while the two were showing us that they liked some elements of the houses in the country: sloping roofs, windows framed in plaster for the walls that separate containing wooden cross rails, and so on. We suggest: that, let us return to surprise them as we did a few years ago.

Thus began the “class of architecture for customers,” additional teaching task to those of a commission that we always try to carry out, because although a lot of energy demand, the result allows us to live our profession with joy and customers are grateful for having led down a path that did not have access.

The program was pretty easy to develop as they knew their way of life from the previous draft, simply identify who needed three bedrooms, a generous rather than with fireplace, a dining integrated, a small kitchen and a covered gallery that included grilled, everything on the ground floor if possible. The requirements aesthetic-building after several classes in the studio and on the street “were more or less well:” We do not want concrete in sight, we prefer a more traditional end, we like the large windows that we relate to the outside, we would like a sloping roof where the light from above.

Regarding the budget should work with standard values, and construction could average as 140 m2.

Pilar is an area on the outskirts of the capital of Argentina in Buenos Aires where in the past few years have spread the “Countries” (Suburbia private security). They city dwellers looking to escape the economic chaos of one of the largest cities in the world in a natural environment, quiet and above all safe.

The reference site is not a new country and the years he had joined the value of a splendid tree planting, so the architects agreed with his friends that the election was very successful. Among the lots to recommend them traveled with a single row of conifers on the front, a number of fruit trees should be placed where unfortunately the house for regulatory reasons, two aged blue cedars near the main mediator, roughly in the middle of the lot and a swimming pool located well. -The orientation of the lot is at the bottom with NO, so that the cedars cover much of the sun in the afternoon and conifers at SE not throw shadow on the house. The lot is super-dijieron them.

The architects suggested in principle a minimum adequacy of the program: that the third bedroom could be integrated dining sector and that such use would be required only occasionally. And with regard to the constraints of the form, asked to be some variant no longer submit to the sloping roof that does not resign of course to the requirements of entry of light.

Whenever we face each new assignment as an opportunity for research in the field of theoretical and practical understanding of the architecture, are the architects. For this (client, place, agenda, budget) we thought it appropriate to further elaborate on the issue of inclusion of small courtyards within the plant, as it had done in previous works, because it was very interesting result as these patios add to the premises adjacent providing a broader sense, an atmosphere by changing the effects of light entering through them and a view of the surrounding landscape from the most diverse corners of the plant.

They then proposed a house settled on the ground floor as a prism simple perforated by a small courtyard, with a flat deck that rises in two sections of the plant to let in light and make more evident the presence of the landscape. The casing is continued in two side walls to touch the floor, separated from the main mediator 3m with a few holes to avoid hearings to neighbors.

Both the front and the back are resolved with alternating panels of glass and wood quebracho. Caring for the position towards the front of the open panels to be shielded from the gaze of neighbors, either because they are low and will be hidden behind bushes, or because they are high, making it impossible to see inside from the street. The quebracho strong presence abroad is also a player like enclosure on the inside and as the allowance that covers one side of the plant, solving Filed furniture, fireplace, table and grill in the gallery. This material was specially chosen for their hardiness to contrast with the pure lines, elementary and abstract from the rest of the house.

The prism is landed on the ground, about 20cm high and linked to the outdoor (parking facilities, pool and solarium) with sleepers quebracho buried in the grass.

Relationship with the Light and Landscape

The position and size of the openings are more works in our relationship with the cut in the landscape (urban or natural) that we want to emphasize that the role of front element of composition is often attributed. So for this play where there would be studied carefully by both the queue of light as the landscape, so that the notes were walking toward the house may be surprised, in some cases looking down on others facing upwards through narrow Large cracks or holes. In connection with the artificial light was sought to emphasize the indeterminacy of the main area of the house, with luminous devices that allow changing the direction of the light and its light intensity and illumination in the place where Slips sliver by the light of day.

The size resolve simple functions around the small courtyard and are reserved only for the look of that access to housing two bedrooms and bathrooms. The kitchen is suggested but not displayed and the gallery is incorporated as an environment of the plant. They are accessed through a prism undermined by a gate across the height of the house concealed in a piece of wood quebracho.

The floor of the house, 14.00mx 10.80m, is covered by a slab of reinforced concrete beams with inverted around its perimeter, which hide the subfloor slope and water-repellent membrane. This slab rests on its side is a double masonry wall with air chamber and the NE side on a concrete wall through which to allow deck and bulkhead are separated to allow the entry of light across zenith its length and that ventilation ducts of the fireplace and barbecue are hidden. At the center of the slab were arranged in columns sections of iron as a modular grid. These columns were screened for metallic section minimum, in order to integrate them and disappear, aligned with the openings.

The exterior walls were completed compared to color-coated sand. The interior walls of hollow bricks removed and painted with white latex. The ceiling plaster was applied colored sand painting. The floors are made of wood in the bedrooms and in the areas and dining, glazed ceramic in kitchen, gallery, patio and access. The bathrooms are clad in travertine marble with some details of venecita ceramic. The vents are harmless aluminum bronze with dark glasses with air chamber. The heat is on the floor. The kitchen furniture is lacquered white.

Furniture specially designed for such housing were made with pine Canadian recovered, from crates of engines. 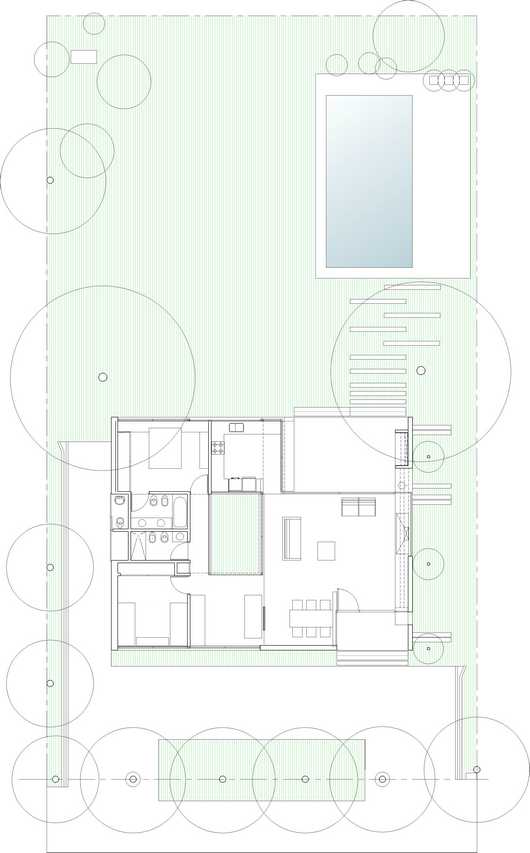 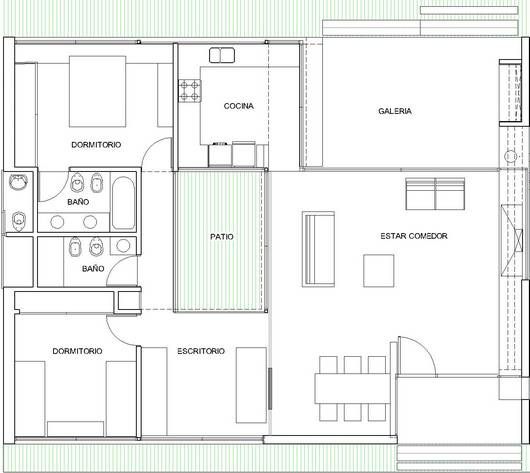 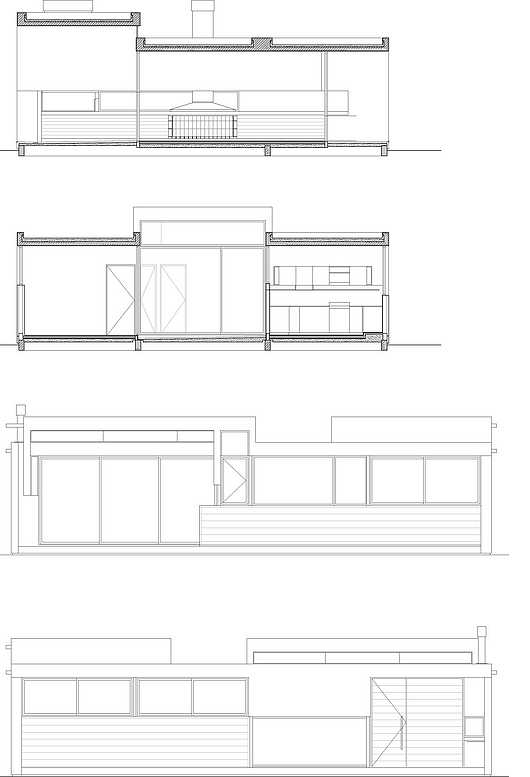 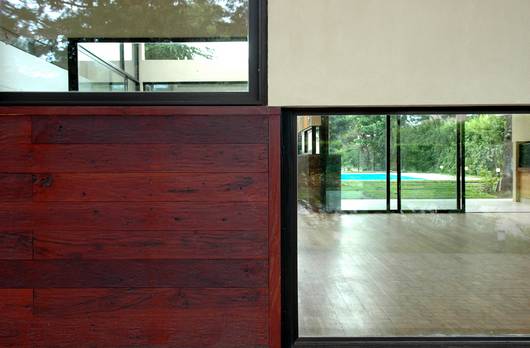 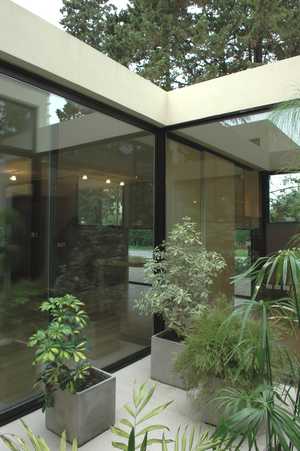 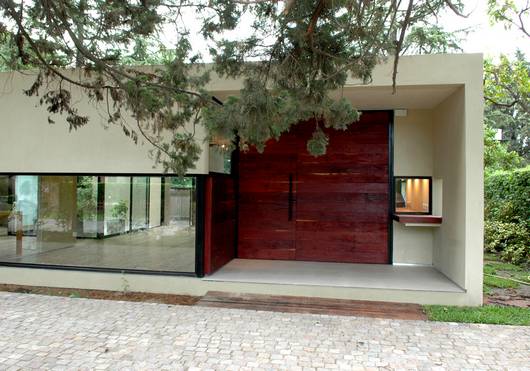 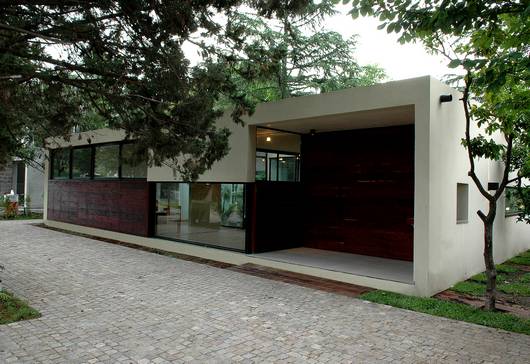 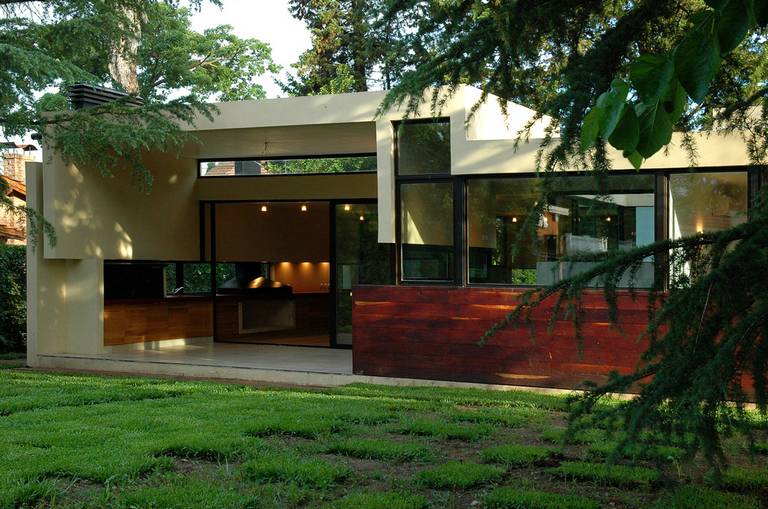 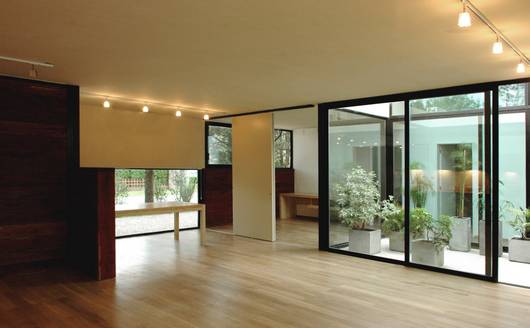 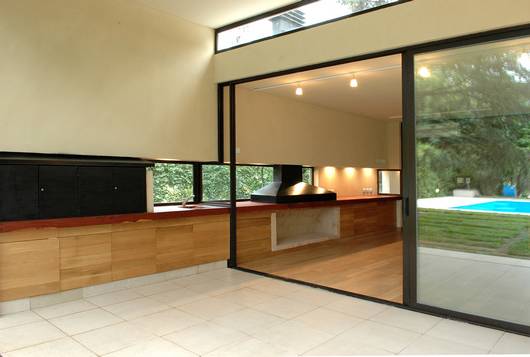 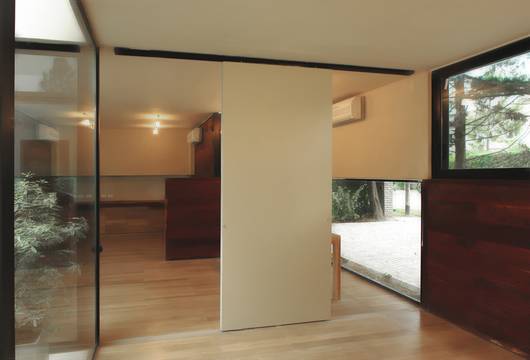 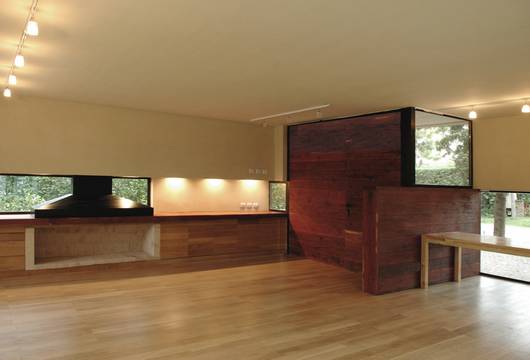 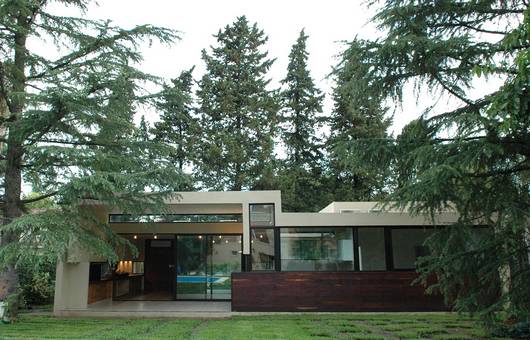 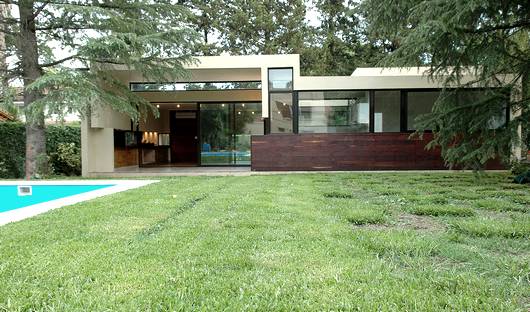 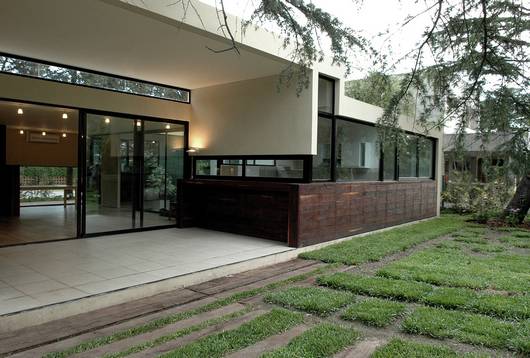 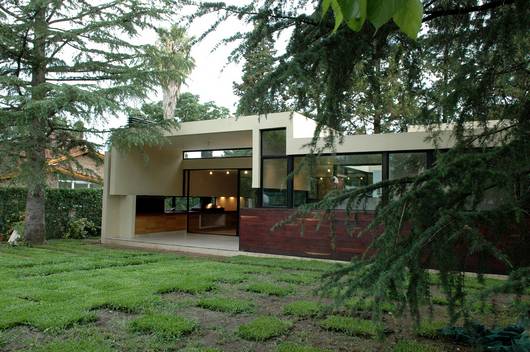 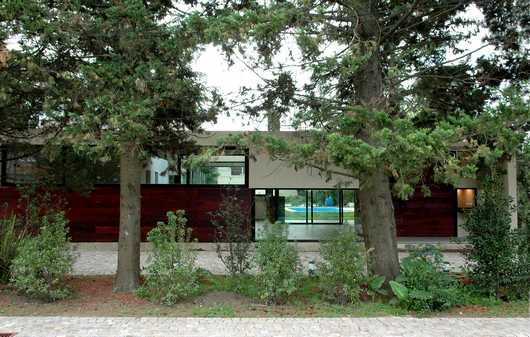 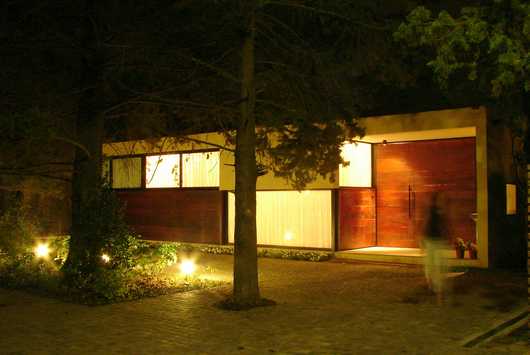