The Manhattan Building shared the title of being the first 16-story building in the world with Burnham & Root’s Monadnock Building, also located on Dearborn just two blocks north of the Manhattan. The site posed two new structural problems for Jenney to resolve. It was slated to be erected on the portion of Dearborn that had just recently been opened up to Polk Street, and the width of the lot had been correspondingly reduced by the construction of Plymouth Place on the western edge of its site. This had reduced the width of the lots from 100’ to 68.’ The combination of the shallow depth of the site and the planned height of over 200′ concerned Jenney about the potential deflection caused by the wind that he had to respond by stiffening the building’s interior structure against wind loads.

The Manhattan building is located in Chicago: Northeast corner of Dearborn and Congress Parkway.

The Manhattan elevations suffer from having no central idea or concept, and at the same time, too many conflicting details. Here is Jenney’s predilection to break a building into a stack of horizontal layers at its worst. While his earlier designs had arrived at an appropriate design solution for a building that would eventually have more floors added at a later date, he faced no such challenge, however, with the Manhattan. He, therefore, had simply fallen back on what he knew to do best: break an elevation of a tall building into a number of horizontal layers. But the Manhattan Building was to have sixteen stories and was also, by design, to be stepped back at the tenth floor.

Either of these requirements could provide a viable concept around which an architect could develop an elevational scheme. So one might try to articulate the vertical dimension in its elevations. In fact, even in the final design there are pilasters that read as nine stories tall; but there was simply no way of masking sixteen floors. He could also have formally emphasized the stepback at the tenth floor by consciously giving the elevation a lower nine-story base upon which the seven-story upper block was placed. Unfortunately, Jenney appears to have tried to do both, and in doing so, accomplished neither.

Trying to give him the benefit of the doubt, one could describe his design as an attempt to reduce the building’s gargantuan, completely out-of-the-character of the neighborhood height by applying continuous lines of horizontal emphasis in such a manner to prevent the eyes from perceiving the true vertical dimension of 210.’

The Manhattan Building was not predestined to suffer such a garish, unsophisticated visage merely because it was the first 16-story skyscraper, for John Root’s final design of the Monadnock disproves this argument at first glance. In fact, the seeds of a well-designed elevation were in place in Jenney’s final elevation. If one squints at the Manhattan’s elevation, one sees that Jenney employed two different widths of pilasters to cover the cast iron columns. I will label the wider of the two, A; the narrower of the two, B. Reading across the façade, one finds the rhythm of A-A-B-A-B-B-A-B-A-A.

Jenney had broken the vertical layering of the wall into the conventional scheme of using the heavier pilasters at the corners and to frame the entrance bays. Because of the stepback, there is a second set of corner pilasters in the lower base, as the upper block corner pilasters continue into the lower base. Had he simply reinforced this rhythm without the abrupt interruption of the heavy cornice at the thirteenth floor, the building’s design would have been much better.

An alternative scheme to this one that would have emphasized the building’s 16-story center, would have been to detail the setback upper block as a separate volume that simply sat on the lower nine-story base. Either of these schemes would have had an architectonic or conceptual logic that the final, constructed elevation of the Manhattan Building sorely does not. The visual cacophony of the Manhattan’s elevations was then completed with a decorative addition of corbelled brackets at the base of the three center bay windows. And just to complete this tasteless addition, these were positioned one floor above the base of the flanking bay windows. To use a then au courant term, the Manhattan Building seemed to represent “parvenu” aesthetics at its worse. Or to employ a more contemporary phrase, “More is not always better.”

Jenney simply was “out of his league” in trying to design such a tall building.

In addition to the narrowness of its site, it also had existing seven-story buildings on both the north and the south property lines.   The existing masonry party walls of both adjacent buildings could not be increased to the new height planned for the Manhattan, as they would need to be extended an additional eight stories.  The added weight of these floors would naturally have required the foundation of the existing walls to be increased, meaning that the basements of both buildings would have to be vacated for a number of months to allow the construction of underpinning to allow the foundations to be enlarged. Jenney, concerned over these unique engineering problems hired engineer Louis E. Ritter to help design the building’s structure. The two of them decided to employ the cantilever to carry the loads of their new party wall away from the existing wall’s foundation to a new foundation set safely within the Manhattan’s lot. They avoided the extreme cost of the large transfer beam and the corresponding loss of space in the basement by cantilevering each floor out to the party wall.

As Jenney deemed that steel was expensive to use, the columns were cast iron and the beams were wrought iron. He cantilevered each floor with double girders that spanned from the second column line in from the wall, over the first column line, which acted as a fulcrum, and ended in midair at the party wall. At this point, he constructed the new party wall with two wythes of 12” thick hollow tiles. Even though the existing building’s walls stopped at the Manhattan’s ninth floor, Jenney extended his wall one more story to the new tenth floor, which the cantilevered structure easily permitted. Jenney could have continued to do this for the upper six stories with no problem, if he needed to do so. The resulting exterior form, however, would have been a massive rectangular monolith. Instead, he stopped these upper floors at the first column line, that was the fulcrum for the cantilevers, and enclosed these stories with a wall of two wythes of 8” thick hollow tiles, the exterior wythe constructed with glazed tiles. This move created what would later be called a setback, or a stepback skyscraper. One can only surmise why this decision was made. Could it have been that it was more important to construct a record-breaking 16 stories, because the same amount of the building’s final floor area would have resulted if the cantilevered volume had been continued for only 14 stories. Or could it have been an overly cautious decision taken out of respect for the unknown wind loads on such an experimental structure to an unknown height, that had caused the building’s “sail area” to be prudently reduced?

Diagonal cross-bracing was located in the first line of columns in from both the north and south party walls, that were also the supports for the exterior walls in the upper six floors. These braces were not in every bay of these column lines, but only in the second bay in from both exterior street walls, where they could run continuously to the top of the sixteenth floor. The actual role of this bracing, however, has recently been called into question. First, the actual size of the braces was only a ¾” diameter iron rod with turnbuckles. This assembly simply is not sufficient in size to resist the magnitude of the forces generated by the wind on this size of structure. Second, when the Manhattan was being inspected for potential restoration, a number of these rods were found to have been removed at some earlier time, with no apparent effect on the building’s overall stability. Some of the removed braces had been located in the lower floors, which completely negated all rigidity provided by the bracing located above it. It was speculated in an interim study published by the Chicago Landmarks Council that the bracing was included to provide temporary bracing for only the ironwork during construction, until the building’s exterior masonry and floors were in place so as to give the building its permanent lateral rigidity. Carl Condit stated that lateral bracing was achieved through the rigid connections (known as portal bracing) made between the 15” deep wrought iron girders that were riveted along the entire depth of the web to an angle bolted to the cast iron columns.

While the existing party walls could not support any new gravity loads without resulting in major damage to the existing buildings, these walls could easily be used to resist the lateral loads on the new building if the new floors were tied into the existing party walls. This was, apparently, what was done, therefore, the Manhattan’s lateral stability was achieved through a combination of its exterior masonry, the existing party walls, the building’s floors, and most likely, the elevator core which is appropriately located in the exact center of the floor plan. (If one is a purist, therefore, it is incorrect to label the structure of the Manhattan Building as an all- iron skeleton frame, for it still relied on its walls for lateral stability.) 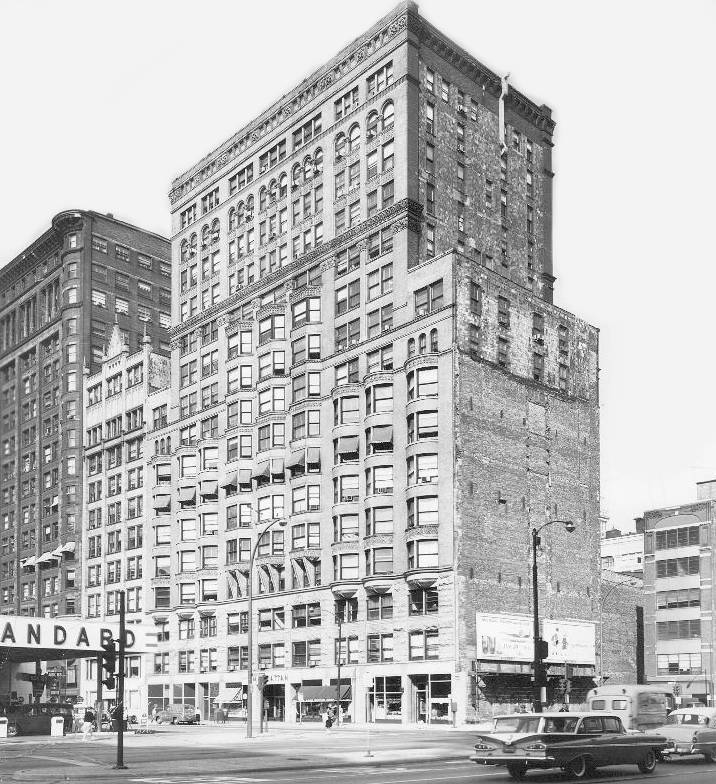 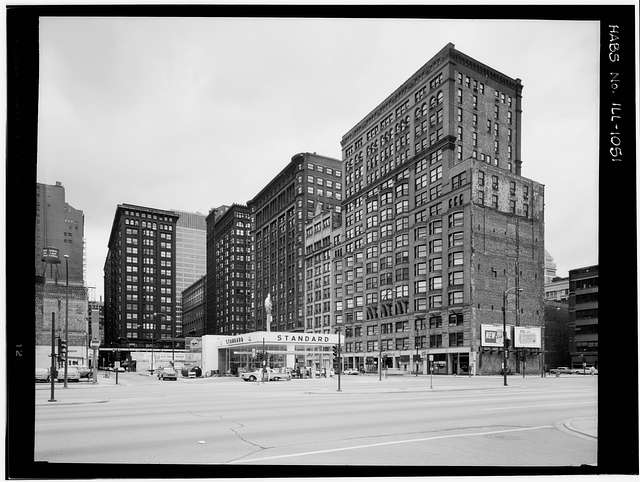 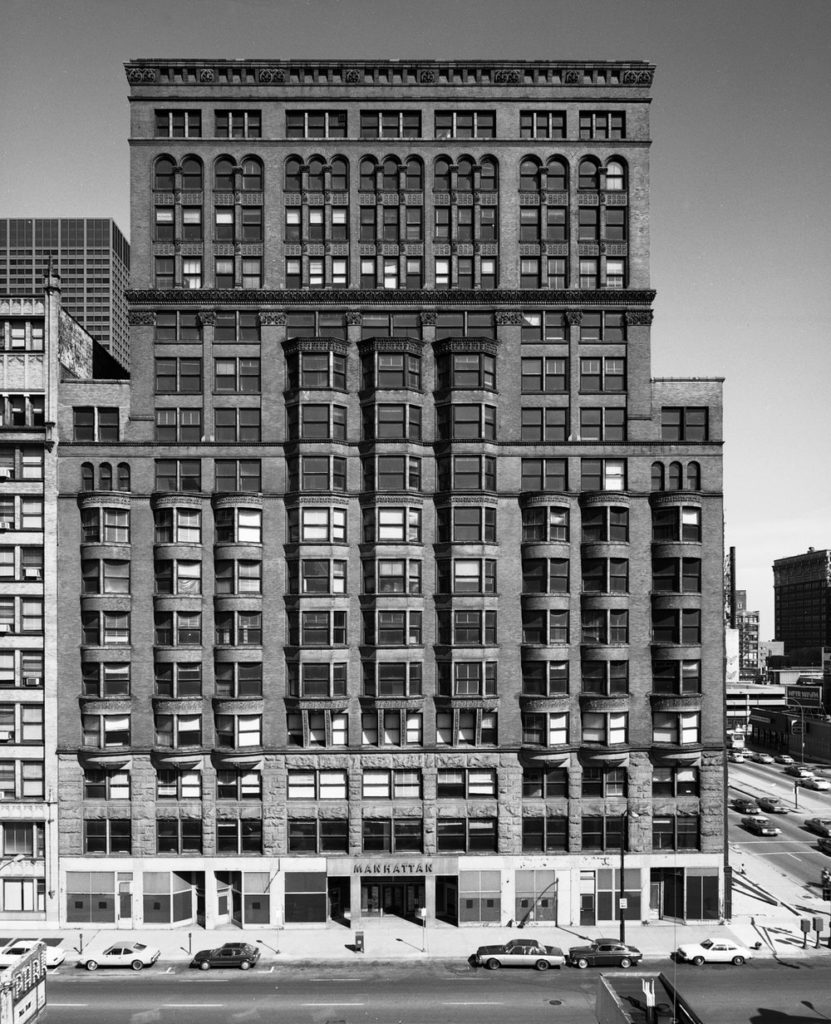 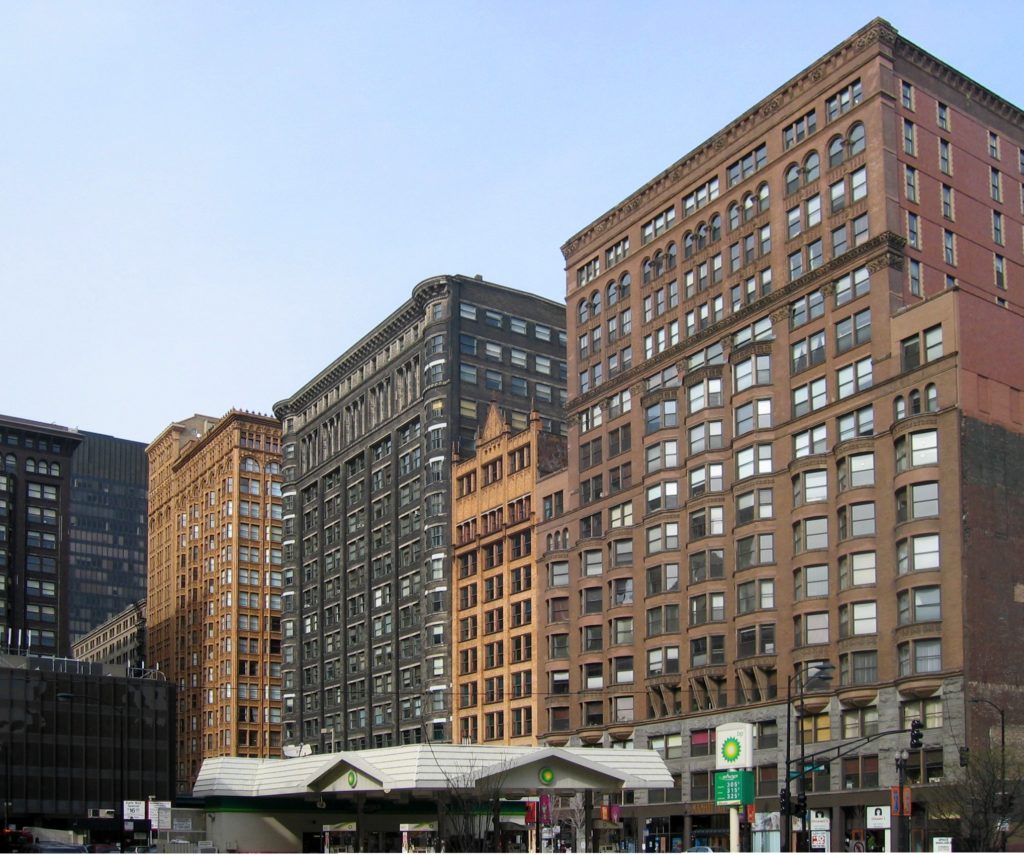 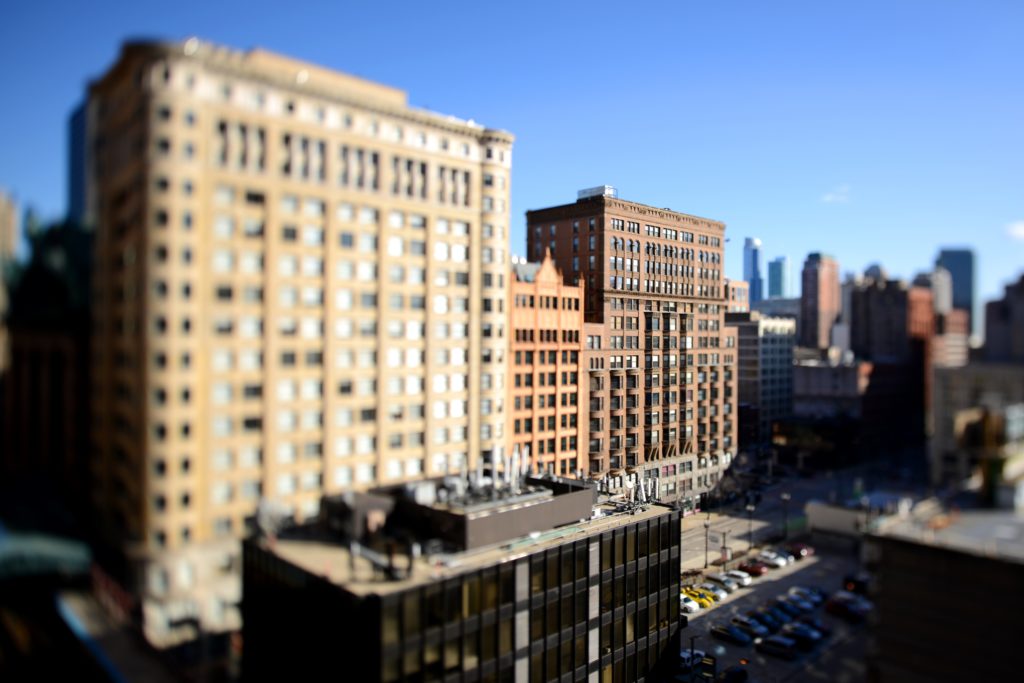 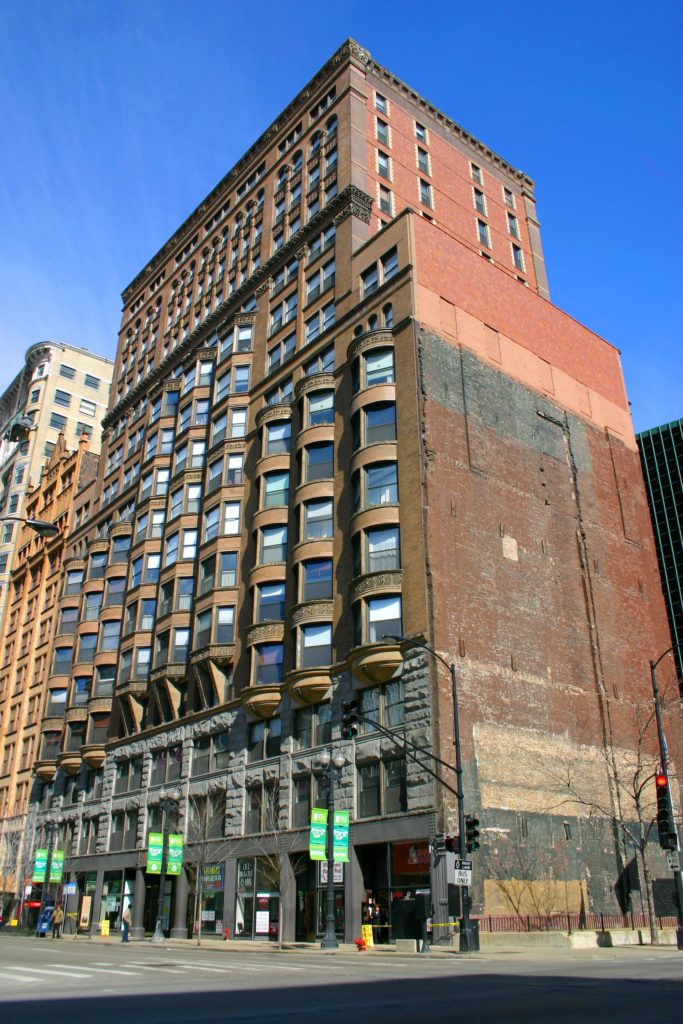 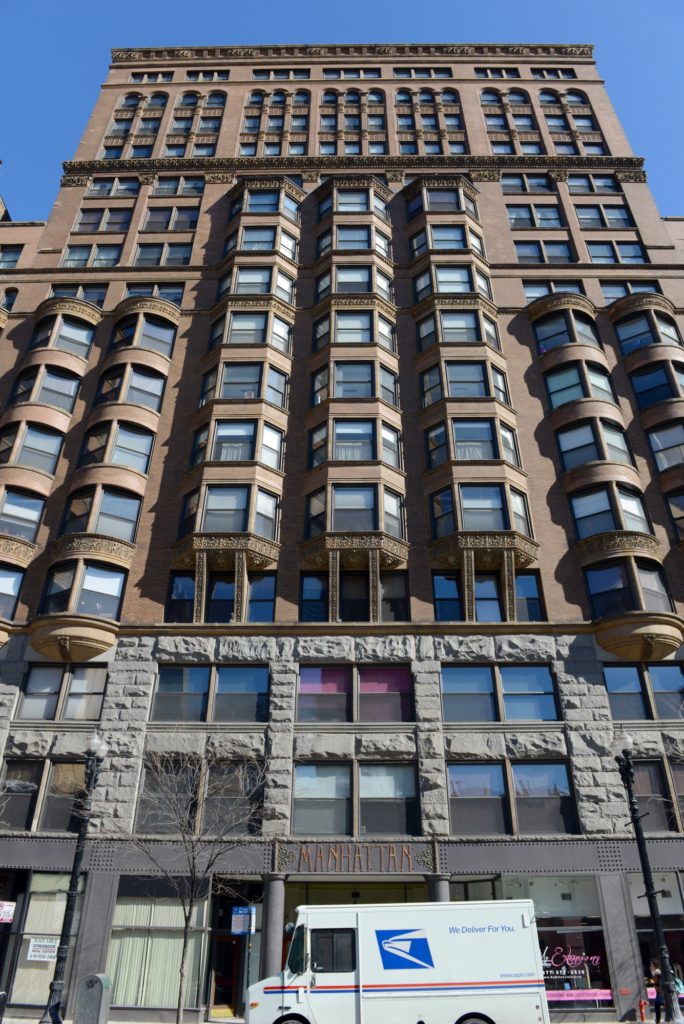 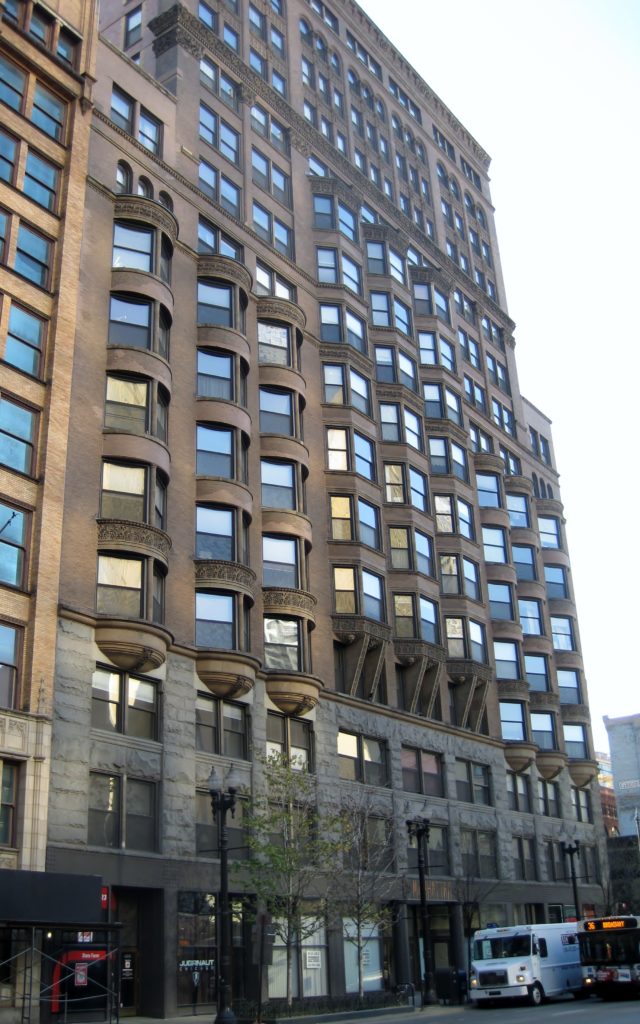 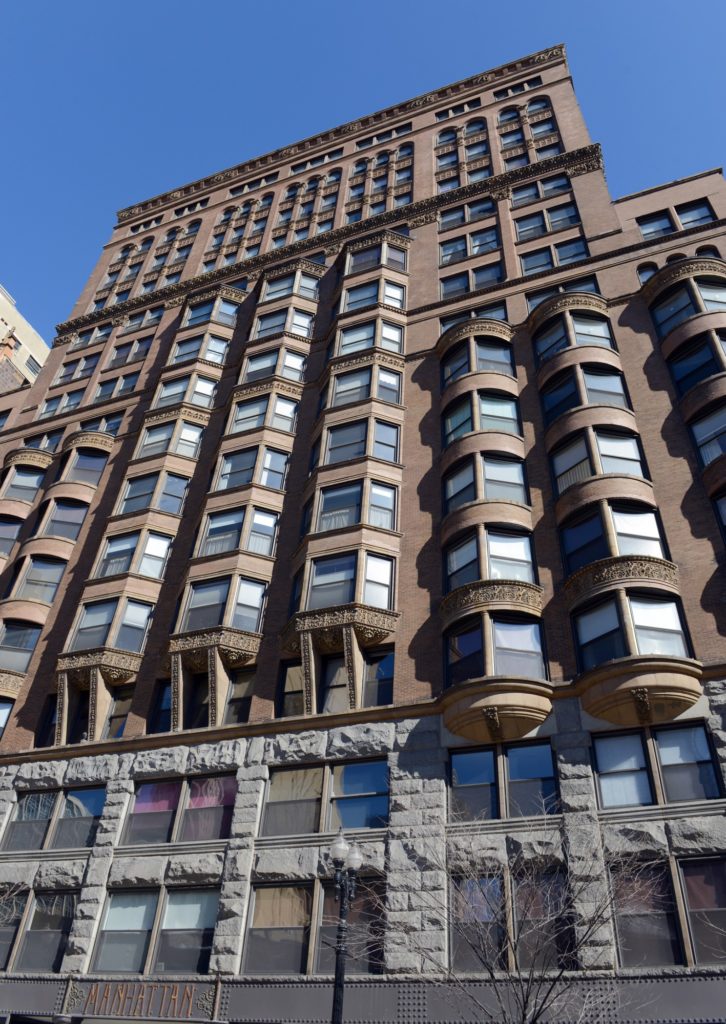 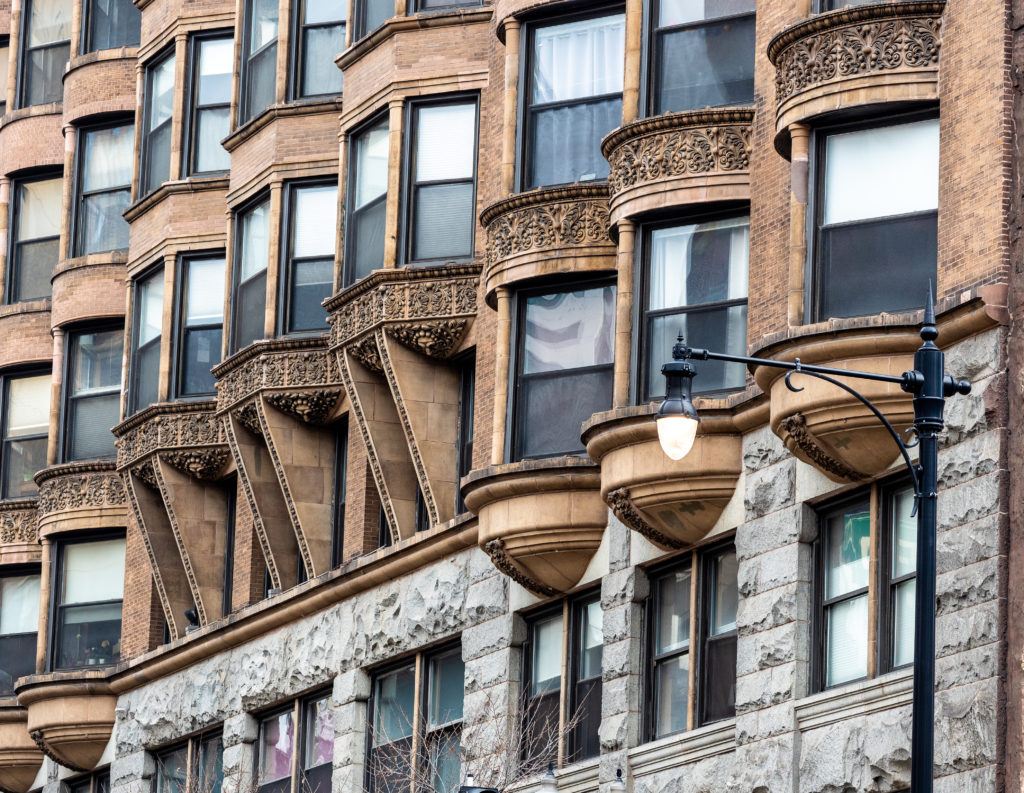 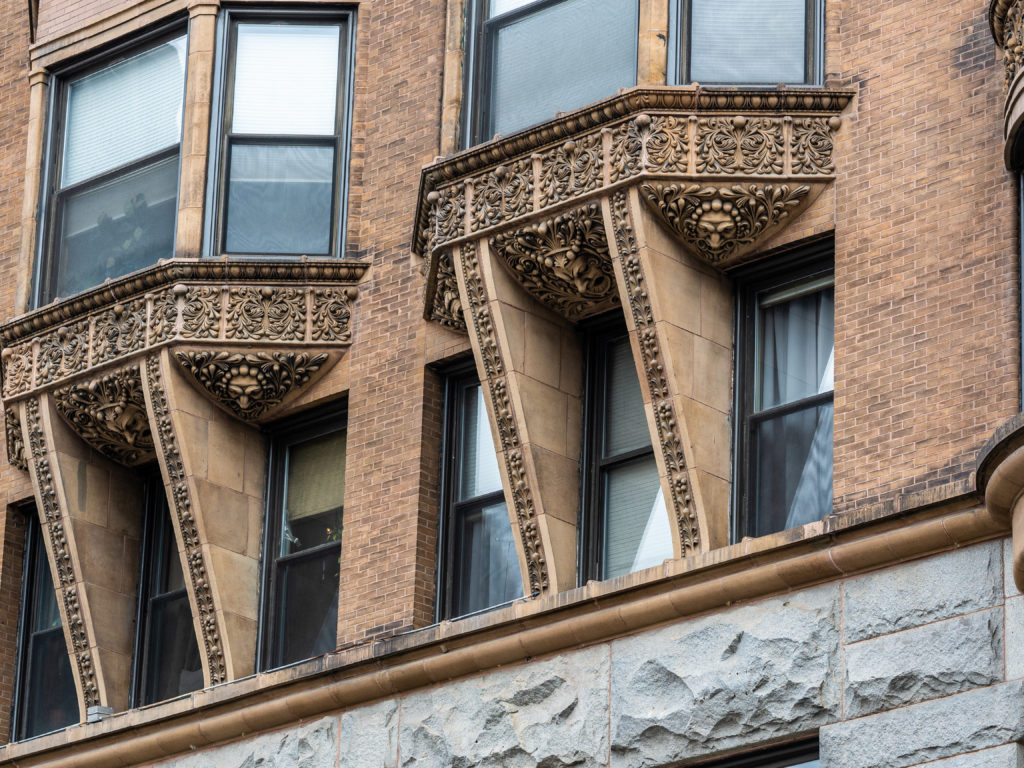 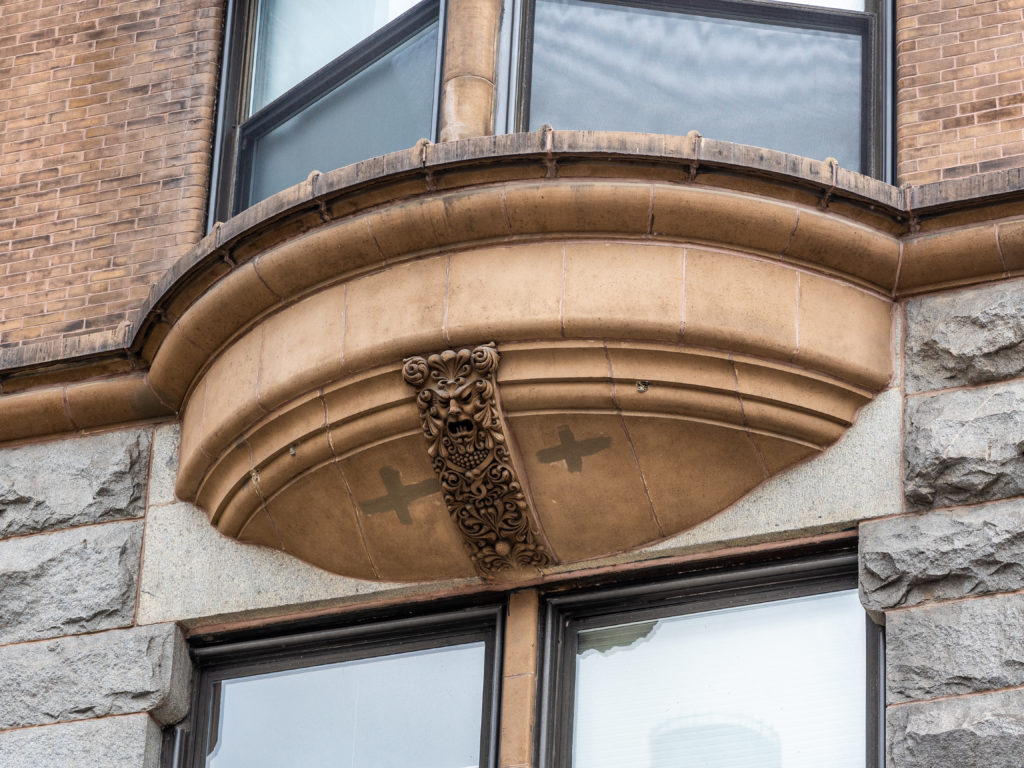 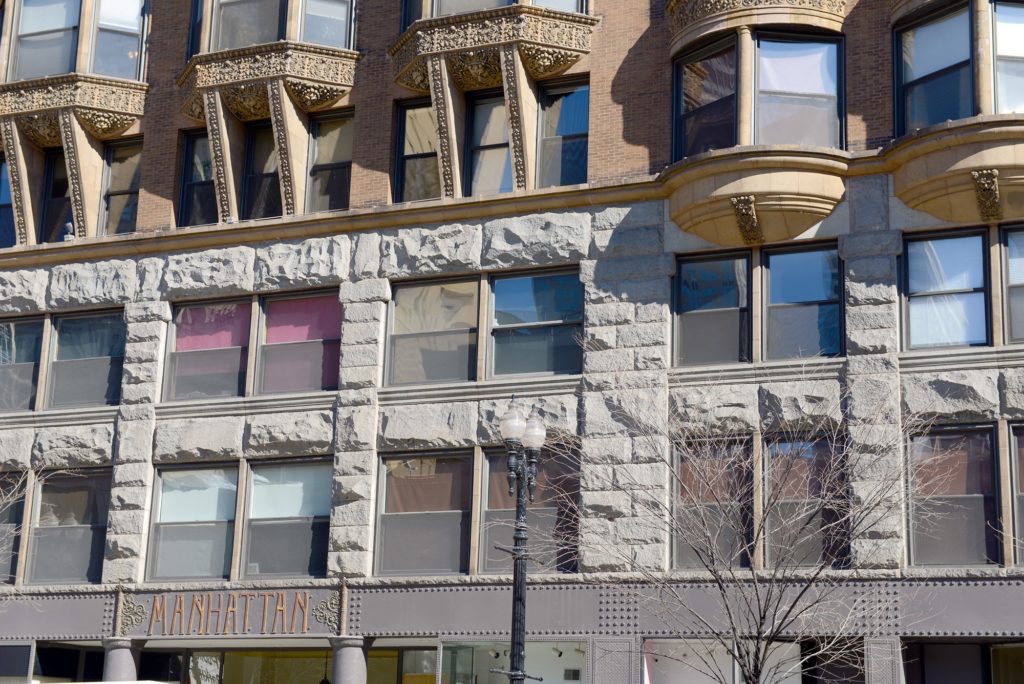 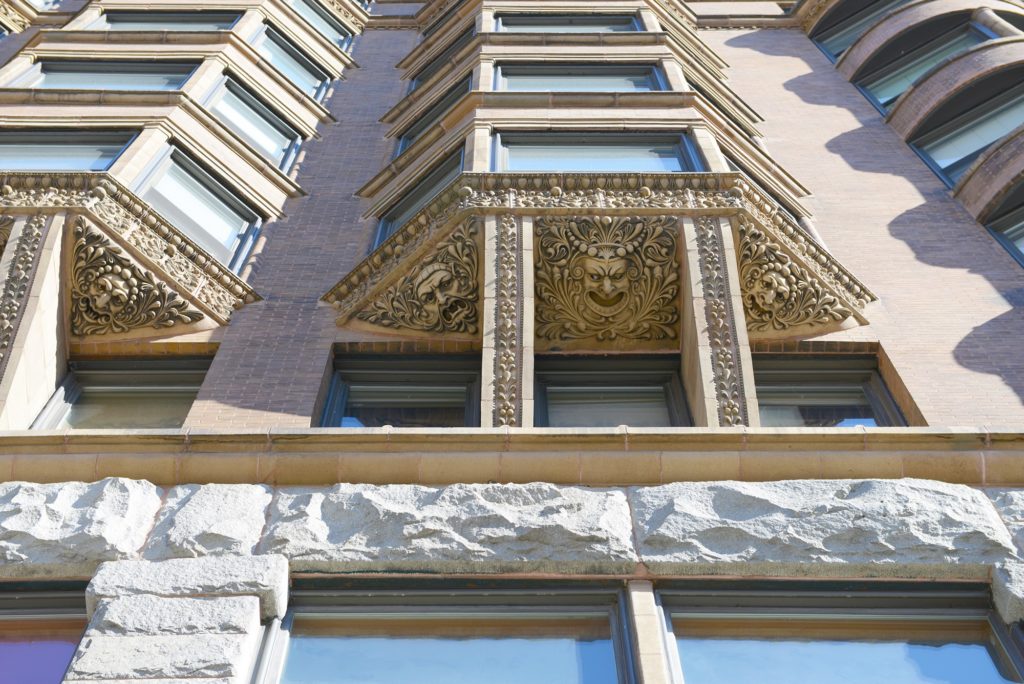