The Istana Budaya with its folds turquoise ceiling and intricate design of the lobby houses the National Theatre of Malaysia, Panggung Negara, also known as Cultural Centre Kuala Lumpur or Palace of Culture. This modern theater, a particular and sophisticated space for national and international events that has puzzled experts and scholars with its particular architecture, is rated as one of the top 10 theaters in the world, alongside the Royal Albert Hall in London.

Construction began in 1995 and was completed four years later, with an area of ​​21.000m² Istana Budaya was built as part of a cultural complex that occupies 54,400 m². The complex sits on a beautiful garden with pool, six holes of golf, a lake, indoor badminton court and tennis courts. For safety reasons, there is a guard house for members of the Royal Malay Regiment and the main entrance, as well as Buckingham Palace two guard posts on each side of the arch, with members of the cavalry wearing uniform gala.

The Palace of Culture is located at the junction of Jalan Tun Razak and Jalan Kuantan, at Jalan Tun Razak, near the National Gallery of Art and Lake Titiwangsa, Kuala Lumpur 50694, Malaysia.

The unique design of this Cultural Centre, Istana Budaya, was based on some Malay cultural aspects. Seen from above, the complex shape derives from cuts and placement of a traditional kite moon flight, “Wau Bulan Kelantan” carcterístico province of Kelantan, but also recalls a gigantic piece of origami.

The Malaysian architect Muhammad Kamar Ya’akub also echoed Malay traditions in the development of other concepts. For example in the main building, the plant takes the form of “sirih junjuung” traditional arrangement of betel leaves used in weddings and ceremonies of Malaysian welcome. Some critics see in structure reminiscences of the Sydney Opera House.

The building, like a malaca house is divided by functions into three sections: the lobby and foyer or “serambi” the audience, “Rumah Ibu” which literally translated means “house mother” and the kitchen or area work, “Rumah Dapur” which also serves as a stage and rehearsal.

Istana Budaya has facilities for wheelchairs, including a ramp in the lobby, an elevator with easy access to the keypad and designated for the disabled area. The sinks of all levels are also adapted.

Inspired by the steps of the picturesque houses “kampung”, the architect designed the steps leading to the main entrance, which was inspired by the Royal Court Malaya. Once you reach the end of the stairs is the box office. Lounges, located on both sides of the main room is designed to resemble a typical open spaces of the Malay houses in rural areas.

Under its traditional exterior, the building houses unique spaces, such as a theater, which they say is the most sophisticated in the world, with real boxes on each side, behind windows whose pattern responds to regional houses.

The entry foyer of this auditorium is a replica of the entrance hall of the royal palace or Balairong Seri. The lobby walls are decorated with six paintings by famous local artists, ranging from the lobby to the third floor and composition describes the legend of Princess Gunung Ledang.

Inside, the central hall, Panggung Sari, can accommodate 1,412 people seated, including 797 on the first floor, Balai Hadapan, 312 in the Balai Utama Grand Circley or second floor, and 303 on the top floor, Balai Peninjau. In the orchestra pit when it does not use it, you can locate other 98 seats. All seats are numbered with small lights on the floor that allow viewers to identify their seats.

Besides being a building with a particular architecture, the Istana Budaya notable for the high technology used in the development of its central scenario. This has four proscenium of 28x25metros that can be modified and adjusted to suit the needs of the function in minutes. On the front of the stage and hidden beneath it the pit is

In the lobby of the third floor becomes present the influence of Malay culture. This hall takes the form of a “slice ubi” or traditional drum.

The theater has several rehearsal rooms and is equipped with 30 spacious and comfortable dressing rooms for artists. The rooms are equipped with showers, security cameras and spaces for storing the locker room. Facilities also include a gallery of theatrical art, restaurants, orchestra rehearsal room, an office for use by groups of guests theater, discussions, and special spaces for relaxation and meditation.

The interior floors are covered with marble tiles Langkawi. For doors have been used tropical wood hand carved with motifs of flowers and leaves.

In the foyer entrance mats were placed in green tones corresponding to the “frangipani flower” and “beringin tree” reasons.

The many roofs of the building are covered externally with turquoise tiles features.

10 tables lighting control two VISION, which in 2005 were replaced by 10 February PHOENIX desks. 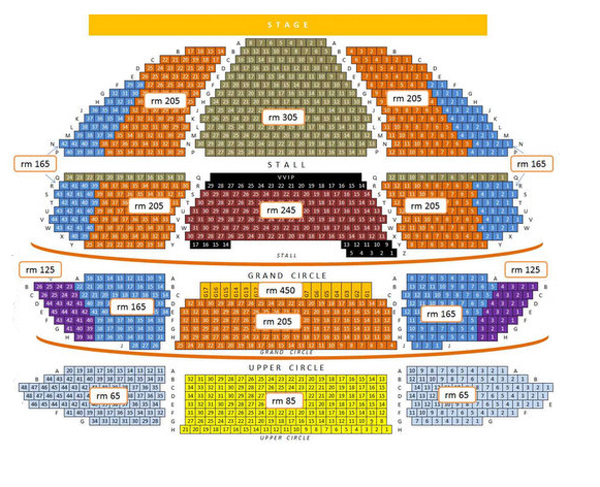 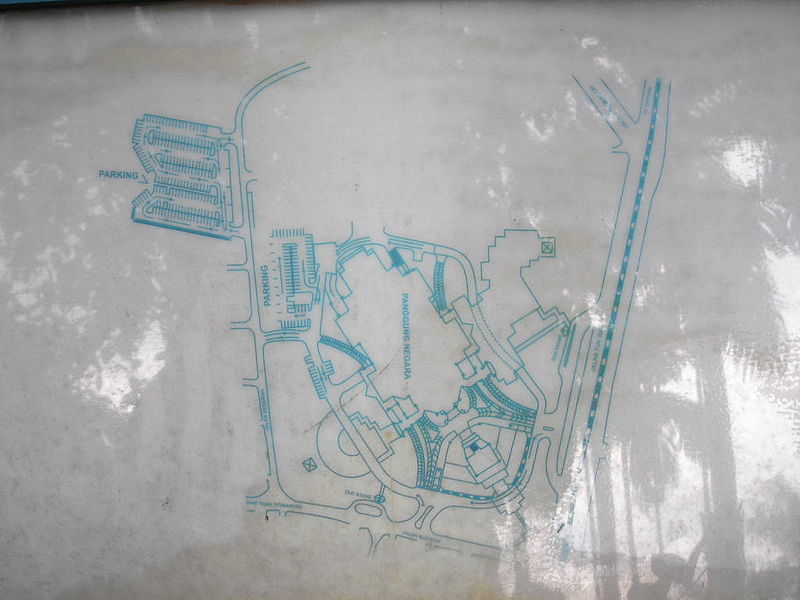 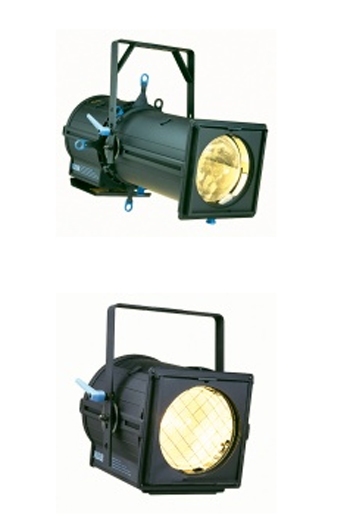 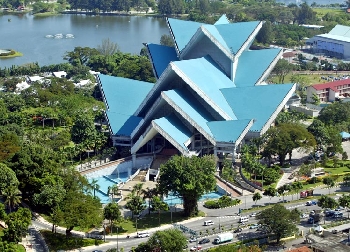 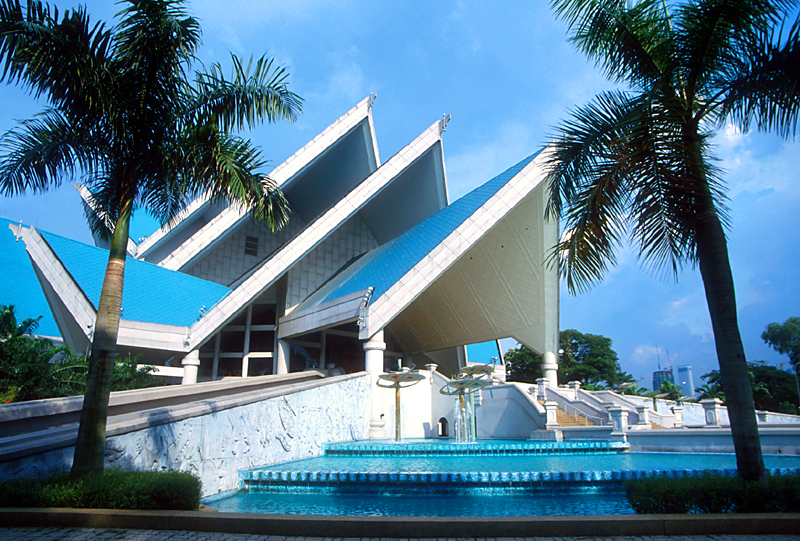 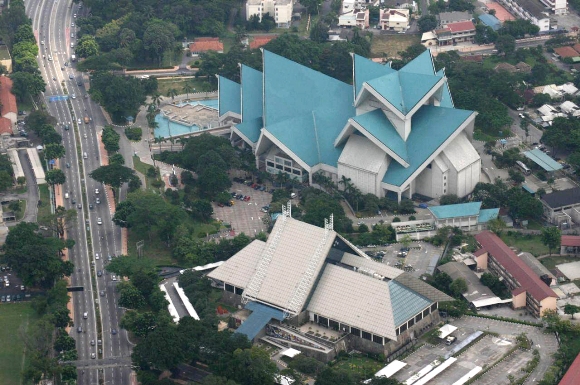 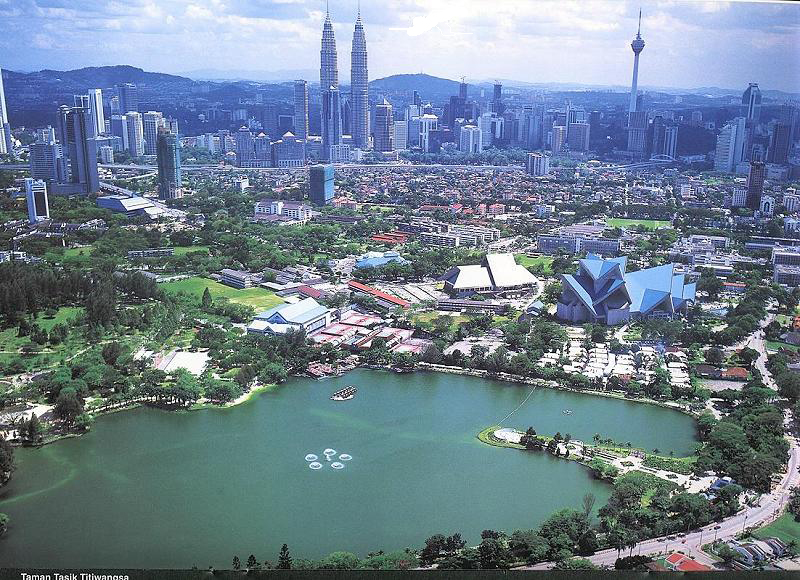 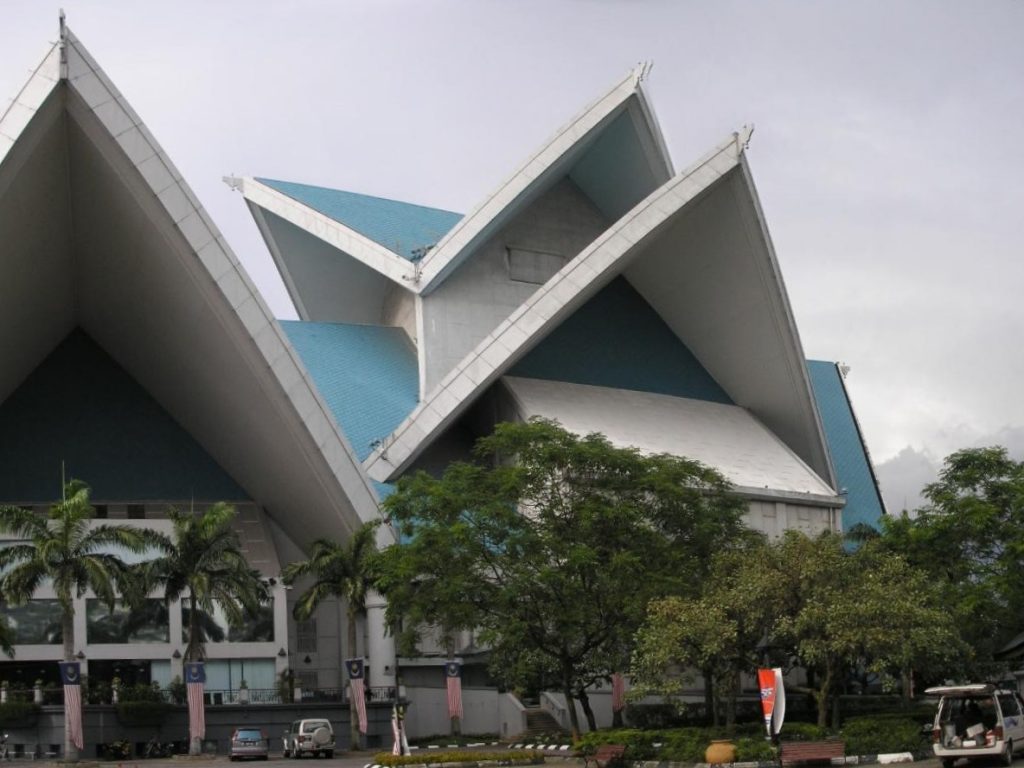 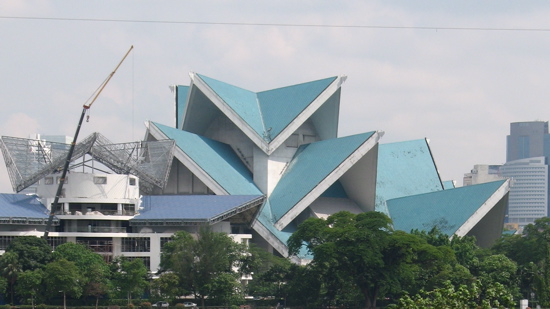 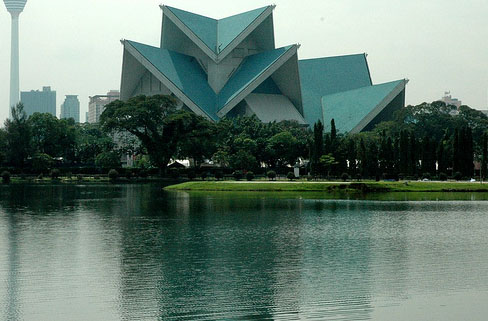 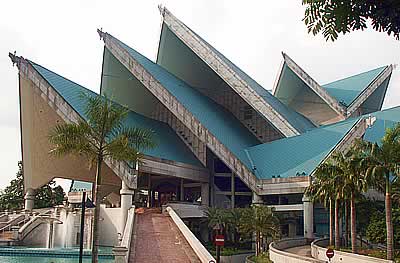 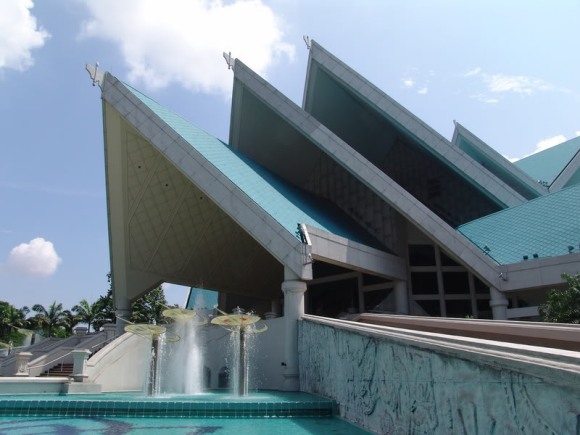 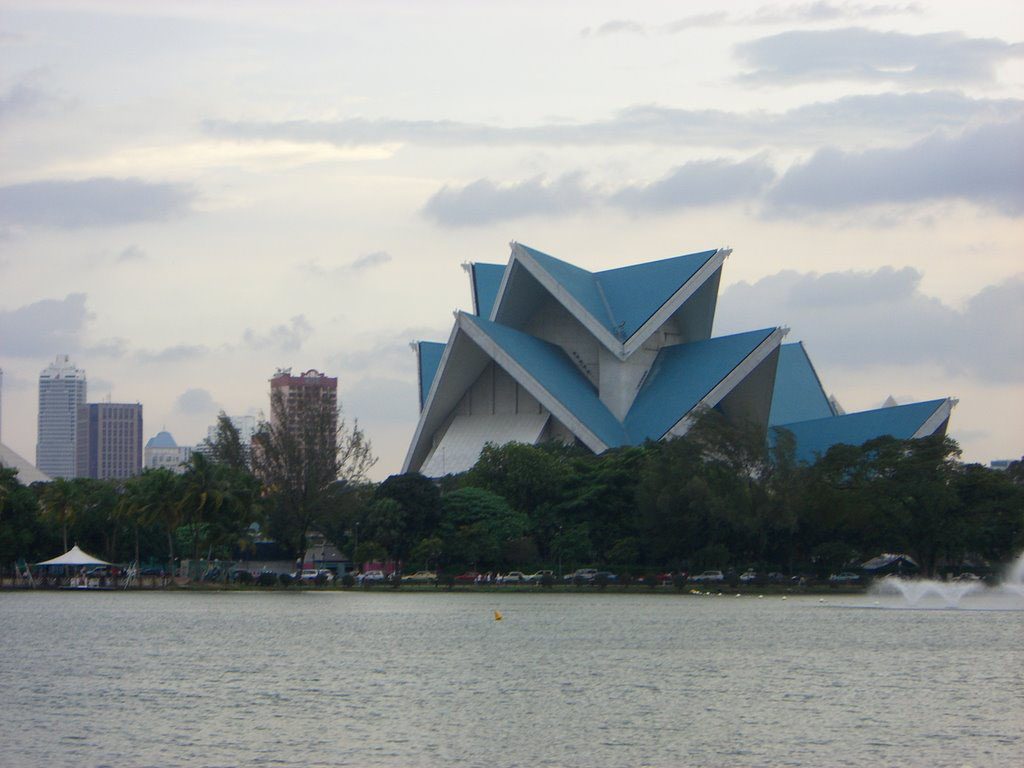 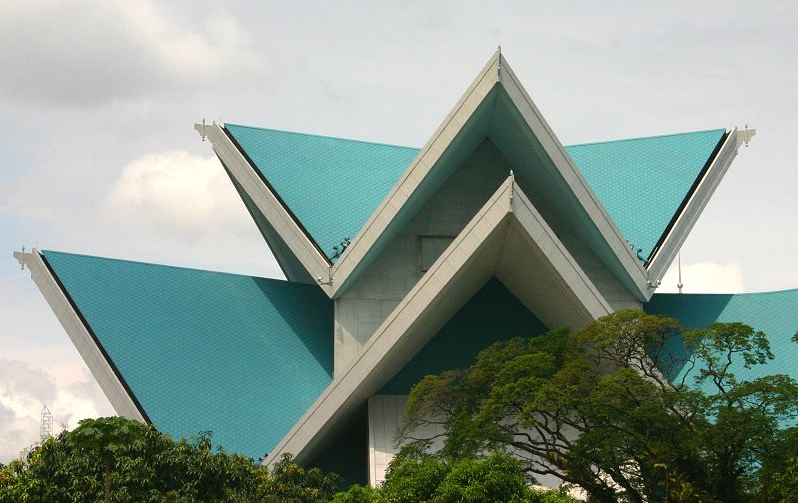 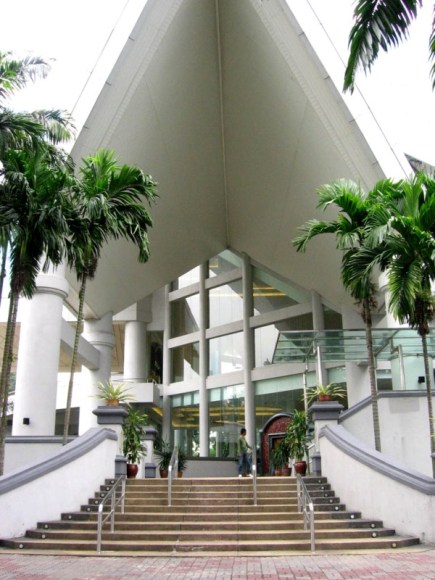 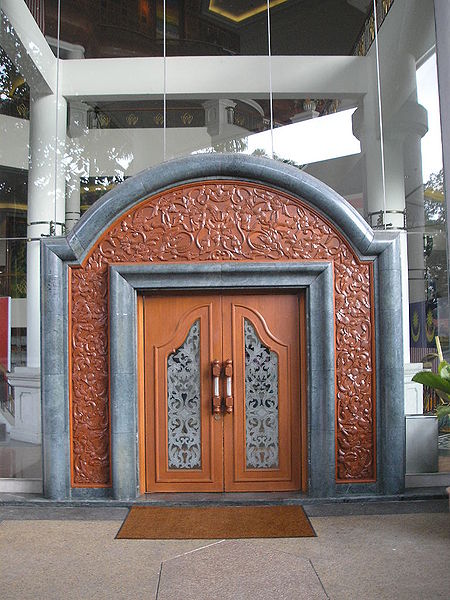 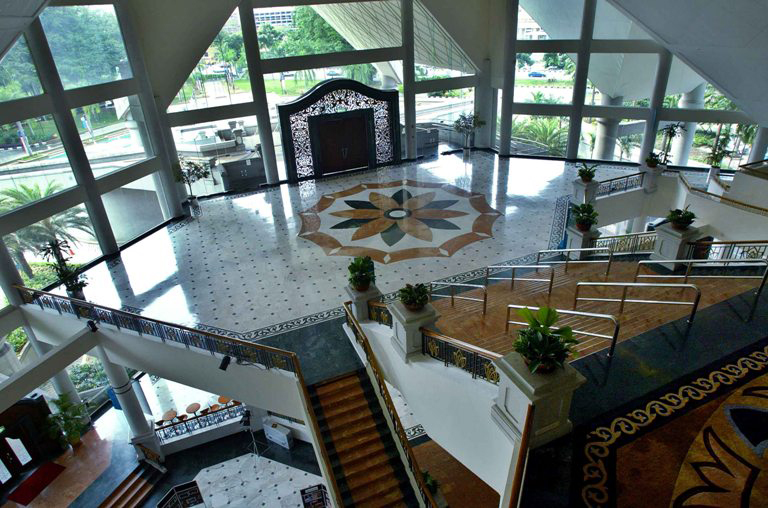 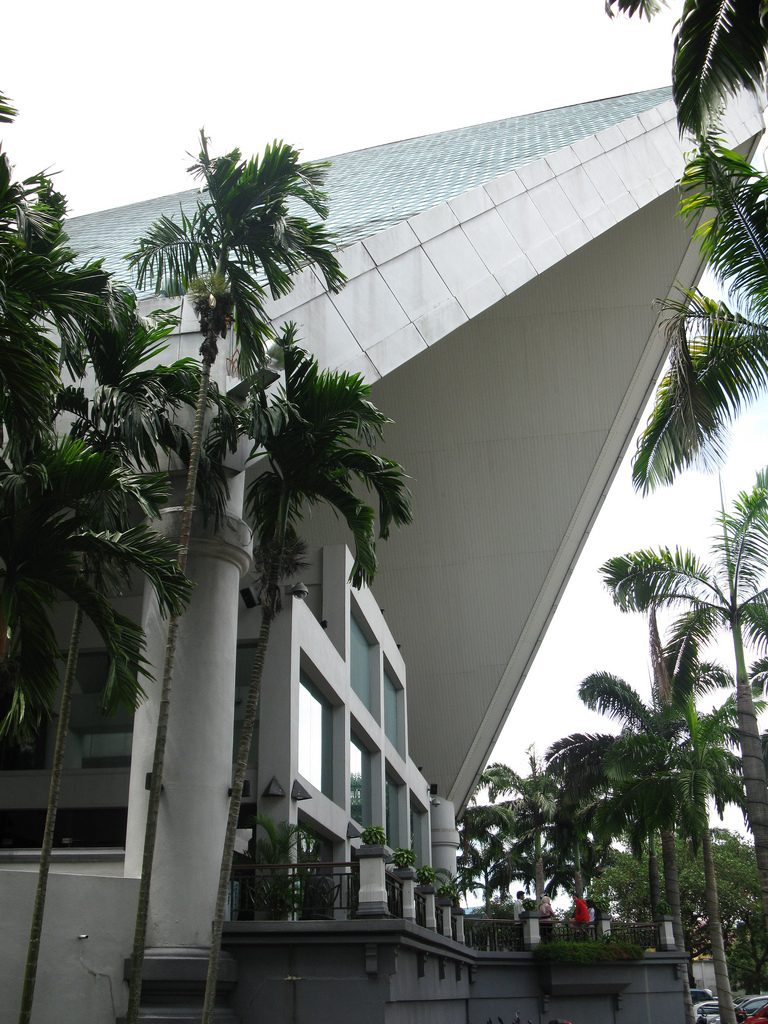 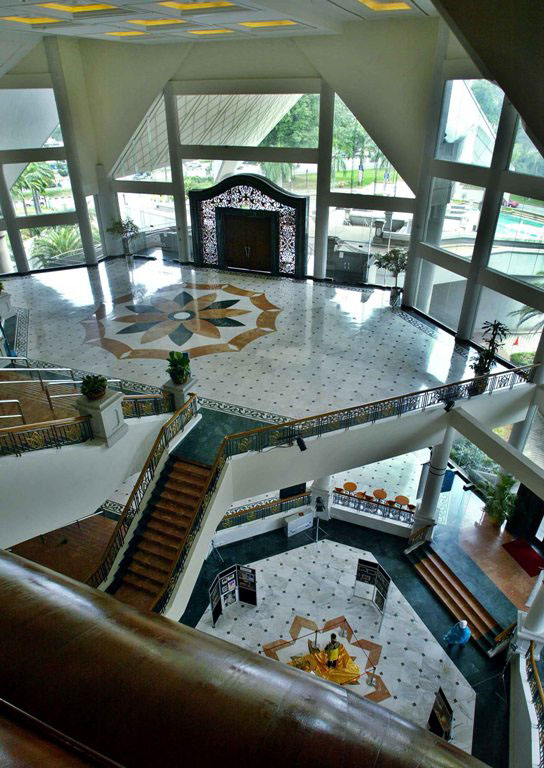 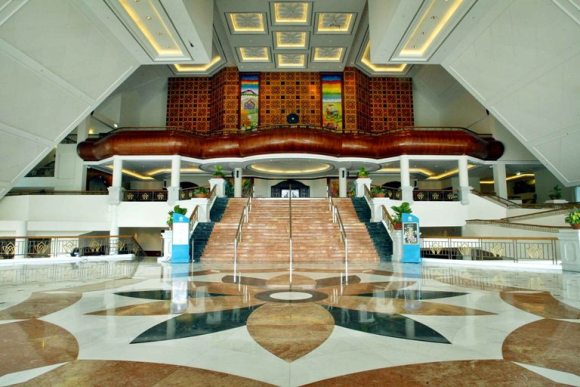 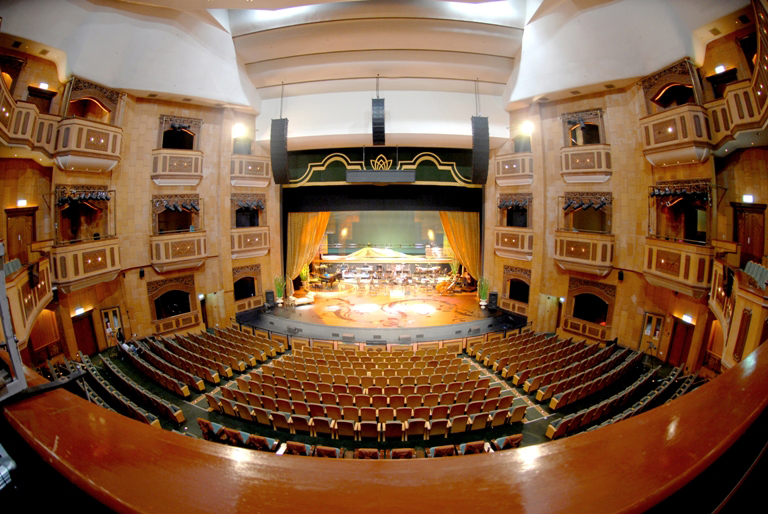 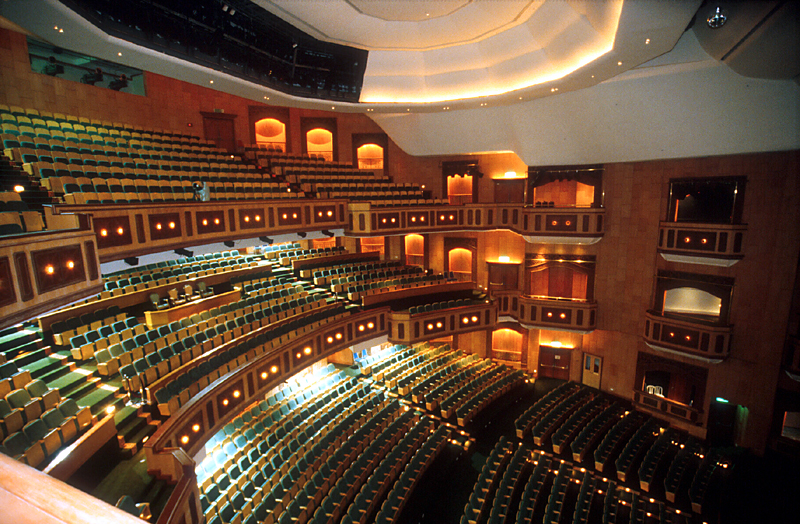 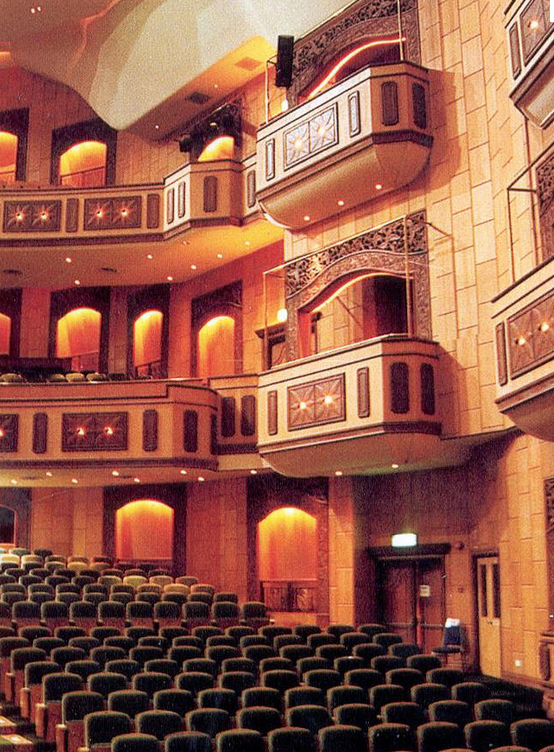 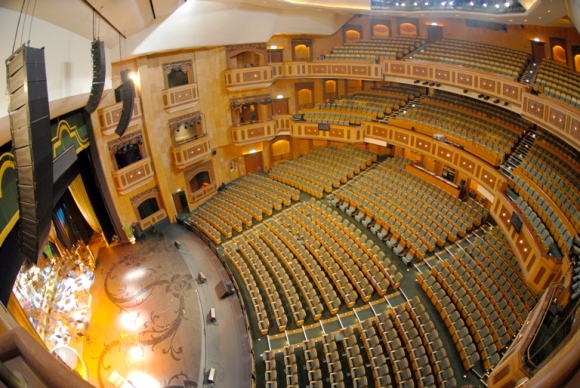 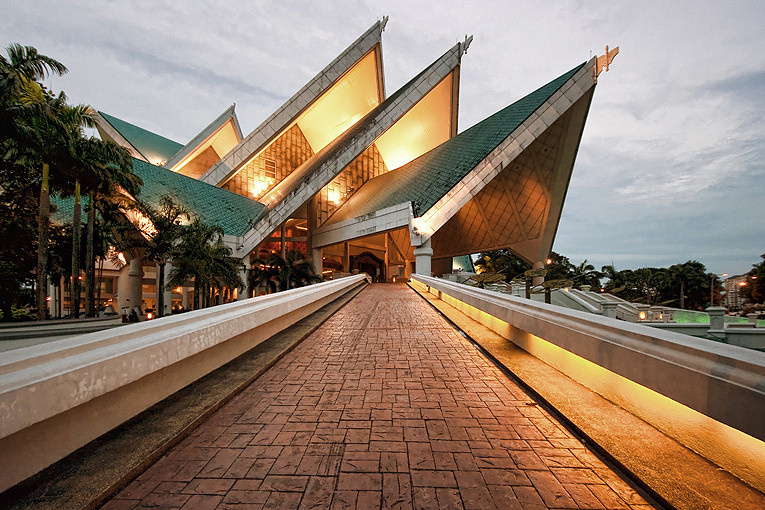 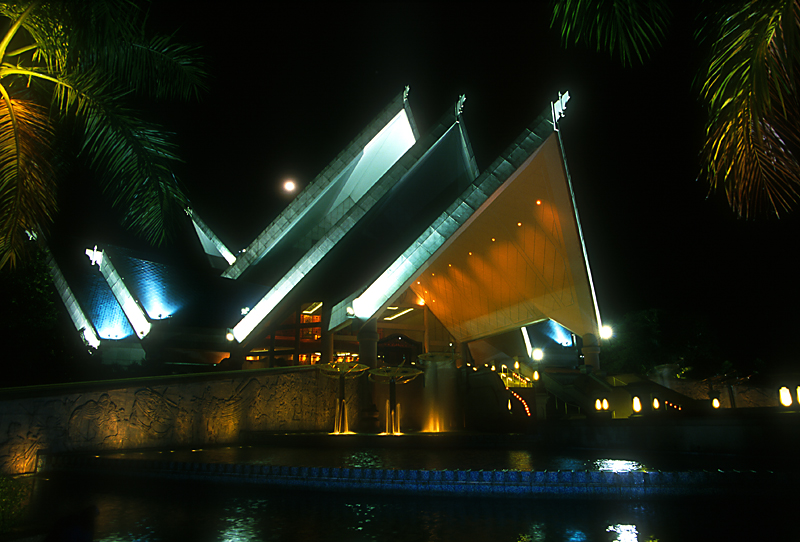 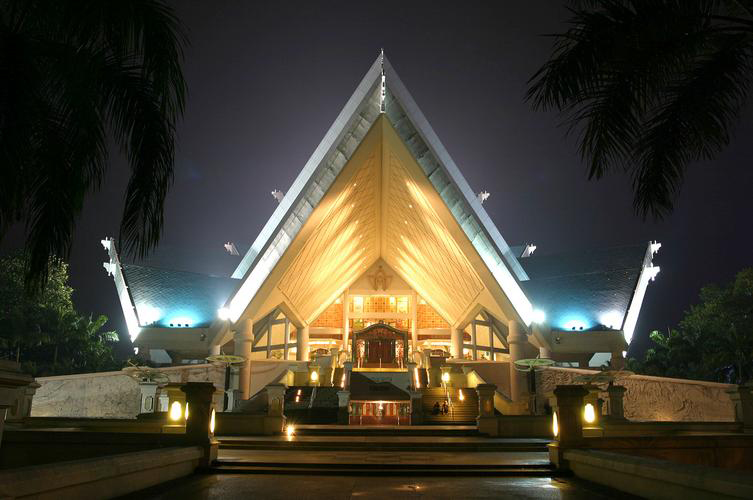