It is believed that Ortúzar Matias Errazuriz, a diplomat and later Chilean ambassador to Argentina, was presented to Le Corbusier in Paris. Le Corbusier in the early 1930s drew the summer house for the diplomat, who designed for the city of Zapallar, which would be home to live with his wife, Josefina Alvear.

The house project was completed in that year and was sent to Errázuriz to begin construction. They do not know exactly the reasons why the project did not materialize.

Later in the year 1931, La Maison Errazuriz appeared in the publication of “Le Archittecture Vivante”, it contained an article on the CIAM, besides mentioning five towns of Le Corbusier in which housing was. This inspired the Czech Antonnin Architect Raymond, who later in 1932, was to build a house in the city of Karizawa, Japan is very similar to that of Le Corbusier.

La maison was designed for a site that is on the coast of Chile and has generous views of the Pacific Ocean. The land had a very large slope as the first point to solve was the location of the project in the field and as desplantaría regarding foundations.

It was considered a stone base to fight the whimsical curves in place. Was raised a little way to reach the maison. The main facade overlooking the west, so that access is in the east in the central part of the house.

The project was never built in Zapallar, Chile, where it was originally thought. However if you built a similar project in Karuizawa, Japan

The design of this house comes in two versions, one that does not consider the slope of the land and another that does. Each has variations and is a set of preliminary sketches, as well as other material that was used during the six months that the house was developed Errazuriz. It incorporates elements strongly sloping roofs somehow interpreted as a typology of the local landscape.

Le Corbusier using continuous high ceilings, structure combined with piles of steel and concrete and stone as a basement. Can be distinguished part of the basement, a first tier contains most of the living room of the house and in a second floor with sloping roof, an attic is below the highest part of the roof.

On the ground floor is the most spaces: living room with fireplace, kitchen, utility room, two bathrooms, a room which is accessed by a bridge from the classroom.

To reach the top floor loft or better known, it is described on a ramp made of stone like the basement that houses a fireplace and under the rest of it, overlooking the lounge.

There are four sloping roofs in this project, two of them are in the kitchen and the room downstairs. And the other two are located where the living room. Le Corbusier retains its idea of double vertical spaces, are double pitched roofs and half-height or height in the living room, so it creates views various sites, from the sea to the scenic location.

The design of this project Le Corbusier was clear the use of stone. The raises both the basement and the chimney and part of the walls. The stone gives sufficient structural stability that comes from the foundation as well as being suitable for supporting the ramp that contains the fireplace on the ground floor of the house.

I also include the wood because in the southern part of America is very common use, and suggested a combined structural system in the maison. Concrete slabs supported by a bed of wood elements in attic and roof, while continuing with the structure dominated, so the main columns of reinforced concrete remained, but with some help from secondary structure of wooden columns to support.

As for the walls, Le Corbusier proposed to be covered brick mortar. The ramp with a fireplace is proposed that stone for stability and for being very suitable for heat.

The joinery is based on extruded steel profiles and railings and other motifs in the work.

The covers are made of reinforced concrete supported by a secondary bed but covered wooden elements on the outside of clay tile, which allows complete waterproofing. 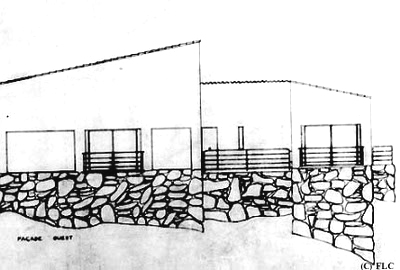 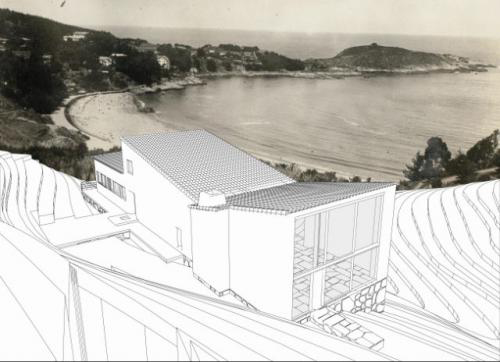 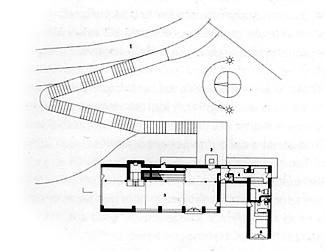 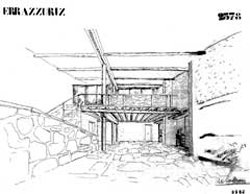 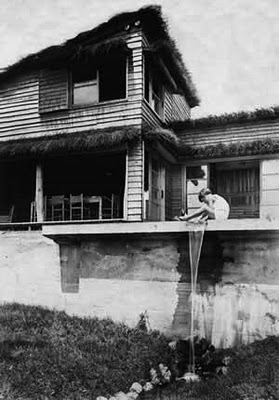