Luis Barragan House, built in 1948, represents one of the greatest contemporary architectural significance in the context.. It is a masterpiece in the development of the modern movement, in which a new synthesis and vernacular tradition, as well as various philosophical and artistic of all time. Luis Barragan’s influence in the international architecture continues to grow day by day, and his house, kept faithfully as its author lived until his death in 1988, is one of the most visited sites in Mexico City by architects and art connoisseurs worldwide. This museum, which includes the residence and the architectural workshop of its creator, is owned by the Government of the State of Jalisco and the Foundation for Architecture Luis Barragan Tapatio.

The home study Luis Barragan stands on the numbers 12 and 14 of General Francisco Ramirez Street in Mexico City.
The choice of this small street in the old neighborhood of Tacubaya is itself one of the first statements in the manifesto of this work. We talked about a neighborhood that, despite the pressures of urban development, the fight today to preserve something of his character.

The neighborhood was made up of modest houses and small-scale traditional types of housing collective popular in Mexico City: the neighborhood. Complement this proximity to shops offices, grocery stores, distributors of building materials and funds.

At home it only sought to develop an environment of personal taste, trying to take traits from both the architecture of the old convent of Mexico, and that was at once an expression of contemporary architecture.

The strong sense of the limit set is facing toward the street for the first settled area of the house. The access you have a small light yellow stained glass by a reinterpretation of a traditional space. That caused the pause that precedes the Mediterranean or Mexican home to monasteries or convents.
The goal serves as an overflow area and at the same time, as a place where the senses are prepared. These are placed on a state waiting for the direct action of a palette of materials needed, low variants, but generous with wood, and stone walls.

This second door separates the shadows of the golden goal in the light of the lobby, which is produced by a reflex mechanism. From outside the yellow, the light falling on a gold surface of a Baroque altarpiece and after bathing in the bright pink walls.
The experience of color can also be read as a complementary sequence. In this way the yellow amielado goal of saturating the pupil to receive the pink that is, in turn, catalyst preparation and, if we open a door and we asomamos toward the dining room window that has the intense green background shaded garden.
The architecture of the twentieth century had already exploited the box walls to display a space bounded by solid or transparent planes are based on space. In this hall, however, the light turns to fill a space that can be described as if it had been carved in the white matter of the walls, a substantially different way of building.
Ascending a ramp behind the wall, there is a second space on the lobby where there is a separate dressing room visually by walls that do not reach the ceiling to give continuity to the entire height. It is a fluid, modern. What is not in any way contradicts the fact that an ancient carving.

The transition to stay-library resources that will be achieved through constant along the route. An accent of scale, as a contraction, and its consequent shadow moving front and never live, but forced a stream that guideline concludes with a new expansion space, air and light.
The west facade of the house is distinguished from the border almost impenetrable facade to the street not only for his share of futile, but also in its design as a dialogue mechanism in the house with his garden.
This is the case with the large window in the room. Through this facade accompanies the nature and causes life experiences that occur inside. Opposite the garden with him, is the stay. Again industrial materials are absent in the design of everyday objects. We have only solid wood, leather, wool and vegetable fibers.

The stay of the first places in this splendid double-height living room where the library. This large flow space has been divided into precincts up through the introduction of several layers of walls to half height.
Between two flat whites at medium altitude, has formed a working place for the library where he kept a thick wooden table.
This corner wall reappears low tangential to a journey that begins to draw, now spiraling up front to meet the famous staircase in cantiliber boards. An abstract splits easily and contrasts with the solidity of the stone staircase in the lobby.
Here is a proposed minimum synthesis of the ladder that comes from the same material to which the door is designed in a single gesture plastic

From the dining room, reached off the ground vegetation to add more color in the composition.
This place is a reference to the obligation of the central figures in the artistic development of Luis Barragan. It is Jesus Reyes Ferreira, appears in the maturity of the master architect Barragán accurate taste of the key lessons that come in color and composition.
Breakfast in the window rises again and no longer has a clear front. The garden is then as an escape from the top prospect in a place, probably the most intimate of the house, where you have to protect the eyes from walls.
In the kitchen, spacious and well lit, the garden appears only when you open the door. Translucent glass show window of a hierarchy here is very different from those described above.

This and the two rooms of this second level are common monastic spirit, not only for the economy of resources with which they are resolved, but even the selection of furniture and textures
None of these rooms appear, as it has not done throughout the house, except breakfast, and artificial light zenithal uniform.

On the second floor of the garden view room is reserved for the architect’s room and eventually “fourth white” as he called colloquially. These are accessed by a new valve space, now yellow, which concentrates the light of the morning from the lobby to take her inside the bedroom

It is a place that shares its lobby with the same fluid and complex spatiality. The dressing is an invitation to discover the terrace going through a vertical fissure, a solid yellow light on the looming just three tiers of wood whose dimensions suggest a rise meditative, solitary.

It is an abstract composition of paraments nude color that functioned as a laboratory and whose architecture is both evocative and unusual.
On the terrace is where the true outcome of the complex construction and poetic space of the house.
From a simple wooden banister allowing overlooking the garden, the walls were raised to complete introspection.
Furthermore, multiple color variations that are no longer tracks Barragán makes exploration of the interaction between color spaces built.
The search for the origins from which the roof has developed multiple becomes: can be found in the Muslim tradition of living roofs or those locations open for excellence in urban development and even the concept announced by Le Corbusier modern facade of the fifth 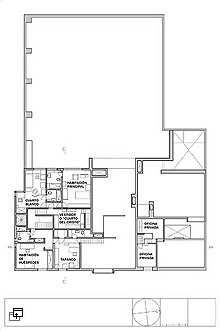 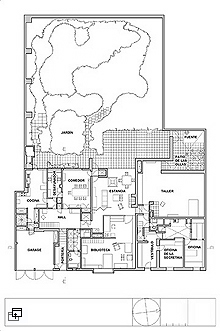 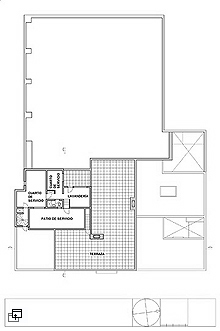 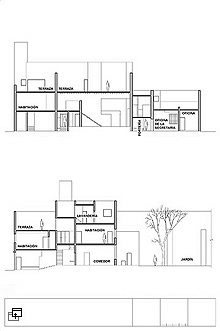 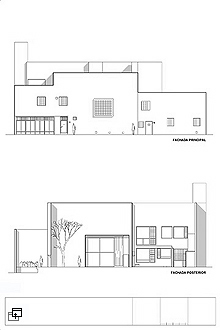 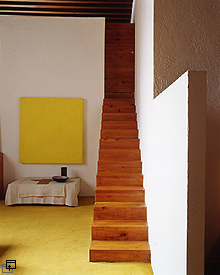 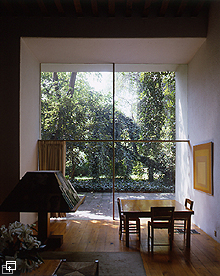 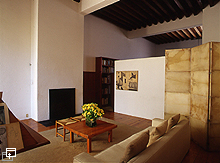 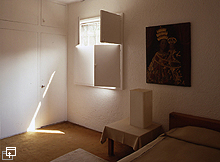 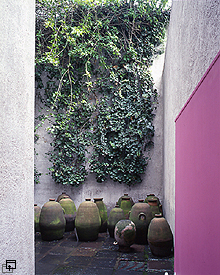 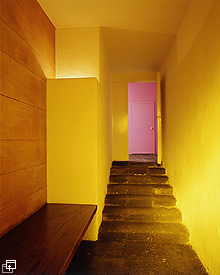 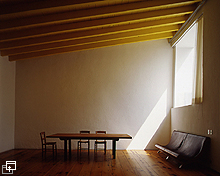 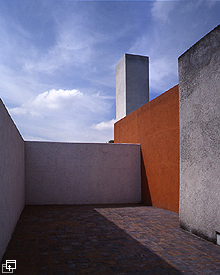 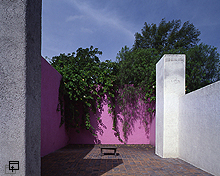 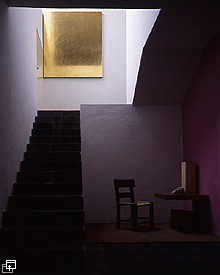